Tour Stage 21 Report: The final day of a most exciting Tour de France followed its usual pattern of media moments and a bunch sprint finish. As the rest of this Tour the speed on the Champs-Élysées was eye-wateringly fast. At the line it was Jasper Philipsen who took his second stage win. Jonas Vingegaard crossed the line with his teammates, safe in yellow.

The final kilometre of stage 21 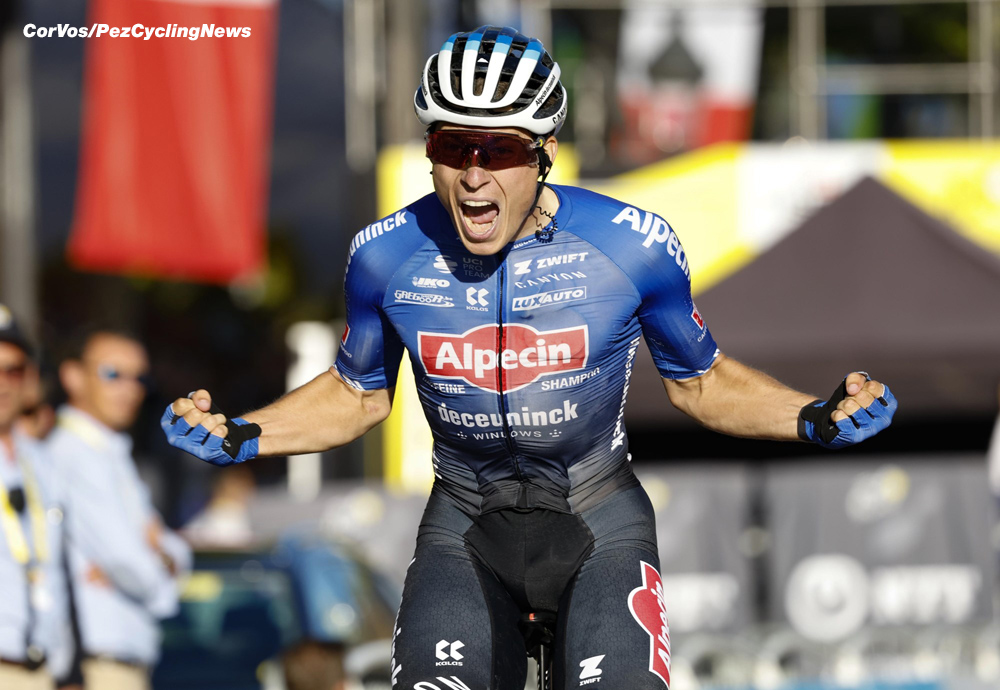 The 2022 Tour de France was won by Jonas Vingegaard. The Danish leader of Jumbo-Visma, who seized power on the stage to the Col du Granon, crossed the finish line on the last stage in Paris in the peloton to take his first overall Tour win. The stage victory on the Champs-Élysées went to Jasper Philipsen, ahead of Dylan Groenewegen and Alexander Kristoff. 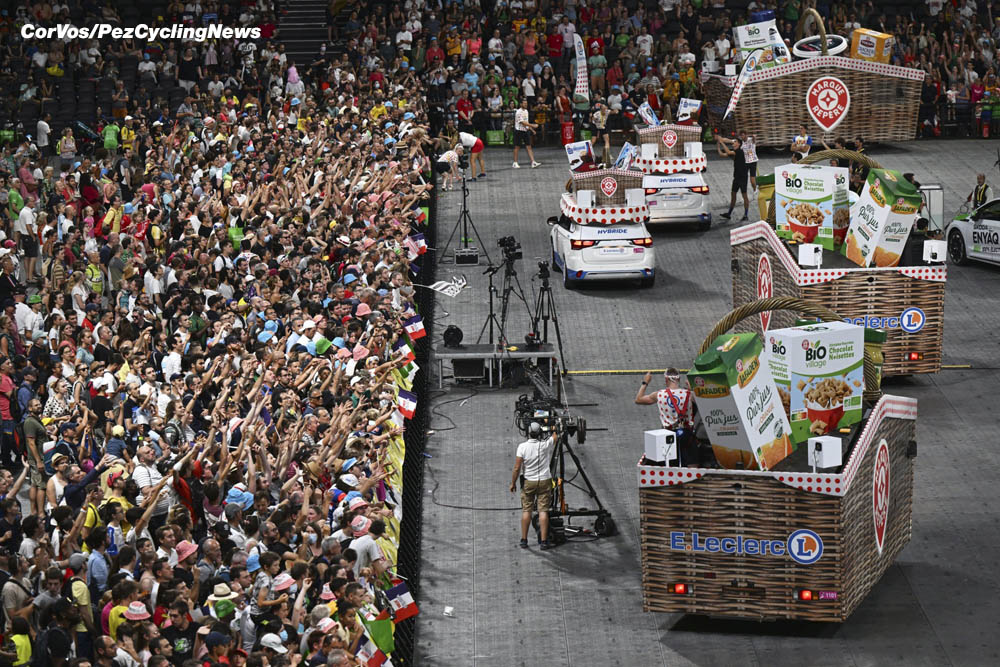 The start in Paris La Défense

Tour boss, Christian Prudhomme: “The Champs-Élysées, the traditional finishing point for the final stage of the Tour de France since 1975, will be the setting for an unprecedented double-bill, hosting not only the prestigious finale of the men’s race but also the start an historic women’s event. Prior to the Tour’s grand sprinting finale, the first stage of the first edition of the Women’s Tour de France with Zwift will be held on the final circuit in the heart of Paris.”

After the start in the Paris La Défense stadium, the green jersey, Wout van Aert had a plan in mind with yellow jersey Jonas Vingegaard and white jersey Tadej Pogačar. The three attacked immediately after the flag dropped, but for the three top riders of this Tour it was just a laugh. 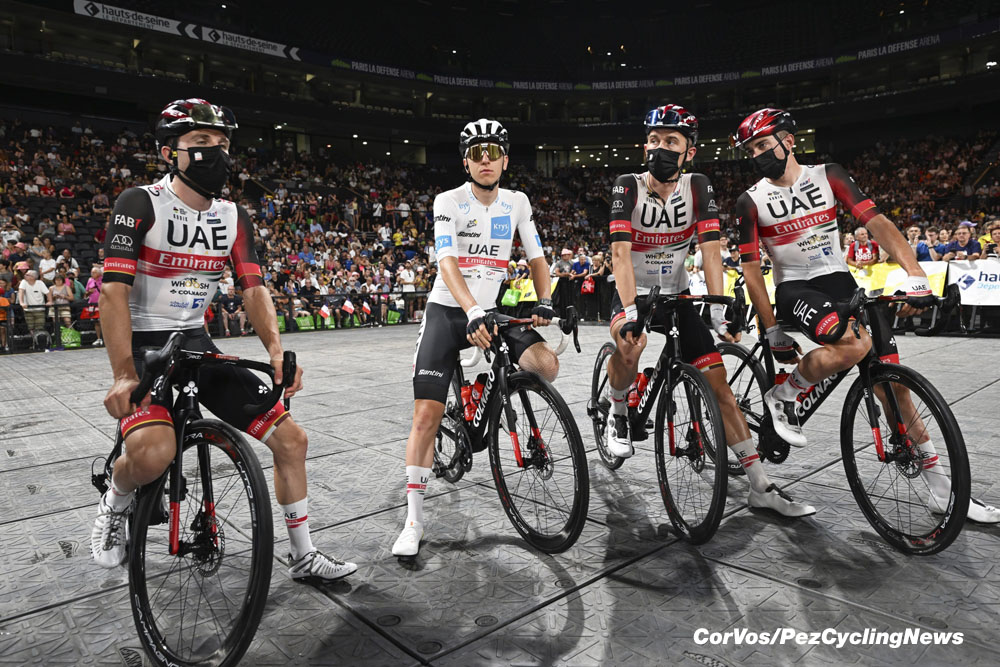 Second overall, Tadej Pogacar with his UAE Team Emirates teammates at the start 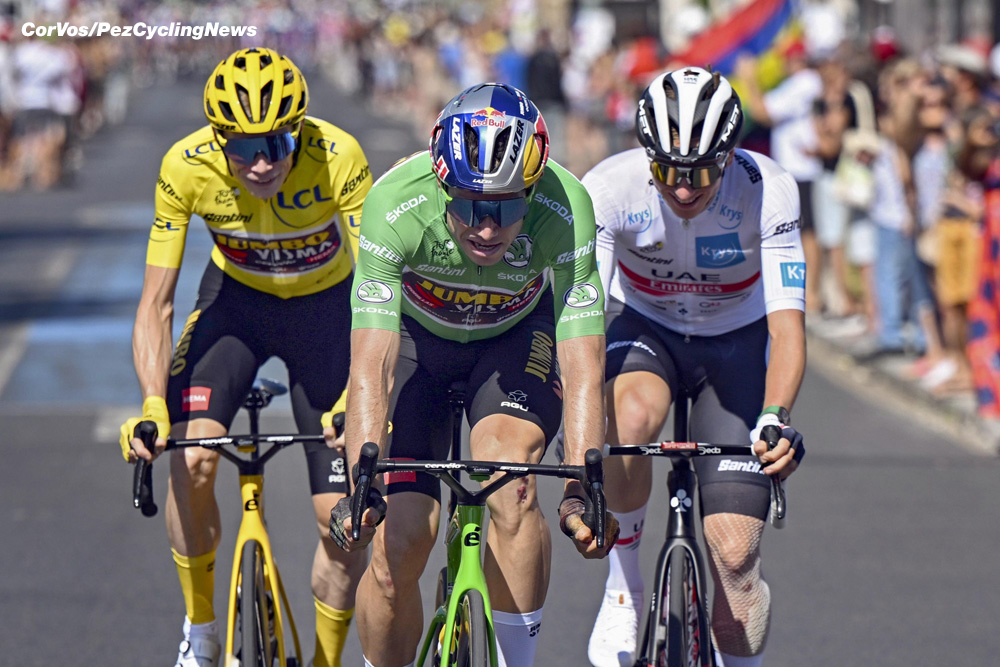 An early attack from the leaders

Then the well-known scenes of chatting riders, photo opportunities for jersey wearers, and of course the champagne moment with Jumbo-Visma. There was also a mountain point to be won and Simon Geschke, the wearer of Jonas Vingegaard’s polka dot jersey, was allowed to take it. 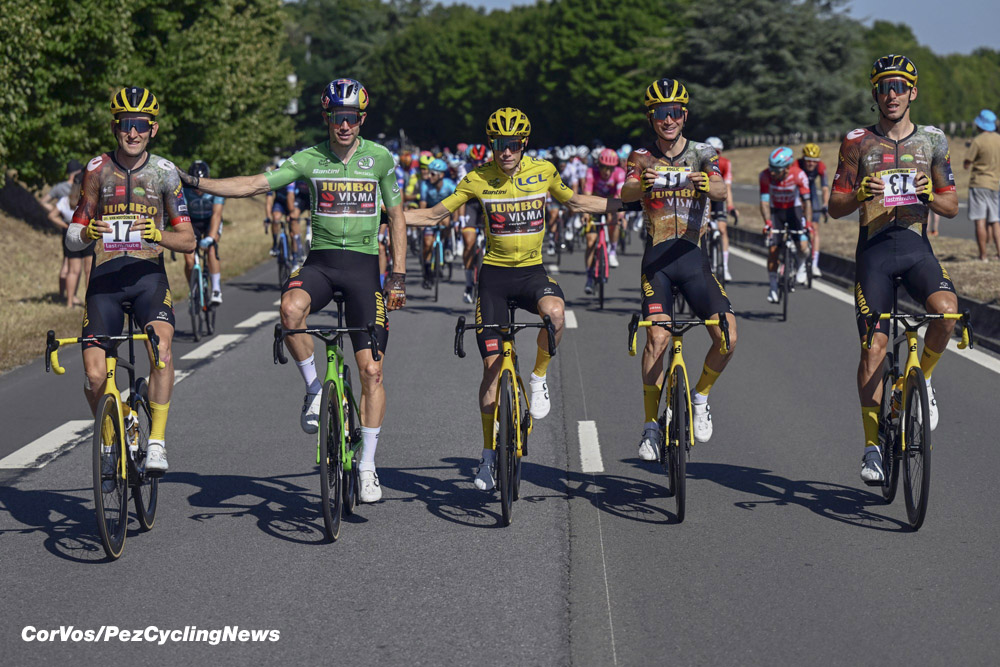 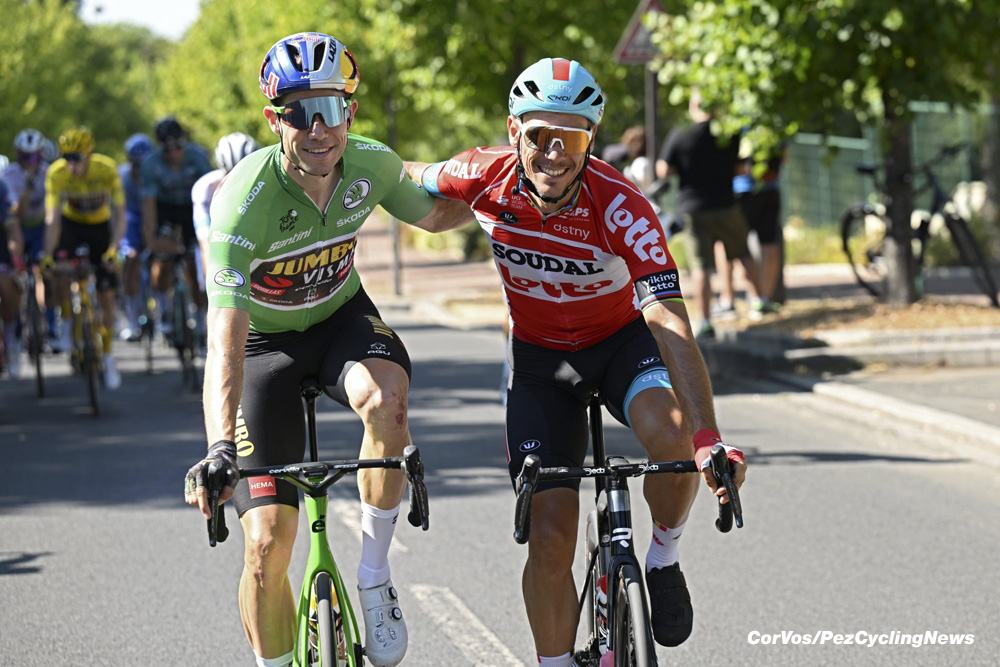 As the Champs-Élysées approached, the pace was increased a bit by Sepp Kuss and Tiesj Benoot. The Jumbo-Visma team took the lead around the Louvre Pyramid, after which it was not far to the large boulevard in the centre of Paris. Jonas Vingegaard’s team got a chance for a photo opportunity, but after that it was immediately top speed action. 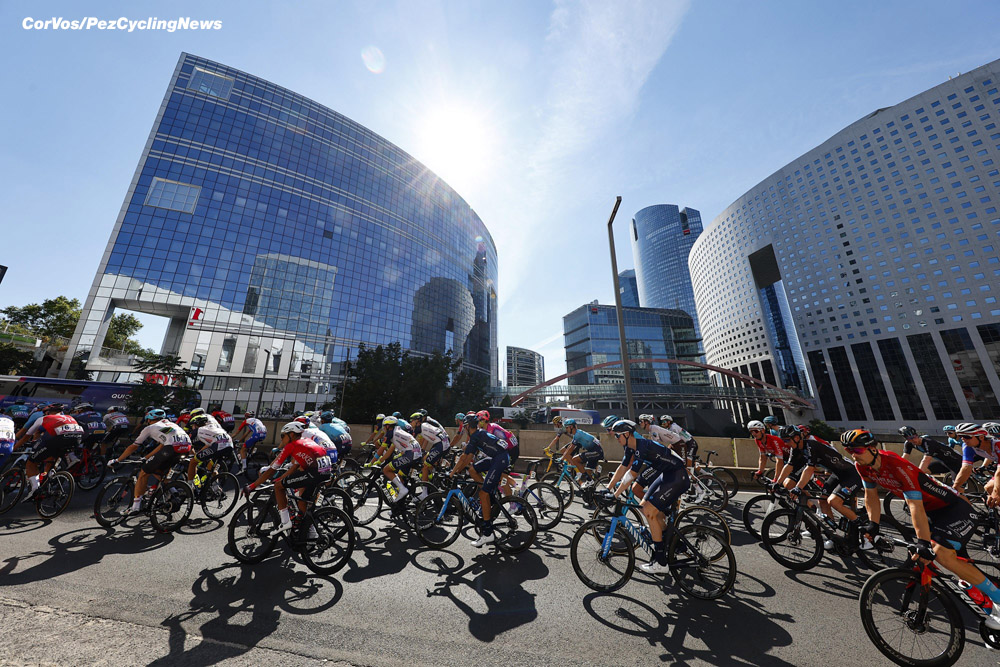 Not the nicest part of Paris

Jonas Rutsch was the first to attack together with Jan Tratnik, but they didn’t get away. A group with Nils Politt, Krists Neilands, Benoît Cosnefroy and Pierre Latour was also quickly pulled back. It was the sprinter’s teams that wanted to take control, but Stefan Bissegger, Stan Dewulf, Jan Tratnik, Mathieu Burgaudeau, Daniel Felipe Mártinez and Matteo Jorgenson were able to pull away. 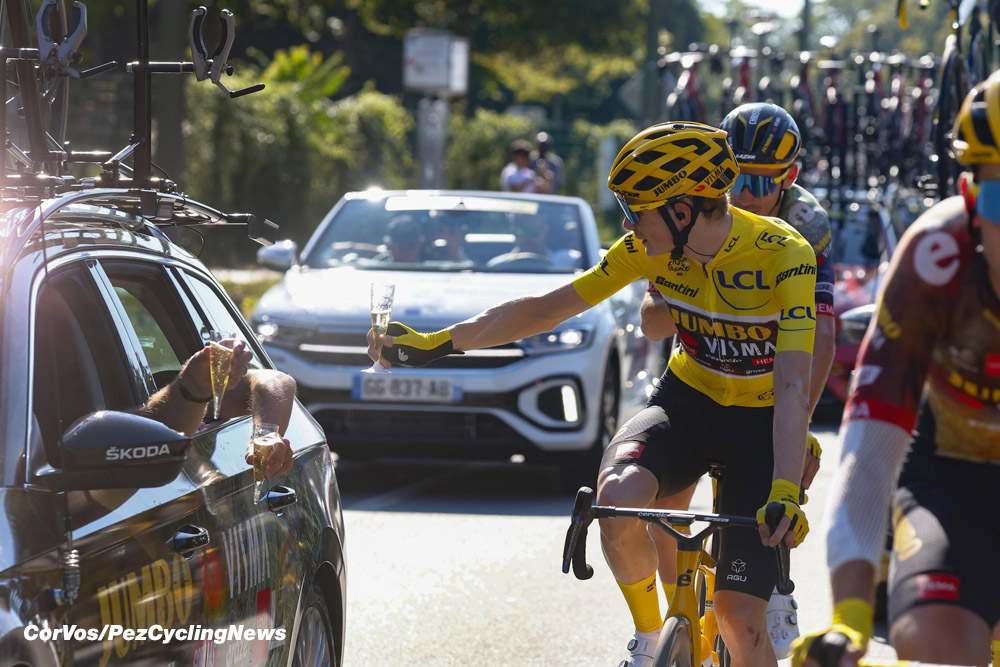 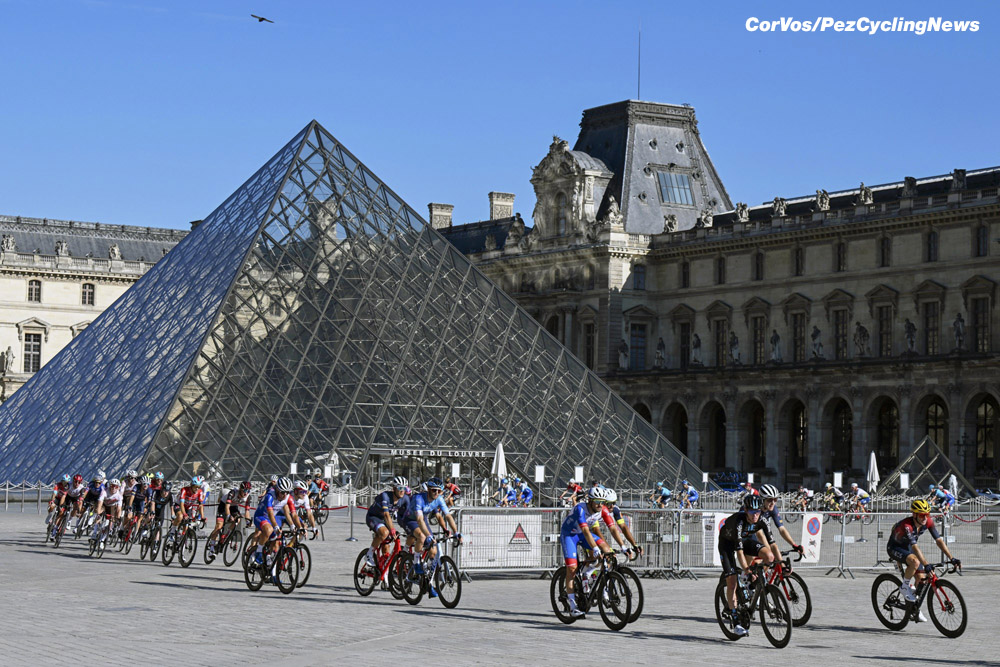 At the only intermediate sprint on the Champs-Élysées, green jersey Wout van Aert was absent for once, due to a toilet break. The pace in the peloton hardly ever slowed and the teams of the sprinters gave little room to the breaks. Rutsch, Owain Doull, Maximilian Schachmann, Antoine Duchesne and Olivier Le Gac did manage to grab a gap of 22 seconds. 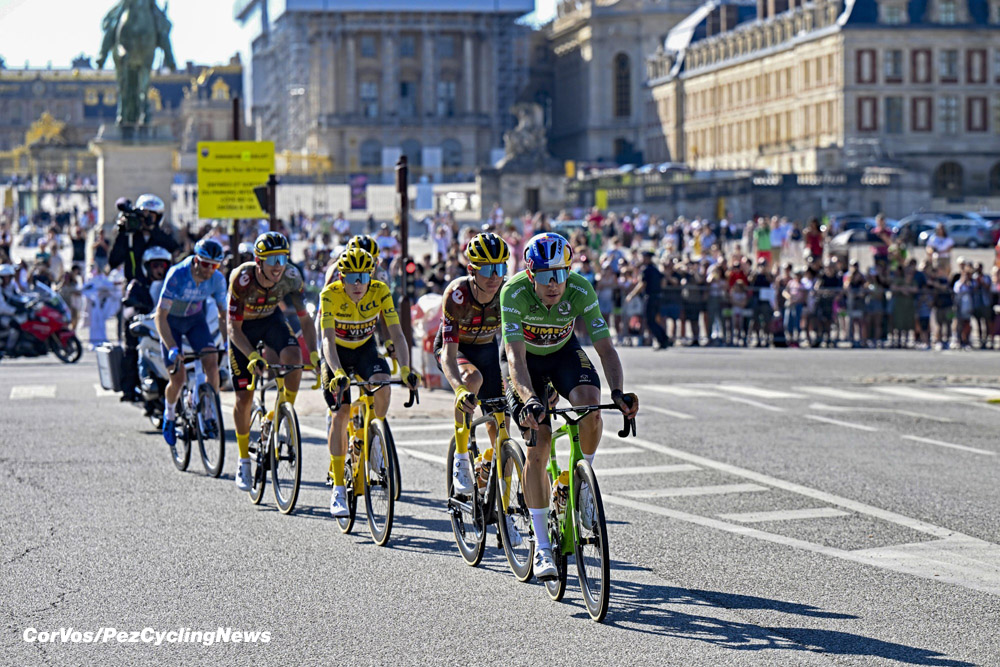 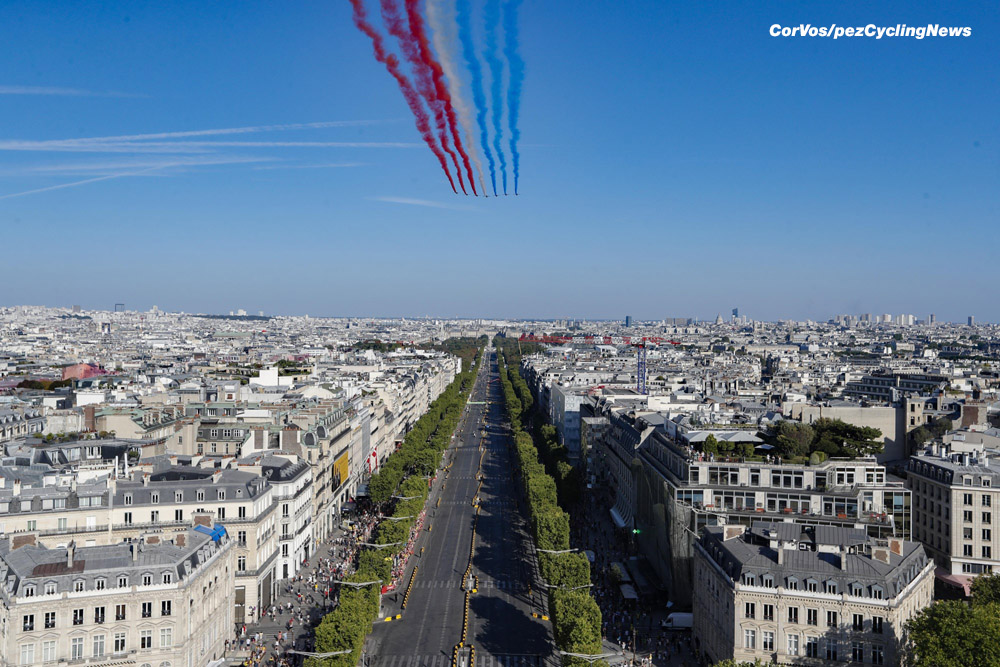 The French airforce doing their ‘thing’

DSM, Lotto Soudal, Quick-Step Alpha Vinyl and Alpecin-Deceuninck put men on the front to bring back the five. Rutsch and Schachmann survived the longest and were only caught 6 kilometres from the finish. There was still a lap to race on the Champs-Élysées. Coming up the ‘climb’ to the Arc, Tadej Pogačar attacked on one side of the Champs and Geraint Thomas on the other with Filippo Ganna in his wheel. 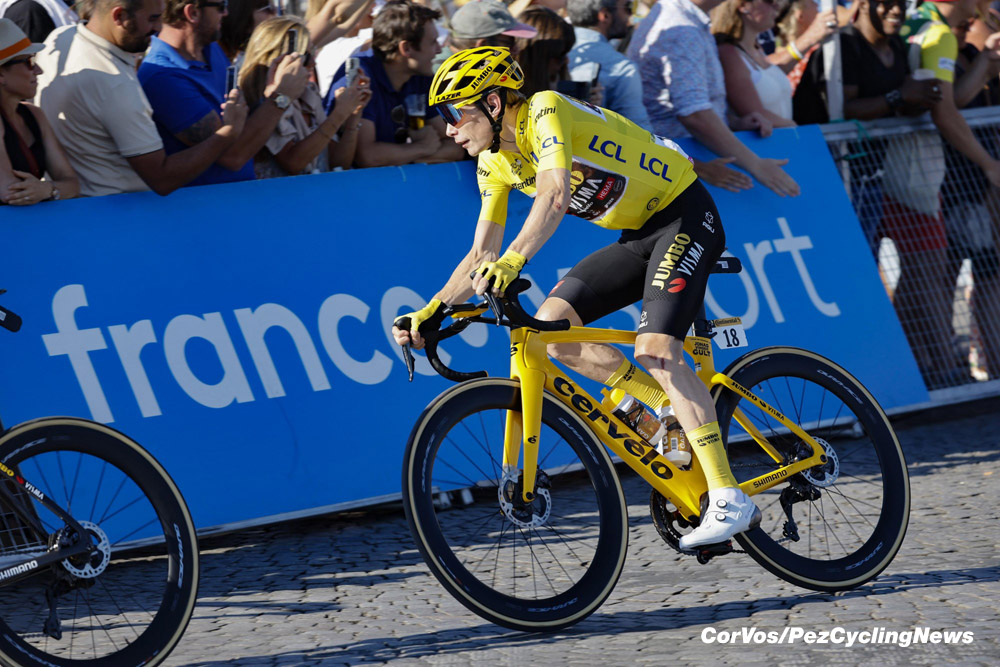 All yellow for Jonas Vingegaard, except shorts

They stretched out the peloton, but couldn’t get away. Then it was the sprinter’s teams who took control for the last 3 kilometres. The Jumbo-Visma team could not be seen at the front; the yellow jersey, the green jersey and the three remaining teammates gathered at the back of the peloton to cross the finish line together. 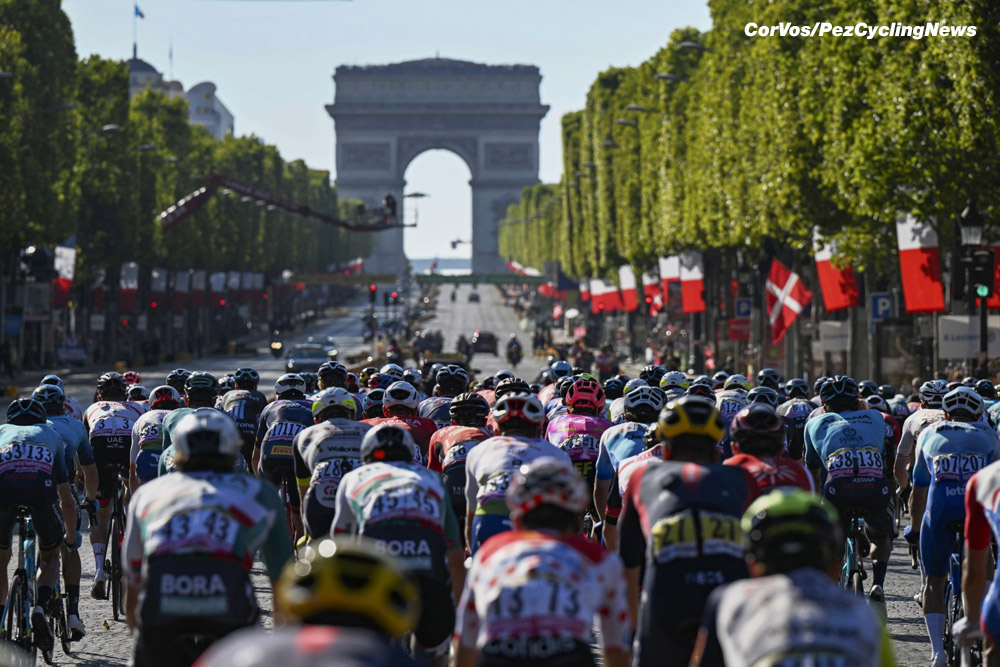 The view up the Champs-Élysées

Dylan Groenewegen had an excellent lead-out from BikeExchange-Jayco, but he hit the front too early. Jasper Philipsen jumped off Groenewegen’s wheel and won the sprinter’s stage by a bike length. The Groenewgen was still second, ahead of Alexander Kristoff. Jasper Stuyven was fourth and Peter Sagan fifth. Fabio Jakobsen was not involved. 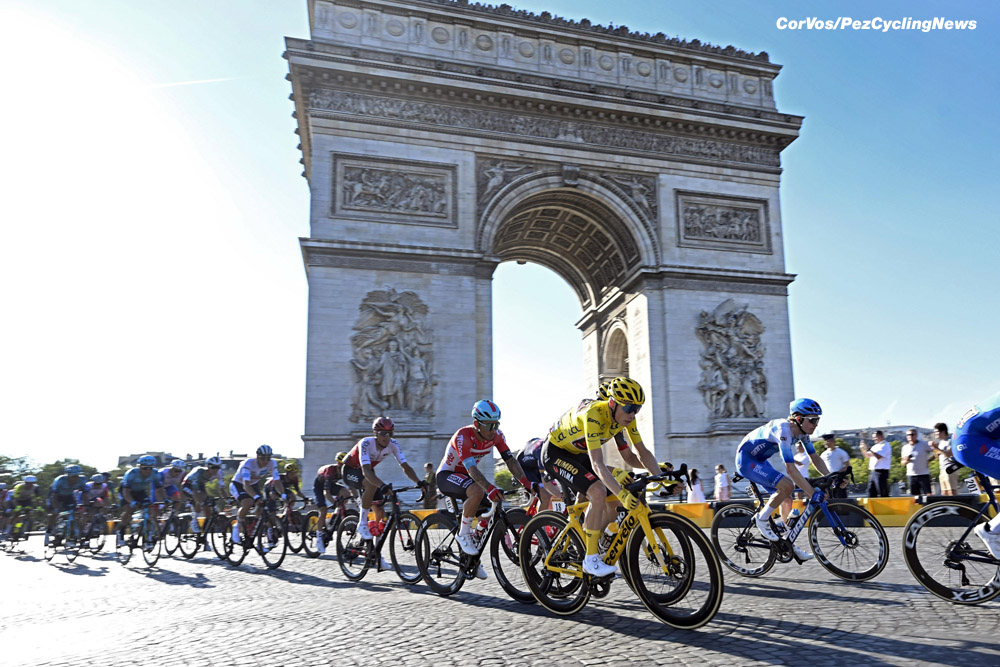 Jonas Vingegaard crossed the finish line safely in the peloton and received his final yellow jersey as the overall winner on the general classification and the mountains classification. Tadej Pogačar and Geraint Thomas also took to the podium, as final second and third. Wout van Aert had been certain of the green jersey for days and won the Prize for Super Combativeness, while Pogačar was the best in the young rider classification. 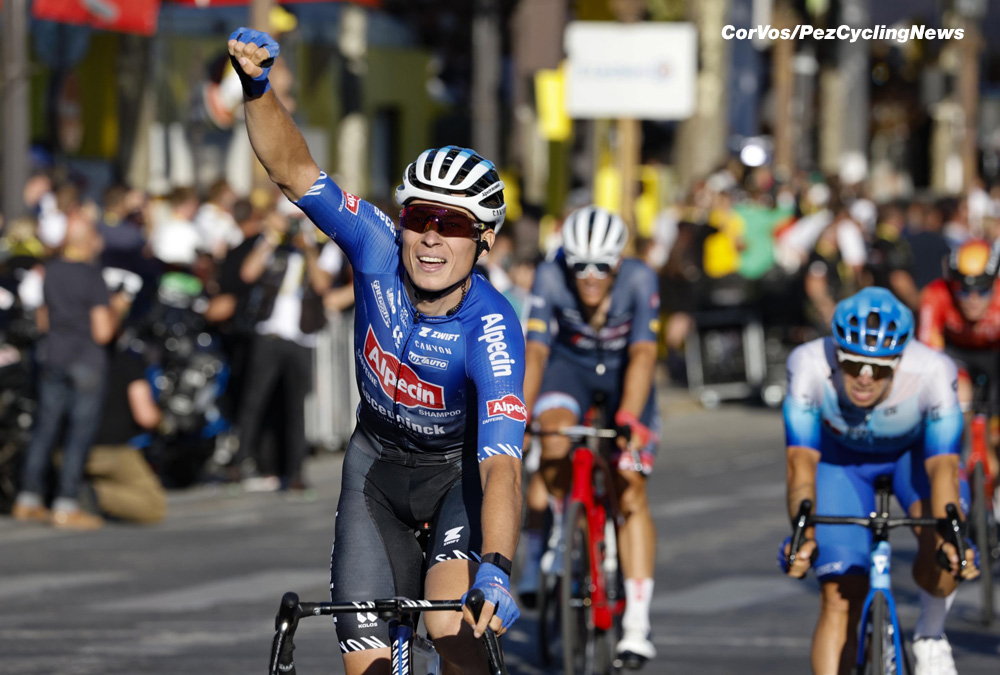 Stage winner, Jasper Philipsen (Alpecin-Deceuninck): “I cannot believe it. It’s a childhood dream coming true. It’ll take a while to realise. I’m super proud of my team. It’s wonderful to finish the Tour like this. The sprint went ideally for me. I was in a great position. Dylan Groenewegen launched very early. I could stay in his wheel and I could sprint how I wanted. It’s fantastic to win on the beautiful Champs-Elysées. We were disappointed earlier in this Tour, it did not go the way we wanted. But winning stage 16 and now stage 21, the most beautiful for a sprinter, it’s unbelievable.” 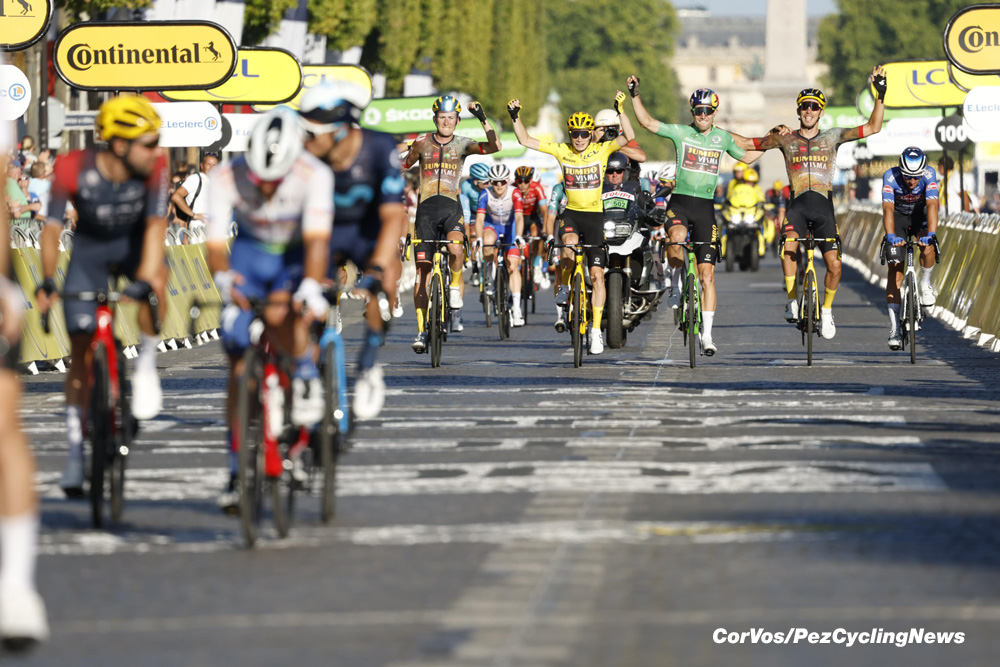 Final overall winner and KOM, Jonas Vingegaard (Jumbo-Visma): “It’s just incredible, I mean I finally won the Tour. Nothing can go wrong anymore. I’m sitting with my daughter. It’s the biggest bike race of the year and I’ve won it! Nobody can take it away from me. I always had the feeling that I could at least fight for the win, but at the end, Hautacam is the place where I thought I’d win unless something goes wrong. So many Danes arrived here to see me ride in the yellow jersey. I appreciate it so much. They’ve been cheering for me for three weeks. I’ll go to Holland to celebrate. On Wednesday I’ll be in Copenhagen, on Thursday to the town I live in, and on Friday I’ll be on the couch. Of course I’m happy about my victory. I want to celebrate and relax but I also want more at the Tour de France.” 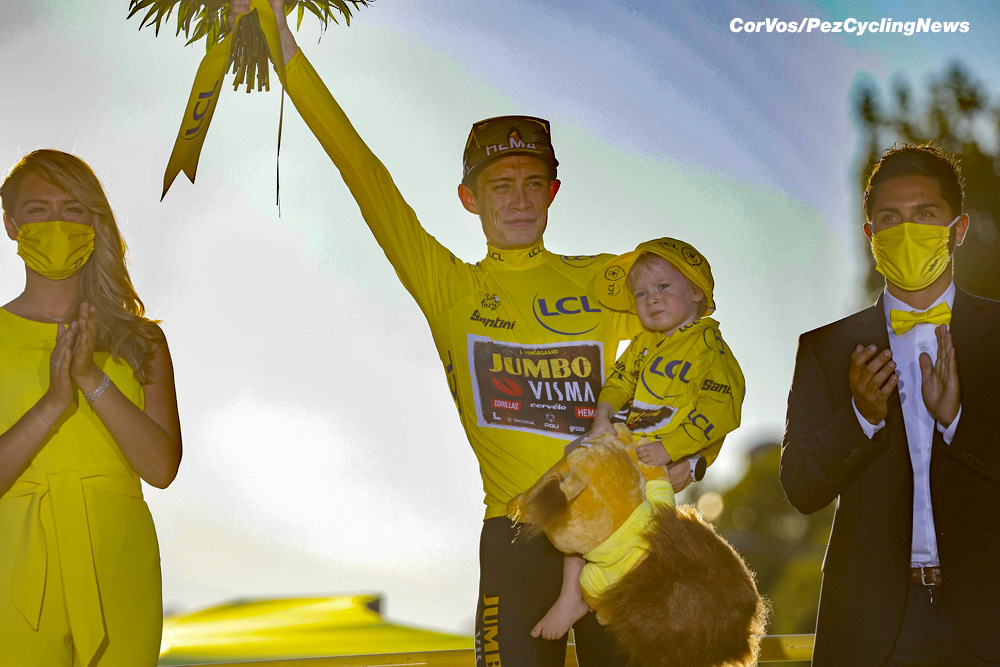 # All the Tour news in EUROTRASH and the ‘Final Round Up’ on Monday. Bring on la Vuelta! #