Tour Stage 19 Report: The stage finish in Cahors was expected to be a bunch sprint, but first the break and then Christophe Latour had different ideas. As the escape was being reeled in, Laporte jumped past them and carried on for the much wanted French stage win. Nothing changed on the overall, Jonas Vingegaard still in the lead before Saturday’s time trial.

The final kilometre of stage 19

Christophe Laporte of Jumbo-Visma won the nineteenth stage of the Tour de France. In the stage from Castelnau-Magnoac to Cahors, the Frenchman jumped past a leading group of three in the last kilometre to take the victory. This was the first French stage victory in the 2022 Tour. 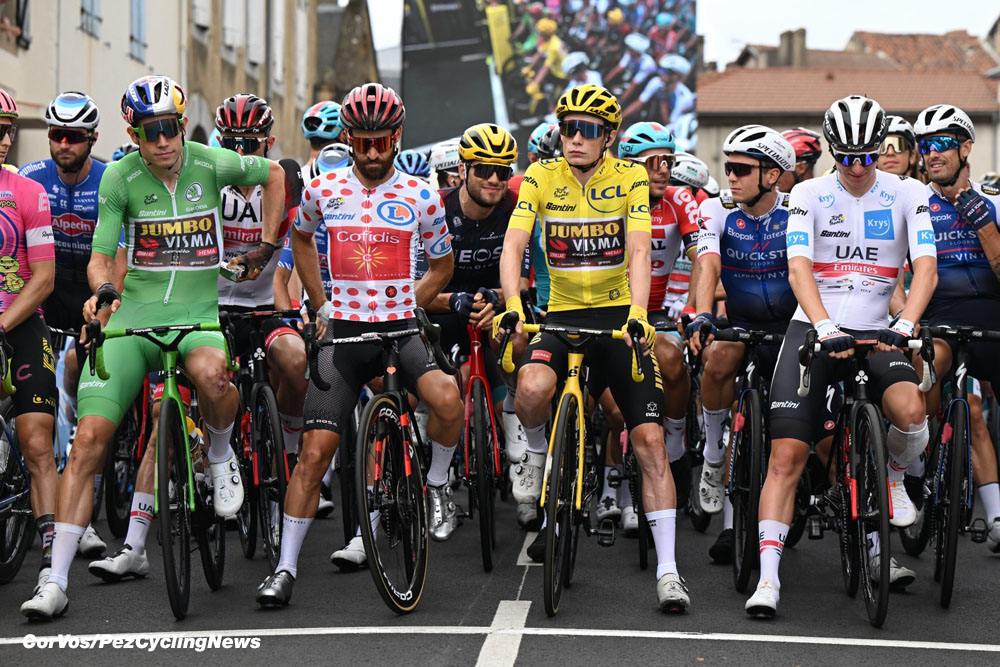 The jerseys at the start, Jonas Vingegaard has the KOM, but Simon Geschke can still wear it

Tour boss, Christian Prudhomme: “Curiously, after passing through the departments of Gers and Tarn-et-Garonne, the Tour’s sojourn in the Lot offers a nod back to the race’s opening days: the castle of Cayx, located close to Cahors, belongs to the Danish royal family. Among their subjects riding in the peloton, there should be no lack of sprinters who are capable of shining in Cahors.” 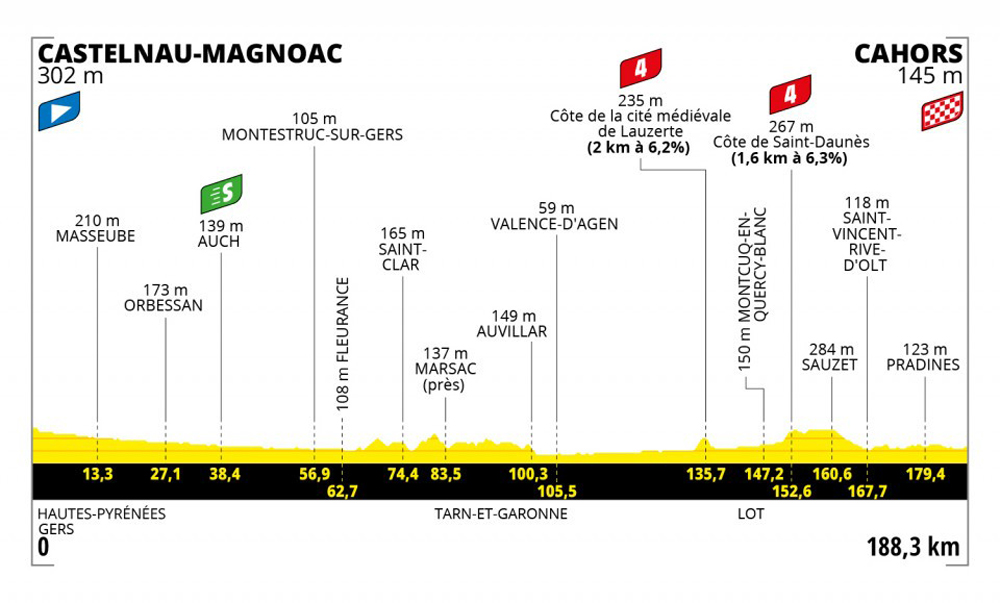 The peloton left the Pyrenees behind in the nineteenth stage. From Castelnau-Magnoac the route led through the hills of southern France and valley of the River Garonne. In the second half of the stage there were two fourth category climbs, the Côte de cité médiévale de Lauzerte and the Côte de Saint-Daunès. From the last climb there were more than 35 kilometres to the finish in Cahors. It was a nervous ride through the small villages, open plains and there was also the wind that the riders had to deal with. 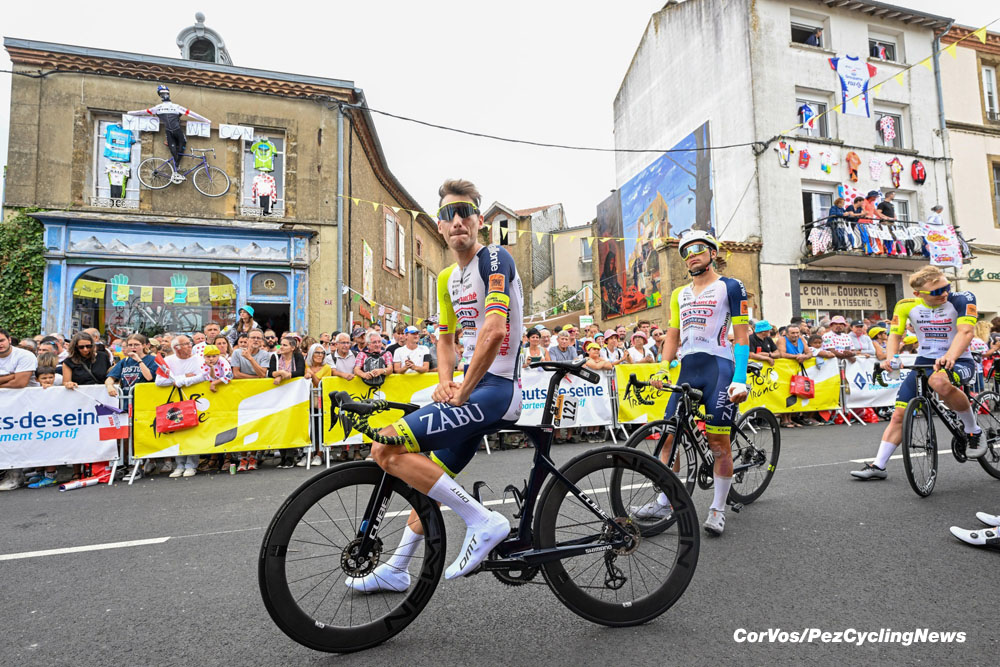 A more relaxed start to the day

Enric Mas, 11th overall, didn’t start. The Movistar leader tested positive for covid. Unlike the past few days, there was no attack from the flag. It was only after 4 kilometres that Mikkel Honoré (Quick-Step Alpha Vinyl), Quinn Simmons (Trek-Segafredo) and Taco van der Hoorn (Intermarché-Wanty-Gobert Matériaux) tried to get away, they were joined by Matej Mohorič (Bahrain-Victorious) and Nils Politt (BORA-hansgrohe). 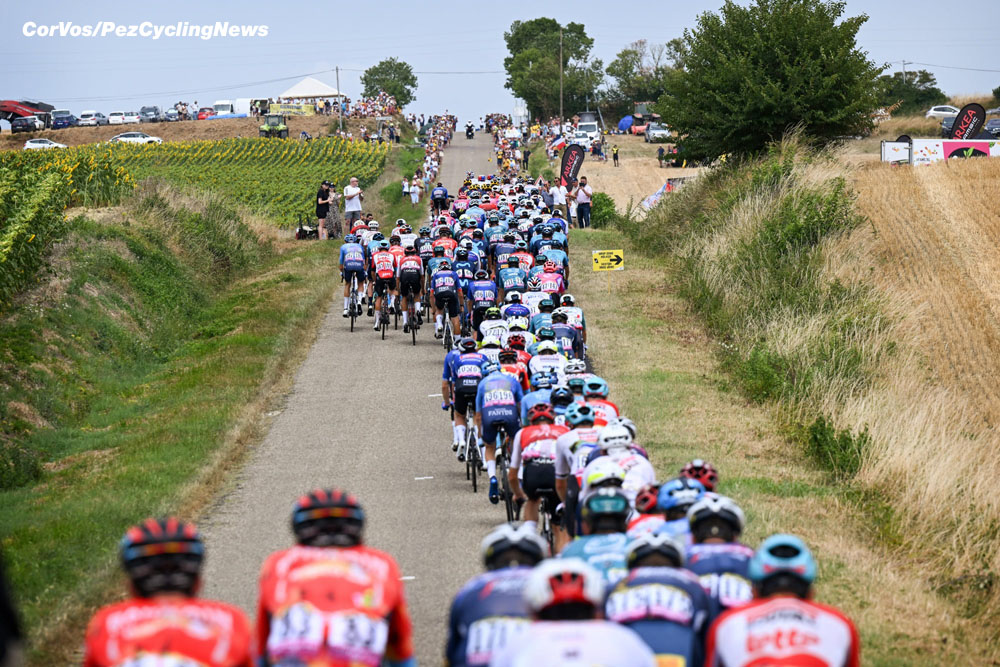 BikeExchange-Jayco, Alpecin-Deceuninck and Lotto Soudal, the teams of sprinters Dylan Groenewegen, Jasper Philipsen and Caleb Ewan, took control of the peloton. They didn’t let the five escapees get too far ahead and initially kept the time difference around 1 minute. The race came to a halt after half an hour of racing due to a demonstration on the course. After a short delay, the race continued with the peloton a minute behind the break. 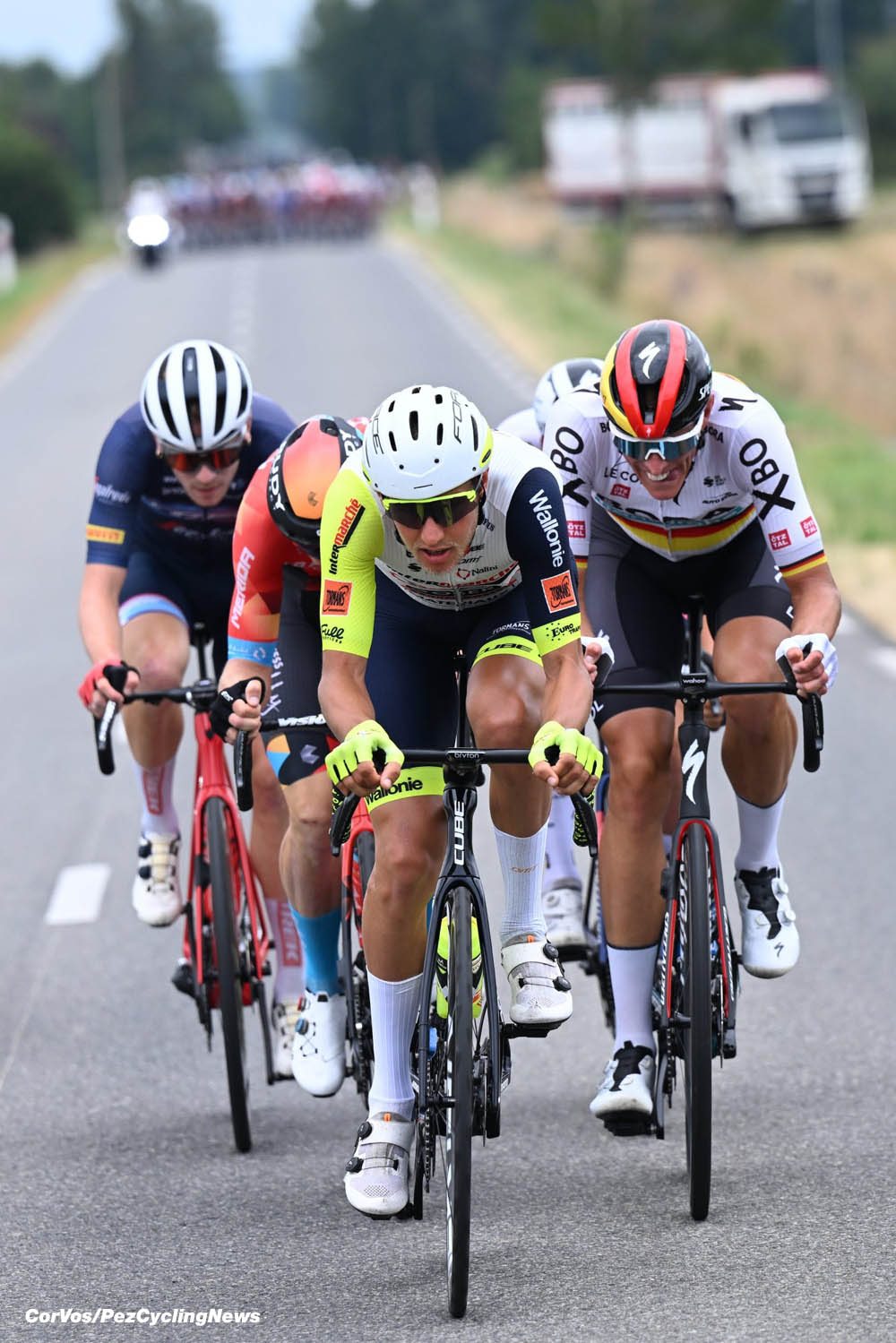 After 38.4 kilometres, the five escapees passed the intermediate sprint in Auch, where the ex-rider Nicolas Portal, who died in 2020, was honoured. The Frenchman was born here. It was Simmons who was first over the sprint line, ahead of Politt, Van der Hoorn, Honoré and Mohorič. Philipsen preceded the green jersey of Wout van Aert in the peloton. After the sprint the lead started to shrink and after 63 kilometres the peloton had the break breathing down their neck, but they didn’t want to give up just yet. 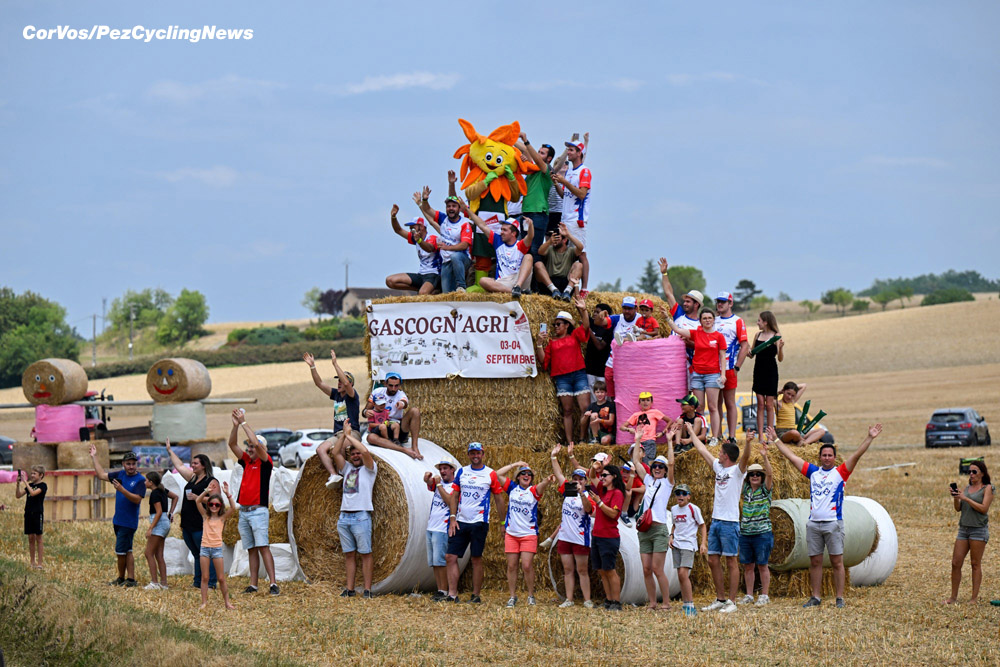 The farmers were being creative as usual

Honoré jumped again and Simmons, Van der Hoorn and Mohorič went after him. The four took another gap. Cyril Barthe (B&B Hotels) also attacked from the peloton. The former French U23 champion came close to the leading group, but ended up stuck in-between and was caught. The attackers took another minute. Meanwhile; BikeExchange-Jayco, Dylan Groenewegen’s team, sent a man to the front of the peloton to help with the chase work. 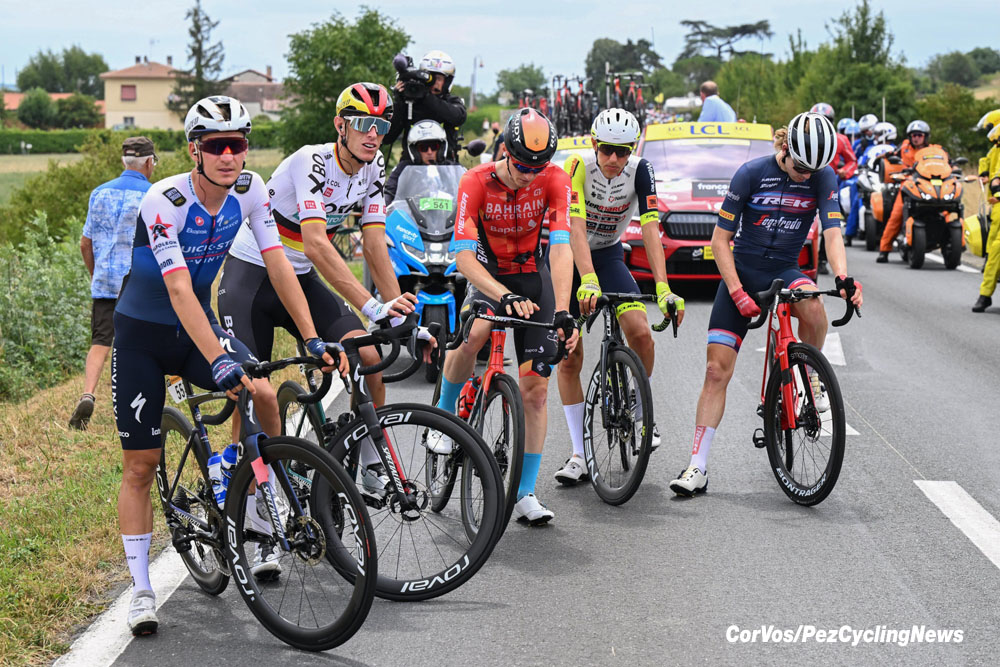 All stop for a demonstration

DSM, Alberto Dainese’s team, and TotalEnergies for Peter Sagan also put men on the front. On the first climb, the Côte de la cité médiévale de Lauzerte, Simmons attacked from the leading group, but it was Mohorič who took the only mountain point. This acceleration broke the group of escapees. Simmons attacked again and was left solo off the front. While the American continued to push on, Mohorič, Van der Hoorn and Honoré were caught by the peloton. 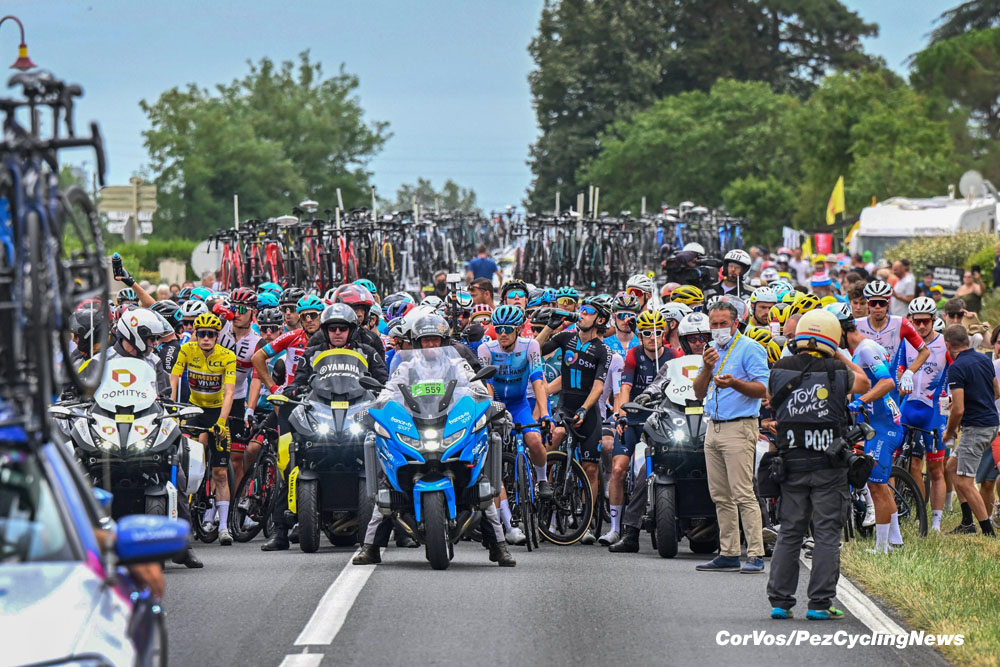 The leading group fell apart and also the peloton. Among the dropped riders were Fabio Jakobsen and Mads Pedersen. With 40 kilometres to go, Simmons had about 30 seconds on the first peloton and the American took in the last mountain point of the day on the Côte de Saint-Daunès. With 35 kilometres to go he was also caught and the peloton was complete again, although it remained restless and Alexis Gougeard (B&B Hotels) made a new attack. 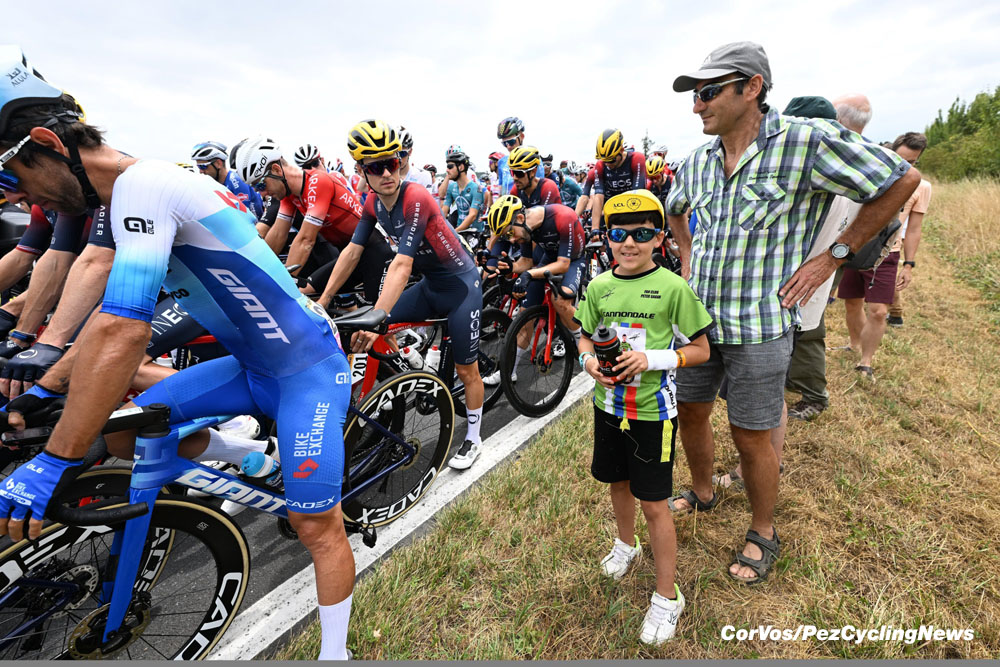 Added bonus for this young fan 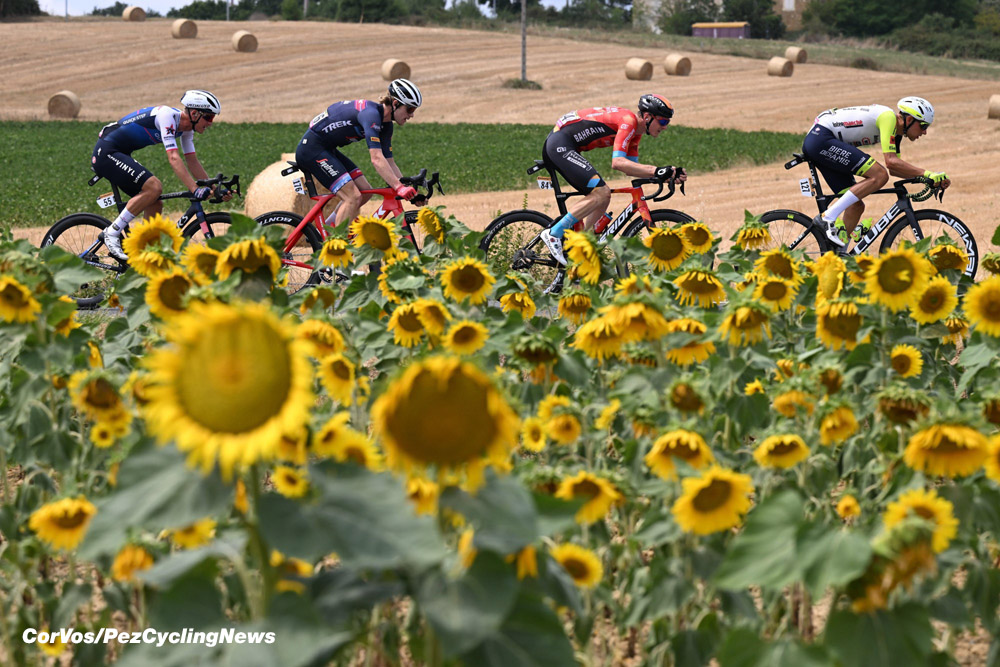 The last sunflowers of the 2022 Tour de France

This attack was answered by Tadej Pogačar. Of course, the Jumbo-Visma team responded to this and Wout van Aert brought the second overall rider back. Gougeard held the lead and was joined by Fred Wright (Bahrain-Victorious) and Jasper Stuyven (Trek-Segafredo). 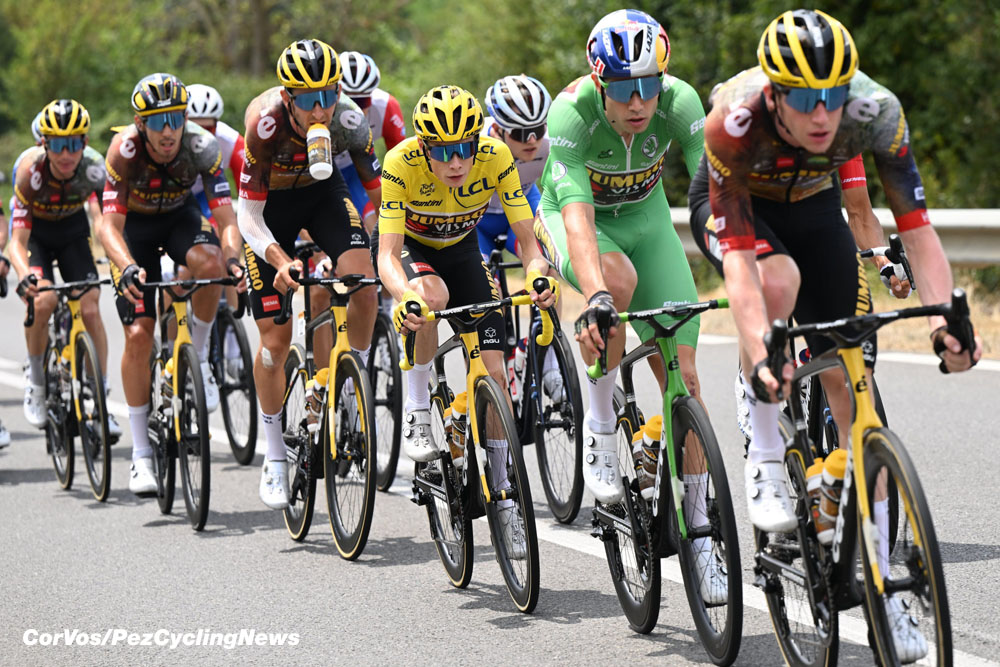 Jumbo-Visma back to work on the front of the peloton 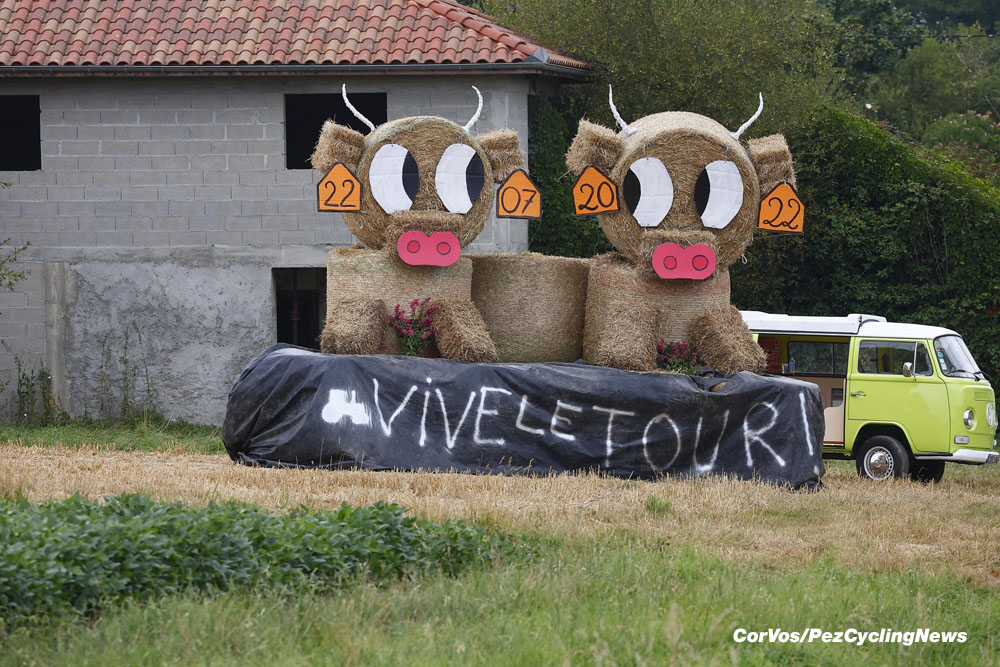 Wright, who was second on the stage to Saint-Étienne, Stuyven and Gougeard took 30 seconds on the peloton, 20 kilometres from the finish. Behind them, the sprinter’s teams continued to chase, but the undulating course and efforts of the past three weeks made the chase tough. Ten kilometres from the finish Quick-Step Alpha Vinyl came forward for leader Jakobsen who had got back to the peloton. As a result, the lead began to shrink quickly. 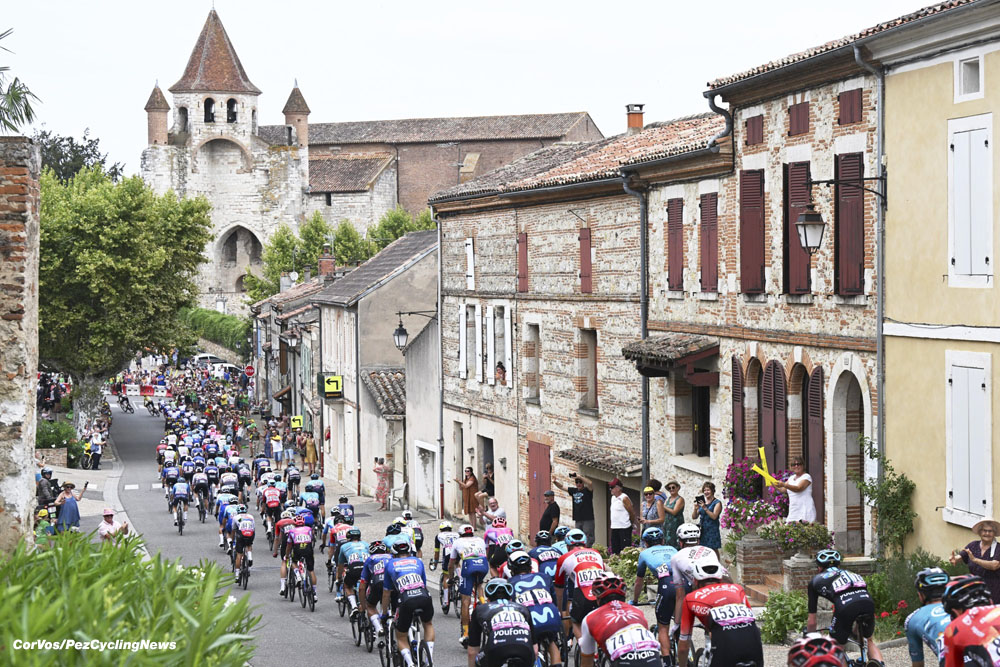 The peloton held the break close 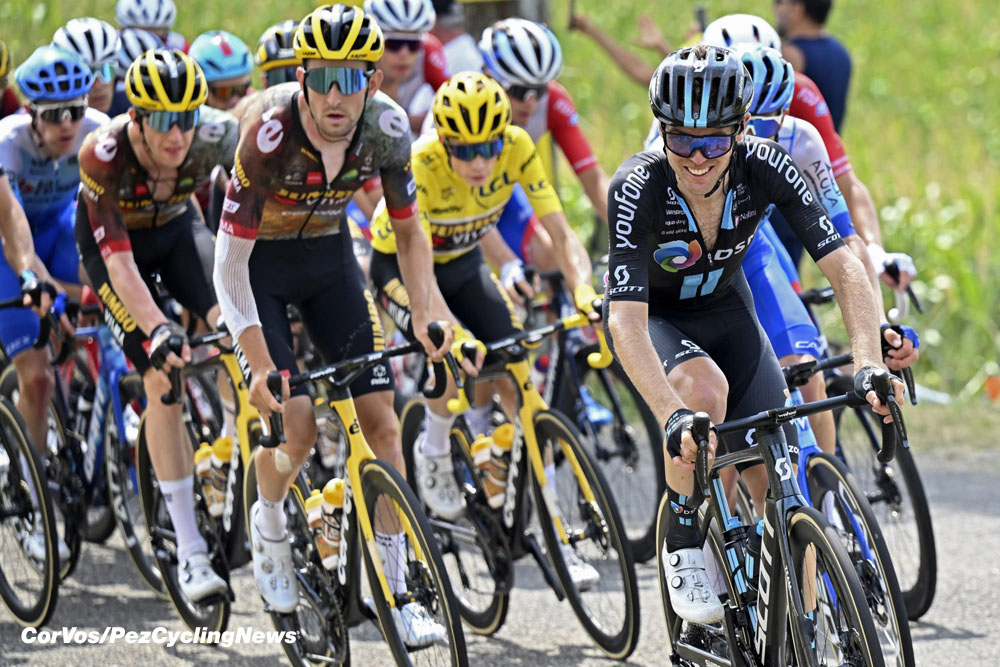 Time for a smile from Chris Hamilton

Quick-Step Alpha Vinyl reduced the lead to 10 seconds with 7 kilometres to go. Green jersey Wout van Aert took a long turn on the front into the last 3 kilometres. There, the escapee’s advantage was still 10 seconds. At 1 kilometre from the finish, Christophe Laporte made a jump to the leading group. Wright tried with a long sprint, but Laporte and Stuyven were still able to hold him. 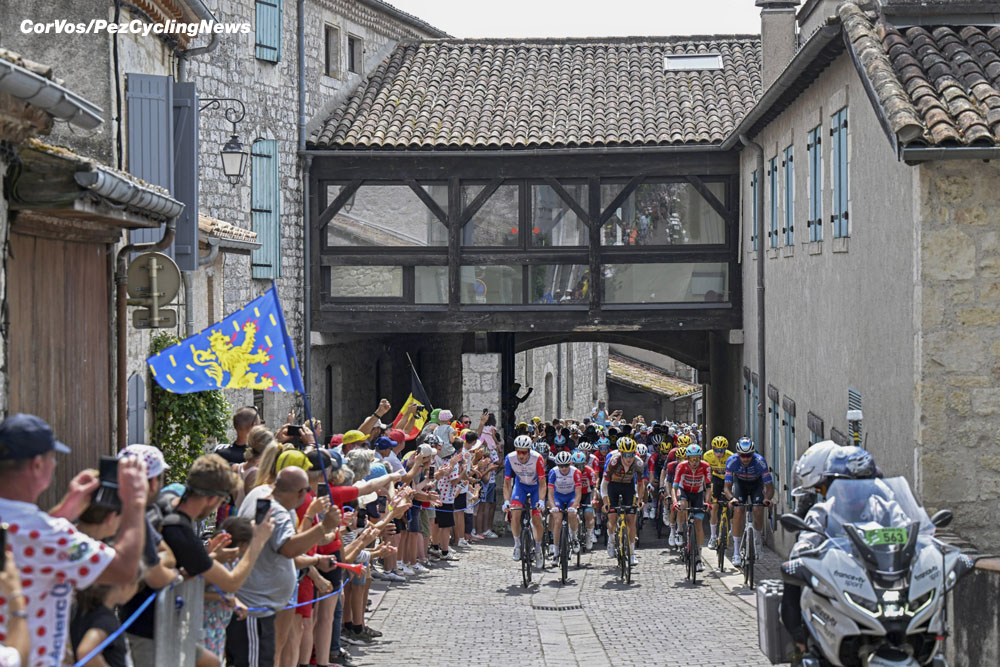 A nice ride in the Lot

In the end, Laporte took the win with a powerful finish. He was just ahead of Philipsen and Dainese. Florian Sénéchal and Tadej Pogačar completed the top-5. It was for the French sprinter and classic rider his first victory in a Grand Tour, after he had finished second and third in previous Tour stages. It was not Laporte’s first win this year; in May he won the first stage in Paris-Nice where jumbo-Visma achieved a 1-2-3 with his teammates Van Aert and Primož Roglič. 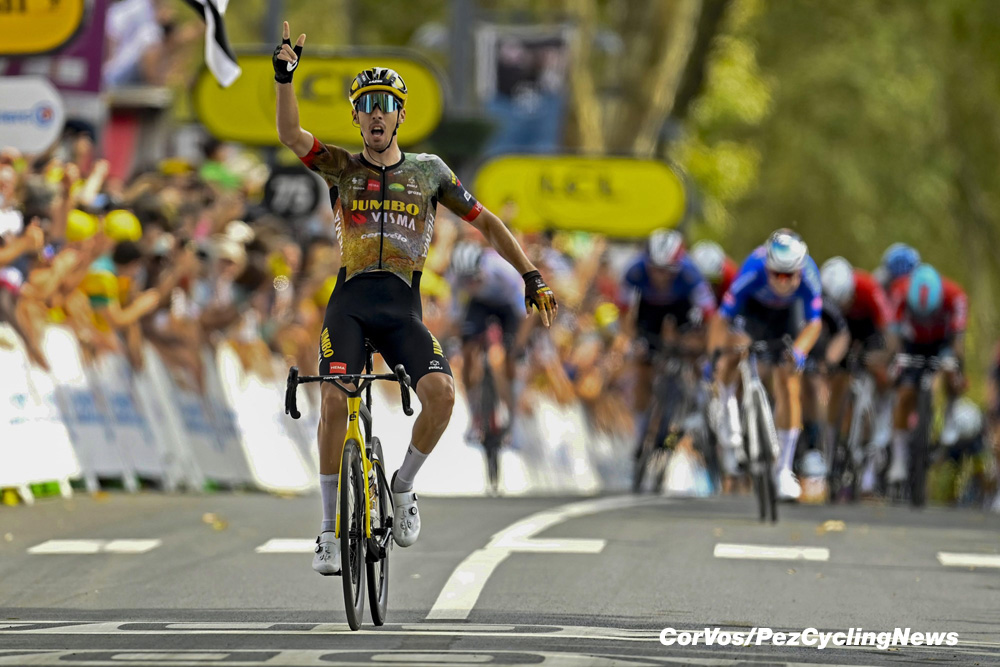 Stage winner, Christophe Laporte (Jumbo-Visma): “It’s hard to realise but I’m super happy. The team trusted me today. Wout [van Aert] told me: ‘it’s for you today’. The last time he said that, it was at Paris-Nice. We first reached our goal bring Jonas [Vingegaard] safely to the 3km to go mark. I sped up in a curve and I saw a bit of a gap behind me. I did the job to come across the leaders. It’s more than a reward, it’s huge! I was already super happy with this Tour de France even though I got no result for myself. Now the team gave me the opportunity to go for a stage win, it’s exceptional to win after I came twice second in the past. Wout could have ridden for himself instead. It’s important to get a French win. If it makes the crowd and my family happy, I’m happy too.” 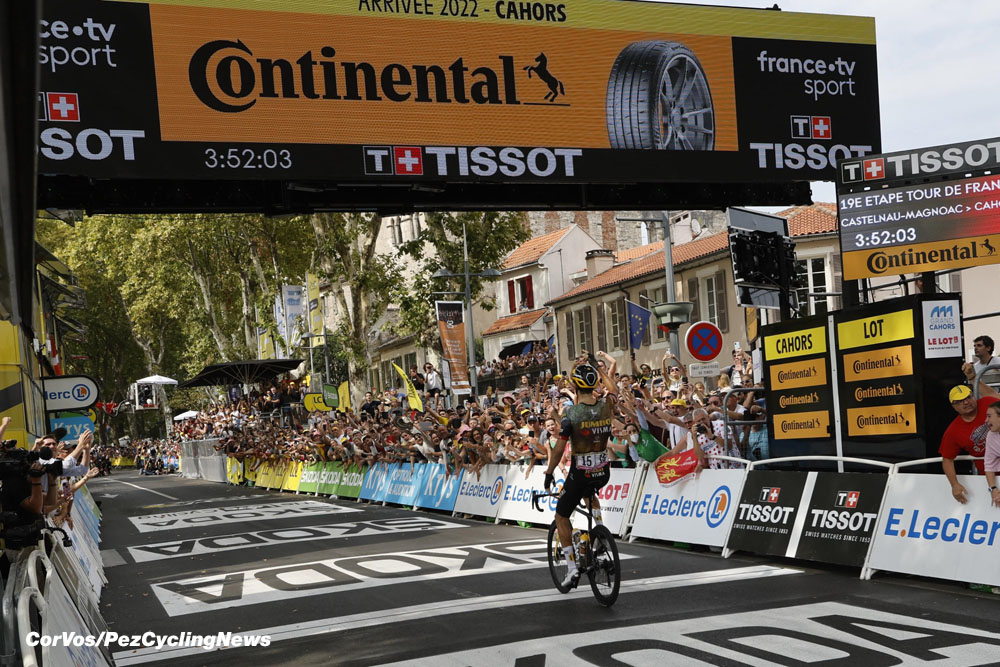 The win for Latour and France in le Tour

Overall leader, Jonas Vingegaard (Jumbo-Visma): “Yeah, I mean today was a very stressful day. I’m just happy to make it. I’m even happier with the stage win. Christophe [Laporte] is such a nice guy. It’s incredible. He really deserves this victory. He’s been a helper for the whole three weeks and he’s able to win a stage. It shows more of what our team is. I went to see the course of tomorrow’s time trial in April. It’s quite technical in the first 10km. In general it’s a technical time trial. I’m just gonna do everything I can and hopefully it’ll be enough [to win the Tour de France].” 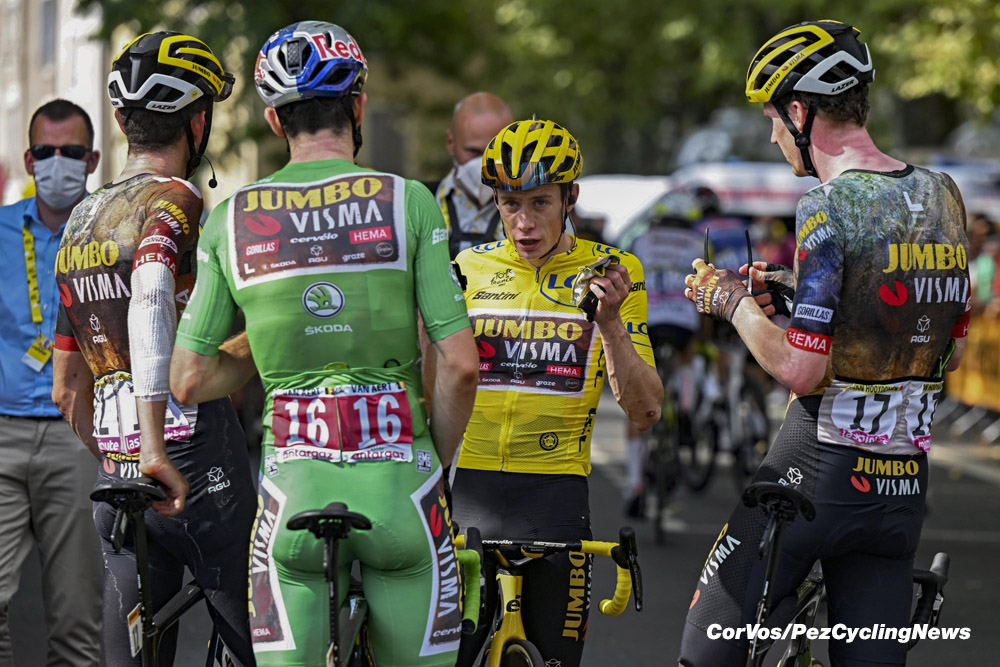 It has been a good Tour for Jumbo-Visma

7 Tips to Find Time to Cycle as a Student