Stage Preview: What an amazing race we’ve had so far. The Australians love their home race, but the Italians have offered respect as well. Gerrans, Evans, Porte and Ulissi have been a class apart at the 2014 Tour Down Under as we head into the final stage with only 10 seconds separating the 4 riders. Gerrans leads Evans by 1 second, Ulissi is 4 seconds behind him with Porte just another 5 seconds away.

Some readers might remember the last stage of a grand tour. These are processions until the final few kilometres and then we get a sprint. This isn’t the Tour de France! We have an 85.5km criterium, in the centre of Adelaide. The organisers have created a brand new circuit for 2014. This is because it’s Australia Day and cricket is also being played in Adelaide. 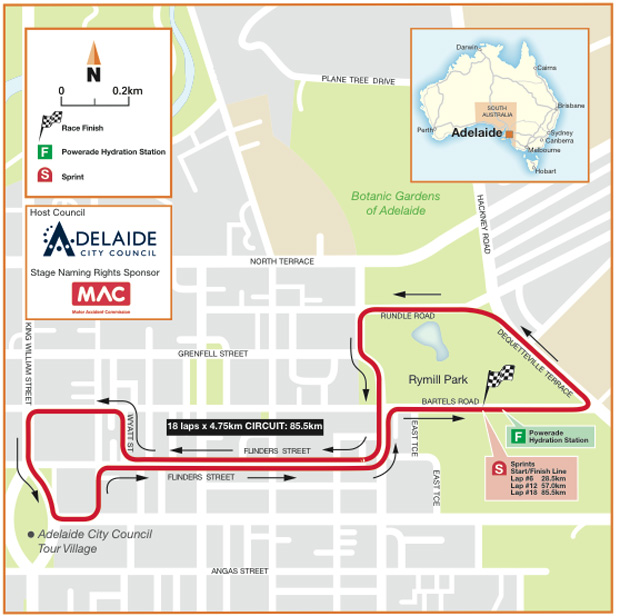 The riders will do 18 laps of the 4.75km circuit. The organisers have decided to place a 90 degree, right-hand turn, just over 200 metres from the end of the race. In fact, there is also a tight left-hand turn, just before it.

With the race being so close, the attention turns to bonus sprints. We have 2 sprints, lap 5 and 12. These come after 28.5km and 57km of racing. I find it impossible to believe that any of the top 4 riders can out-sprint Gerrans. Orica GreenEDGE have the strongest team and are excellent in criteriums, especially Luke Durbridge. It would be no surprise to see “Turbo Durbo” go into the break and mop up all the time bonuses. If the field allow him too much of a gap, they’ll find it hard to catch him. The racing will be very fast and very nervous and I really hope that we don’t get any crashes.

The most likely outcome is a sprint finish. That means we’ll get a rematch between Gripel and Kittel. In the pre-race, People’s Choice Classic, it was Kittel who won the battle of the Germans. Since then, we haven’t seen much of him. In a poor bit of racing, he missed the split on stage 4 and didn’t get to sprint. Meanwhile, Andre Greipel has hardly been off our screens. He lost to Gerrans on stage 1, was with the front group on stage 2, delivered Hansen to the foot of Corkscrew Road on stage 3, won stage 4 and rode brilliantly for Hansen on stage 5. He is clearly in form and has great legs, I don’t see Kittel beating him again. 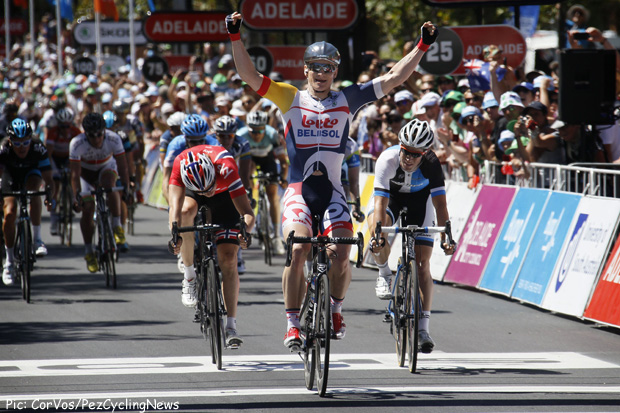 The other leading contenders will be: Goss, Matthews, Von Hoff, Renshaw, Ferrari, Viviani and Ewan.

Remember, the Aussies will be very motivated to win on Australia Day, just like Gerrans did in 2012. Due to the tightness of the GC, I think Orica will be riding for Gerrans. This means that Goss and Matthews will miss out again. Viviani sprinted very well on stage 4, but his tactical awareness is poor and he doesn’t have a good lead-out. Von Hoff is going well but on a flat finish he isn’t always the quickest. Renshaw has been disappointing so far and I don’t see anything that suggests this will change.

Caleb Ewan finished a brilliant 3rd in the pre-race criterium. Despite not having a strong team, he attached himself to the back wheel of Kittel and stayed there. He couldn’t live with Kittel and Greipel, but was the best of the rest. After a quiet race, I would expect to see him go well here. A win might be beyond him, but it would be a brilliant fairytale on Australia Day.

Just in case something strange happens and there is a tie for the overall, Simon Gerrans will be the winner. The organisers add together the finishing places for each stage and Gerrans is on 15, Evans 32, Ulissi 44 and Porte 70.

Due to the tricky end of the stage, the team with the best lead-out will win. Kittel was lucky in the People’s Choice Classic, as he got on Greipel’s wheel and had enough road to go past him. This won’t happen here! If Greipel comes out of the last corner 2nd wheel, he will win the race. Jurgen Roelandts did a brilliant lead-out on stage 4, where he even managed to finish 2nd. The strength of the Lotto-Belisol team, should swing the stage in favour of Andre Greipel.

Has to be Greipel for me and an overall win for Gerrans.