PEZ Down Under: The Day Of The Joey!

Day three of David Pearce’s Australian adventure takes in stage 2 of the Santos Tour Down Under. More big crowds were at the roadside to greet the riders as they battled towards the up-hill finish in Stirling. With all the Joey’s around we are definitely in Australia, but it was a day for the Spanish.

Word’s and photo’s by David Pearce.

An exciting day loomed for Stage 2 of the Santos TDU from Unley to Stirling with discussion centered over whether Jack Bobridge would be able to hold onto the Ochre jersey. He was certainly in fine spirit before the race stating that “It was great to wake up this morning after the big win yesterday. It is going to be a hard stage today, but I am up for the challenge”.

Arriving in Unley I found it to be in particularly fine form with crowds gathered early to see the riders prepare and sign on (as they are required to do at the beginning of each stage) whilst enjoying glasses of champagne in the many restaurants that had opened early in celebration of the tour and ladies day. It was buzzing with excitement and anticipation. People were able to get up close to the stars and special guests. 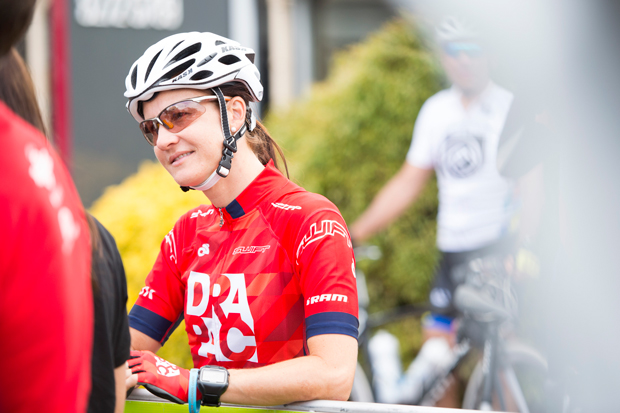 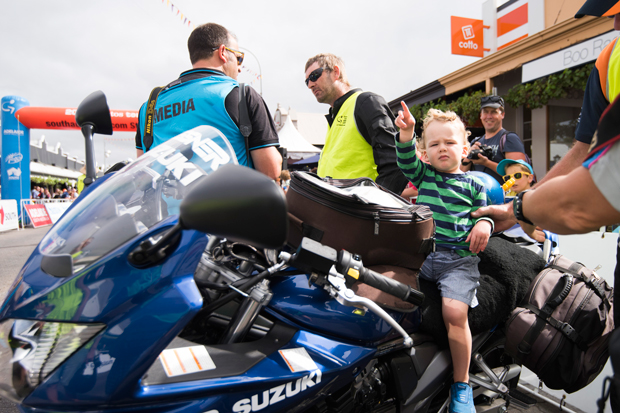 Everyone looks forward to the ride ahead 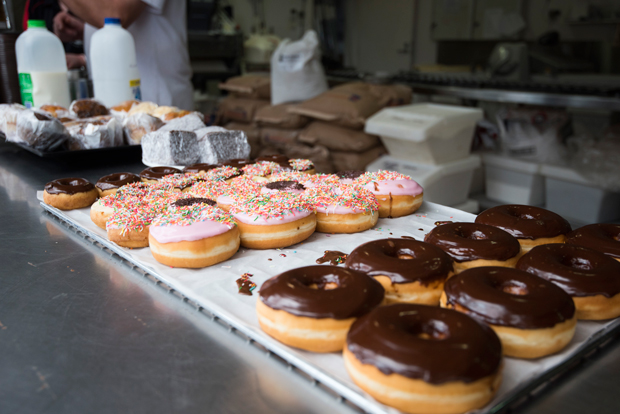 Apparently they speak the universal language of “donut” Down Under 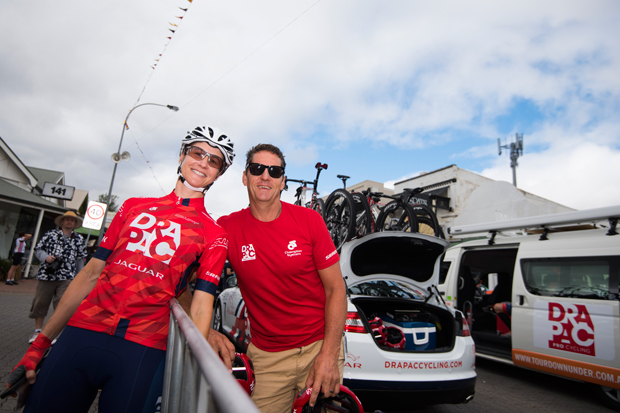 The Soigneur posing with one of the support team 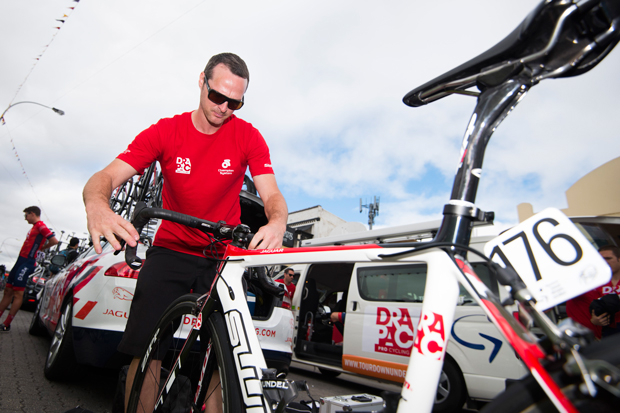 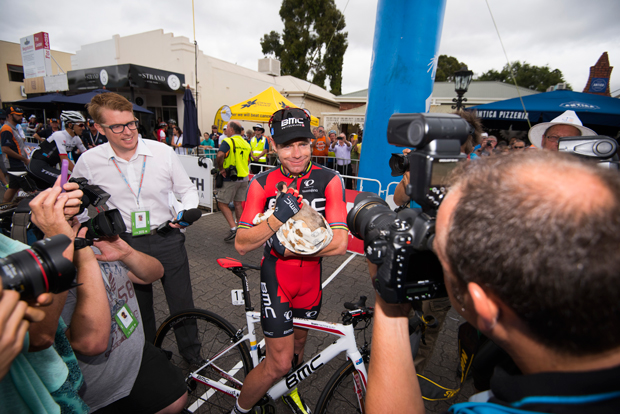 Cadel Evans does his annual pose with a Joey

I had a personal highlight in having the opportunity to speak with Greg LeMond, the 3 times Tour de France winner before the stage start. I own a LeMond “Chambery” bike and still ride it to this day bringing quite a lot of attention from those in the know. It was lovely to relay this to him and he seemed genuinely interested and pleased about this. A lovely man who I have fond memories of watching in The Tour when I was 12 or 13. To say this was a unique pre-start for the riders would be an understatement with the Aussies pulling out all the cards. They had brought in 2 “Joeys” (baby Kangaroos) for the riders to see and be photographed with. It was a nice touch. 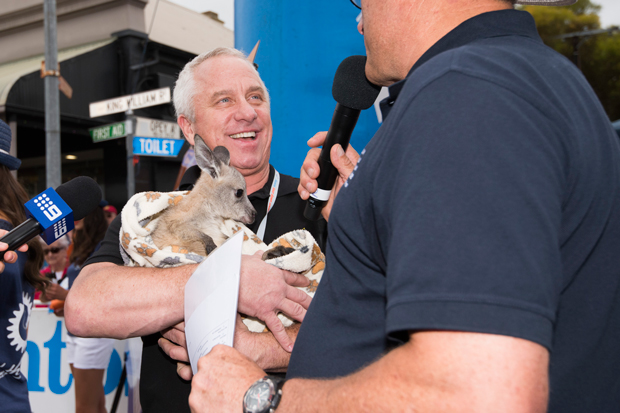 While Greg LeMond cuddles up with his first… 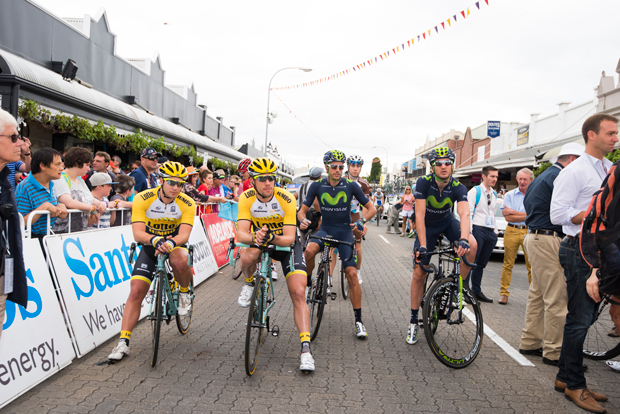 The first riders assemble at the start line 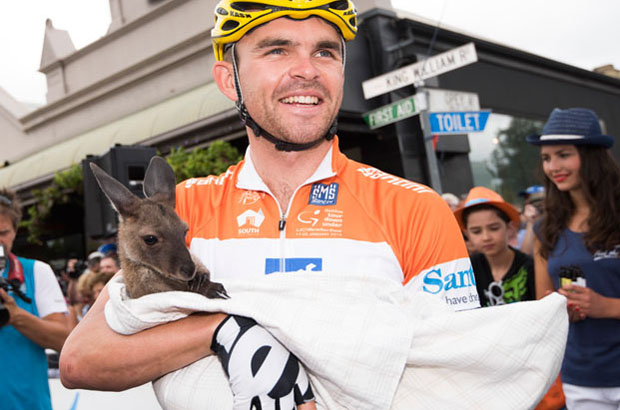 And another Joey shot with race leader Jack Bobridge

Like yesterday we left 10 minutes before the stage start to enable us to find a suitable location to shoot from en route. This turned out to be on one of the first climbs of the day where I had spotted an S- bend so asked the driver to pull over and let me out. I experimented a bit with various lenses and compositions as you never know which side of the road the riders will take and how the Tour vehicles will be positioned. I hopefully got it right…

A 3 man breakaway had formed including the BMC rider Campbell Blakemore who would later crash riding back to base after the stage with a suspected broken collar bone. I can only imagine the physical pain he must be going through along with the mental anguish. It was then a quick dash back to the car to allow us to reach 4 or 5 other locations through the race. 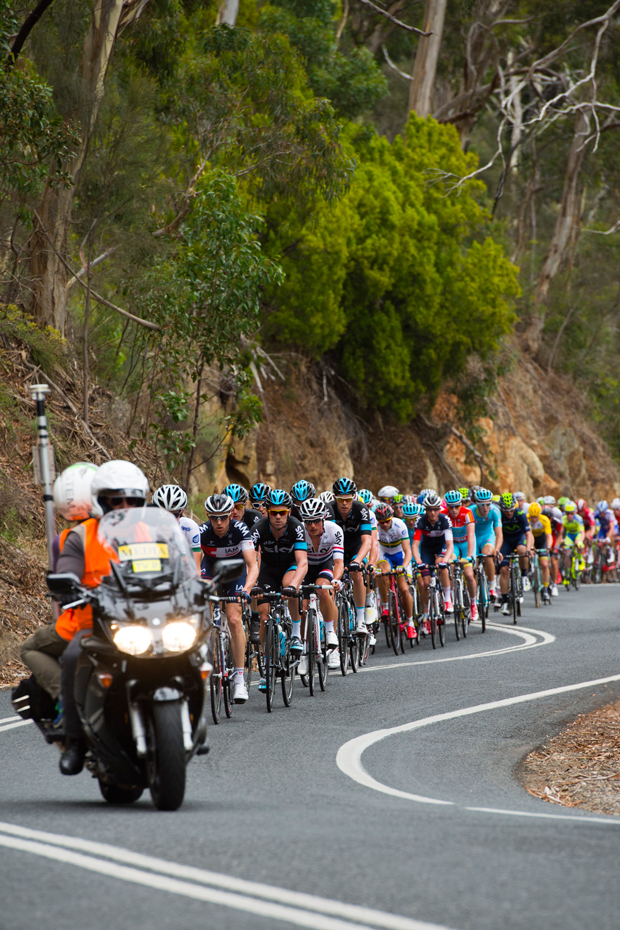 The riders make their way up one of the first climbs 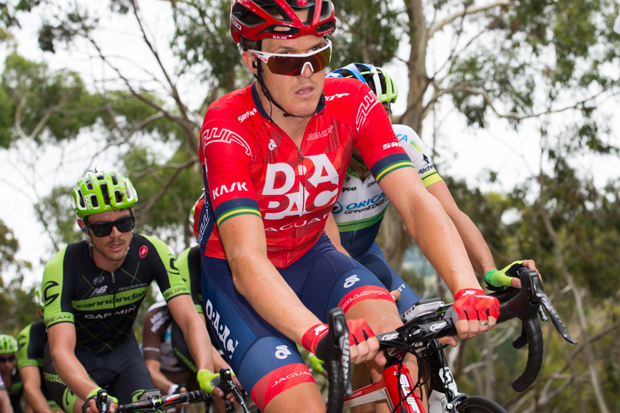 I often pull my sunnies down on a climb so pleased to see a pro doing the same! 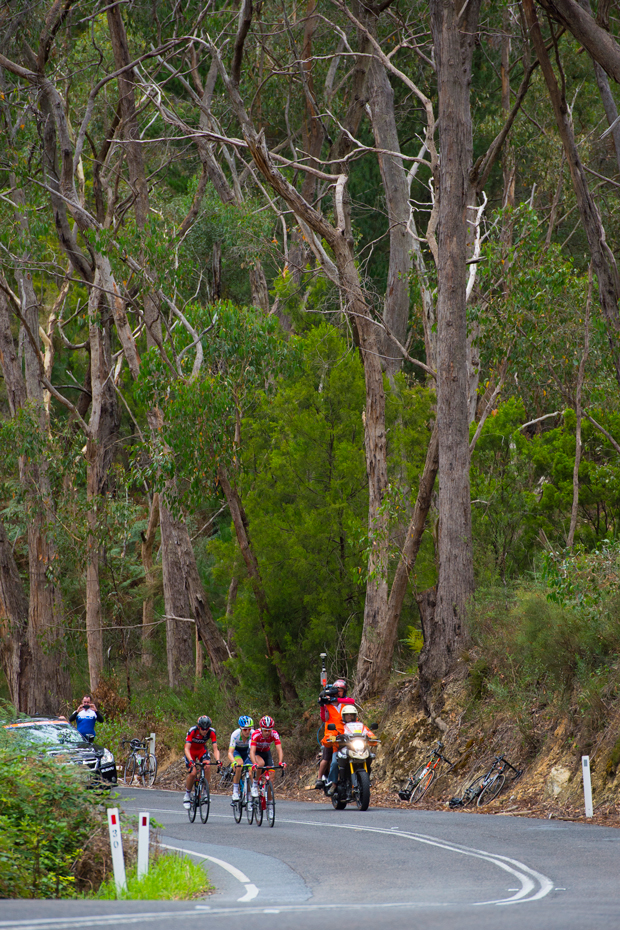 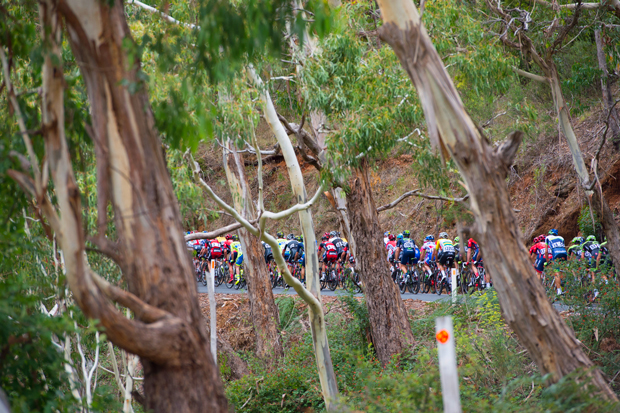 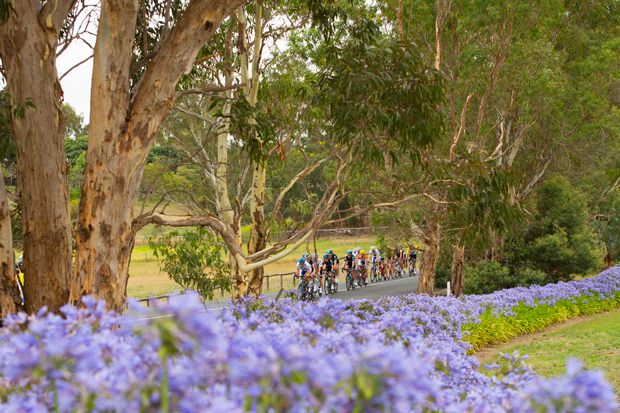 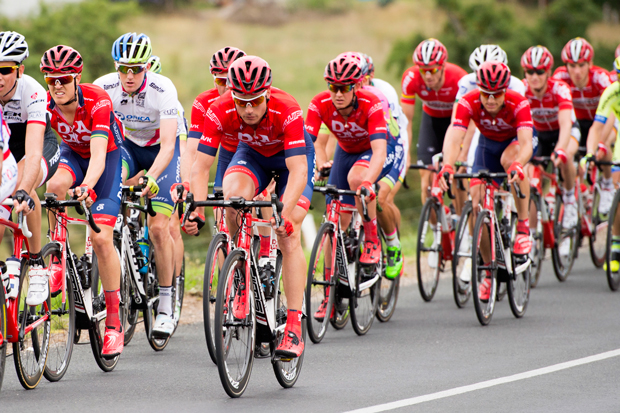 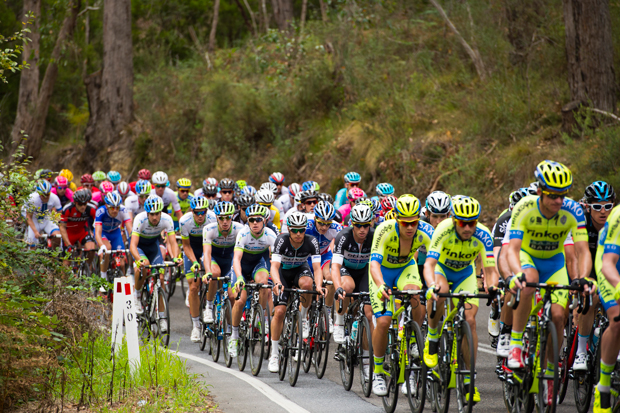 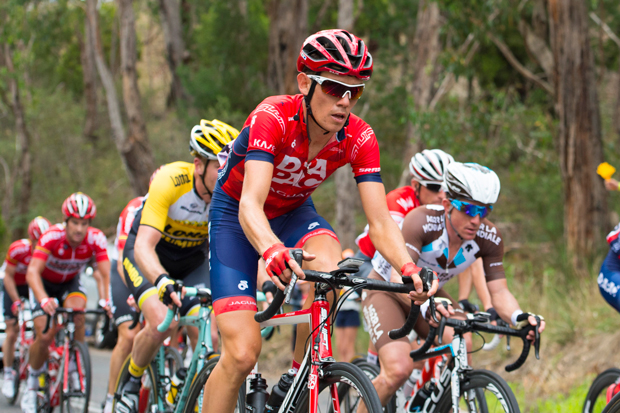 I was surprised at quite how hilly the route was today, it had hardly any flat sections making it especially hard for the riders. The scenery was stunning, though I doubt the riders had the opportunity to take any of it in. Australia has a unique beauty with its indigenous trees and wildlife and I am always fascinated how some of the trees shred their bark like a snake shredding its skin. 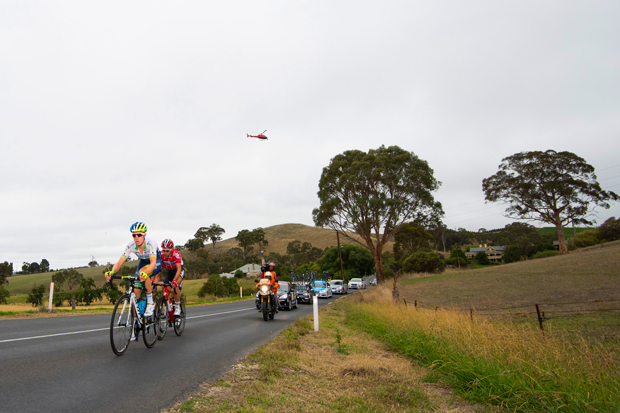 The leaders race through with the TV chopper overhead. It was one of 3 covering the race

It is hard to follow the race when photographing it but you can gauge a basic idea until the race gets into the final stages when you have to put together the pieces. This was especially true today. We had seen the break away stay out in front with the peloton pretty much together, that was until the last loop where all hell must have let loose. The field was seriously fragmented and I was unable to ascertain what had happened. It could only have been the frenetic pace of racing causing the peleton to fragment.

Josè Luis Arrieta from Movistar helped fill in the gaps by saying that the team knew that Lobato was climbing well and that he could get up the difficult climbs easier than the other sprinters so felt they had a good chance with him today. Even though he suffered a puncture with one lap to go on the last loop he worked his way back through the field to contest the final sprint which he duly went on to win. He started that “It’s a different type of terrain for me. I am coming here in good form and was able to deliver a victory for the team”. 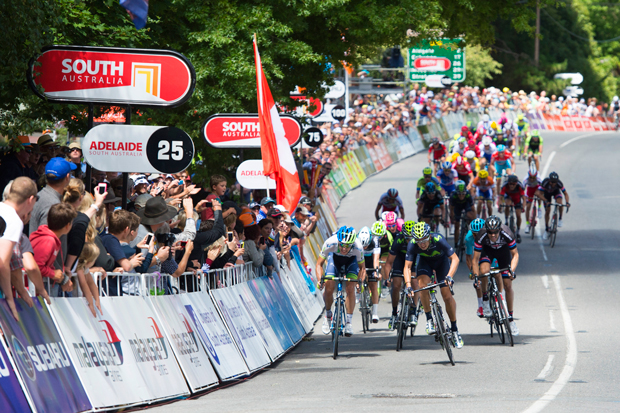 The approach to the finish line

Speaking after the race Tom Southam the DS for Drapac said “Tough day for the boys. Wouter had an off day, which was very difficult on a circuit like that. Trav and Tim both rode well and finished on the same time as the winner, which will be crucial to their GC aspirations. The finish tomorrow should suit them both a lot more than today so we will look to use that to start to move them up the GC.”

And Travis Meyer from Drapac stated :”Today’s objective was to keep Tim and myself out of trouble. All the guys helped us out through the day and we both managed to stay on bunch time so it was a great team effort. I felt great all day and well in control. I am excited for tomorrow’s finish up Paracombe.” 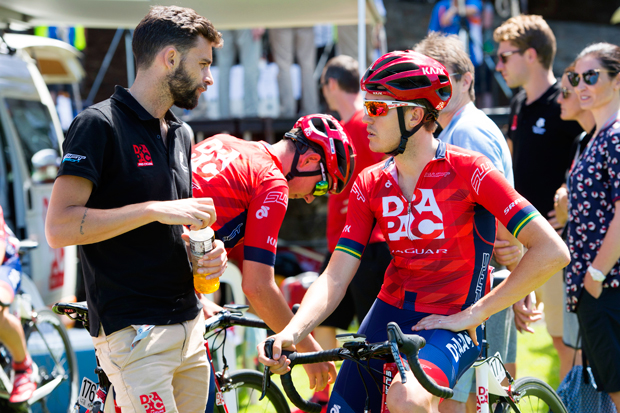 DS Tom Southam discussing the race with one of the riders 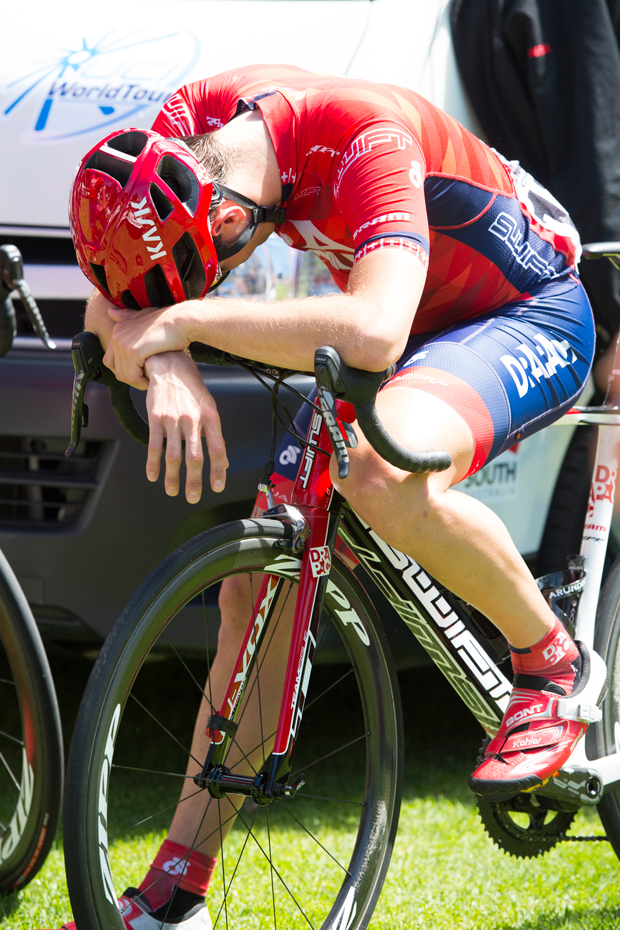 LTdL 2015 Route Returns to its Roots for the 20th Edition