PEZ Down Under: Team Car Action!

Stage three of the Santos Tour Down Under saw PEZ man in Australia, David Pearce, spend the day in the Drapac team car to get the full in race experience. From coffee to cycling heroes and the chance to see the day’s race break up close. Did the break go all the way? Read on to find out.

Words and photos by David Pearce.

When a legend is in town and an opportunity presents itself to have an early morning chat with them you make the required effort and force yourself out of bed. This is magnified when the said person was a huge inspiration to you from the first time you saw him ride in the 1985 Tour, possibly sacrificing his own chance of winning on team orders to allow Hinault to win. The legend I refer to is of course Greg Lemond who went on to win 3 Tours. During the chat to a handful of other media Greg talked about Lance Armstrong, doping and the how he still suffers the effects from accidentally being shot in the back with a shotgun. It was a lovely 30 minutes and a great start to the day.

Whilst there Richie Porte came up to grab a coffee from the media’s “Coffee Guy” Tony. He has become a bit of an institution with a reputation for supplying the winner of each stage with coffee in the morning. He originally is from Liverpool, England so great to see a compatriot and even greater to see his coffee business doing so well and in such demand by world class athletes. 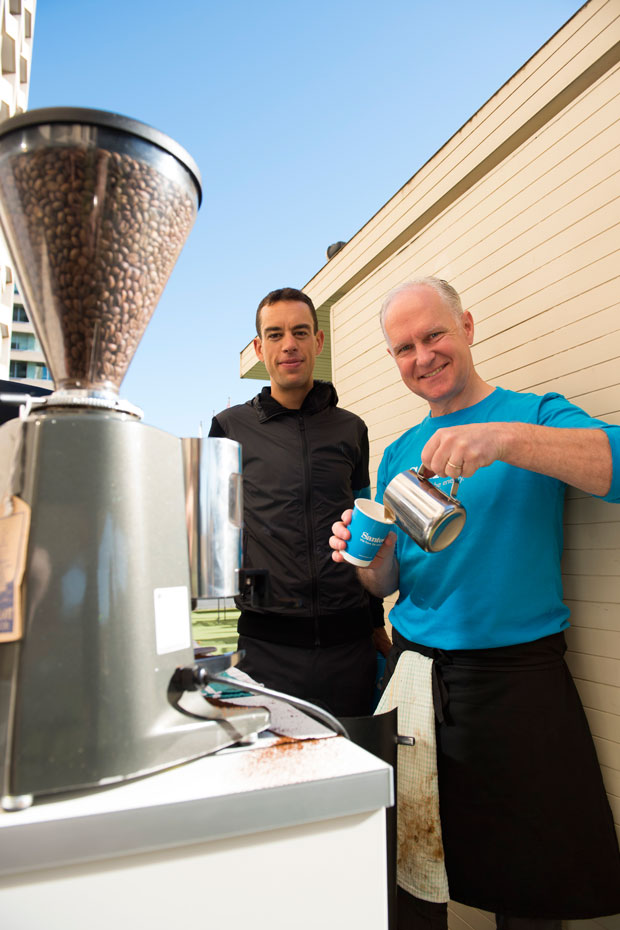 Tony and Richie Porte who ventured up to get a coffee 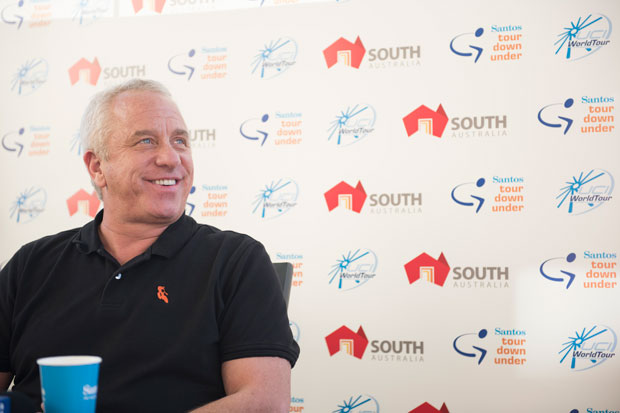 The legend that is Greg LeMond

My journey covering the Drapac team continued today with a ride in the team car with the Director Sportif (DS) Tom Southam at the wheel. This is a privilege, especially at a WorldTour race and provides substantial insight into the relationship between the DS, the riders, and others vehicles and teams. 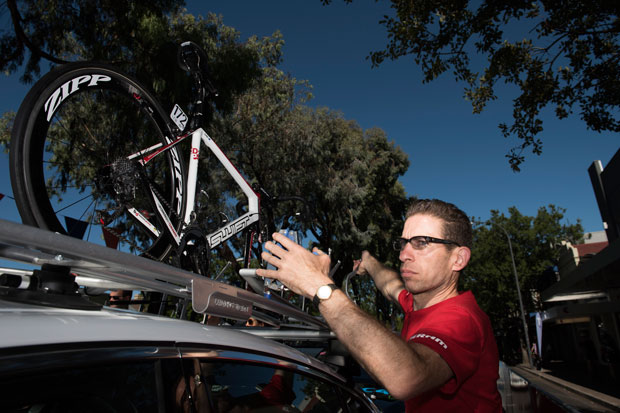 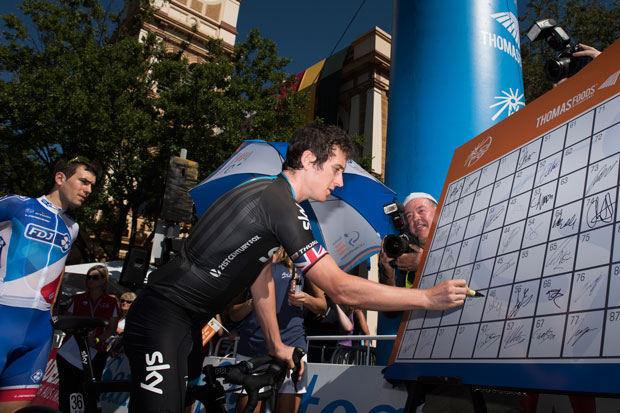 “G” from Team Sky signing on for the stage 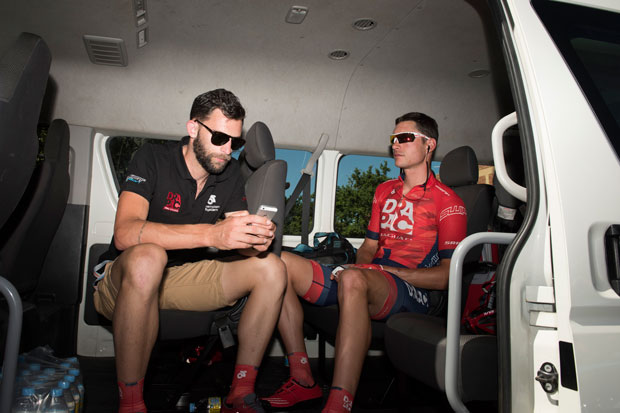 Zoning out in the team bus

It soon became apparent that to be a DS requires a multitude of skills beyond tactical planning, live race analysis and team management. The role necessitates a driving ability akin to a racing driver, actually more. A racing driver can find a gap and overtake in the knowledge there is safety cage around both vehicles should a collision occur. In a bike race the driver is protected but the riders are not. The cars pass by with only inches to spare through impossible gaps meaning an immense amount of trust is placed on all drivers. One small error can be catastrophic. This is further compounded by the crowds at the side of the road – estimated at 108,000 today. 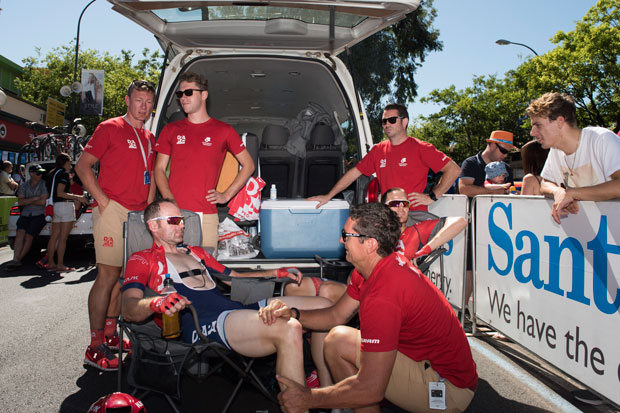 Leg massage before the stage start

The car will only pass through the peloton if one of their riders is in a breakaway and permission has been given by the race director in the lead car. Otherwise the team car stays behind the peloton and only moves forward through the other team cars if their rider has raised their hand for assistance. In this case the Commissaire radios through instructing the team to move forward and help. This is maybe for a mechanical or to supply the riders with fresh bidons.

I had picked a good day to be in the team car as one of our riders Will Clarke instigated the breakaway meaning lots of action. This was magnified by the weather which really ramped up in temperature today effecting the amount of fluids the riders needed. The Commissaire increased the feed stations to 3 by allowing riders to take on board fuel on lap 1 of the first loop which they passed through twice which was needed as we were running low on water. What struck me though is how the DS of Drapac worked to help the other riders in the breakaway from Garmin and Trek by supplying them with bidons. This gesture of goodwill pays dividends as who knows what favors you may need in the future. Alliances are good. As each team was only allowed one team car it meant that Garmin and Trek could look after the Drapac riders in the peloton if needed. 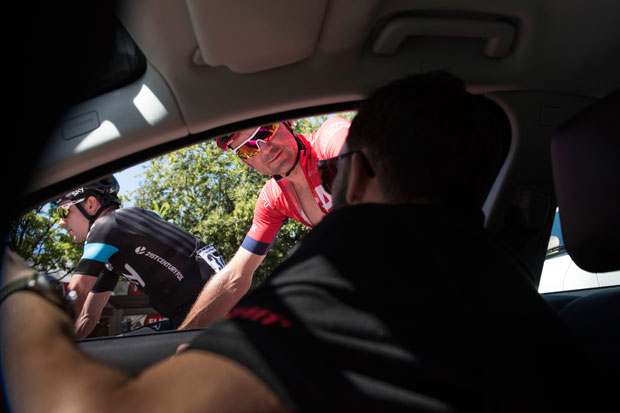 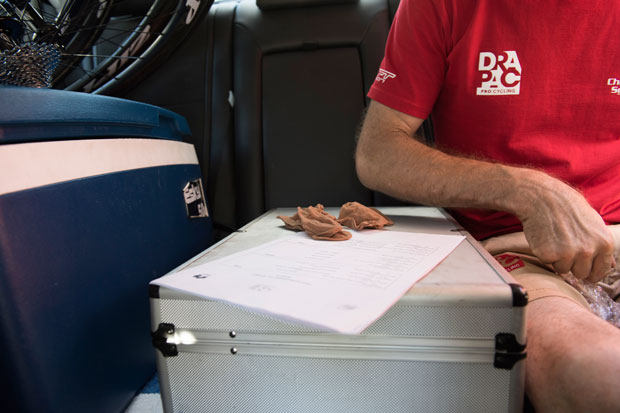 A view from the team car

The helicopters are always overhead! 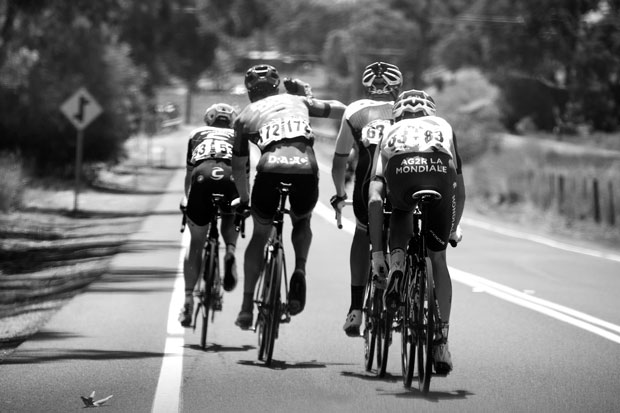 Tom really had to have his ear tuned into the radio comms with his riders. It was incredibly hard to hear what was being said yet he managed to decipher it. Experience is everything here and I was impressed by Tom’s ability to multi task on another level. I kept almost silent for the duration (hard as I am very social) as I can only imagine the potential consequences if I was talking and Tom missed a vital piece of information.

I hopped out of the car towards the end and jumped into another team vehicle to take me to the finish line in case Will pulled off the win. Sadly this was not the case with Rohan Dennis from BMC taking it. Will was awarded the Most Competitive rider though which was justly deserved. He commented after the race about the sprints “Lasse Hansen jumped a bit…He’s an Olympic gold medalist for omnium so it was a surprise that I got him in the sprints! Towards the end the other guys were a bit tired so I tried to go away again but it was with no illusion”. 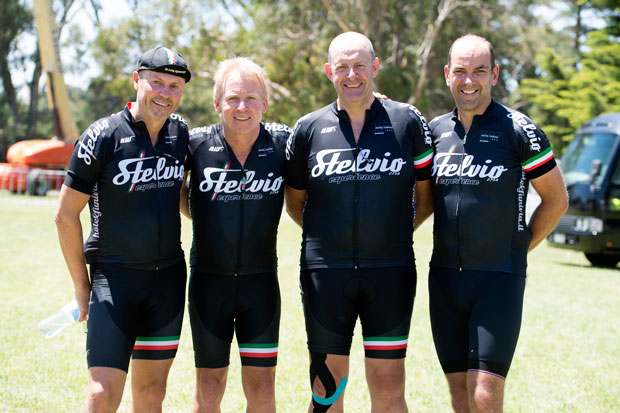 Two days in a row I have seen Australians wearing “Stelvio Experience” cycling kits. I have a particular affinity with them as I have stayed in the same hotel and ride up the Stelvio myself. It is great to chat with them and there experiences. They all seem to go back every year and do it again enduring the pain! The PEZ Crew was there for their 10th Anniversary, and you can find the hotel via www.italycyclingholidays.com 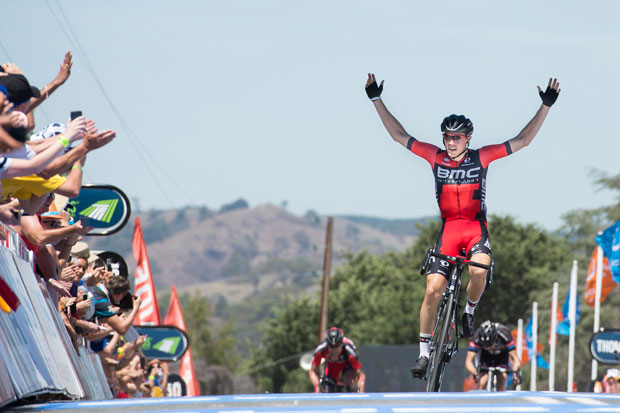 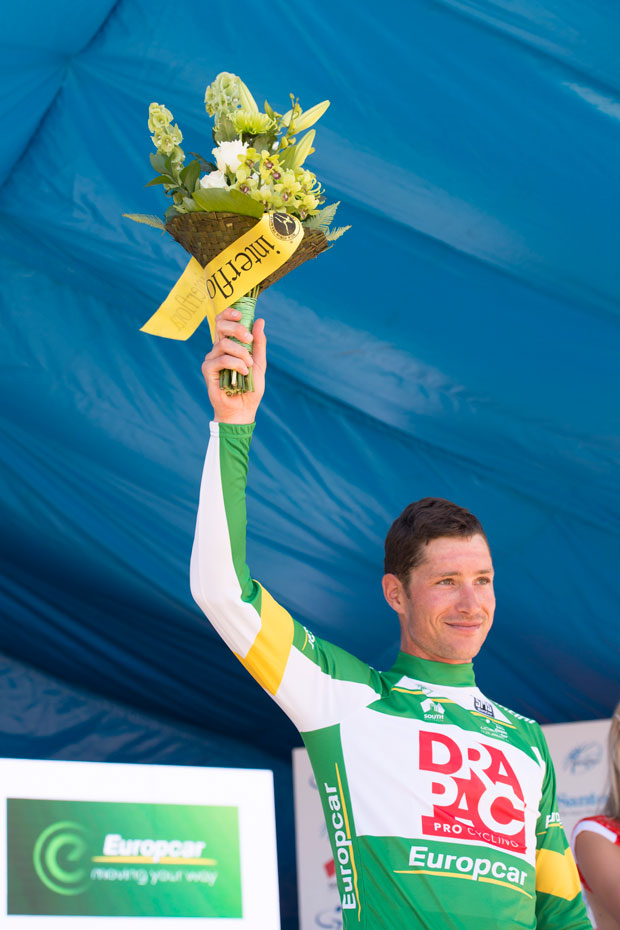 Will Clarke from Drapac is awarded the Most Competitive rider award

EuroTrash Down Under Thursday!