PEZ Down Under: With The Fans

There are many things that make the Tour Down Under one of the best World Tour races of the calendar to visit – from the amazing scenery to the quality racing but the TDU wouldn’t be the race it is without the fans. Our man Down Under David Pearce played the fan on Stage 4 and caught up with some of the crowd that make that atmosphere happen.

Words and photos by David Pearce. 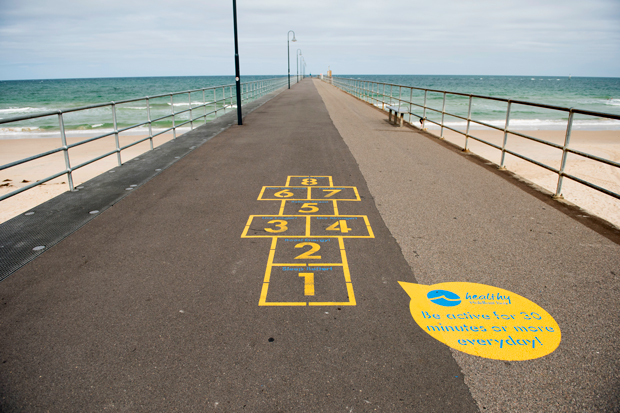 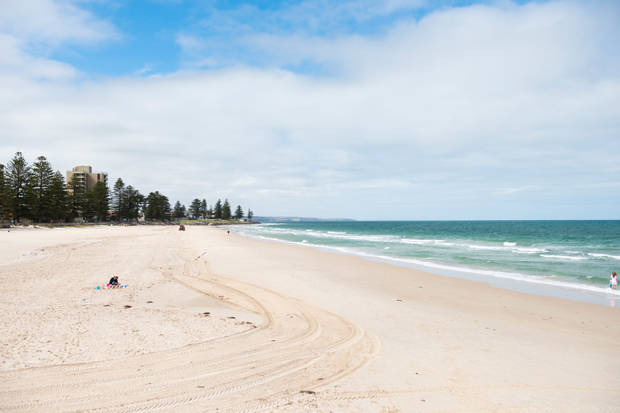 The beautiful beach at Glenelg

After yesterday’s excitement of riding in the team car I thought I would focus a little more on the spectators today who have taken time out of work to follow and support the race. As you would expect the start and finish areas are a hive of activity with throngs of people hoping to see their favourite riders in person. The air was filled with a cacophony of sounds, mainly from fans attempting to get a rider’s attention either vocally or with an ensemble of instruments made from anything at hand. Before fully ingratiating themselves into the atmosphere a number of fans arrive early to grab some breakfast, many having ridden to the start. It makes for a great atmosphere. 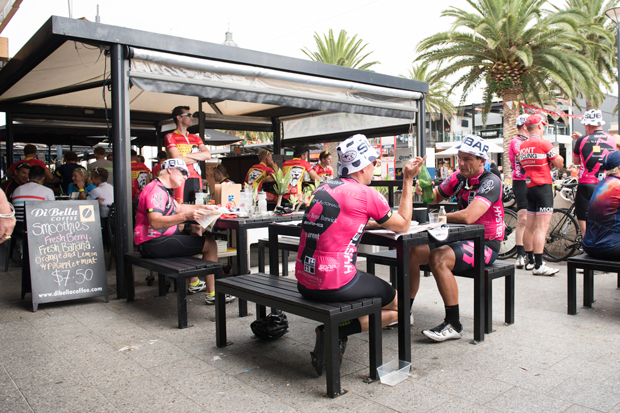 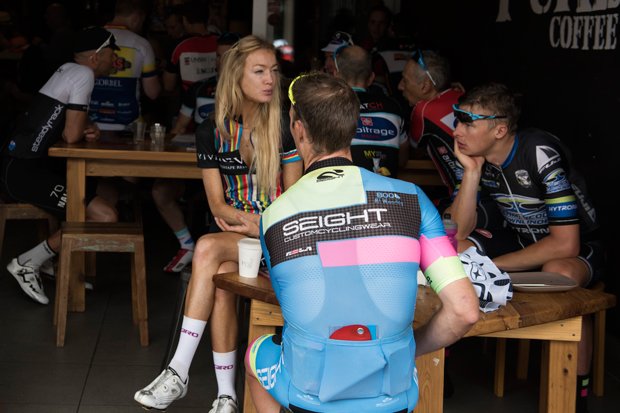 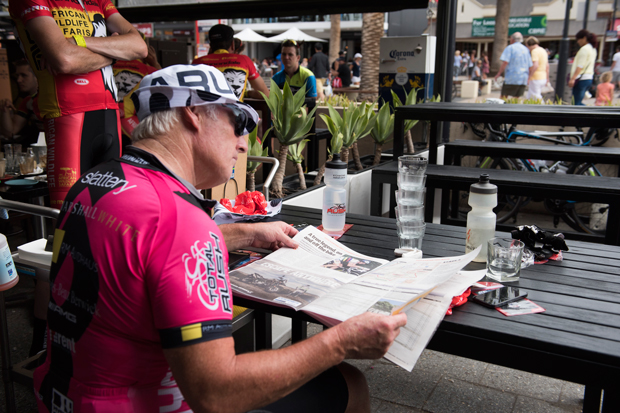 Catching up on the previous days news. 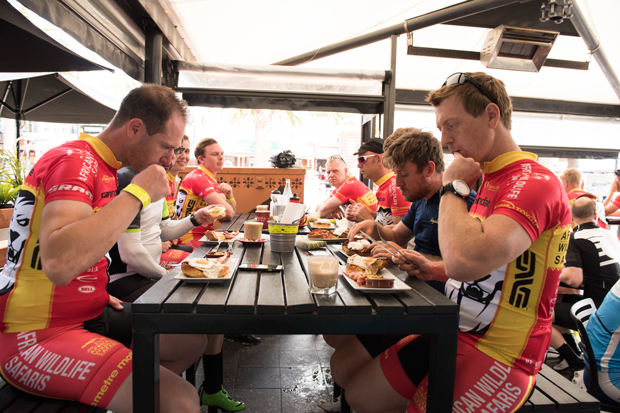 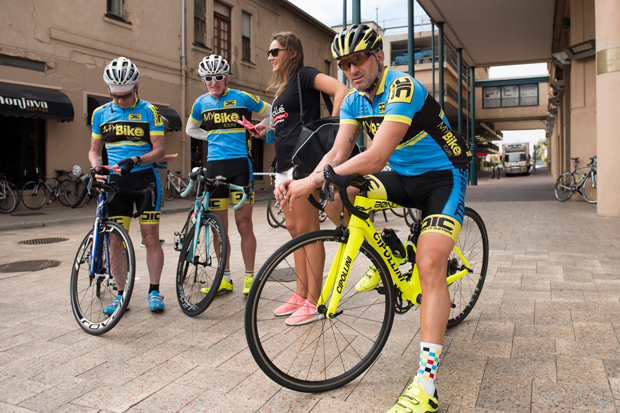 Often bicycle touring companies follow the tour. The riders on this one will cover up to 1000km this week.

The atmosphere can be quite deafening at times with hundreds of people autographing hunting in unison. The canny ones walk away from the signing area to where the team cars are located asking one of the support personal to request an autograph. Although not always successful it is worth the effort and if very lucky they may get a team musette if they respect the riders time and pre-race preparations. 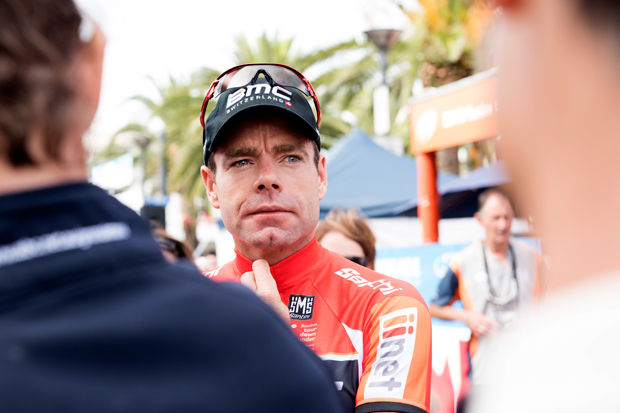 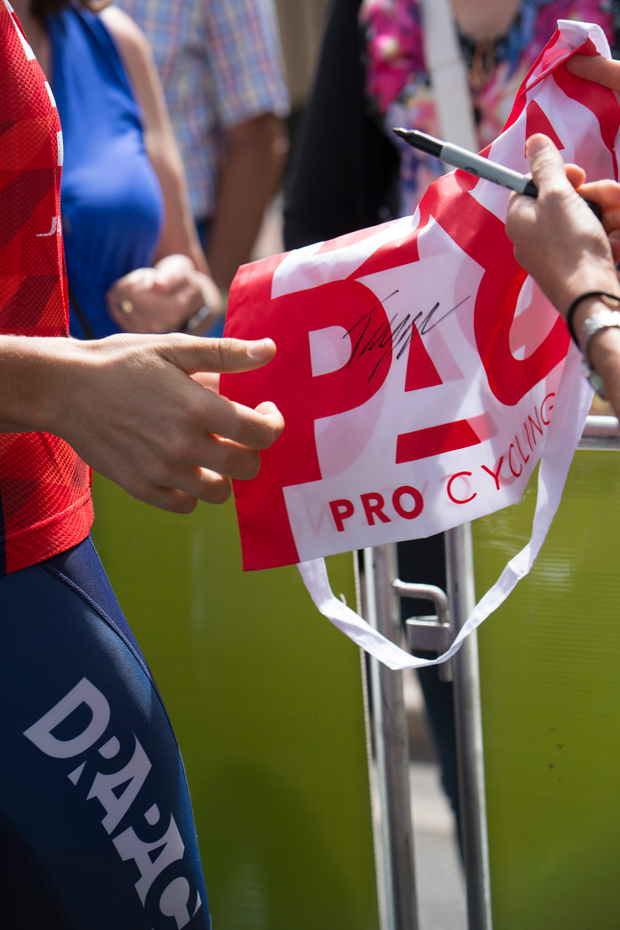 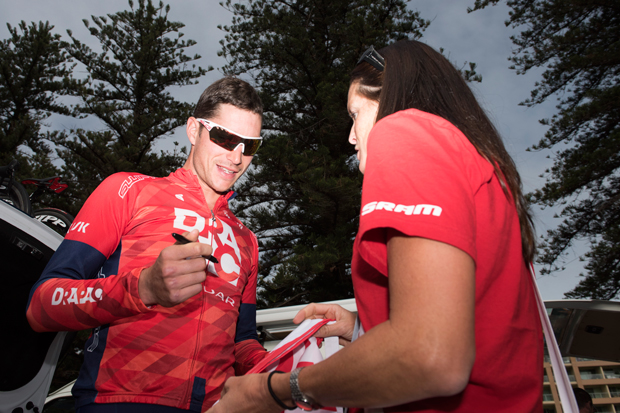 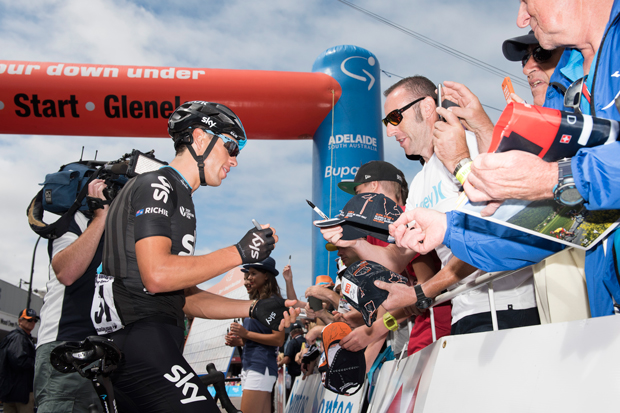 Richie Porte always seems to be happy to please the crowds and sign a few autographs.

The riders themselves seem to enjoy being based in Adelaide for the duration and not on the road travelling to the next stage start. The outside of the Hilton (where the whole tour stays) is always buzzing at the beginning and end of the day where rider spotting is impossibly easy. Here the entrance is mobbed as the riders walk freely through them.

For those fit enough some of the most exciting spotting is often out on the road post race as the riders are renowned for riding back to Adelaide from the stage finish after a short recovery.  I can’t imagine riding home for another 30 or 40km after a hard days racing. My legs would have shut down and begged for rest! Speaking of legs I spoke with Will Clarke from Drapac this morning to enquire how his legs felt after his breakaway yesterday. He thought they were OK but would not know for sure until the stage started.

Stage 4 today went from the popular seaside city of Glenelg to Mt Barker passing through the outskirts of McLaren Vale to Sellicks Hill where the first climb would be contested. Before the race departed a few riders declared their aspiration for the stage with Barry Markus (Lotto NL-Jumbo) saying it might be his day if the expected sprint finish happened as the cooler conditions were more favourable for the Europeans. Marcel Kittel was also ready for a sprint finish although stating his main goal as helping teammate Tom Dumoulin with his GC aspirations. Ian Standard from Sky congratulated BMC on riding a great race so far but confirmed the team was very much motivated for Richie Porte’s GC ambitions. I personally am expecting Richie to attack tomorrow trying to take the GC ahead of the final day.

The climb up Sellicks Hill, 44km into the stage provided a lovely opportunity to photograph the riders with the ocean as a backdrop. To get the shots below required me to exert some energy climbing through some bush to get as higher vantage point as I could find. It was then a case of waiting for 30 minutes to capture the shot being mindful of any snakes that may have taken an interest in me!

Eventually four riders, Jack Bobridge, Australian Michael Hepburn (Orica-GreenEDGE), Frenchman Cedric Pineau (FDJ) and Brit Peter Kennaugh (Team SKY) appeared in a breakaway after a flurry of attacks at the start to test BMC. They had gained two minutes on the field meaning Bobridge was the race leader on the road. He knew he would be a target for the peloton but his ambitions lay elsewhere today with the Subaru King of the Mountain contest and managed to cross the line ahead of the other 3 riders to take the KOM. 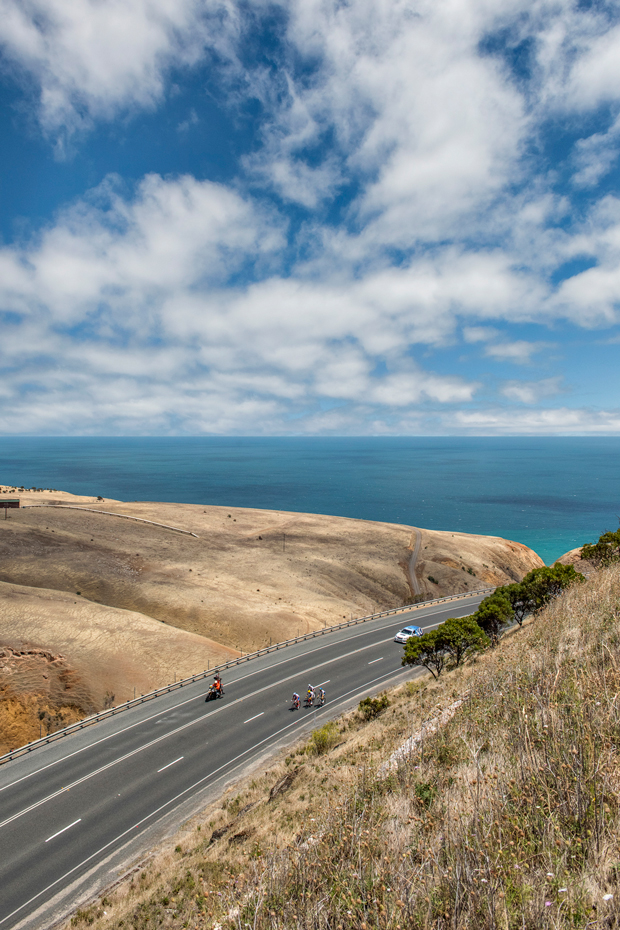 The views from my vantage point were sensational. It was worth the effort to climb up. 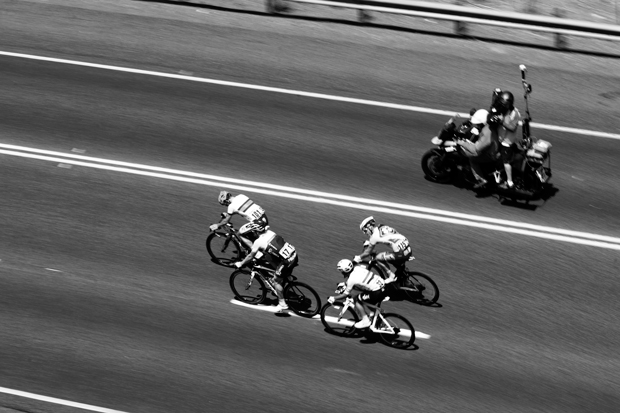 Looking down on the race 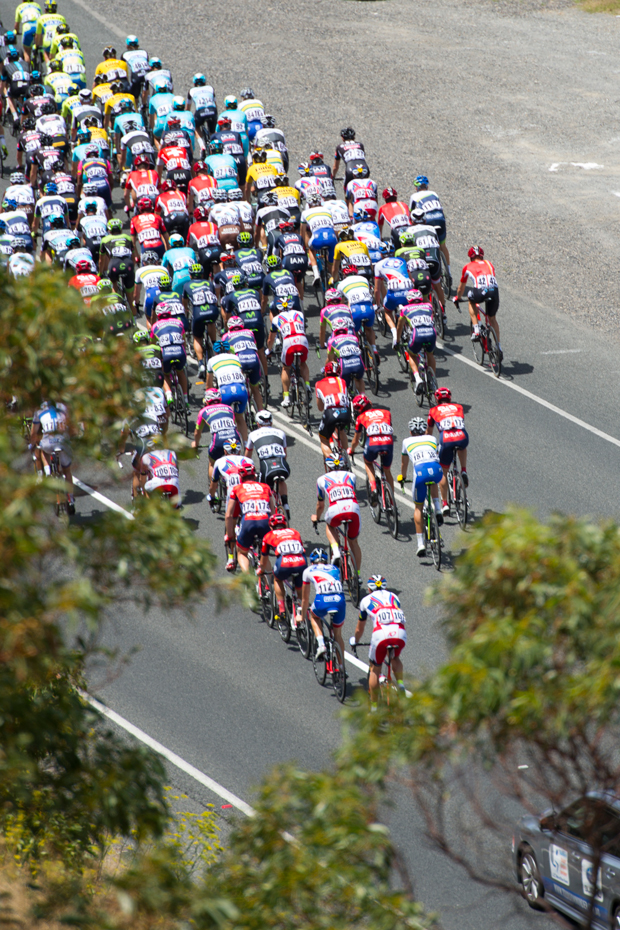 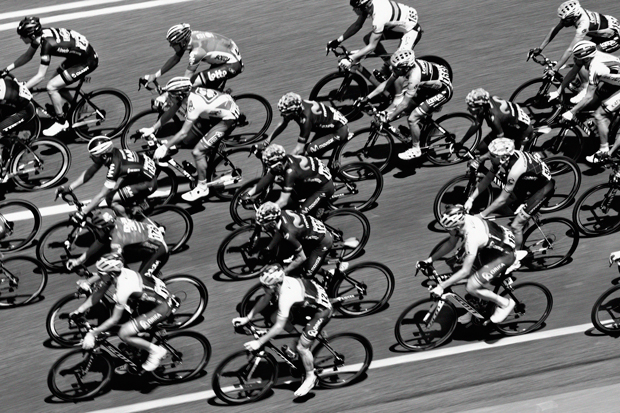 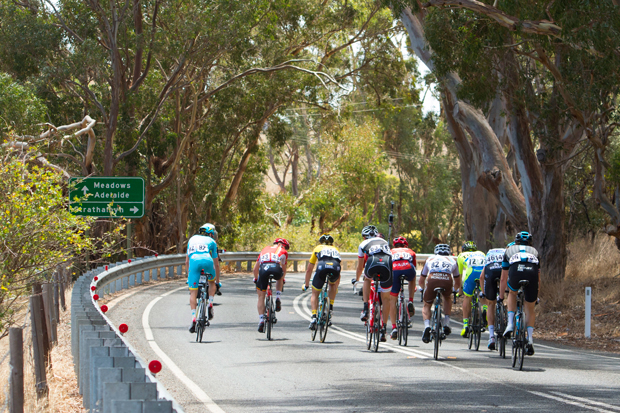 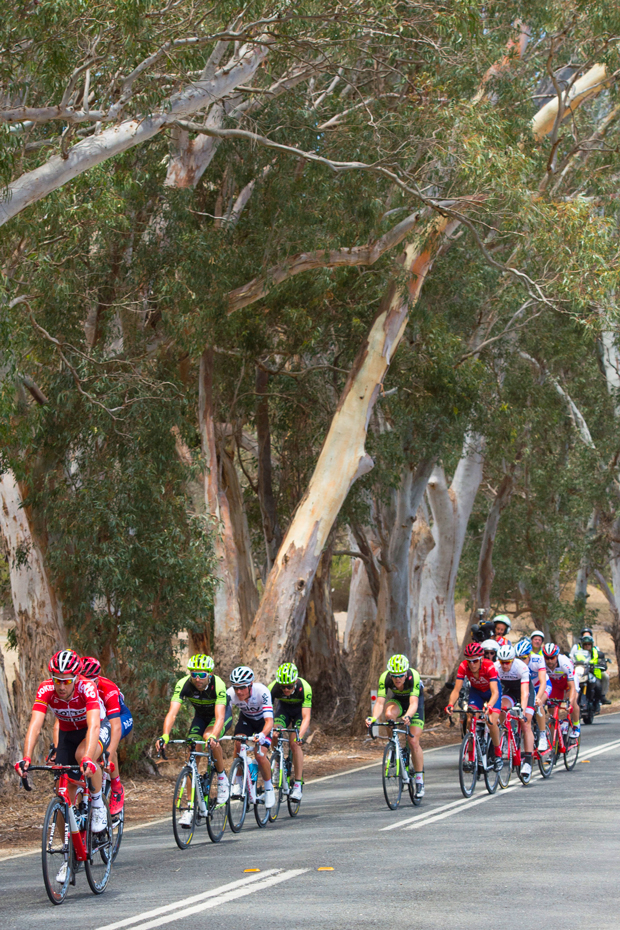 It may seem odd to say but the trees here in South Australia are quite magnificent. 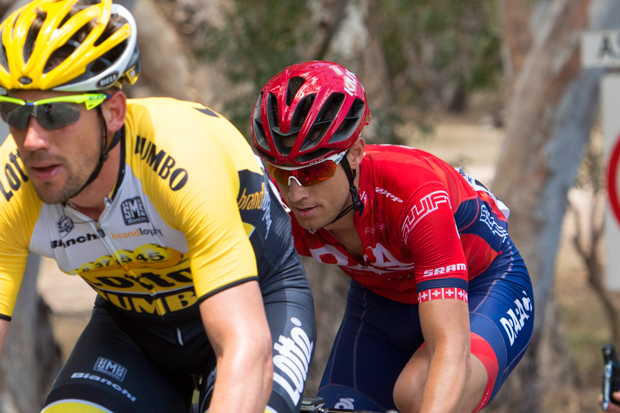 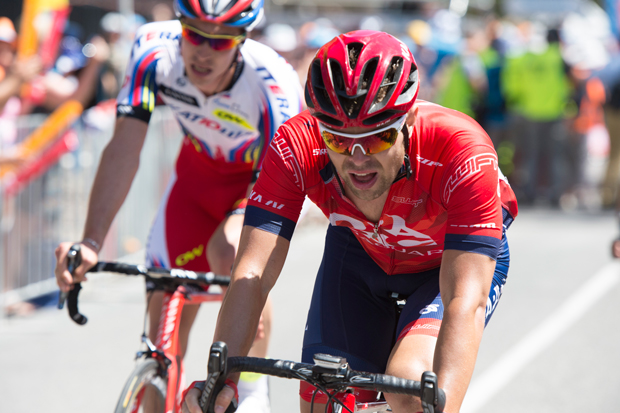 Wouter Wippert just after the finish.

Moving forward to the finish Steele Von Hoff crossed the line at the end of the 144.5 kilometre stage in a time of 3:24:28 holding off South African Daryl Impey (Orica-GreenEDGE) with Dutch rider Wouter Wippert (Drapac) third. Chaos ensued behind as a crash in the bunch saw multiple riders go down and wheels literally flying through the air. Van Hoff commented that “Jack Bobridge was looking after me, he was telling me ‘be patient, be patient’. I trusted him and he delivered me where I had to be. He told me to mark (Etixx) Quick Step (team) because (Mark) Renshaw was there and I managed to find my way to victory.”

Tom Southam, Sports Director for the Drapac team said post race “I really wanted full commitment from everyone and we got it today. The boys came together well and it showed. The result is good and hopefully we can move up a few spots on Sunday,” In the crash, Travis Meyer from the team flew through the air and went down hard. He was taken to hospital for x-ray and was later confirmed to have fractured his hand and has withdrawn from the race. “It is a blow for us to lose Travis today,” Southam said. “He has performed well all week and today was vital in the sprint for us.” Looking back at the video Meyer did a full somersault through the air and it looks like his wheel flew through the air at over 12ft high. 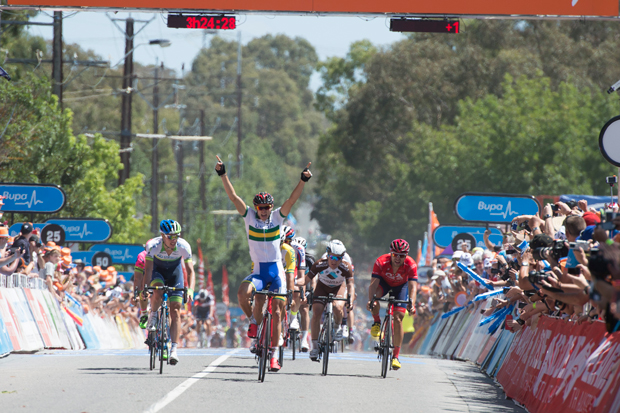 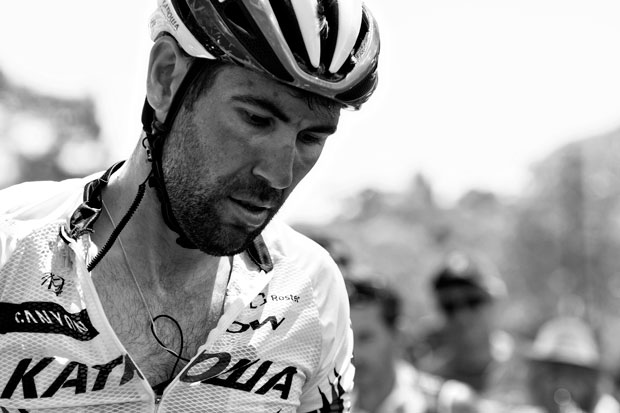 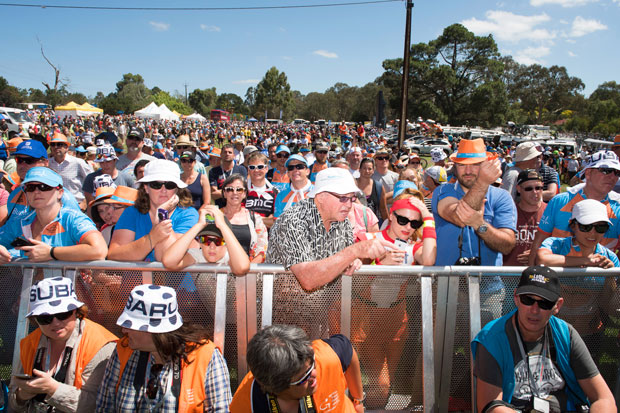 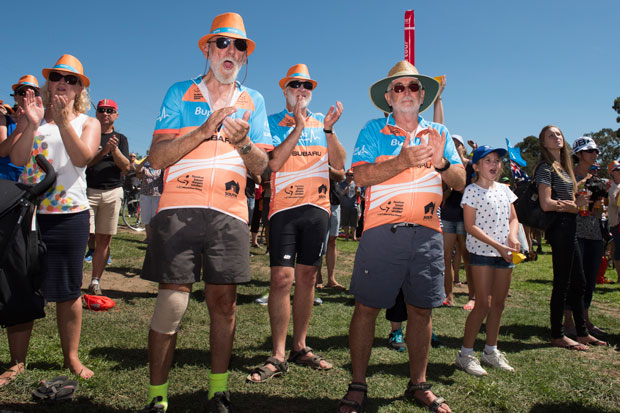 I also had the opportunity to speak with Wouter Wippert from Drapac about the stage today and discuss the teams aspirations for tomorrow. He told me that he was pleased to have got up the long drag to the finish with teammates Graeme Brown and Travis Meyer taking him to 300m to go. With Kittel not holding on to the frenetic pace and dropping back he had a great chance. With a slight down hill and tail wind he hit 80kph but could not find enough speed to take the win coming in third place overall.

Tomorrow will not be a day for the sprinters with Willunga Hill so the team will be working for Tim Roe who is hoping for better fortune than he had on Stage 3 where he broke the spokes on his wheel at 4km to go.

Jasper De Buyst looks back on the World Cup in Cali