TDU Photo Special: The Santos Tour Down Under, 2017’s first WorldTour event of the year was won by BMC-TAG Heuer’s Richie Porte, it wasn’t a big surprise as the man from Launceston was race favorite before the start. Six stages, but only two winners; Porte took two stage wins and the little Orica-Scott rocket, Caleb Ewan won four. Yes, it was repetitive, but boring it was not. 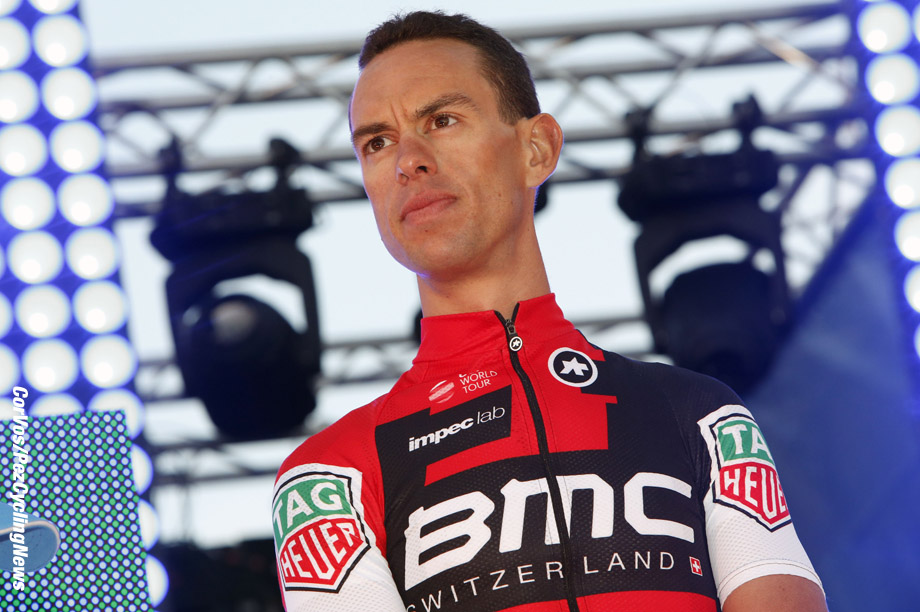 Eventually Richie Porte wins the Tour Down Under overall

Hot weather greeted the peloton in the South Australian town of Adelaide and Cor Vos had his photographers ready to catch all the action. Here is the PEZ Santos Tour Down Under photo wrap. 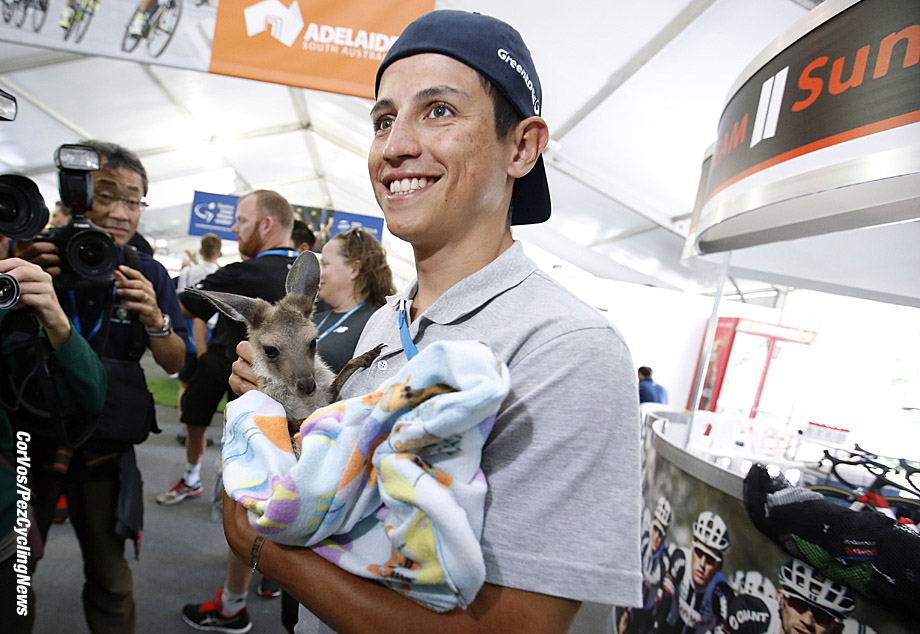 Caleb Ewan won Stage 1 of the Santos Tour Down Under and the first event of the 2017 WorldTour. The Australian out-sprinted Sky’s Danny Van Poppel and Sam Bennett (Bora-Hansgrohe). Bennett was given a perfect lead-out by teammate and World champion Peter Sagan, but Ewan and Van Poppel came round the Irishman before the line. Ewan takes the first leaders jersey. A shortened stage from 145 kilometers to 118 kilometers, the distance reduction was due to the temperature which was above 40ºC. 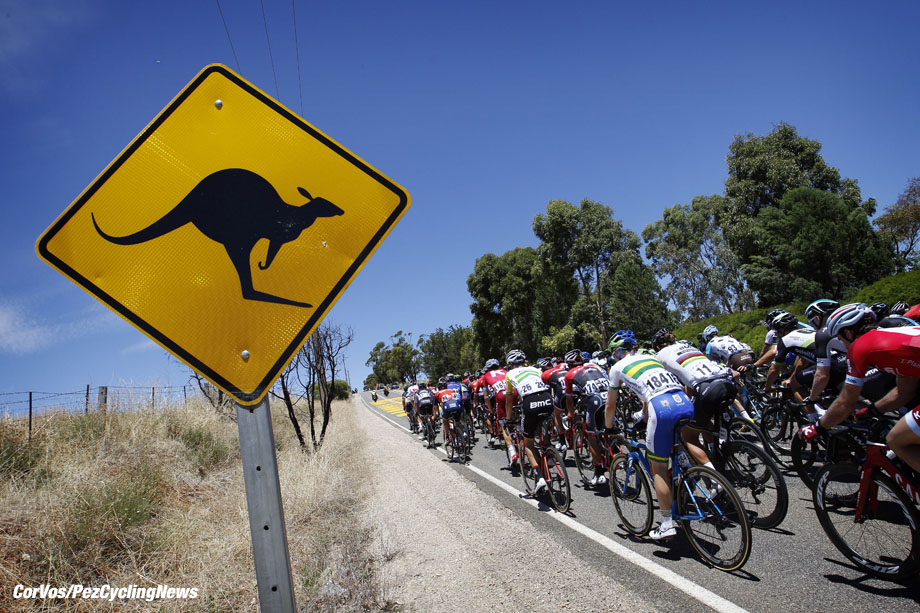 Watch out for the kangaroos!

Laurens De Vreese (Astana) made a solo attack after only 3 kilometers and rode nearly 100 kilometers out front, but was caught inside the final 20 kilometers. 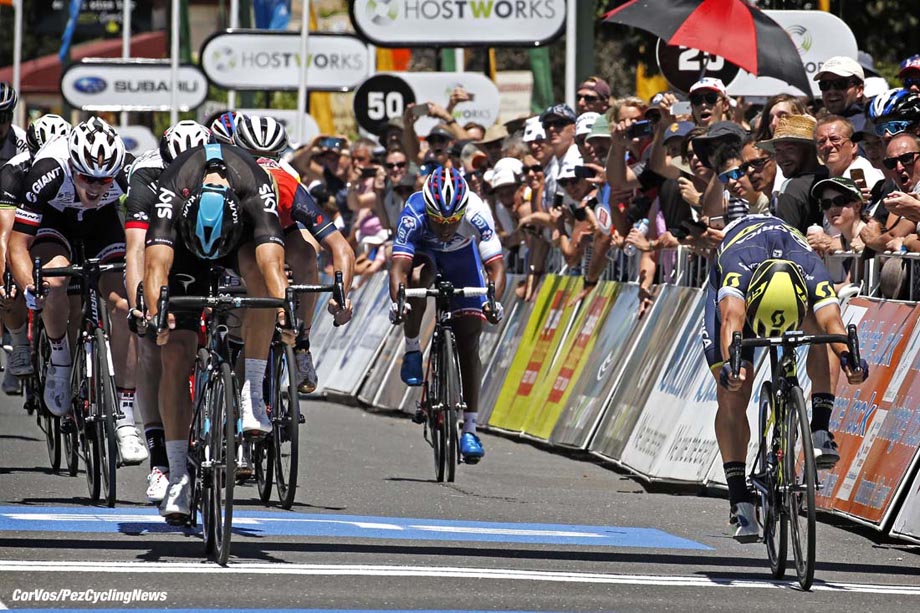 The first of four stage wins for Caleb Ewan

Richie Porte claimed the win on Stage 2 with a brilliant solo attack at the base of the Paracombe climb. Porte crossed the line 16 seconds in front of Gorka Izagirre (Movistar) and Esteban Chaves (Orica-Scott) to claim the leader’s ochre jersey with a 20 second advantage. 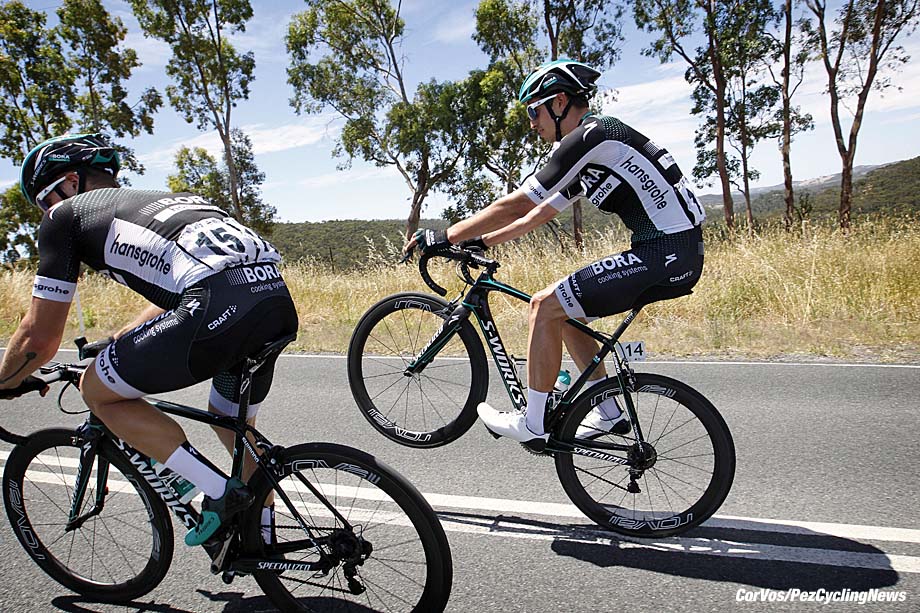 The Bora-Hansgrohe riders practice their wheelies

Jasha Sutterlin (Movistar) launched a solo attack after the first lap and gained a five-minute advantage. The peloton picked up the speed and caught Sutterlin in the final 40km, making way for the battle for position on the approach to the Paracombe climb. 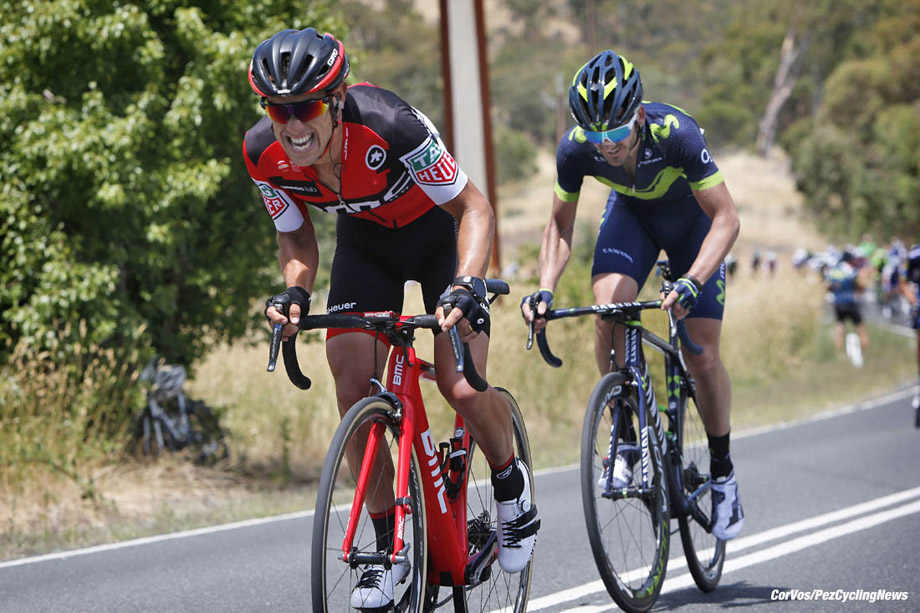 Porte’s BMC teammates brought him to the front and as the peloton reached the base of the climb, Porte put the hammer down and made his solo move. 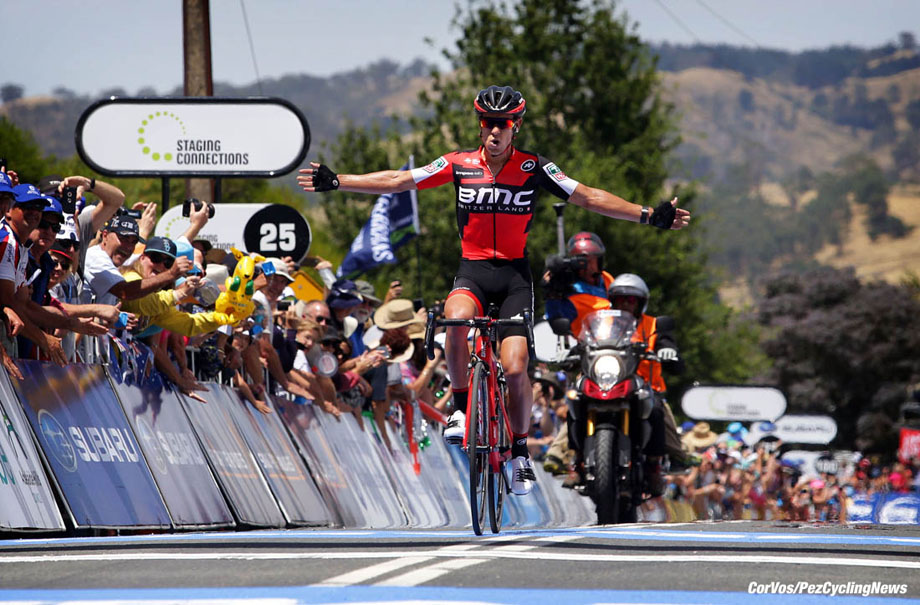 Stage win and overall lead for the BMC man

After a day for the GC riders, the Tour Down Under turned its attention to the sprinters again on Stage 3. After a tough stage where the break dominated, the sprinters stepped up in the finale. Slowed by a crash in the final few kilometers, World Champion, Peter Sagan, took second, narrowly losing the win to Caleb Ewan. Richie Porte crossed the finish line unscathed to retain his overall lead with three stages remaining. 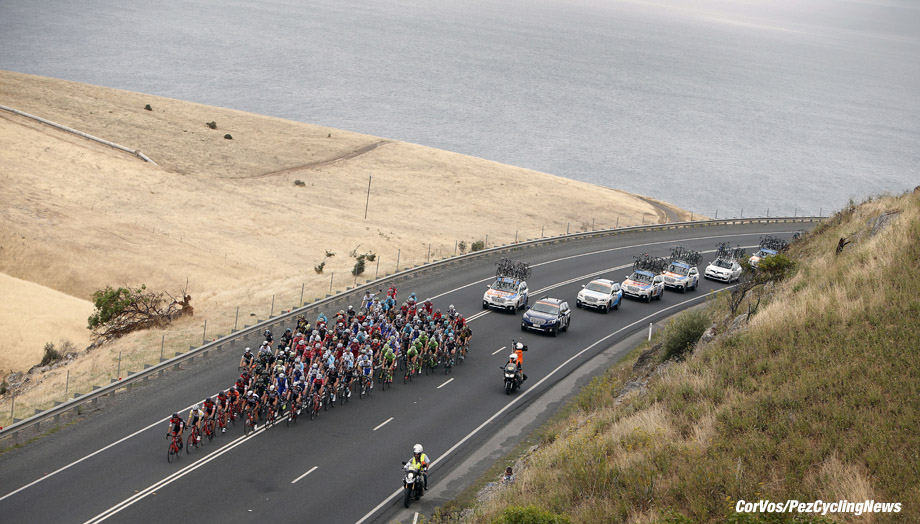 From the drop of the flag at the start of the day, the day’s breakaway formed as a quartet went up the road, quickly building an advantage of almost five minutes as the day progressed. The peloton was in no hurry to pull the escape group back and this group of four stayed out in front much of the day. 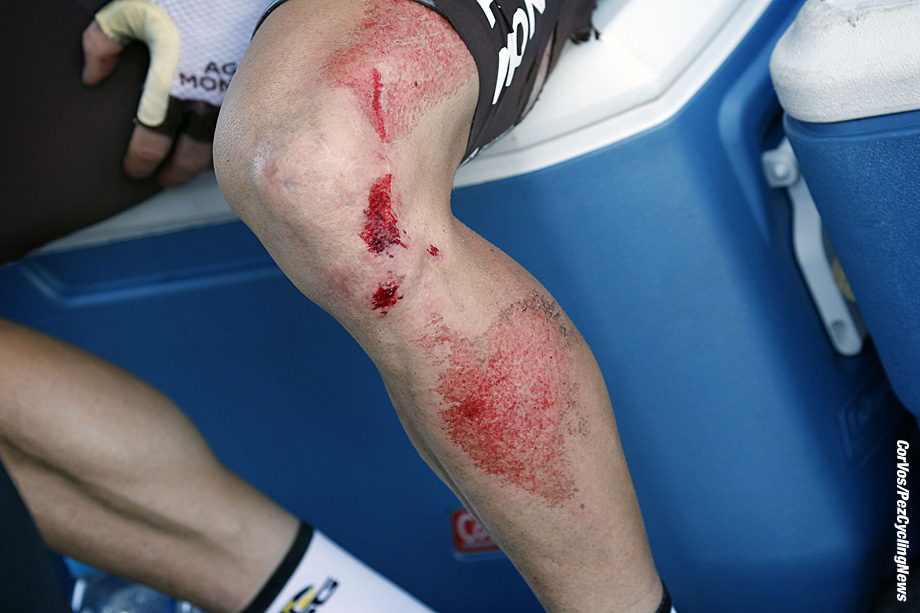 With speeds hitting up to 70km/h, the peloton was a dangerous place to be, with a crash in the last few kilometers, right in front of Sagan. The World champion skillfully avoided the crash, but was slowed in his ride to the finish line. After threading his way through the sprint trains and pushing hard in the bunch sprint, the Slovakian rider narrowly missing the win, taking second to the little rocket Ewan. 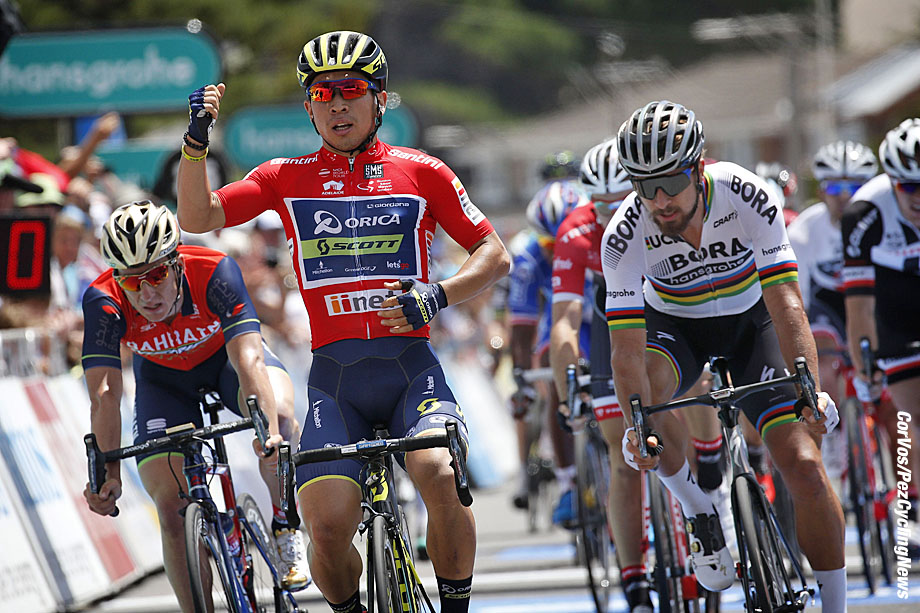 The breakaway dominated much of Stage 4. However, after leading from the 12 kilometer mark, the sprinters again swallowed up the escape with kilometers to spare and fought it out for glory at the finish line. Caleb Ewan beat World Champion, Peter Sagan for the win. Richie Porte crossed the line safely after a hectic finale, to retain his overall lead. 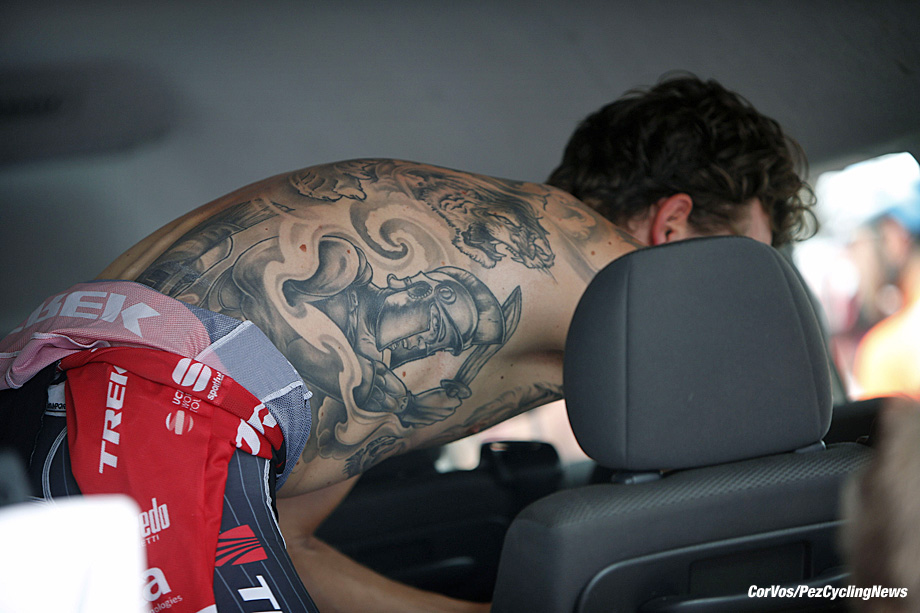 Koen de Kort has taken the tattoo to a higher level

The parcour, while undulating, did not feature any particularly challenging climbs, and encouraged aggressive riding. A three-man breakaway went up the road and stayed out much of the day. The break began to fall apart with 50km to race, with counter attacks from the peloton. The final rider, Jack Bauer (Quick-Step), pushed hard, but was reeled in with just a few kilometers to go. 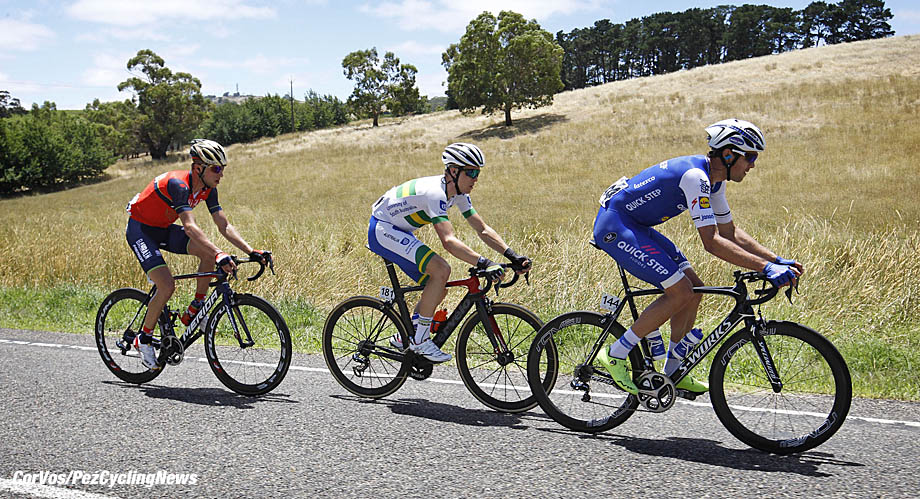 As riders jostled for position the sprinters clashed on the run in, but it was Caleb Ewan who took yet another stage win. 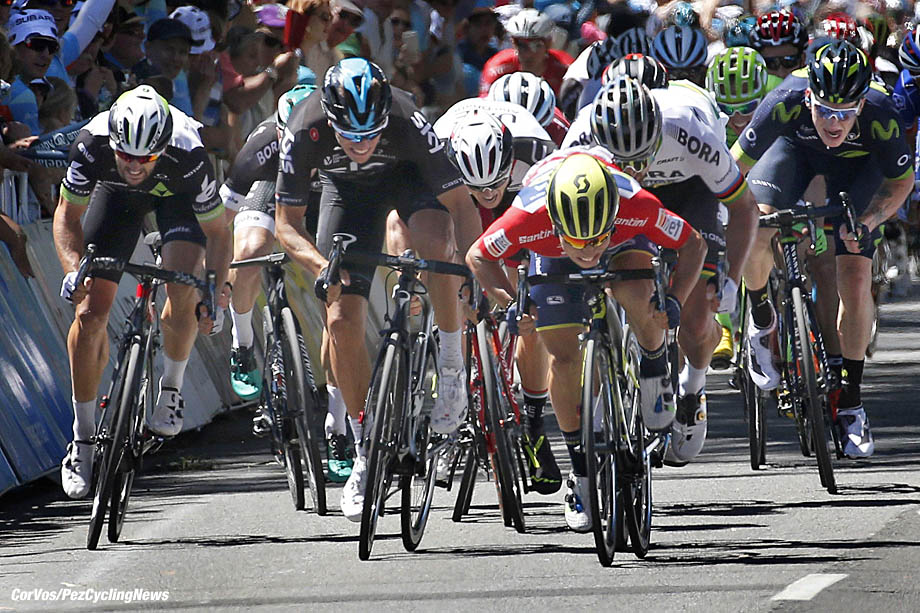 Win No. 3 for Ewan – could he get any lower over the front of his bike?

Stage 5 saw Richie Porte take his fourth consecutive win on Willunga Hill, with a stunning solo attack on the final ascent of the climb. Porte crossed the line with a 20-second advantage on Nathan Haas and Esteban Chaves, to extended his lead to 48 seconds over Chaves in the General Classification. 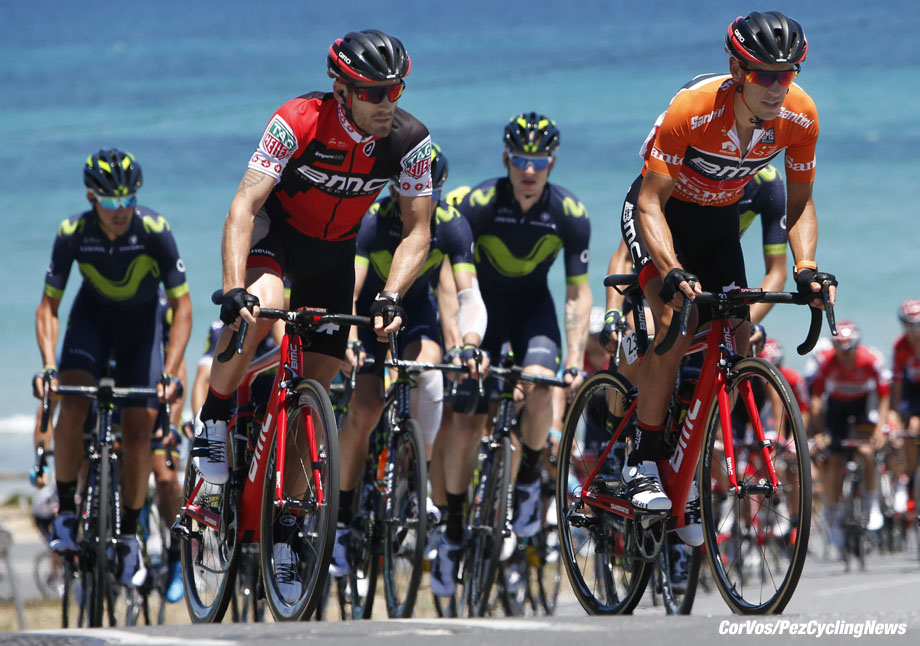 The penultimate stage of the Santos Tour Down Under was the final battle for the General Classification contenders and with Porte holding a 22-second advantage before the stage, the battle for the ochre jersey was far from over. 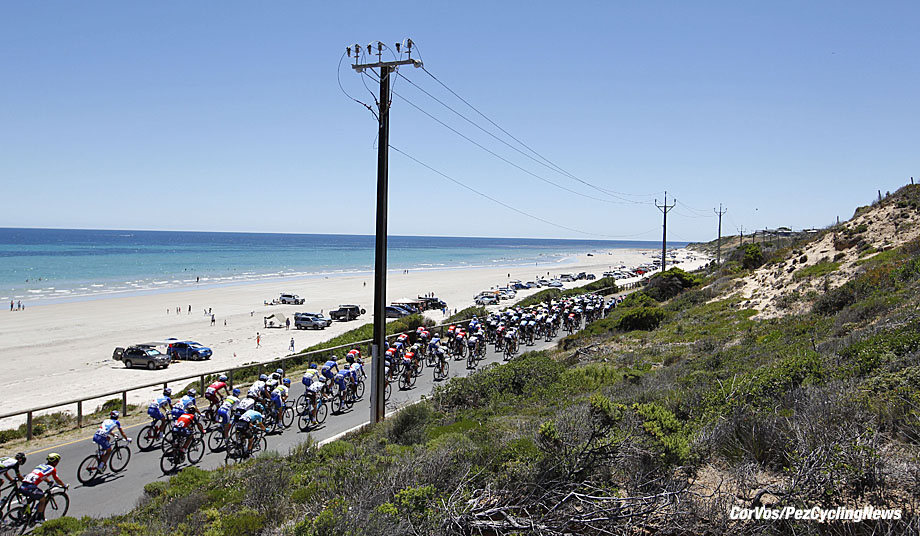 Spectacular beach on the way to Willunga Hill

A four-rider breakaway went clear soon after the McLaren Vale start and built a steady advantage over the BMC controlled bunch. Three breakaway riders remained in front on the first ascent of Willunga Hill but will 10km to go the reduced peloton was closing in. 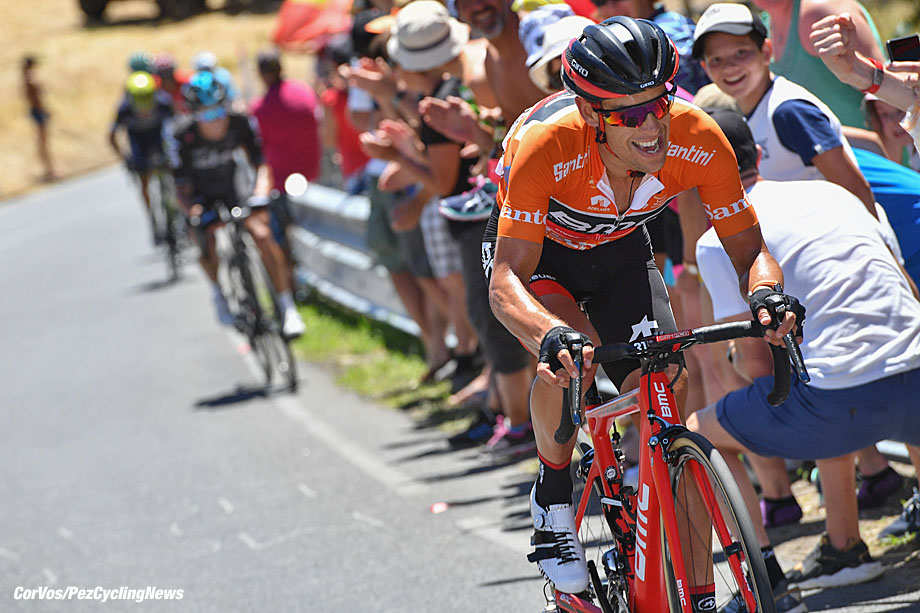 At the bottom of the final ascent it was a small group of riders left with Porte joined by teammate Rohan Dennis. As riders began to drop, Porte attacked with 1.7km to go and managed to accelerate clear of his rivals and take the solo win for the fourth time in his career. 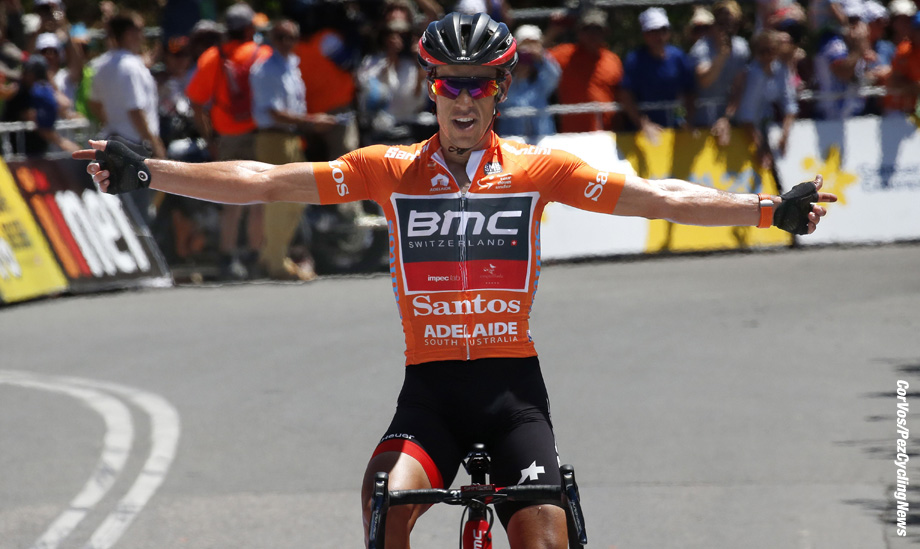 The sweet taste of success for the man from Launceston

Richie Porte crossed the finish line of the Stage 6 criterium to secure the overall win in the Santos Tour Down Under for the first time in his career, after standing on the podium in 2015 and 2016 in second place. With a 48-second lead before the stage, Porte was kept safe by his BMC teammates as the peloton tackled the 20-lap circuit around Adelaide to retain his lead. 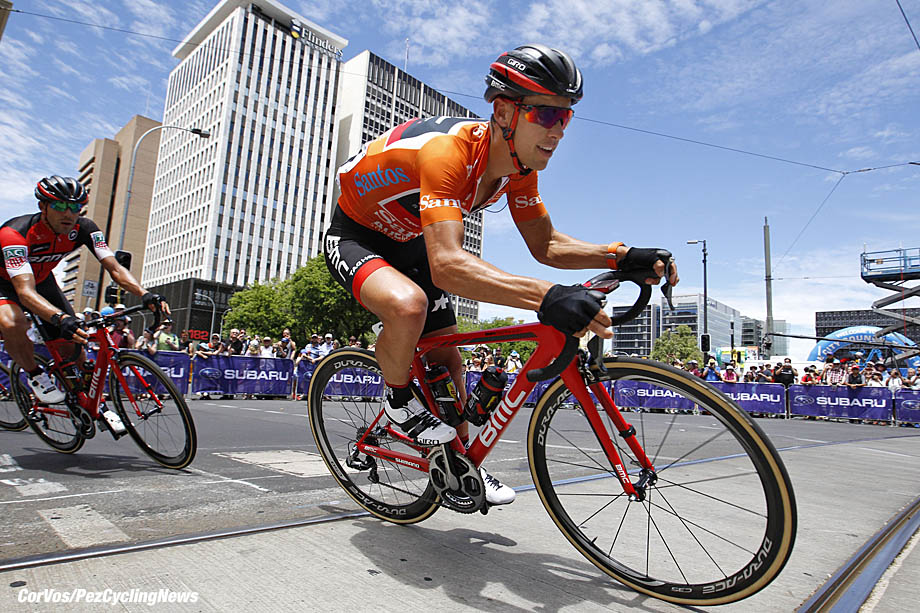 Porte played safe on the Adelaide streets for stage 6

The racing didn’t disappoint, with the first intermediate sprint hotly contested and won by Jay McCarthy who moved himself within three seconds of Chaves and into third overall on count-back. A bigger breakaway group then formed, easing the pressure as they swept up the second intermediate sprint points with no threat to the overall contenders. 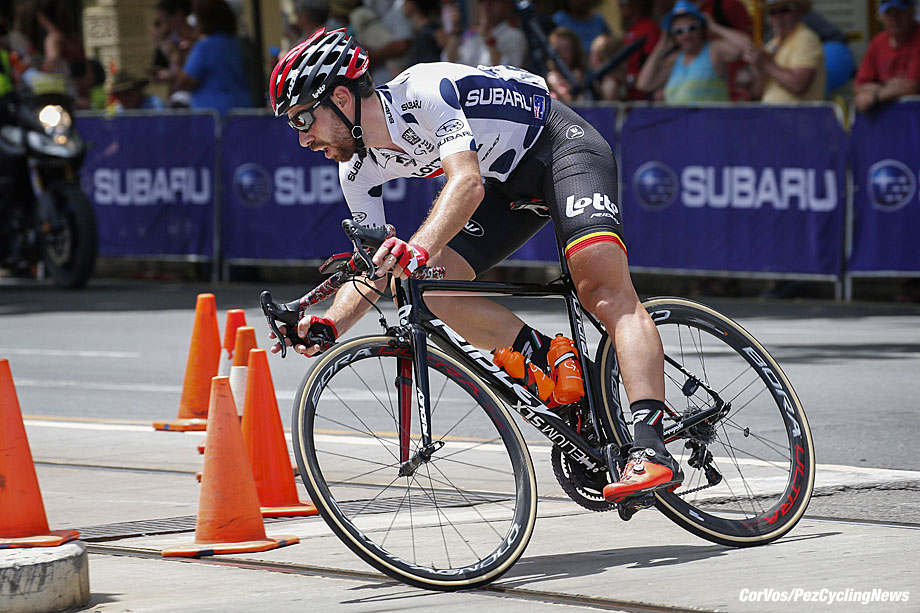 Racing calmed down in the build up to the crucial final sprint. Caleb Ewan again showed he was the fastest rider in the field to claim his fourth stage, whilst the minor placings eliminated any threat to Chaves’ overall standing. Jay McCarthy took 3rd overall from Nathan Haas and Thomas De Gendt (Lotto Soudal) won the King of the Mountains. 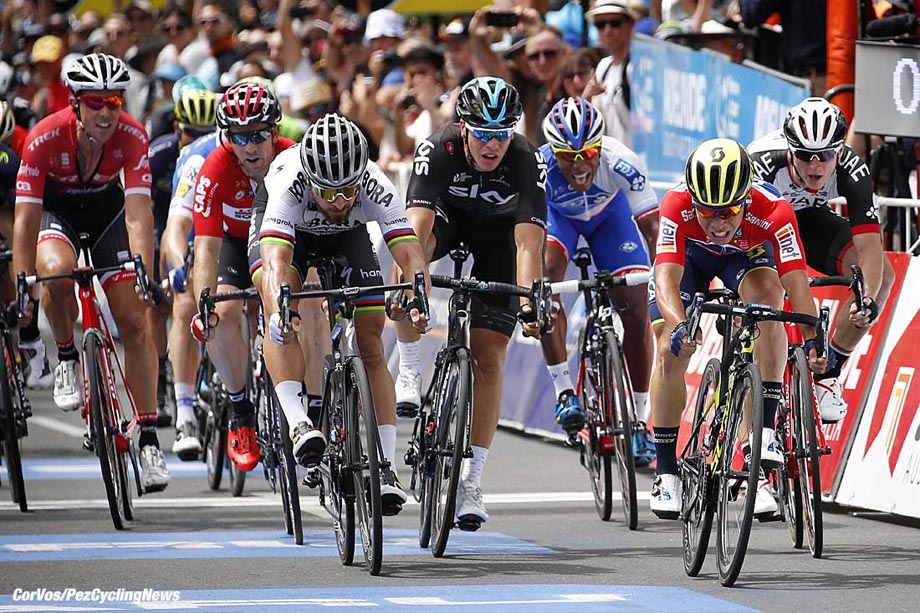 Caleb Ewan finished off with win No. 4 at the expense of Peter Sagan, again

2017 Santos Tour Down Under overall winner, Richie Porte (BMC-TAG Heuer): “It’s an incredible relief. I think back to nine years ago when this race really kicked off my career. This is where I came a wild card. Then two years later I was in the WorldTour. So to win it is a massive relief. I’ve been close two times before so it just feels fantastic. Cycling is kicking massive goals in Australia with the crowds you’re seeing on the road.”

The Tour de France next?

The 2017 Santos Tour Down Under winners: Restrepo, Porte, Ewan and De Gendt

Toolbox: Inside Or Out?

ASSOS Partners as Title Sponsor for the Malibu GRANFONDO