With the racing almost as hot as the weather Down Under it’s time to take a closer look at what’s ahead for the riders in Thursday’s Stage 3 which could well turn the GC upside down.

Stage 3 of the Santos Tour Down Under sees the riders travel 145km from Norwood to Campbelltown. 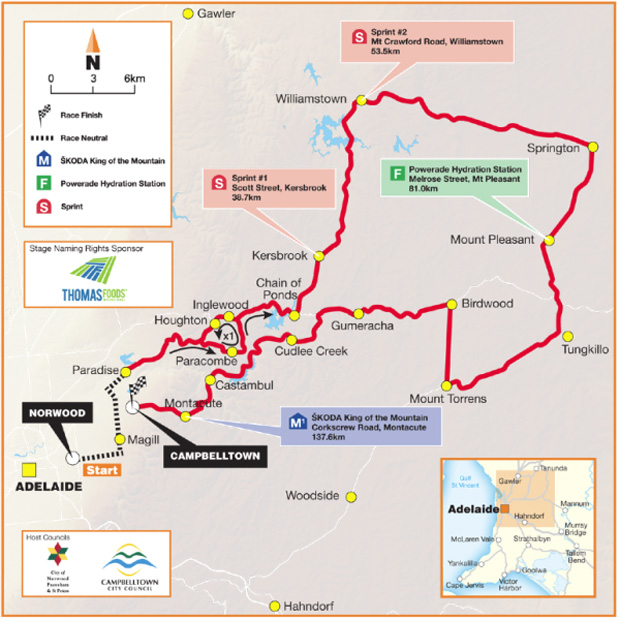 We have 2 sprint points, with time bonuses, which could interest some of the GC riders. It will of course, depend on how many men get in the break.

There is only 1 categorised climb, but it’s a beauty! Corkscrew Road is 2.55km at 8%, with some ramps over 20%. It has 4 hairpin bends and is constantly turning. Attacking riders are quickly out of sight of the peloton and can build a dangerous gap. It crests only 7km from the end of the stage, so a small group can easily stay away.

2013 was the first time the climb featured in the Tour and it produced some quality racing. Geraint Thomas, Team Sky, managed to get away on the climb and he was joined on the descent by Javier Moreno, Ben Hermans and George Bennett. The peloton was close but couldn’t make the catch and Thomas won the sprint. 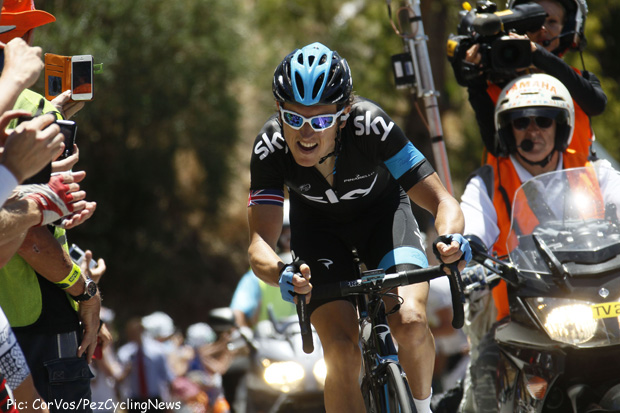 Geraint Thomas on the attack on the Corkscrew last year.

As Simon Gerrans is the King of Willunga Hill, any rider with aspirations of winning the GC needs to attack him here. Team Sky were one of the many teams to train here before the race, and I would expect attacks from Thomas and Porte. The climb is only 2.5km so gaps will not be huge and Orica GreenEDGE have an incredibly strong team so they will obviously try to control the race. Gerrans lost time here in 2013, due to breathing problems, connected to his asthma. Can lightning strike twice?

Just like in 2013, I would expect to see a small group get a gap on the hill. The finish is different though this year as we go to Campbelltown for the first time.

Orica GreenEDGE have been excellent so far. They have controlled the race and put Gerrans into great positions, they will expect attacks today. As the climb is only 2.5km, they should be able to control affairs. I would expect to see Team Sky hit the climb very hard and try to put as many riders as possible under pressure. With Porte and Thomas, they have 2 riders capable of breaking away. Orica will need to have at least 1 rider left with Gerrans at the top of the climb, to help with the chase on the descent, as other teams will not help.

I would also expect to see attacks from Garmin-Sharp, especially Rohan Dennis. The local boy seems to have recovered from his crash and will try to get away on the climb. He is an excellent time trialist and is capable of staying away on the descent.

Stage 2 winner Diego Ulissi, is another rider in great form. The climb will not cause him problems but descending has never been a strong point. I would be surprised to see him attack on the climb and think he will hope that the race comes back together for a sprint.

If we do have a reduced peloton sprint, I can’t see past Gerrans. He has already proven his sprinting legs, by beating Andre Greipel, on stage 1.

If it comes back together, on the descent, and teams only have 1 or 2 riders, look for an opportunistic attack from 1km. This happened a few times in the 2013 Vuelta and suits a strong rider like Adam Hansen.

Other dangerous riders to watch for include Robert Gesink, Jan Bakelants, Javier Moreno and Cadel Evans.

There are so many dangerous riders, Orica will have to be at their very best. With only 7 riders in a team, it’s hard work. They have Goss, Matthews, Impey, Hayman, Durbridge, Clarke and Gerrans. If the break doesn’t contain a GC threat it would make sense for them to let it go and take all the bonus seconds on offer. This will force another team to chase. It can be a dangerous tactic but it would help to save their riders for the final climb and descent. Will other teams anticipate this and try and put GC threats in the break?

Can Will Clarke get in the break for the 3rd consecutive day? It would be a super-human effort if he does!

With so many different scenarios it looks like being a wonderful race.

Only a crazy man would go against Simon Gerrans.