The peloton hits the beach for Friday’s Stage 4 but the atmosphere will be anything but relaxed with the chance of crosswinds on the road to Victor Harbor. Let’s take a closer look at what’s on offer.

After all the fighting for GC we have our first day for the sprinters, as the riders travel 148.5km from Unley to Victor Harbour. Victor Harbor is a very popular holiday destination and the Tour has visited on a number of occasions. Despite looking like a guaranteed sprint finish, we sometimes get a little surprise. The end of the stage is very technical and knowledge of the finish is a big advantage. 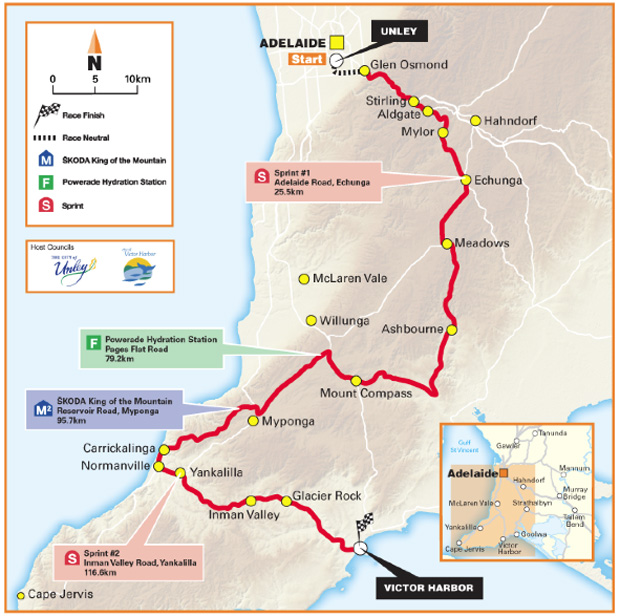 In 2004 it was a fresh faced Philippe Gilbert who attacked late on and stole the stage. The Belgian tried the same move in 2008, but he was caught and Allan Davis took the sprint. In 2009, it was Graeme Brown sprinting to victory and Andre Greipel won in 2012.

Interestingly, the two sprint points are close to the start and end of the race. Simon Gerrans is 12 seconds behind Cadel Evans and I would expect Orica GreenEDGE to try and keep the race together, to set Gerrans up to claim some vital bonus seconds. Here is what his DS, Matt White said,

“We’ve got a little bit of work to do now to get those 12 seconds back, but we’ve also got a couple more stages left to do it and there are plenty of time bonuses available out on the road and in the finishes.”

The stage profile and history does suggest a sprint finish and Lotto-Belisol and Giant-Shimano will ensure that Greipel and Kittel get a chance to win a stage. 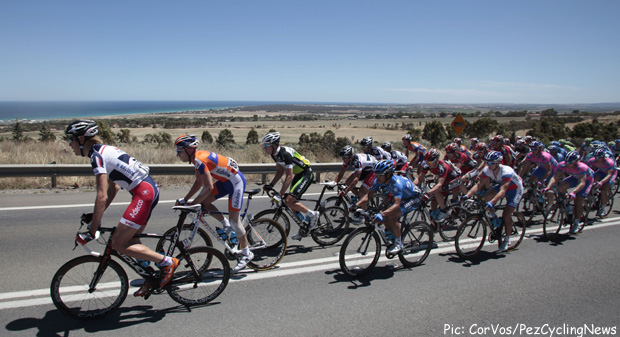 Kittel beat Greipel in the People’s Choice Classic and the Gorilla’s confidence has taken a bashing, after losing in a sprint to Simon Gerrans, on stage 1. I expect him to come back fighting here. As I’ve mentioned, the finish is tricky and Greipel’s knowledge of the course could just tip the balance in his favour.

These two are the fastest sprinters here by a distance but could Orica GreenEDGE continue their dominace and set-up Matt Goss or Michael Matthews? Goss has been the forgotten man. After winning a stage in the Bay Crits, he has been non-existent in the Tour. Has he been saving his legs for this stage? Or will they try and set-up Gerrans for an unlikely sprint victory? If they get some bonuses during the stage, I don’t think this will happen.

These riders are not in the same league as Greipel and Kittel and I would expect a straight shoot-out between the Germans.

Another aspect to take into consideration is the wind. As we approach the harbour, the road is exposed and cross-winds could split the race up. This hasn’t happened in the previous finishes here, but it’s always something you have to think about.

My head says Kittel, but my heart says Greipel!

Greipel’s knowledge of the finish should swing it in his favour, but it will be close.