The day that the spectators have been waiting for and many of the riders dreading has arrived. The sharp rise of Willunga Hill has become an integral part of the TDU and Saturday’s hilltop finish should decide the final GC. Let’s take a closer look.

D-Day for the GC has arrived! We will see all out warfare on Willunga Hill as Evans, Gerrans, Ulissi and Porte go head-to head.

The riders travel 151.5km from McLaren Vale to Willunga Hill. Once there, they do 2 laps of the circuit and finish atop the hill. The organisers have always had Willunga Hill in the Tour but used to have the finish on the flat. It was only in 2012, they changed it and it has quickly become an iconic stage. 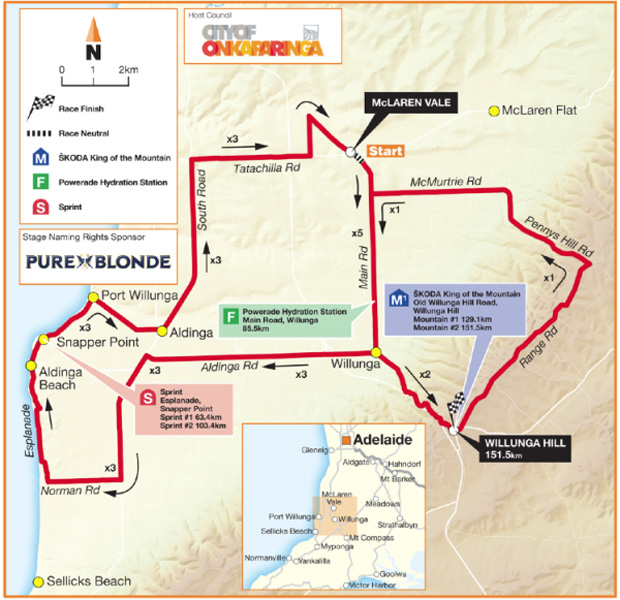 We have 2 sprint points with a potential 6 second bonus if Orica GreenEDGE can manage to hold the break together. Then it’s 2 ascents of Willunga Hill. Expect Team Sky to set a furious pace the first time up, and I’m guessing we’ll have around 20 riders in the bunch when we reach the last climb of the day.

In my opinion, there are only 4 men capable of winning the stage and race: Cadel Evans, Simon Gerrans, Diego Ulissi and Richie Porte. At the finish line there are 10, 6 and 4 seconds available for the top 3. Evans is leading Gerrans by 7 seconds and a further 7 seconds to Ulissi. If he finishes 2nd, behind Gerrans, he has to finish within 2 seconds to keep the jersey. If it is level, then Gerrans will win on count back, just like he did against Valverde in 2012. Even if Ulissi wins the stage, it looks hard for him to claim back enough time to win the jersey. 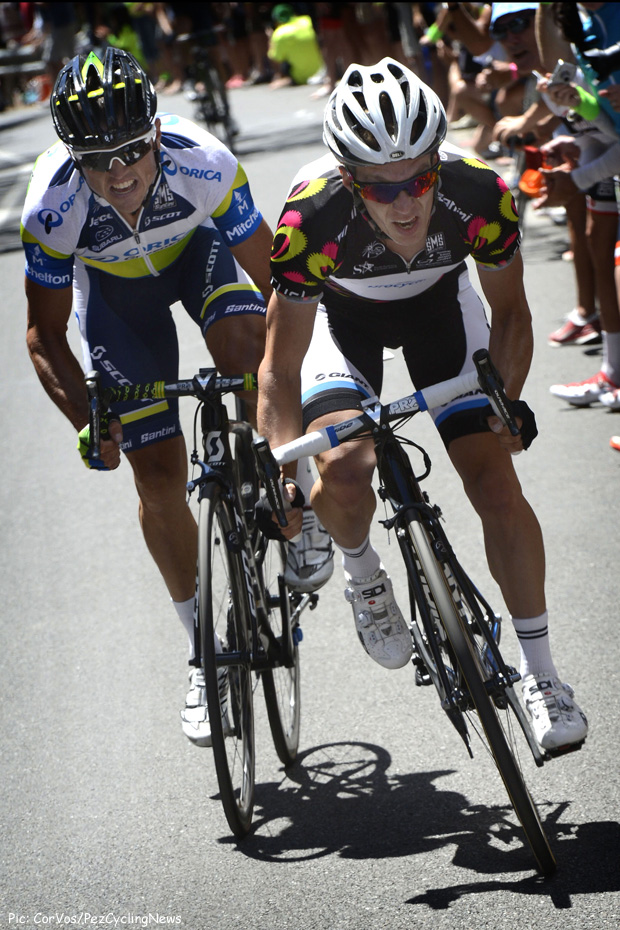 Richie Porte has talked about wanting to get on the final podium, so Sky have to attack on the first climb of Willunga. They will look to put as many riders as possible, into danger and seriously reduce the pack. To reach the podium, they will have to break 1 of the 3 riders already mentioned. This will be difficult as all 3 look in great form.

Robert Gesink is also sitting high on GC, 5th place, at 29 seconds. I don’t think he has the form to win the stage, but could finish in the top 5.

Sky also have Geraint Thomas, sitting 4 seconds better off than Porte. Sky will use the 1-2 approach on the final climb, in the hope of tiring their rivals. For this reason, it might actually suit Gerrans not to be in the race lead. Sky will dislodge BMC’s support riders: Bookwalter and Hermans, and when they do Evans will have to close the attacks himself. Gerrans has an incredible burst of pace on these climbs and he can quickly put time between himself and Evans, even in the last 100 metres.

Geraint Thomas and co. hit the Willunga climb in 2013

Nathan Haas, Garmin-Sharp, is sitting 4th. He is 23 seconds behind Evans and I can’t see him sticking with the big guys on the climb.

If you had given Gerrans this scenario before the race, he probably would have taken it. He needs to win the stage, by 3 seconds, and he will claim the Ochre jersey. It is tiring sprinting for bonus seconds, so Orica might just wait until Willunga Hill before attacking. If Gerrans is still sitting behind Evans with 100 metres remaining, he will win and take the race lead.

That being said, you can’t write off Cadel. Back in 2010, he won Fleche Wallone, so he can cope with short, steep climbs.

What about Diego Ulissi? He is looking very good, and won Giro dell’Emilia and Coppa Sabatini in 2013. Both races finish with short, steep climbs and he is in good shape but to beat Gerrans and Evans he needs to be at 100% and I don’t think he is.

It promises to be a wonderful occasion and well worth watching.

Has to be Gerrans for me and he’ll claim the Ochre jersey too.