Lizzie Williams (Hagens Berman – Supermint) rolled away from a small breakaway on the third lap and never looked back to take her third win of the Tour of America’s Dairyland at Port Washington. 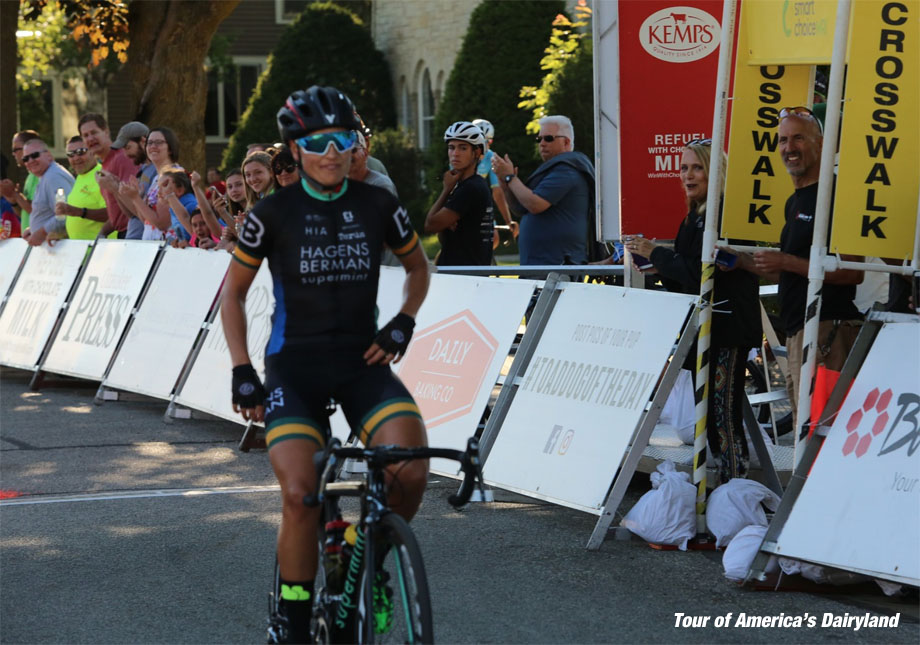 Williams, the former Pro Tour rider from Australia, increased her gap nearly every lap, allowing her to post up for her victory salute a long way from the finish. Williams also won the pro women’s race yesterday at Schlitz Park on a course with a steeper but shorter hill.

The field split up early in the race due to the pressure put on up the steep Wisconsin Street hill. A group of nine separated themselves with strong attacks from Samantha Schneider (ISCorp p/b Progress), then Williams.

Both the chase group and the field seemed mostly content to stay together. One break of eight tried to get away from the field but they were absorbed back in after a lap.

Garcia used her fresh legs to outsprint the chase group to take second while Skylar Schneider took third with Peta Mullens just behind. The field stayed together after the initial attrition and finished nearly a minute behind Williams.

The race heads to Shorewood Thursday with what will certainly become a playground for the foreign riders with many of the American pro women heading to Knoxville, TN for the U.S. Pro Championships. That means the overall and team competition will change with the Schneider sisters (ISCorp p/b Progress), who are in the top five overall, both leaving for Tennessee. 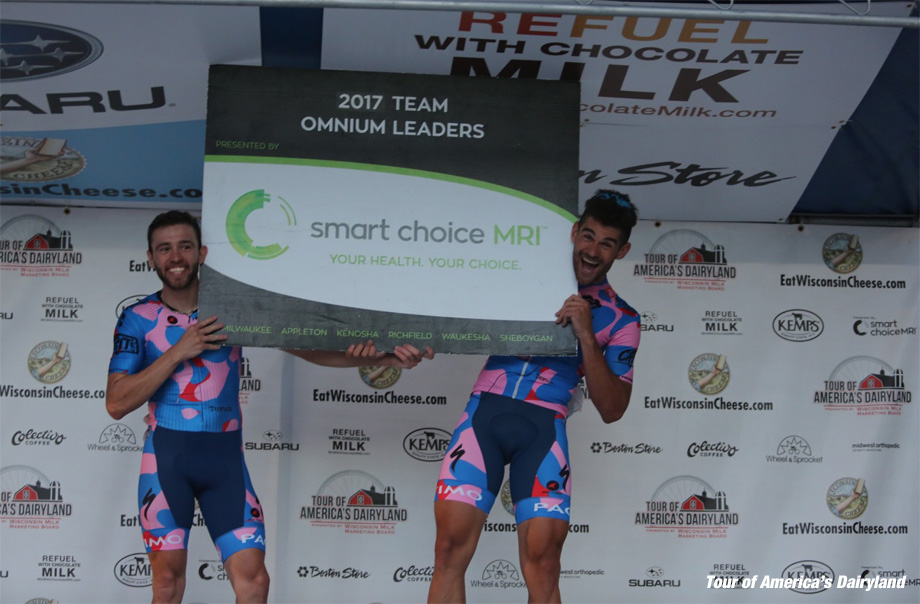 Aussie teammates Aiden Toovey and Dylan Sunderland from the Subaru NSW Institute of Sport finished together out of a five-man break to win the men’s Port Washington stage of the Tour of America’s Dairyland.

After a flurry of attacks, five riders launched off the front with three riders from the NSW Institute of Sport Liam Magennis, Toovey, and Sunderland. While Sunderland and Magennis worked at the front of the break, Eamon Lucas (Crit Life) and Orlando Garibay (Cylance) sat on and waited for the inevitable attacks, likely from Toovey, who sat on the back. Several riders from the field, including overall race leader Florenz Knauer (Stradalli Cycle/Safetti), tried to bridge across but without success.

Eventually, with the break keeping a 25 to 30 second gap over the field, all the riders were content to ride out the race until the finish with the occasional attack off the front for primes. The break maintained the same lap split time throughout the race until it broke up. The pace, particularly up the Wisconsin Street hill, was relentless, and the field was decimated each lap. The field eventually ended up with about 20 riders.

Finally, with a prime on the line with seven laps to go, Toovey attacked and went solo off the front. Soon Sunderland joined up with his teammate and team time-trialed to catch the back of the field.

On the last lap, they dropped off the peloton and rode in together arms in the air. Garibay out sprinted Magennis for third and Lucas hung on for fifth.

Florenz Knauer (Stradalli) burst out of the field tonight to take sixth on the stage ahead of Colin Strickland (Intelligentsia-Allied) to keep his yellow jersey for the overall series.

James Hilyer from Durango, CO who came out to ToAD for some fun, took over the Oarsman Capital Green Jersey for best Cat. 2 rider yesterday and hung on again today. Hilyer, who is not riding for a team but is looking, finished just off the back of the small main field.

• See full results and all the pics here.