It’s Rest Day #1 at Le Tour, but Ed & Martin are hell bent for leather enroute to the annual Quick-Step mussels & frites cook out deep in the French countryside. Not everyone scores an invite to this exclusive affair, but we’re happy to take you along for the ride, and a chat with some of the team bosses… 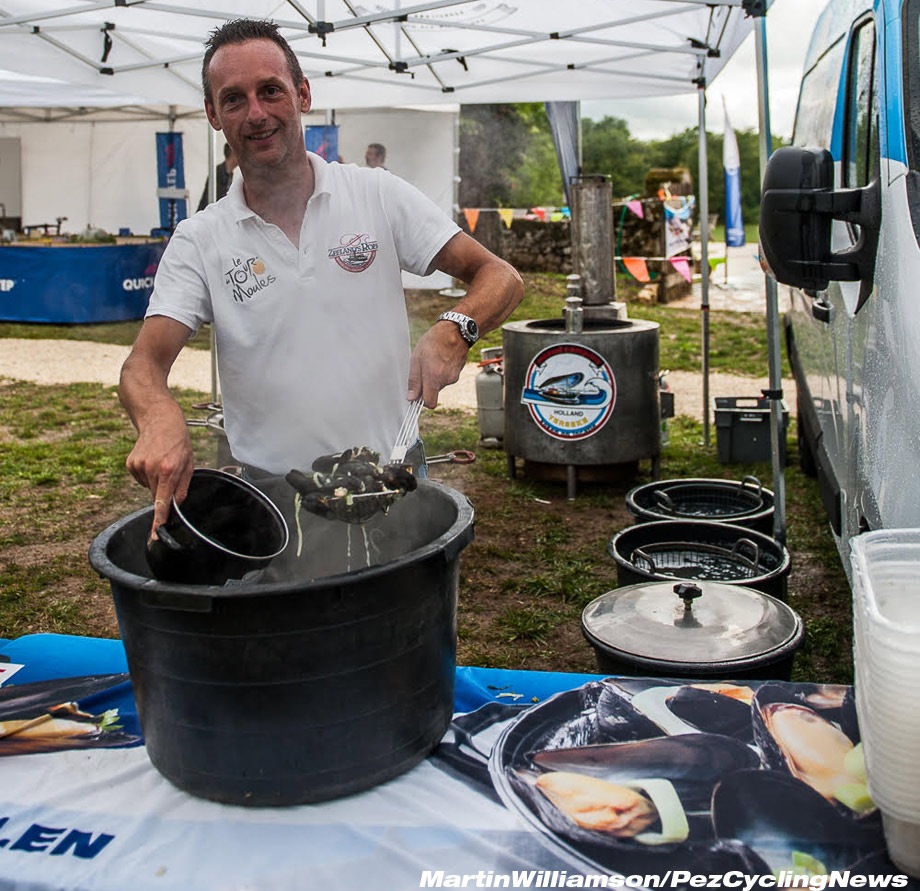 But first the ‘state of the polls.’

Aru, Fabio (Astana & Italy) lies second with a stage win under his belt. He’s just 18 seconds off the lead and looking frisky, we were right about his light early season due to injury doing him a power of good. Let’s hope he has the gas for that last week – but we do worry about that Marseille chrono . . .

Bardet, Romain (AG2R-La Mondiale & France) third at 51 seconds with a team who have signed a ‘death or glory’ pact he’s Froome’s most dangerous rival. The difference between Bardet and Aru is that the Frenchman would risk it all to go for the win; Fabio would be happy with a podium.

Chaves, Esteban (Orica-Scott & Colombia) is 32 minutes off the pace and not fully recovered from his knee injury – stage win in the last week? Maybe.

Contador, Alberto (Trek-Segafredo & Spain) is 12th @ 5:15; he was weak on les Belle Filles and took a hiding on le Chat – one season too many ? Perhaps.

Fuglsang, Jakob (Astana & Denmark) is fifth @ 1:37; we thought his Dauphine win may have been a flash in the pan but the man rode strongly on Stage Nine. We’re watching with interest. 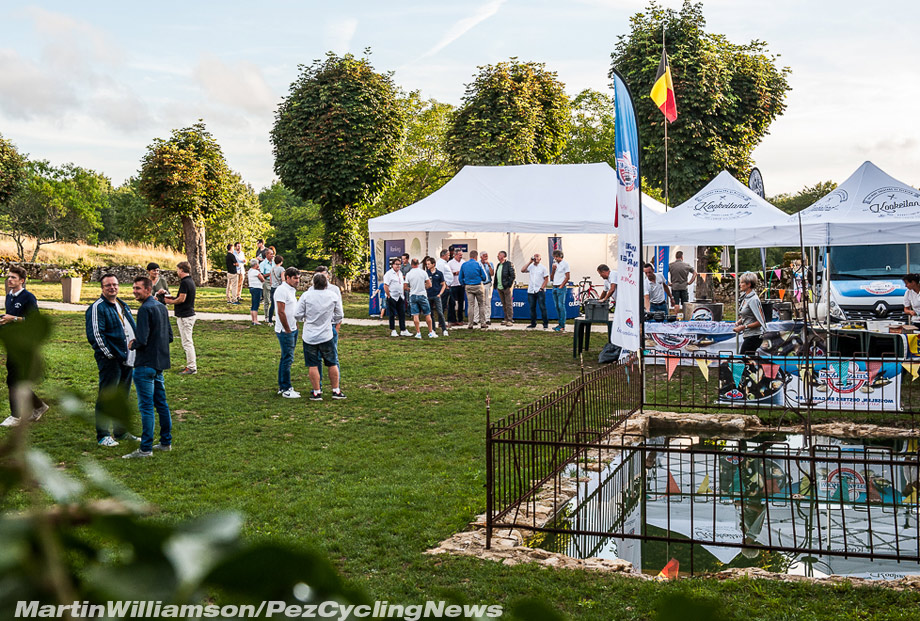 Martin, Dan (Quick-Step & Ireland) is sixth @ 1:44 and is riding strongly with Lady Luck on his side – that crash off mont du Chat could have ended his race. A podium is possible.

Majka, Rafa (Bora-Hansgrohe & Poland) is way off the pace @ 37 minutes; he’ll have to take something home and Barguil has put down a big deposit on those polka dots.
CANCEL THAT: we’ve just received word that he’s out – too many aches and pains from yesterday’s chute.

Porte, Richie (BMC & Australia) is out after his horror crash yesterday – his Grand Tour jinx continues.

Quintana, Nairo (Movistar & Colombia) eighth at 2:13 the Giro/Tour double ? Nope. It looks very much like second spot on the Giro podium is as good as it’s going to get for the man who a year or two ago was a Tour winner in waiting.

Valverde, Alejandro (Movistar) is out after pushing it just too far in the Stage One chrono. Movistar isn’t Movistar without him.

Yates, Simon (Orica-Scott & GB) is seventh @ 2:02 and he could just make the podium especially now that there’s no Chaves GC challenge. 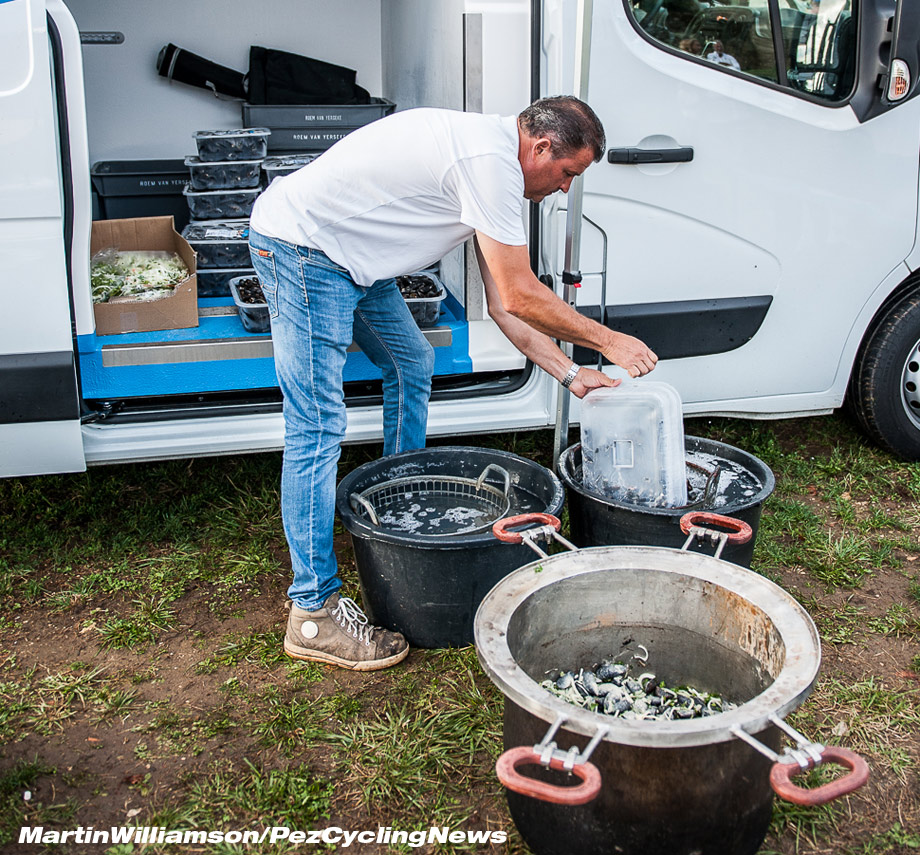 Now, Let’s Talk MUSSELS !
Off the plane, there’s Martin with the PEZmobile, get to the digs, shower, let’s go! It’d be hard to crash this one – waaay out in the sticks, a lovely old chateau. 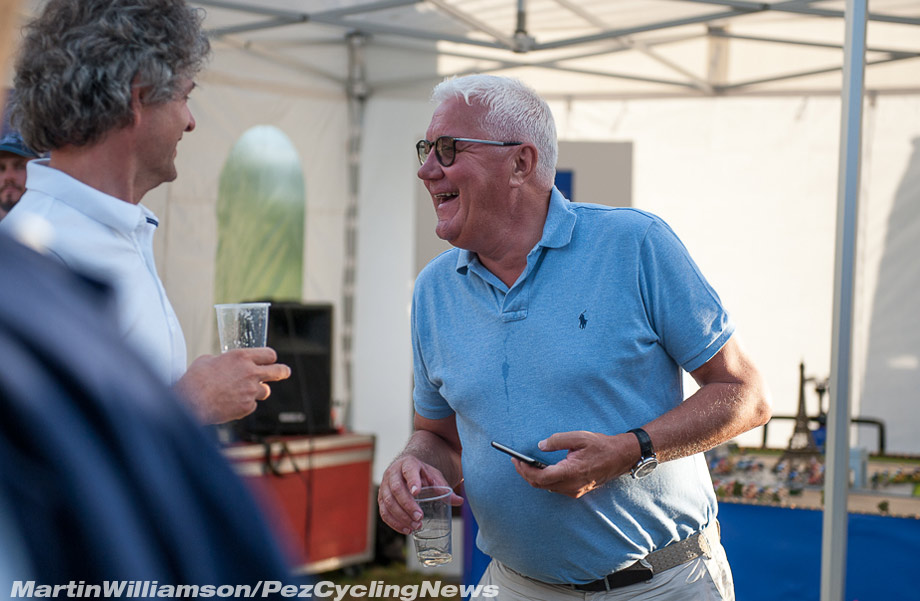 It used to be Vacansoleil’s gig but when the team folded Patrick Lefevre and Quick-Step knew a good thing when they saw it and for the last few years it’s been their ‘mussel party’ on the first rest day. 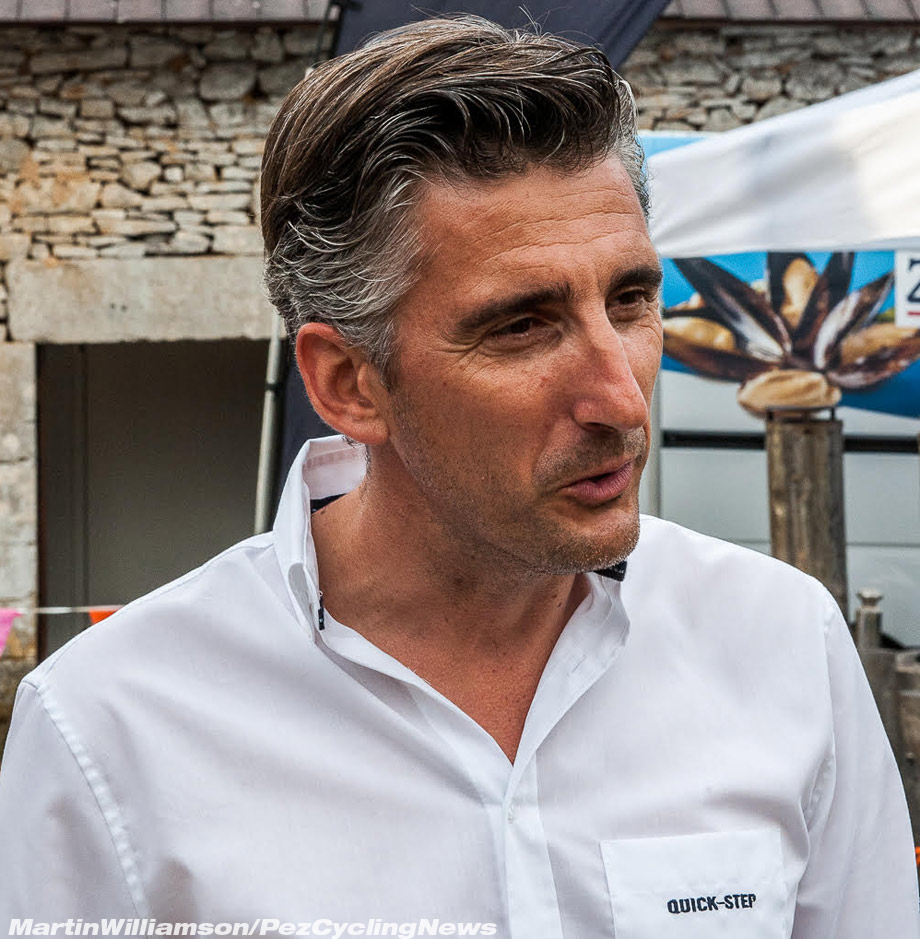 We received two invites, one from QuickStep’s cool Italian press guy, Alessandro Tegner and one from, ‘The Mussel Man’ Berteld Van de Velde who drives 200 kilograms of the precious bi-valves down from The Netherlands for the gig.

Once we’d consumed our own body weight in moluscs (but just one pils) we hooked up with Alessandro. He’s been with the team since 2003; he studied political science at university before joining the team – not a bad preparation for the Machiavellian world of pro cycling. When he started in the job he had to send out his press releases by tele-printer to 45 recipients. Now the team has 1,000,000 followers across the social media spectrum. 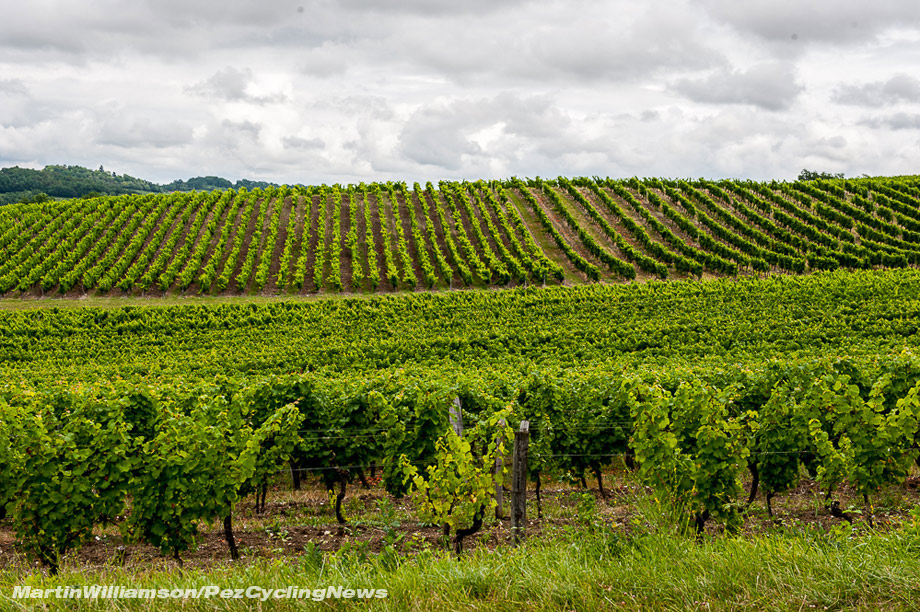 Whilst Alessandro isn’t involved in the stage by stage management of the team, his finger is obviously well on the pulse of how things are playing out. We asked him about why the sprint stages – of which their German star, Marcel Kittel has won three – in this Tour have been played in such chaotic fashion;

‘In the Giro the sprint trains line up with maybe three kilometres to go, here the position battle starts with 30K to go so by the time you get into the finale, the organisation has gone.’

And what of Dan Martin, after his big crash on Stage Nine?

‘On the one hand he was lucky not to have been more badly hurt – but on the other hand, if he hadn’t crashed he was the fastest finisher in that group, he’d probably have won the stage and be second on GC now.’ 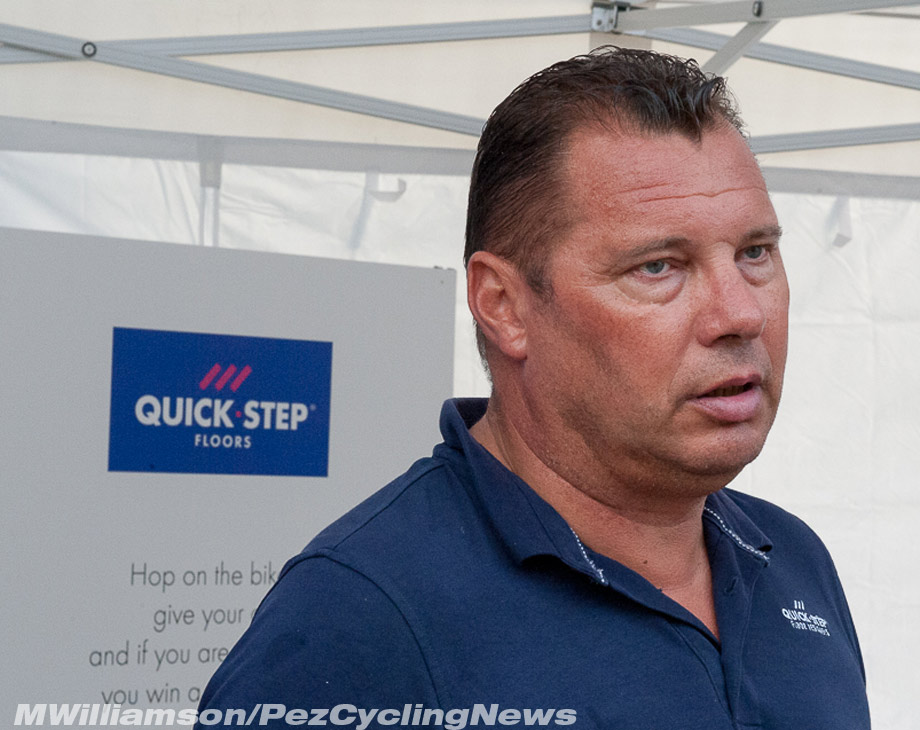 Team DS Wilfried Peeters – a former winner of Gent-Wevelgem – continued on the sprint train theme by explaining that none of the teams present have a really solid train for the finales and that’s why the finishes have been so disorganized.

When we asked if Kittel would have gone for that gap Cav did, between Sagan and the barriers he rolled his eyes and replied; ‘for sure, no!’

On Dan Martin’s crash he explained that nothing was broken and that it was good that there were two ‘sprint stages’ to come which would let him hide and recover a little; he shared Alessandro’s view that but for the crash, Dan Martin would now be in a podium position.

And what of Froome, can he be beaten?

‘It’ll be hard, he’s lost Thomas but you can see how strong Kwiatkowski is – but AG2R are a strong team for the GC and Bardet is going well also. Quintana can’t do it, the Giro is too hard, you can’t come out of that and hope to be competitive here.’

Martin asked him if he’d ‘do an FDJ’ and send three men back if Kittel was in trouble and risk elimination he explained;
‘yes, it’s one of the plans.’ 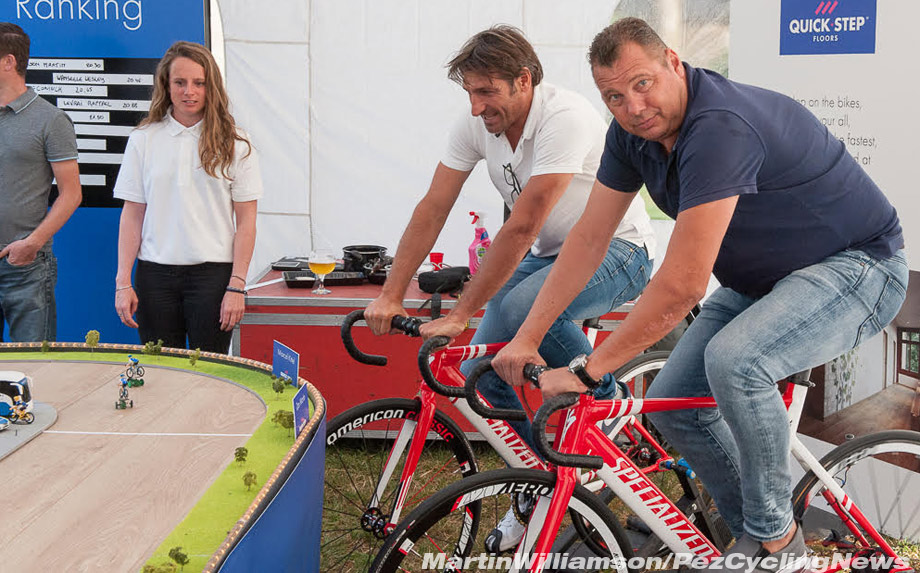 Davide Bramati was our next victim; but not before he’d gone down to Wilfried in a roller race.

The gregarious Italian was originally a rider with the team – and a former Giro and Vuelta stage winner – but moved seamlessly into management after the 2006 Giro guiding Tom Boonen and Nick Nuyens to stage wins in the Tour de Suisse during his first stint in the team car. 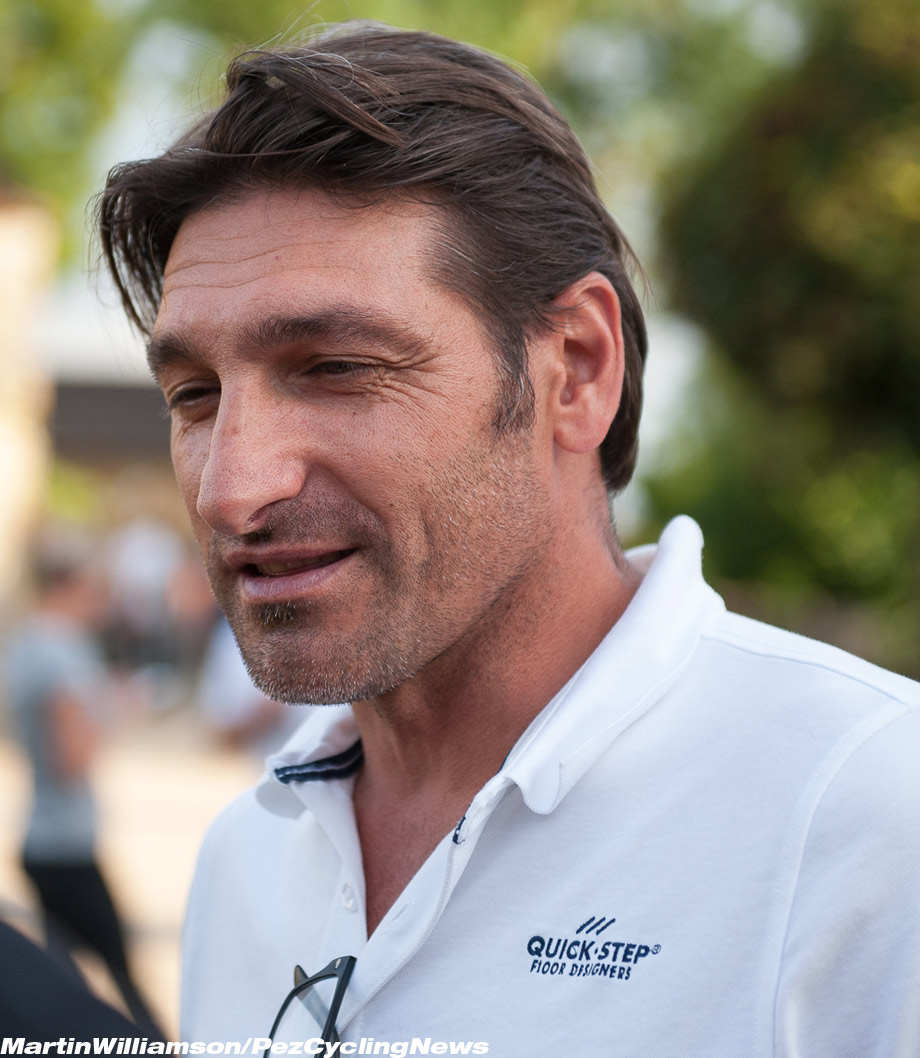 This is his sixth Tour as DS and he’s done 10 Giros, we started off by asking him about Kittel’s fallow year before he joined QuickStep;

‘Sometimes an athlete needs a change, of team, of surroundings to restore his motivation – and if he’s sick and not getting the results he’s used to then that’s very hard to accept. He’s won three stages in this first week of the Tour and that’s not easy to do.’

He continued on the Dan Martin theme;
‘Dan’s very fast from a small group like that and he would have won that sprint had he not come down. But we have opportunities again tomorrow and on Stage 11 with Marcel; and we also have stages coming which suit Gilbert and Stybar – there’s still a long way to go in this Tour.

And can Froome be beaten?
‘The others have to gain time on him now because there’s that 22.5 kilometre time trial in Marseille which is good for Froome but bad for Bardet and Aru.
But his team is so strong; Kwiatkowski, Nieve, Landa – all so strong.’

We would have loved to have stayed longer but we had a deadline to meet and an hour’s drive to the digs.

Sprinters’ stage tomorrow but we’ll do our best to make it interesting
A demain.