There’s no such thing as a dull moment when you’re Roadside at Le Tour.  In spite of the riders lolly-gagging along, there’s much to see enroute – as Ed & Martin found at the Notre Dame des Cycliste, the cyclists’ chapel.

Estang, we’re not sure if it’s a shop or a bar and there is a touch of manure aroma in the air; BUT they have a huge projector screen showing 36 K to go and a fridge full of cold beer – Nirvana. 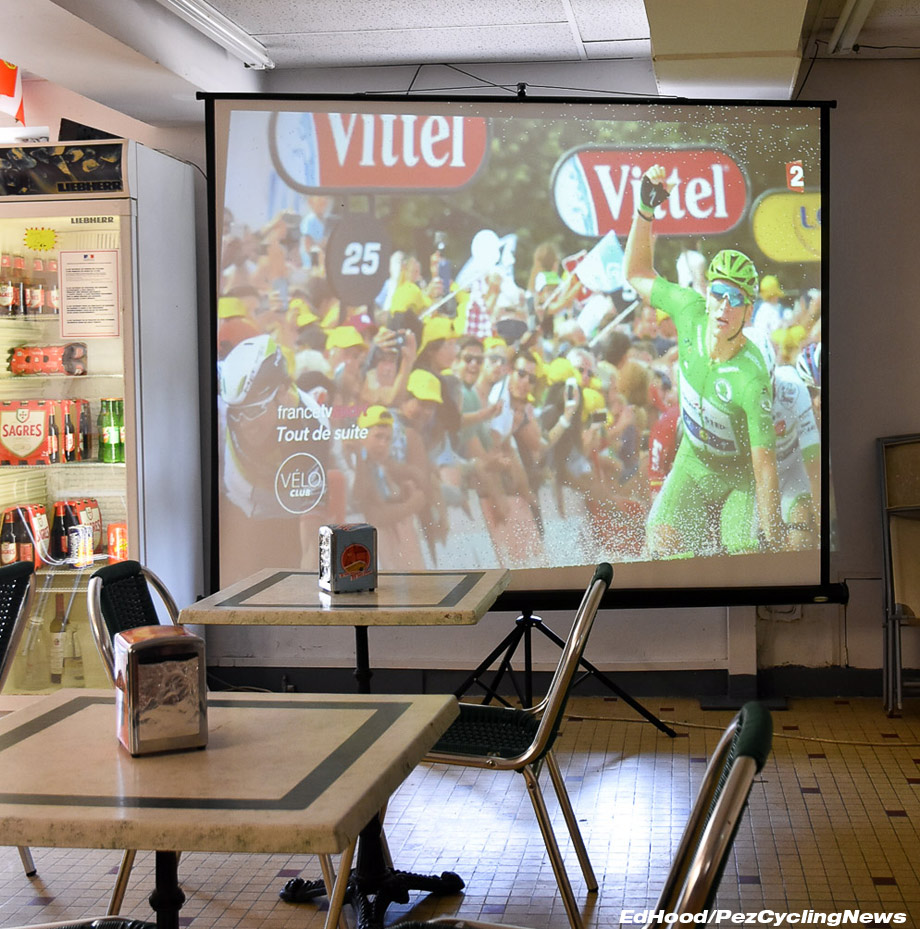 The same three are still up the road as passed us a ways back; the inevitable Wanty, Belgium’s Frederik Backaert on this occasion; UAE’s Italian Marco Marcato and twice winner of the Polish TT champs, Maciej Bodnar.

But Bodnar is missing the solitude and goes solo – a very impressive sight. 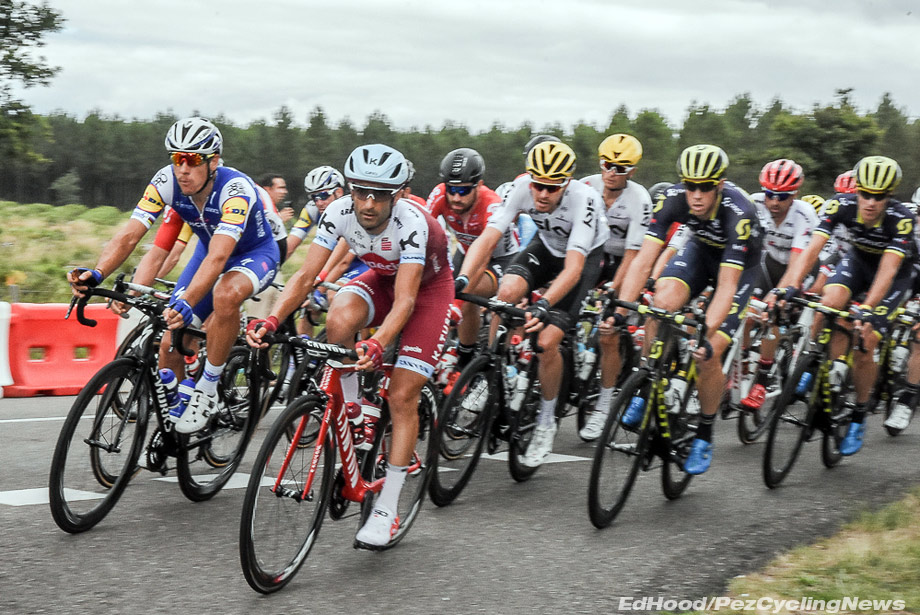 It takes a rampaging peloton until 250 metres to go to tame ‘The Bison’ – as he’s known – and again it’s Big Marcel Kittel (QuickStep & Germany) – who makes it five.
How to stop the man in green beating you? Take up darts maybe? But cliche or not, he owes a big debt to his team – Vermote, Gilbert and Sabatini in particular.

And Edvald, there’s no point in taking it out on your ‘bars, Big Marcel beat you fair and square.

A big thanks from PEZ to ‘Bison’ Bodnar for first class entertainment as we enjoyed our Sagres (Portugal’s best brew). A satisfactory end to what we feared may be another ‘paint drier’ of a day. 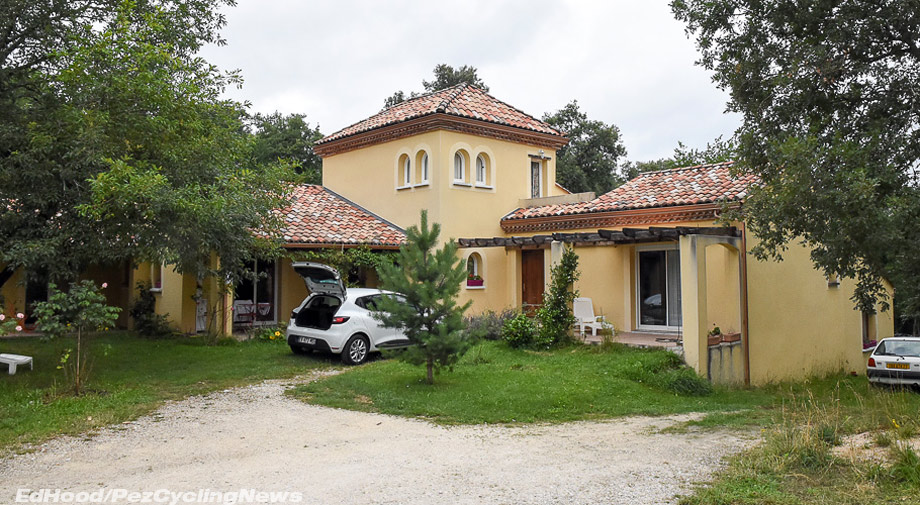 It’s kinda sad to be leaving our base camp. The pension is owned by a Parisian couple who decided they’d had enough of the Rat Race and headed into the Dordogne to find tranquillity. This is unusual; many Parisians think that civilization ends at the Peripherique.

But Le Tour rolls on and so must PEZ. The chances are it’ll be another sprint stage, today. To paraphrase Richard Pestes; “what can you say about a sprint stage?
A bunch of guys turn up, a couple of guys break away but get caught near the end where some fast/aggressive/crazy guy wins – then everyone goes back to their hotel.’

Much as the podcasters may attempt to pad it out, that’s about the sum and substance of it.

We worked the stage start yesterday so today we’re going to skip the bus park, head south out of the Dordogne region into Lot-et-Garonne then into Les Landes, that region of mystery which stretches west all the way to the Bay of Biscay. 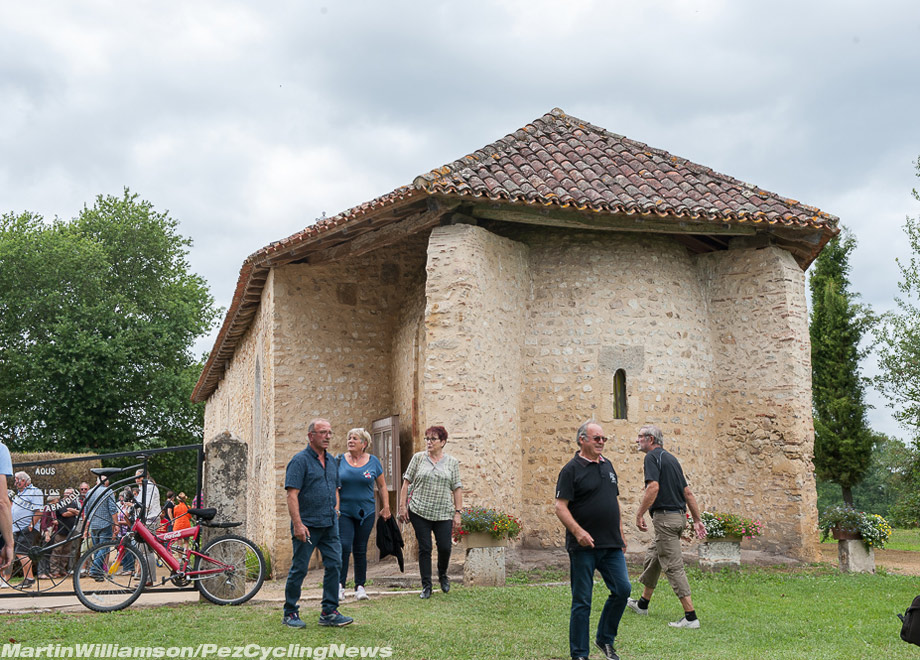 Labastide-d’Armagnac is where today’s feed station is located but it’s also the site of Notre Dame des Cycliste, the cyclists’ chapel. The chapel dates way back to the Knights Templar and the 12th century. It’s dedication to cyclists was inspired by the Madonna del Ghisallo chapel on the percorso of the Tour of Lombardy in Italy.

But first we have to get there. The long trip south is eased by picking up today’s L’Equipe and tuning to Radio Nostalgi – c’est bon! ‘Start me up,’ The Stones, that’ll do fine.

Kittel’s arms are spread wide on the cover of L’Equipe; ‘Sans Pitie’ – ‘No Mercy’ as he takes win number four. A good day for Froome and Kittel’s stats; ‘the Dog’ now equals Anquetil for days in yellow with 50, fourth equal after Merckx on 96; Hinault on 75 and Indurain on 60. Whilst Kittel now tops Zabel in terms of German stage wins on 13 – soon to be 14! 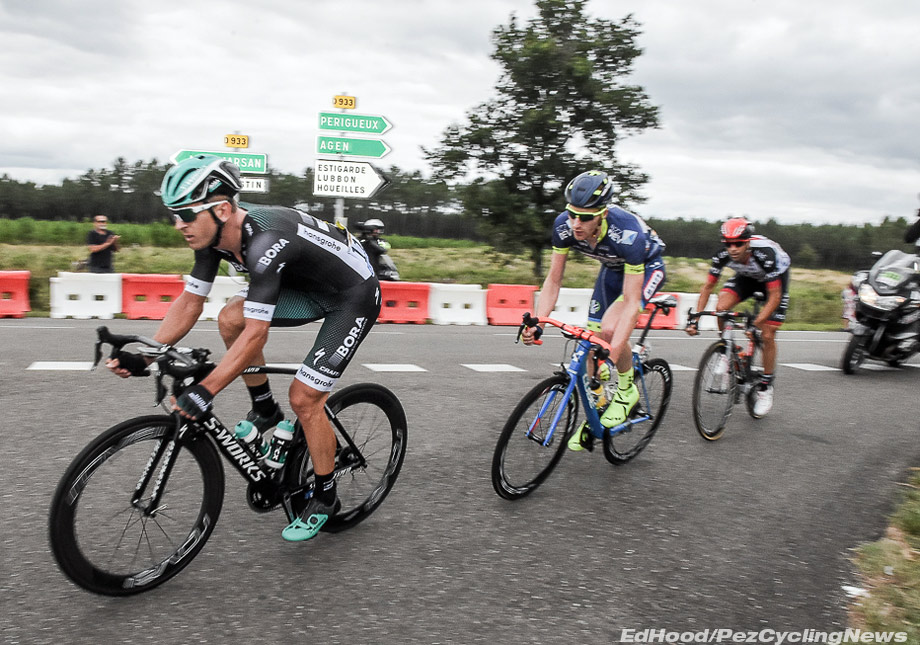 And he’s now 102 points clear of Matthews with 275 to 173 – even more after today. Although the etape may have been a ‘paint drier’ it was still run off at 44.3 kph. ‘La Meme Chanson’ says Kittel’s double page spread inside; ‘The Same Song’ – for sure.

Contract scuttle butt is that for 2018 Kittel goes to Katusha and Kristoff goes to Astana – both bad moves if you ask me. And file under; ‘only in L’Equipe’ – ‘The story of Tour race numbers’

#1: 18 riders wearing this number have won the race in the 70 post war years.

#31: is the number which has won the most stages from a breakaway – nine.

#51: Merckx, Ocana, Thevenet and Hinault all won whilst wearing this dossard.

#63 + 126: are the numbers which have won the most stages in a lone breakaway, seven each.

#92: the unluckiest number – a rider wearing this number has abandoned 34 times.

Edvald Boasson Hagen carries it this year. There are loads more but I can sense you slipping away. We catch the race a few K north of Labastide d’Armagnac, ‘watching paint dry’ and ‘dullfest’ say two of the emails which I receive.

And it’s the same as yesterday only there are three sleep walkers off the front instead of two; former Paris-Tours winner, Marco Marcato (UAE & Italy), Maciej Bodnar – aka ‘The Bison’ – (Bora & Poland) and . . . a Wanty, this time it’s Belgium’s Fredrik Backaert.

It’s a good job Wanty are here, they’re in the break every day. 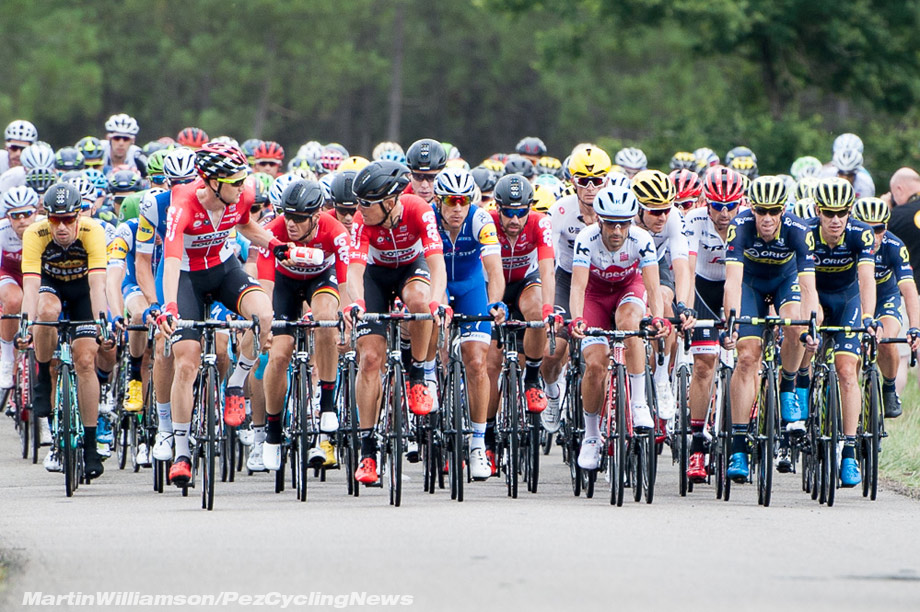 They have almost exactly two minutes on a Sky propelled bunch but neither break nor bunch is anywhere near full gas. 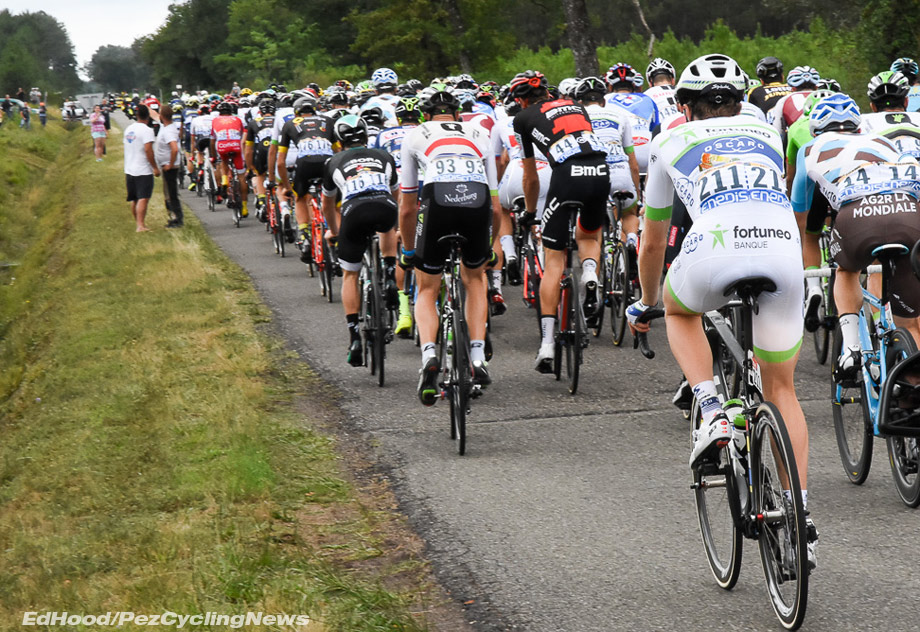 Stone last in the peloton is Fortuneo fast man, Dan McLay; resting those big fast twitch muscles as much as possible for the inevitable mad charge for the line – Steve Cummings is back there too, as is his wont.

Direct Energy’s Thomas Boudat is just off the back, he must have punctured.

The Notre-Dame des Cyclistes is just how I remember it, out in maize fields, ancient, beautiful but much busier, this time round. 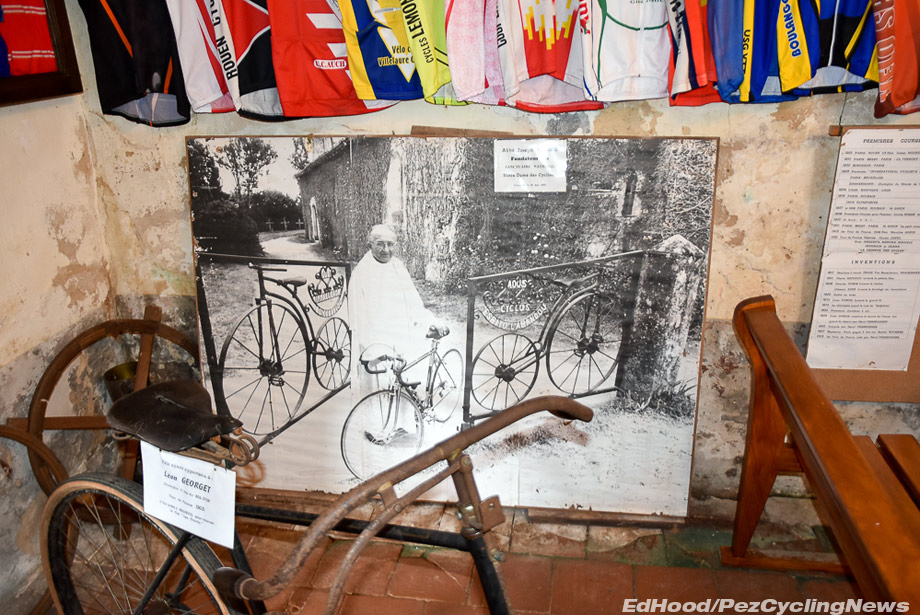 The local priest, Joseph Massie took his inspiration from the Madonna del Ghisallo chapel and since 1959 the collection of jerseys and bicycles has been growing. 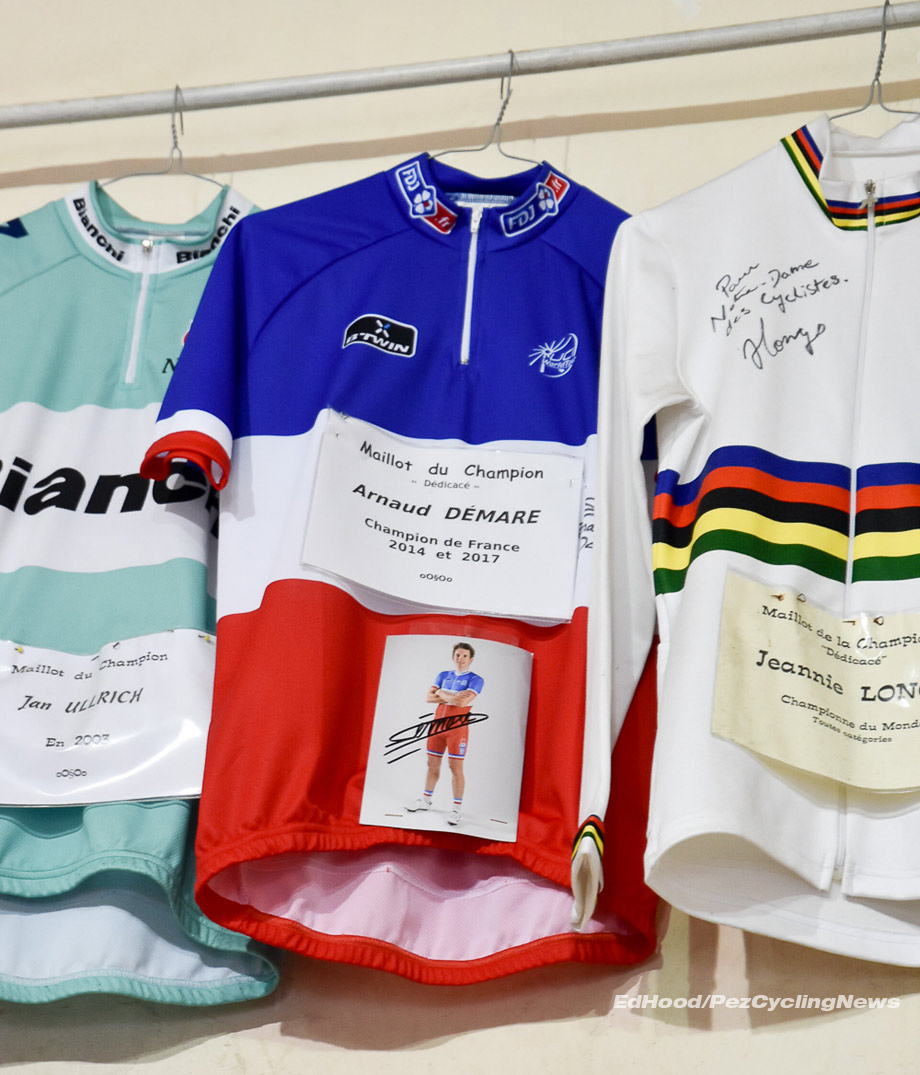 Father Massie died in 1999 but the collection is maintained right up to date with Arnaud Demare’s 2017 jersey in a prominent position.  The walls are covered with club jerseys whilst the more precious maillots from the likes of Hinault and Merckx are safely framed. 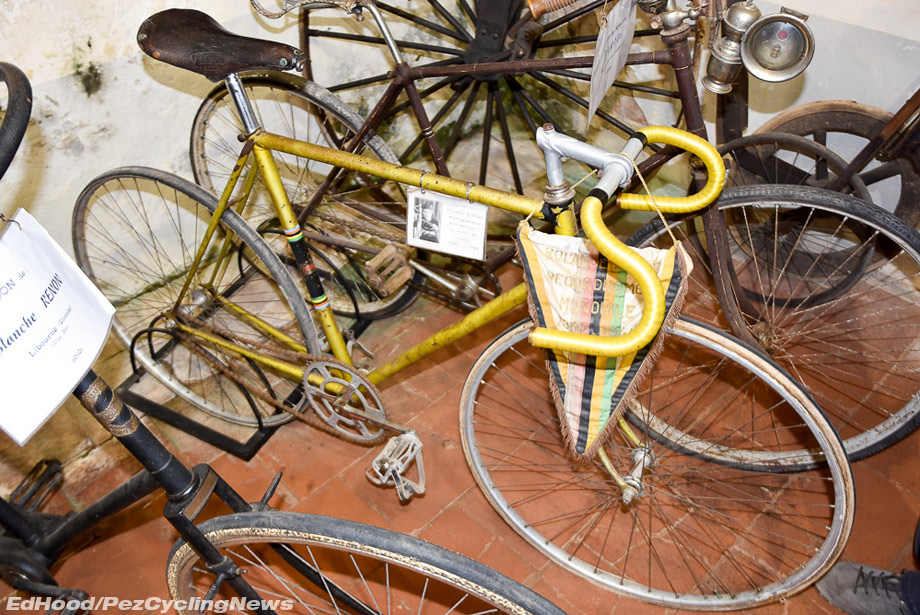 As well as jerseys and images there are bikes too, with possibly the most interesting being that of local lady Rolande D’Anne who was ladies world hour record holder back in 1947 and 1948. 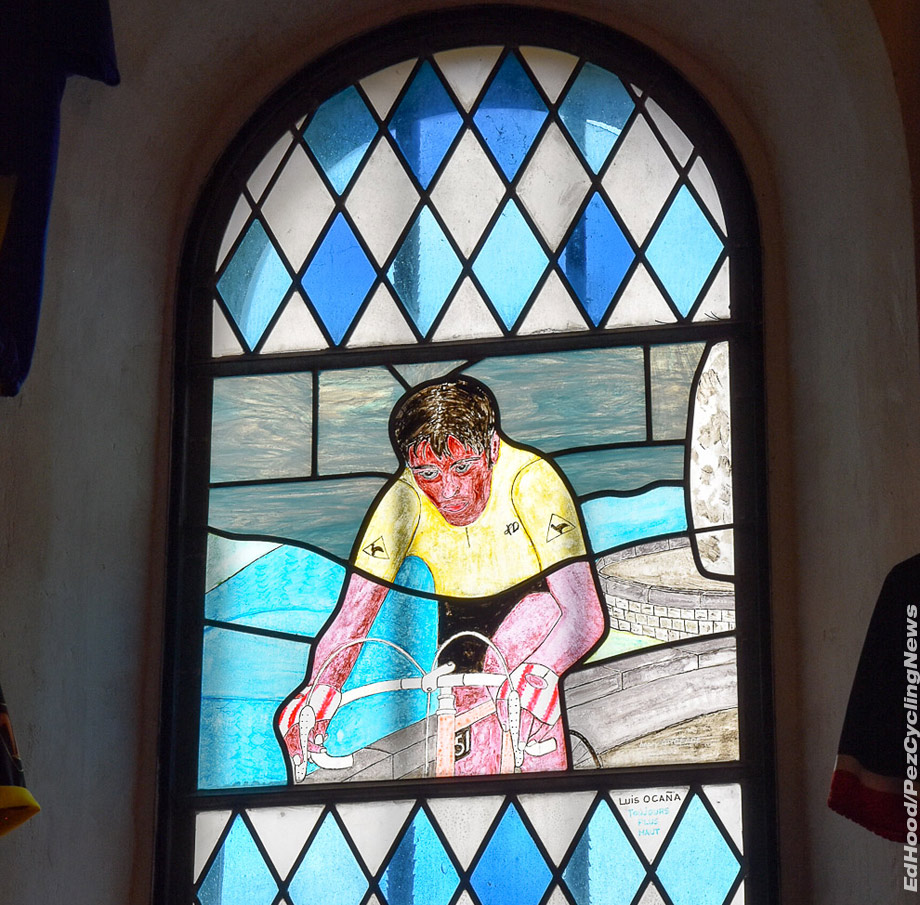 Local man, the late, great Luis Ocana’s image is on display in several mediums; in paint and in one of the stained glass windows. 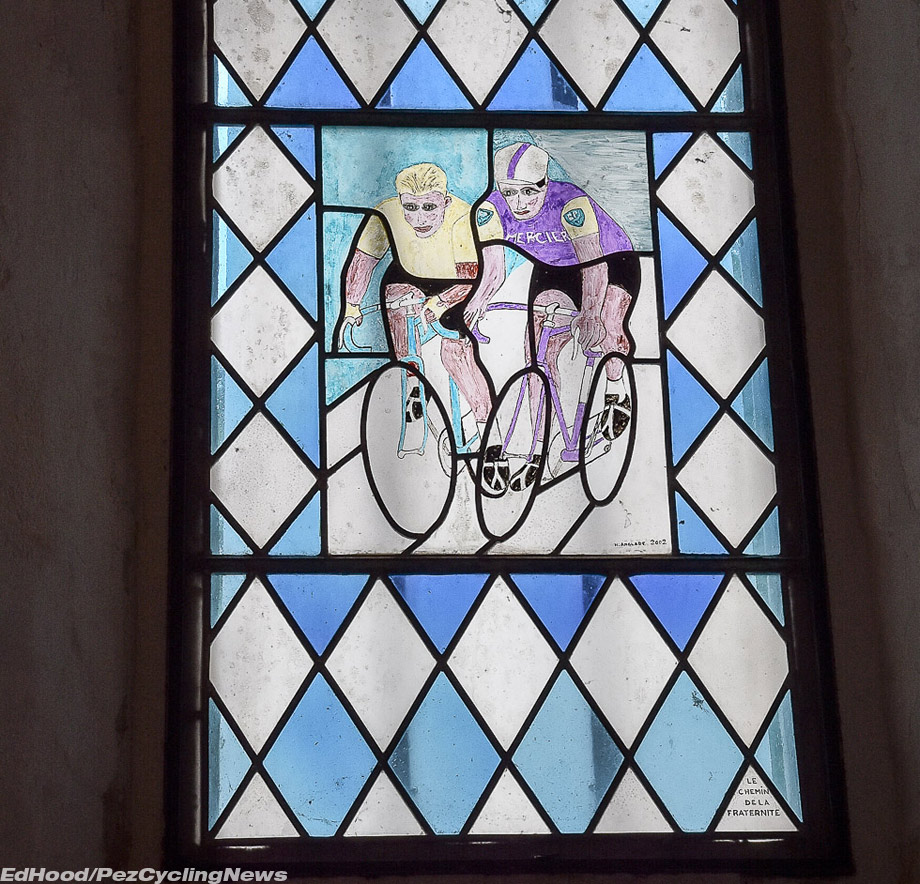 On the subject of stained glass, two of the windows here were crafted by 1966 Tour de France winner, Lucien Aimar – one showing Bartali and Coppi sharing a bottle on a col, the other has Anquetil and Poulidor duelling on the Puy de Dome. 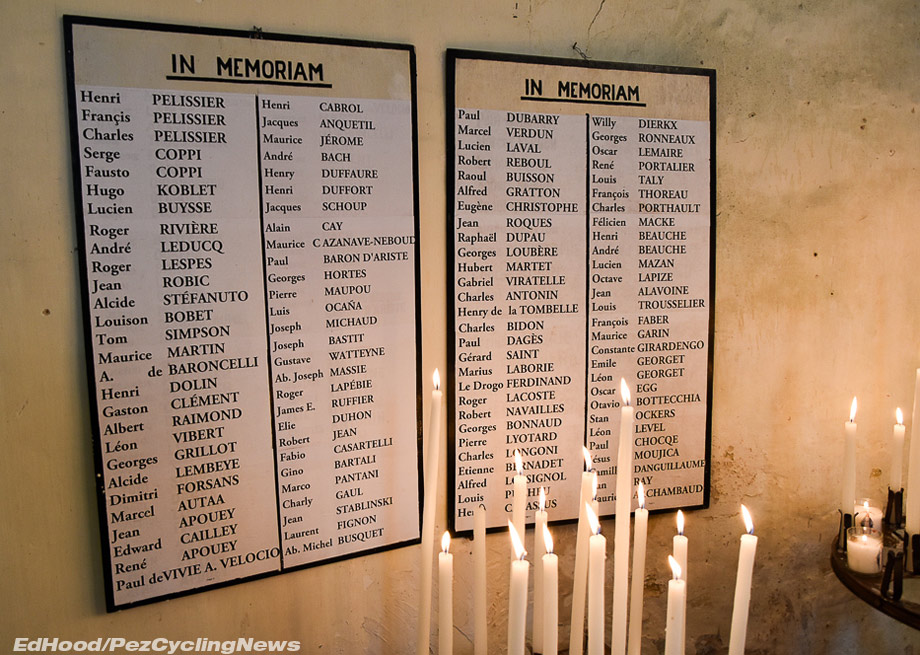 But despite the crowds and all the trade names on display on the jerseys, it’s still a holy place and it’s possible to find a quiet corner to remember ‘good friends lost along the way.’

And that seems like a good place to end our musings on Stage 11; we’re into the Pyrenees tomorrow – wish us luck.
Bon soir.