Le Tour’17 Roadside: The PEZ Roadside Crew bid a sad farewell to the Pyrenees – but had a day with the caravan passing and soigneurs reloading their men to look forward to – here’s what you didn’t see on tv… 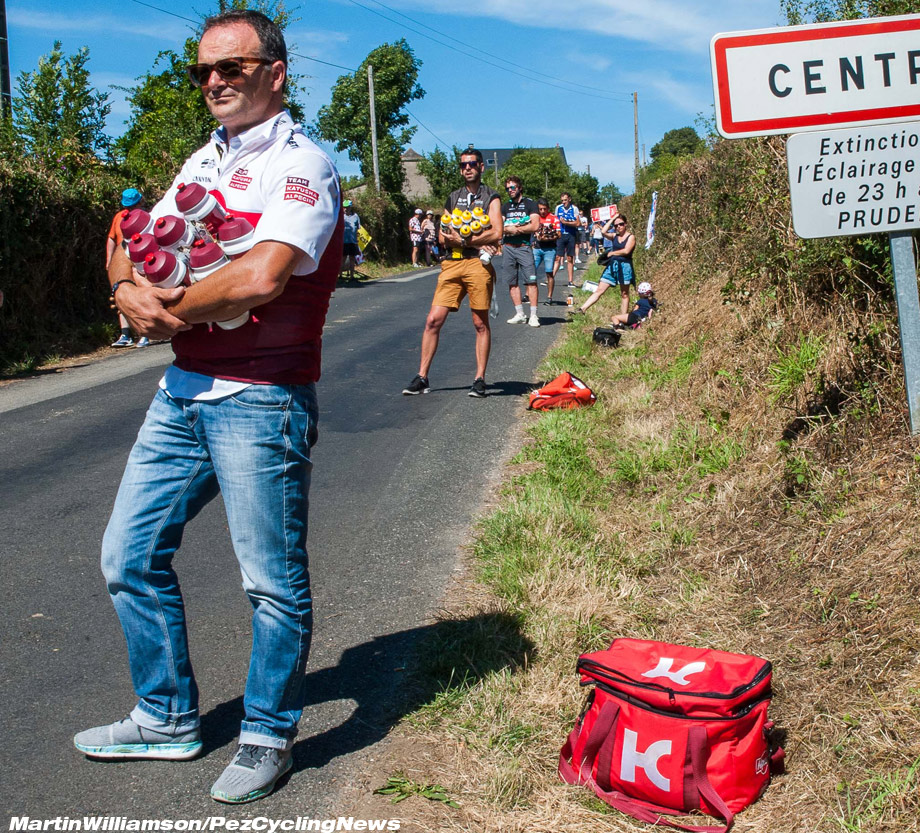 Sky ‘stylist,’ Christopher Froome takes seventh and goes back into the yellow jersey to add another to the Sky and GB total with Italy’s Fabio Aru (Astana) slipping to second at 18 seconds on the GC after misjudging the finale ramp, but third placed Romain Bardet (AG2R-La Mondiale & France) shaves two seconds off, his deficit now sits at 23 seconds. 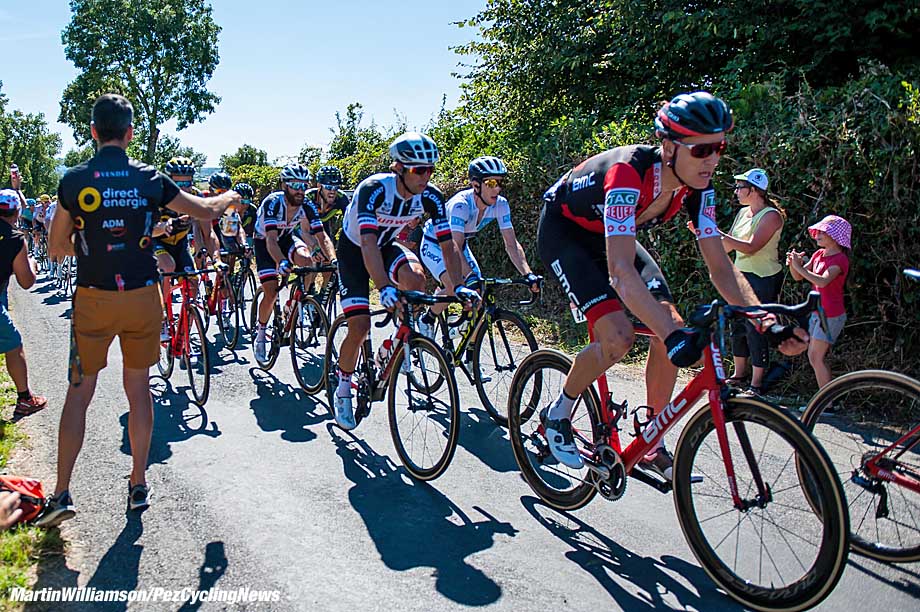 And on the subject of jerseys, Matthews has stolen 50 points back on Kittel, it was 363 for the German this morning to the Aussie’s 235.

On what turned out to be another good day of racing, PEZ decided it was time to see the caravan…

“Pamiers” remember the name for your future travels ‘en France’ – and AVOID at all costs.

Bastille Day, July 14th is also the birthday of my colleague and ace photog on this mission, Martin. We’d hoped to find a nice restaurant to celebrate – no dice. The town was heaving, plenty of places to drink but nowhere to eat or park and the one way system from Hell. A McDonald’s chicken burger with Fanta orange isn’t much of a birthday treat but he did get a framboise cookie . . .

And the wi-fi in our Premiere Classe motel cell was good.

It was sad to watch the Pyrenees fade in the rear view mirror this morning but not Pamiers. 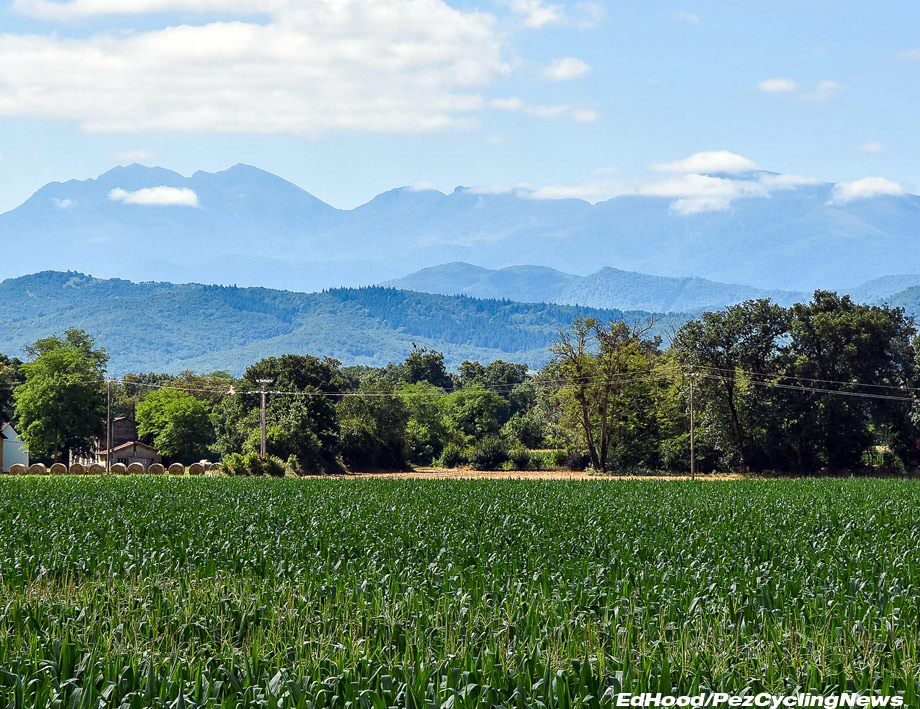 Radio Nostalgi helps smooth the journey north, The Pretenders, Alessi, Donna Summer, Barry White – there are worse ways to spend a Saturday afternoon than cruising across the vast plains of central France, in the sun, with a good sound track.

We’re picking up le parcours late on the stage but early in the day so we can catch the caravan for the first time. We took the Autoroutes and Route Nationals up to Tanus where, with a bit of fancy footwork and a friendly gendarme we slipped on to the parcours.

It’s for the ‘baroudeurs’ today – my favourite translation is, ‘brawlers’ – not major climbs but too tough for sprinters, think GVA, Gilbert or Matthews.

The final categorized climb of just two today, is the Cote de Centres with around 36K to go, 2.3K @ 7.7%, nippy enough on a day of wind, heat and rolling, heavy roads.

Another friendly gendarme moves a barrier for us so we can park in a side road. Sorted! 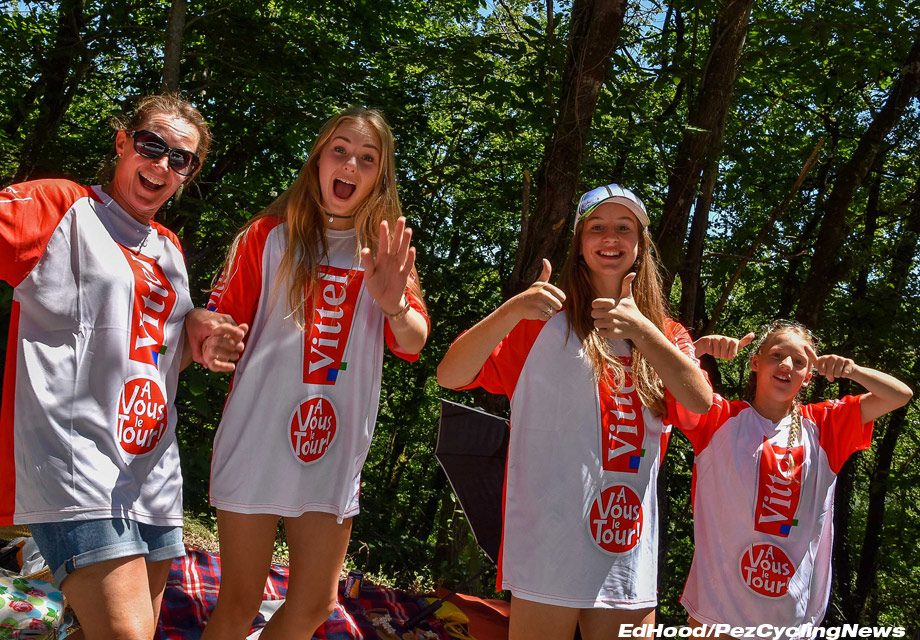 Vittel is the official water of Le Tour and they work the crowd even before the caravan rolls past. They fire out T-shirts by the thousand, free newspapers and small bottles of water. The crowd all want to wear their T-shirts so the TV cameras pick up a sea of Vittel logos.

L’Equipe, is as you would expect, fulsome in its praise for Barguil, the 16th French rider to win on Bastille day with the last being David Moncoutie in 1992.

But maillot jaune Aru’s isolation is underscored by the fact that his best placed team mate, Zeits finished some six minutes behind his boss. Meanwhile, Froome had Landa and Kwiatkowski ahead of him and Nieve just over two minutes back.

And Martin and I are compelled to shoot another huge number of pictures – to add to the thousands we’ve taken over the last dozen years. 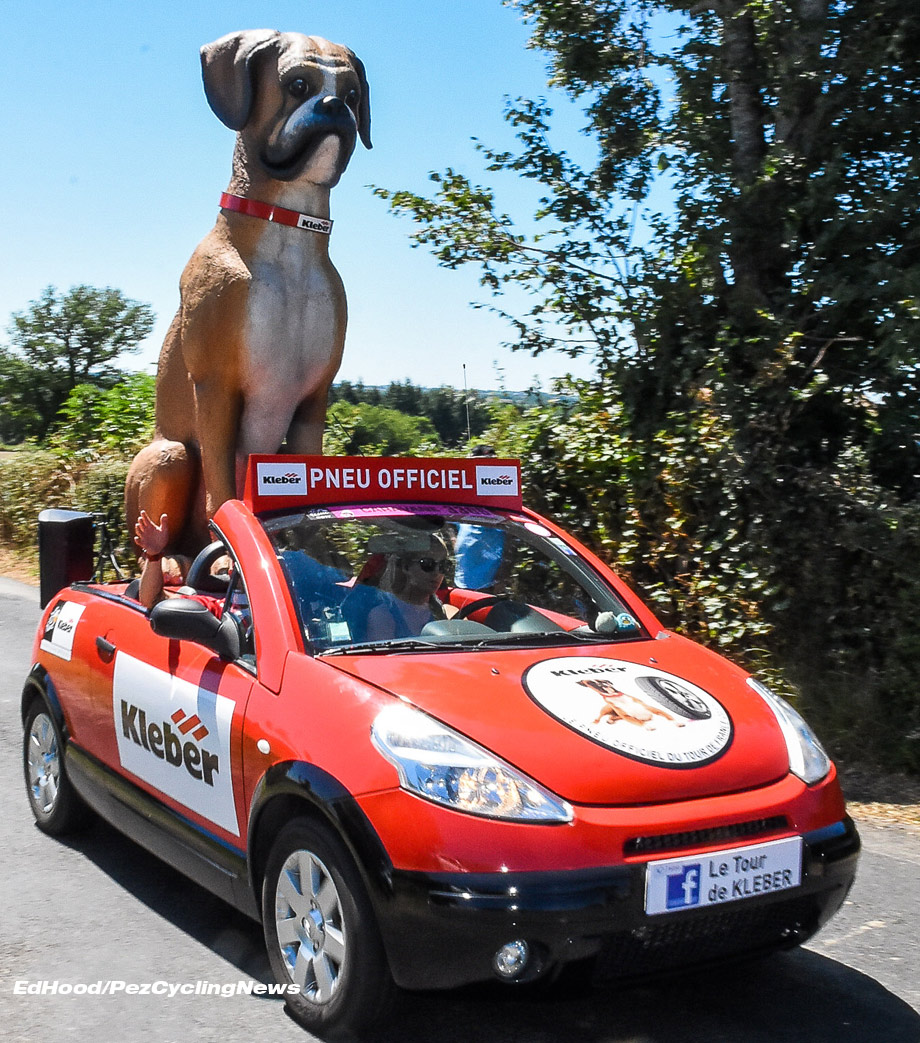 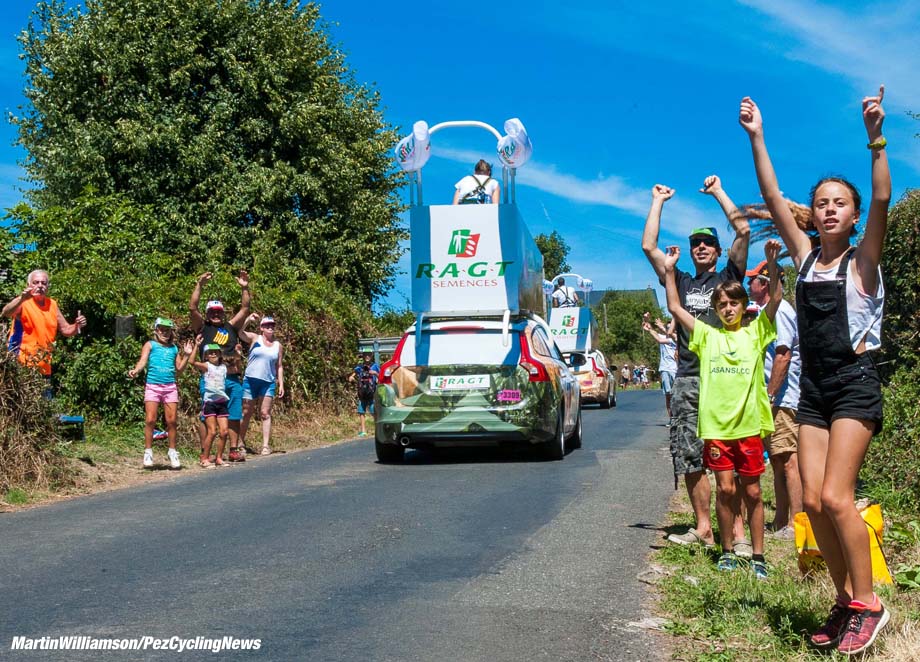 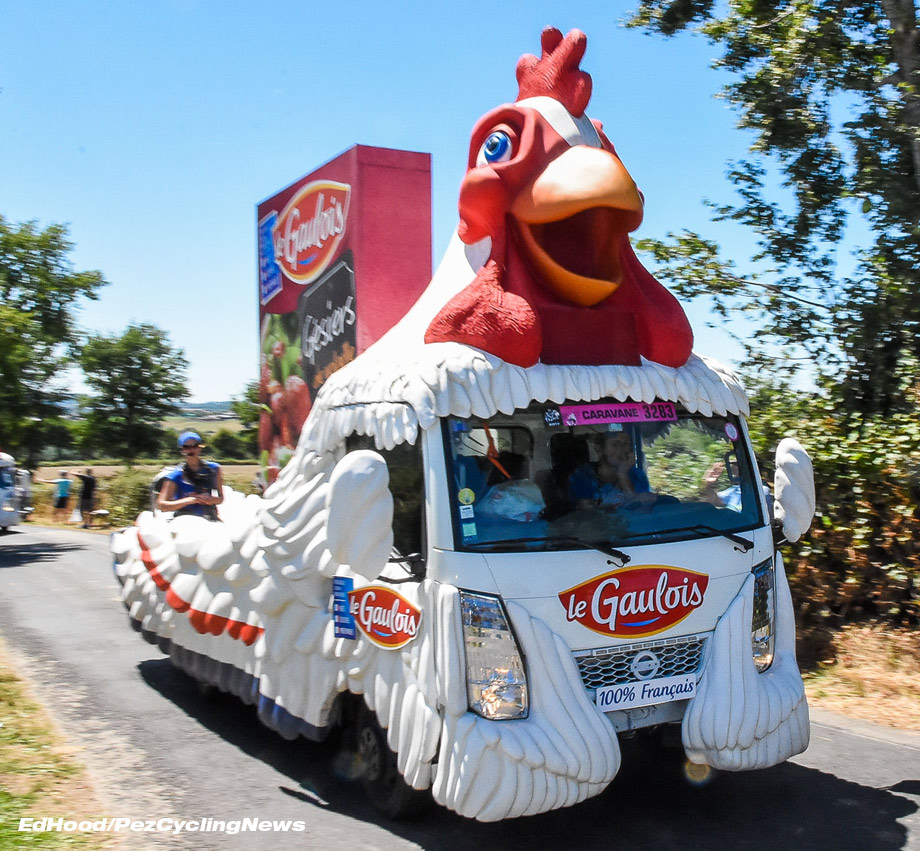 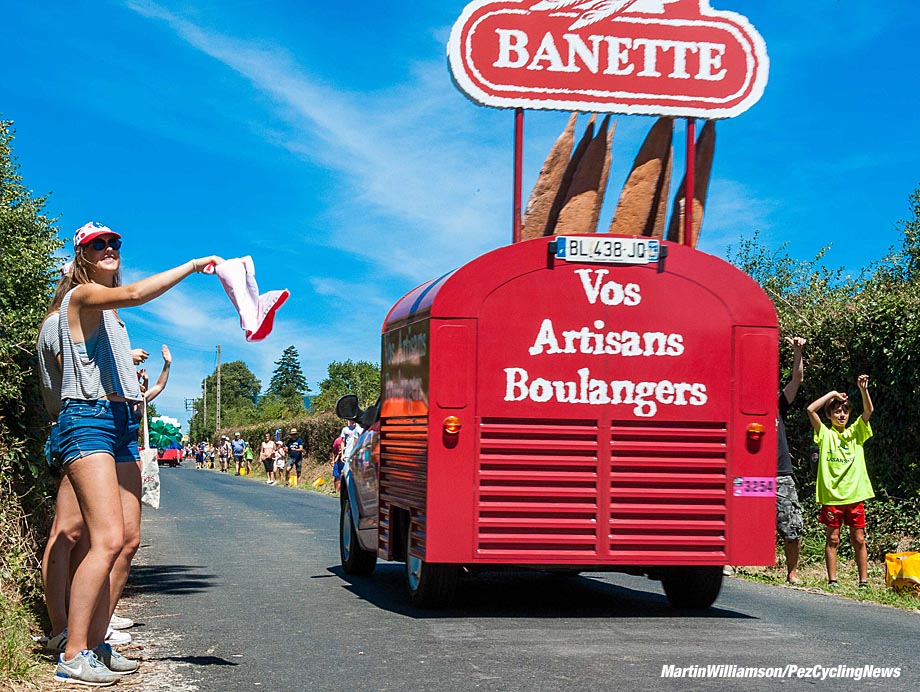 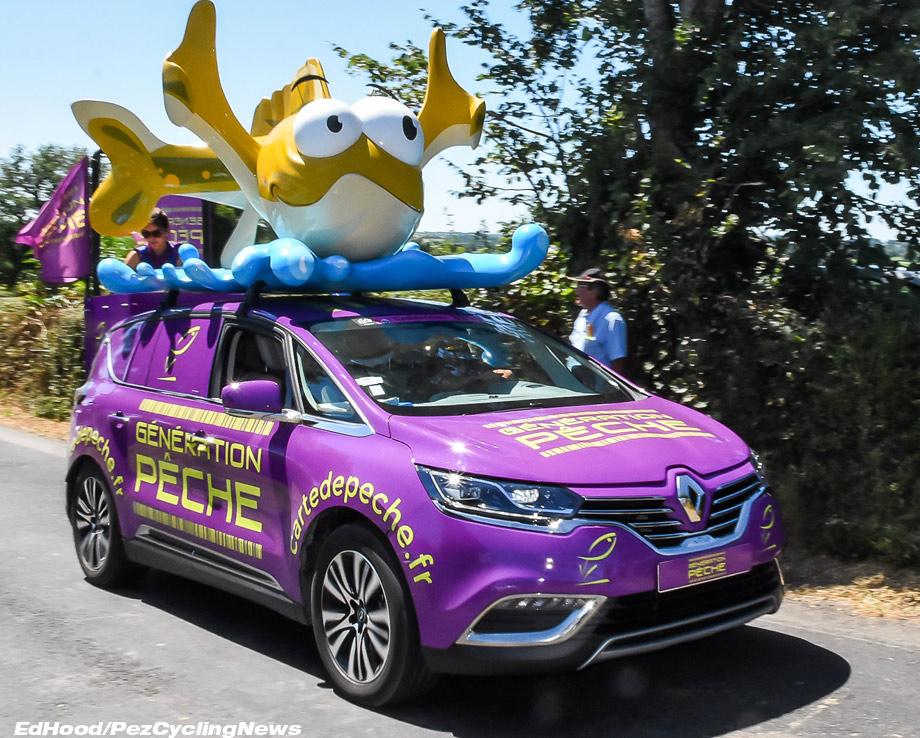 Our picture theme is, ‘The Animal Kingdom,’ and we have dogs, chickens, cows, fish and even the odd alligator.

The caravan gets bigger every year with ever larger quantities of tat hurled out into the French countryside and everyone from tots to old ladies prepared to risk life and limb to get those plastics goodies. 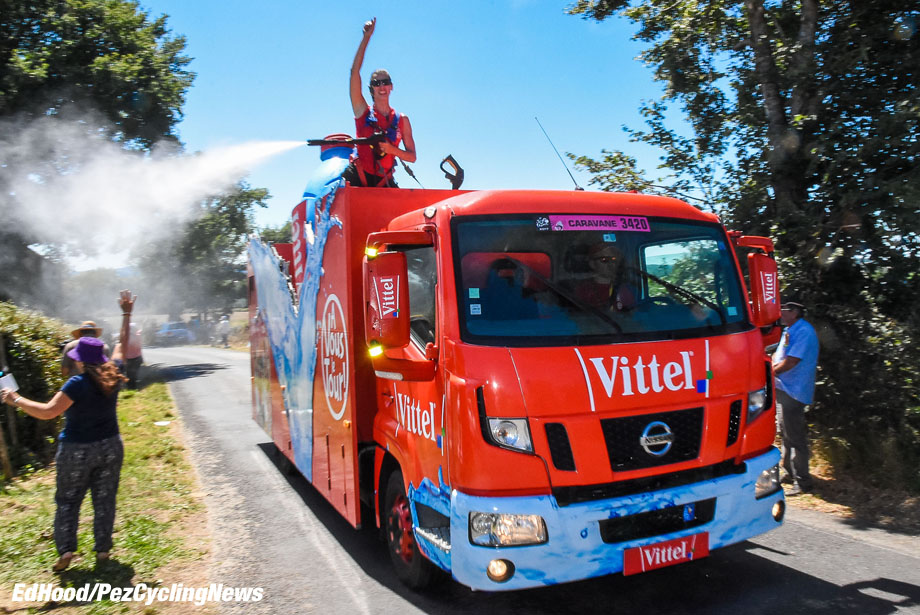 The Vittel spray girl cools us all down at the end of the caravan.

The Bora Hansgrohe car nicks part of our space but the good news is that team physio/chiro, Marcus has a TV on board.

There are four clear we hear from our new amigo; Thomas’s De Gendt (Lotto) and Voeckler (Direct Energie) plus an FDJ and two more.

Nothing to do but wait in the hot sun as team cars, vip’s and official cars whizz past – very few press cars. Only mad dogs and Scotsmen go out for pictures in the afternoon sun.

There’s the swarm – photog bikes everywhere, then the police bikes and then… 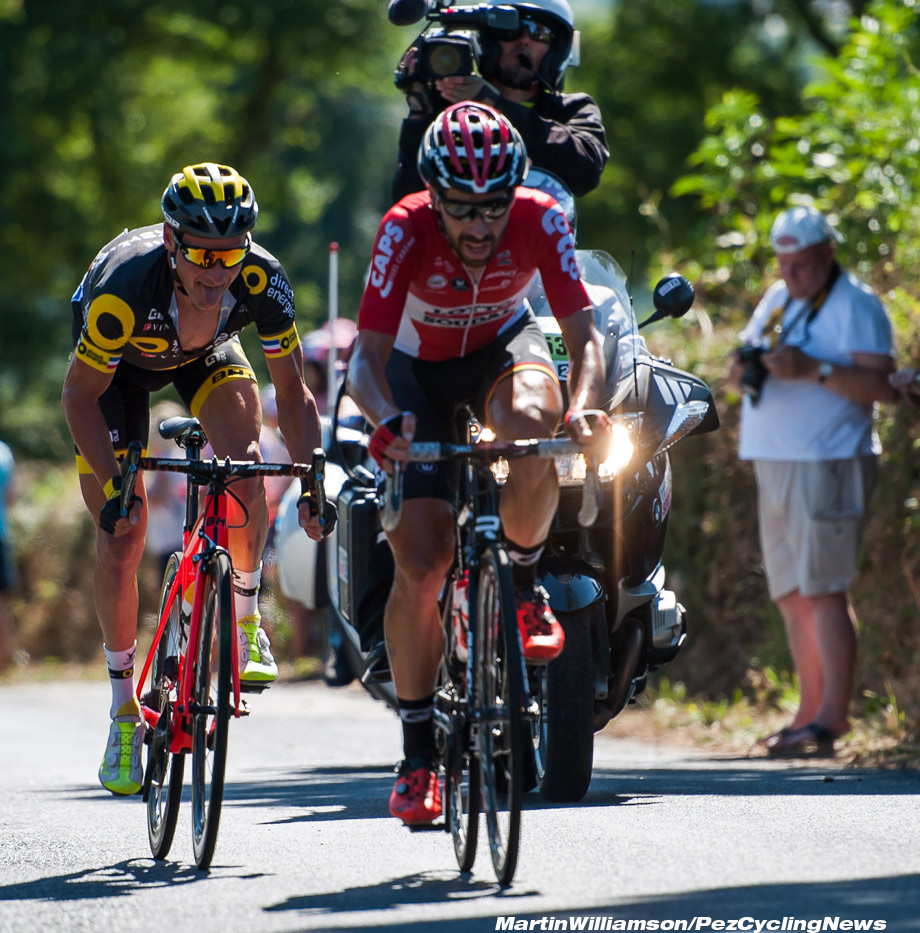 The two Tommies; Voeckler has to make a statement or two in his last Tour and De Gendt will be trying to usurp Wanty’s Frederik Backaert as number one baroudeur on the race; Backaert is on 566 K, De Gendt on 421K.

Then, solo a handful of seconds back, a LottoNl-Jumbo who we can’t identify, there’s no number on his bike, he must have punctured or had a mechanical. 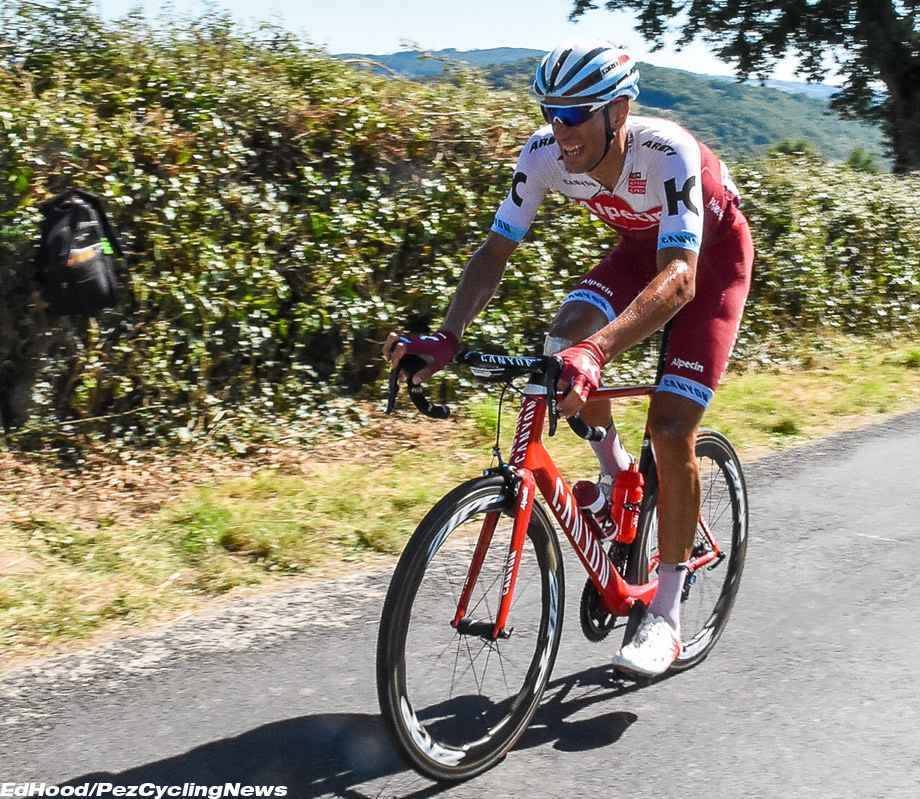 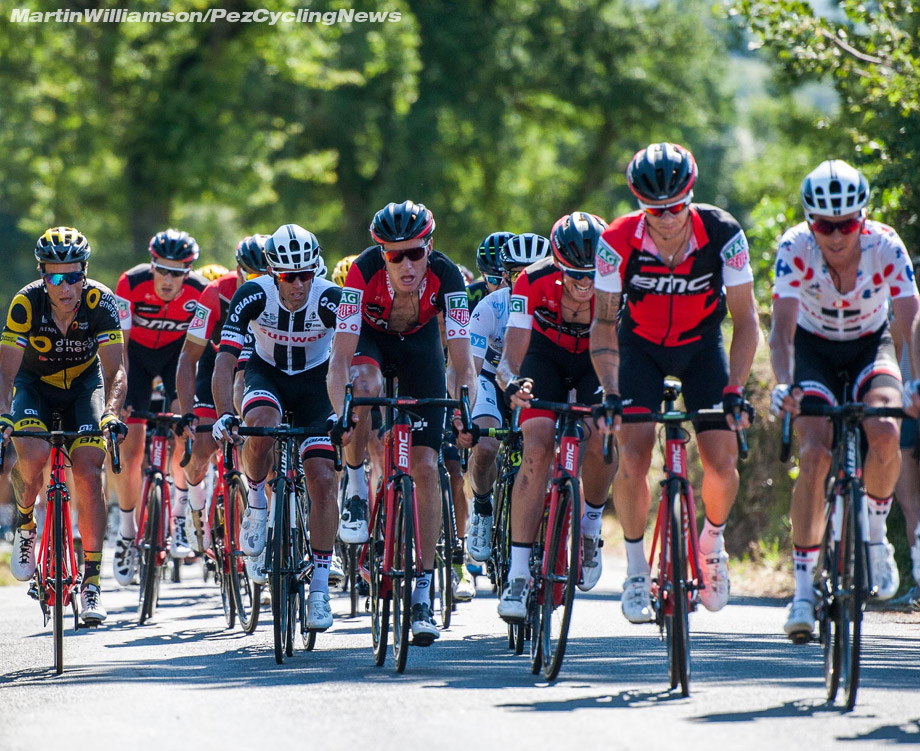 Behind it’s BMC driving the peloton for GVA – the escapees will all come back; they’re all wasted and the likes of Sky with Kiryienka are lending a hand to chase. 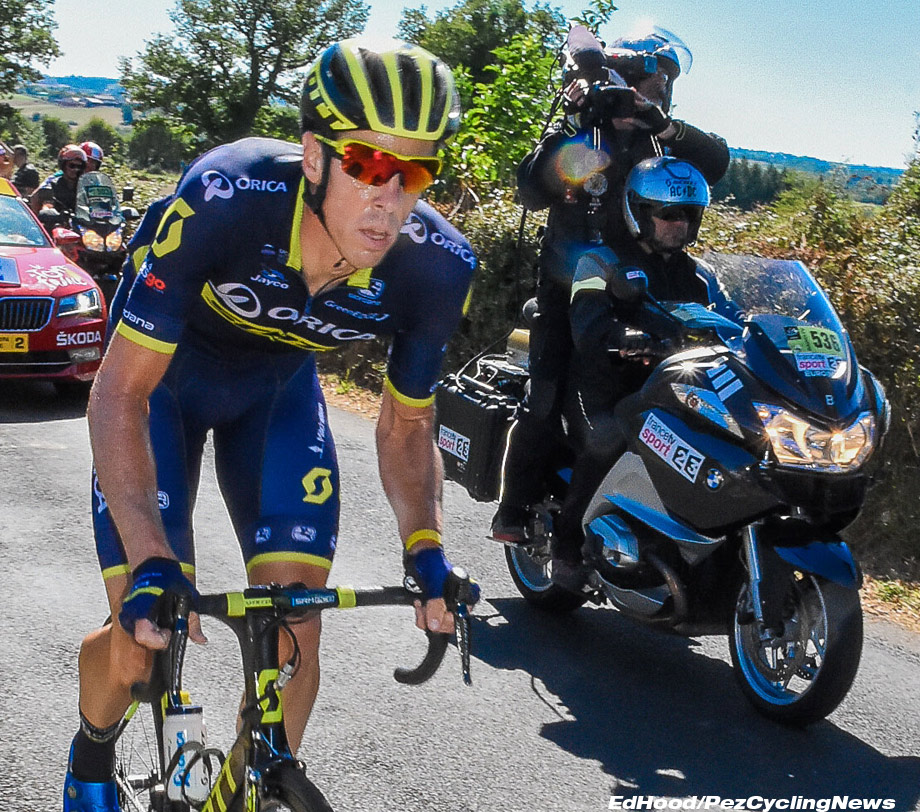 Despite the two climbs and the wind it’s still a big peloton – but there are casualties, like Orica-Scott’s former Paris-Roubaix winner, Aussie Matt Hayman. 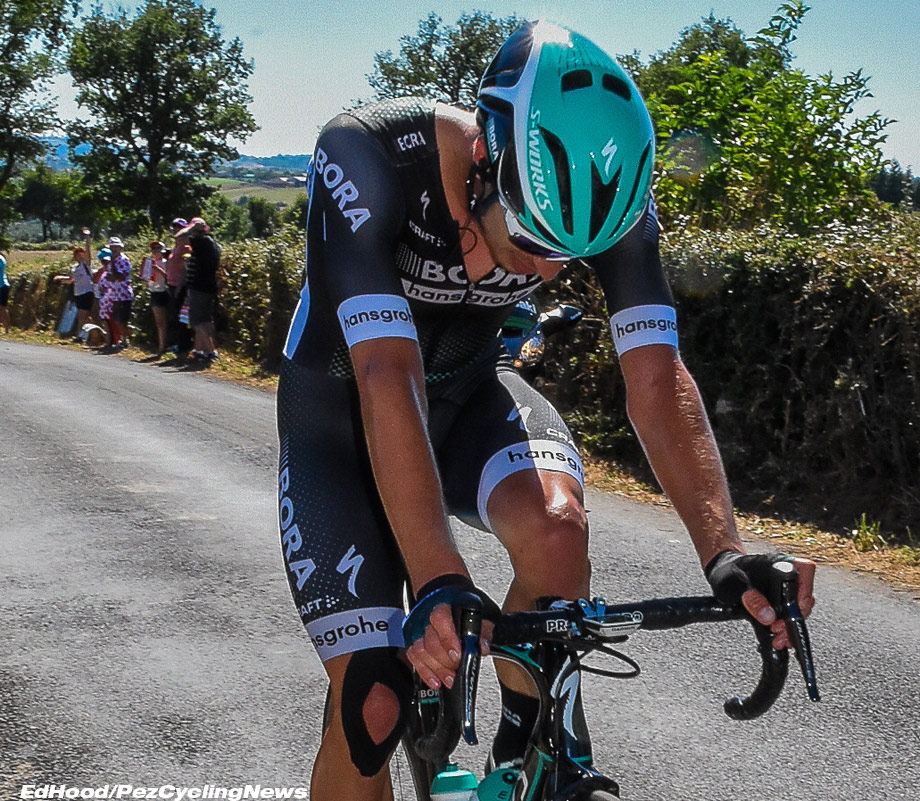 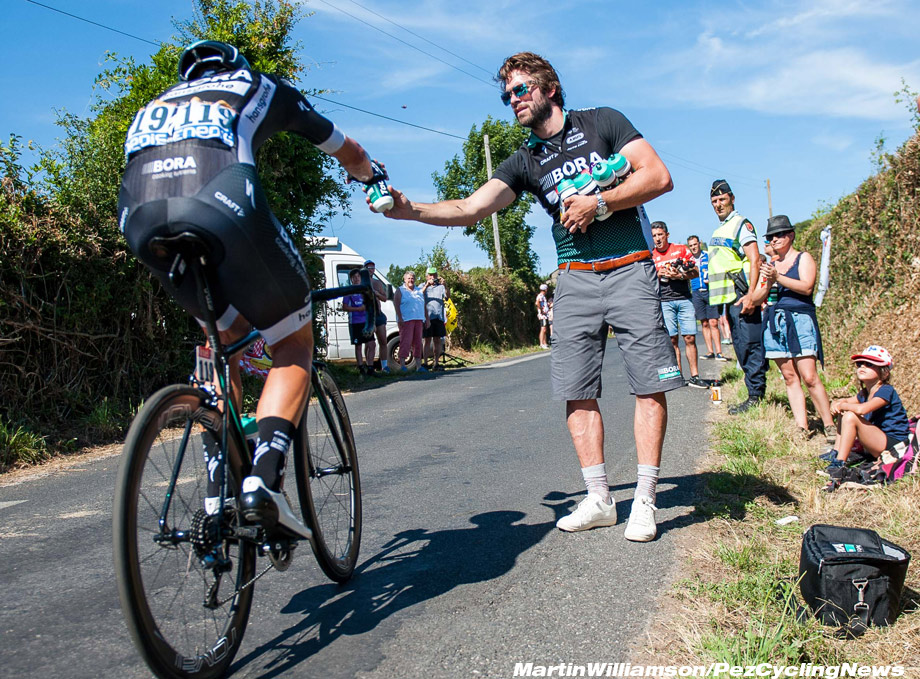 Bora boy, Rudiger Selig is wasted, the big German’s head hangs low and he’s riding at little more than jogging speed – the prime line isn’t far way but the run home isn’t flat and he has an hour of pain ahead.

He does perk up a little when he sees Marcus with a bottle for him, however. 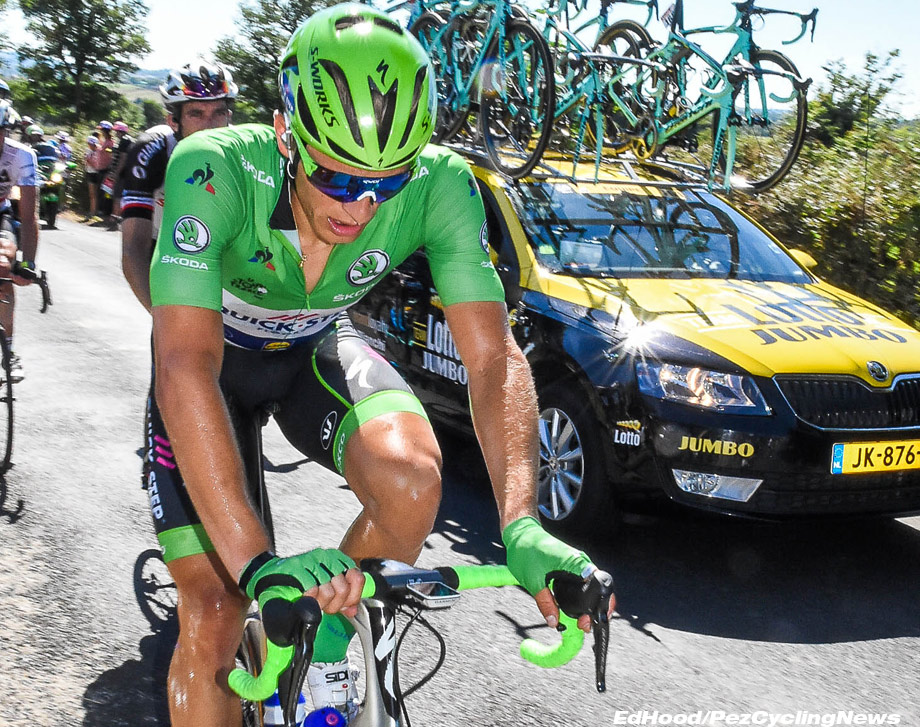 Hopefully he’ll be able to jump Quick-Step’s German green jerseyed Kittel’s little gruppo, Marcel’s definitely not enjoying his day. Steve Cummings is back there to keep him company. 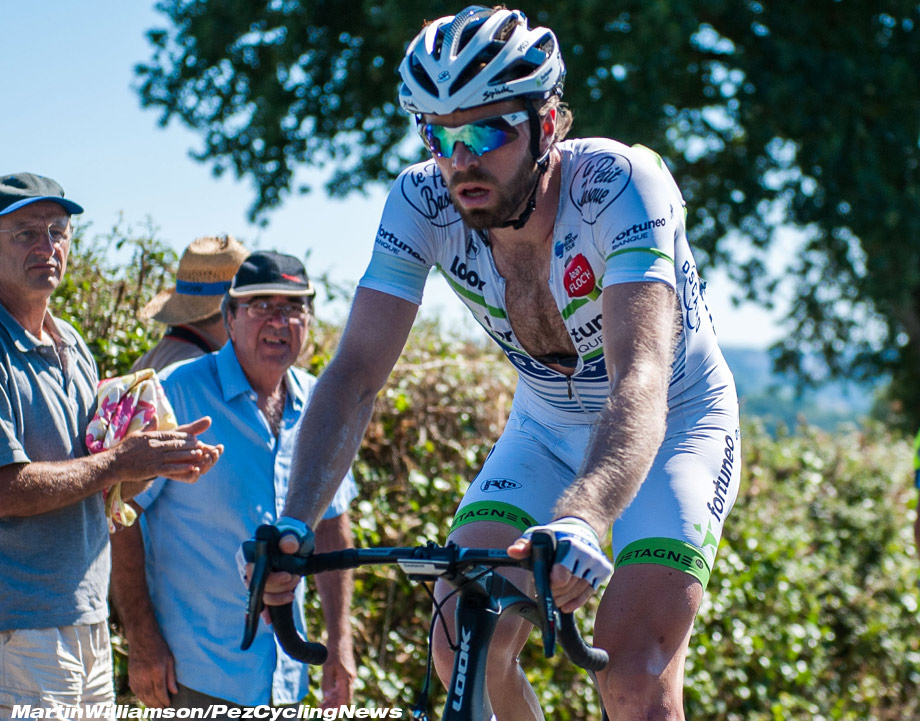 And we haven’t seen our boy Dan; the solid GB sprinter doesn’t get along with gravity but has been improving in every sprint finish; up to fifth in the most recent finale so his team car is back there to chaperone him. 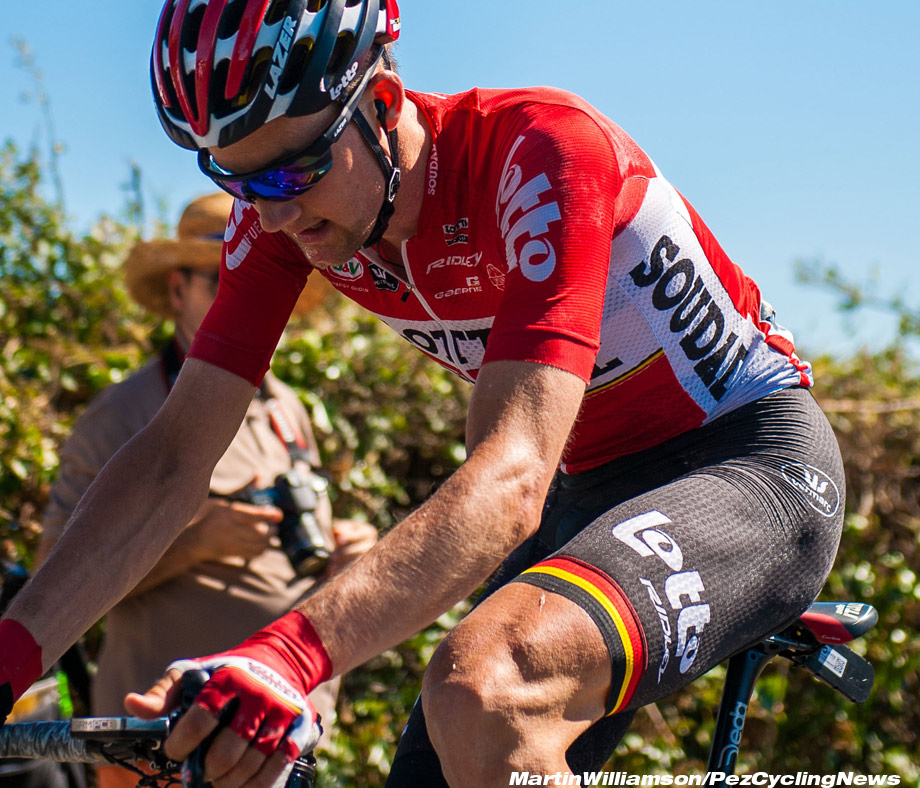 But he’s not last on the road, that’s Lotto’s Classics Man, Tim Wellens; we were talking to the Belgian yesterday at the start and he was in good fettle – perhaps he’s punctured at a bad time today?

The voiture balait shadows him like a giant white vulture.

We jump the convoy, even before the breakdown truck; you can’t get mixed up with those civilians; we’ve got digs to find and a deadline to meet.

We put the pieces together by text and email:

# Matthews wins from GVA, making it look easy we hear.

# Aru is badly positioned for the charge up the finish ‘ramp’ and loses the jersey.

# De Gendt finishes 90th @ 2:18 and wins the most aggressive rider award; we won’t know about his kilometres for ‘Baroudeur of the race’ until tomorrow.

Tomorrow is for the breakaway again – who knows what will happen, we’ve got a proper race going on here.