Stage Report: The 10% slopes on the climb to Mende drew out all the suffering and effort that we love about the Tour de France.  Going from the break, Astana’s Omar Fraile threw down the biggest on the 3km climb to the finish above Mende for a brilliant and well deserved win, while the Tour’s Top 3 stuck together but pulled more time on the rest of the contenders. 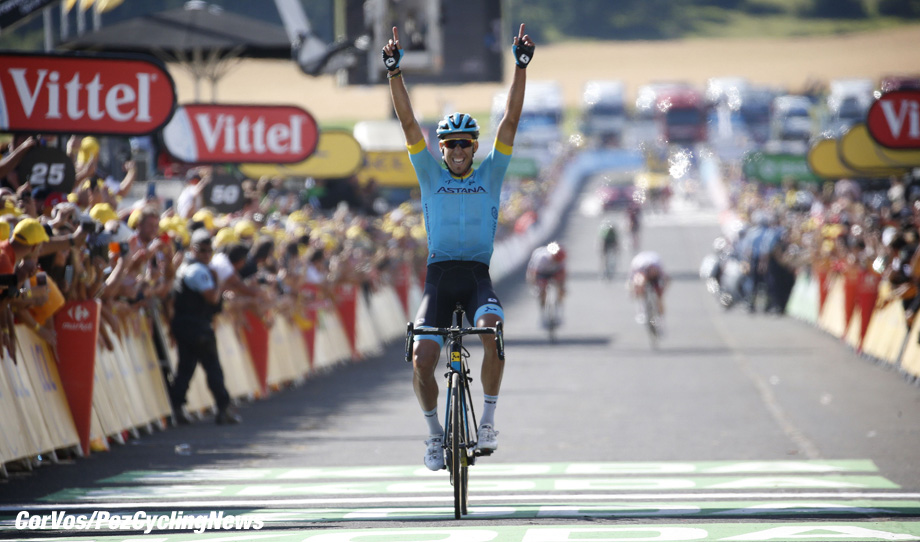 The 2018 Tour de France GC big boys let a large group of stage hunters open a gap of some 20 minutes, from which a break with some serious stage hunters like Peter Sagan, Greg Van Avermaet, Sylvain Chavanel and Philipe Gilbert plotted their stage winning strategies. 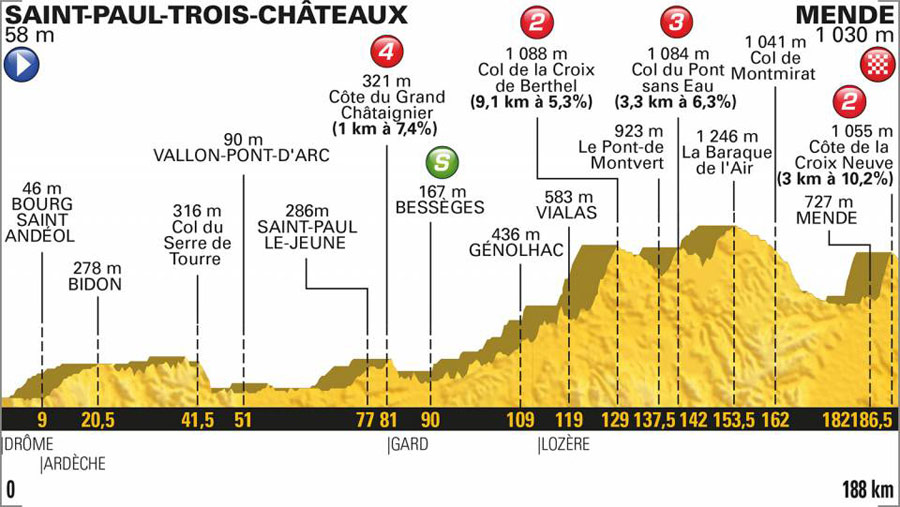 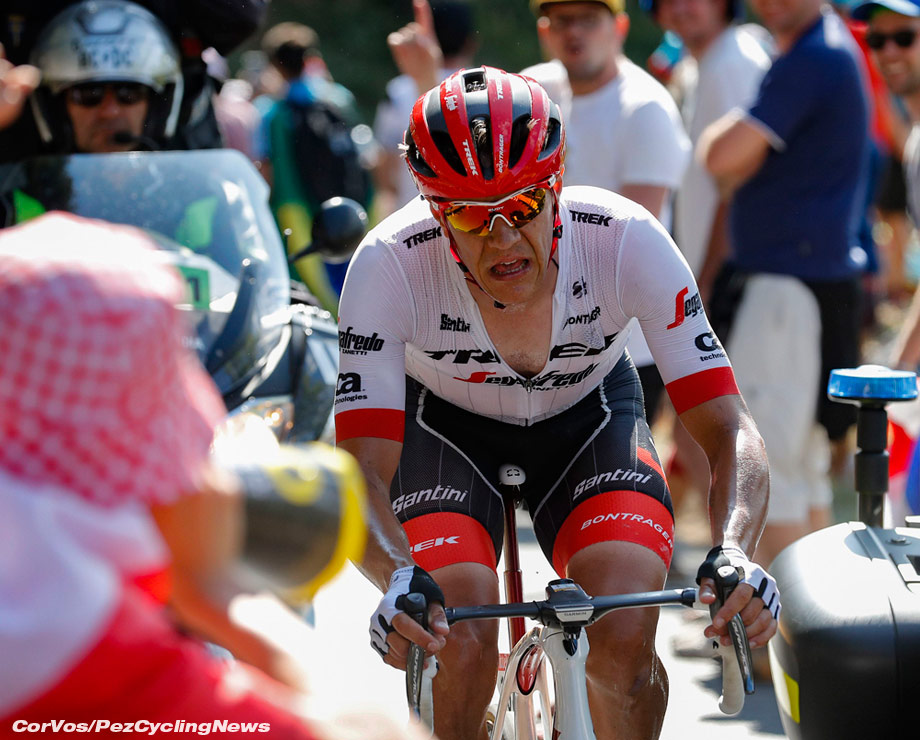 Trek-Segafredo’s Jasper Stuyven netted the most combative rider prize, but his sad expression on the podium gave away his true feelings about missing out on the stage win. He made the big bid for glory by going solo from the break with 35km to go and hitting the slopes in Mende alone – but couldn’t match the power and desire of Fraile. 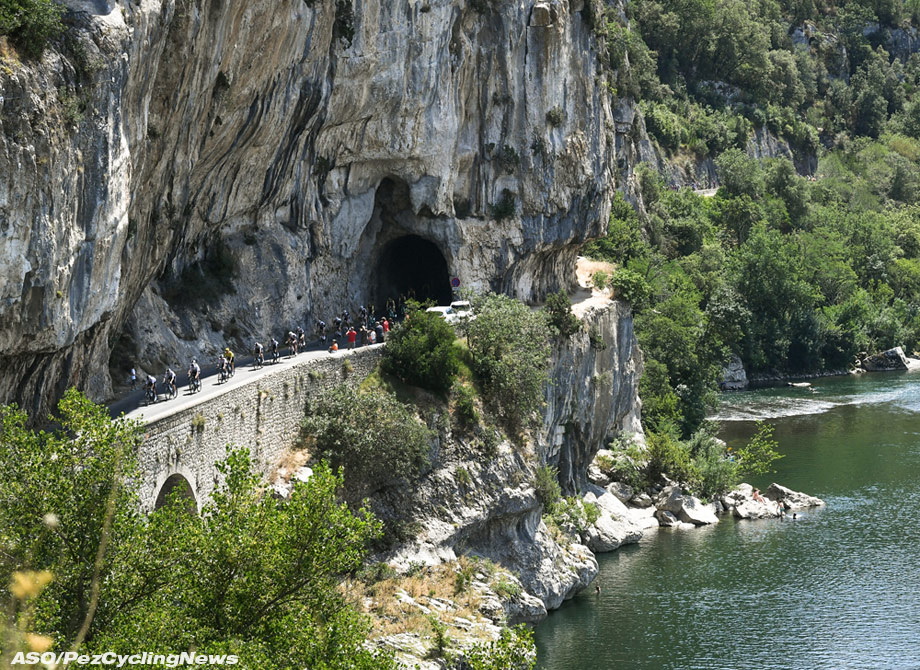 Meanwhile, back in the bunch, everyone eyed everyone else and stuck together – biding time to the final climb.  With some big days still ahead in the Pyrenees, this was a day to conserve energy where possible, and save the heroics for later (ie: the final 3km climb…)  Onto the slopes and the attacks popped off like kernels from a roasting cob of corn (nod to summertime bbq’s here at PEZ HQ…).  But like those little yellow nuggets – leaving the safety of the husk meant a firey death, with the only solution to remain unstuck. 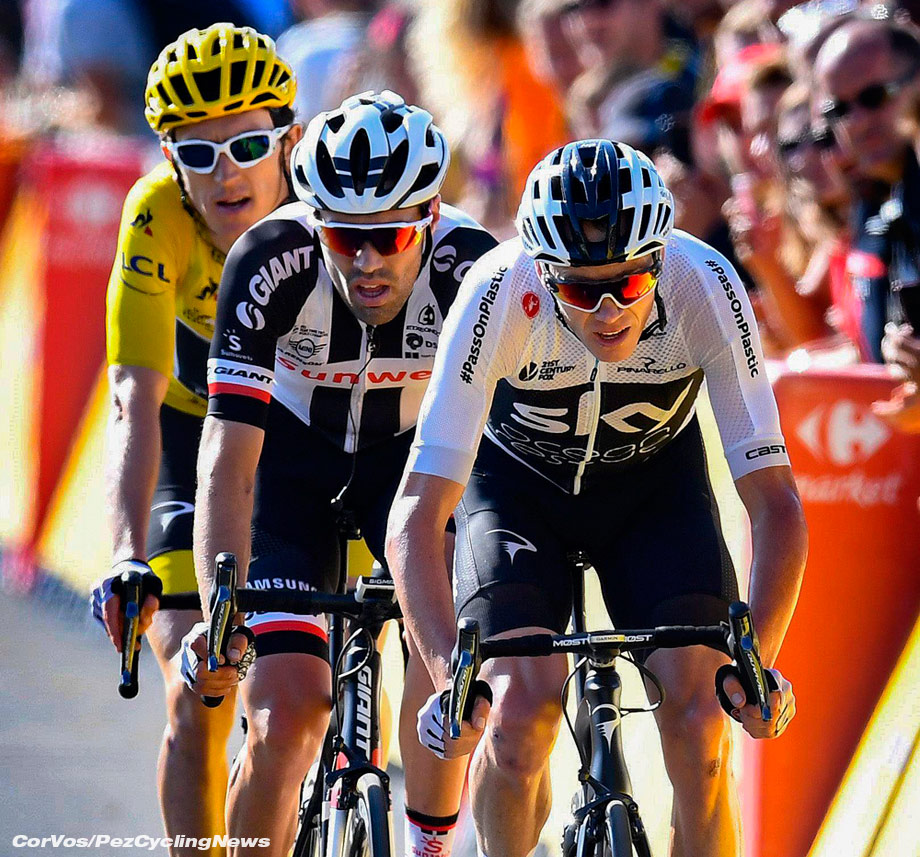 Over the top it was Thomas, Froome, and Dumoulin together and in order – each unable to get away on their own. Froome finally did a ceremonial piece of work for Thomas by leading the trio through the final hundred meters or so and over the line, followed by the rest of the GC pecking order in dribs and drabs, each losing a few more seconds to the final podium leaders. Stage Summary Courtesy of ASO:
Spain’s Omar Fraile of Astana took his first Tour de France stage victory, in line with the tradition of Spanish winners in Mende after Marcos Serrano in 2005 and Joaquim “Purito” Rodriguez in 2010. The Basque attacker fended off Julian Alaphilippe who took the second place. 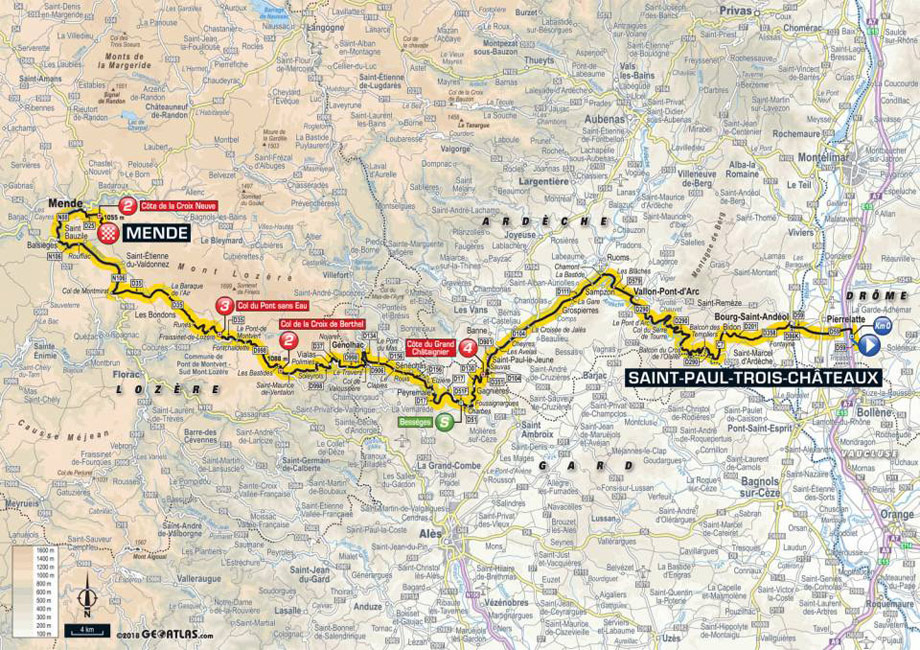 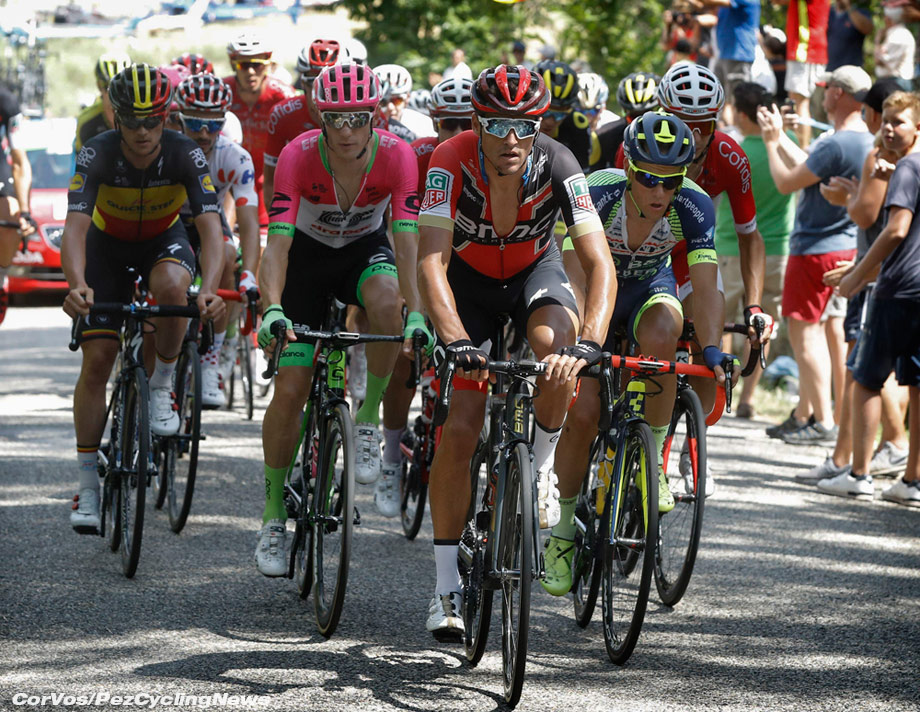 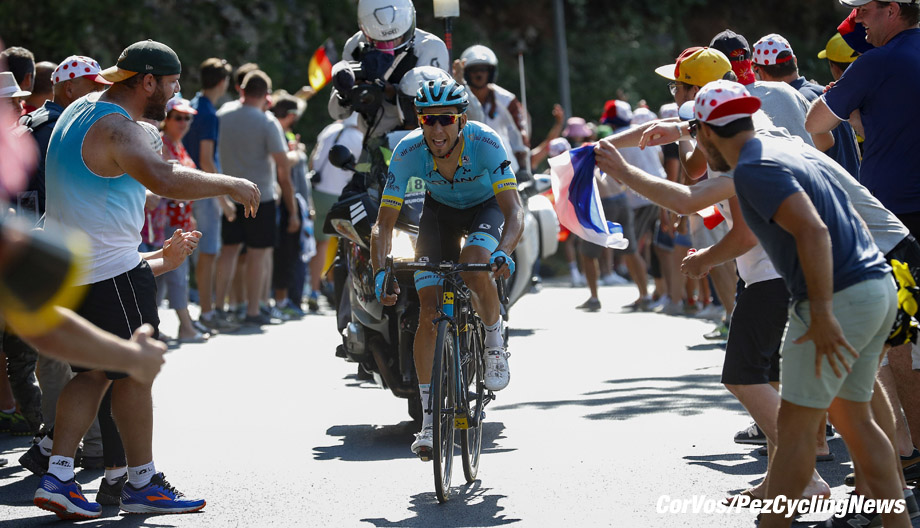 Alaphilippe took 1 KOM point at côte du Grand Châtaignier and Sagan won the intermediate sprint in Bessèges (km 90) just after the breakaway extended his lead to 7’10’’. Boudat and Lampaert forced the green jersey holder to really sprint for the 16th intermediate sprint victory at the Tour de France (since stage 14 in 2012). Meanwhile the time gap went above ten minutes, Izagirre rode away solo in the climb to col de la Croix de Berthel where Alaphilippe took two more KOM points. Slagter and Stuyven rejoined him in the downhill. With 50km to go, just before the col du Pont sans Eau, the leading trio was 40’’ ahead of their former breakaway companions and 13’40’’ ahead of the peloton led by Team Sky. 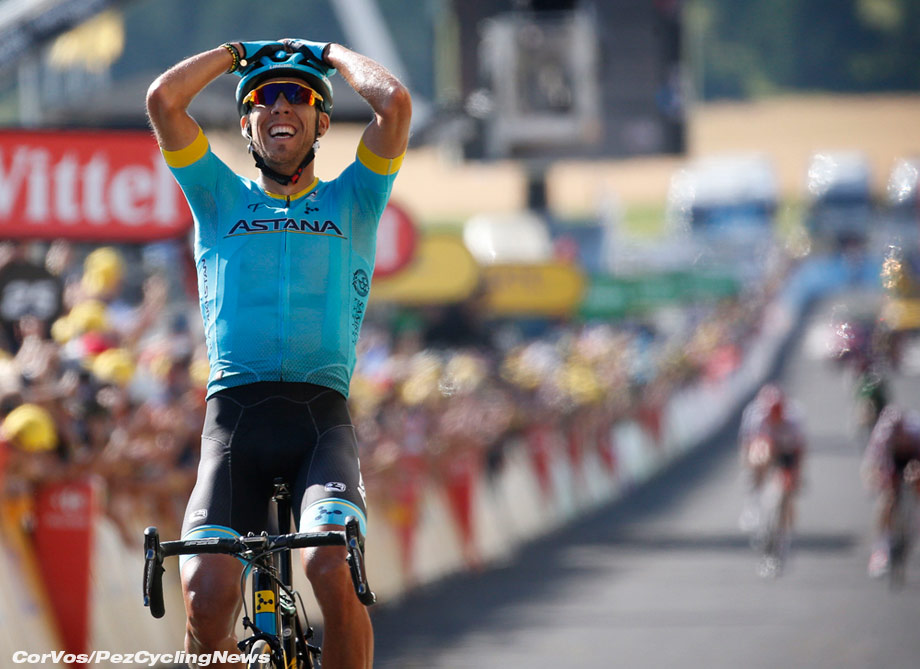 Stuyven alone for 33km
Stuyven forged on by himself with 35km to go. 10km before the end, he was 1’40’’ ahead of the chasing group led by Gilbert meanwhile the peloton was cruising almost twenty minutes behind. The gap was 1’30’’ at the bottom of the final ascent to la Croix Neuve. Fraile was first to come across to Stuyven meanwhile Alaphilippe made his move 3km before the end. The Frenchman in the polka dot jersey didn’t manage to come across to the Basque rider who scored Astana’s 13th stage victory in the Tour de France, his personal first. His compatriots Serrano and Rodriguez also claimed their first Tour de France victory in Mende. Primoz Roglic was the first of the favourites to cross the line. Geraint Thomas kept the situation under control to finish with Chris Froome and Tom Dumoulin. The Welshman retained the yellow jersey. Keep it dialed to PEZ for more pics, quotes and action from Le Tour.

PEZ At The TOUR Gallery: The Art Of Cycling, Live!