Solo win for the BORA-hansgrohe rider

Stage Report: Stage 12 was a lumpy and hot day for the Tour de France and there were a lot of tired legs from the ascents of Mont Ventoux on Wednesday. The break of the day took a big lead, (13 minutes) to fight it out for the victory. BORA-hansgrohe’s Nils Politt was the strongest in the front group and went solo after softening up the opposition. Tadej Pogačar (UAE Team Emirates) was happy to finish another day in yellow. 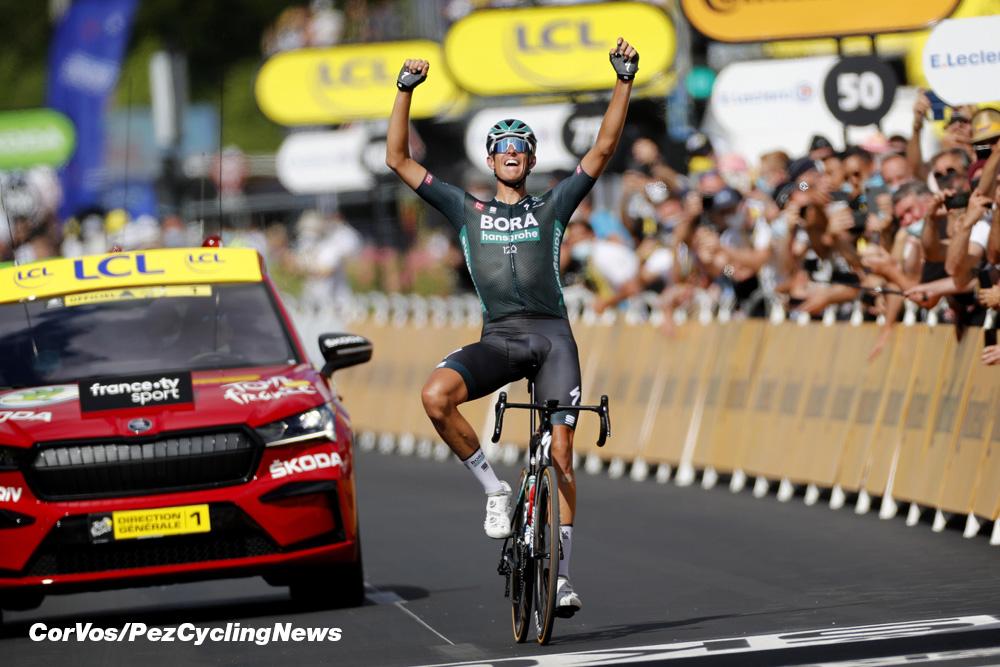 – The final kilometre of Stage 12 and read our full report and pics below:-

The twelfth stage of the Tour de France was won by Nils Politt. The strong German from BORA-hansgrohe was part of stage break, he managed to survive the first selection in the finalé and then rode away from his companions Harry Sweeny and Imanol Erviti for the win. 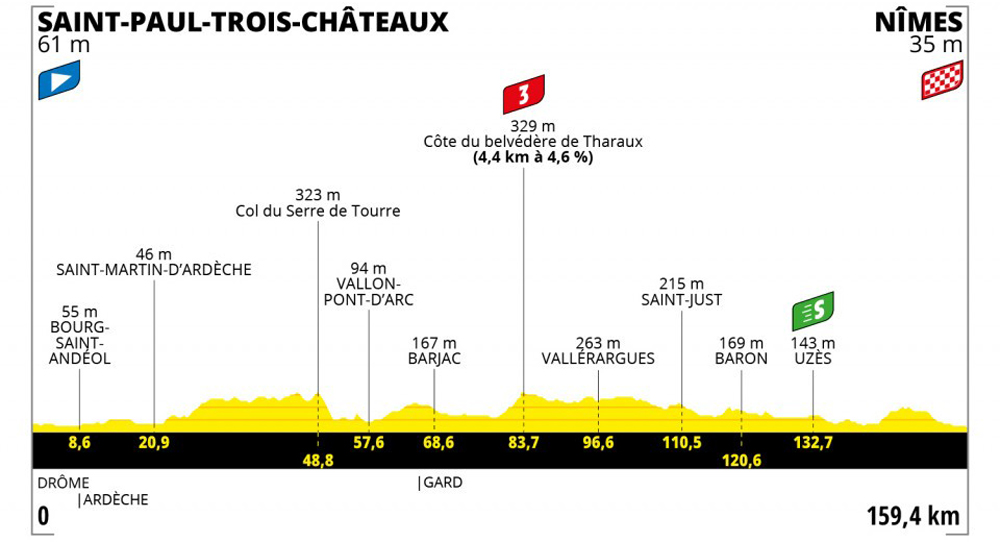 Tour boss Christian Prudhomme describes stage 12: “After a journey along the magical Gorges de l’Ardèche that will for the first time be entirely visited by the Tour, this stage should end with a bunched sprint in Nîmes, like in 2019 with a similar finish. One will however have to be extra careful: the wind could be a key factor on wide open roads and echelons could occur.” 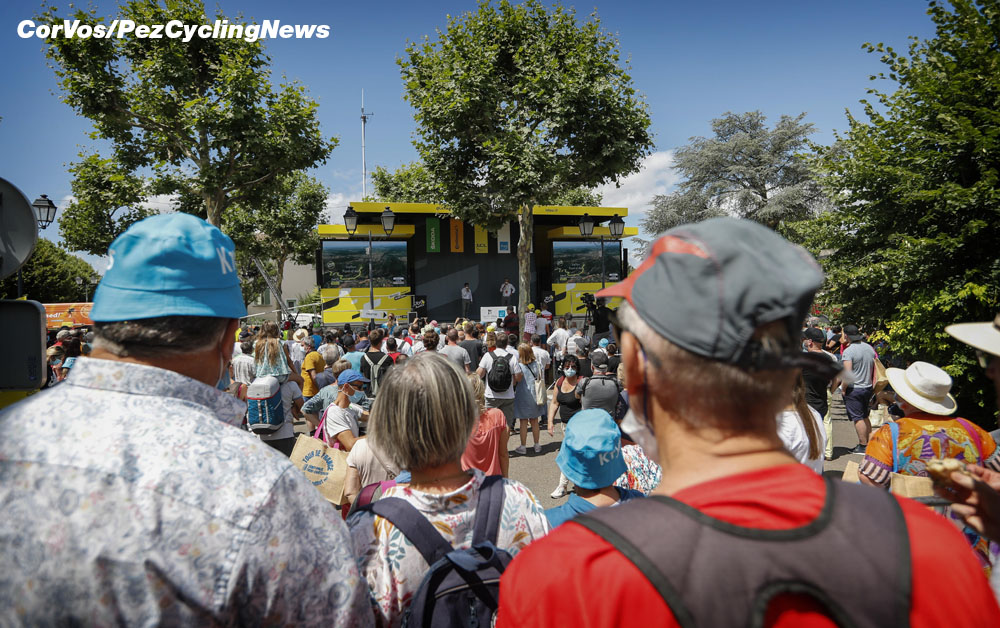 After the very tough stage to Malaucéne, with the double climb of Mont Ventoux, today was a relatively flat stage from Saint-Paul-Troix-Châteaux to Nîmes. However, the wind could play a crucial role in the open plains of the Ardèche. With a strong north wind, echelon danger was lurking, especially in the first half of the race and perhaps also in the final. 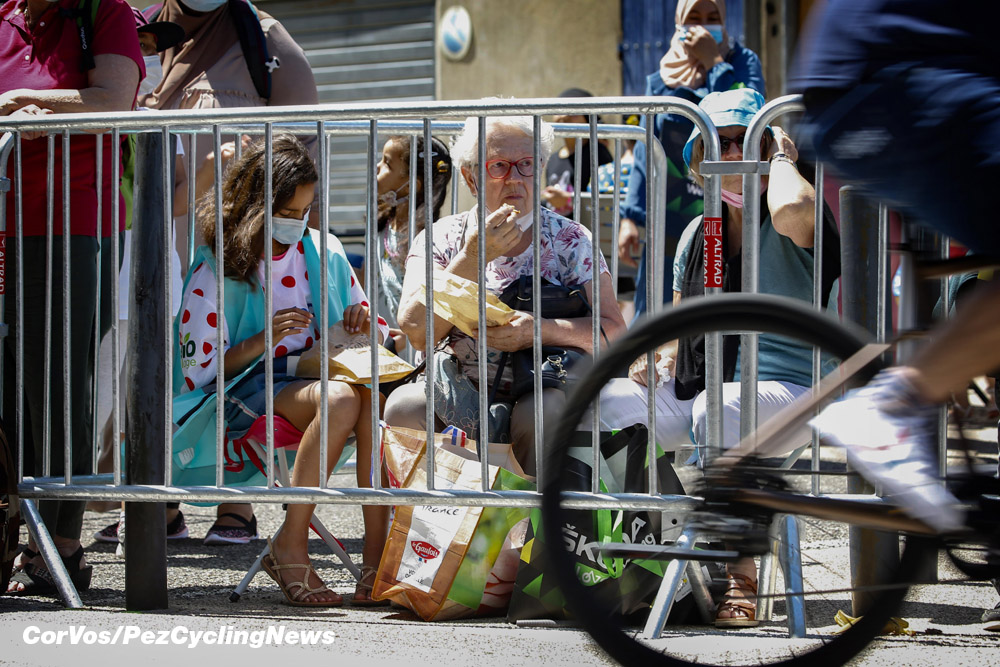 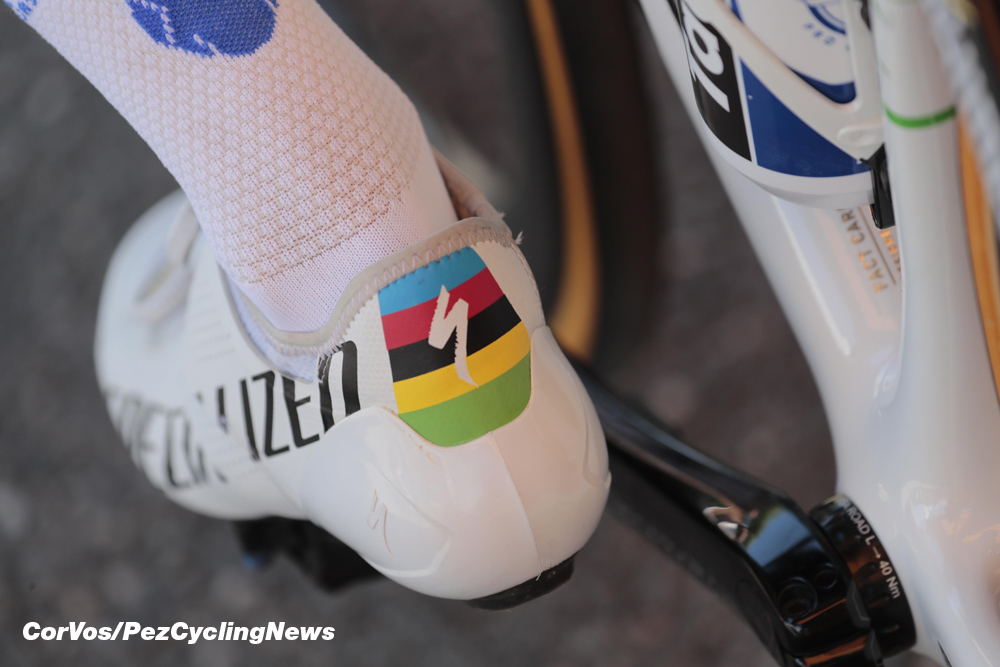 Who’s shoes are these?

In sunny and windy conditions, after some delay during the neutralised zone, the race got under way. The fact that the wind was favourable for echelons was immediately apparent from the start. The men of Deceuninck – Quick-Step and BORA-hansgrohe significantly increased the pace and we saw the first riders drop out in the back of the peloton. Bruno Armirail, Carlos Verona and Thomas De Gendt were all in trouble. 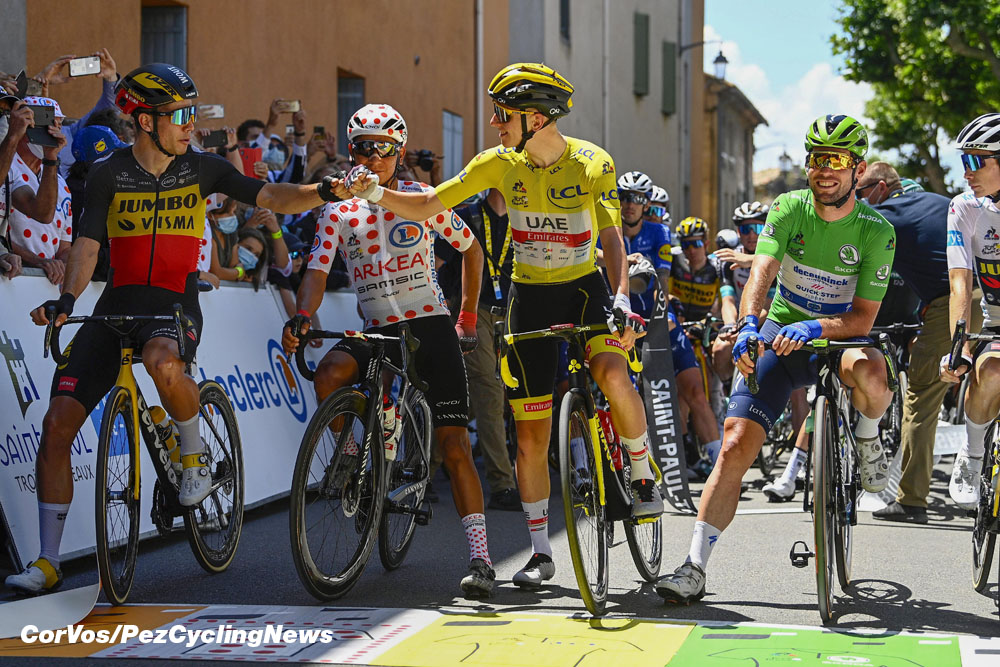 The top men line up for the stage 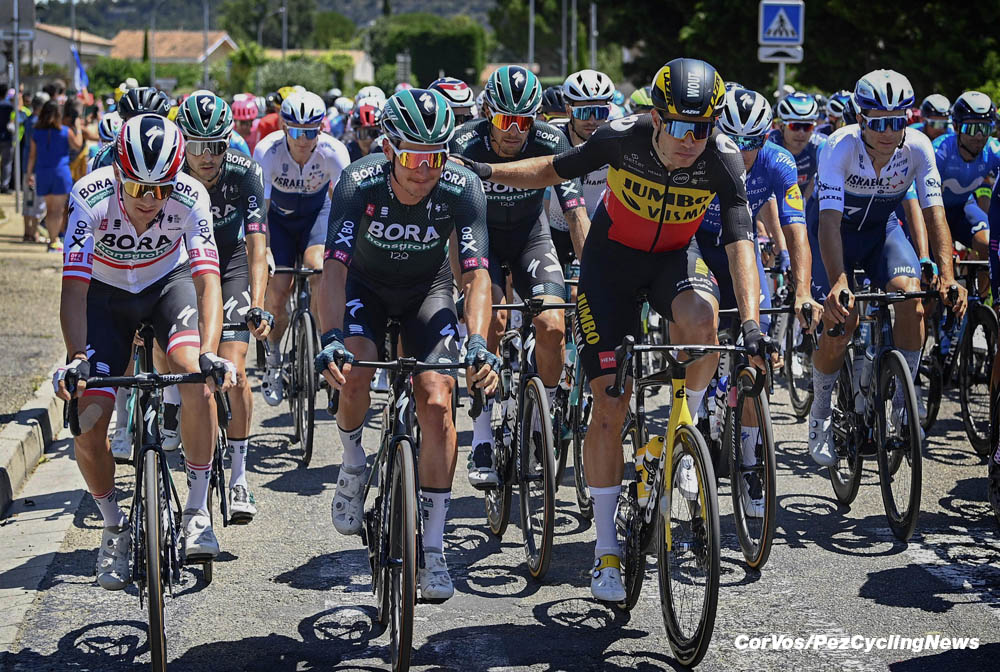 The peloton had already split into several pieces after barely 10 kilometres. The most important GC riders were in the first echelon. Guillaume Martin and Pello Bilbao, ninth and tenth on the general classification, had been surprised and quickly had to chase. In the crazy hour of the race, the top teams disappeared from the front after a while, this was the signal for many riders to set up an attack. 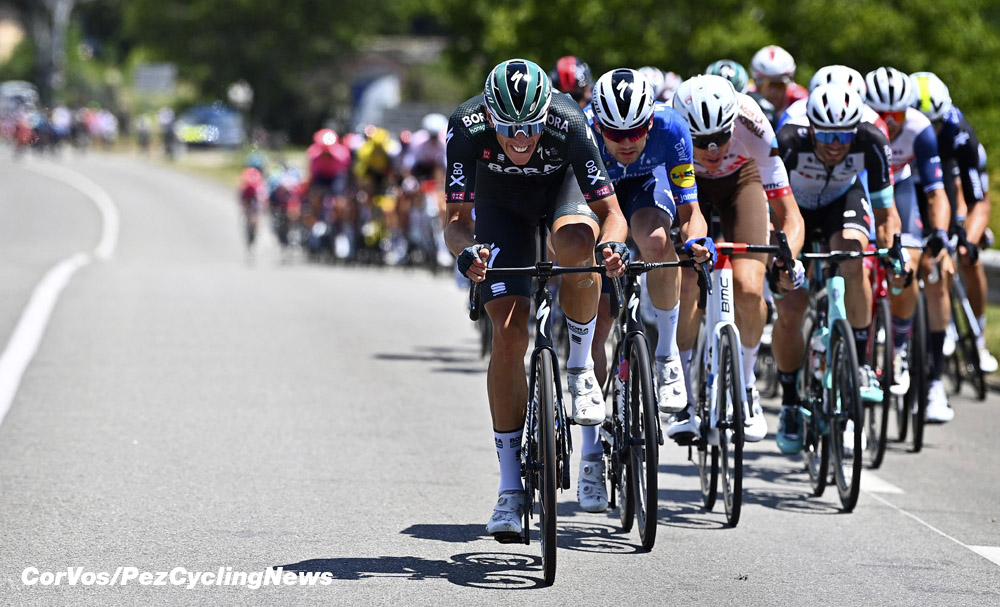 Nearly everyone wanted in the break of the day 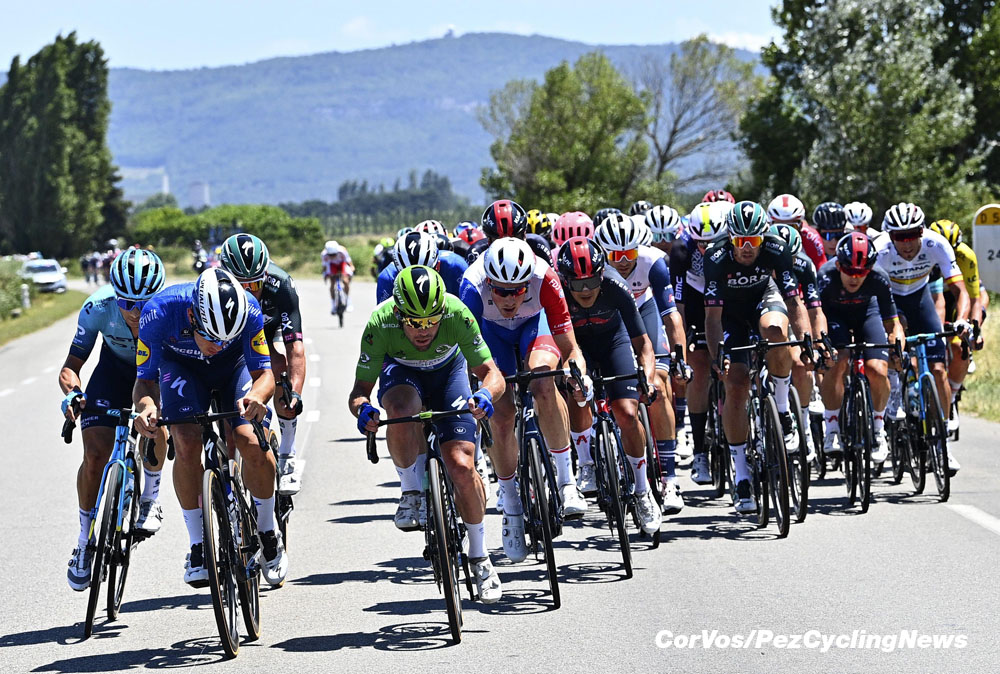 The crosswind caused some echelons

Calm had returned to the peloton, allowing groups that had dropped to rejoin. In the large group, a sprinter’s team was not prepared to start the chase, so the thirteen leaders managed to get further and further away. Given the presence of fast riders such as Küng, Bissegger, Pollit and Van Moer, plus fast finishers Greipel, Theuns, Boasson Hagen and Mezgec, the leading group was strong.

The speed was high until the break managed to escape

The best placed rider in the leading group, Henao, started the day in 22nd place on the general classification. The Colombian’s deficit had grown to just over 50 minutes in previous stages, so there was no danger for leader Tadej Pogačar’s men. The UAE Team Emirates riders did lead the peloton, but there was absolutely no question of an organised chase. The thirteen escapees were given safe conduct on their way to Nîmes. 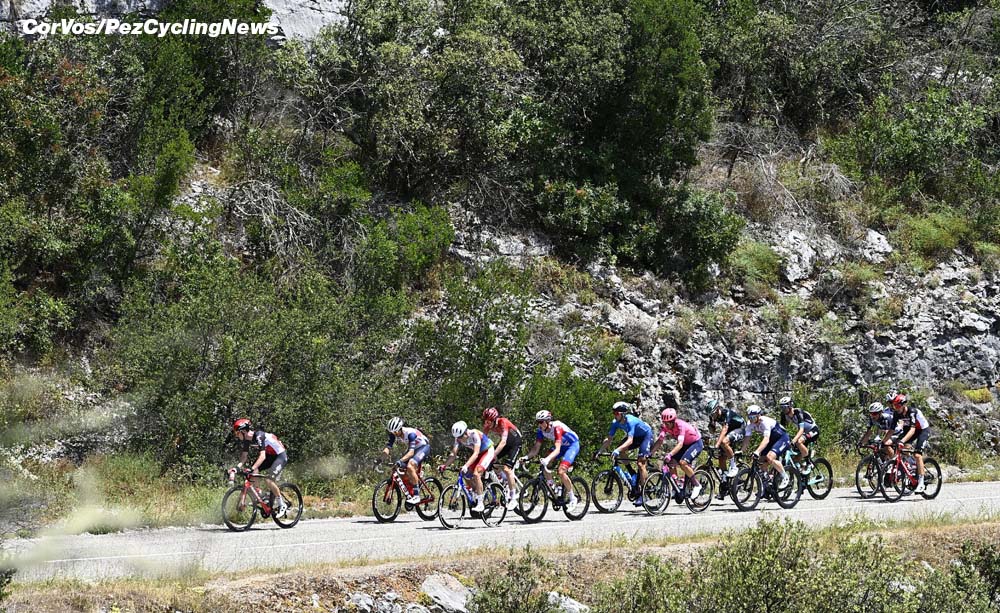 Eventually the break did form

At the top of the Côte du belvédère de Tharaux (4.4km at 4.6%), the only classified climb on the route, Politt was first for the two mountain points. Küng also grabbed another point, but both men posed no threat to mountain king Nairo Quintana. It was mainly a matter of waiting for first attack in the leading group and Politt decided to open proceedings with less than 50 kilometres to go. The strong German accelerated several times, but could not get away. 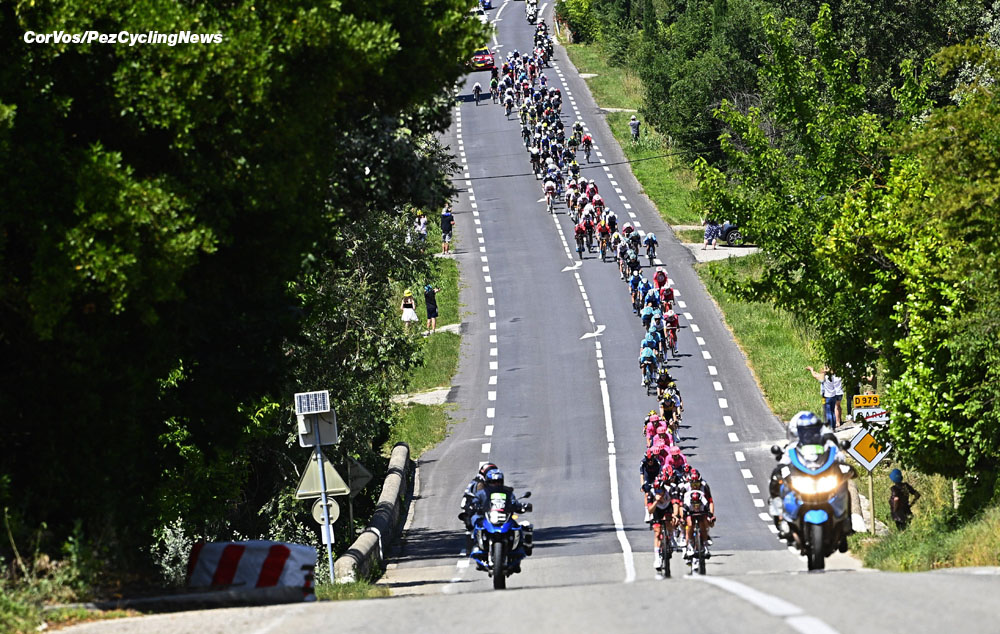 The peloton were pulled into a long line

Sweeny was the next rider to try something and the Lotto Soudal Australian was the instigator of another breakaway of four. Tour debutant Sweeny was joined by Politt and Küng and the experienced Erviti and these four raced further and further away from their fellow escapees. In the second group, the cooperation was far from good, while Politt, Küng, Sweeny and Erviti worked well together. The difference between the two groups crept towards 30 seconds with 30 kilometres to go. 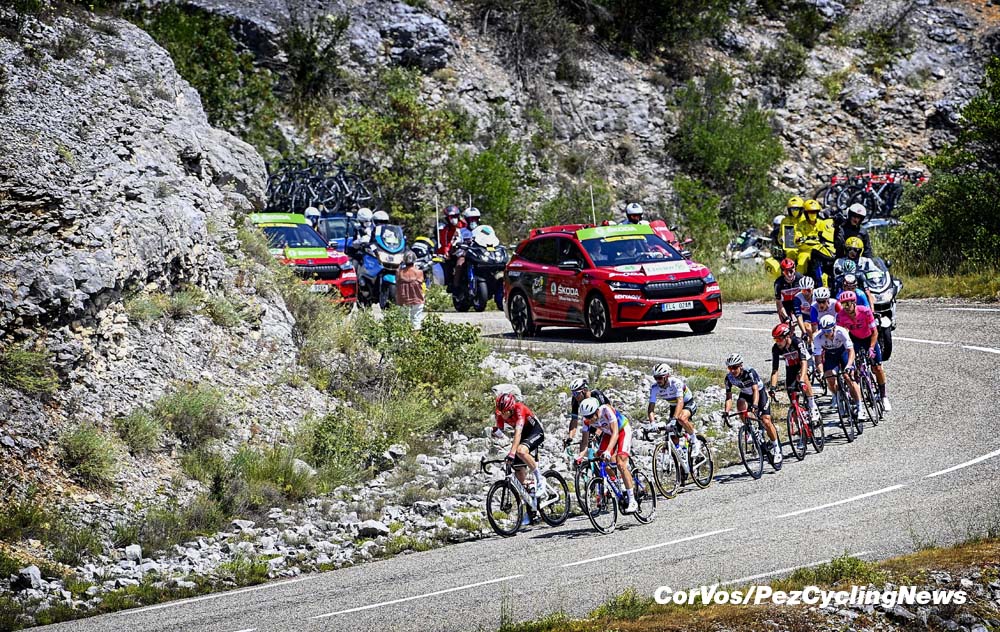 The break had nearly 13 minutes at one point 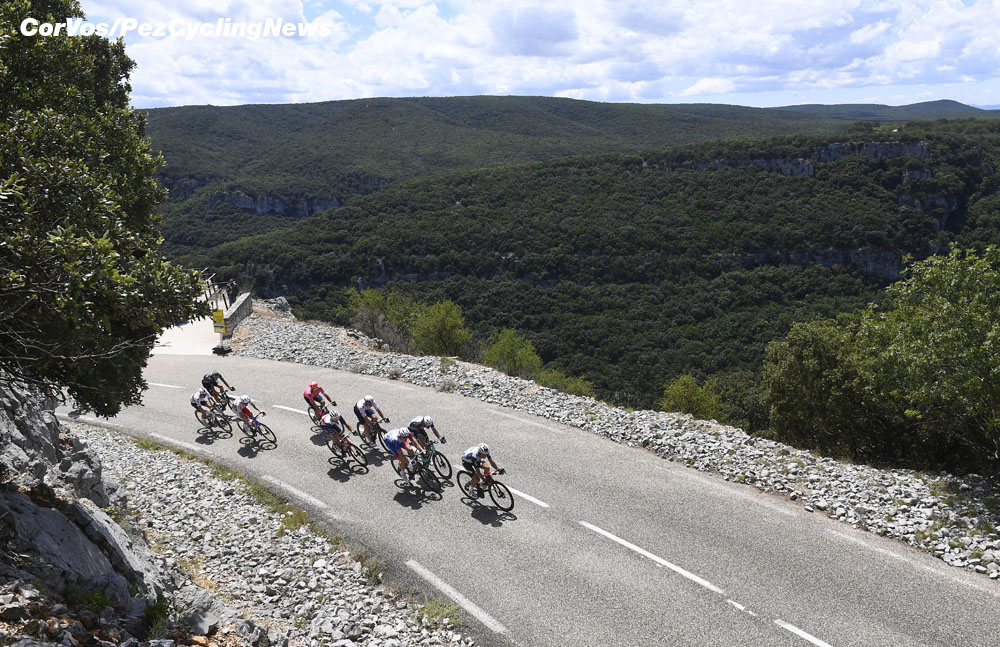 Only one climb today, but the break went for it

Alaphilippe and his companions sensed the danger and decided to put their individual interests aside for a while in order to keep the difference with the four leaders within limits. At the intermediate sprint in Uzès, where Politt grab the full points, the lead of the four riders at the head of the race was clocked at 30 seconds. In the chasing group, the force slowly disappeared and that was noticeable in the time difference: the lead of the four suddenly doubled. 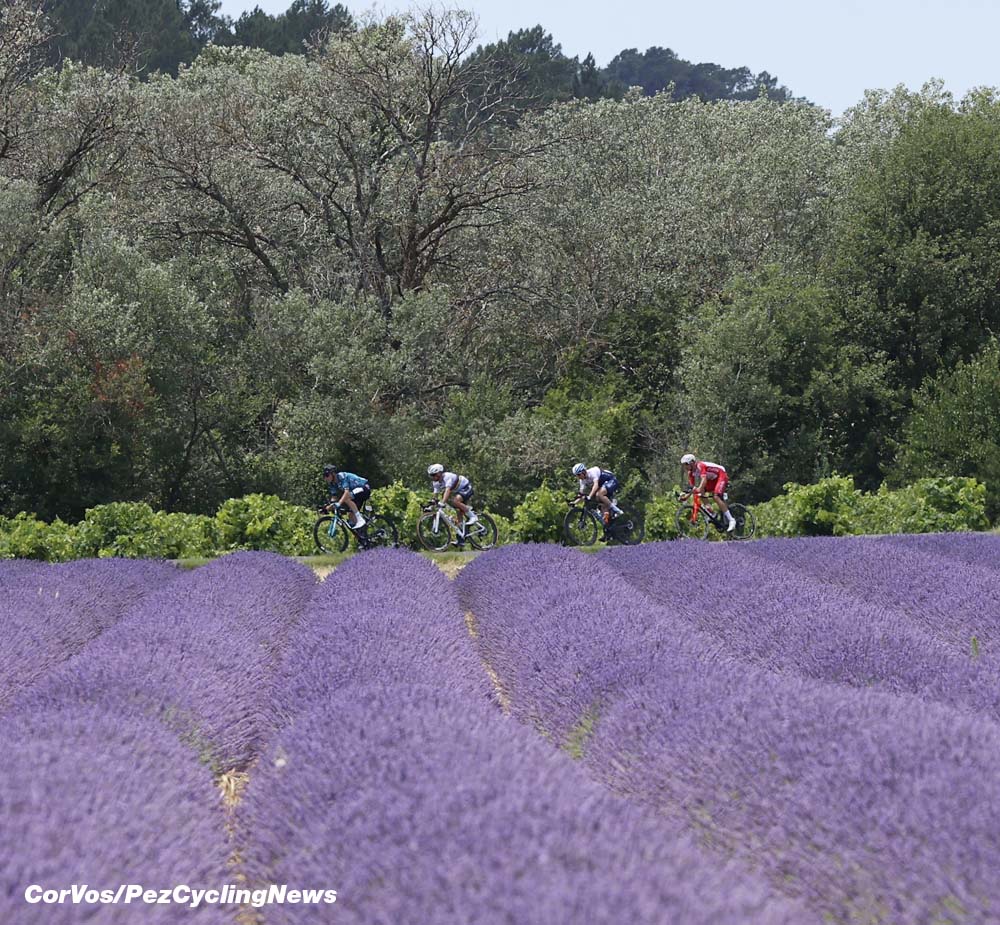 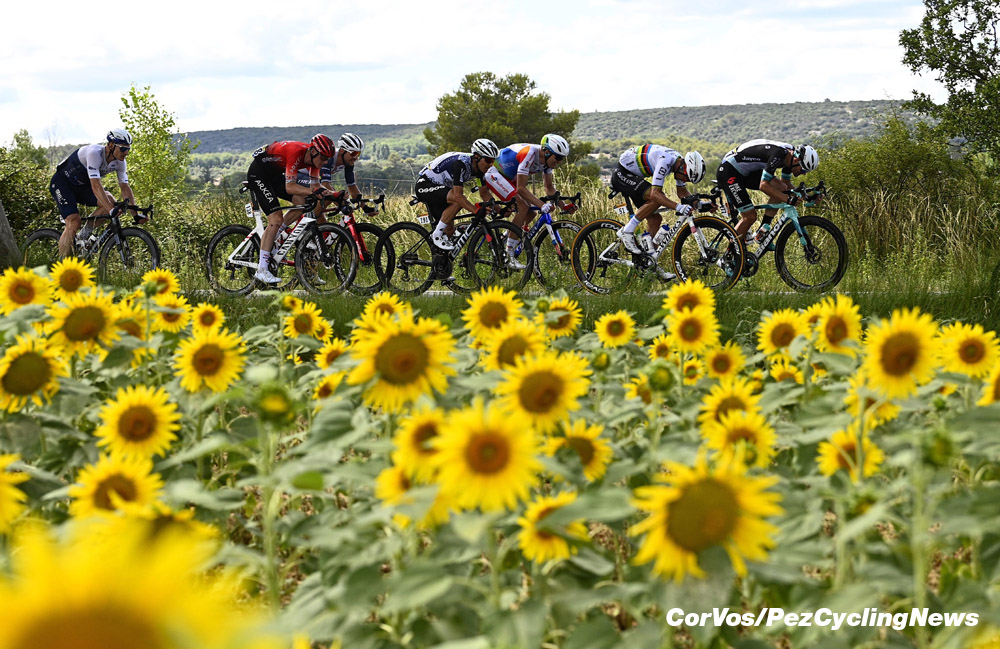 And here are the sunflowers

On an uncategorised slope, 15 kilometres from the finish, Sweeny decided to put in an attack. Politt and Erviti managed to catch him with some difficulty, surprisingly it was too fast for Küng. The Swiss time trialist had clearly blown and would no longer fight for the stage victory. Politt did manage to get himself into a promising position over the climb and managed to shake off his last opponents on his terrain… the flat roads towards Nîmes. 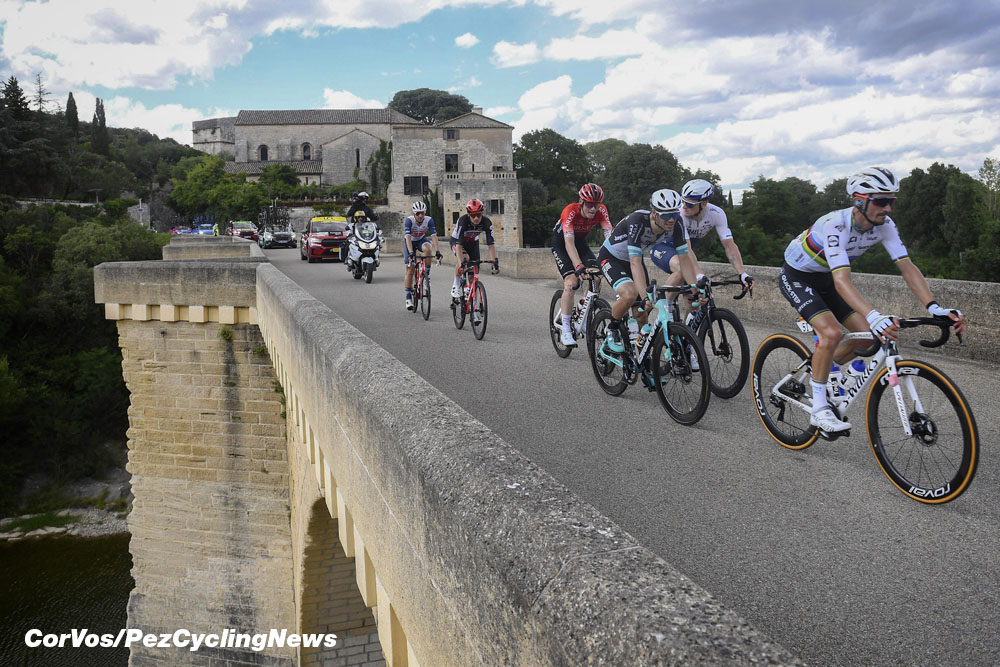 It was a strong group, but the peloton wasn’t too interested

Politt attacked 10 kilometres from the finish, Sweeny and Erviti had to bow their heads and watch Politt disappear into the distance. The BORA-hansgrohe rider with his mouth wide open, managed to pull away in time trial style for 20 seconds, this turned out to be the decisive moment of the race. Politt was able to celebrate his first Grand Tour victory in the last kilometre, on the day that his teammate Peter Sagan decided to leave the 2021 Tour de France. 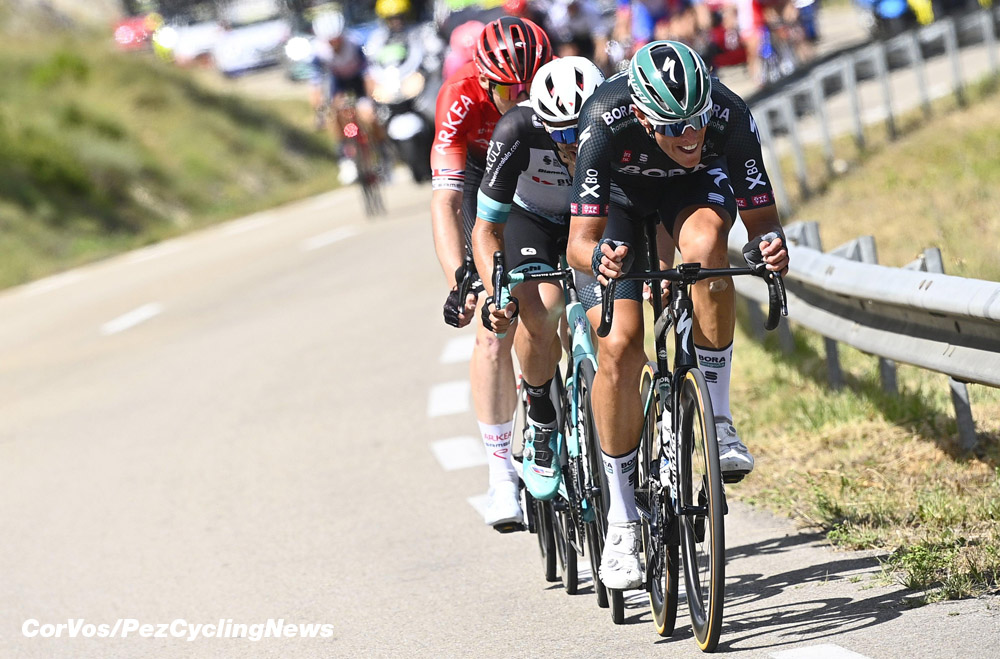 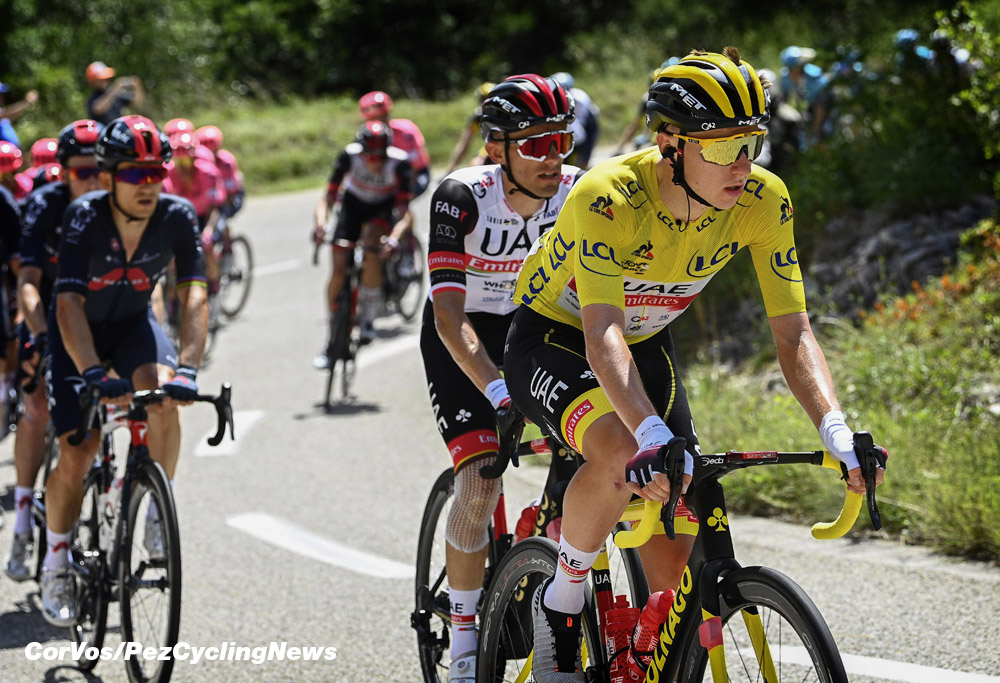 Half a minute after the overjoyed Politt, Erviti won the sprint for second place, ahead of Sweeny. Küng crossed the line in fourth, but he was 2 minutes behind at the finish. Not much later, Mezgec won the sprint for fifth place, ahead of Greipel, Theuns, Van Moer, Alaphilippe and Henao. The classification riders kept a low profile in the final of the stage and eventually crossed the finish line together, more than fifteen minutes after stage winner Politt. 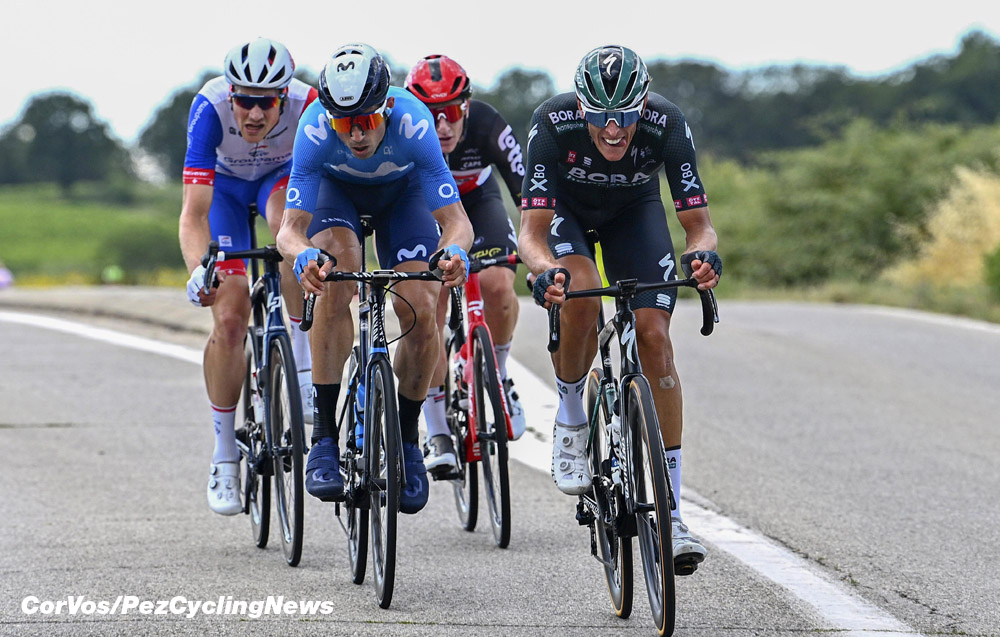 Politt was the strongest in the group 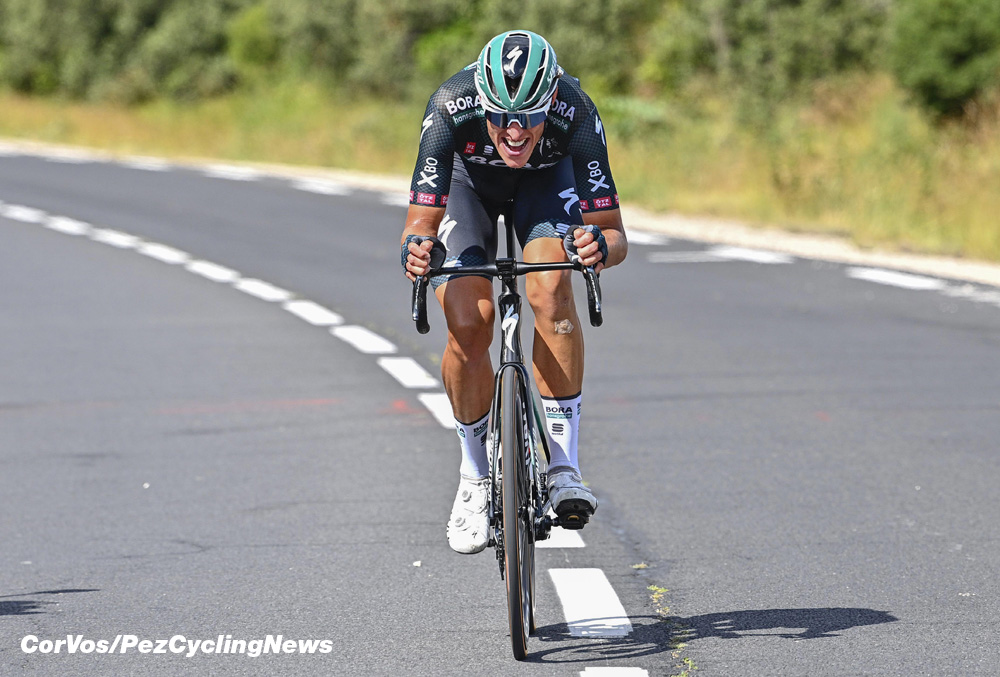 A bit different from his Paris-Roubaix break

At the finish line, there were still two points to earn for the green jersey. Alpecin-Fenix ​​tried to pilot Jasper Philipsen to the line as well as possible, but it was Cavendish who easily won the sprint. 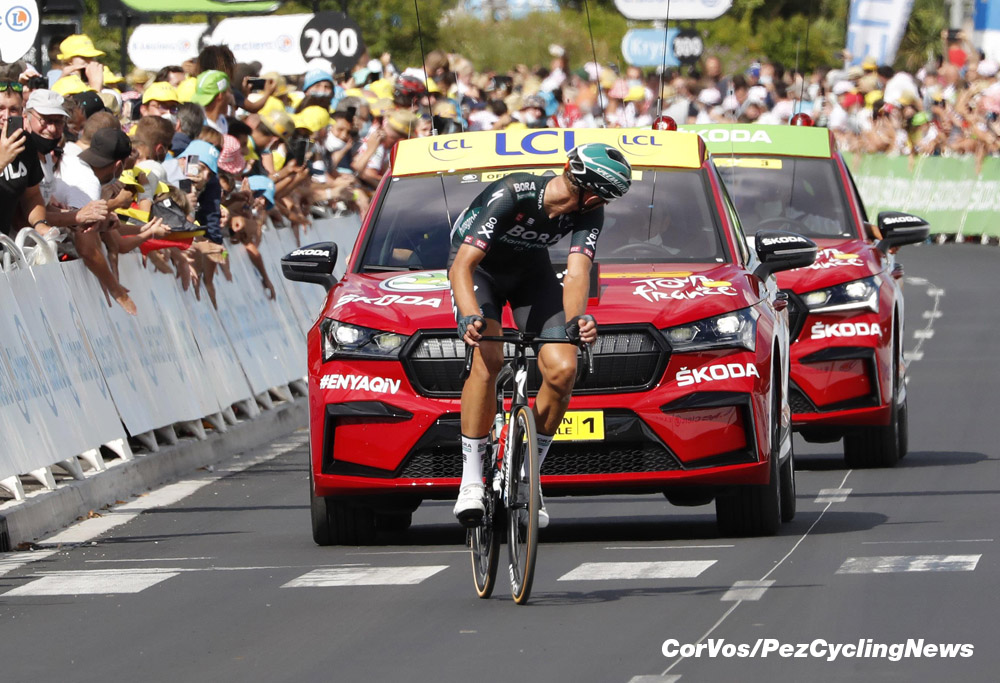 They won’t catch you now 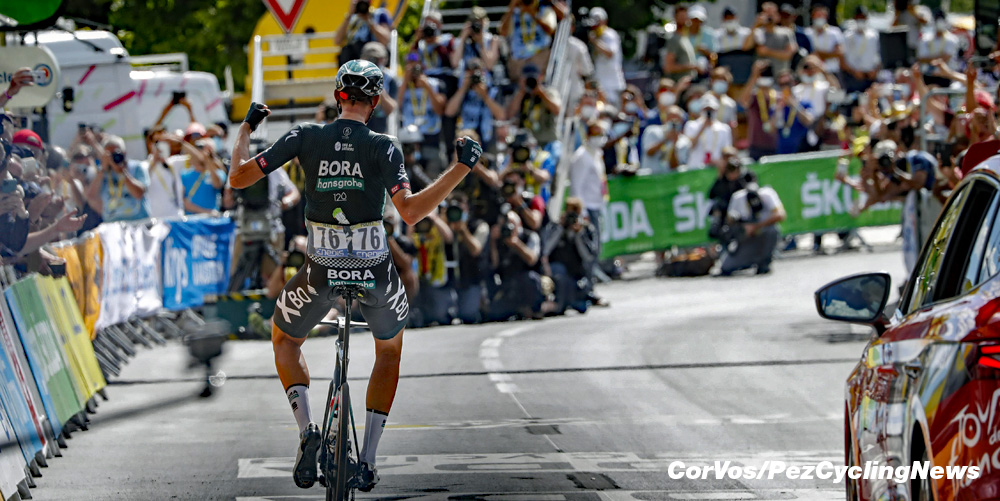 Stage winner, Nils Politt (BORA-hansgrohe): “This is unbelievable. It’s a dream to win a stage at the Tour de France. It was sad that Peter Sagan had to leave. We started the stage directly in the crosswind. I felt better those last few days. There were quite a lot of sprinters in our group, so I had to make the race hard and attack quite early. I made first attack. I gave everything. To finish solo is unbelievable. Cycling is my passion. For my whole family, I spend so much time away from home, it’s the biggest win I could have for them.” 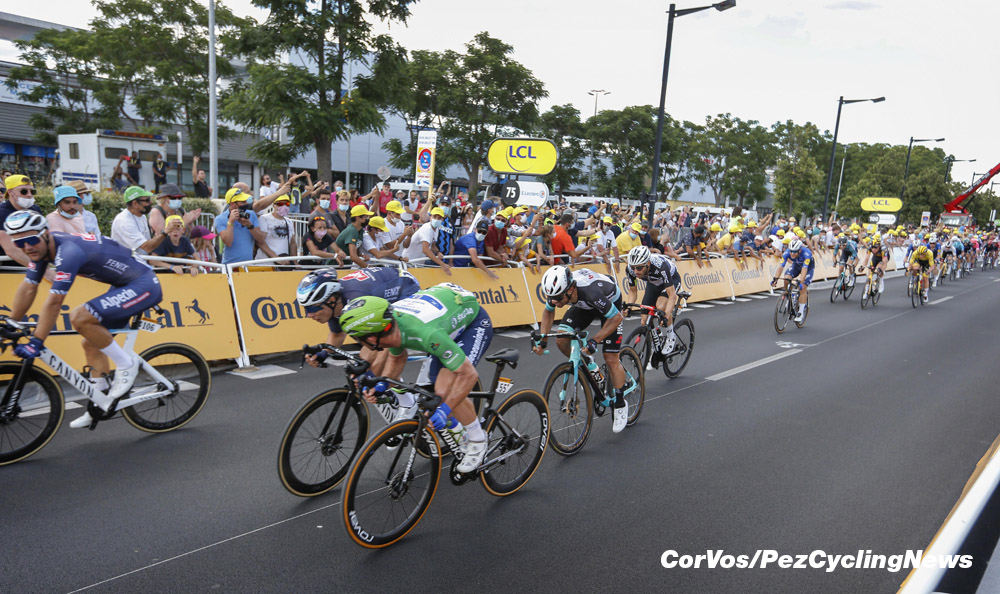 Overall leader, Tadej Pogačar (UAE Team Emirates): “I’m happy with how my legs turned today. I felt pretty good when we were going full gas due to the crosswinds. The first few kilometres were really crazy, but my whole team and me were at the front and feeling well. Matters became more relaxed from them on. We spent some energy at the front, because we pulled to control the bunch, but it’s been fine. I’ll better ride defensively from now on, because we saw yesterday at Mont Ventoux that there are many strong guys in the bunch. Anything can happen in the hot Pyrenees – because it is going to be hot! Anyway, my gap on the second-placed rider in the GC is big enough, so I’m not worried [about losing the Yellow jersey].” 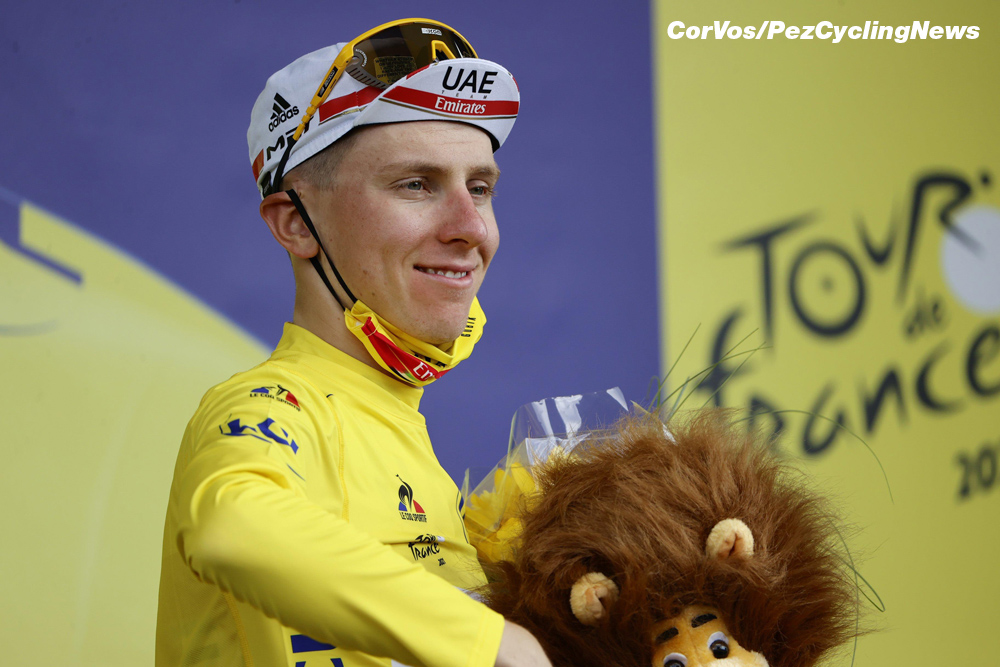