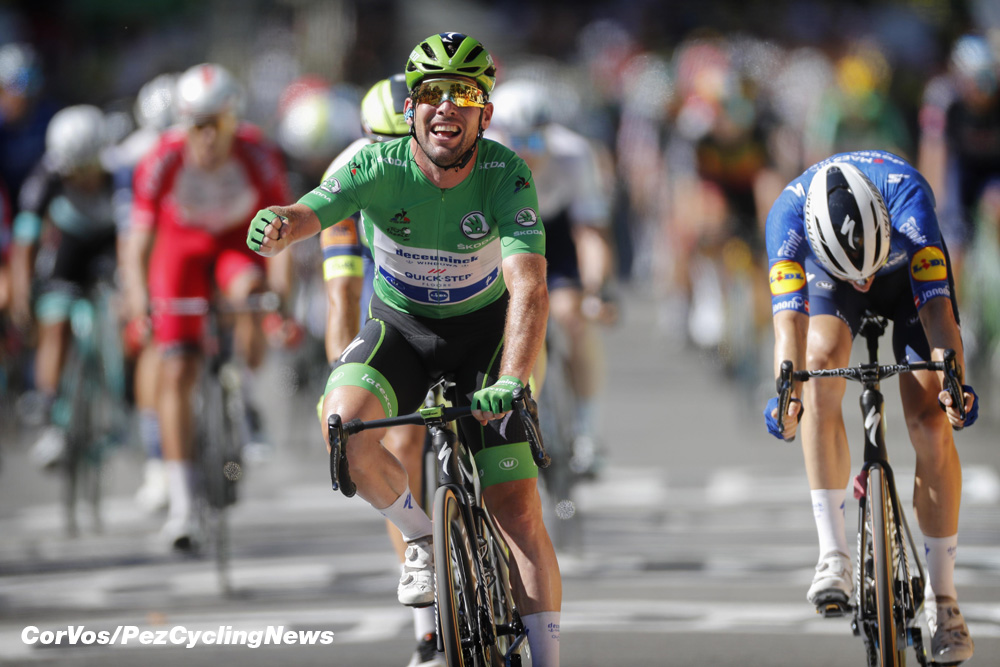 Mark Cavendish wrote history in the thirteenth stage of the Tour de France. In Carcassonne, the Deceuninck – Quick-Step rider was the strongest in the bunch sprint, equaling Eddy Merckx’s 46-year-old record of 34 stage victories in the Tour.

– The final kilometre of Stage 13 and read our full report and pics below:- 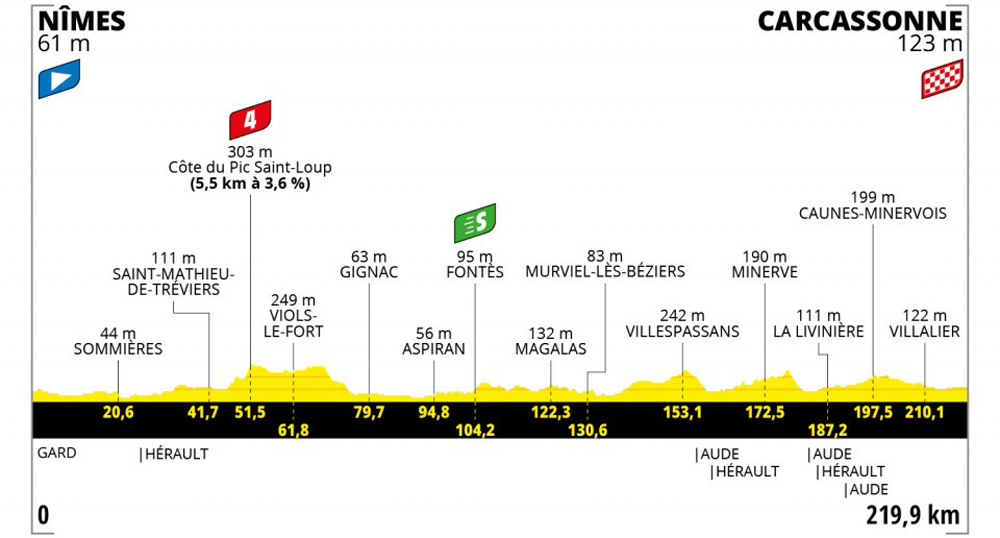 Tour boss Christian Prudhomme describes stage 13: “From the Roman arenas that are considered as the most well preserved in the world to the medieval city part of the UNESCO world heritage, this stage will follow the course of history. It also tells us that despite what the geography seems to suggest, never has a finish by the Carcassonne towers finished with a bunched sprint. Good news for the audacious!” 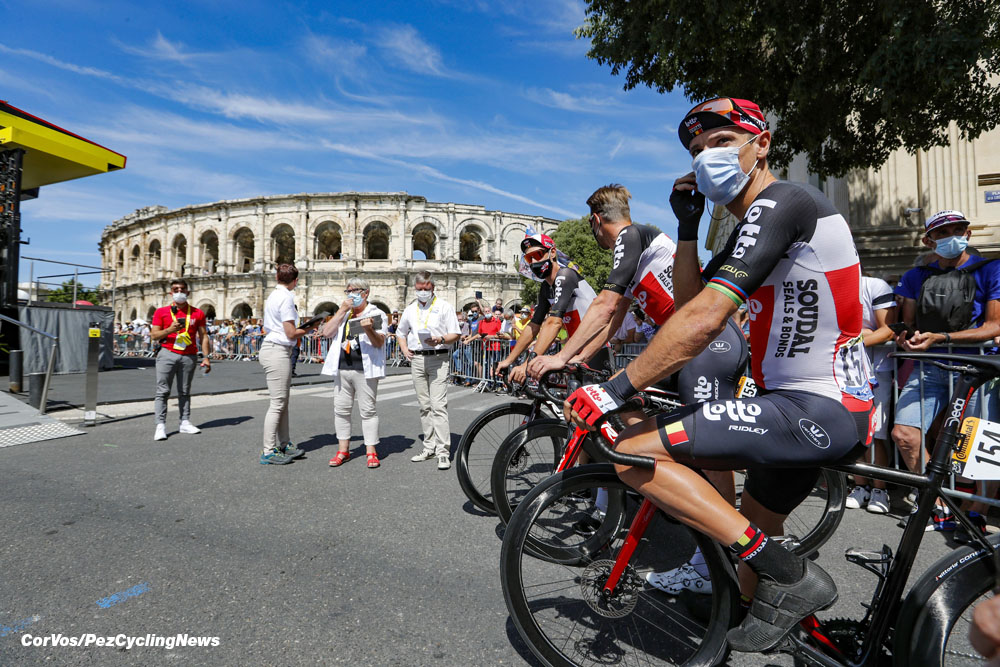 Philippe Gilbert at the stage start in Nîmes 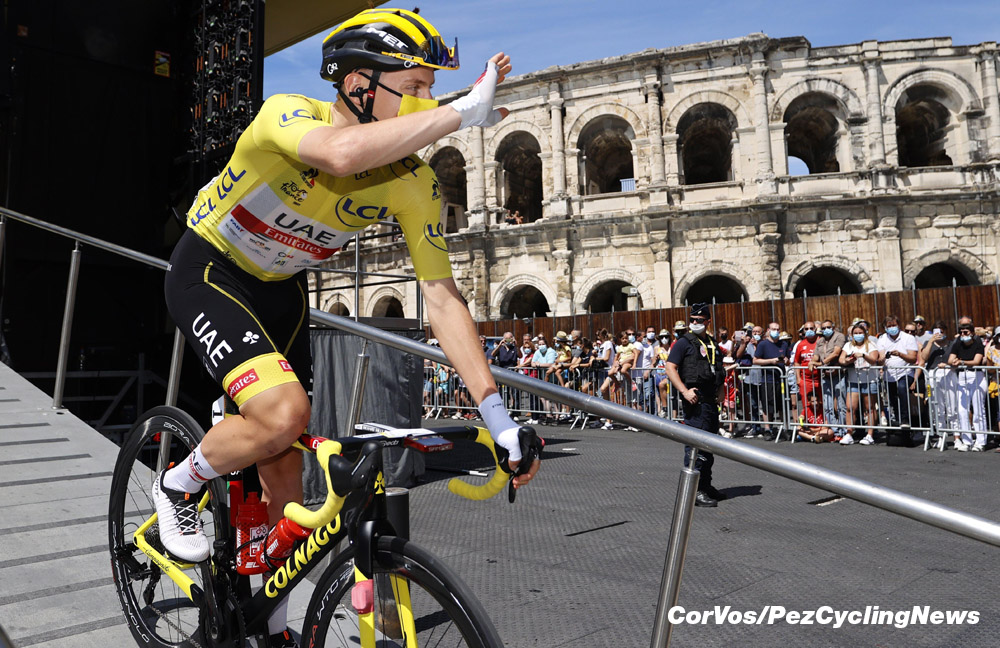 Tadej Pogačar signs on for another day in yellow

On the 93rd birthday of the Eagle of Toledo, Federico Bahamontes, the peloton raced from Nîmes to the fortified city of Carcassonne. It was a stage without significant obstacles, so the sprinters had another chance to fight for the win – although never before has a stage to Carcassonne ended in a bunch sprint. Michael Gogl didn’t start as he had been riding with a knee injury for several days and because the pain was not getting any less, the Qhubeka-NextHash rider had to abandon. 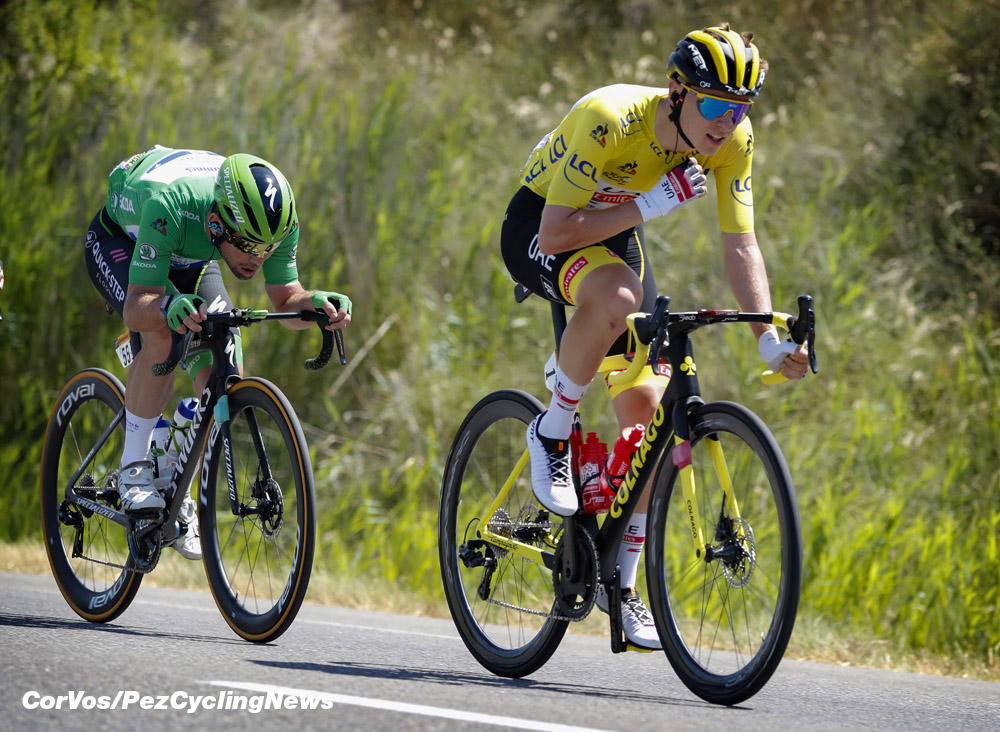 Pogačar is a safe wheel for Cavendish

Oliver Naesen delivered the first of a whole series of attacks. DSM, Lotto Soudal and Qhubeka-NextHash were also looking forward to an early escape and the peloton soon turned into a long ribbon. Mads Pedersen, Max Walscheid and Lorenzo Rota looked to have escaped, but the gap was closed again. After 26 kilometres the break of the day came about. 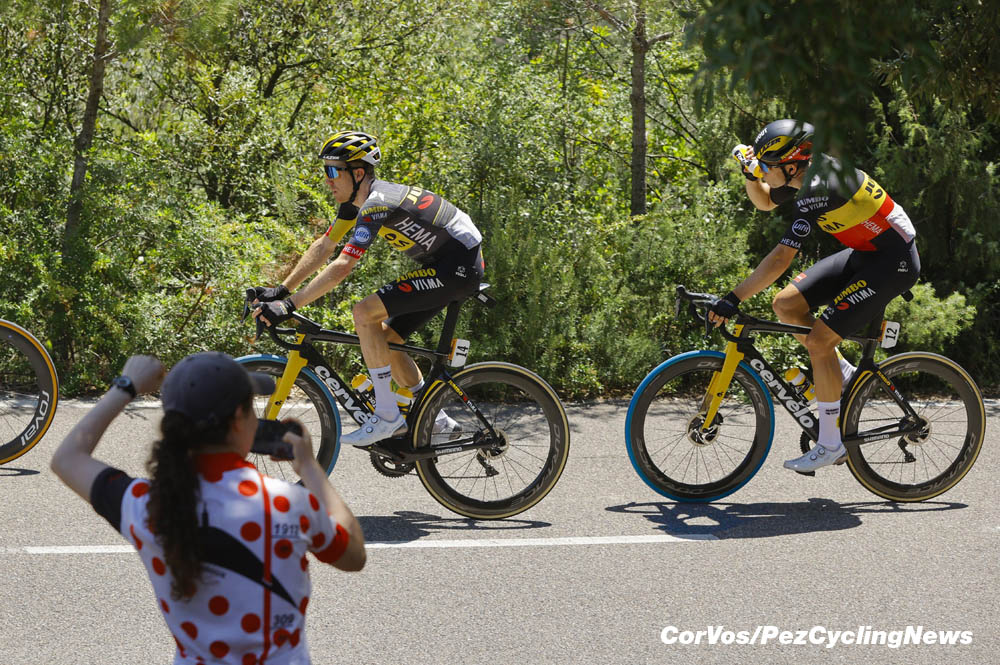 Break or a sprint for Wout van Aert today?

Omer Goldstein (Israel Start-Up Nation), Sean Bennett (Qhubeka-NextHash) and Pierre Latour (TotalEnergies) got together and quickly grabbed a 1 minute lead. Georg Zimmermann of Intermarché-Wanty-Gobert tried to cross to the leading group, also Trek-Segafredo and DSM were also not satisfied with the situation, but Deceuninck – Quick-Step and Alpecin-Fenix ​​pulled the counter-attackers back. The block went up and the three were allowed to go. 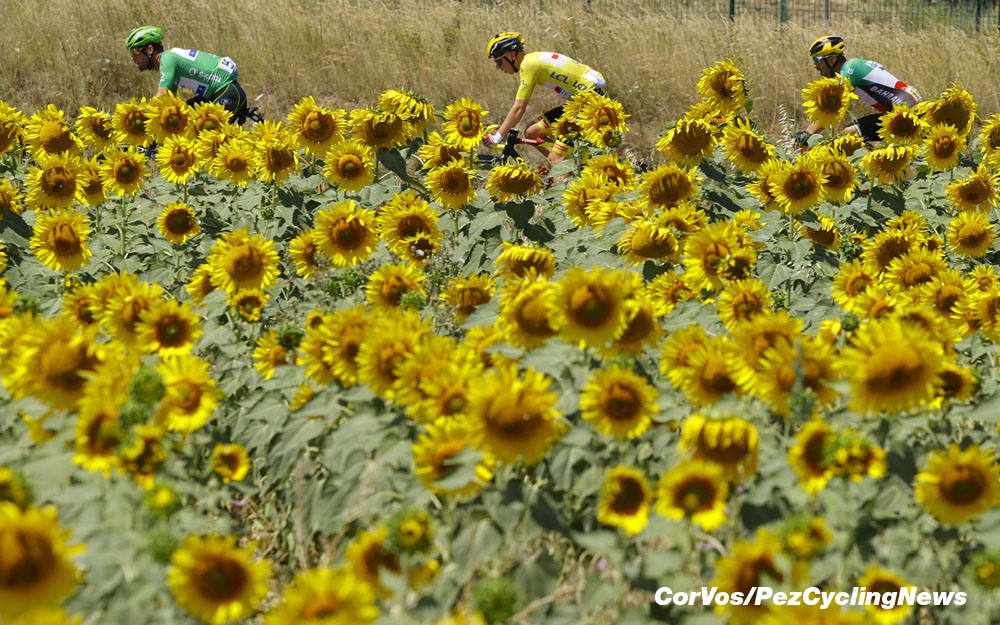 The sunflowers have made a return

Goldstein, Bennett and Latour had 4 minutes under their belt when they started the only climb of the day after 46 kilometres, the Côte du Pic Saint-Loup. Bennett tried to get over the top with a long sprint, but it was Latour who took the only mountain point. Behind, Deceuninck – Quick-Step put Tim Declercq on the front to control the break’s lead, later he got help from Alpecin-Fenix. The teams of Mark Cavendish and Jasper Philipsen had set their sights on a bunch sprint. 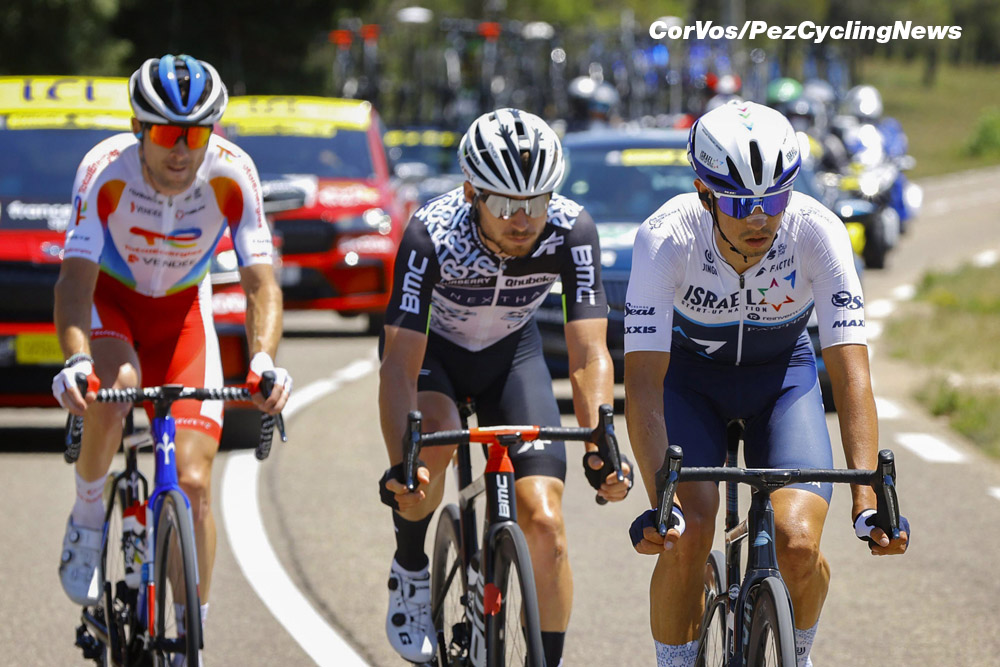 After 115.7 kilometres the intermediate sprint in Fontès loomed for the front riders. Bennett again wanted to make a long sprint, but Goldstein jumped and again the American was put in into second place. Goldstein scored 20 points, Bennett 17. Latour, who did not interfere with the sprint, took 15. In the peloton, Sonny Colbrelli trumped Michael Matthews and Michael Mørkøv for third place. In the battle for the green, Colbrelli and Matthews were again a few points behind Cavendish, who finished eighth. 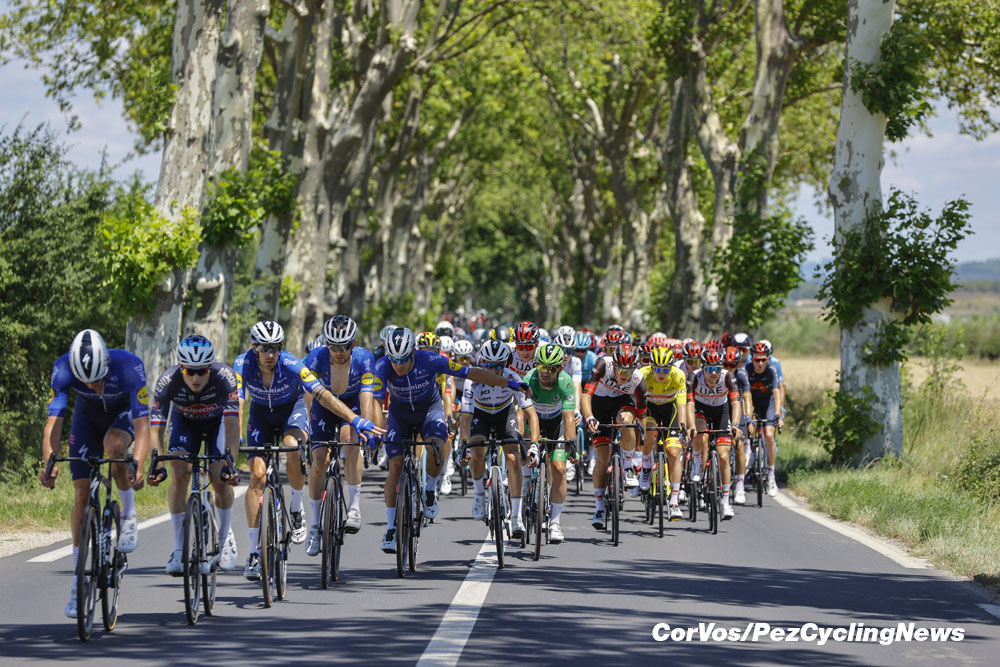 Deceuninck – Quick-Step and Alpecin-Fenix were working for a sprint 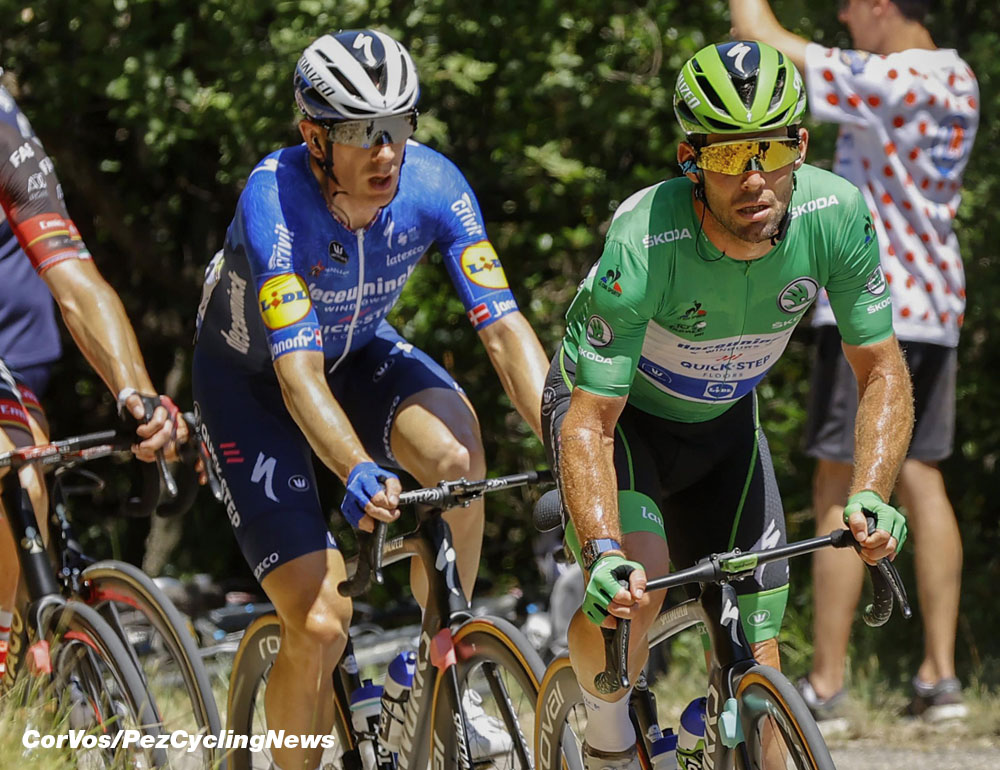 No.34 for Cavendish today? You can read what his lead-out man, Michael Mørkøv had to say on the rest day HERE

Via Magalas, Murviel-lès-Béziers and Cazedarnes the race went to the Aude. Philippe Gilbert attacked out of the pack and Pierre Rolland followed on his wheel. It caused a reaction from the teams of Mark Cavendish and Jasper Philipsen, Deceuninck – Quick-Step and Alpecin-Fenix. More riders tried to avoid a bunch sprint, Alex Aranburu also wanted to get away. But the Spanish rider had a Deceuninck – Quick-Step rider watchdog on his wheel. 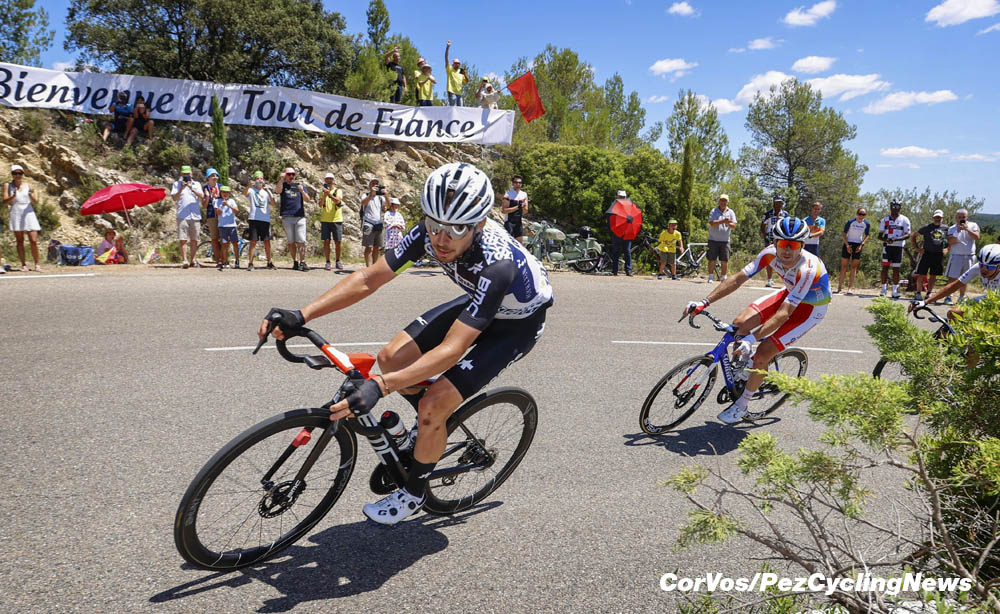 The lead was always around 2 minutes for Omer Goldstein, Sean Bennett and Pierre Latour 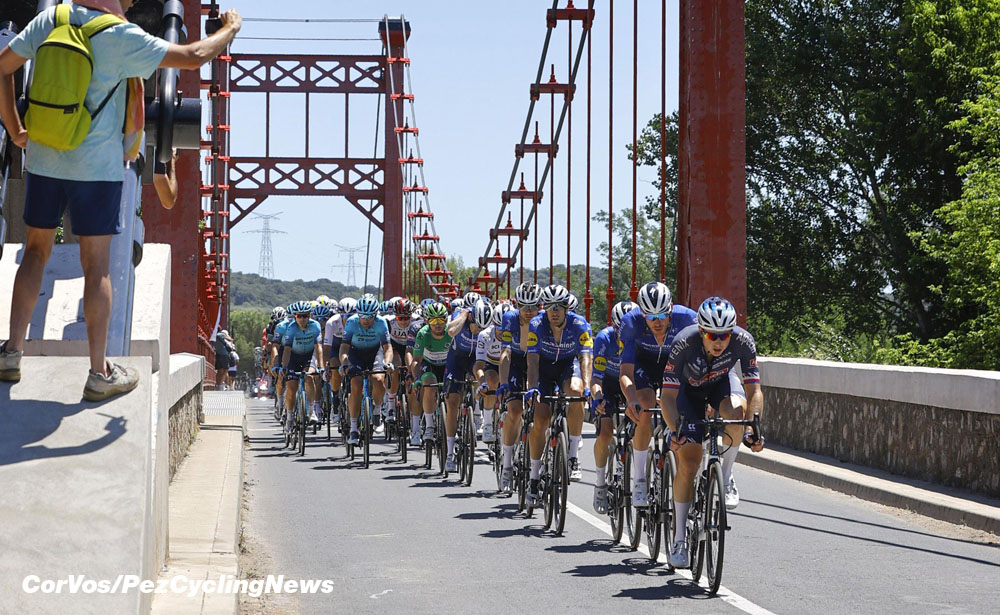 With 65 kilometres to go, there was a big crash in the middle of the peloton involving Declercq, Rafał Majka, Simon Yates, Nacer Bouhanni, Wout Poels and Sergio Higuita. Riders ended up in the bushes and down a banking. Almost everyone was able continue; only Roger Kluge and later Simon Yates and Lucas Hamilton had to retire. Meanwhile, the frontrunners were no longer in agreement; Bennett attacked and was then dropped by Goldstein and Latour. Goldstein and Latour were caught at 52 kilometres from the finish. 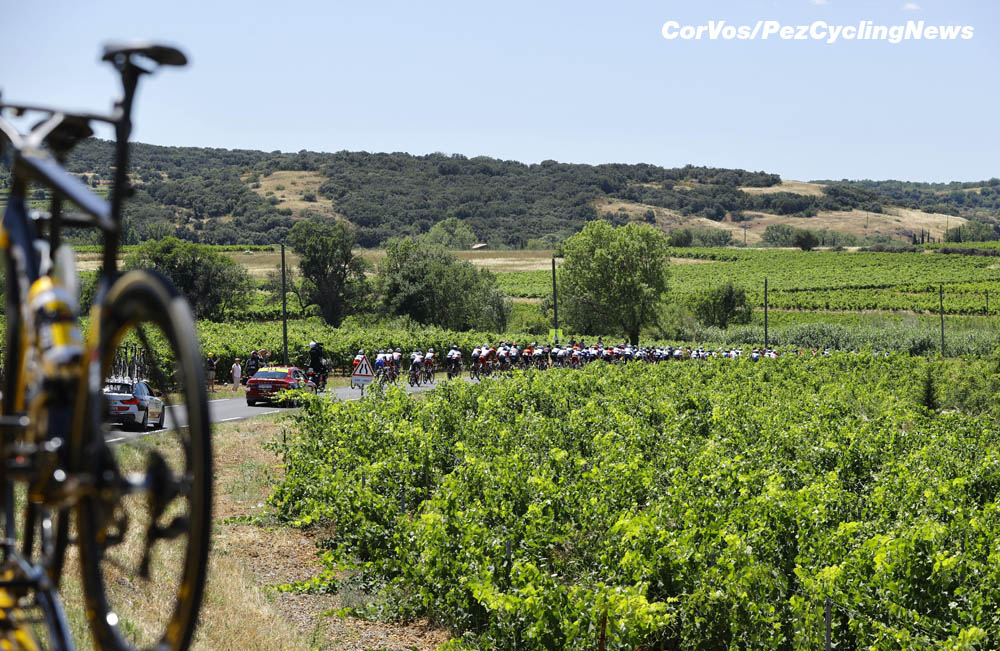 Nice wine from this area 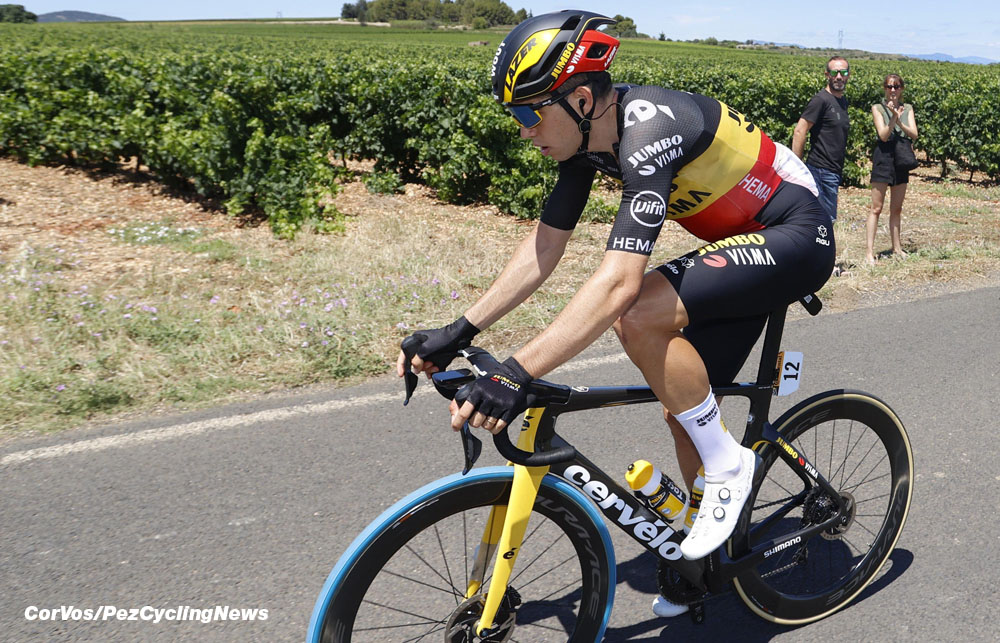 Will Wout van Aert have his sprinting legs on today?

Quentin Pacher attacked with 45 kilometres to go. The Frenchman soon had half a minute, while the peloton slowed down a bit so that the crashed riders could return. 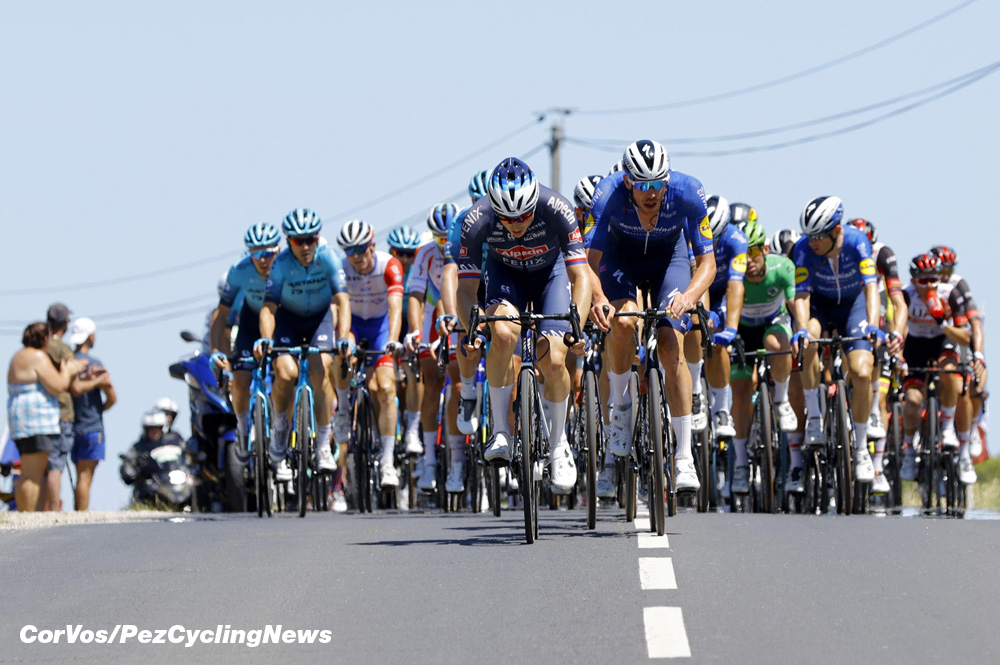 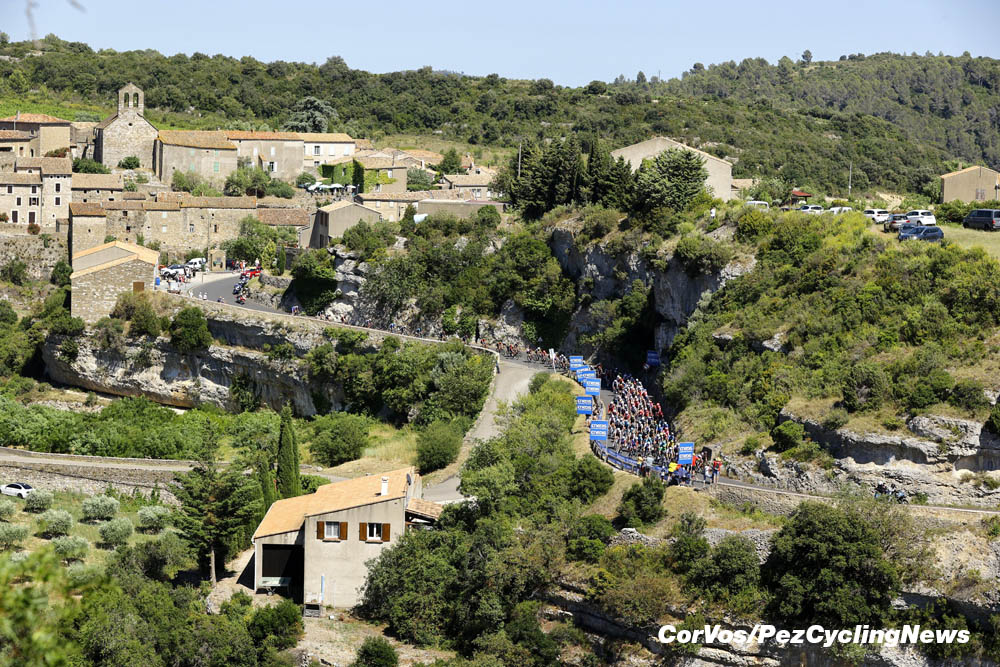 It was all together for the run in to Carcassonne

Pacher’s attack would not last. He was caught with 19 kilometres to go. Then Richard Carapaz’s squad, INEOS Grenadiers, tried to pull the race apart, but the peloton didn’t split. At 10 kilometres from the finish they tried again, but again everything stayed together. After that the teams of the GC riders took their leaders into the safe last kilometres. 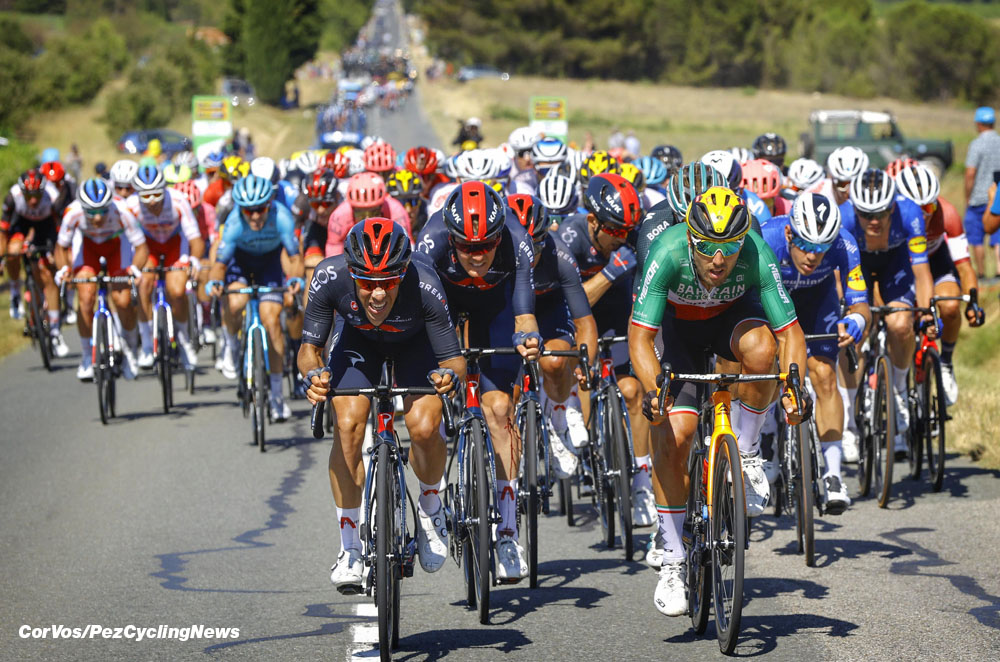 The GC team led into town

It was then up to the lead-out trains of the sprinters. In the final kilometre Davide Ballerini pushed on hard, forcing the competition to close the gap. It was all in favour of Mark Cavendish, who took to sprint for his 34th stage win. The British sprinter completed the preparatory work of his team perfectly and just finished ahead of his teammate Michael Mørkøv and Jasper Philipsen. Iván García was fourth, Danny van Poppel fifth. With his victory, ‘Cav’ equaled the record number of stage victories in the Tour of Eddy Merckx. 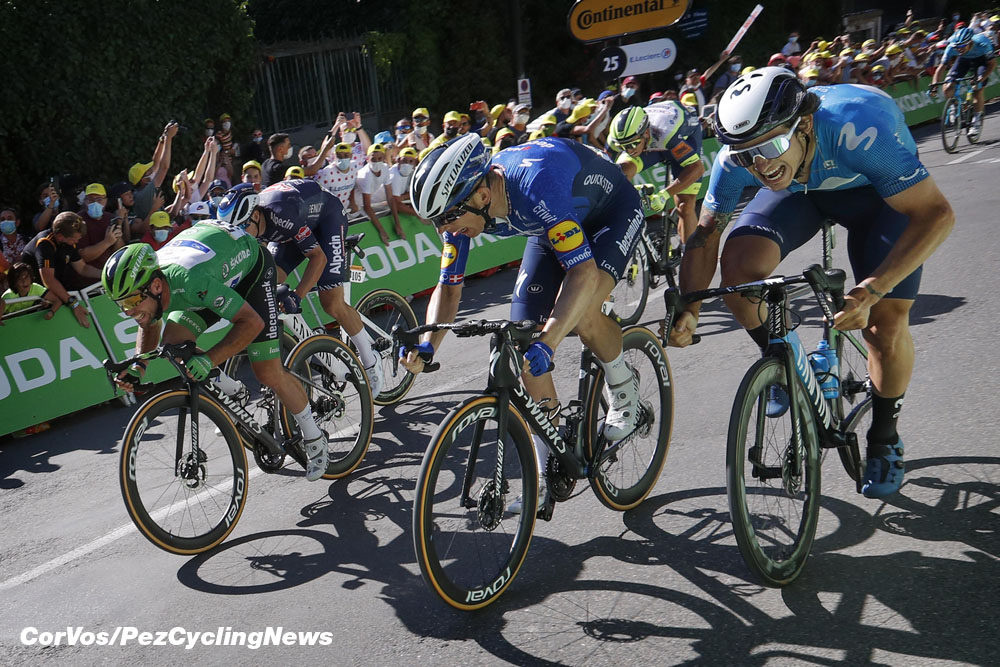 It was a close finish

Stage winner and points leader, Mark Cavendish (Deceuninck – Quick-Step): “What a day. I am so dead after having raced 220 kilometres in that heat, in that wind – and what a finish! I was so on the limit in the end, but I had to sprint because of how much the guys had worked for me. The finish line was slightly uphill. [Iván García] Cortina went and I hoped for [Michael] Mørkøv to bring him back, because I had lost some ground on that last right-hand turn. During the sprint, I was a bit worried because the commissaries had warned me I had headbutt Bouhanni on one of the first stages, so I was trying not to use my head and not to lean towards anyone during the sprint. For me, this is just another stage win on the Tour de France. It feels the same as the first one. I still don’t realise this is a special one because of the record. Just a kid’s dream comes true after a lot of hard work. If one of my victories can inspire ten children to take on cycling and maybe race the Tour de France on the future, that’s what will matter the most to me.” 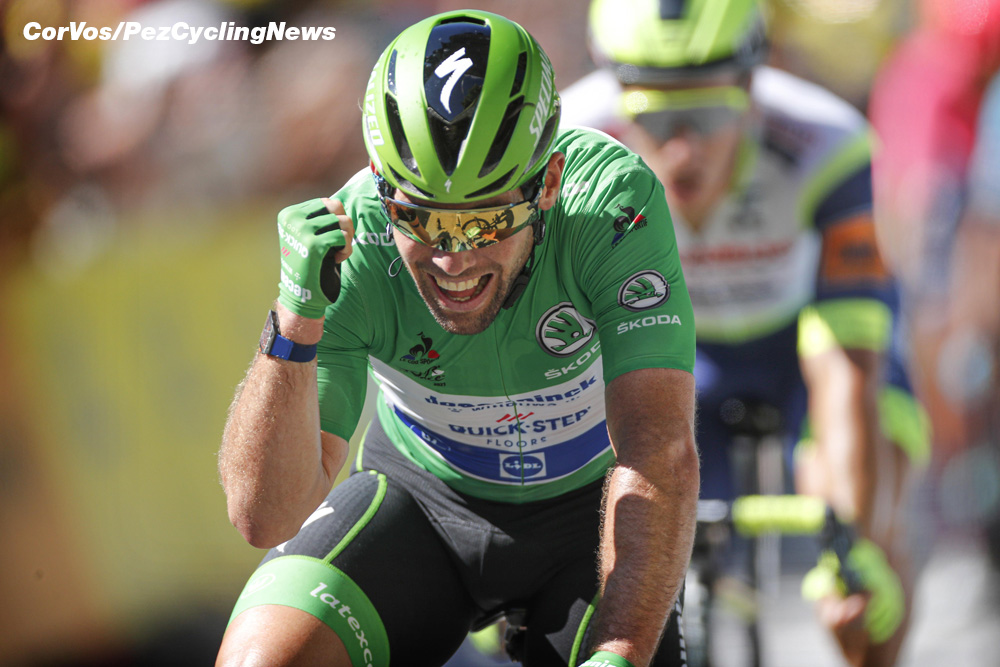 Overall leader, Tadej Pogacar (UAE Team Emirates): “Today’s was a super hard, super long stage. At first it was a bit boring, and then it got hectic, with a lot of stuff going on. I’m happy it’s over. My teammate Rafal Majka crashed. We will see how he is once in the hotel. I hope he will be alright tomorrow and ready to take the start. Tomorrow it’s going to be a hard day too. Many things can happen and it won’t be easy. Maybe a big breakaway will go from the first kilometres. Anyway, we are ready to tackle the Pyrenees and defend the yellow jersey.” 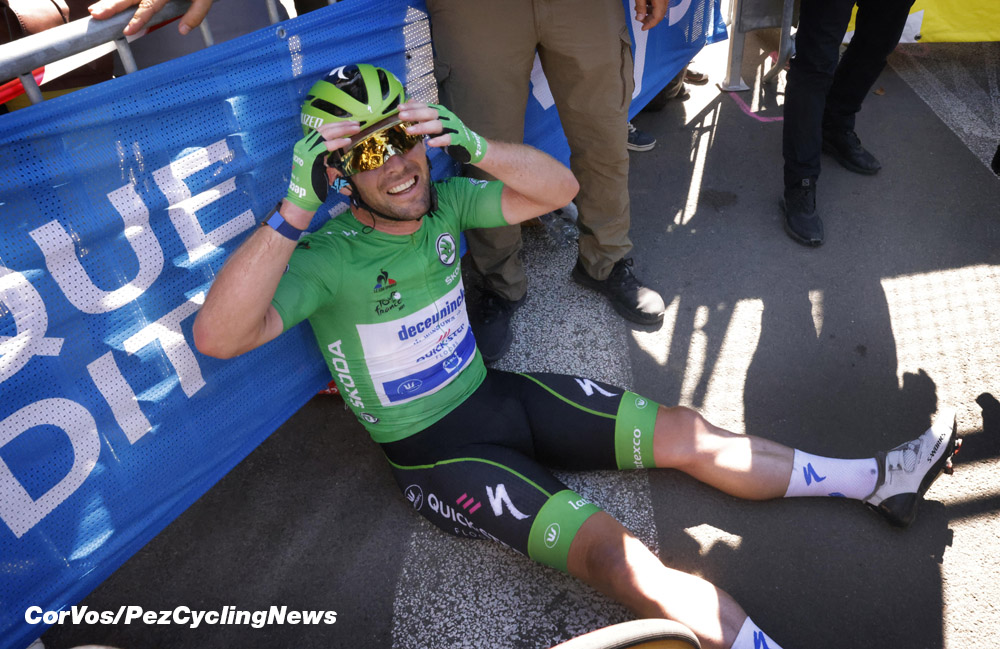 The end of a hard won stage