Stage Report: Two-time Austrian national champion, BORA-hansgrohe’s Patrick Konrad, soloed the final kilometres for his first Tour stage win and first pro win outside of Austria. The peloton was on a second rest day and was 14 minutes down. No change on the GC. 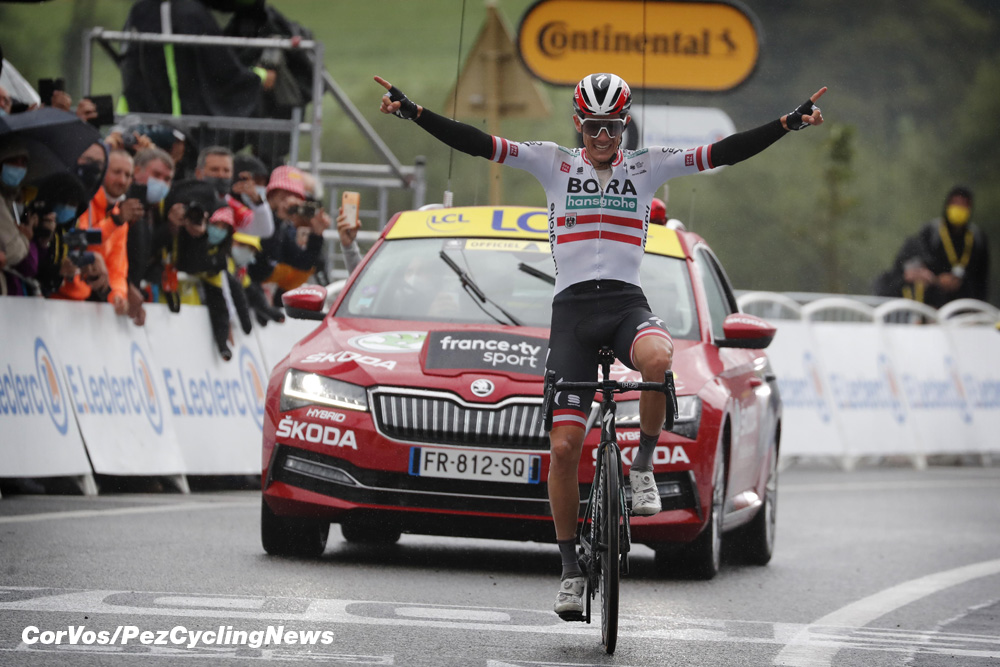 – The final kilometre of Stage 16 and read our full report and pics below:-

Patrick Konrad won the sixteenth stage of the Tour de France solo. The Austrian champion of BORA-hansgrohe was the best from an early break after a transition stage of 169 kilometres through the Pyrenees, finishing in Saint-Gaudens. The peloton, led by the team of yellow jersey Tadej Pogačar, gave the attackers plenty of room to fight for the stage victory. 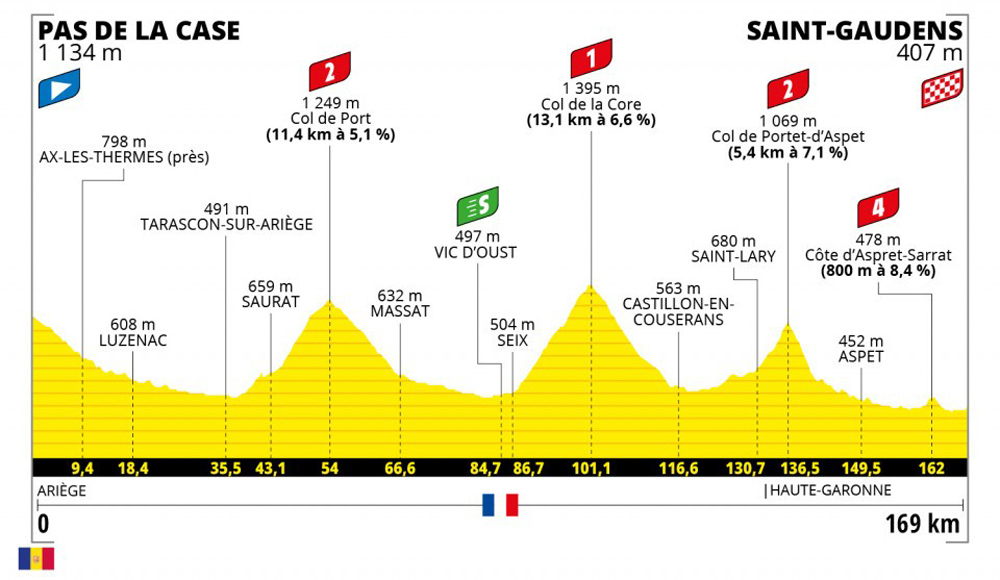 Tour boss Christian Prudhomme describes stage 15: “The Yellow Jersey contenders could enjoy a moment of truce and the hilly stage profile seems to favour breakaway riders who will still be fresh enough in this third week of racing. They will have to shake up the race if they don’t want to miss out on one of the last clear opportunities of shining.” 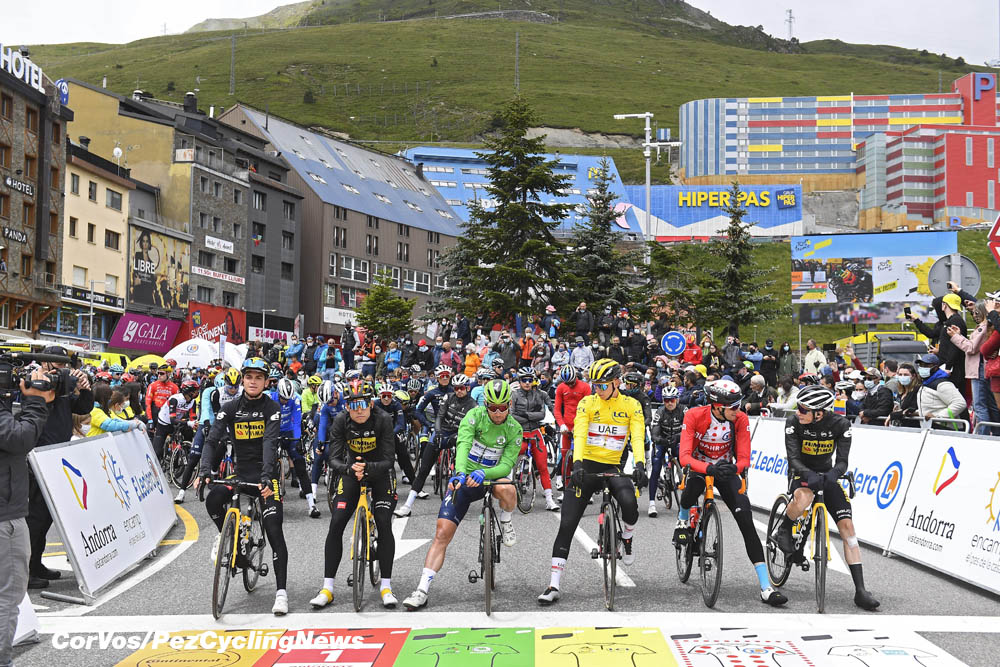 All rested after Monday?

The first attack of the day was from Kasper Asgreen. In the wet, long and fast opening descent to the foot of the Col de Port, the Danish rider took a minute and a half on the peloton. With that lead he started the 2nd Cat climb (11.4km at 5.1%). 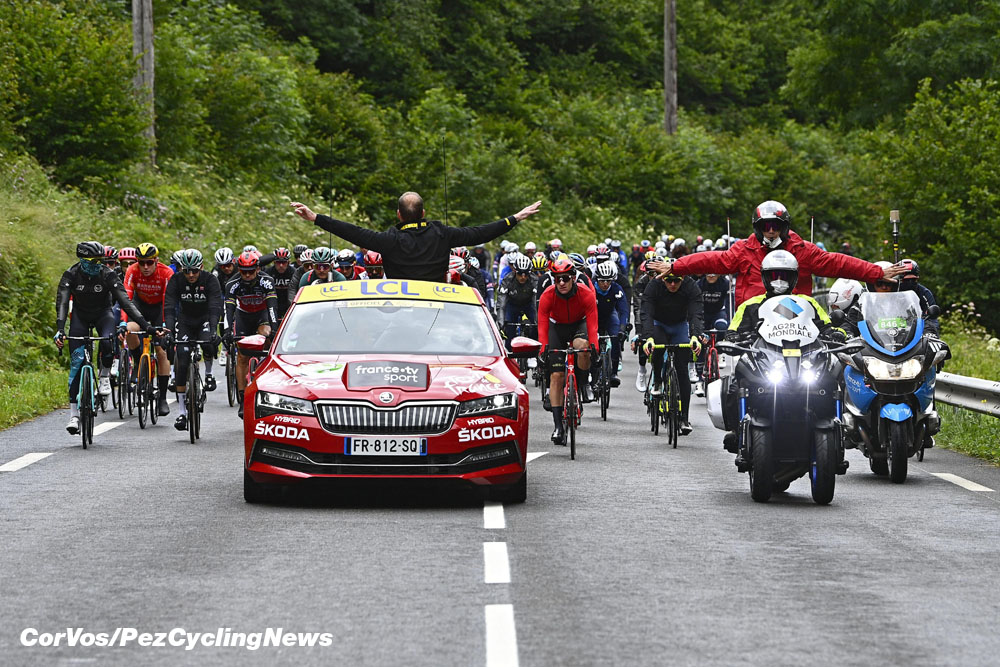 Behind him came big attacks for riders wanting to be in the escape of the day. Michal Kwiatkowski and Mattia Cattaneo managed to make the jump, but the action didn’t stop behind. On the descent of the Col de Port there was a regrouping between the leading three and the considerably thinned out peloton. 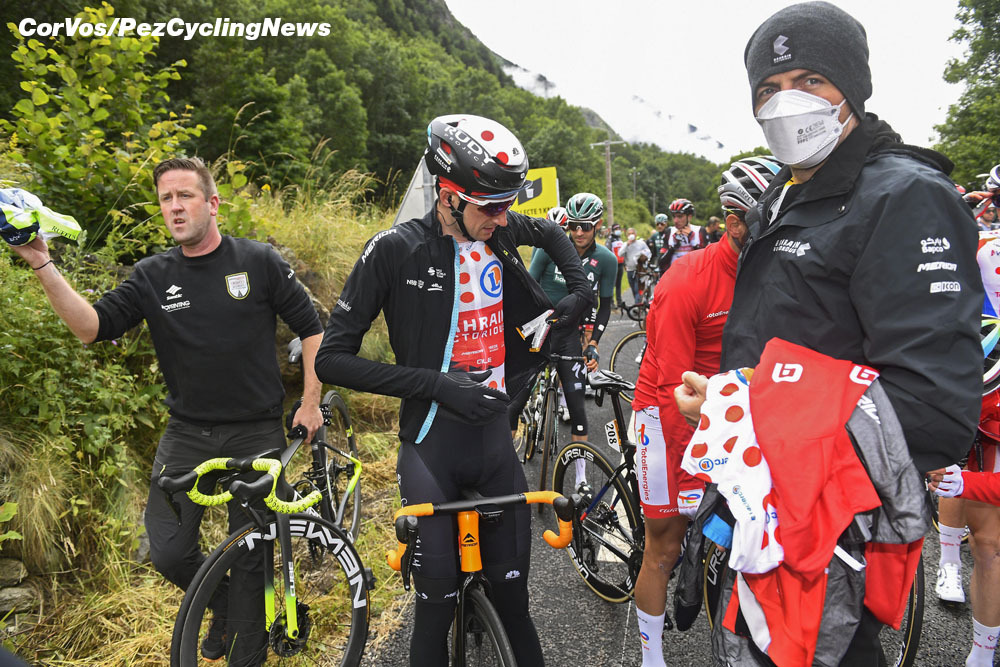 Too cold on the down hill start 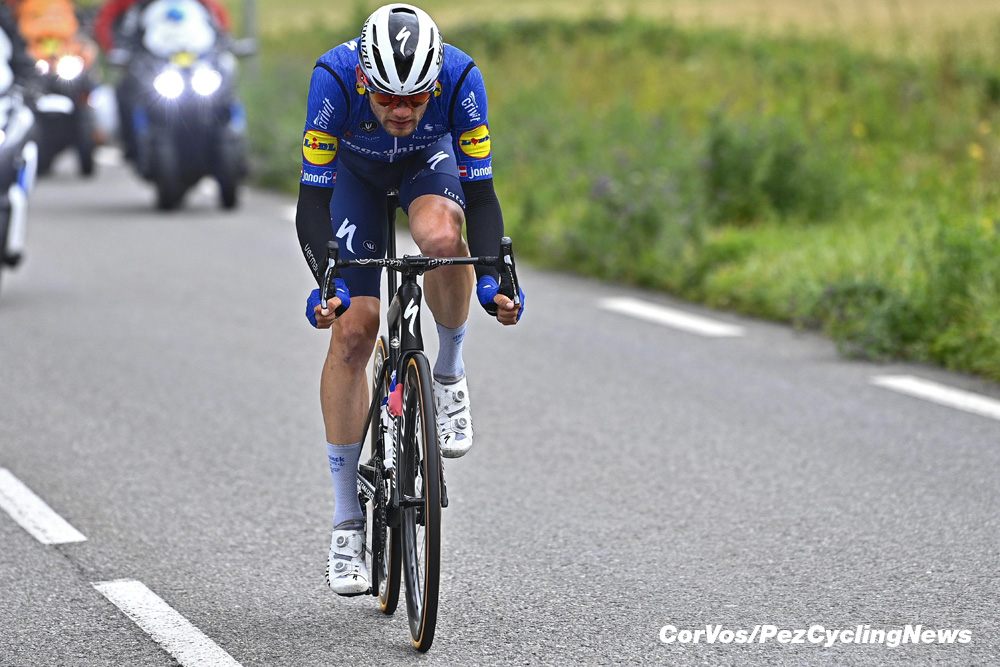 UAE Team Emirates thought those skirmishes were fine and slowed down in the peloton, so that the dropped riders could also rejoin. The leading group gained more than 7 minutes. At the Col de la Core (13.1km at 6.6%), Bakelants, Doubay and Juul Jensen were supported by Austrian champion Konrad, who made the jump and took the most mountain points. 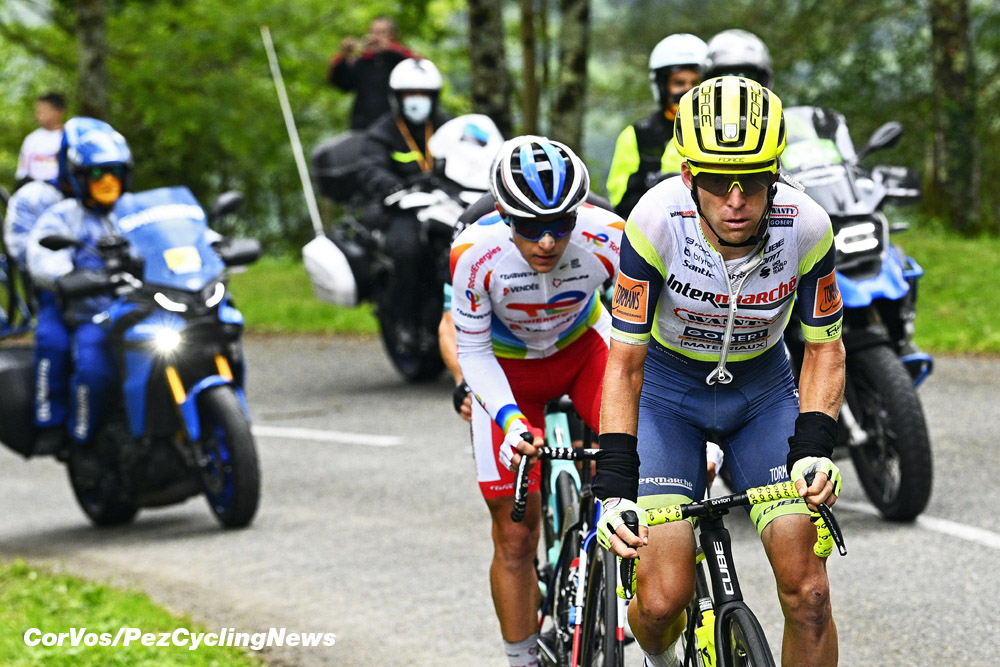 At the top of la Core the difference to the first pursuers was manageable, but the difference grew again. The situation in the peloton saw EF Education-Nippo take over the work from the team of Pogačar, but that didn’t last long. The difference then grew to over 10 minutes. 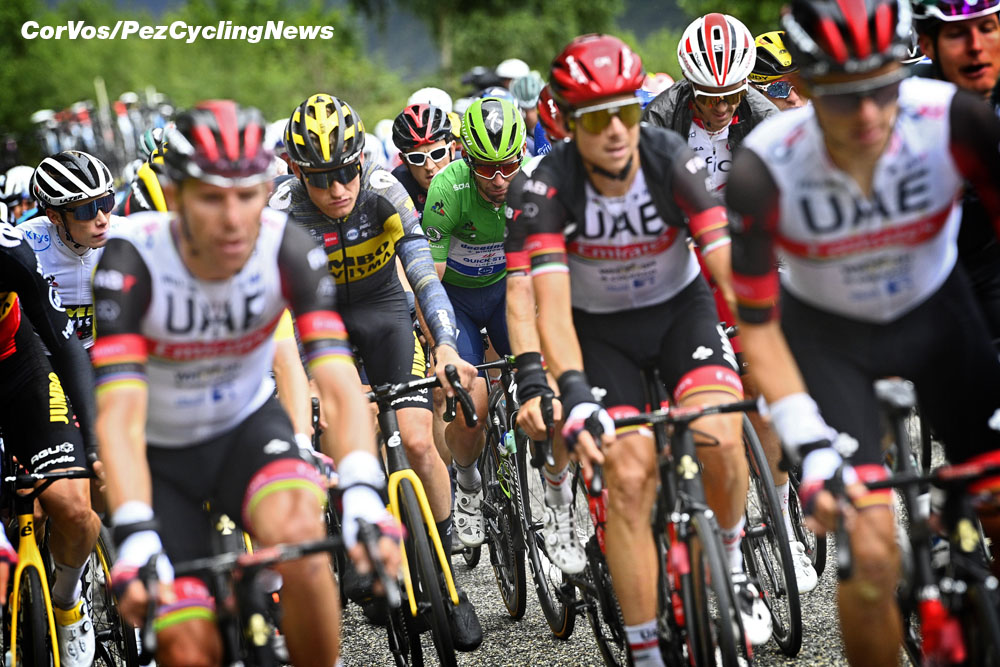 Bakelants, Doubey and Konrad, who had dropped Juul Jensen, started the final 37 kilometres with a lead of more than 20 seconds at the Col de Portet d’Aspet (5.4km at 7.1%). The BORA-hansgrohe climber attacked, leaving behind his fellow escapees and driving away from the group of pursuers. 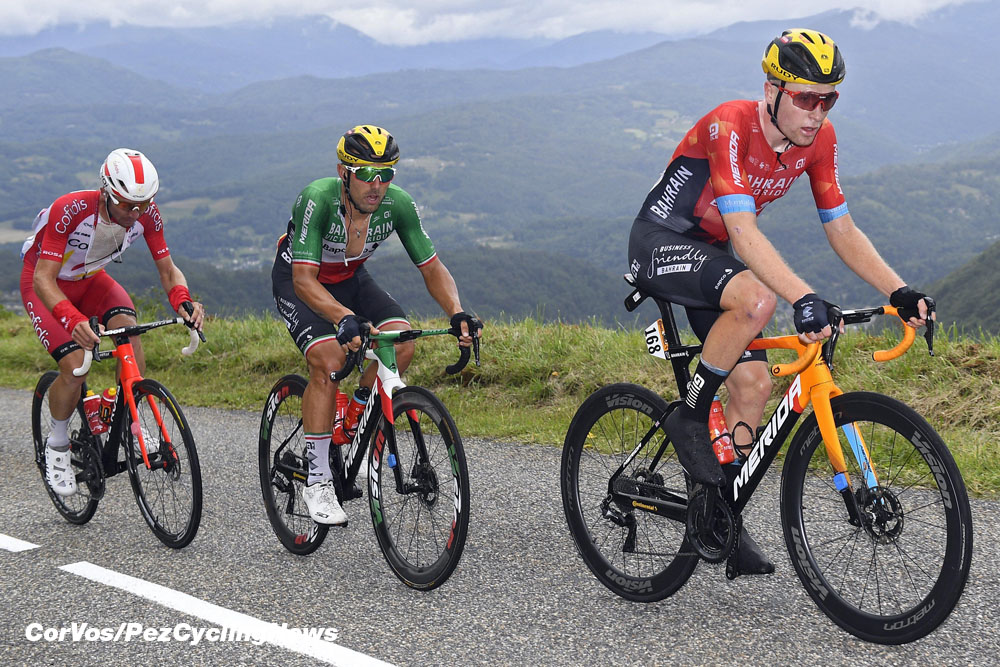 Gaudu and Colbrelli turned out to have the best climber’s legs; the two crossed the top of the Portet d’Aspet just 24 seconds behind Konrad. The group of Matthews followed at 47 seconds before the dangerous and rain-soaked descent, which will forever be linked to the fall of Fabio Casartelli. Konrad was able to extend his lead over Gaudu and Colbrelli towards 45 seconds on the downhill. 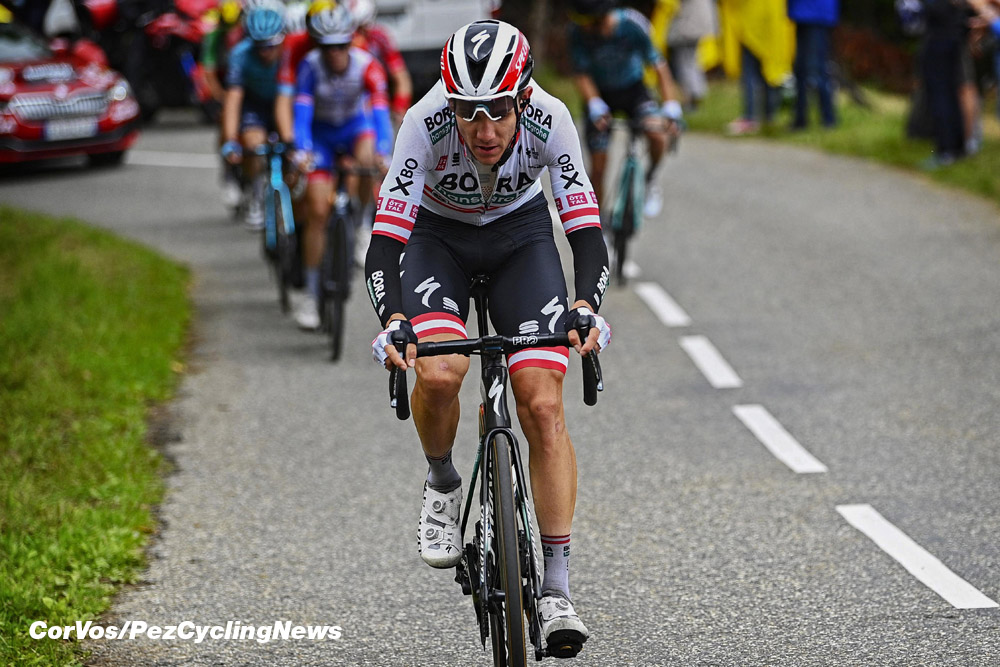 The co-operation of the Frenchman and the Italian was not great, and they were swallowed by the group of Matthews 15 kilometres from the finish. Skujins, Périchon, Aranburu, Bakelants, Rota and Bonnamour were also still there. Konrad went into the finalé with a 1 minute lead. In the final there was also the Côte d’Aspret-Sarrat (800 meters at 8.4%), but he crossed it effortlessly. 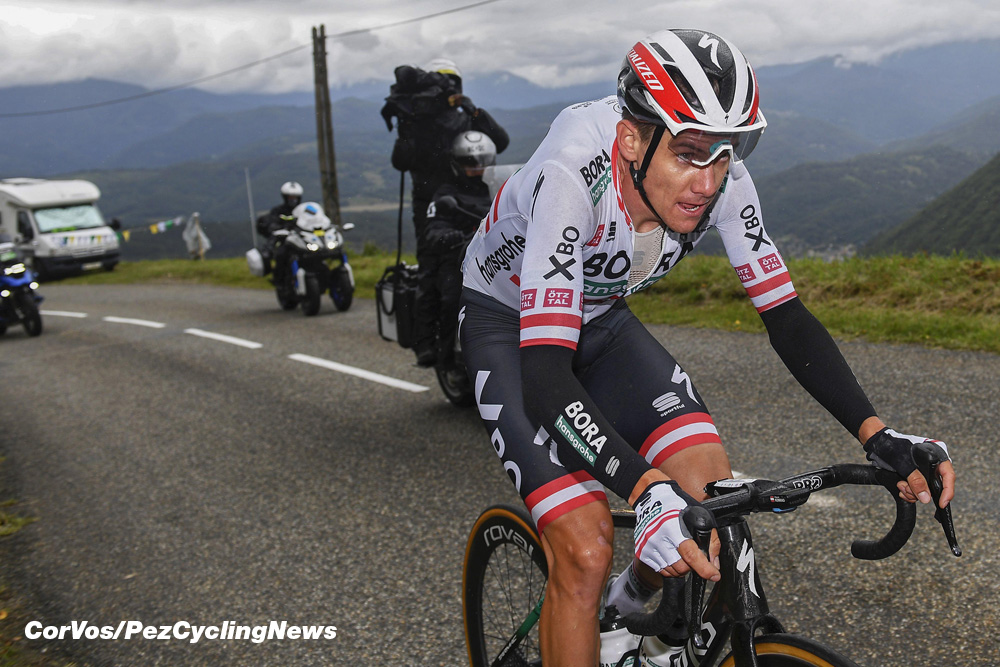 Konrad looked good for the win

David Gaudu tried behind to drop his fellow escapees on the climb. Only Skujins, Colbrelli, Matthews, Bakelants and Bonnamour could follow. The difference to Konrad also fell under a minute on the dangerous and narrow final towards Saint-Gaudens, but the champion of Austria kept a good pace. His stage victory was not in danger; the second for BORA-hansgrohe of this Tour after Nils Politt’s win. 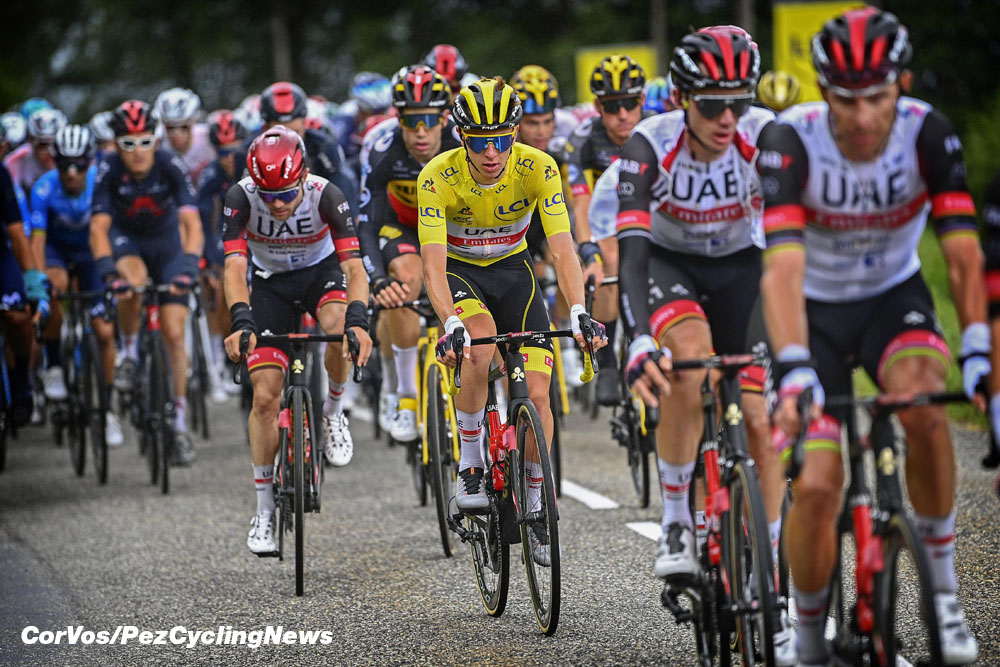 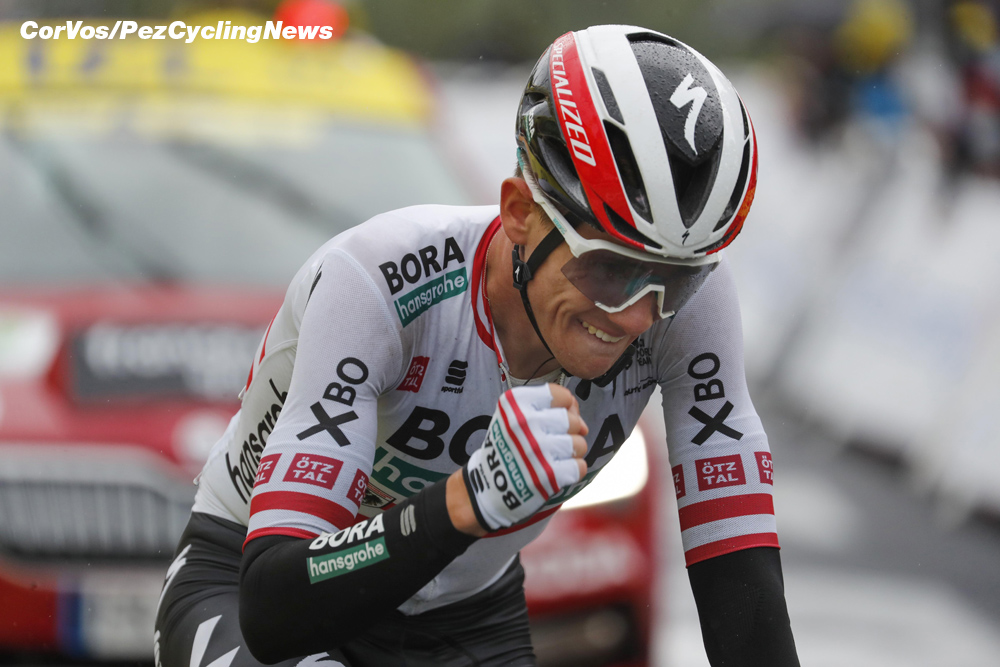 Périchon had pulled away from the group of pursuers, but he lost energy in the last 500 metres, which were uphill. Just before the finish, the Frenchman was passed by Sonny Colbrelli (second) and Michael Matthews (third), who came a little closer to Mark Cavendish in the battle for the green jersey. 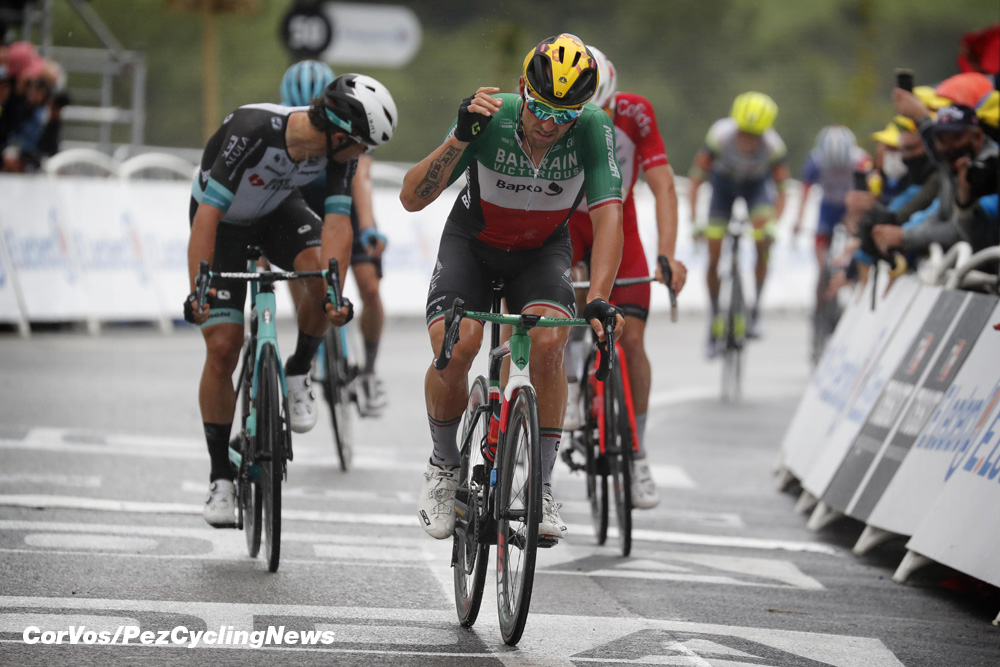 More green jersey points for colbrelli, but no stage win

Fourteen minutes after Konrad, the peloton seemed to be riding calmly to the finish, until Guillaume Martin attacked on the Côte d’Aspret-Sarrat. That was countered by Wout van Aert. At the top, Jumbo-Visma saw that a small group had separated themselves. Van Aert and Sepp Kuss took the lead for Jonas Vingegaard, but afterwards it turned out that all the top-10 riders were in attendance. The group sprint didn’t cause any significant differences. 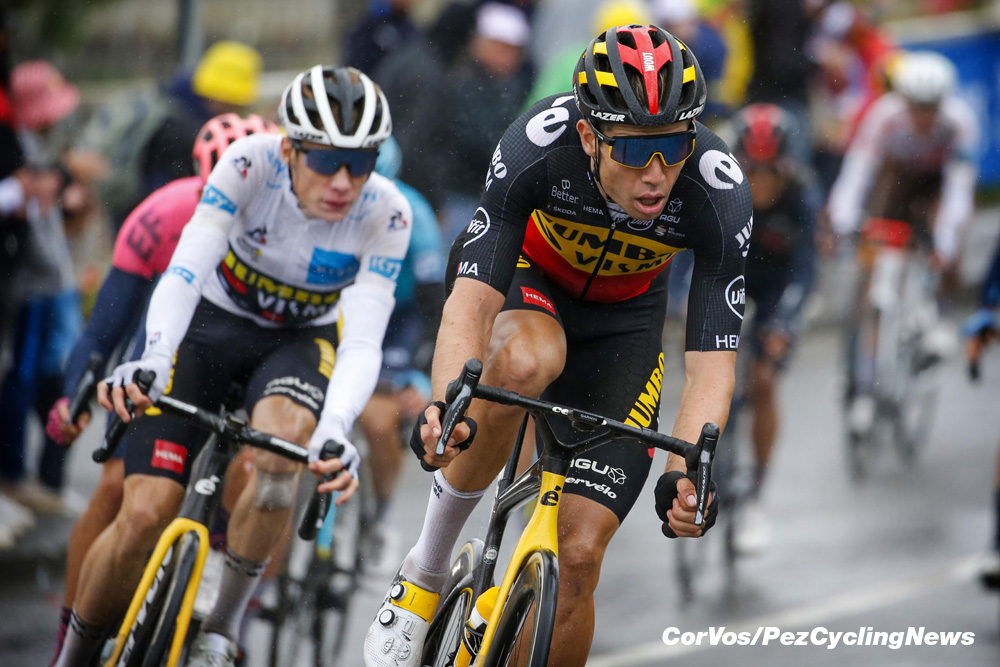 Jumbo-Visma tried a late move, for nothing

Stage winner, Patrick Konrad (BORA-hansgrohe): “This is my first win in the WorldTour and it comes at the world’s biggest cycling race. I’m speechless. This one is for my family, for my friends, for all my believers, for Bora-Hansgrohe. The team always gave me the trust. I fought for this win. It comes at the right moment as I’m in the Austrian champion’s jersey. I already made three breakaways at the Tour. Every time I was waiting for the finale and it was not always the best decision. I saw it when Matej Mohoric went early. The same happened with Bauke Mollema. I told myself that if it happened one more time, I’d be the guy to try early. I’m happy I had the legs to make it to the finish. The last kilometre was uphill and it was painful again but I had some time to celebrate. I believed in my win with 500 metres. I’m super happy. I can enjoy this moment.” 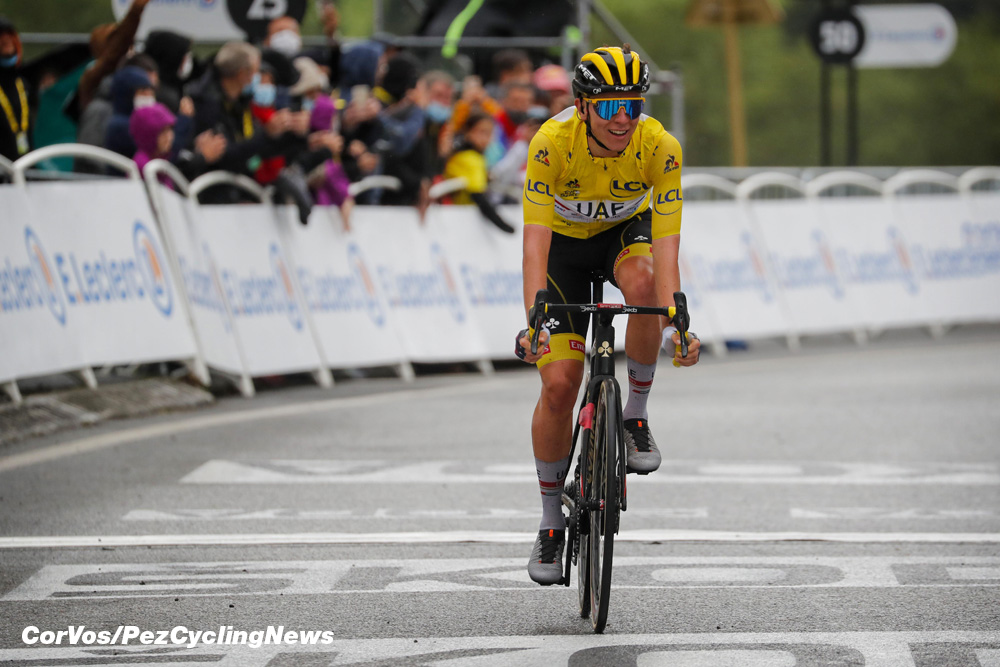 Easy day for the yellow jersey

Overall leader, Tadej Pogacar (UAE Team Emirates): “It was a really hard day. We started with cold weather and a big group tried to break away. The first two hours were full-gas. Then we manage to ease up a bit, but afterwards the last kilometres were quite fast again. Actually, I don’t know what we were doing in that final acceleration. I was just following wheels. Anyway, it was a good warm-up for tomorrow. Tomorrow it’s the hardest day of the Tour, so let’s see. I did a reckon of [the routes of] tomorrow and the day after, so I know the climbs. It would be better if I hadn’t seen them! [laughs] I’m not worried about the climbs, but I know it will be a very hard day.” 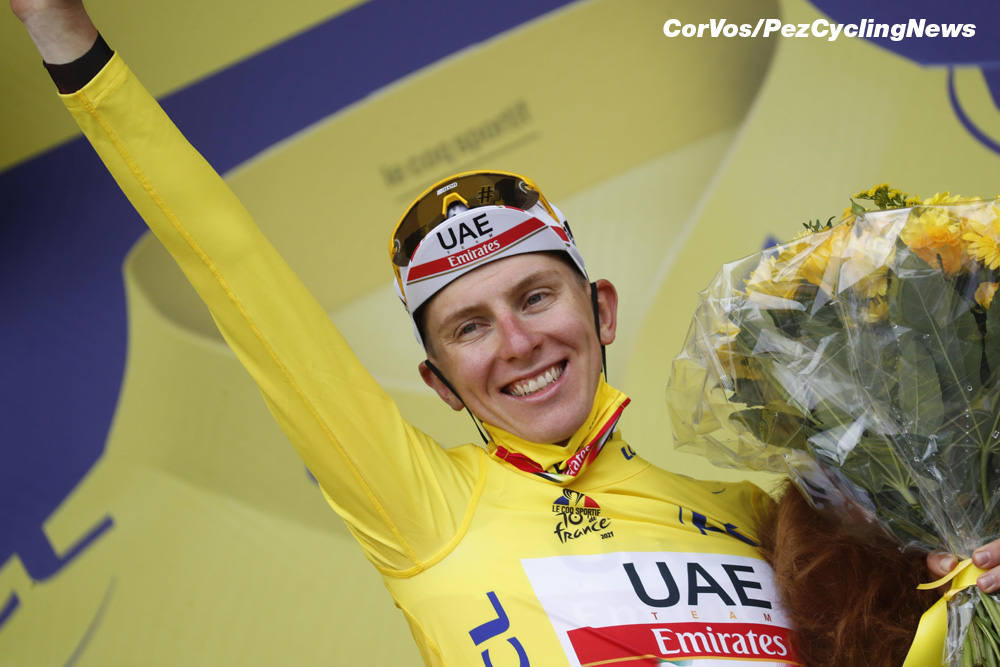 Another day closer to Paris