Stage Report: After a game of cat and mouse between Tadej Pogačar (UAE Team Emirates), Jonas Vingegaard (Jumbo-Visma) and Richard Carapaz (INEOS Grenadiers), the yellow jersey despatched his closest rivals in the last metres for the stage win on the Col du Portet. Vingegaard was second and now has 4 seconds on Carapaz on the overall standings. 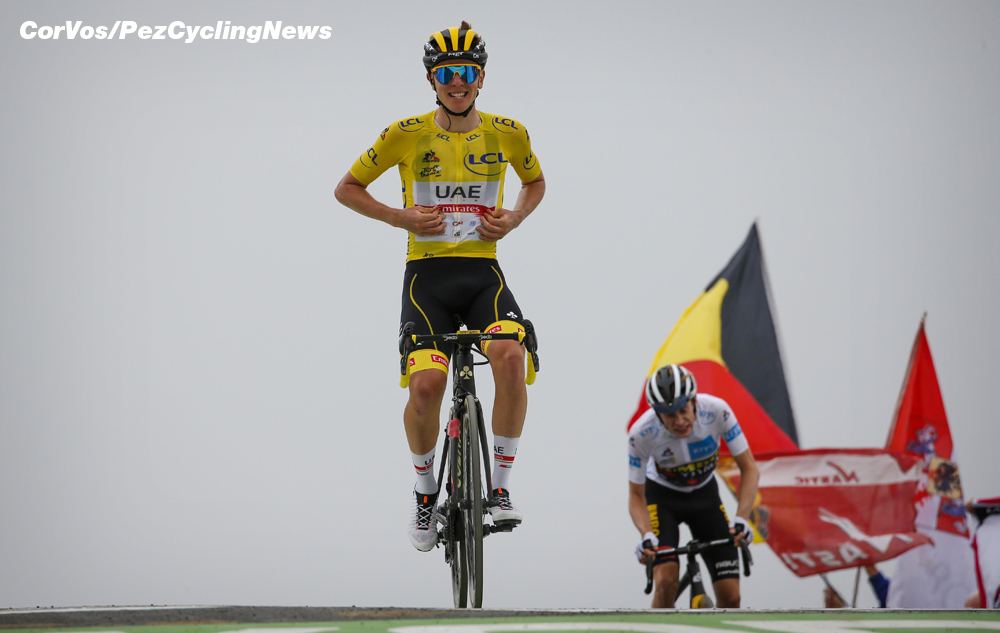 Tadej Pogačar won the Queen stage 17 to the Col du Portet. After an exciting battle with Jonas Vingegaard and Richard Carapaz on the final climb, the yellow jersey wearer jumped the other podium rider to crossed the line first.

– The final kilometre of Stage 17 and read our full report and pics below:- 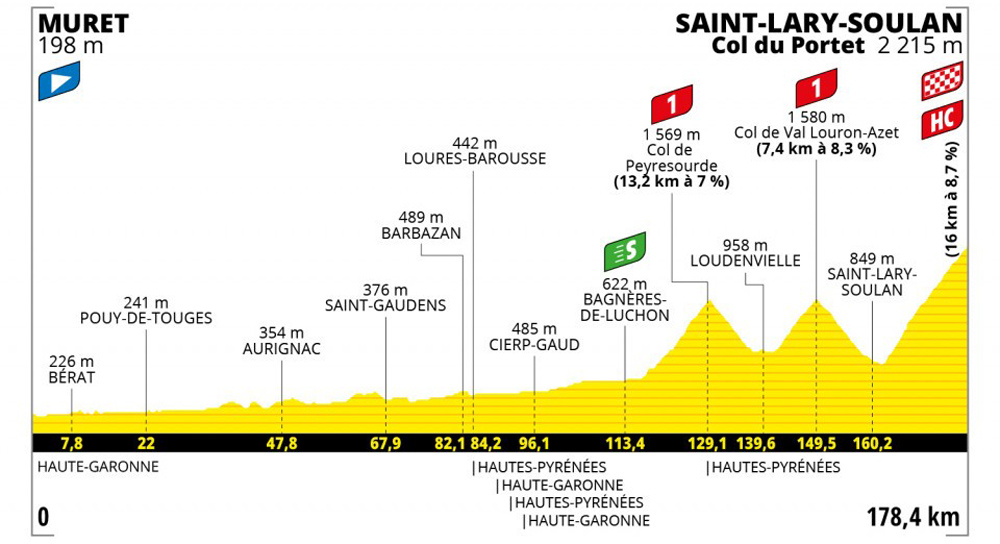 Tour boss Christian Prudhomme describes stage 17: “The Tour resumes from the bottom of the Pyrenees to face them differently with this stage that has two faces, with a big chain ring on over 100 kilometres before taking on three major obstacles in a row: Peyresourde, Val Louron-Azet and to finish off, the 16-km climb at an average gradient close to 9% of the unforgiving Col du Portet. Big efforts required for what promises to be quite a show.” 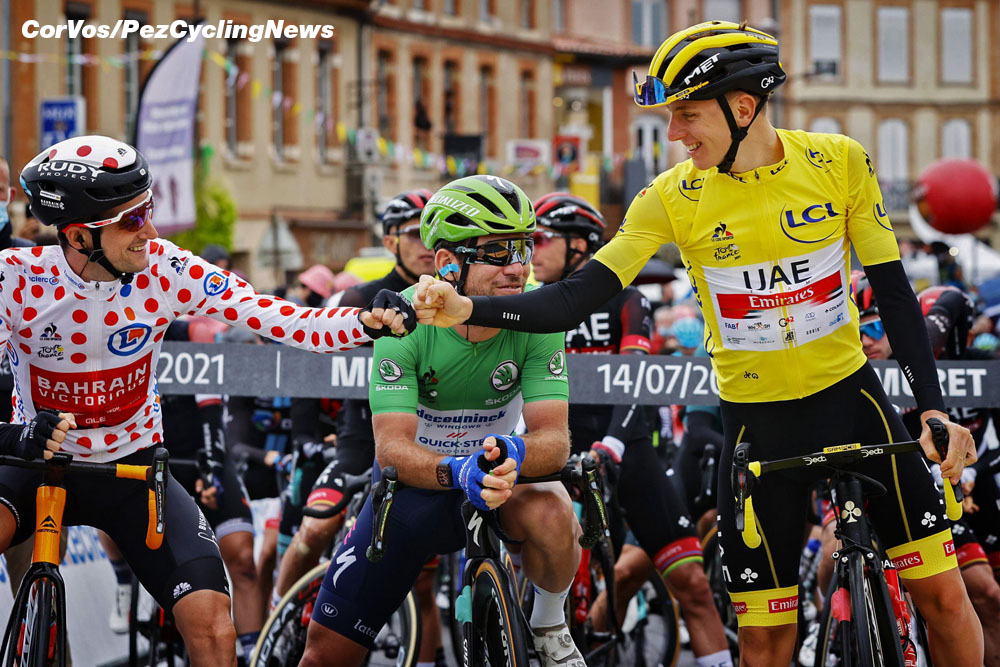 On the French national holiday, the peloton headed from Muret to Saint-Lary-Soulan in the Aure valley, the finish line was drawn on the Col du Portet. By the time the riders started the final Hors Category climb, they had already crossed the Peyresourde and the Val Louron-Azet. This made the final almost the same as in the ultra-short Tour stage 17 in 2018, which was won by Nairo Quintana.

The sunflowers are back

Magnus Cort was the first to attack. Wout Poels and Mark Cavendish were also at the front. Poels was there to defend his KOM jersey, while Cavendish had his eye on the intermediate sprint. The first 115 kilometres did not have any obstacles, which meant that the British sprinter could take points in the battle for the green jersey. Pierre Rolland was the first rider to take a serious gap, but the French climber’s attack attempt was short-lived. 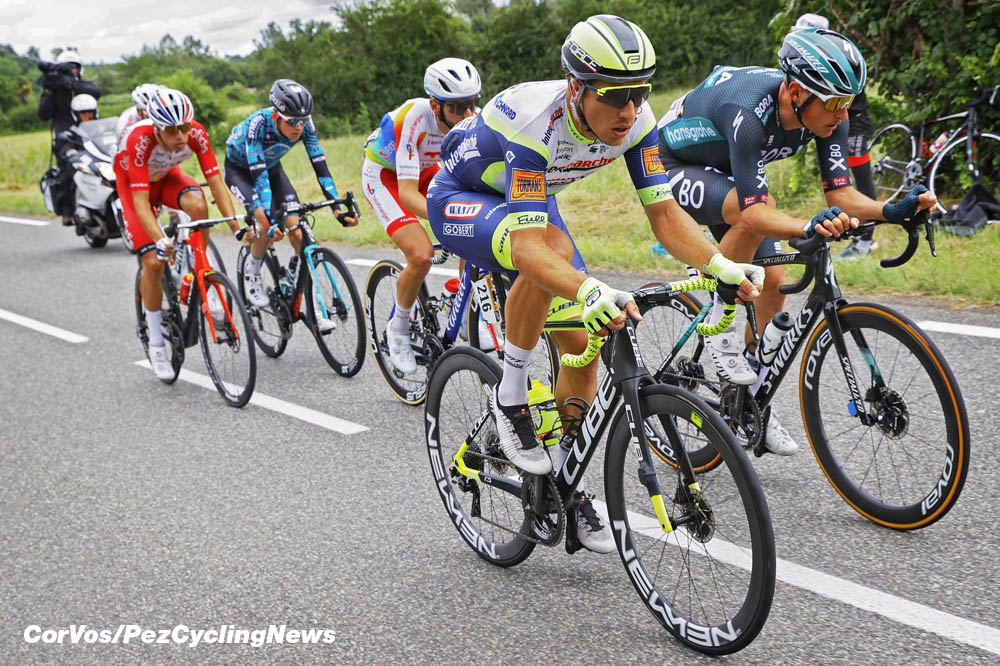 A Wanty rider, it must be a break – Danny Van Poppel

Lukas Pöstlberger, Anthony Perez, Dorian Godon and Danny van Poppel were more successful. Anthony Turgis, Maxime Chevalier and Julien Bernard also escaped the peloton for Deceuninck – Quick-Step and Movistar to put the block on. Turgis and Chevalier managed to cross to the four front riders, but Bernard was in trouble and was caught after 58 kilometres. The six-strong leading group, where Godon was the best classified rider in 84th place, more than two hours from the yellow jersey, had an 8 minute lead at that point. 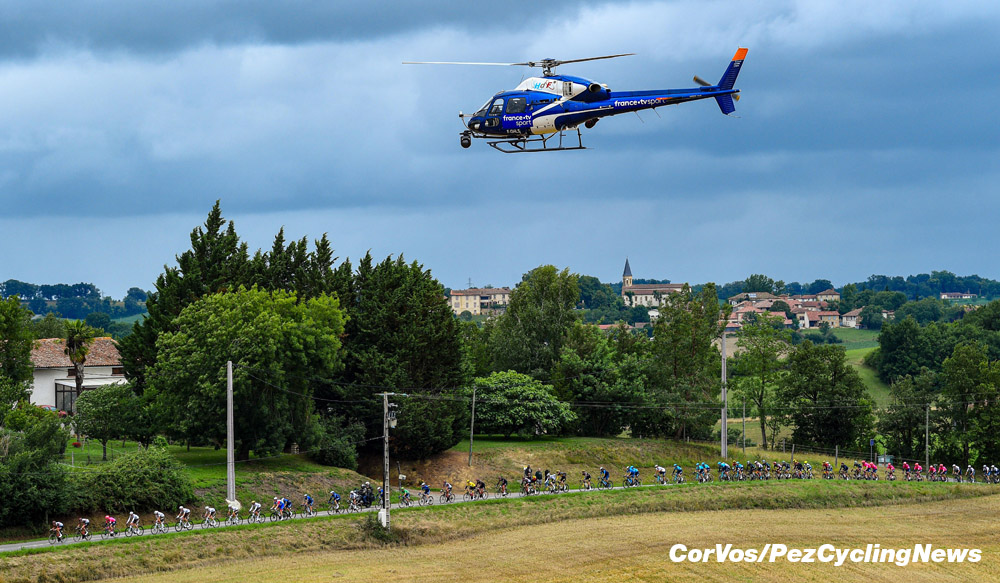 100 kilometres to the big climbs

Jumbo-Visma lost Steven Kruijswijk early in the stage. The Dutchman, 13th overall, started to feel sick on the rest day and didn’t improve. The Dutch team now only has four men. In the peloton, Vegard Stake Laengen of UAE Team Emirates and Connor Swift (Arkéa Samsic) took the lead to hold the break for Tadej Pogačar and Nairo Quintana. They were helped by Michael Woods’ men of Israel Start-Up Nation. Quintana and Woods had their sights set on the polka dot jersey. 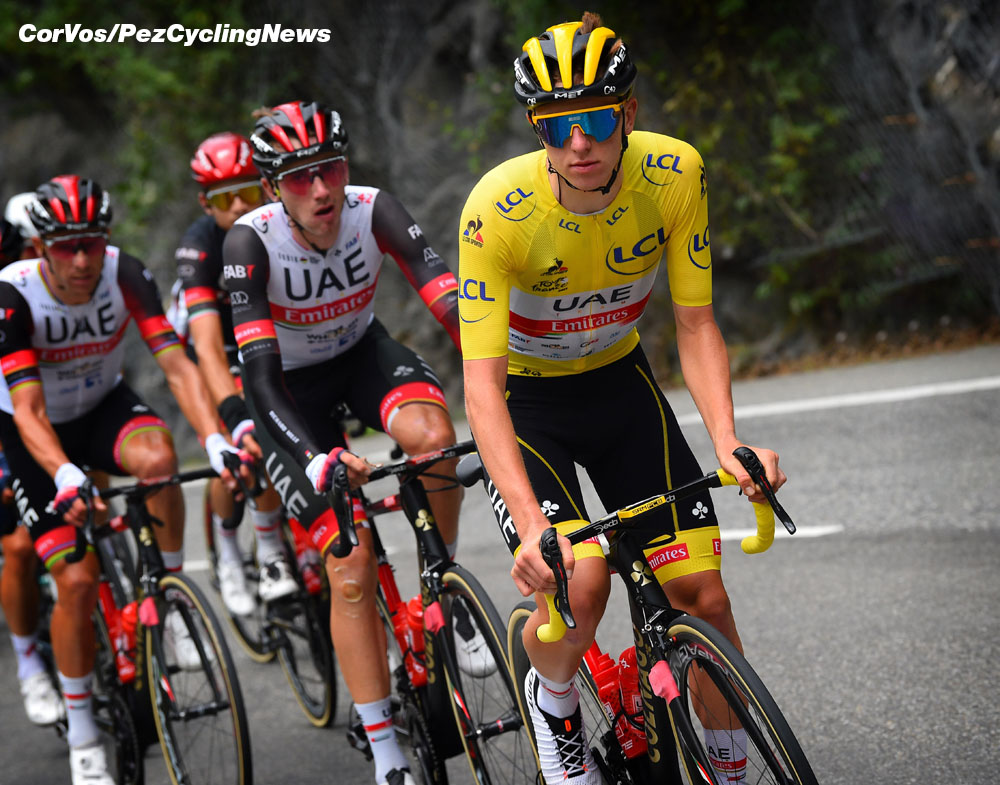 With 65 kilometres to go, the leading group came to the intermediate sprint in Bagnères-de-Luchon. Van Poppel showed his sprint and took the 20 points, ahead of Turgis. Godon was third. The other escapees didn’t interfere in the points battle. The peloton also sprinted for the points. It was Luka Mezgec who took the lead in front of Michael Matthews, ahead of Cavendish, Michael Mørkøv and Sonny Colbrelli. The fast man from BikeExchange gained a point in the battle for green. 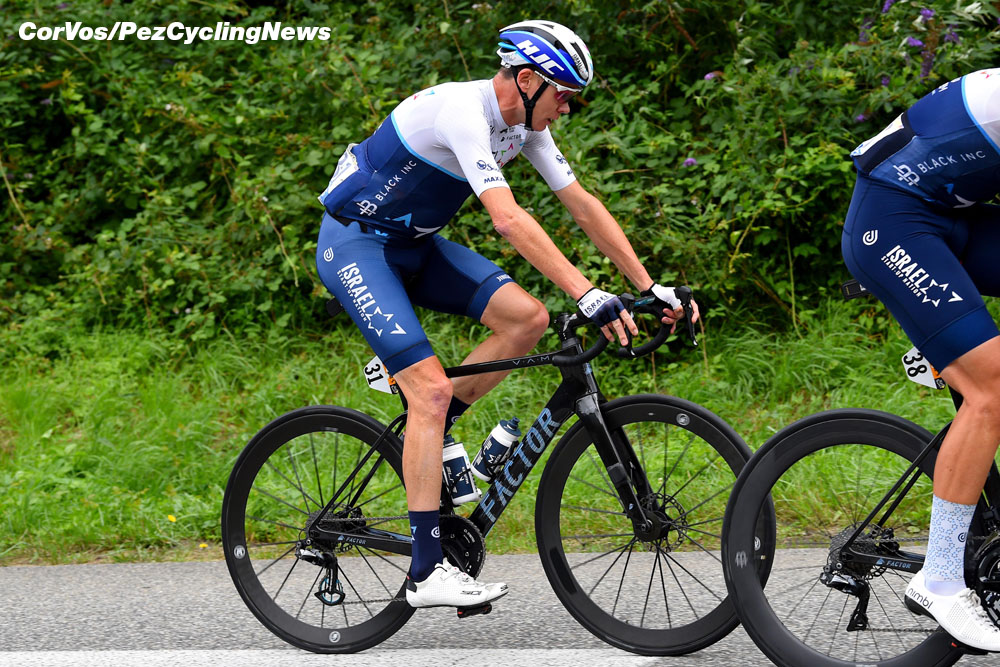 Chris Froome not looking so good

Then the Col de Peyresourde started, the first climb of the day. Élie Gesbert rode away from the peloton and his teammate Quintana jumped after him. Poels was alert and jumped too. Pierre Latour joined the trio. The peloton was never far away and a little later Gesbert, Quintana and Poels were caught. Latour attacked one more time and rode on alone. At the top of the Peyresourde, Turgis was first, ahead of Perez and Godon. Turgis followed at 3:20, the peloton at 4 minutes. 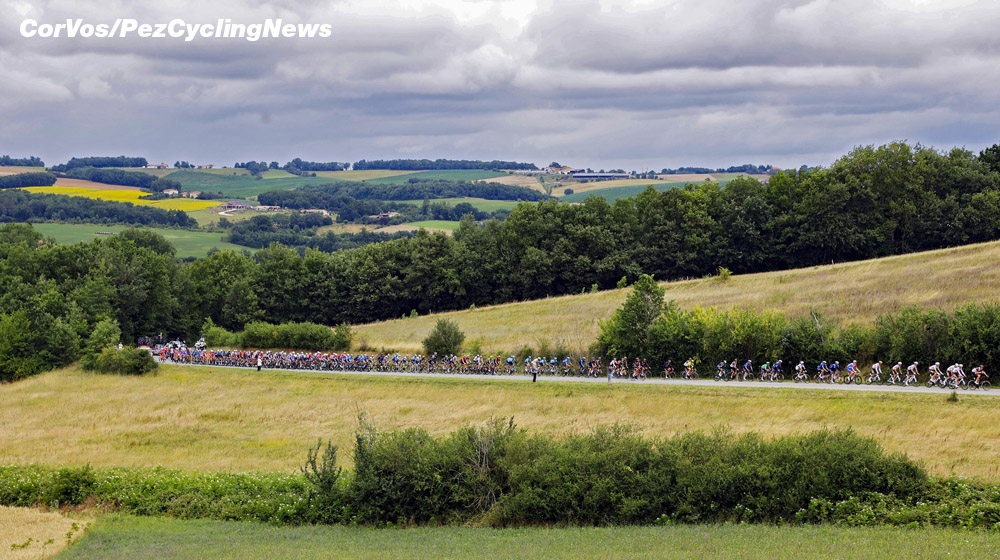 On the next climb, the Val Louron-Azet, Perez, Godon and Turgis dropped their three fellow escapees, giving us three French leaders on Bastille Day. With 3.5 kilometres to the top, Perez pulled away from Godon and Turgis and go solo. The lead of the French attacker, who extended his contract with Cofidis today, had 4 minutes on the peloton, Latour had fallen back. Pöstlberger, Van Poppel and Chevalier were also overtaken by Davide Formolo, who set the pace for Pogačar in the increasingly smaller main group. 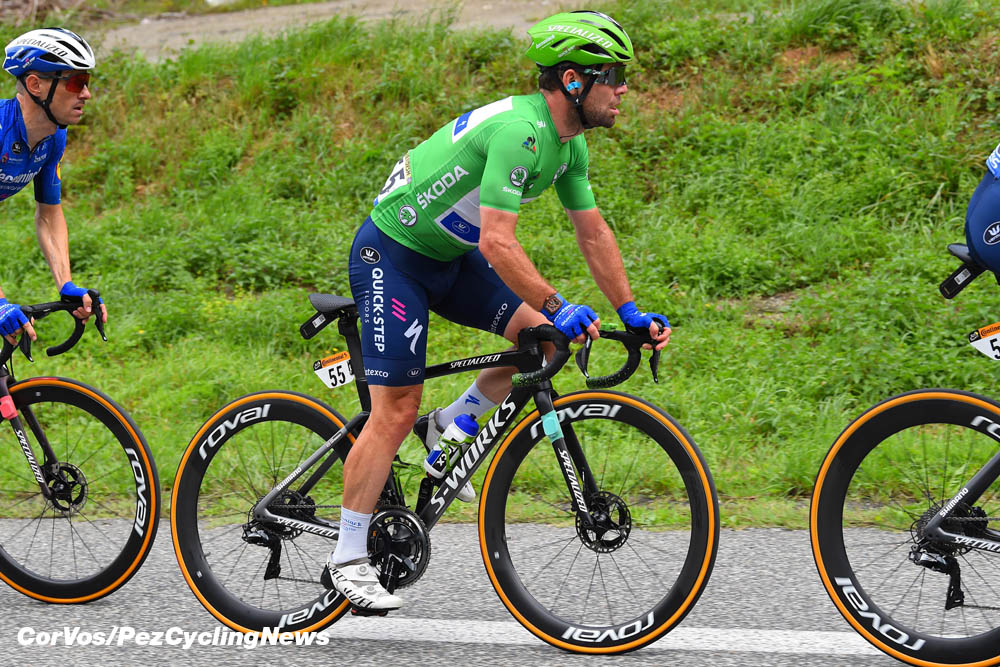 Mark Cavendish should be in the time limit today 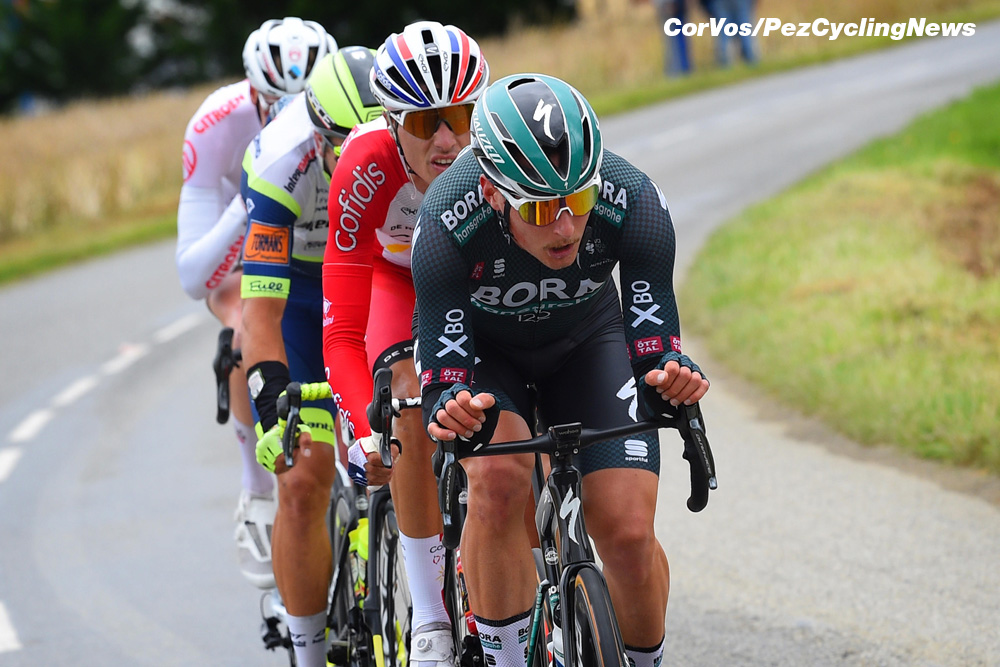 Postelberger maybe wanted to emulate his BORA-hansgrohe teammates with a stage win, but it wasn’t to be

Perez was the first to cross the top of the Val Louron-Azet, with a small lead over Godon. The tall rider of AG2R Citroën came back on the descent, and we again had two front riders. Turgis was third on top, while Poels (four) and Quintana (two) scored points for the mountains classification. After the descent, Perez and Godon started the 16-kilometre Col du Portet with just under 4 minutes lead on the pack, with an average slope of 8.7%. This climb took the riders to 2215 metres and was the highest uphill finish of this Tour. 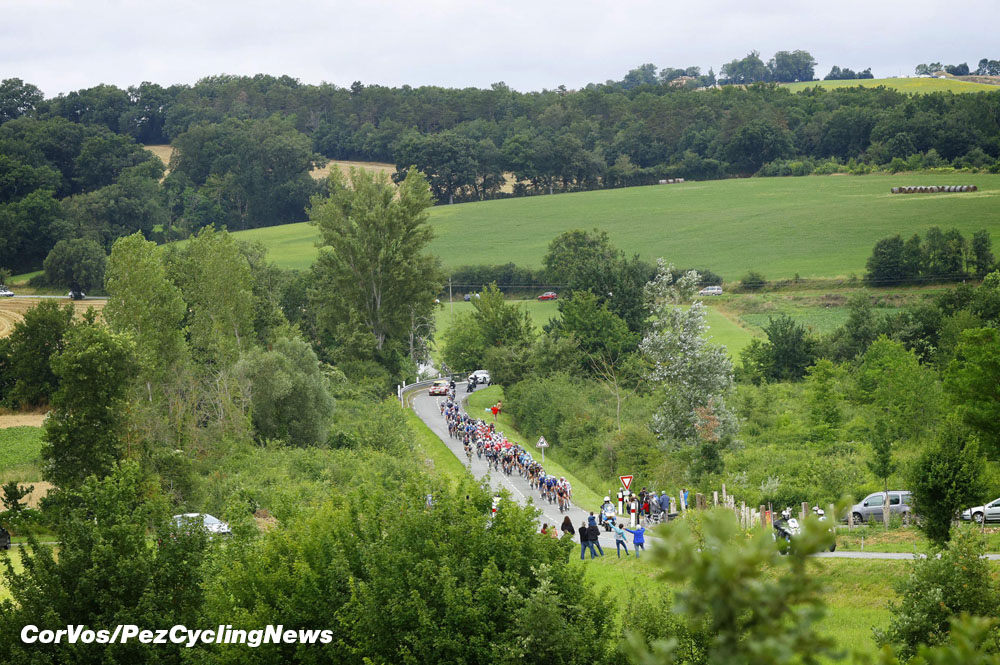 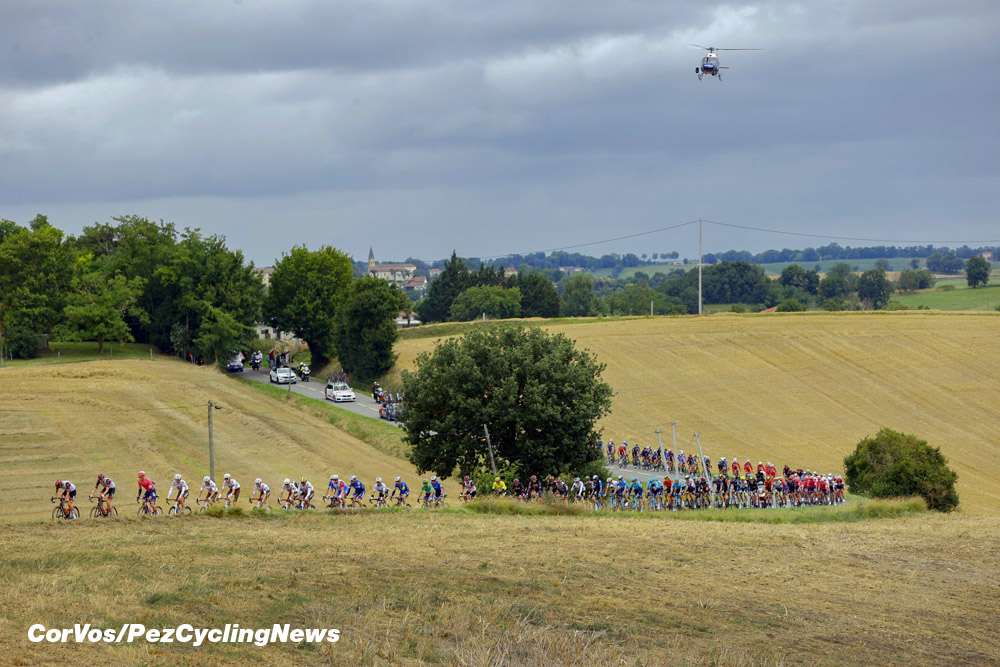 The top men were keeping their powder dry for the finalé

With 13 kilometres to go, Perez left Godon to continue alone. The French had 3 minutes on the peloton, where UAE Team Emirates still set the pace. Wilco Kelderman had a mechanical problem just before the final climb, but was able to take his place in the yellow jersey group again. In the favourites group, Enric Mas (eighth) and Guillaume Martin (ninth) were the first riders from the top-10 to have problems. Poels also had to let the group go, while Michael Woods was able to maintain his place. The Canadian rider posed a threat to the Dutchman’s polka dot jersey. 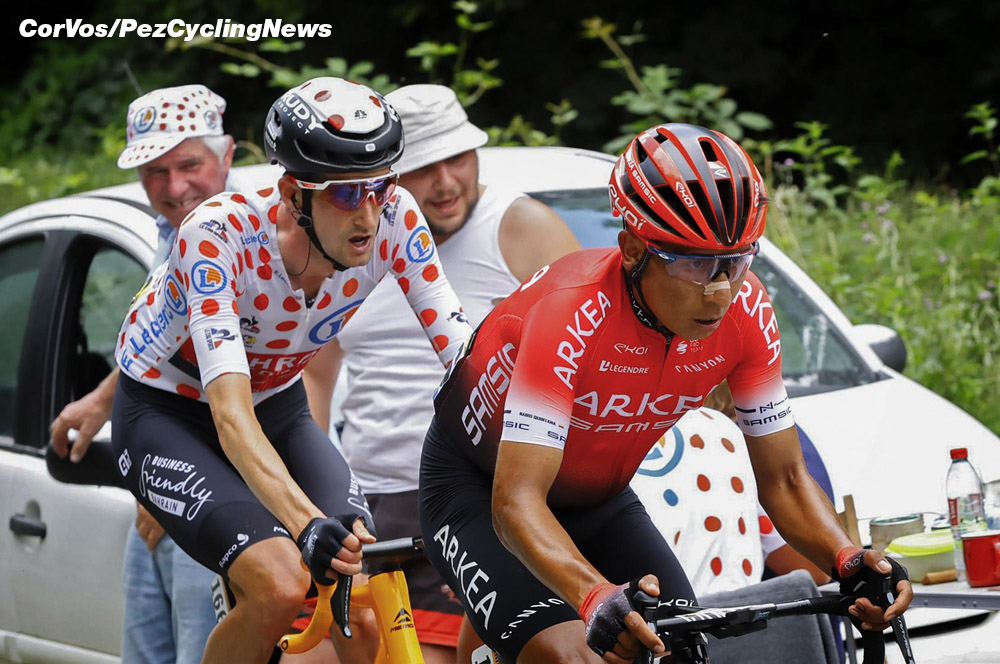 The battle for the KOM was on between Wout Poels and Nairo Quintana, the Colombian was first to crack 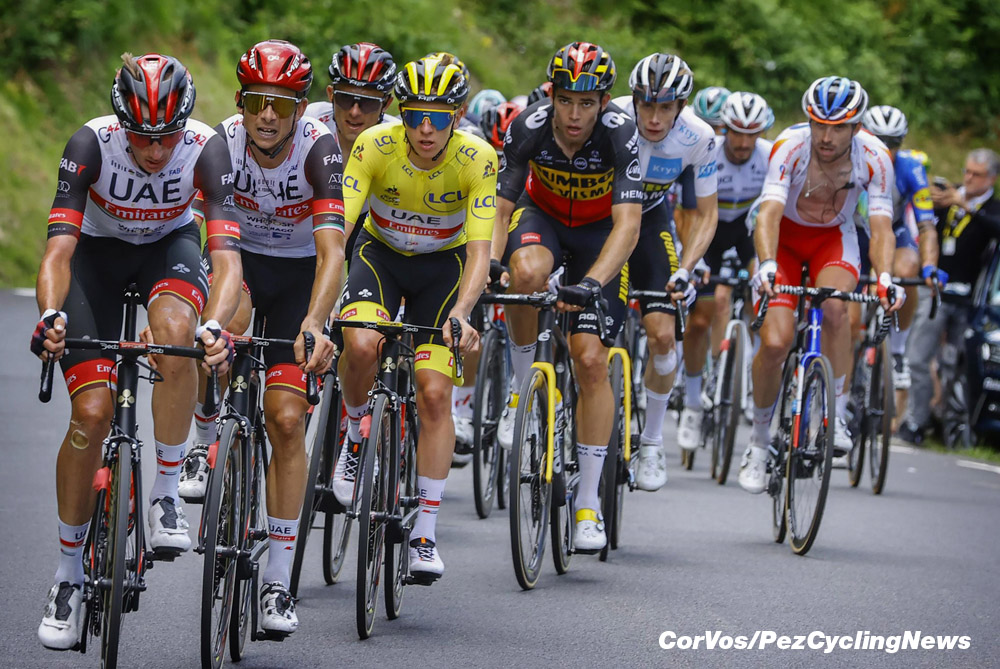 Rafał Majka was Pogačar’s last lead-man in the favourites group, in which Alexey Lutsenko also struggled to keep up with the pace. With 9 kilometres from the finish, Pello Bilbao accelerated from the favourites, but the Spaniard was pulled back by Majka with one last effort. Then it was up to Pogačar himself, the yellow jersey caught up with the only remaining leader, Perez. Only Rigoberto Urán, Jonas Vingegaard and Richard Carapaz were able to follow the Slovenian’s acceleration 8 kilometres from the finish. Moments later, Urán was also in trouble and had loose his 2nd place overall. 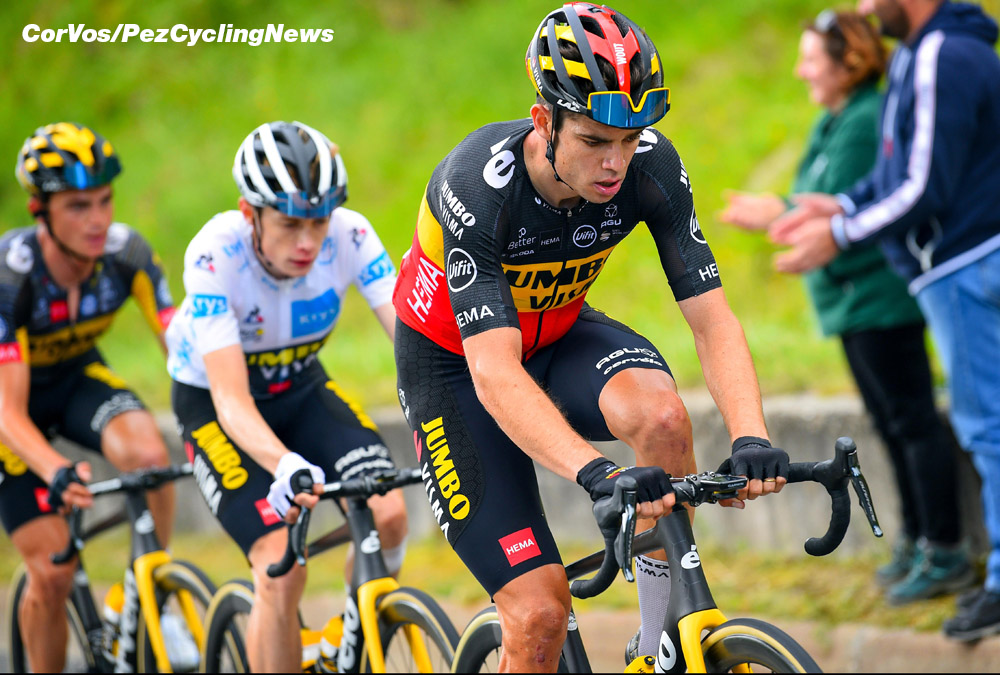 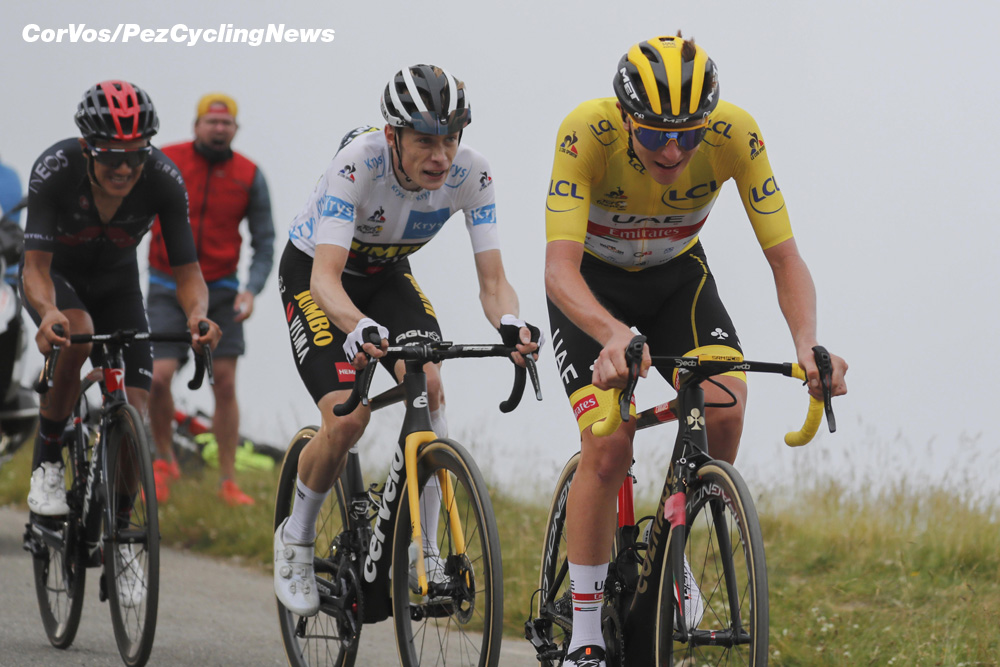 Pogačar and Vingegaard alternated the work, while Carapaz managed to hang on. With 5.5 kilometres to go, Pogačar accelerated again, but Vingegaard and Carapaz remained on his wheel. Pogačar attacked two more times 2 kilometres from the finish, but again Vingegaard and Carapaz stayed with him. Was Carapaz playing a game? The INEOS Grenadiers rider turned out to be waiting his moment and attacked with 1200 metres to go. With that move he dropped Vingegaard, but Pogačar managed to hold his wheel. 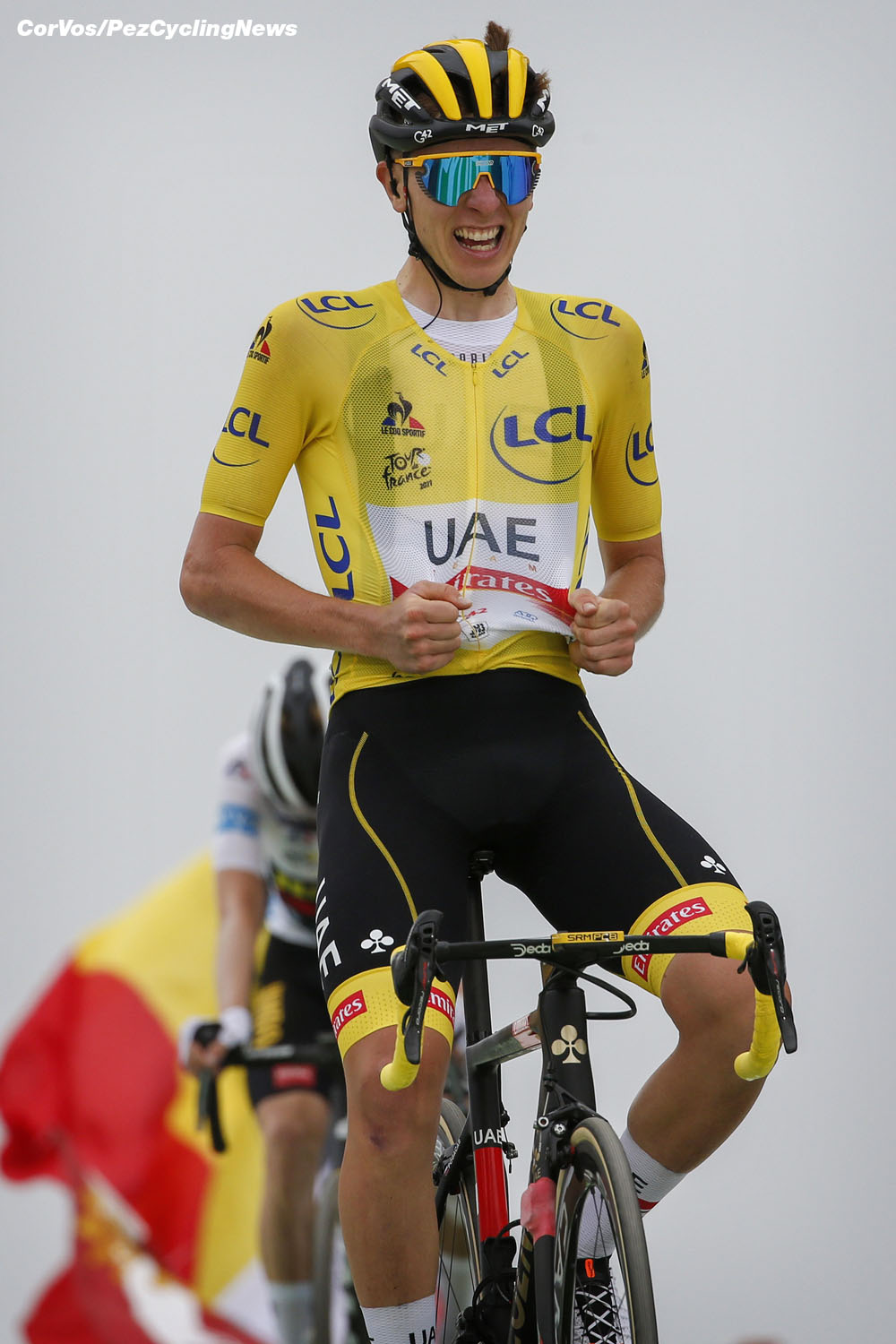 In a league of his own – Tadej Pogačar

Vingegaard was able to fight back in the last kilometre, but Pogačar was unstoppable for the stage victory. The Slovenian sprinted to the line, dropping his fellow attackers. He also earned 10 bonus seconds. Behind Pogačar, Vingegaard and Carapaz, David Gaudu was the best of the rest in 4th place. Ben O’Connor crossed the line in fifth, Wilco Kelderman in sixth with a cut chin. Pello Bilbao, Sergio Higuita, Rigoberto Urán and Dylan Teuns completed the top-10 of the day’s results. 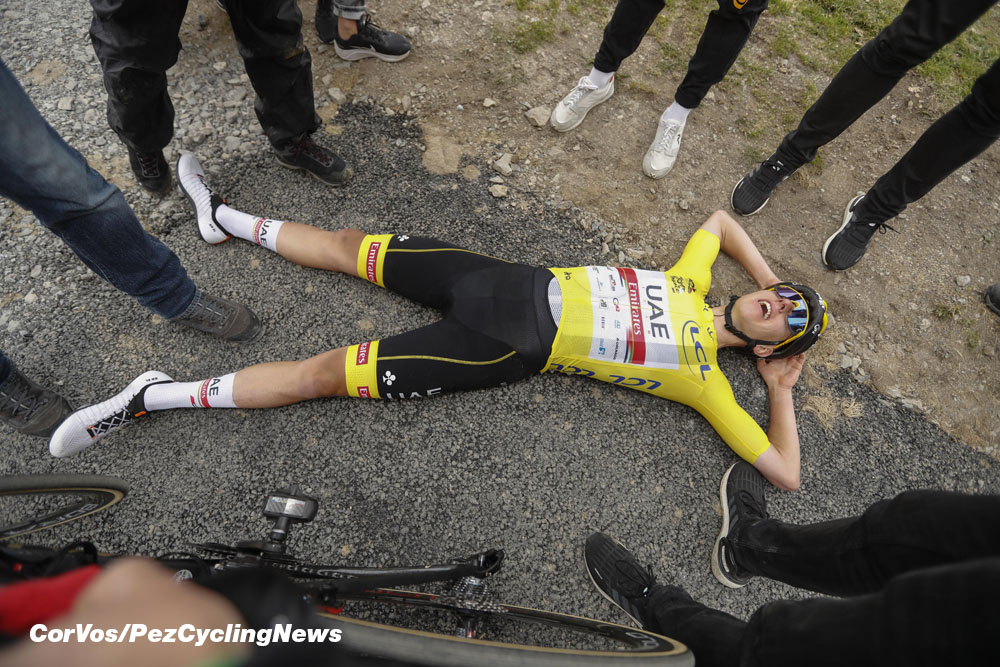 It was a hard last metres

Stage winner, overall leader and best young rider, Tadej Pogačar (UAE Team Emirates): “It has been very hard to defend the yellow jersey every single day. We couldn’t fight for the stage win because almost every day was good for the breakaway [to make it to the finish], so we couldn’t do much. Today it was a good stage to control from the beginning, more like a 50/50 between the breakaway and the bunch. In the end, everyone in my team felt good and we managed to bring it back. I tried to get the stage win… and it turned out well. [When I attacked, Richard] Carapaz, [Jonas] Vingegaard and I went clear, but only Jonas and I cooperated to put some distance between us and the rest of the GC favourites. At some point, Jonas came by and told me that he thought Carapaz was bluffing. I knew it also: that’s tactics in pro cycling. When Carapaz attacked, I was very driven to catch him and hold his wheel. I just sprinted out on the last 150 meters. It has been a fantastic day. To win in the yellow jersey is something I can’t describe.” 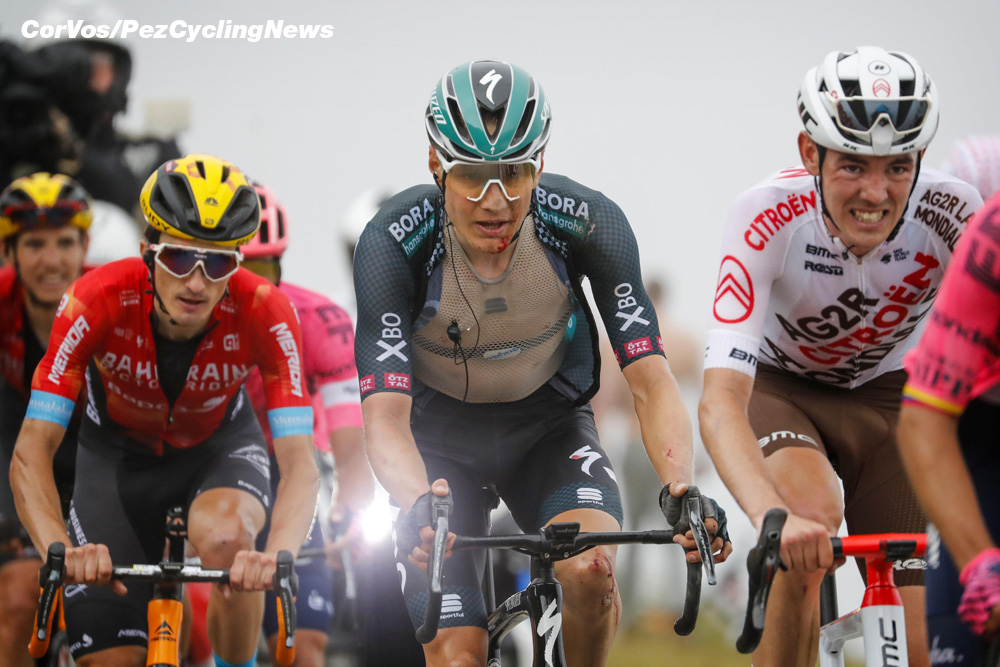