Stage Report: Two stages in a row and the King of the Mountains jersey to add to the yellow and the white, yes, that’s the Tadej Pogačar (UAE Team Emirates) 2021 Tour domination. In a repeat of the finalé of stage 17, the Slovenian jumped in the last uphill metres for the stage win… and made it look easy. Mark Cavendish finished within the time limit. 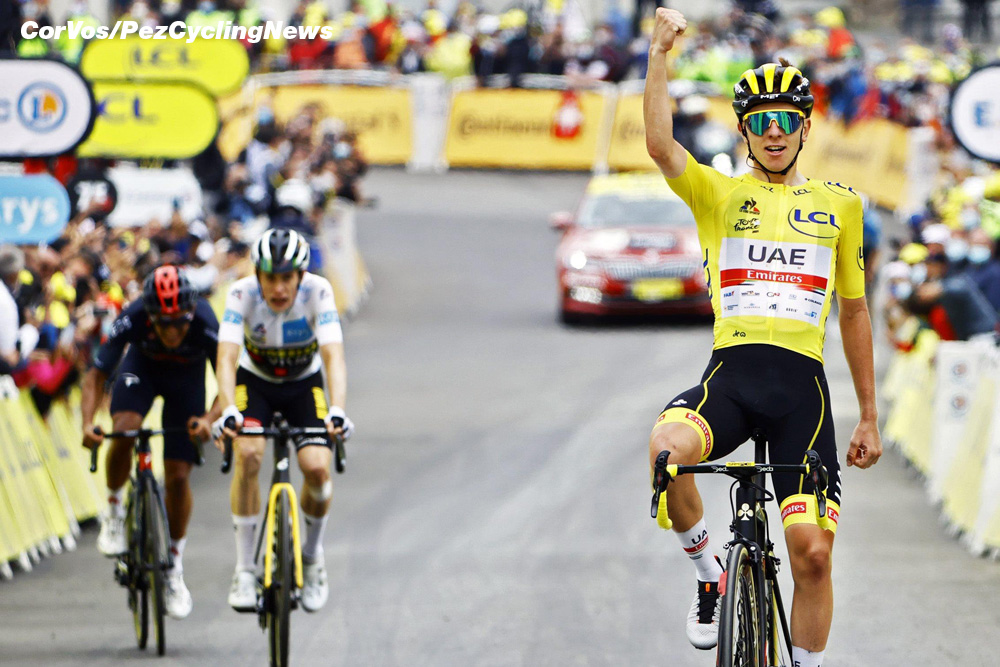 Stage win and another jersey for Tadej Pogačar

– The final kilometre of Stage 18 and read our full report and pics below:-

The last Pyrenees stage of the Tour de France, finishing in the Luz Ardiden ski station, was won by Tadej Pogačar. The UAE Team Emirates Slovenian once again proved to be the best climber in this Tour by beating Jonas Vingegaard and Richard Carapaz. Pogačar also took over the mountain jersey from Wout Poels. 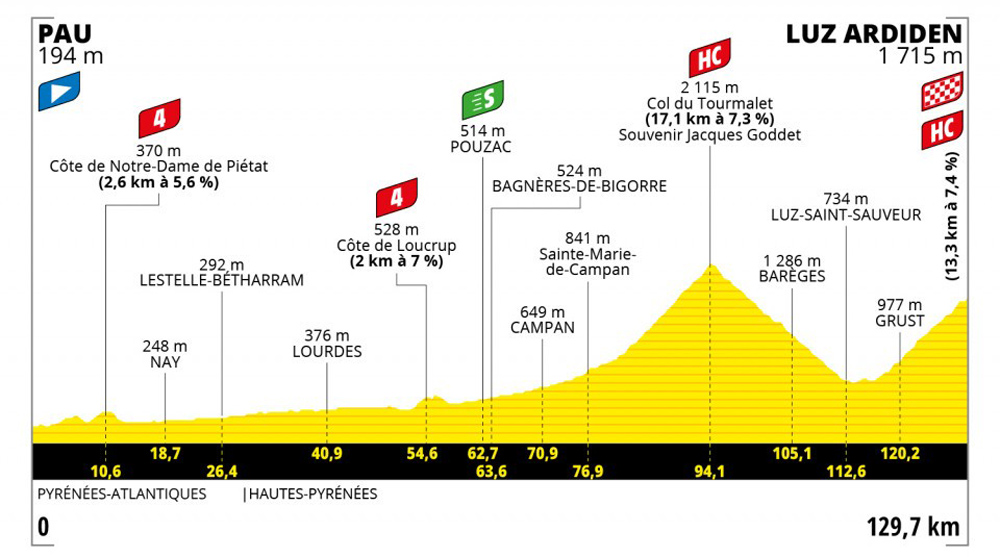 Tour boss Christian Prudhomme describes stage 18: “Dense, tense, selective with the climbs up two giants of the Pyrenees: the Tourmalet and Luz Ardiden, where the verdict of the final mountain battle will be known. The climbing type leaders will have to find a way to gain enough time in the GC on those who are better in time-trials.” 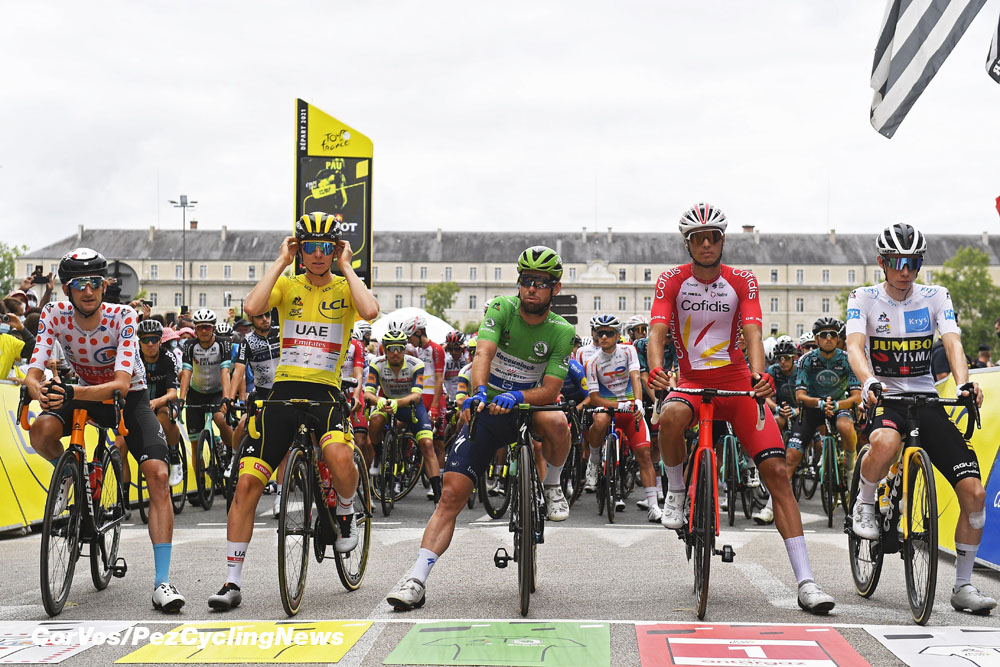 The peloton lines up for the last day in the mountains

The day after the battle between Tadej Pogačar, Jonas Vingegaard and Richard Carapaz on the misty climb of the Col du Portet, the riders were presented with one last Pyrenean stage. Stage 18, the last mountain stage of this Tour, the riders had to climb the iconic Col du Tourmalet, then after a lightning-fast descent, it would be time for the final climb to the Luz Ardiden ski station. 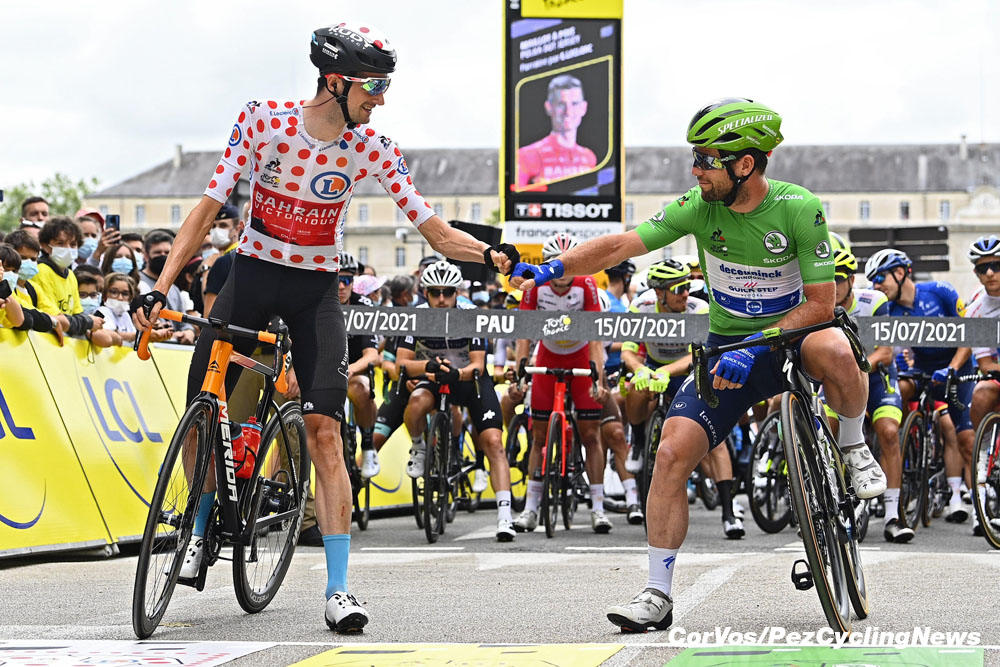 With yellow jersey wearer Pogačar, green Mark Cavendish, Jonas Vingegaard (white jersey wearer for Pogačar) and KOM Wout Poels in the front row, the peloton started in dry conditions. Matej Mohoric decided to be first up the road after the flag was dropped. The stage winner in Le Creusot was joined by Christopher Juul-Jensen and Sean Bennett. 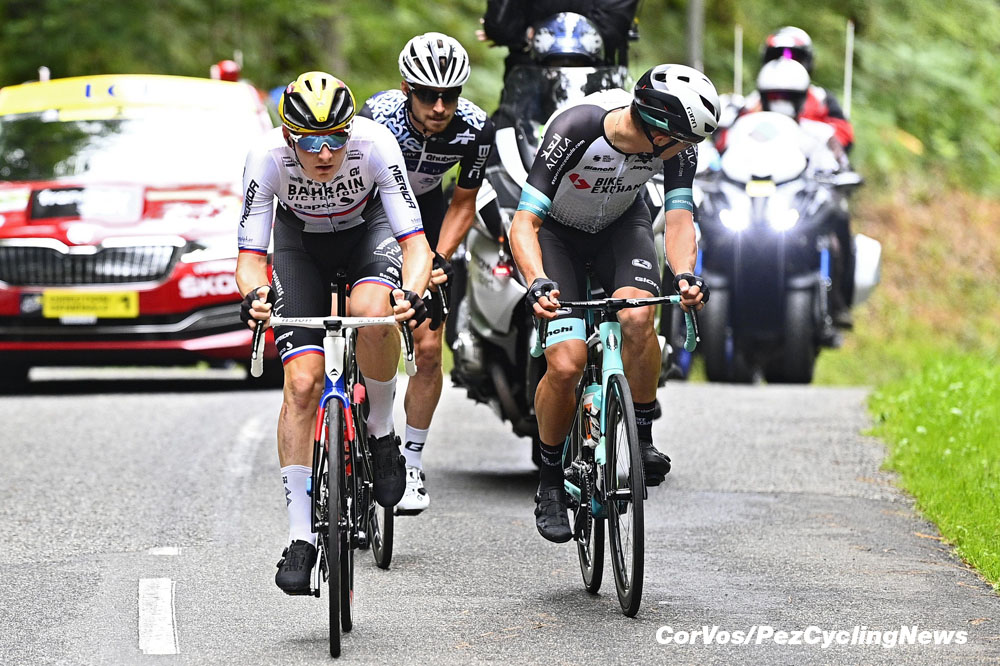 First break of the day

Mohoric, Bennett and Juul-Jensen turned out to be good allies and the three front quickly took a minute ahead on the peloton. Julian Alaphilippe sensed the danger and decided to counter-attack. The World champion made the crossing together with Pierre-Luc Périchon, and after a fast chase we had five front riders. In the peloton the men of Bahrain Victorious checking everything for Wout Poels. 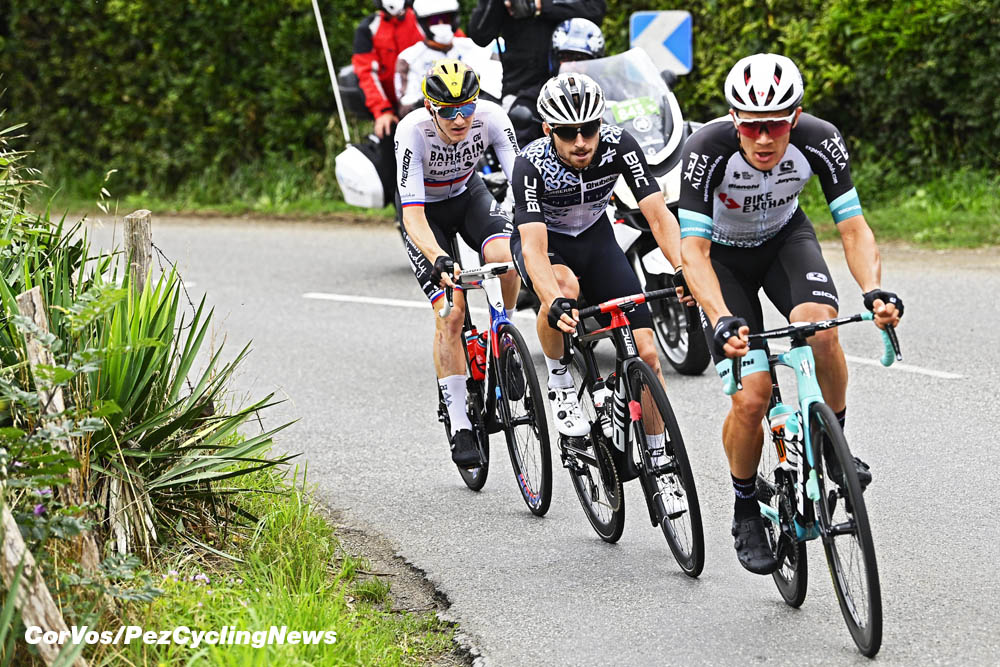 Matej Mohoric, Sean Bennett and Christopher Juul-Jensen started the action on the road to Luz Ardiden

Before the start of the stage, the Dutchman said that he was going for the mountain points at the top of the Col du Tourmalet, so it was important to keep the front riders within catching distance. On the Côte de Loucrup, the second categorised climb of the day, the peloton started to speed up. BikeExchange took charge of the race for their sprinter Michael Matthews, with the aim of dropping green jersey Mark Cavendish, but the Manxnam managed to hang on. 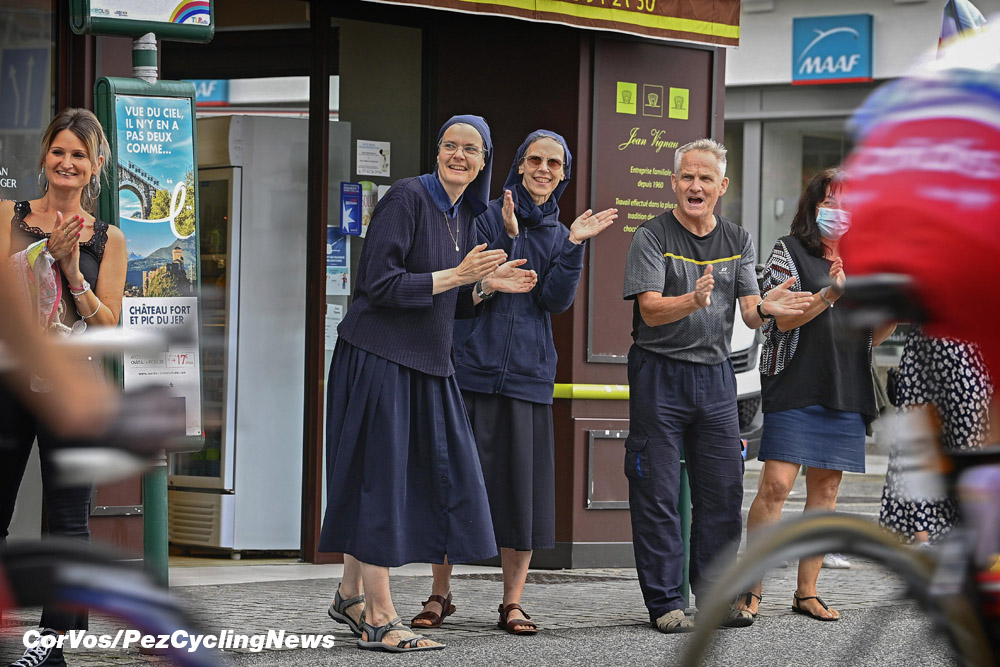 Good day for the fans

Calmness returned to the peloton for a while and so we had to wait for the intermediate sprint in Pouzac for some more fun. Alaphilippe came through first and took the full 20 points, followed by Mohoric, Péricon and Bennett. Behind, we saw Cavendish doing good work: the British sprinter was 5th for 11 points. Matthews and Sonny Colbrelli, the two main challengers for the green jersey, had to settle for nine and seven points. 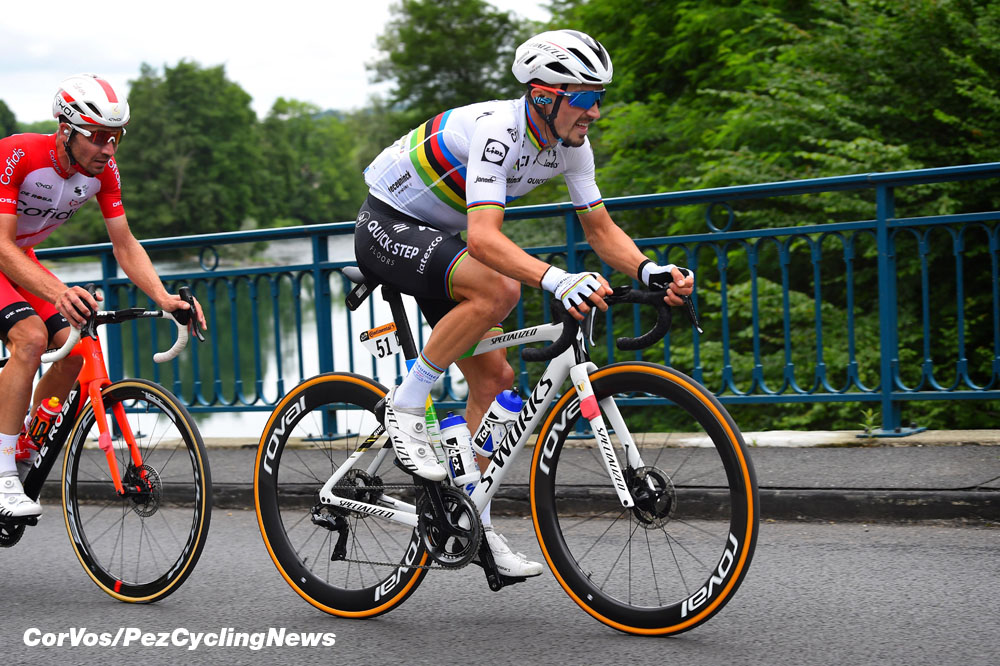 Alaphilippe wanted in the move of the day

After the intermediate sprint in Pouzac, the road started to rise towards the foot of the Tourmalet. At the front, Mohoric and Alaphilippe were together at the start of the dreaded col, climbing to a height of 2,115 metres. The lead of the two had already shrunk to 1 minute and the difference became smaller and smaller after a few accelerations in the peloton. David Gaudu, Ion Izagirre, Nairo Quintana and Miguel Ángel López tried to cross. 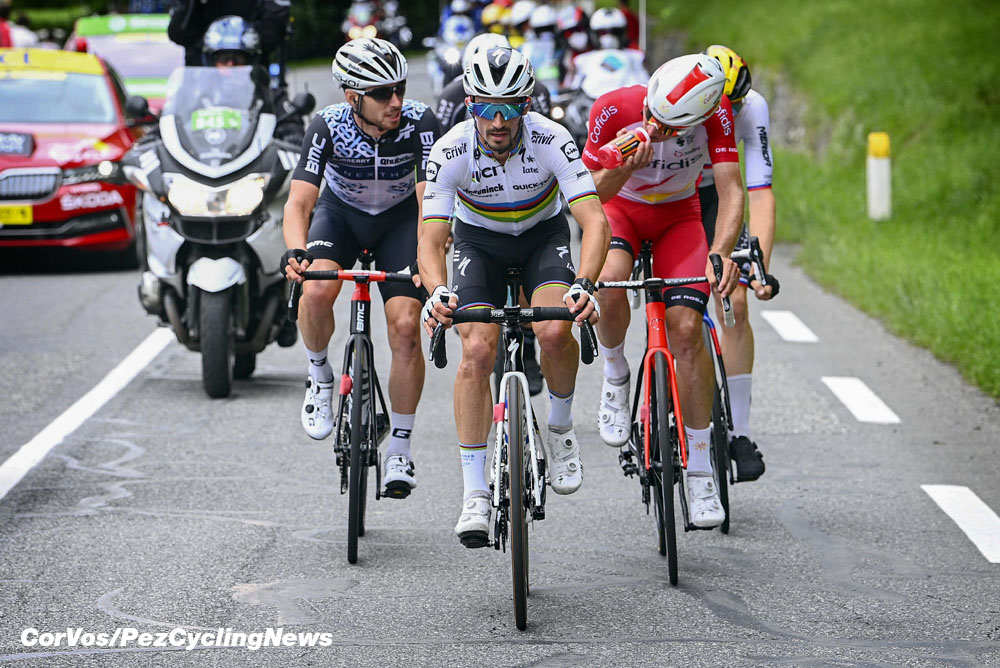 Alaphilippe and Perez made it across to the break

It turned out to be the end for Alaphilippe and Mohoric, who were caught 6 kilometres from the top by a group including Gaudu, Izagirre, Valentin Madouas, Kenny Elissonde, Omar Fraile, Ruben Guerreiro and Pierre Latour. The group of favourites, led by INEOS Grenadiers, was only half a minute behind the nine leaders, which was only four after an attack from Gaudu. 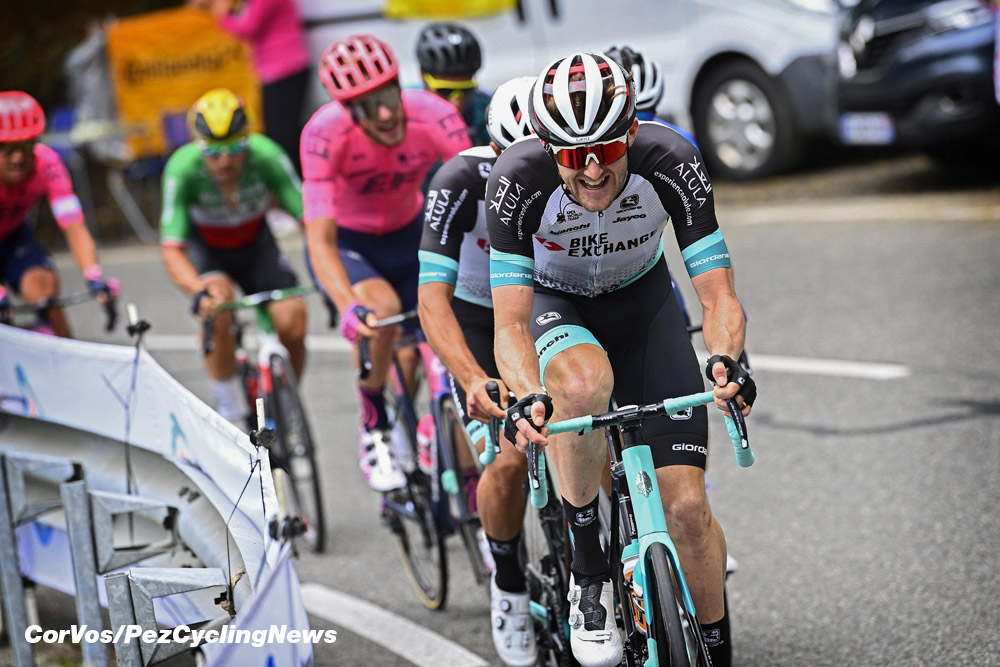 BikeExchange were controlling the peloton for Matthews and the intermediate sprint – It didn’t work, Cavendish took the points behind the break

Alaphilippe, Latour and Guerreiro were able to hold on, but for Izagirre and Elissonde it was too fast. At 3 kilometres from the summit, the lights went out for Alaphilippe, which left Gaudu, Latour and Guerreiro heading towards the top of the Tourmalet. Meanwhile, Rigoberto Urán, 4th overall, was in trouble. The Colombian had a real ‘jour sans’, was helped by his teammates, but could hardly make any progress. 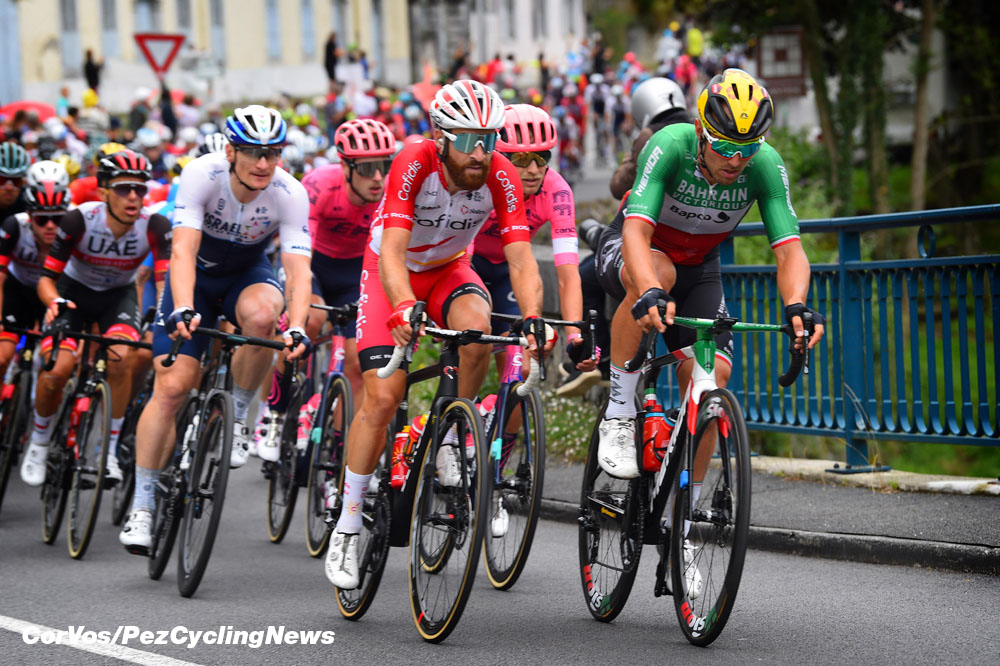 Colbrelli also missed out at the sprint

The leader of EF Education-Nippo, who for a long time seemed on his way to a podium place in Paris, was dropped from the group containing all the other GC riders, led by a strong Dylan van Baarle. Where a struggling Urán was dropped, Michael Woods decided to take a shot at gaining some mountain points. The Canadian tried to jump to the Gaudu group, but Wout Poels, in his polka-dot jersey, didn’t give Woods an inch. 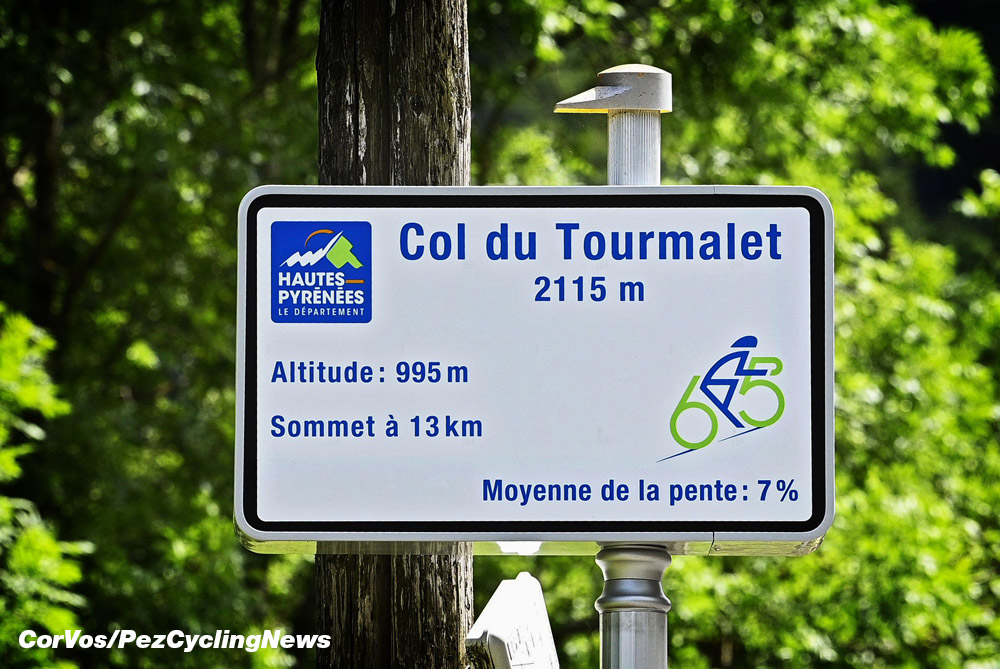 Latour was the first to the top of the Tourmalet, with Gaudu on his wheel and Guerreiro slightly behind. The latter just managed to hold off Poels, who managed to collect 10 points. Poels was the best of the KOM hopefuls, Woods took 6 points, Pogačar and Quintana took zero on the Tourmalet. Wout van Aert was the first on the descent, followed by teammate Vingegaard. 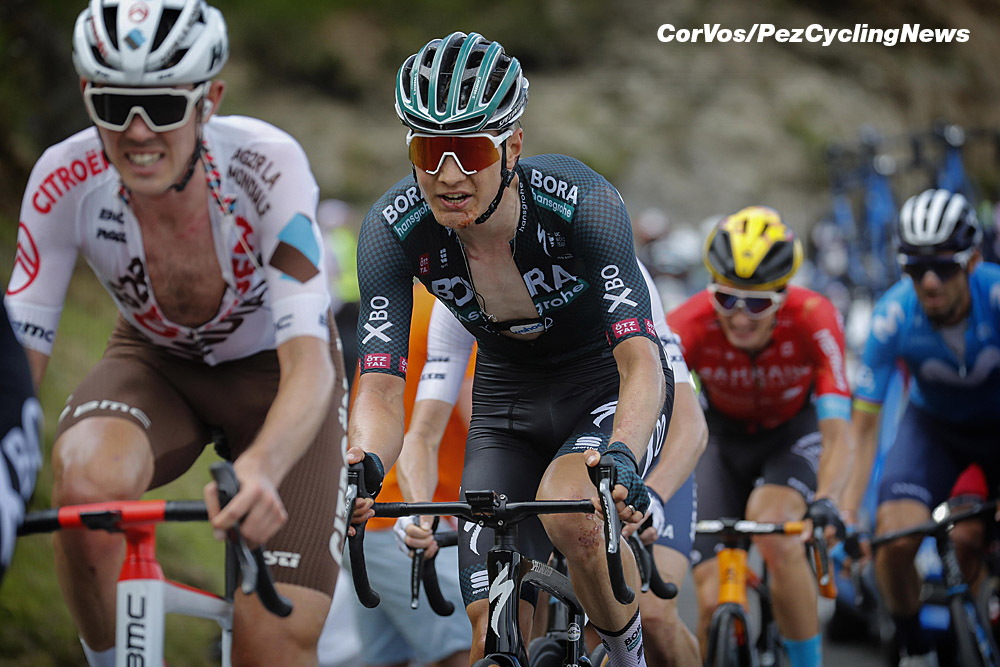 In the fast descent of the Tourmalet, Gaudu dropped like a stone, leaving Latour. The TotalEnergies rider ended up in no man’s land and was caught not much later by Poels, Guerreiro, Fraile and Woods. Gaudu didn’t look back, and rode alone through the valley towards the final climb to Luz Ardiden and was the first to reach the foot of the 13.3 kilometre long col. However, the lead on the group of GC riders was only 15 seconds. 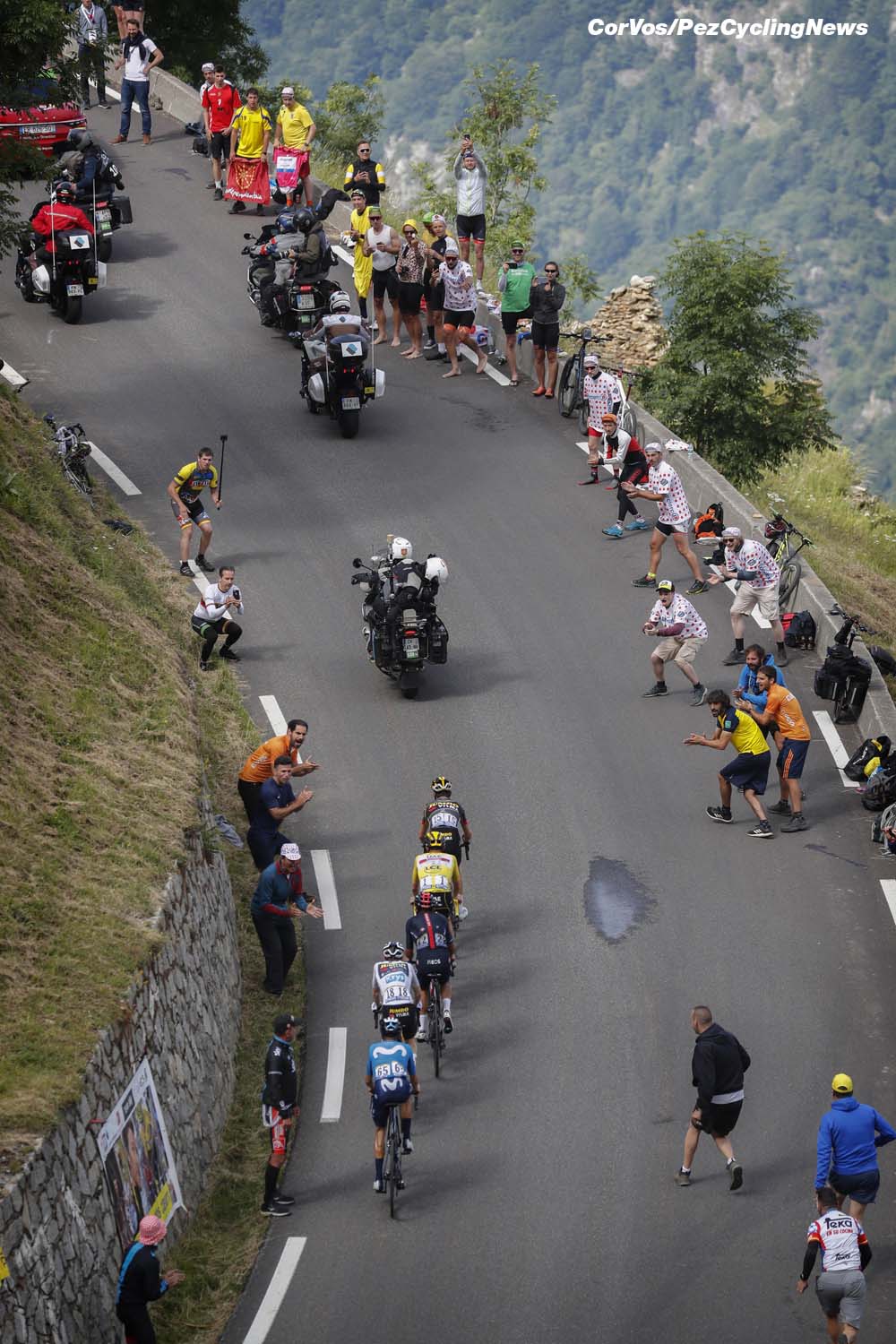 Poels, Guerreiro, Latour and Woods, the first pursuers of Gaudu, had been caught by the men of INEOS Grenadiers. Further back, Urán started the last real climb of this Tour, 2 minutes behind. We had to wait for first attack from the GC group, although the back door was wide open. Woods and Quintana were able to finally forget their ambitions for the KOM jersey and Poels also had trouble keeping up with group. 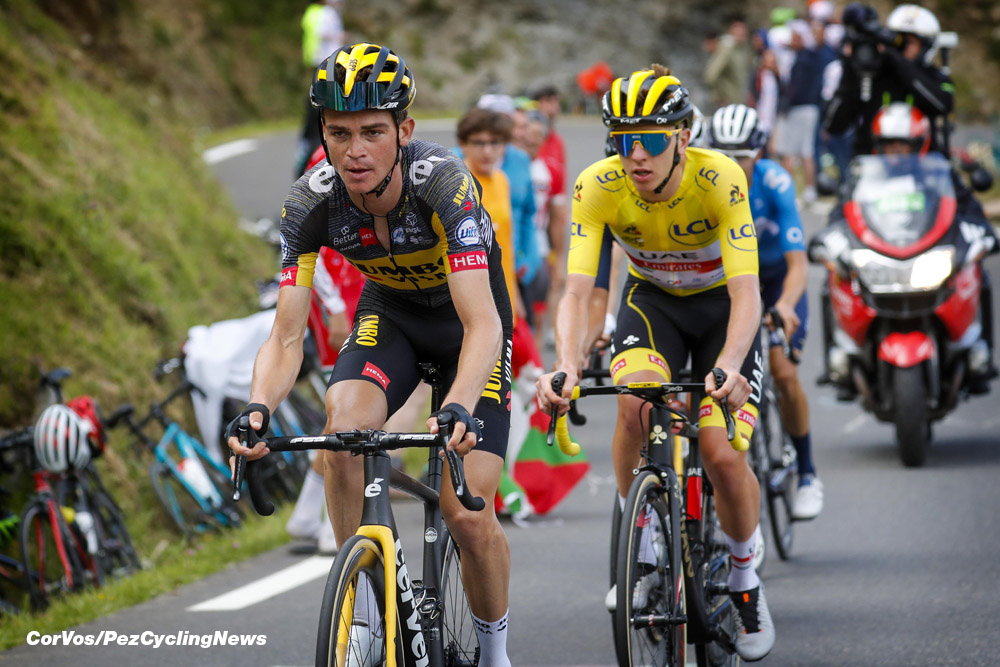 Vingegaard had Kuss, but it wasn’t enough to stop Pogačar

After a long turn from Tao Geoghegan Hart, Pogačar put Rafal Majka on the front to increase the pace a bit. This turned out to be the death knell for Wout van Aert, the brave Gaudu, Alexey Lutsenko, Pello Bilbao and the yo-yoing Poels. With 3 kilometres to go there was an attack from Pogačar. Carapaz, Sepp Kuss, Vingegaard and Enric Mas reacted to the Slovenian’s move. 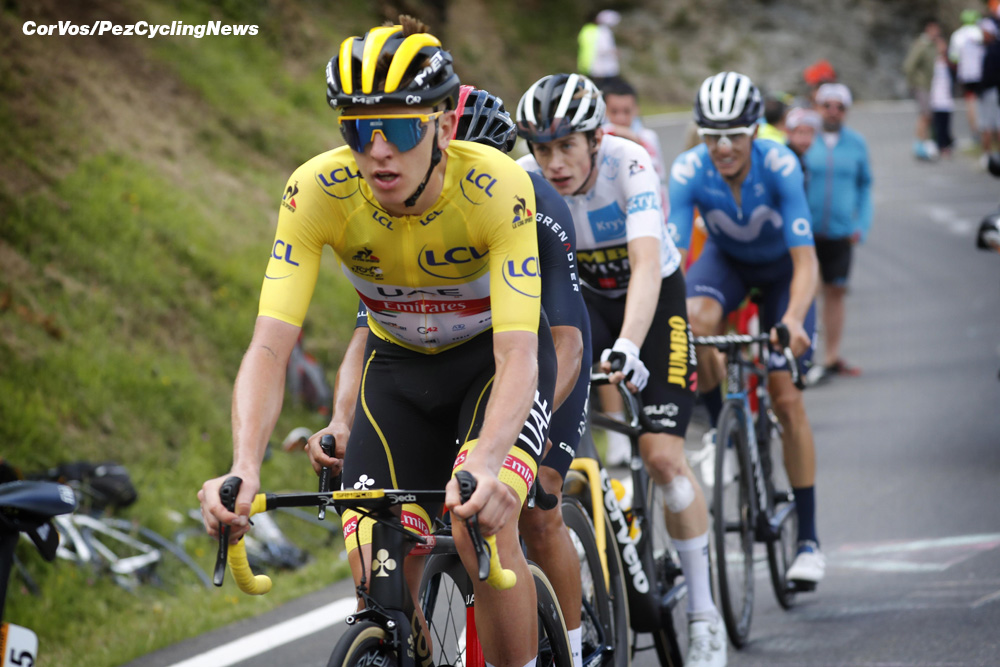 Kuss then took the lead in front of his teammate Vingegaard, but it was Mas who decided to jump away first in the last kilometre. The attack turned out to be too much for Kuss, but Pogačar, Vingegaard and Carapaz were able to catch the Spaniard without any problems. This turned out to be the moment for the yellow jersey wearer to show his strength and the (probable) 2021 Tour winner finally rode away from Carapaz and Vingegaard after a second acceleration. For Pogačar it is his third stage win in this Tour de France. 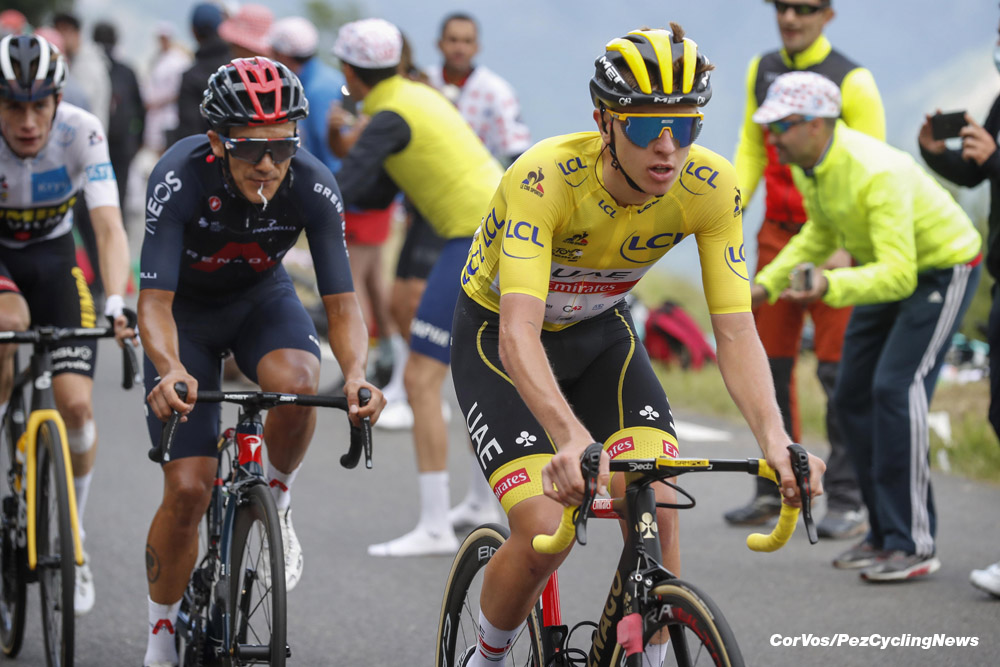 Wilco Kelderman managed to limit the damage on the final climb and crossed the line in ninth, 34 seconds behind stage winner Pogačar. In the general classification, the Dutchman moves up to fifth place as Ben O’Connor jumped fourth.

Stage winner, overall leader, best young rider and KOM, Tadej Pogacar (UAE Team Emirates): “It’s unbelievable. After yesterday, today I felt good. I’m really happy with the win. It’s crazy. Cycling is a game for me since I started. I’m enjoying playing it and I’m super happy. 50% of the victory in this Tour de France is already mine – you never know! There are some stages left, but it’s good. Why should I be worried about Vingegaard on the time trial? It can happen that I lose six minutes on the ITT – let’s hope not! It’s a discipline on which I always give my 100%. It will be a new experience [to ride an ITT in the yellow jersey] and I can’t wait to do it. The stage today was super hard. The pace was really high already in the Tourmalet. I kind of forgot about everything to focus on the last climb and to give my maximum all the way to the finish.” 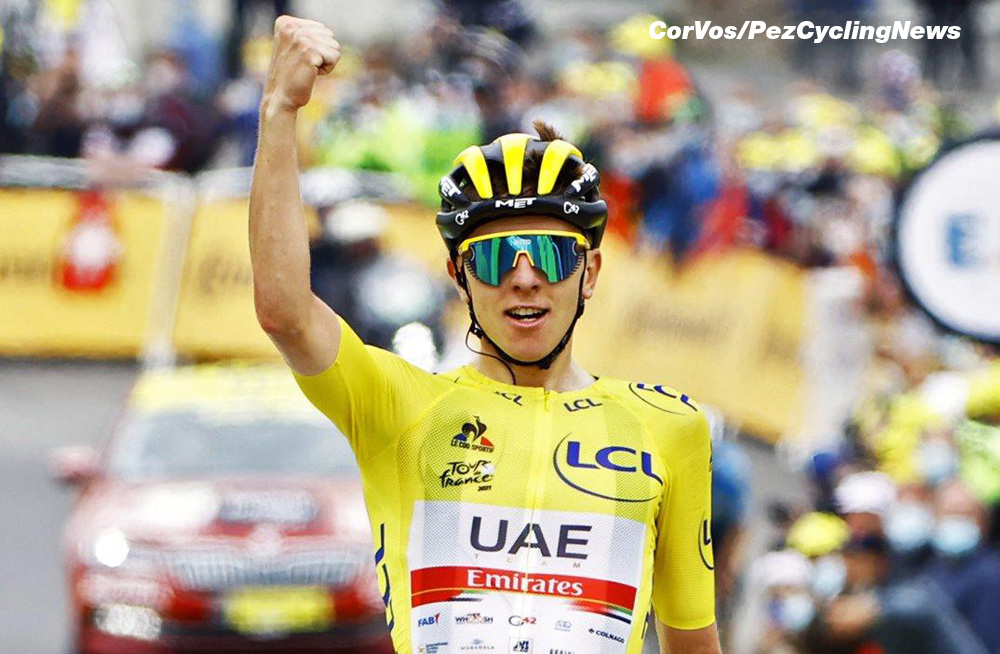