Trackside Ed: Part 2 of Ed Hood’s Rotterdam ‘6 Day’ adventure brings the curtain down on the Dutch track extravaganza. It’s not only the riders who are feeling tired as the race comes to an end – More coffee is needed in the track centre to get through the final three days… And Bremen here we come. 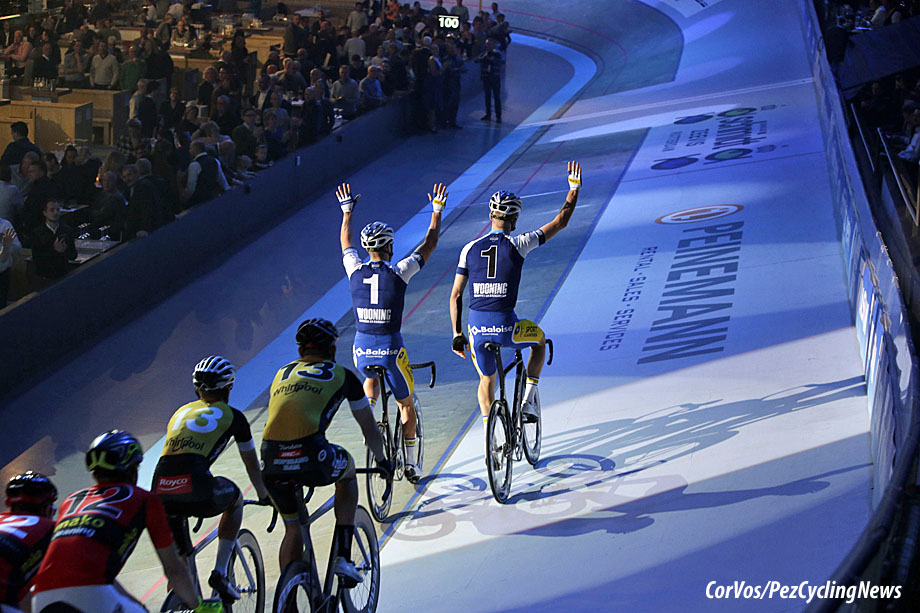 Kris heads straight for breakfast from the camper but I’m not man enough for that, I need the shower to bring me to life before I can face Rotterdam Day Four. 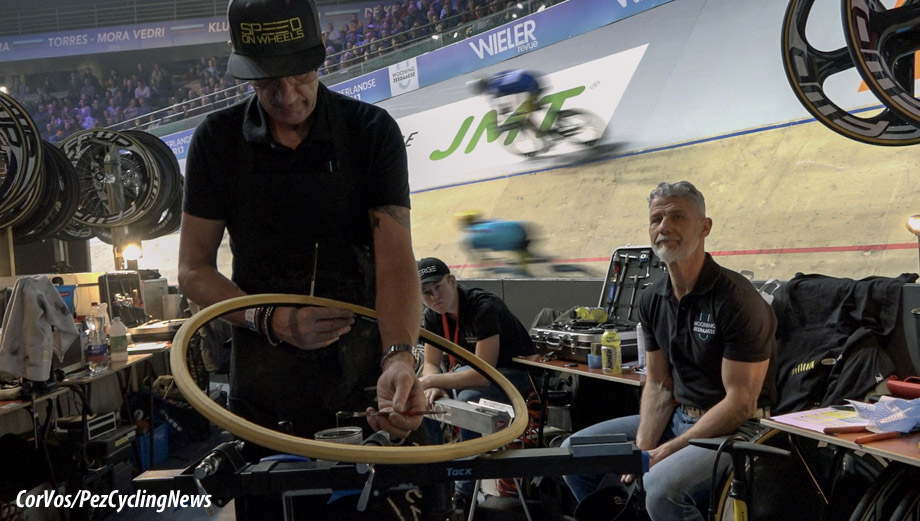 Sunday is an ‘afternoon only’ day with a 1:00 pm start and 5:00 pm finish but we didn’t get to bed ‘til gone 2:00 am so when the alarm blasts on Sunday morning, it’s painful. Duly showered and first coffee downed things start to look better though. Whilst it’s no walk in the park, the Sunday racing is never quite as savage as the other days. 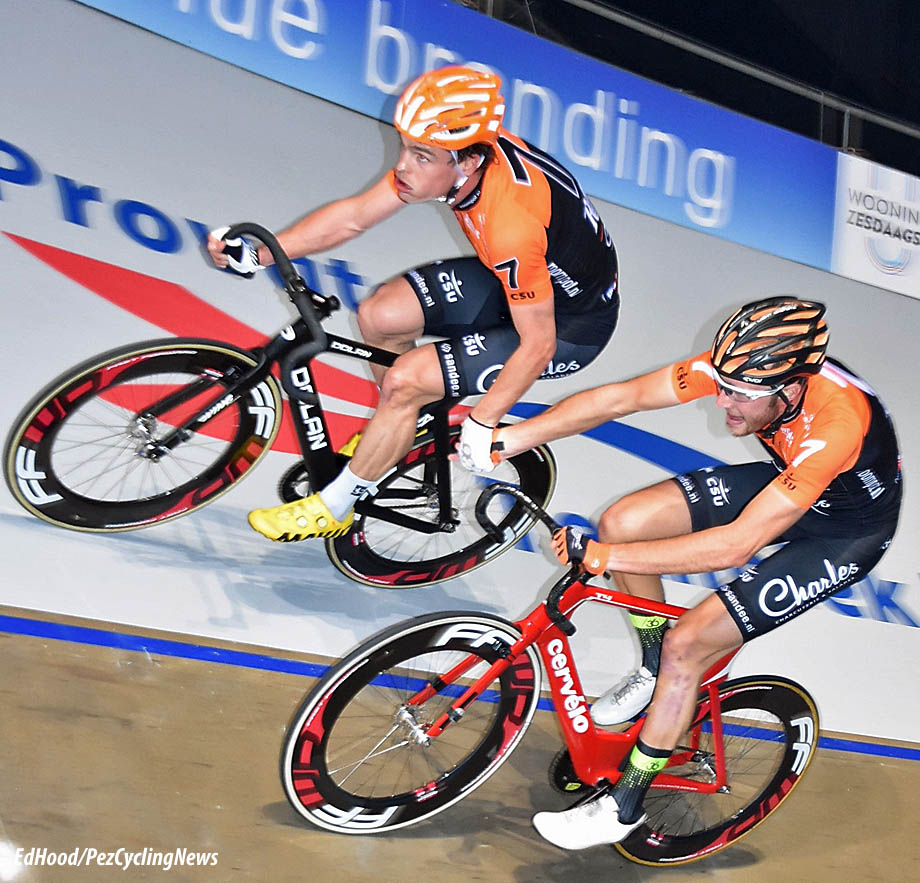 Steels and Van Schip carry on where they left off on Saturday night and win the first chase of the day. Sprinters next and Theo Bos is back to his roots and dicing with the body builders in the sprints – Bos was pretty successful on the road with stage wins in the likes of Castilla y Leon, Oman, Poland, Denmark and Turkey plus single day success in Drenthe, Tour of North Holland and Ronde van Zeeland Seaports but never really broke through to take the Grand Tour stage wins he had hoped for. Bos took bronze in the kilometre Worlds last year but sprinting against the team sprinters here he has little chance – but he’s a ‘name’ and the crowds like him. 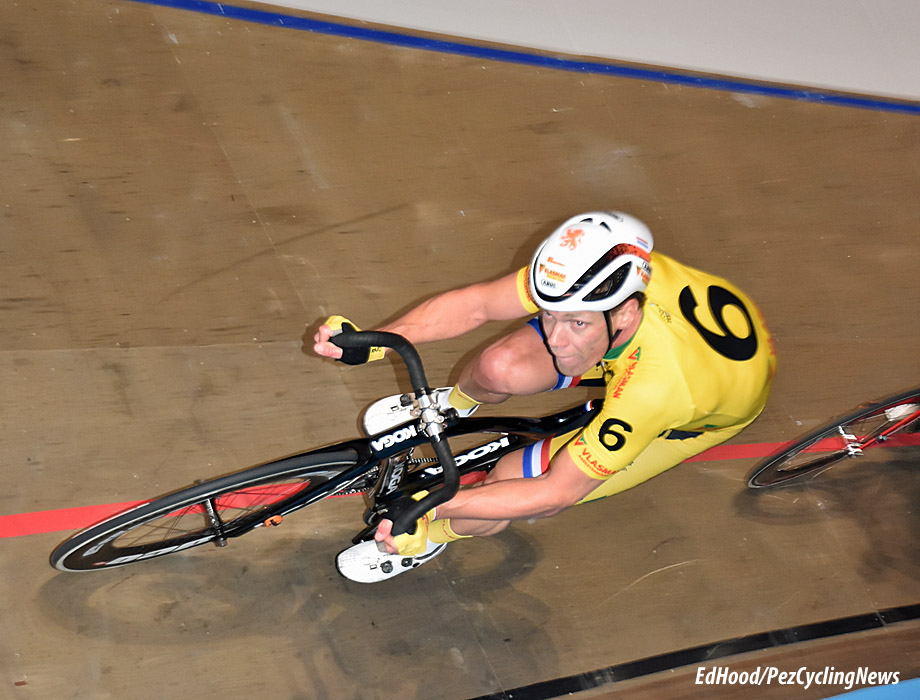 Wim Stroetinga wins the devil and Moreno De Pauw the Derny. Moreno and Kenny De Ketele were an item on the boards until earlier this year when Moreno’s form took a down turn so the federation paired Kenny with young Rob Ghys. 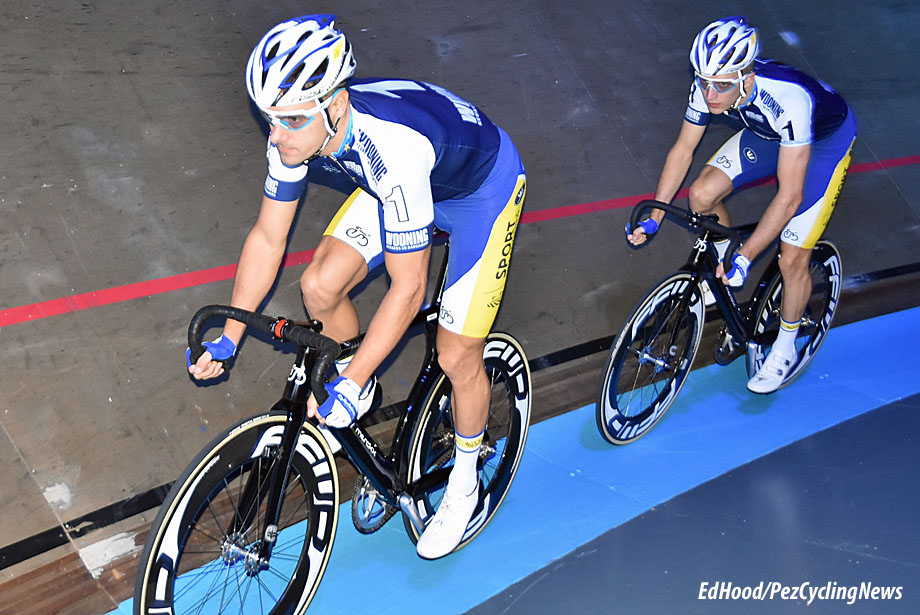 The duo duly went out and won the European Madison Championships – fait accompli and Moreno must now ride with others. Tempo race – let’s gloss over that one… 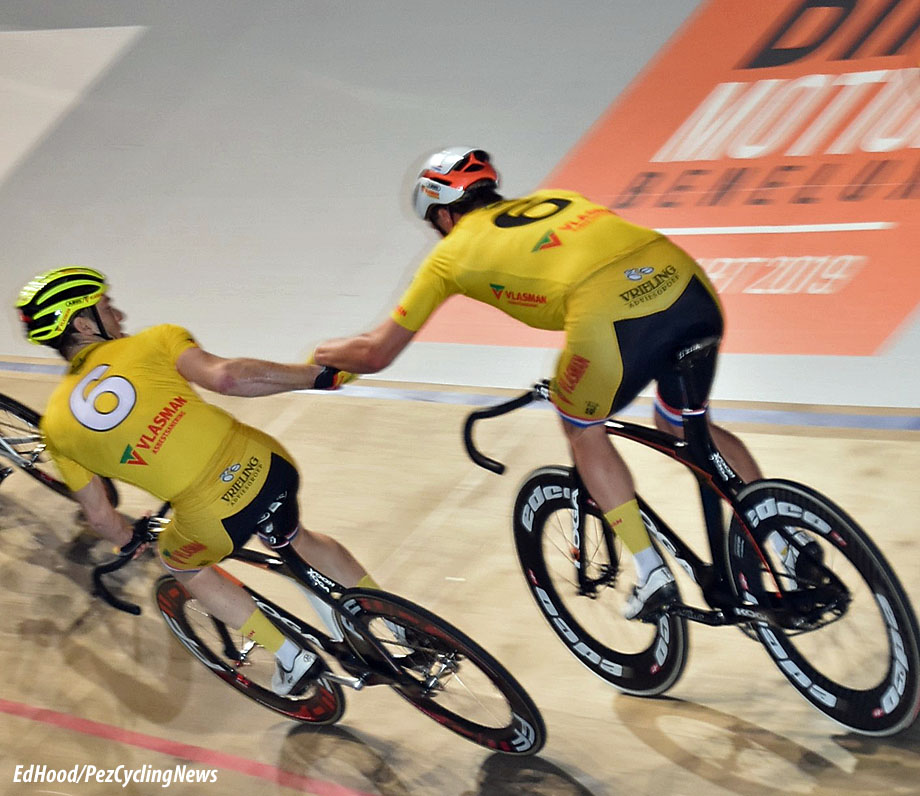 More Dernys then the big chase which isn’t too savage, it’s Sunday after all – Yoeri and Wim please the crowd. I’m on holding up duties in the team sprint – which the home squad of world champions win for the fourth night straight. How can three guys from three different nations hope to defeat the finely tuned world champ machine? There’s simply no chance – so why not give the ‘European’ boys a start? Handicap it and make for closer racing – but I’m just the runner… 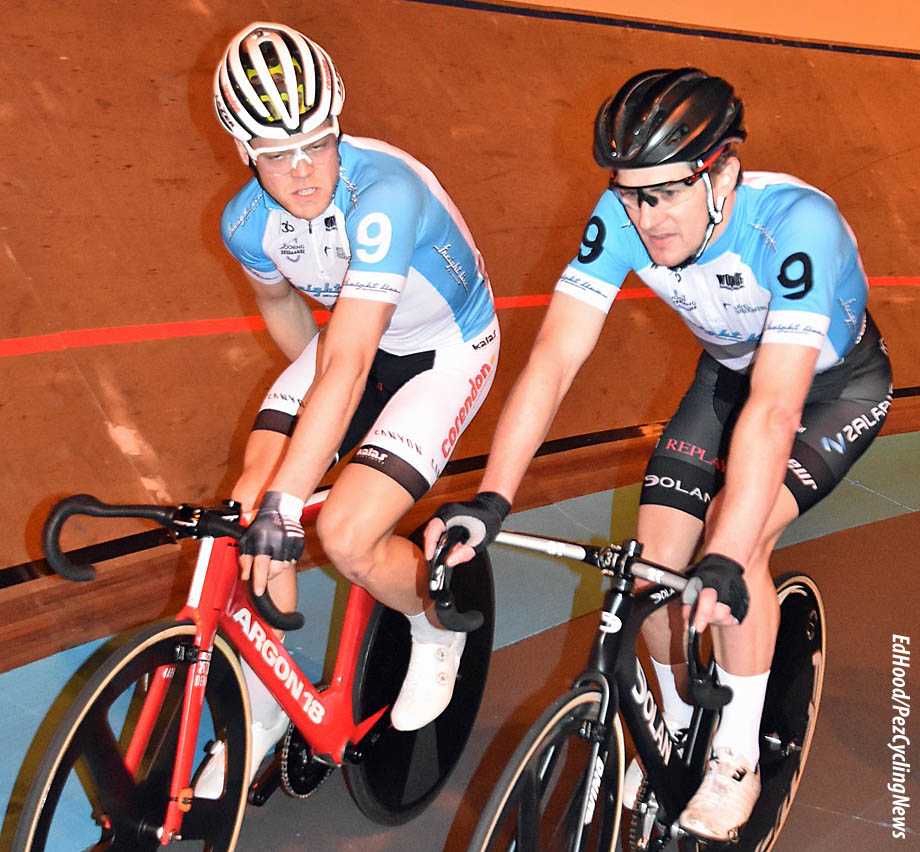 ‘Danish Dynamite’ – aarrrgggghhhh! – win the points race then it’s time for the u23 elimination. 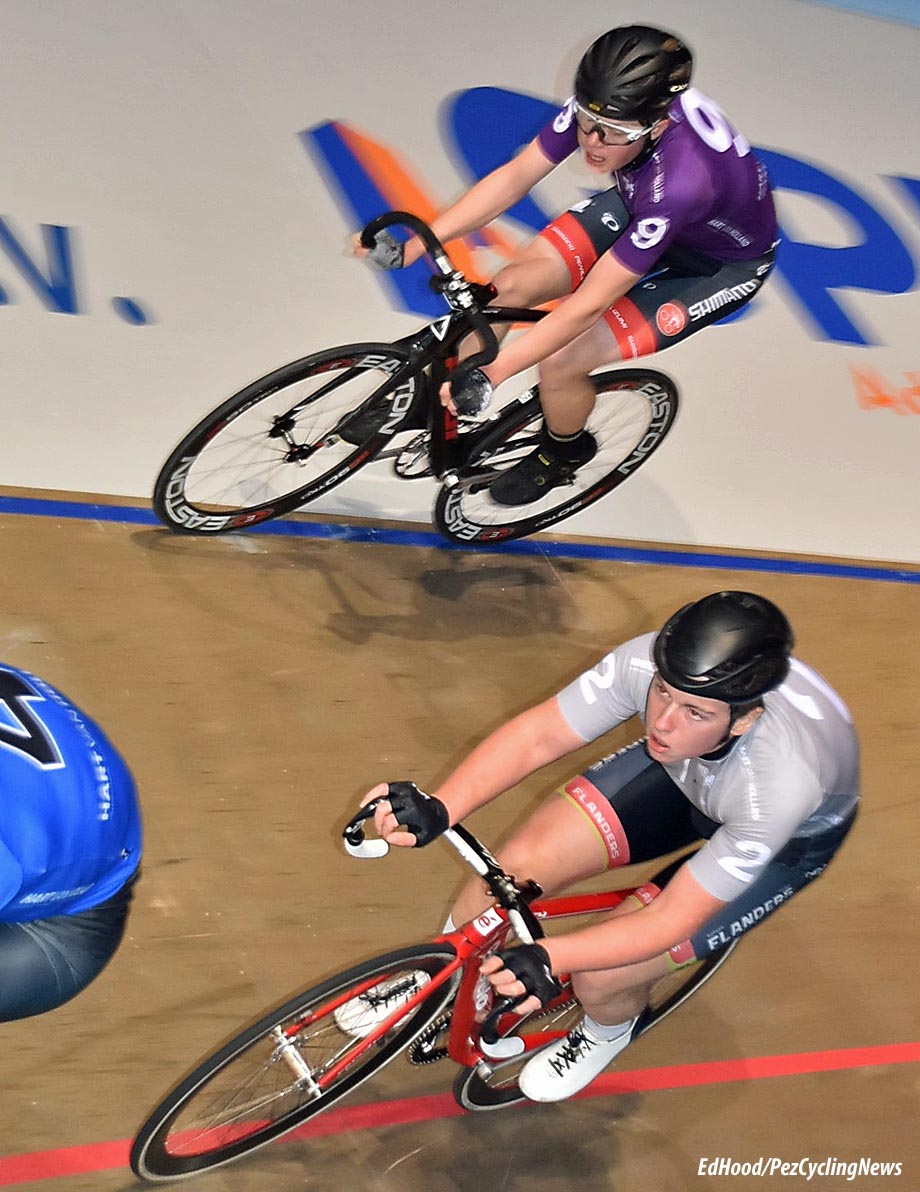 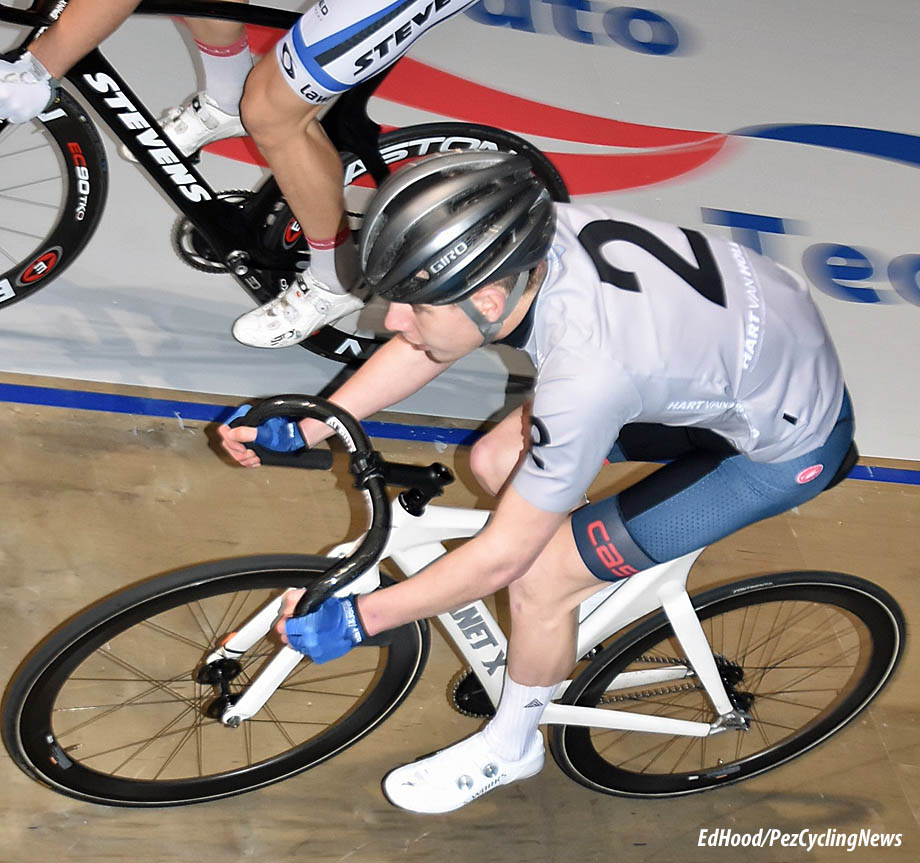 GB boys Rory McKay and Louis Bilyard are here under their own steam but having a bit of a torrid time against top opposition; riders like Austrian Moritz Augenstein, a seasoned campaigner on the winter boards. I trotted over to get some snaps before Louis was out early in the devil. To close we had the ‘super sprint’ a points race/devil mongrel – I can’t remember who won, sorry. After that it was a mad rush to get changed for the meal at the hotel that’s a Sunday night tradition. But not for us – toasties – there are pictures to edit and a keyboard to tap…

Day 5:
With just four minutes to go in the big chase it looked like De Ketele and Ghys were going to win the chase and take the lead – until Lady Luck dealt them an ace of spades and Kenny – the most capable and experienced man on the boards – came down hard. 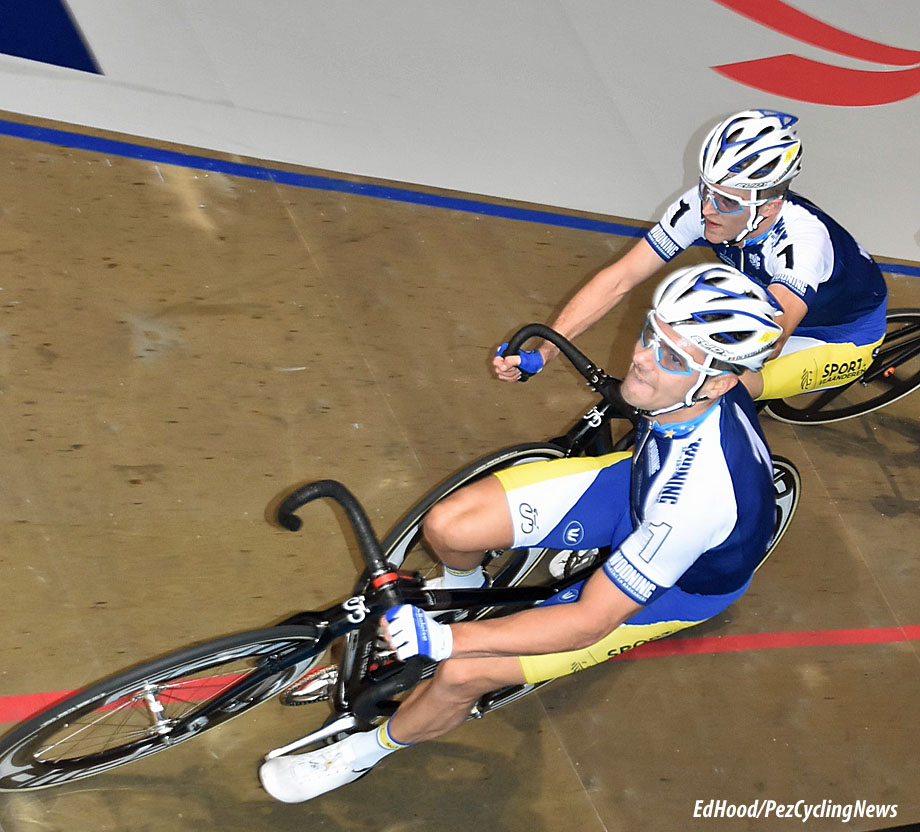 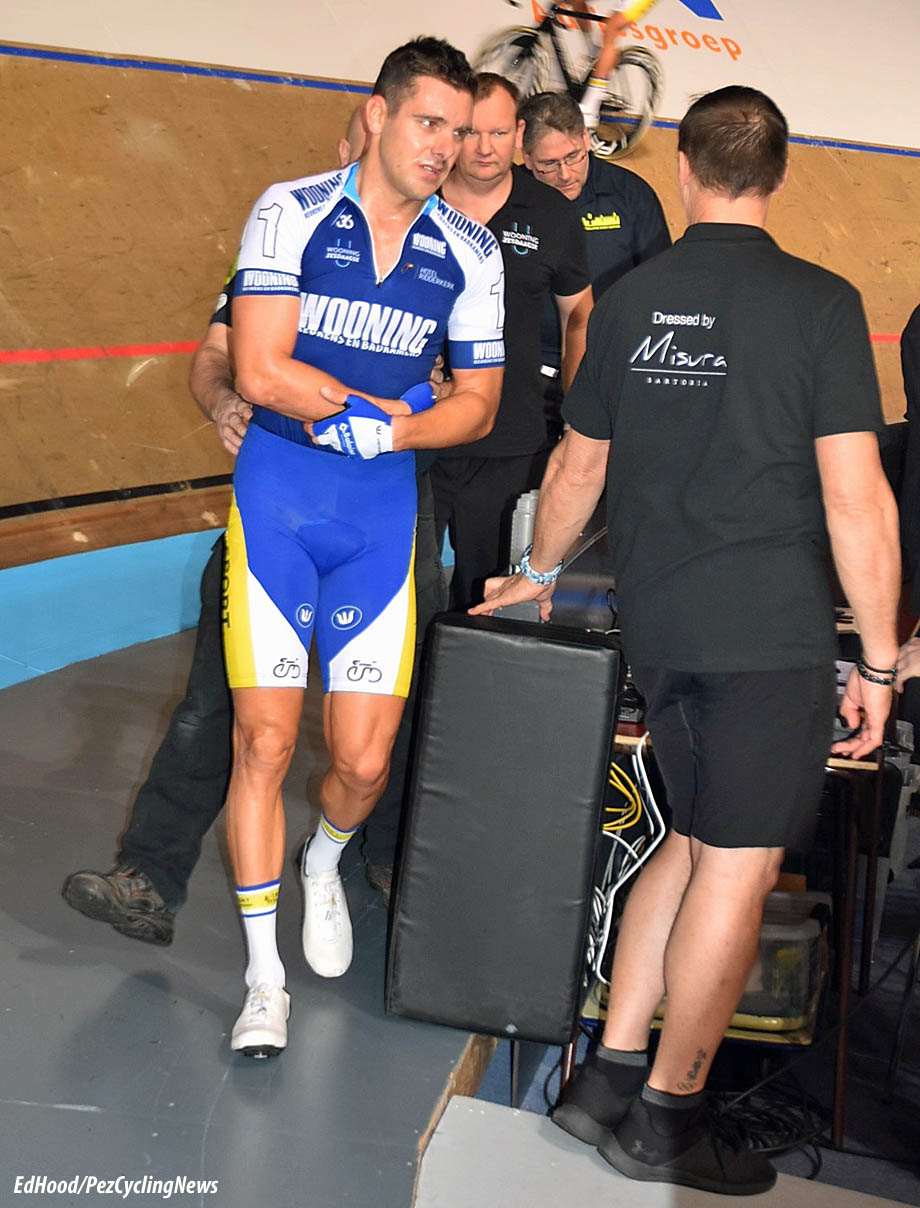 Verdict: broken collar bone. Rob Ghys then partnered with our man, Wojciech to make a new team – but six day madison new rules puts them five laps back, a podium is unlikely. 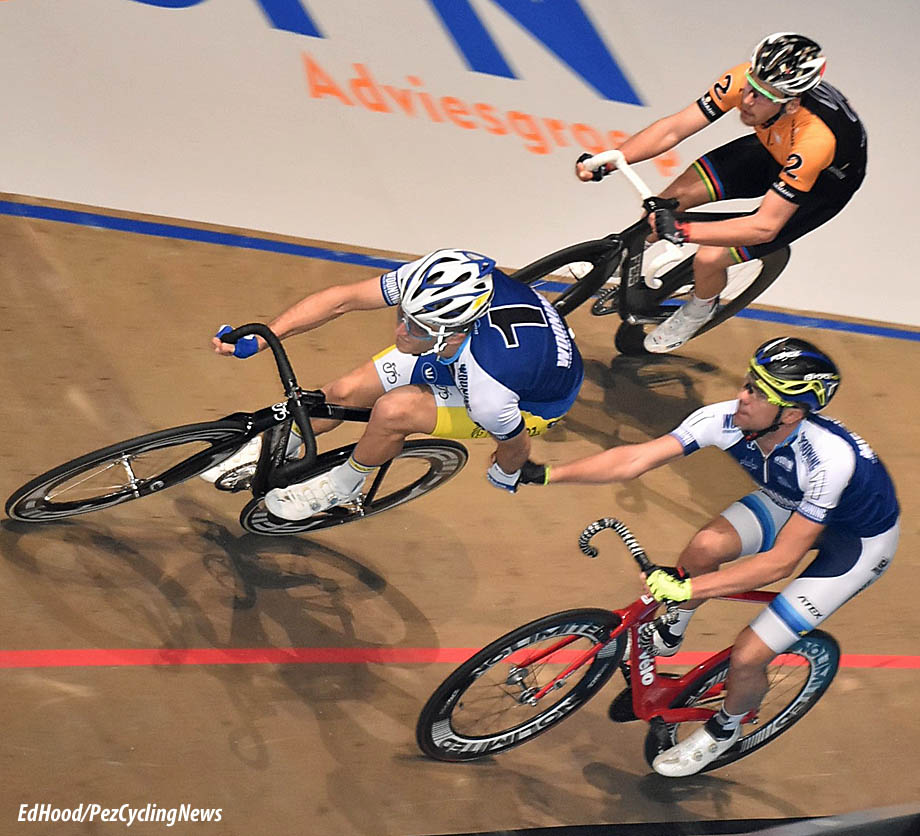 Wojciech’s partner, Daniel is currently out of the race too with a badly inflamed gum; last time we saw him he was headed for the hospital. Six days are bitches – and then you crash… On the ‘up’ side, coffee is free for us in the track centre and it’s not bad at all – a trip out to the bar lets you savour the v.i.p. ladies’ perfumes – a lovely contrast from ‘eau de coureur’ over in the cabins. And at the bar you’re sure to find ‘Boogie,’ Roompot DS and former Amstel winner, Michael Boogerd. 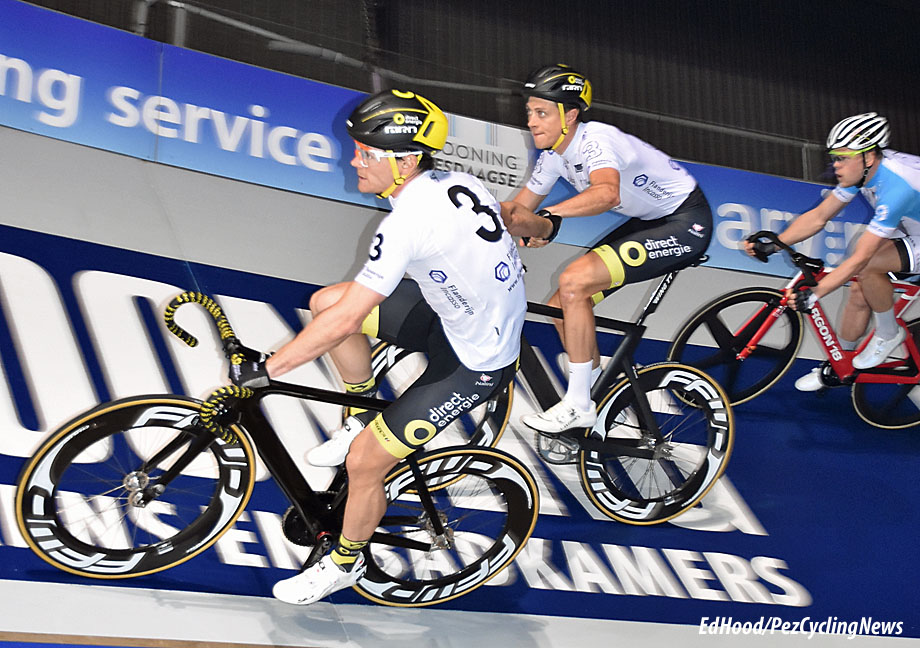 The first chase goes to Messrs. Terpstra and Boudat with the little Frenchman not looking nearly as strong as the big Dutchman. 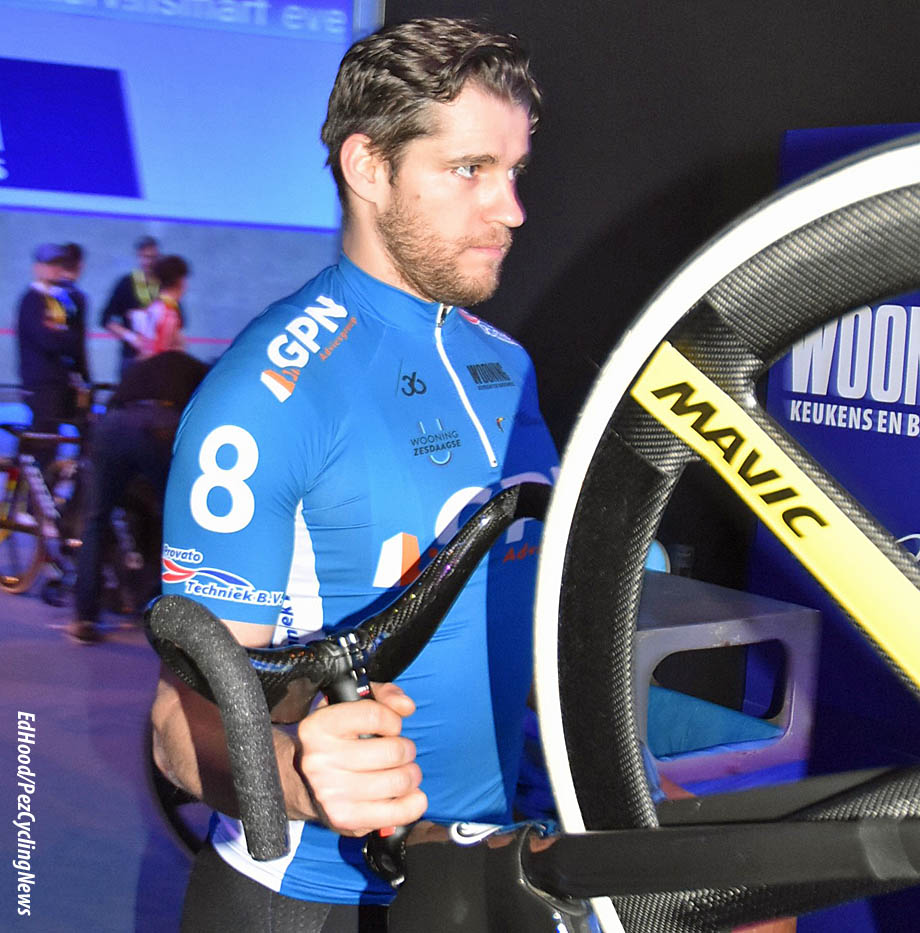 Theo Bos is up on the boards again tonight but must have ‘had a word’ with the organisation, he gets two wins and brings the crowd to life. Derny one to Niki and Lavreysen qualifies fastest for the sprint – 10.2 on this tight track, pretty impressive. Roy Pieters, son of former Dutch National Pro Champion and Paris-Tours winner, takes the tempo race. 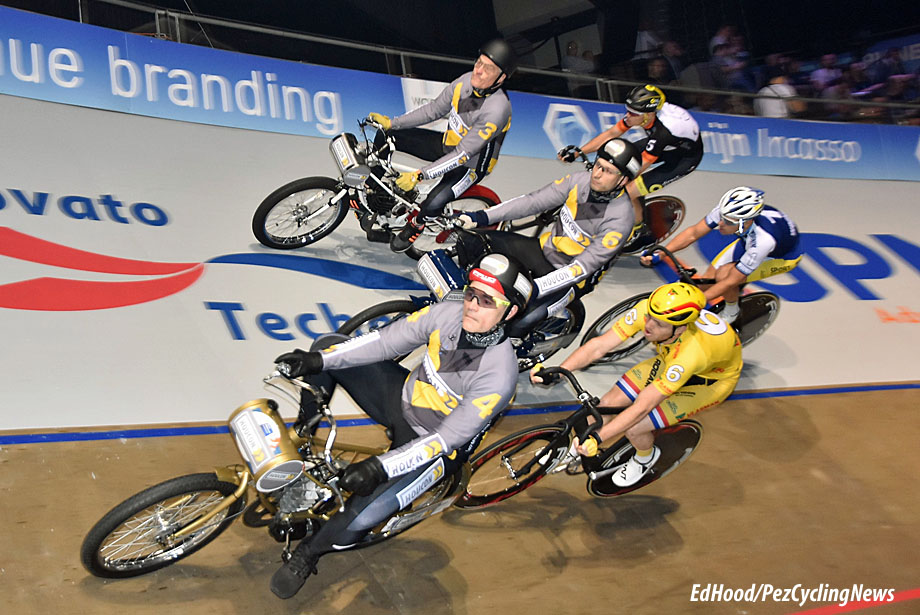 Derny two, I take pictures of all the riders – except the guy who wins – Theo Reinhardt. More sprinters then it’s big chase time. Ironically, an upset Rob Ghys takes the laurels as winner whilst poor Ken get carted off to hospital – the race effectively ended when Kenny crashed. 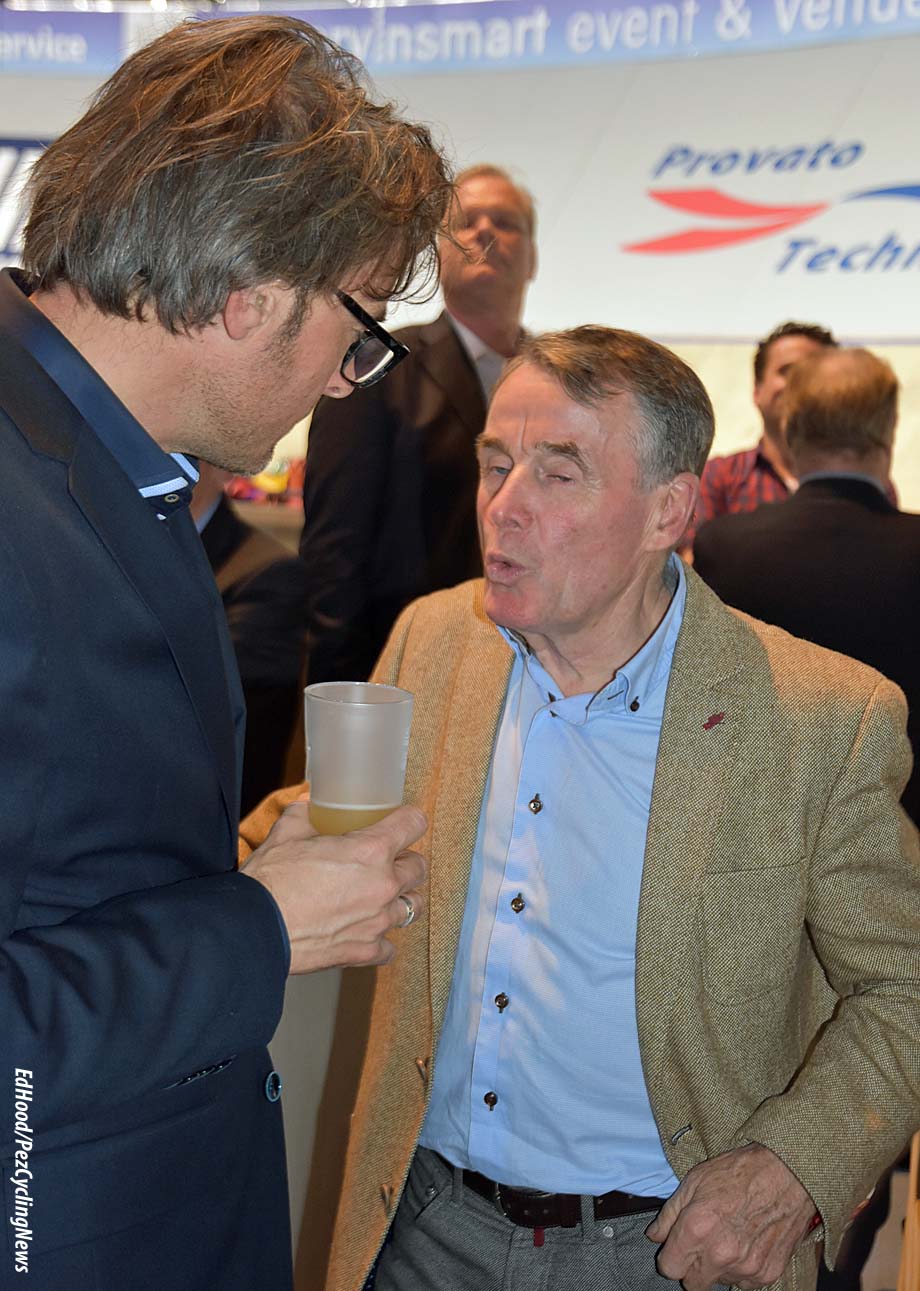 And in the ‘old guys who only saddos like Ed remember’ file, we had a visit from Dutch cycling royalty, Hennie Kuiper – Olympic and World Champion; Primavera, Flanders, Roubaix and Lombardy winner. Respect. One more day to go, last washing tonight so ‘mustn’t grumble’. 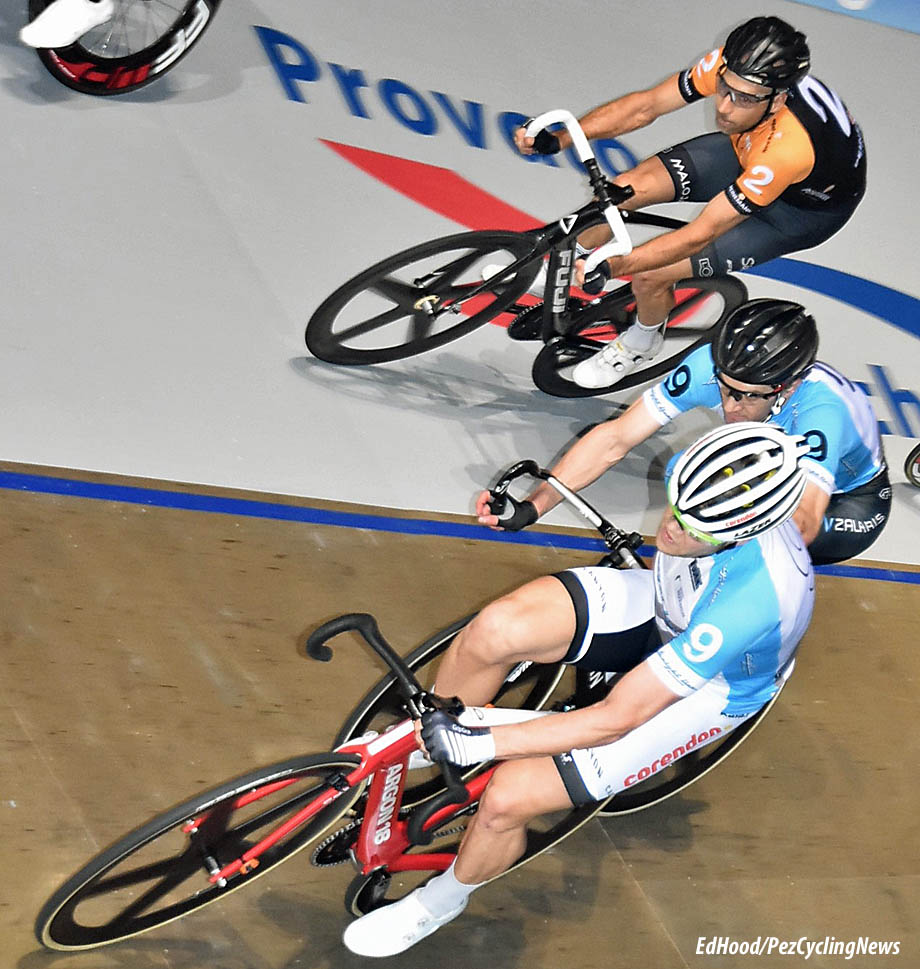 Day Six: The Danska Duo still lead, Woicjec is still with Rob Ghys, it’s a big house, the tunes are good, the scene is set. 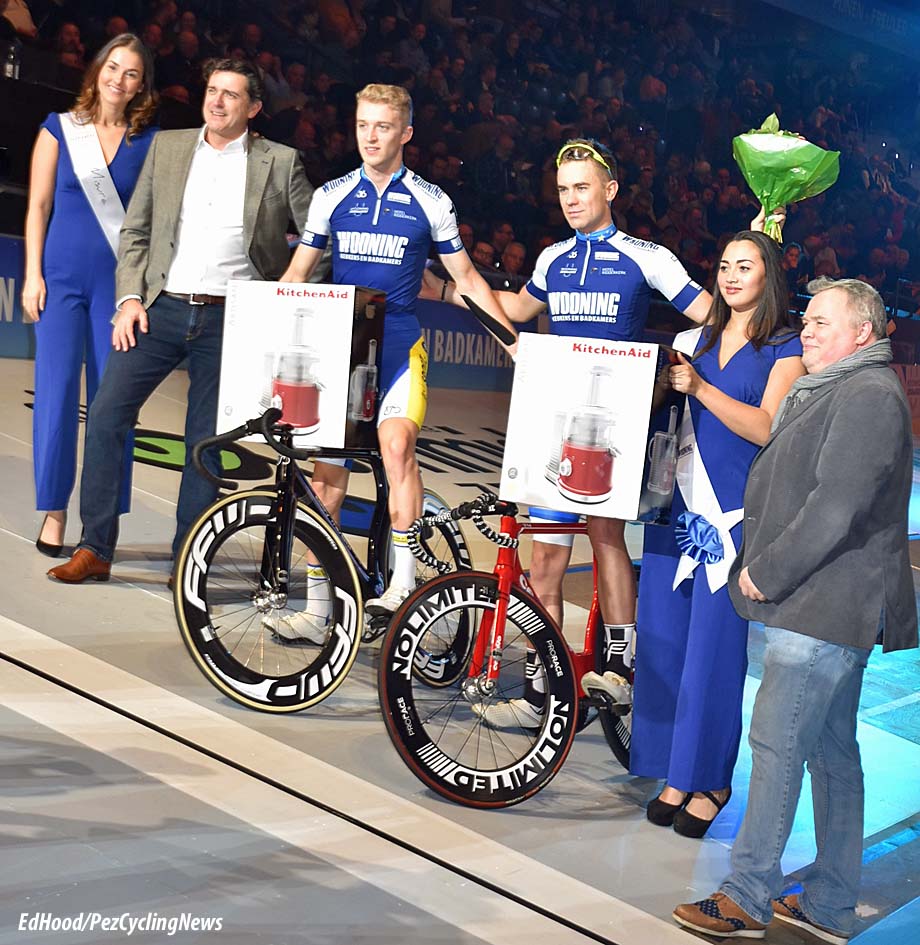 Team points race – we win, with Scotland’s very own Fratellis the backing track. 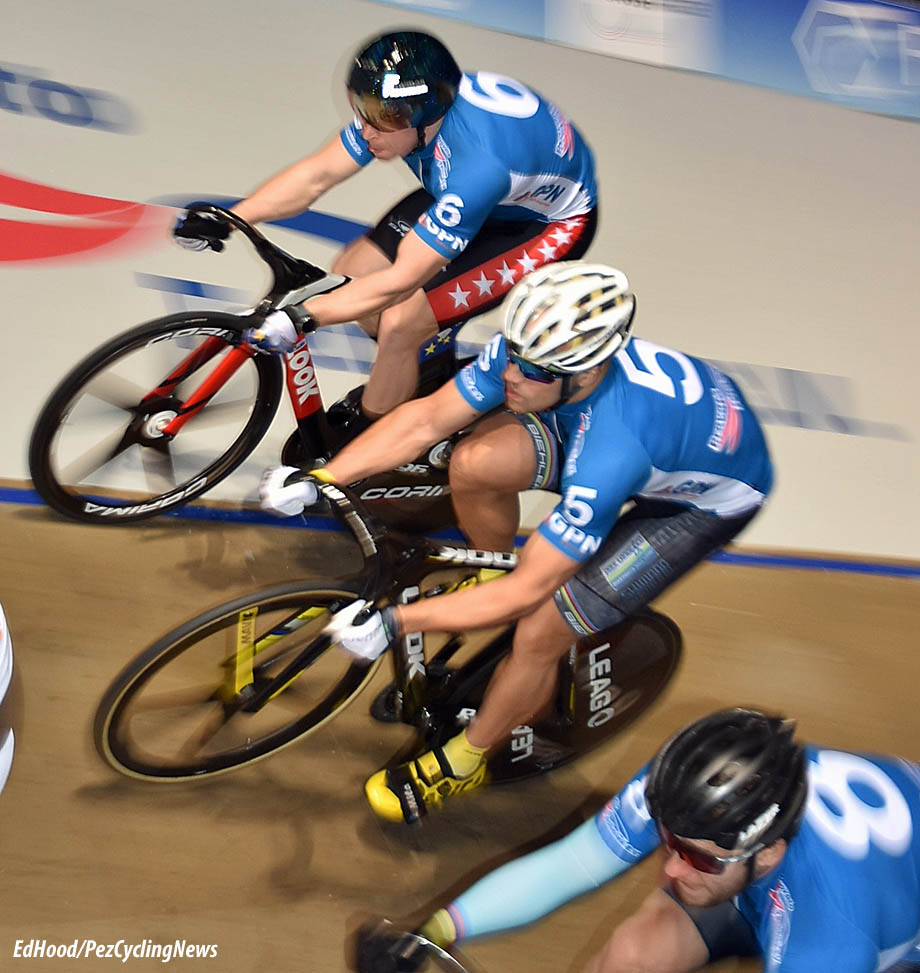 Keirin – Thomas comes over everyone to win; he’s a cool guy, former European Champion in the discipline and has raced the keirins out in Japan. He may go back this year but isn’t sure – all that building up and stripping down of your bikes ‘by the numbers’ he finds a little, ‘beaurocratic’. And whilst the prize money is good, so are costs, like 200 Euros/day for a translator – no one speaks anything except Japanese. Not a bad start to the evening for us though. 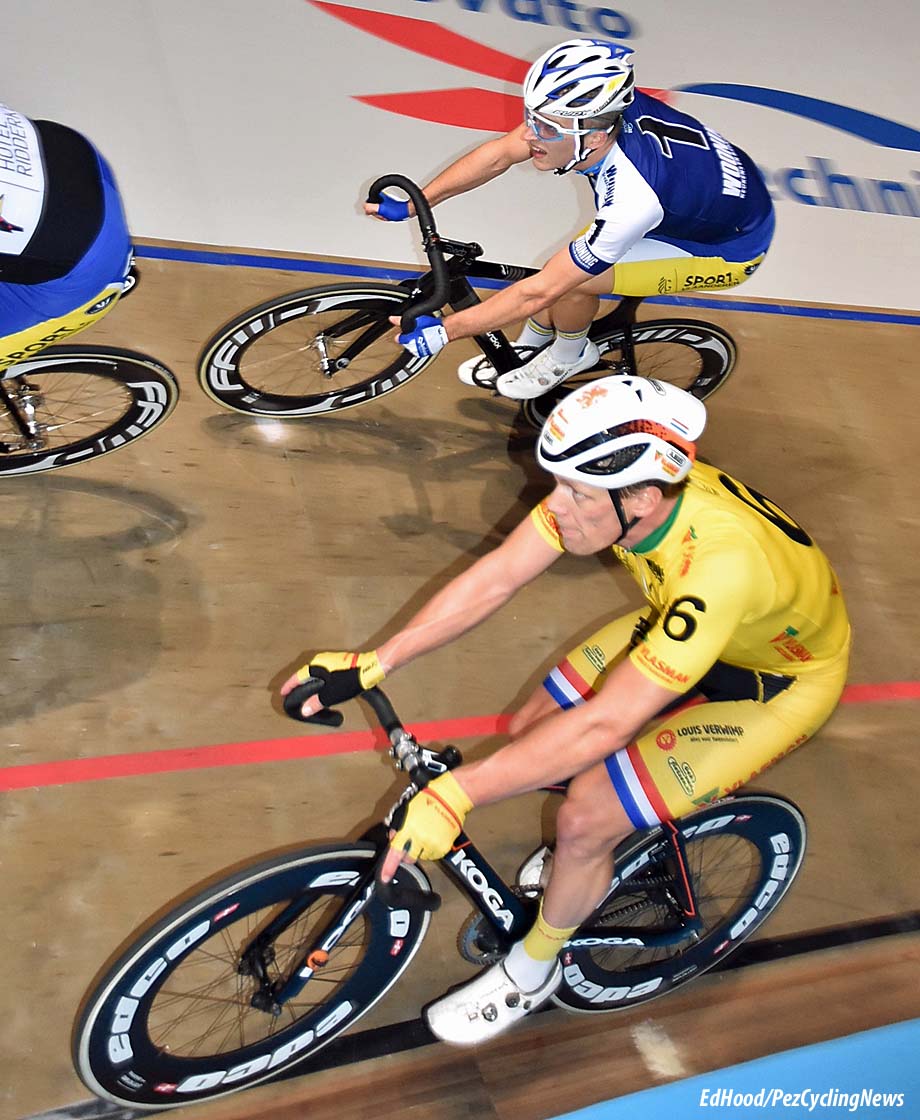 Havik and Stroetinga take the flying start one lapper – Wim’s looking sharper tonight. Body builder time again and Lavreysen breaks the track record: 9.906 – wow! Trouble is that this is a temporary track, it’ll be in containers by tomorrow morning, so you only get a shot at that record for six days each year.

“Ah! Ho! Ho! Ho!” chortles the speaker as young Zijlaard takes the last sprint in the team devil – tonight is all about the big chase so no harm in a young local lad grabbing some glory. Team sprint time and I’m allowed out of my hutch to hold up big Thomas in the back straight. The World Champs in the home straight win again – that’ll be 6 to nil then. Round in the back straight you get a proper impression of the crowd; it’s a good house for sure. 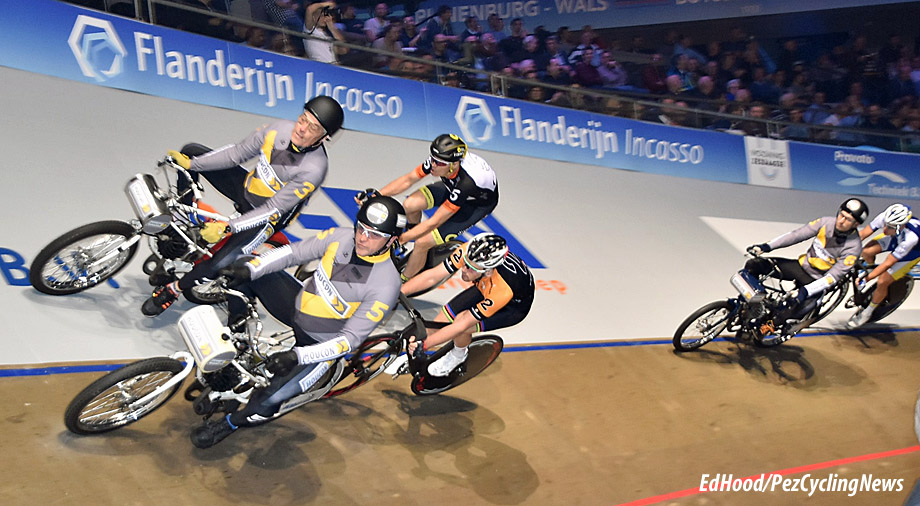 Derny two but I didn’t jot down who won; they were playing, The Mavericks, ‘Dance the Night Away’ – I’ve never considered line dancing before but with the mega bass of the PA, the noise of the Dernys and that two stroke aroma, well… Young Zijlaard takes the Derny too – Ho! Ho! Ho! Then young Hesters (that’s the young Belgian one, with an ‘s’ on the end) takes the “super sprint” – a kind of points race/devil mongrel. Final pees, schuck a gel, maybe a loosener on the rollers? 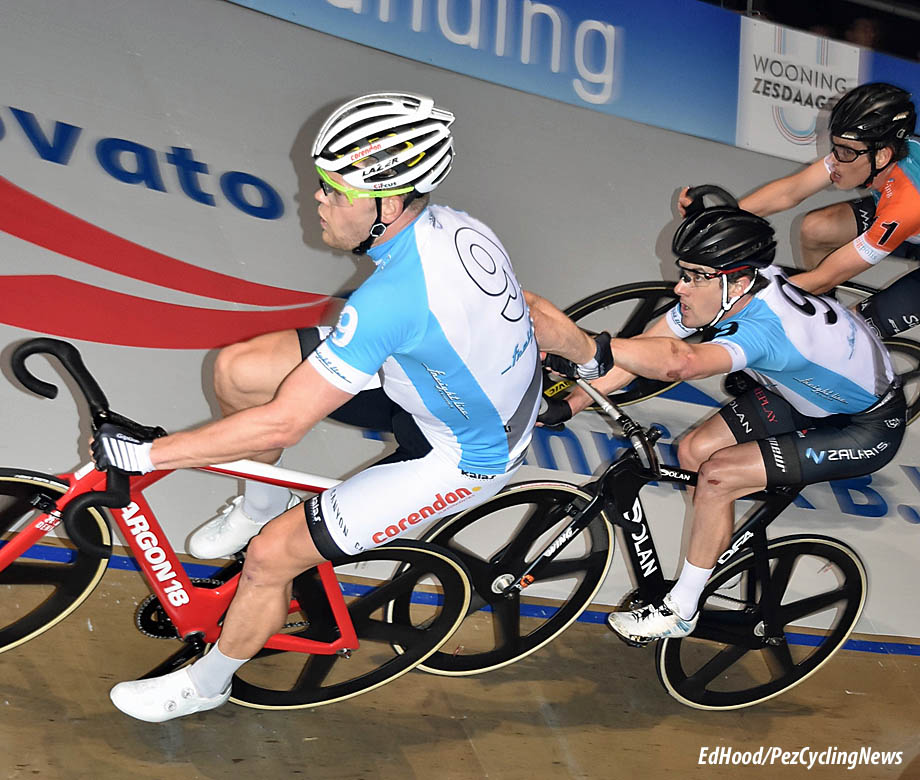 The Danes are strangely subdued, Wim and Yoeri make a fist of it but it’s Niki’s night. Boudat is clearly suffering but will no doubt prefer that to the ‘wrath of Terpstra’. 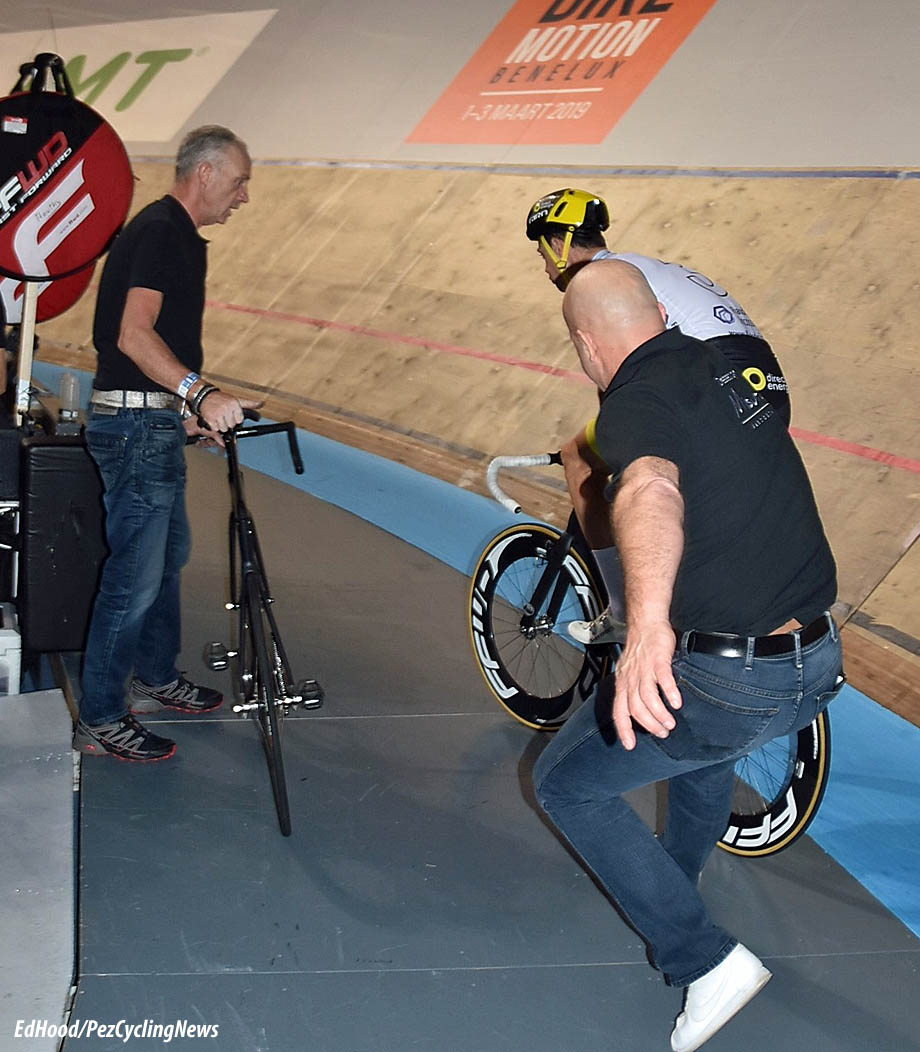 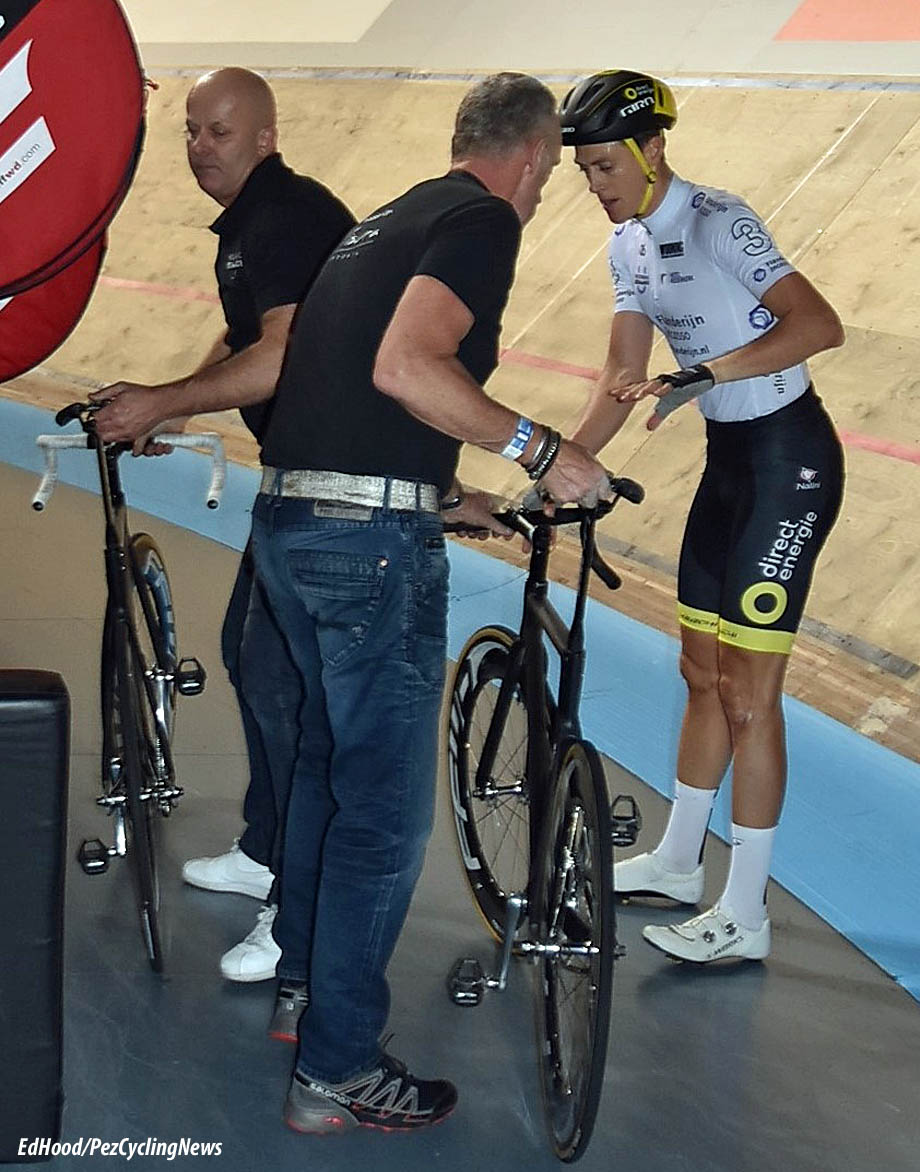 Despite a late bike change the big Dutchman and his little French partner take the laurels. 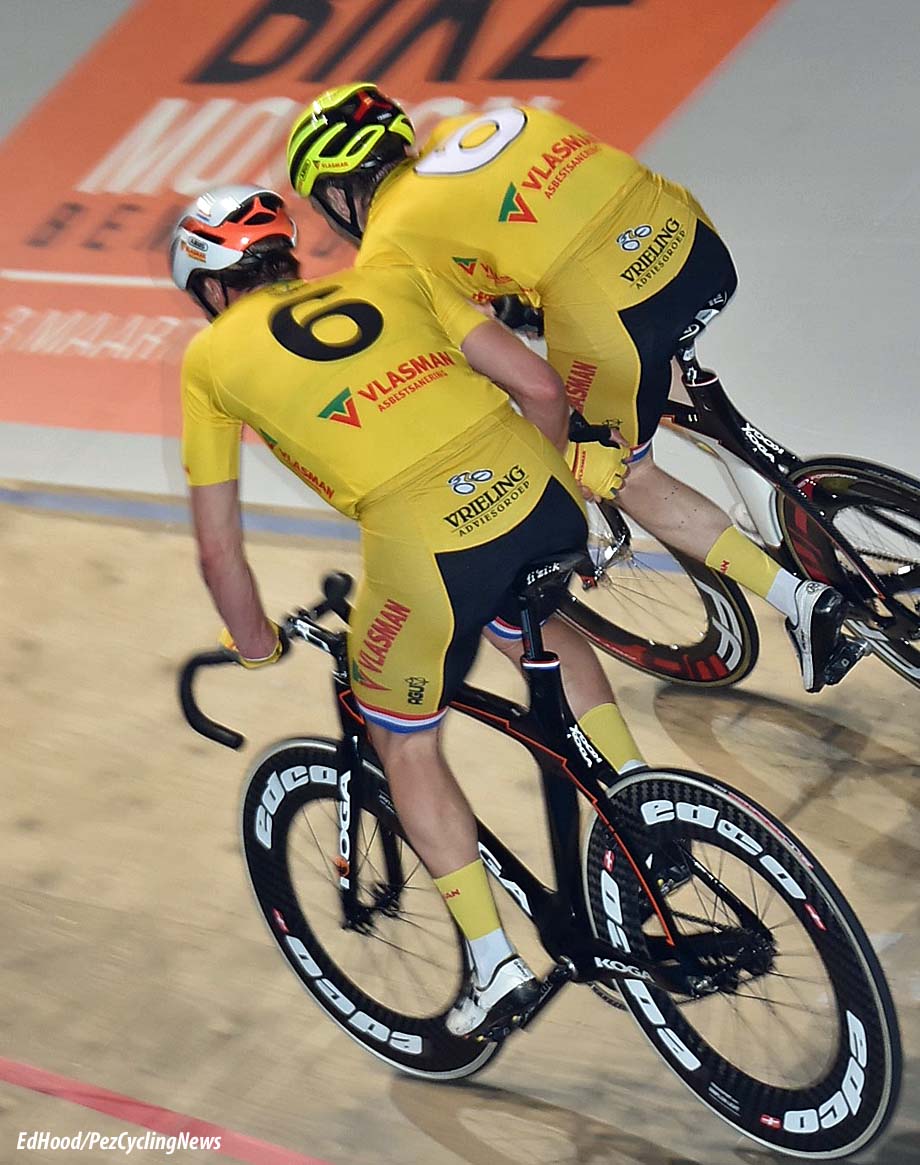 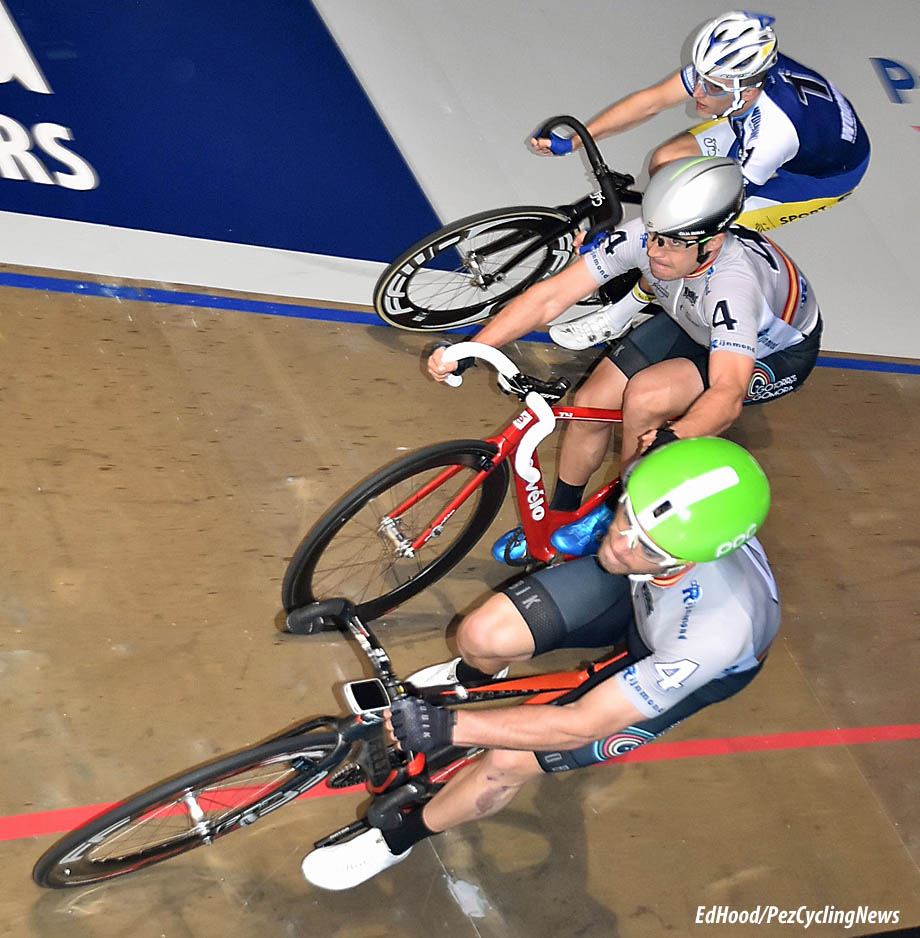 And if there’s any doubt about the legitimacy of that result then I’d refer you to a big attack the Spaniards and Havik/Stroetinga make. 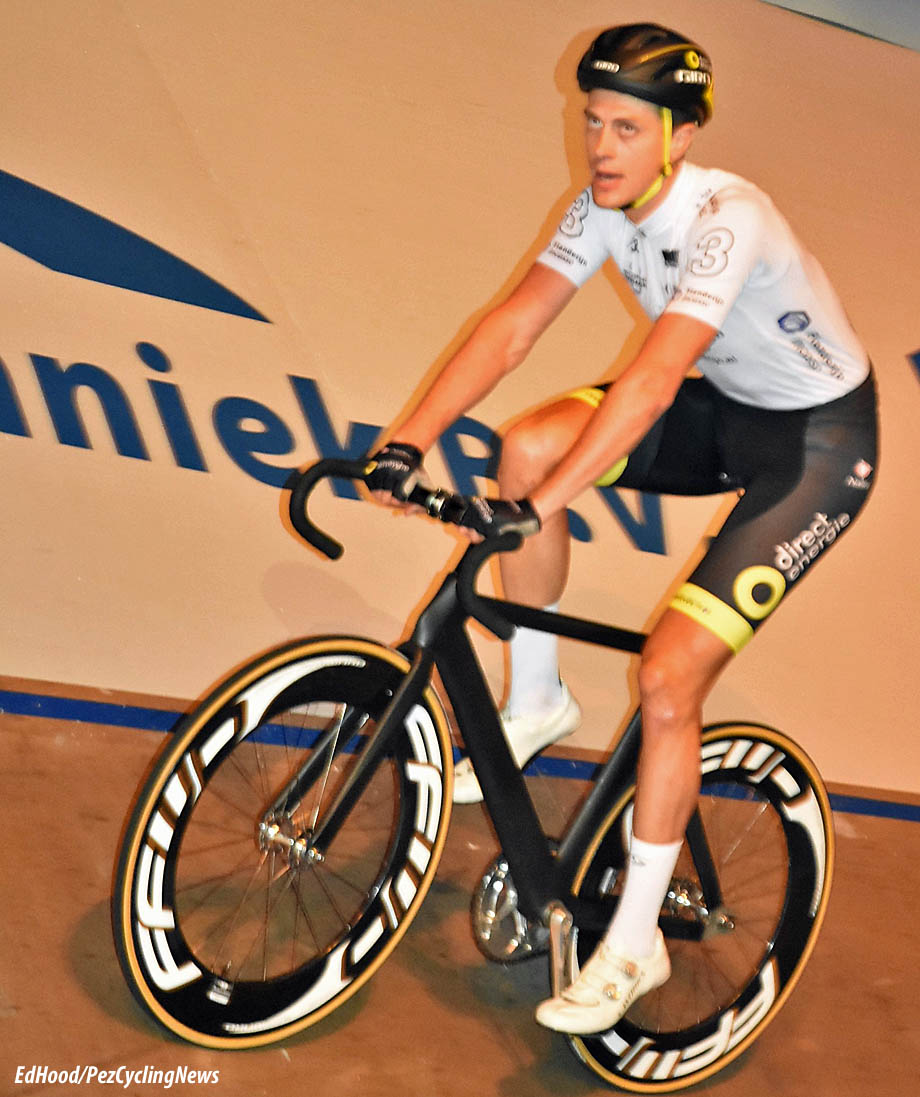 They have a half lap; Niki goes to the front, dumps the nitro and in less time than it takes to type, the gap is gone – so impressive. The Kattegat Kidz are second, Wim/Yoeri third and Woijcech and Rob Ghys fourth – not a bad one for our boy’s palmarès. We lost Daniel with that swollen gum but got fourth, with Thomas third overall in the sprinters standing – and I never dropped him once. 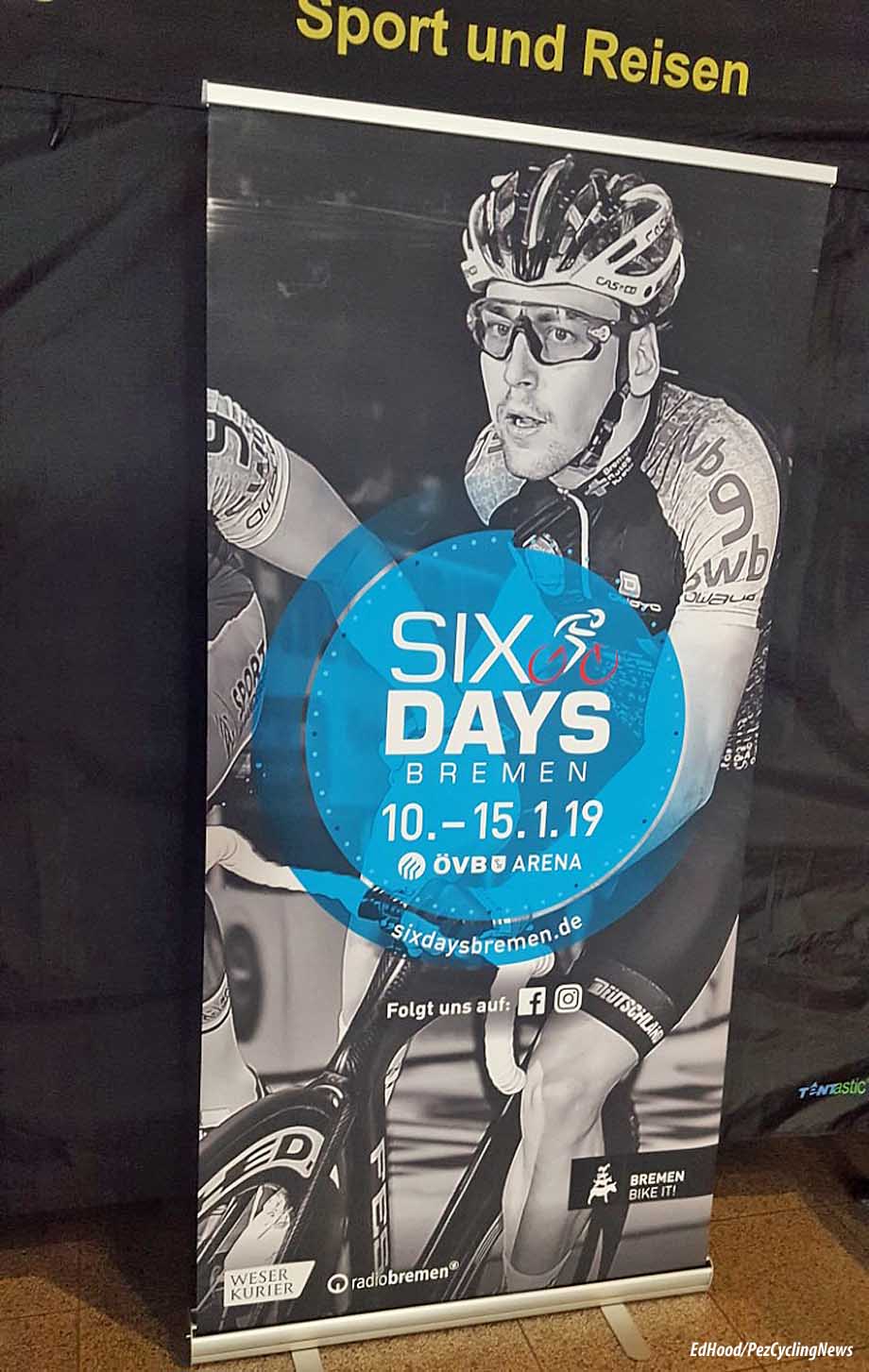 Bikes get stripped, vehicles get loaded; “see you in Bremen”, and “catch you at Kuurne” are the phrases of the night as we head off to pick up the Rotterdam ring road and those long, straight flat roads north to Bremen.