Trackside Ed: Ed Hood hasn’t been working ‘on the boards’ much this winter season, but when a contract for the ‘6 Day’ of Rotterdam came his way, he jumped on it. The first days are never easy, getting all your kit sorted for the battle ahead; Ed takes us though his opening days in Rotterdam. 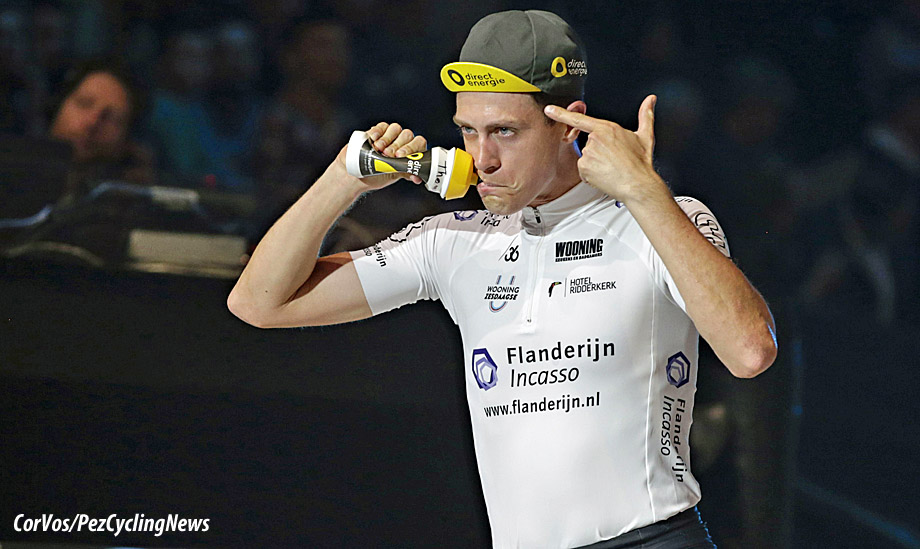 Like Lou Reed said; ‘First thing you learn is, you gotta wait.’ In Lou’s case he’s; ‘waiting for my man’.

Very rarely do you walk into a six day hall and it all goes sweet:
‘You can’t park there.’
‘You’re not on the list.’
‘No cabin, you must share.’
‘You can’t put that table there.’ etc. etc. 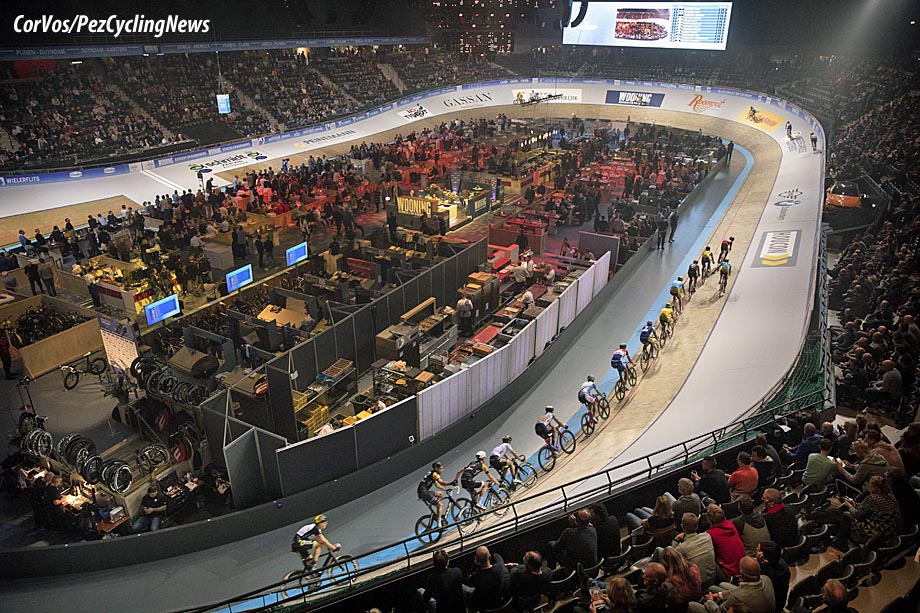 Dutch 15 times former motor paced world champion Bruno Walrave is the man with the plan – and the keys; but he’s, ‘in a meeting. . .

Day One:
Lou Bega’s ‘Mambo Number Five’ throbs out, the place isn’t full but it’s a respectable crowd as Niki puts the hurt on everyone, including French team mate Thomas Boudat. 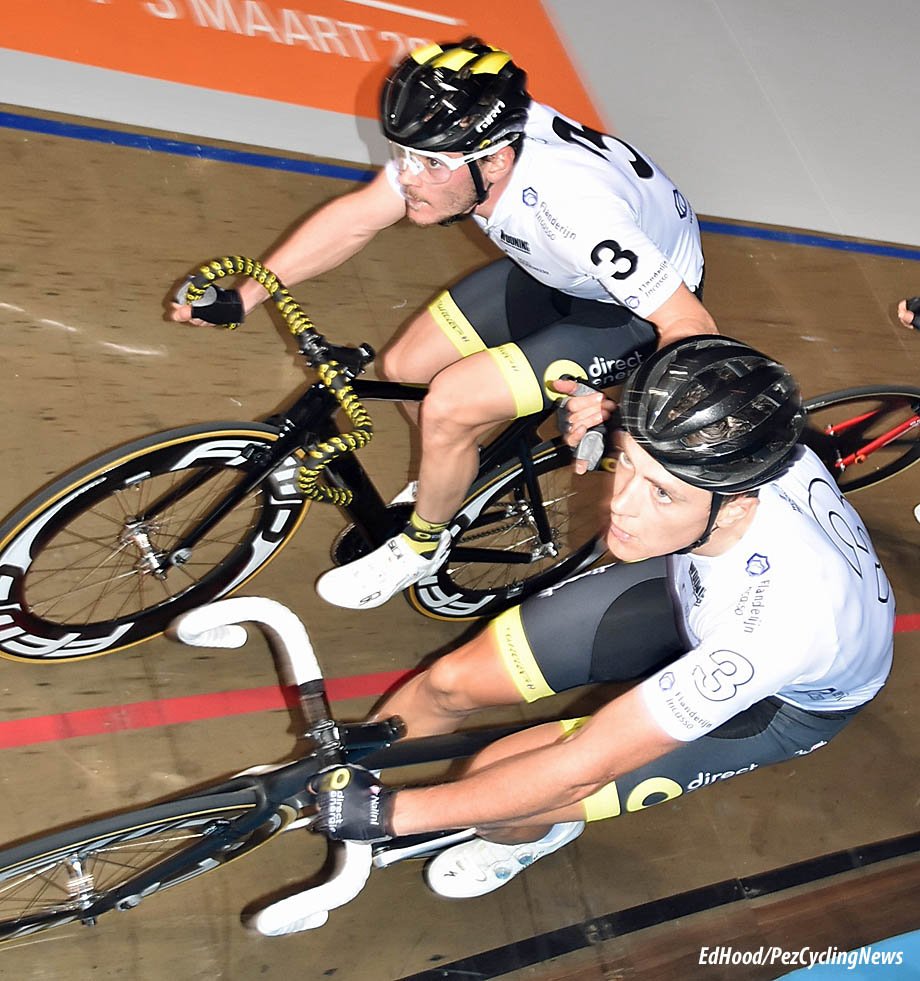 Terpstra and Boudat are team mates now at Direct Energie – and whilst the Frenchman is no slouch with multiple French track titles and a World Omnium Championship to his name back in 2014, whilst 2018 saw him take a stage in the Ruta del Sol and win the GP Cholet – he’s not on a par with Samyn, E3, Flanders and Roubaix winner, Terpstra. But then not many guys on the planet are. It takes a wee bit of time to get used to Niki in his new colours after all those years in blue as a ‘flooring man’. 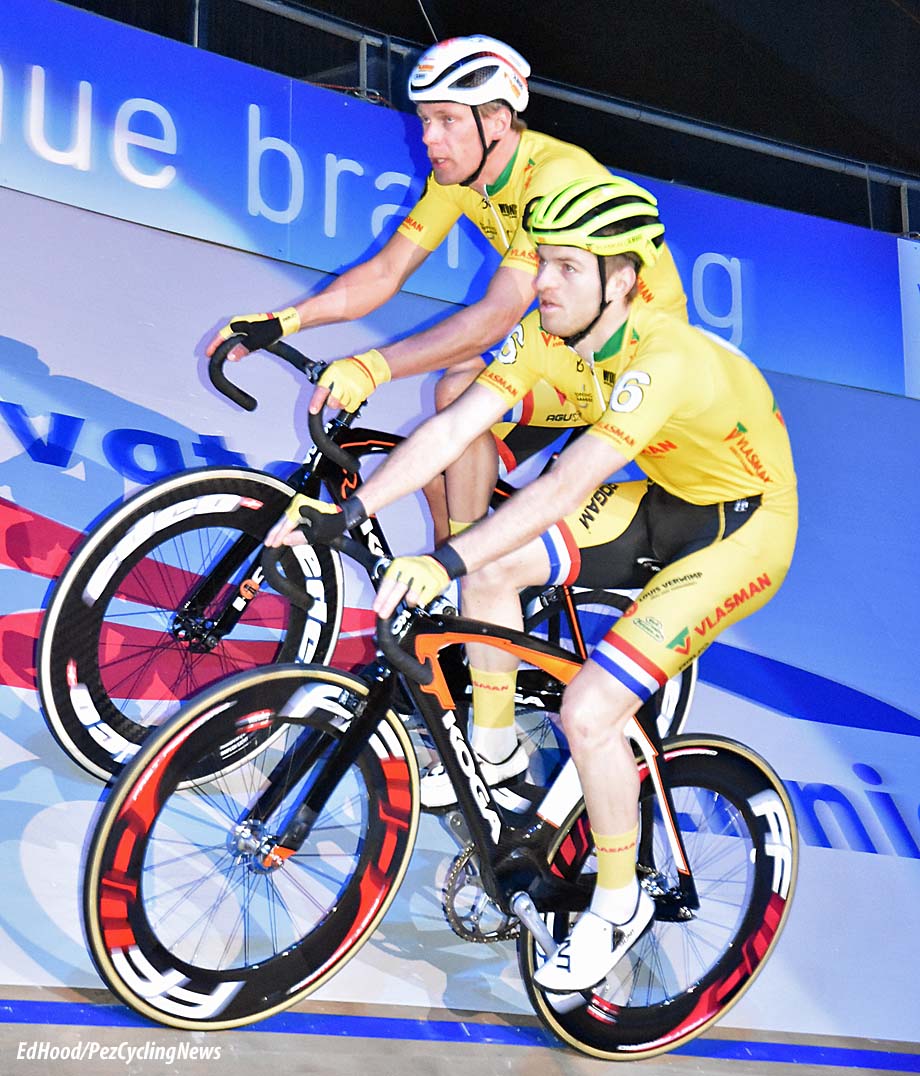 Their main rivals are ‘Flying Dutchmen’ Yoeri Havik and Wim Stroetinga; the latter has been around a long time, winning the World Junior Scratch Championships way back in 2002. Since then he’s been a multiple Dutch and European medallist on the track and has good road palmarès too. Havik is younger that Stroetinga at 27 years-old to his compatriots 33 years but has a similar background of Dutch track championship wins and has forged a strong partnership; with Havik the ‘diesel’ and Stroetinga the ‘fast man’. Two wins in the Berlin Six Day testify to that. 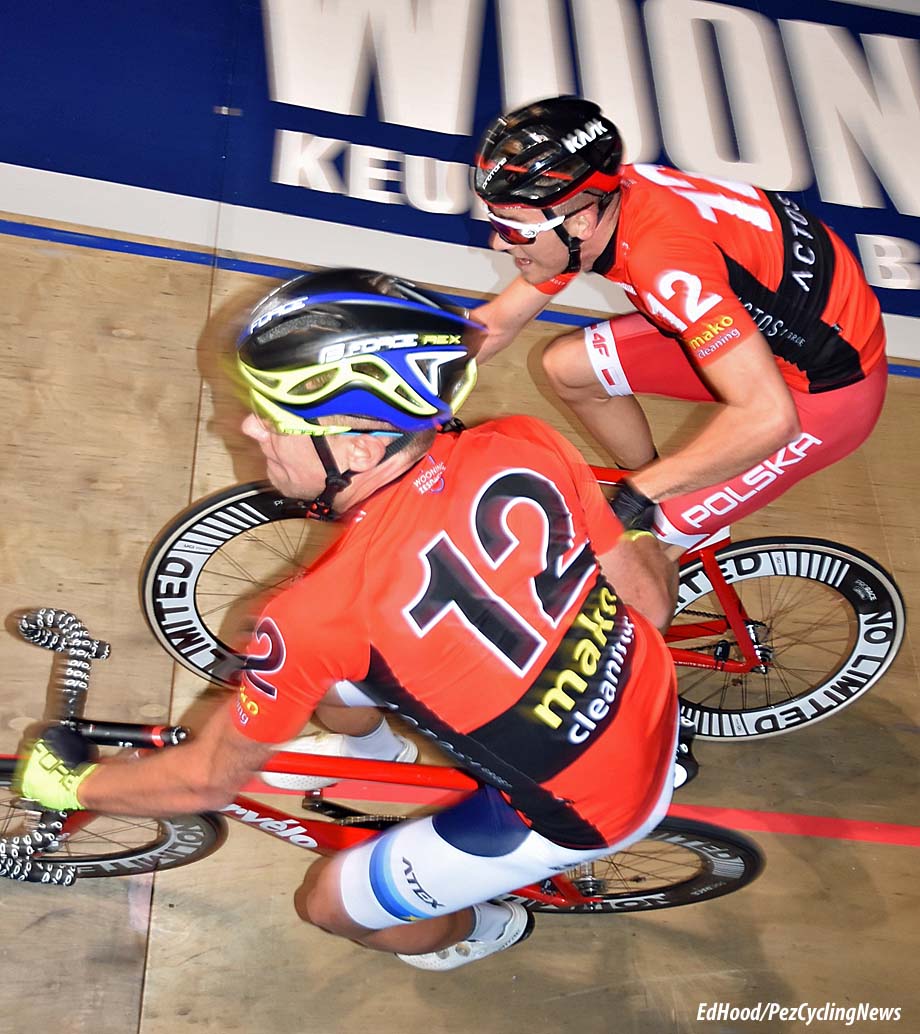 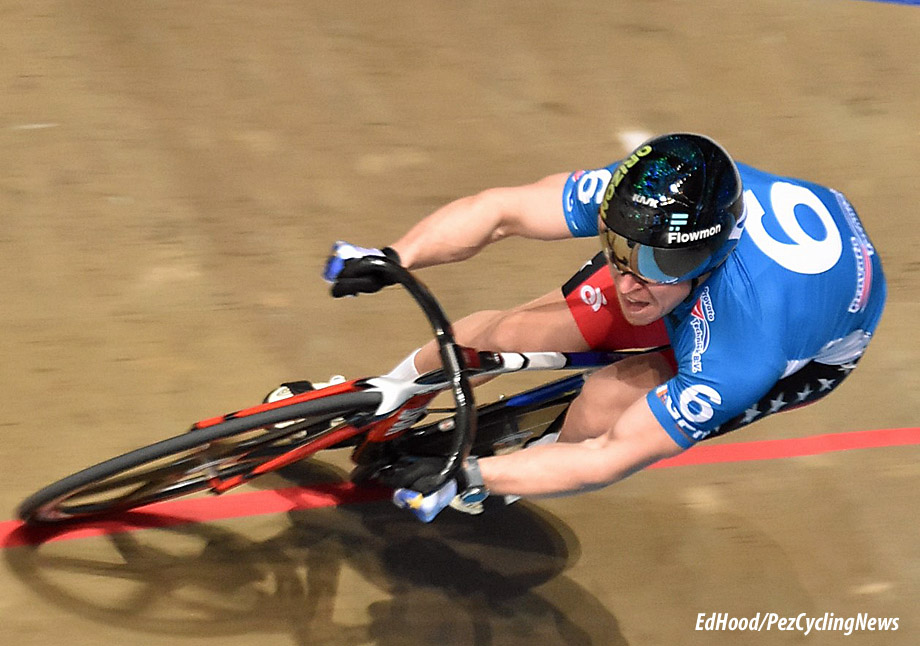 We have the two Polish riders, Daniel Staniszewski and European Points Champion Wojciech Pszczolarski plus big Czech sprinter, Tomas Babek but more on them tomorrow. . . 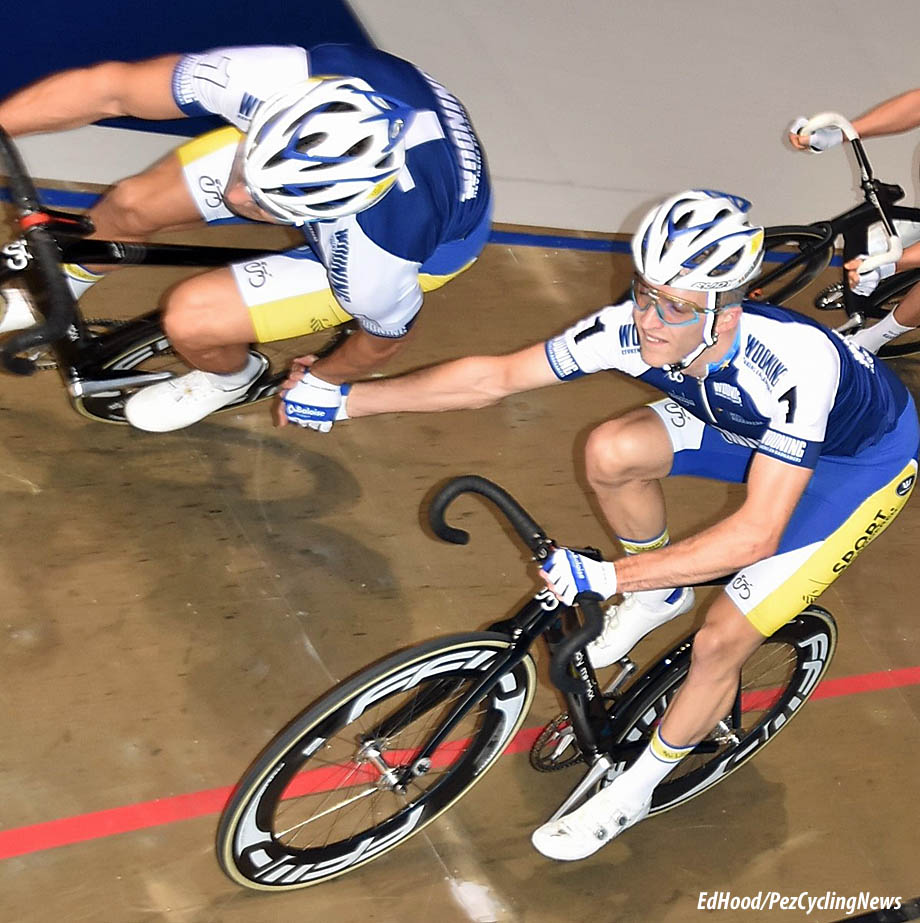 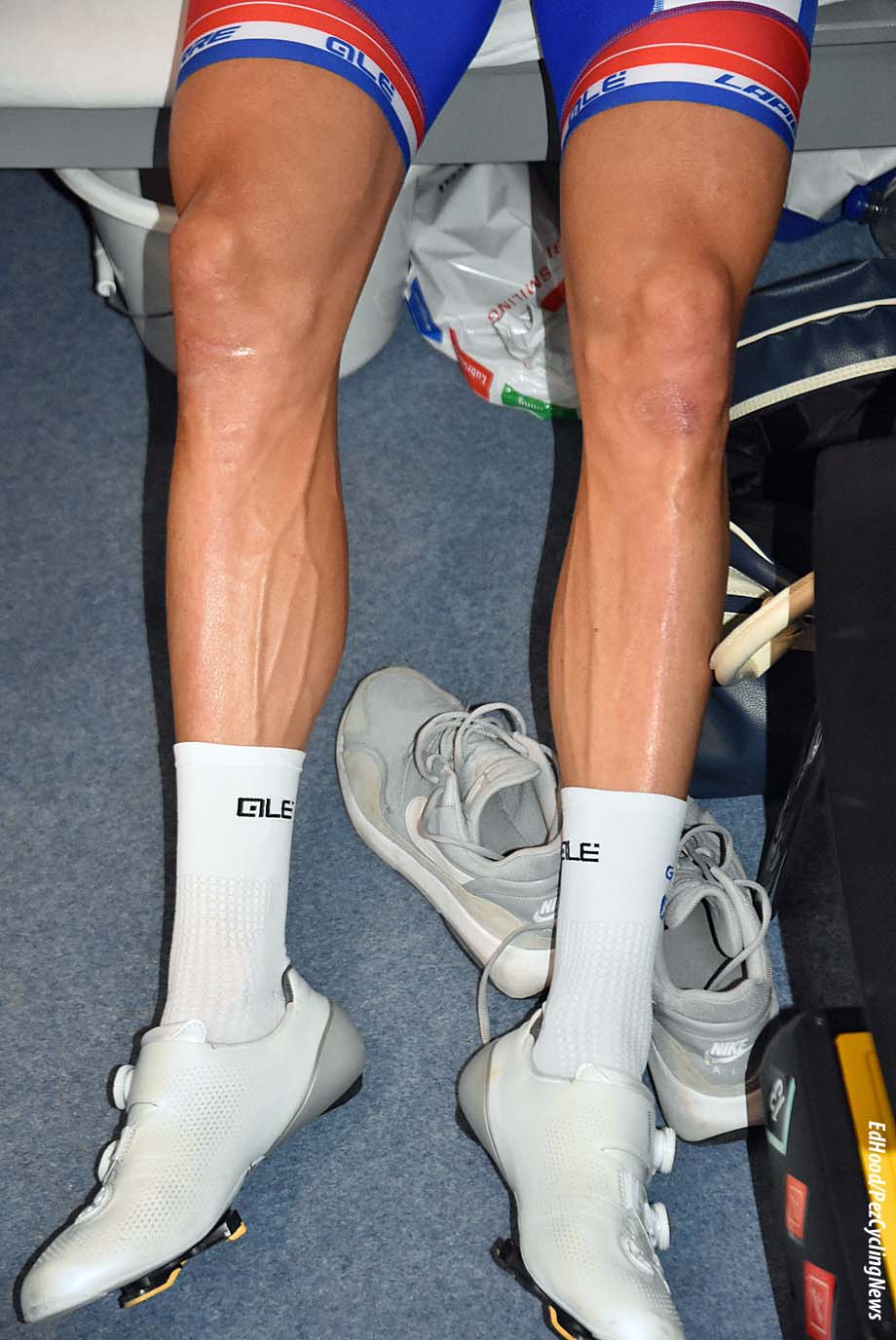 And Sinkeldam has ‘for sure’ WorldTour legs. Keirin time for the sprinters, we have big Czech Tomas Babek, he was European Keirin Champion in 2016 and in 2017 took Bronze in the Worlds Keirin and silver in the Worlds Kilometre. Part of my job is to hold the big fella up for his sprint races; you get used to holding up flyweight six day guys but Tomas is a few weight categories up from that and total concentration is required – it’s bad for the street cred to drop your guy onto the track. 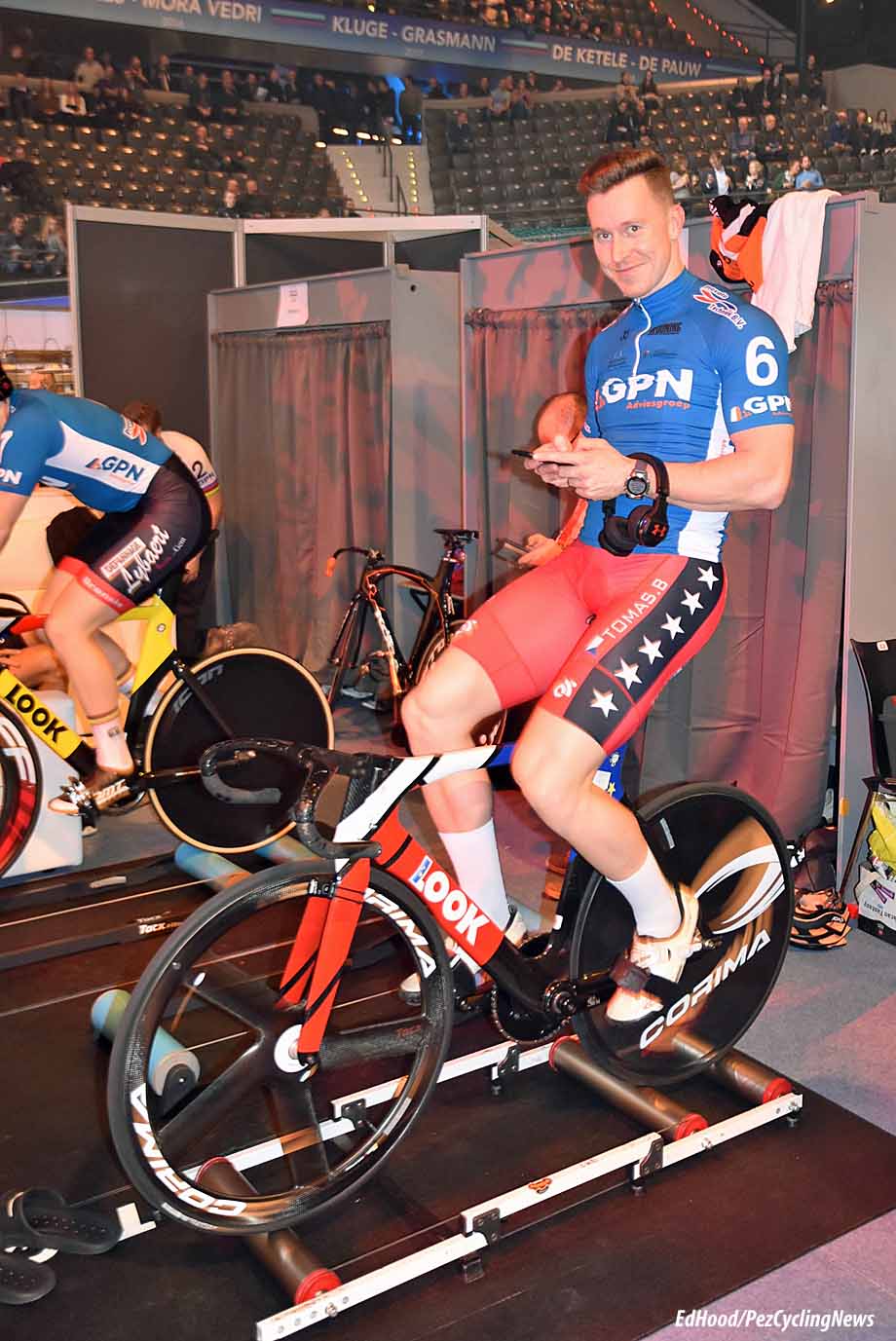 He was training yesterday, after he’d thrashed his rollers into submission he headed down to the cold wet car park to do standing start training; that’s nine 60 metre efforts on 56 x 14 on his track machine with no brakes. 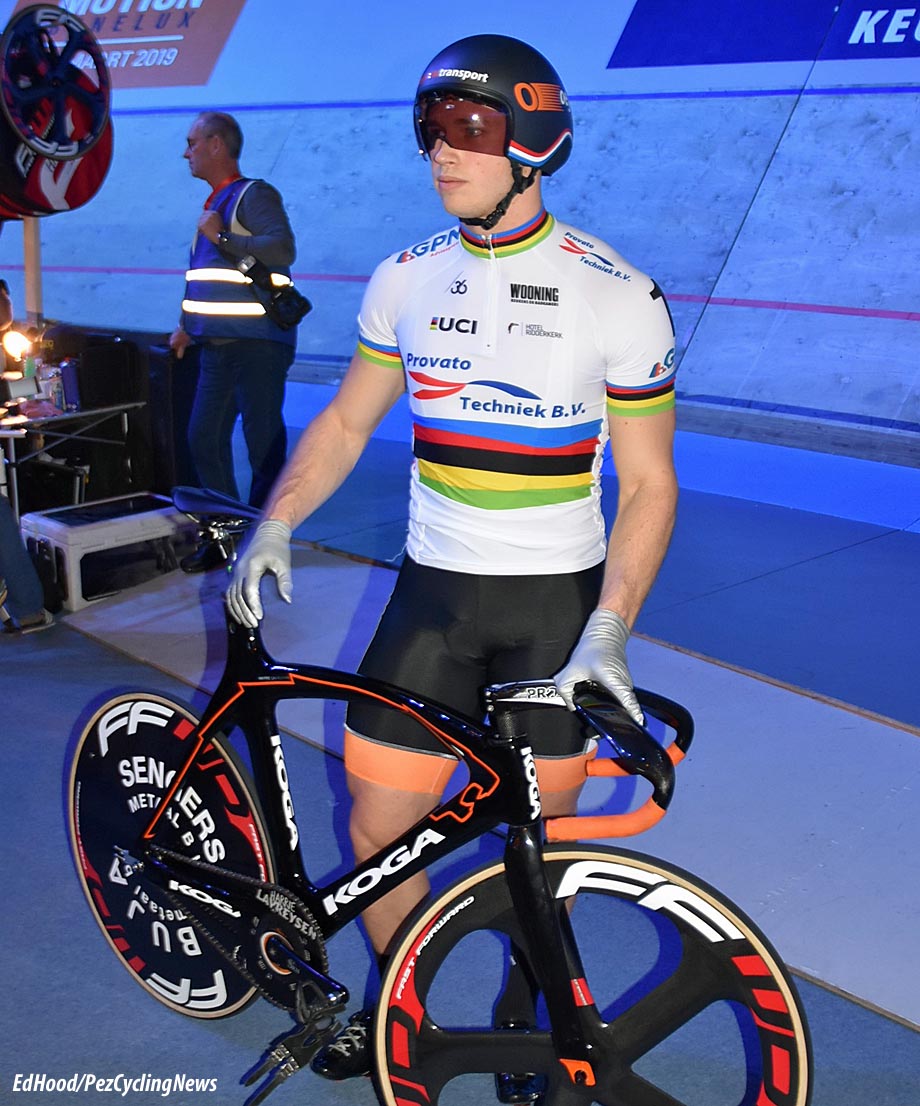 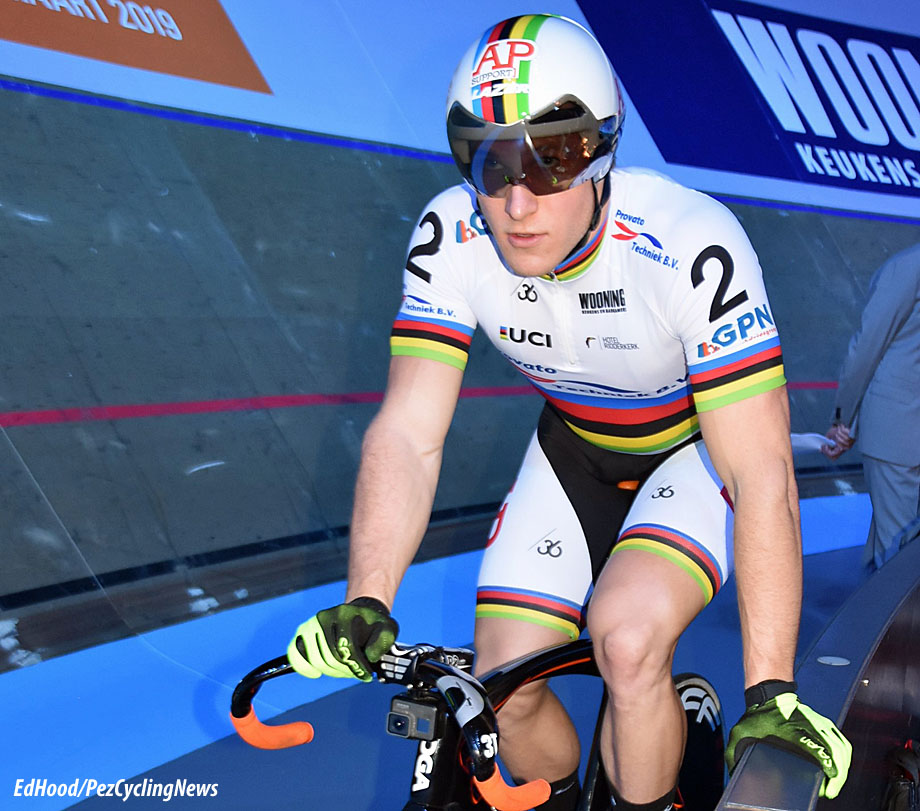 And the Dutch World Team Sprint Championship winning squad is here; it’s possible the Federation grew them in pods in a research centre somewhere – they’re all of identical height and build with calves barely clearing the chainrings.

Derny one – ‘Barbara Streisand’ from Duck Sauce is the soundtrack for that one.

Tempo race – In the omnium version of this event there are points on the line every lap but no matter how hard I concentrate on the track and score board I can’t figure out how it works. I ask Nick Stopler, he just shrugs and tells me it’s; ‘crazy’.

Derny two – When I first worked the six days I used to love pushing guys off but now I try to duck it. But when Wojciech asks me to push, I can’t say, ‘no’. 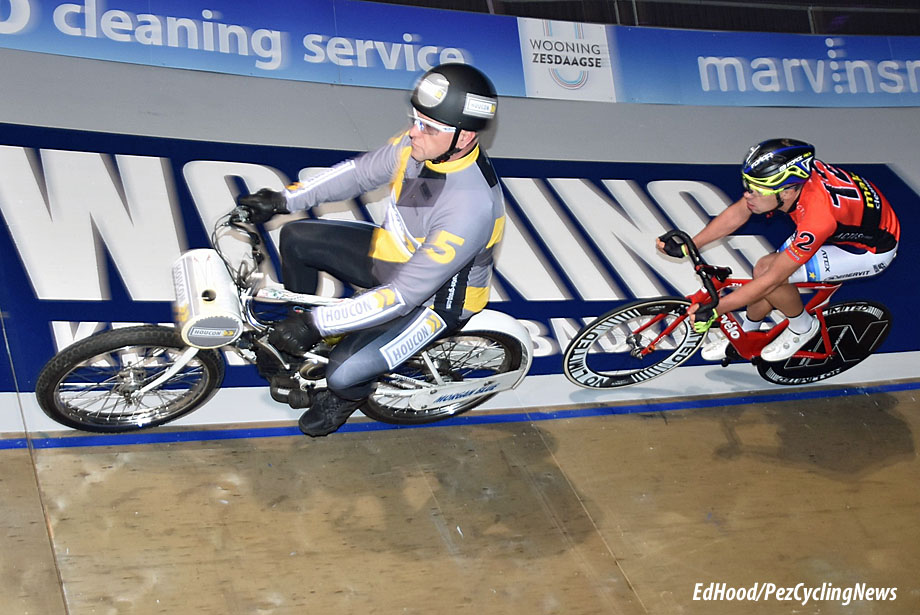 But it went OK, we were off number one, which is pretty safe. Alacazar’s ‘Crying at the Discotheque’ – one of my six day faves – was on the PA as I did my Usain impersonation, so it was fun. Flying 200 for the sprinters so no push – the Dutch guys get one, two and three. 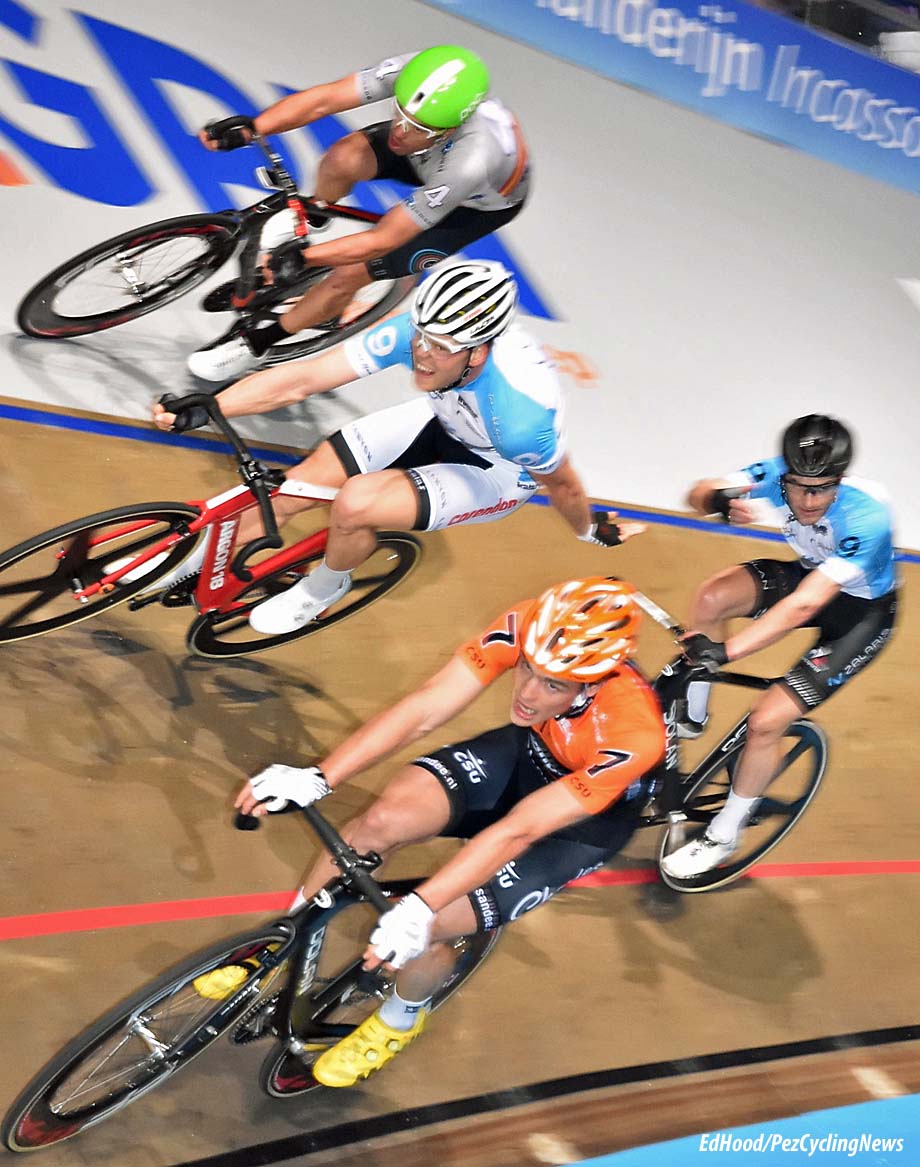 The big 50 minute chase starts at a hell of a lick but settles down and we’re surprised to see the Danes take it; Marc Hester is quick, looks the part and former Olympic Omnium Champion, Lasse Norman is bestially strong. 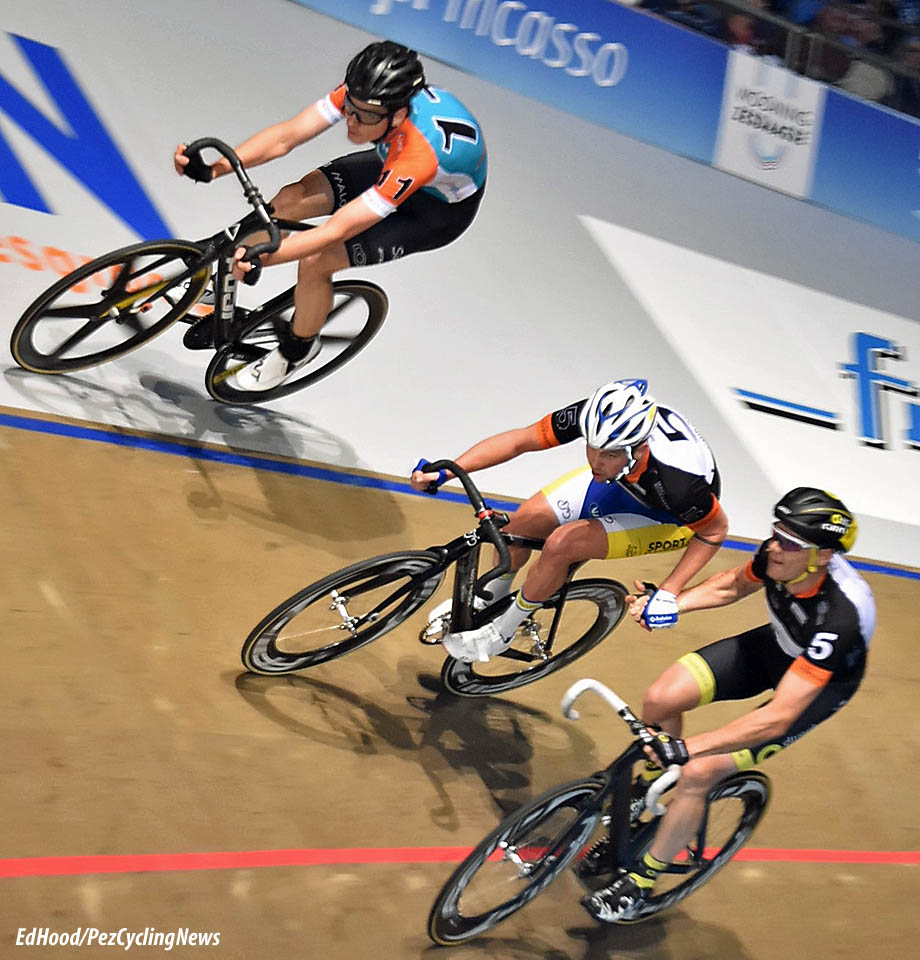 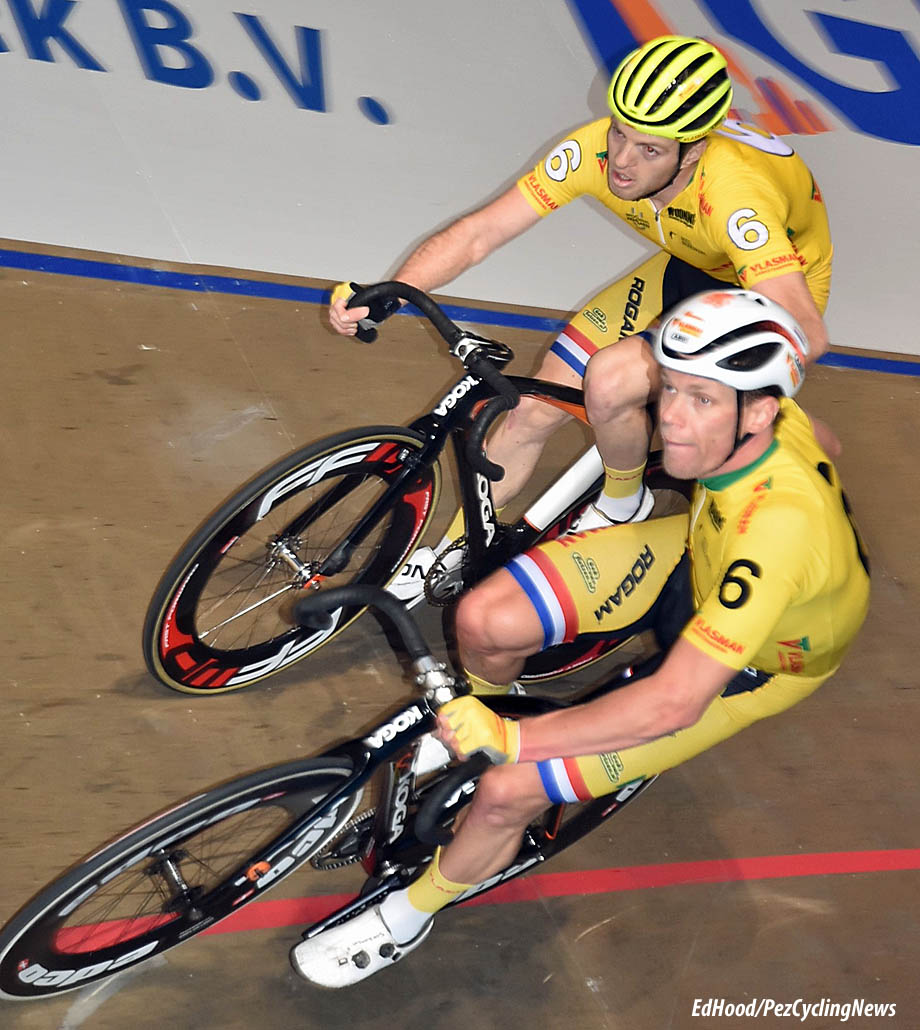 The Danes won the flying two lap TT too – the teams I’d have thought would be up there; Pim Ligthart/Moreno De Pauw and Wim Stroetinga/Yoeri Havik were left in the ‘Danish Dynamite’ (cliché copyrighted by race announcer) duo’s jet wash ending, the night as race leaders. Team sprint and I’m on holding up duties, the Dutch guys beat ‘Team Best of Europe’ by the length of the straight – my, that was a surprise. . . The u23 guys get their turn then there’s the ‘super sprint’ to close the night. Ah! 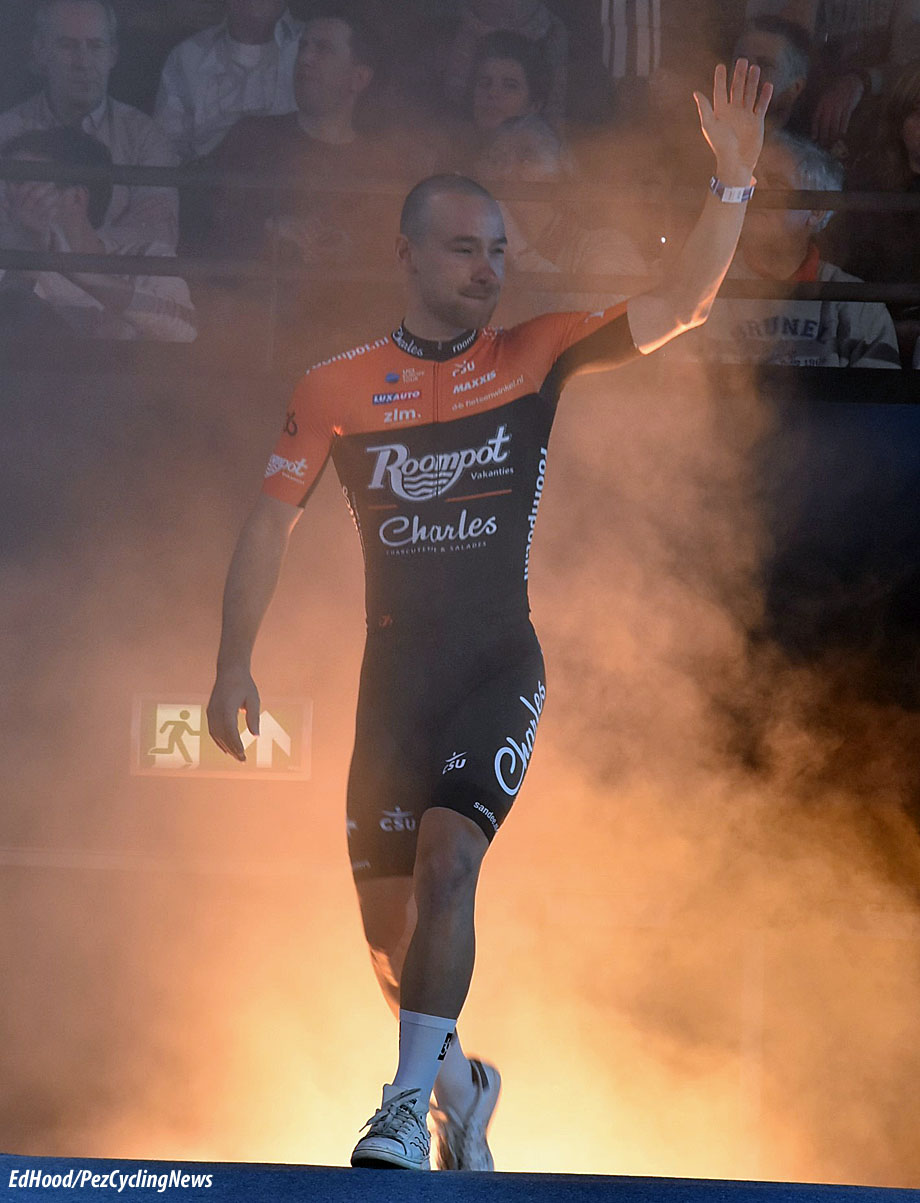 But best not forget the Roompot team launch; the guys appeared stage right in smoke and red light looking for all the world like they just ascended from Hades. 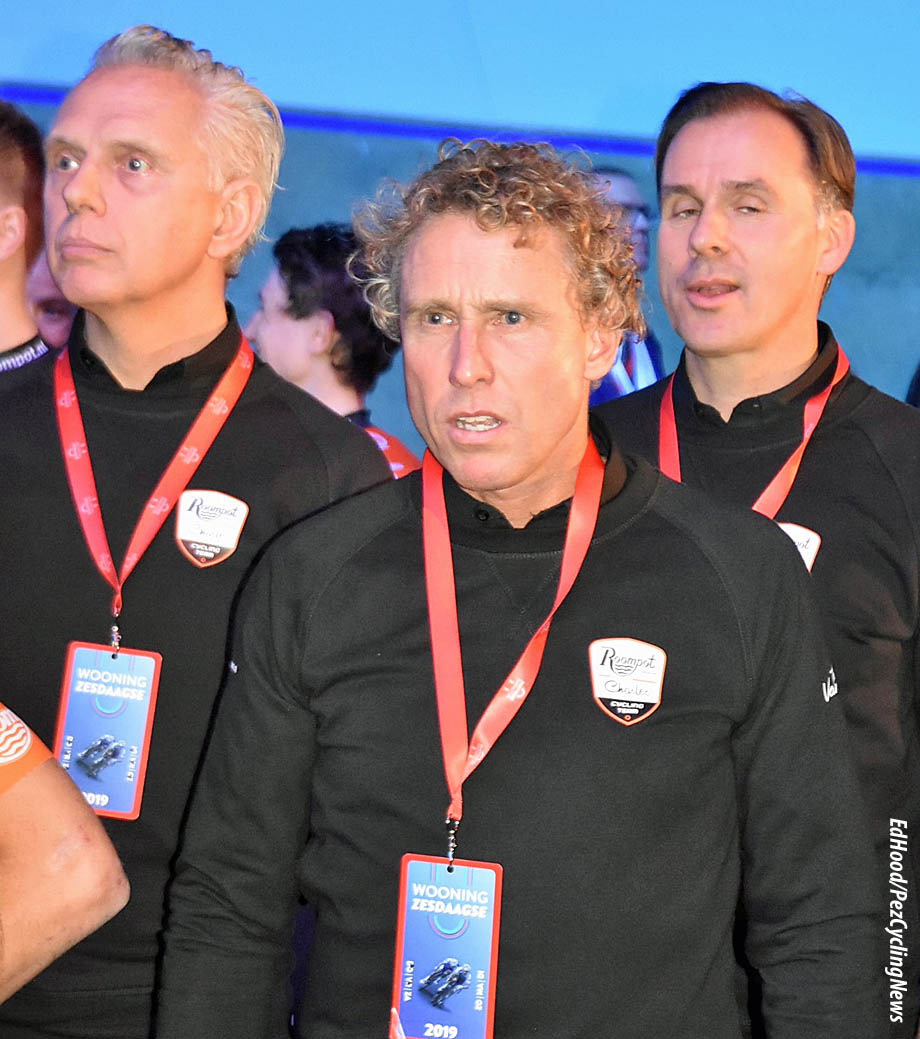 On the management side there’s a man who had a fair claim to be, ‘fastest man on the planet,’ Jean Paul Van Poppel; former Grand Tour contender Eric Breukink and former Dutch national champion and Amstel winner Michael ‘Boogie’ Bogeerd – everyone was careful not to mention Thomas Dekker’s name to him. (That’s an ‘in’ joke, give Mr. Dekker’s book a read). The team’s top men for the road are Messrs. Gesink and Boom. Empty the ‘you know what’ pails, tidy the track cabin, lug the bags to the main cabin, help with the washing, tidy the main cabin, have a beer – sleep won’t come hard this night. . .

Day Three:
‘Danish Dynamite’ – Jeez! How I hate when the ‘speaker says that – take the first Madison and the flying two lap TT goes to them too. I can’t remember who won the devil but the tunes were good, especially the Miami Sound Machine. 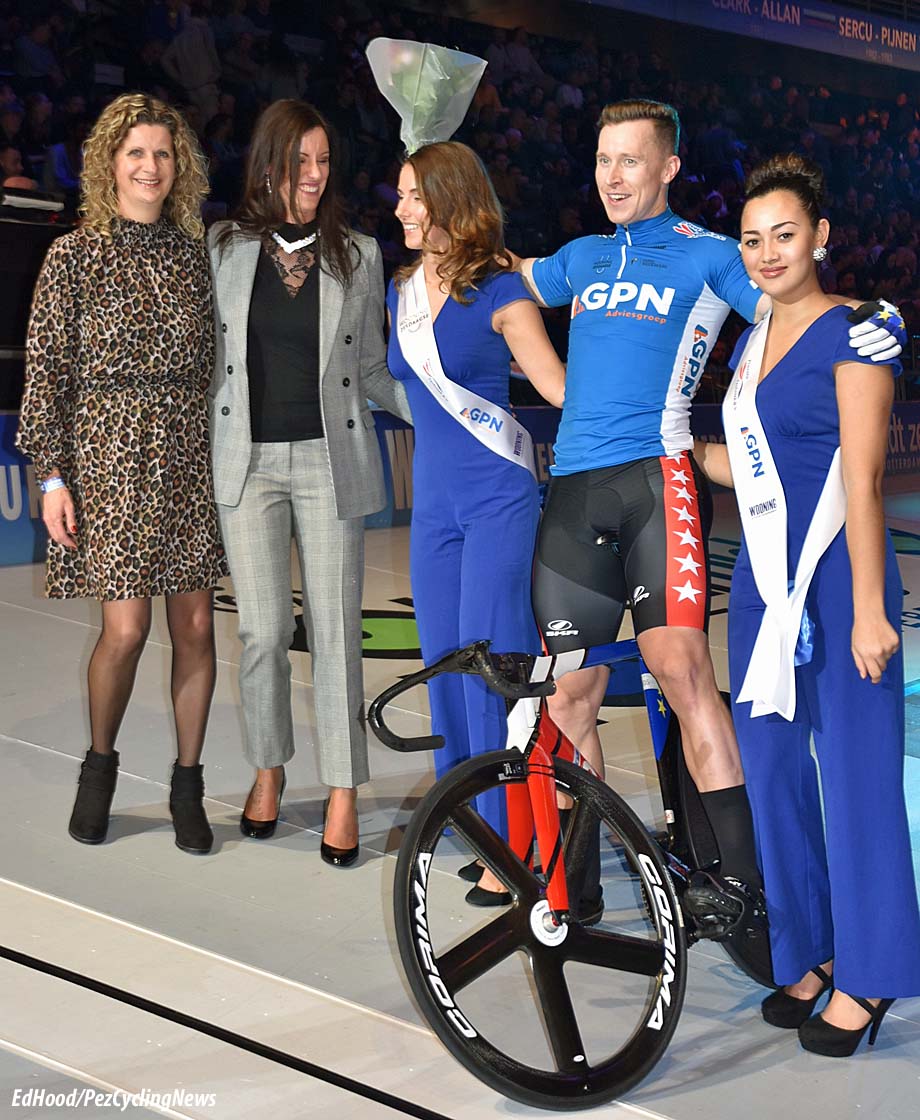 I have six holding up duties tonight and have to sprint back round to the start line again when our boy wins the keirin, we need a picture! He gets the flowers and kisses from the girls – who are all chosen for their personalities, the fact that they are all gorgeous is just a coincidence. 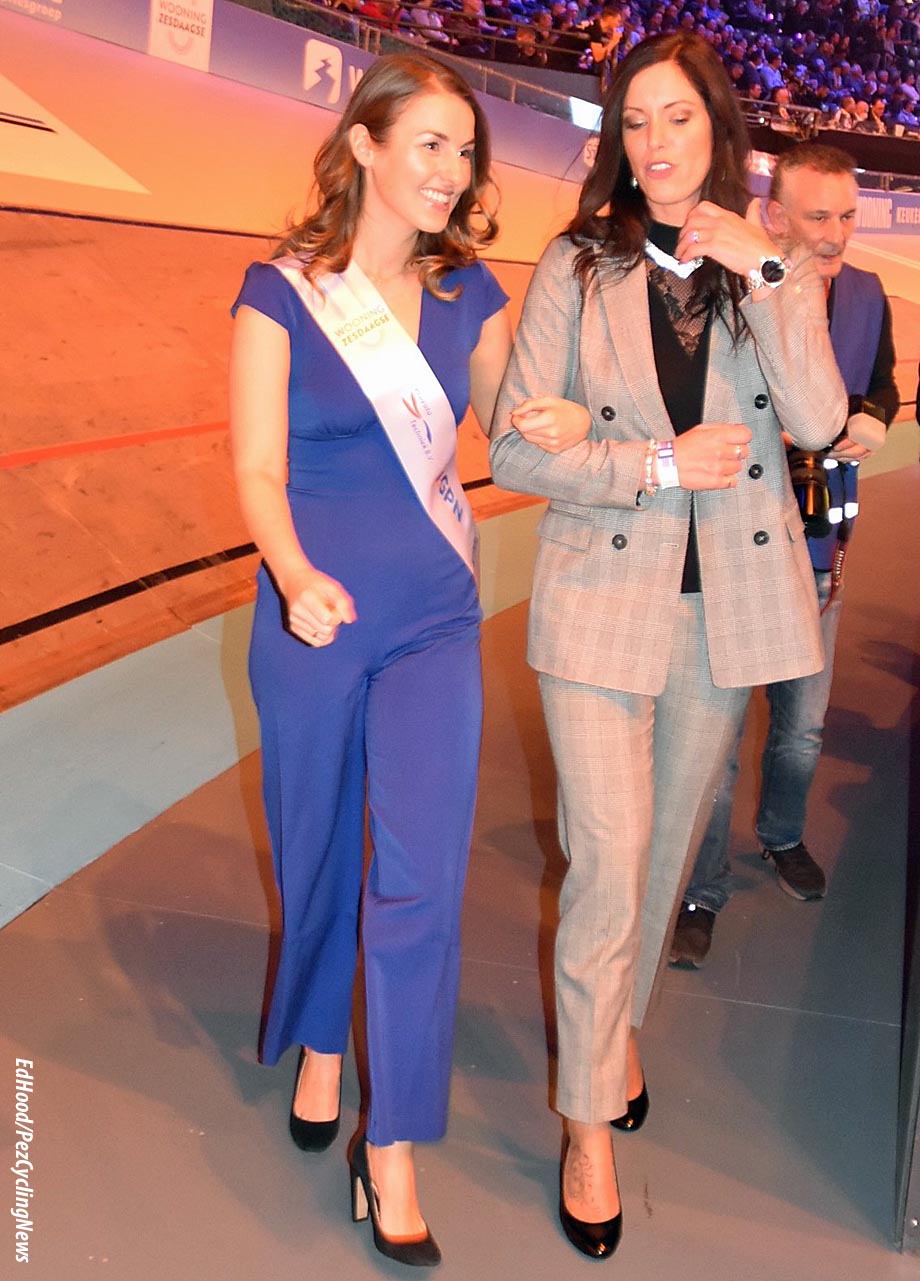 What’s nice is that a member of the race staff escorts the ladies back to their enclosure. I volunteered but was told to get back to the pits and be thankful I still have my creds. Tempo time for the u23; OK, I think I’ve got it; after five laps the first guy across the line gets one point and the first guy across the line thereafter gets one point on the finish line for the rest of the race – I think? The big chase and guys are showing signs of tiredness, the hollering from the peloton indicates that – as do the missed changes. 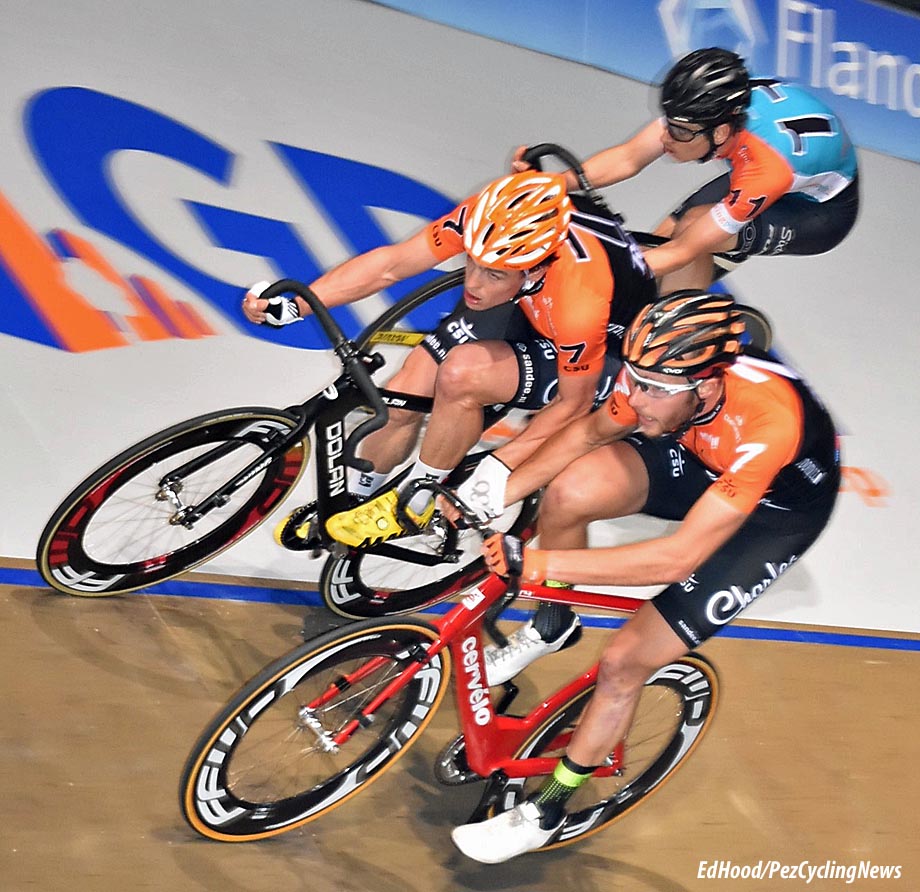 Worlds omnium and points silver medallist, Jan-Willem van Schip and Roompot team mate Stijn Steels take it. More holding up for Ed then it’s the retiral ceremony for Kees Maas, one of the official – complete with songs from The Netherlands answer to the late, great Eddy Wally – a certain Lee Towers. ‘My Way’ and ‘You’ll Never Walk Alone’ kinda stretched out a little bit and had officials nervously glancing at watches.

Former Rotterdam six day winner, Robert Slippens is in the house, when I ask him if he’ll be doing a few laps for old time’s sake the answer is; ‘no ####### way!’ I was only asking, Bob. . .

I have a lot of pushing off to do tonight and after I’ve released the big guy for a sprint, I hear my name from the crowd. It’s Freddy, the man who minds the sacred entrance to the back straight cabins at the Gent Six Day – we can only wave, but nice to see him, he’s a cool guy. 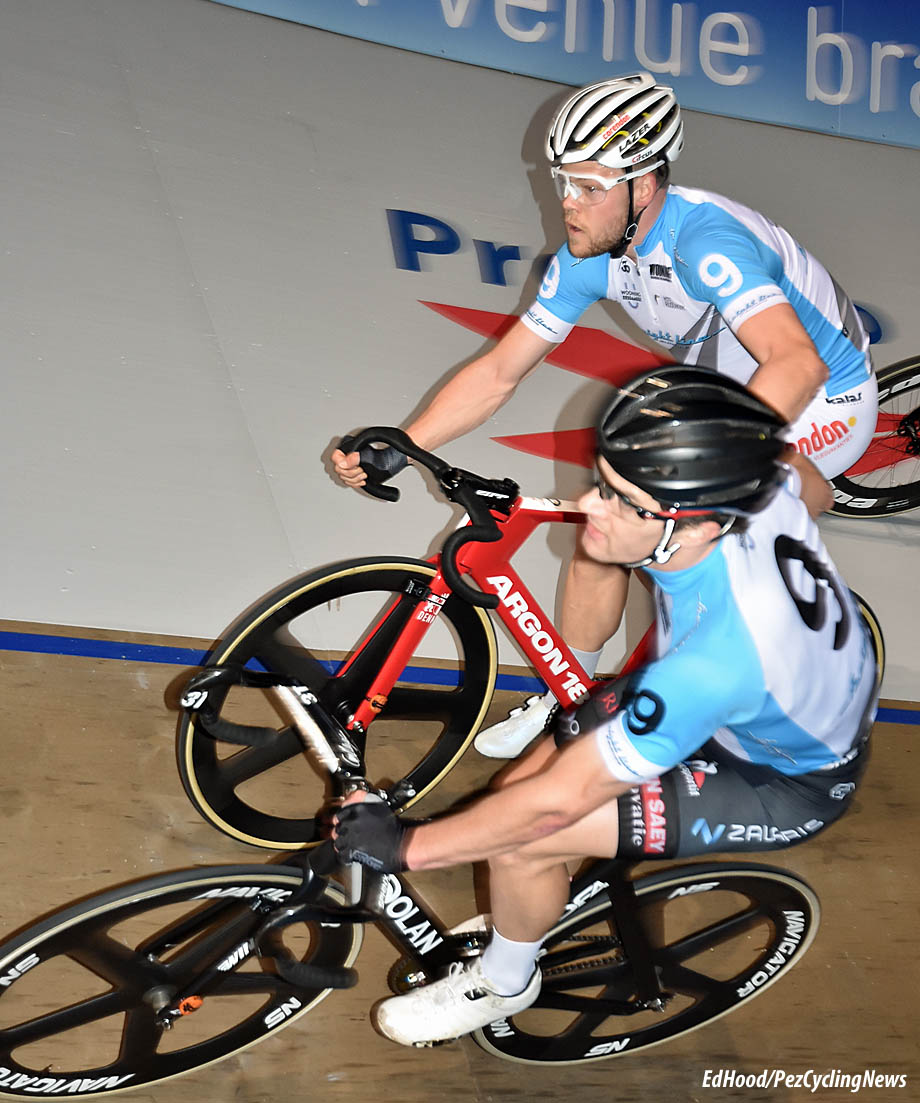 Tempo race, team sprint – I can’t remember much after that save ‘Danish you know what’ boys continue to lead.