The 2015 US Cyclocross Nationals served up some of the muddiest racing in recent memory. But mud makes for epic days, and awesome photos – and PEZ photog Will Swetnam serves up his faves from the long weekend of soggy, dirty bike racing.

– Photos & Words by Will Swetnam –

The conditions during the early days made for some great racing. The course was a great mix of faster sections mixed with off camber rolling sections and two sections of limestone stairs. This was a key area where folks could overtake, or lose valuable time. 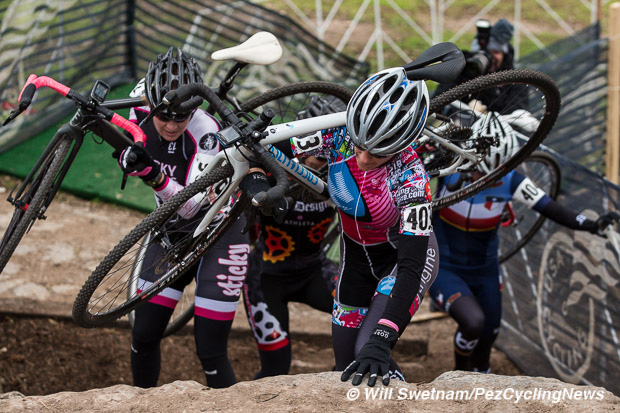 A group of Female Masters 40-44 racers scramble up the long limestone stair run up.

The finish of the Women’s Masters 40-44 class had me thinking of the intro to the old ABC Sports show, Wide World of Sports – it was the joy of victory… 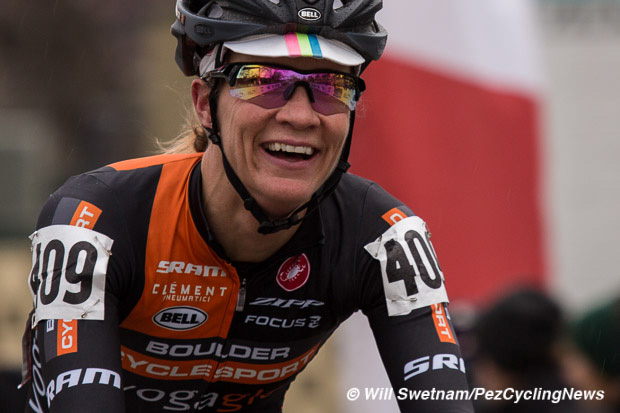 …and the agony of defeat… as favorite Christina Gokey-Smith (Pepper Palace Pro Cycling) did her best to overcome a tough start to her race. Pulling out of a pedal during the start that caused her to almost crash, and then having to deal with a flat; she chased hard to make up the 20+ places lost. She clawed her way back to 5th, just 1:40 behind Webber on the tough course. 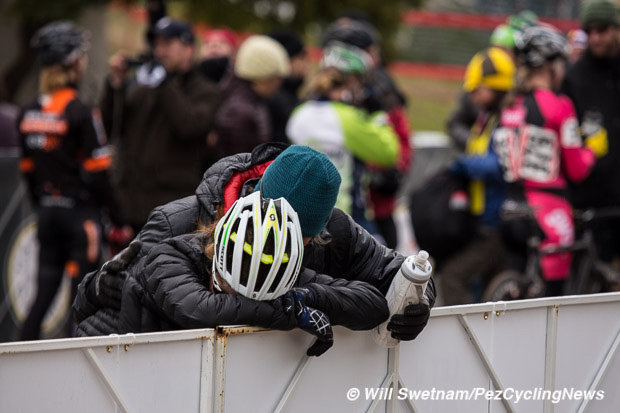 Christina Gokey-Smith is consoled by her husband as other finishers celebrate behind.

Rains forecast for overnight never materialized so the racing on Friday continued to be fast and gave the advantage to those with long legs for the limestone stair sections, and the technical ability to ride the off camber technical sections. These two areas seemed to be where the most time was made or lost as there was little action related to pit strategy. 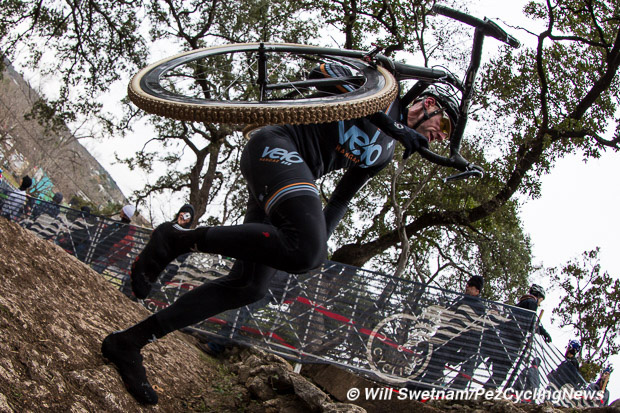 Colder and windy, but not wet; Friday’s racing was fast and fairly mud free.

Large fields made for exciting racing the length of the day, from packed starts to great opportunities to enjoy the flowing sections of the course in Zilker park. 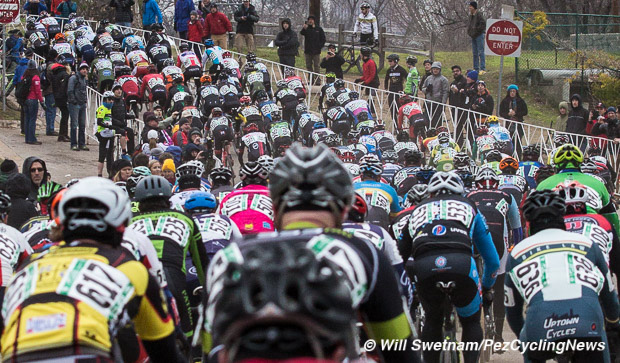 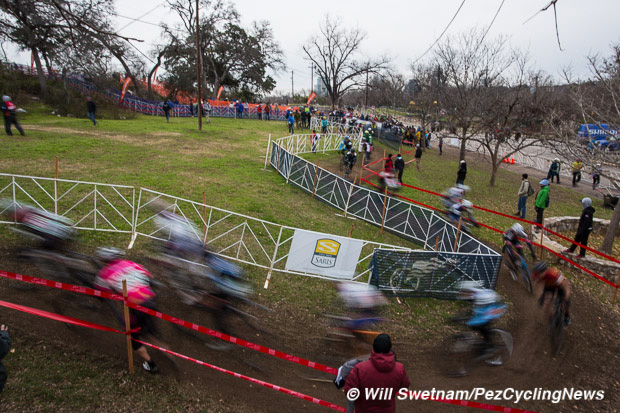 Racers flow through the undulating off camber course on Saturday, this section is between the two sets of limestone stairs.

And then the rains arrived… Saturday morning’s racing was in the soupy sloppy mess that makes for great spectating, but not the easiest conditions for the riders (or their crews in the pits). 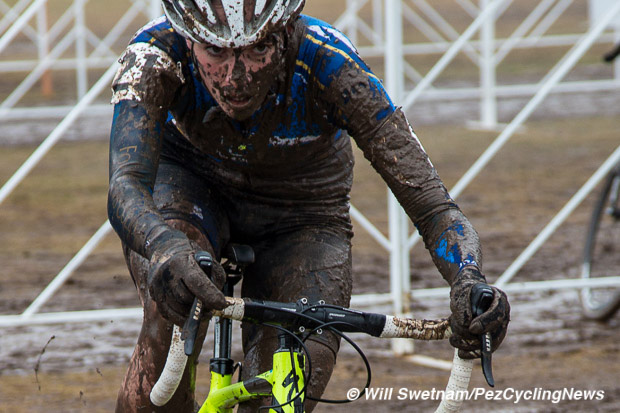 The Collegiate racers had the sloppiest conditions, it is hard to pick out this Fort Lewis College racer’s number under all the mud she’s collected along the way. Sophia Gomez Villafane (Durango, CO) rode to a 9th place finish. 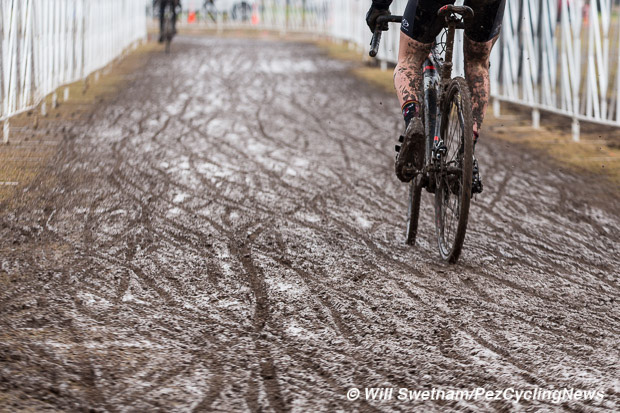 The straights along the pits were soupy, slick, but rideable… the mud wasn’t too thick… yet. 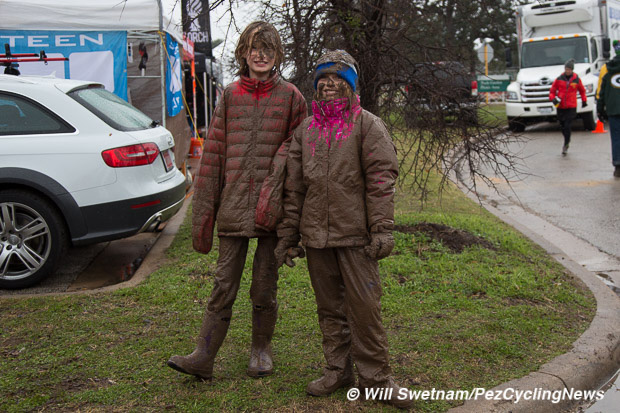 Great fun, for sure – but I wonder if their parents ran the pressure wash on them before letting them into the car…

The men’s collegiate races were just as slippery – light sprinkles and mist kept the moisture levels about the same the whole day – preventing a racing line to develop. What lines were there soon disappeared in this off camber slippery section, as D2 division racer Trever Kingsbury (Brevard College) soon finds out on his way to a 13th place finish. 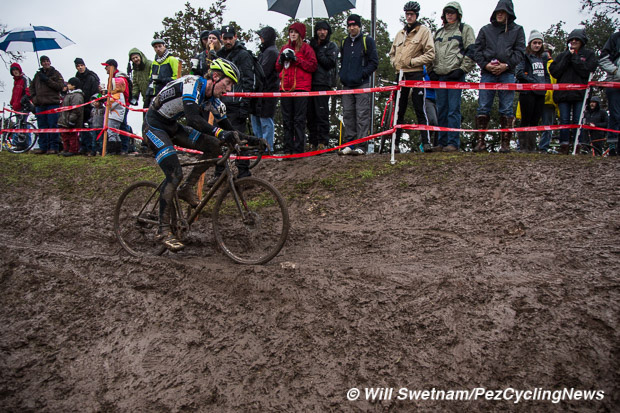 The off camber is about to kick in… 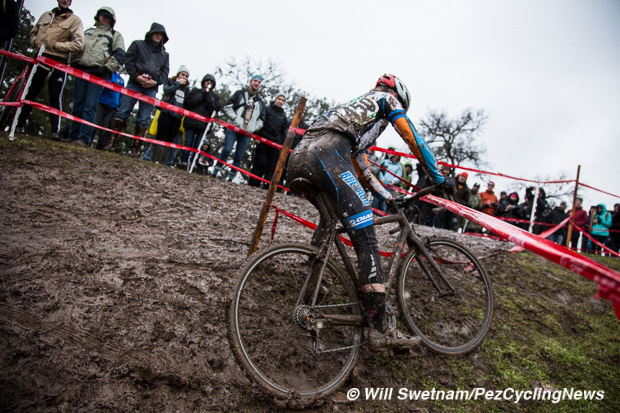 …and take him right under the course barrier tape.

It’s illustrated again as an attempt to pass a dismounting rider, ends up in vain as they find the mud at the bottom of the hill and struggle to keep up, still behind the King’s University rider… 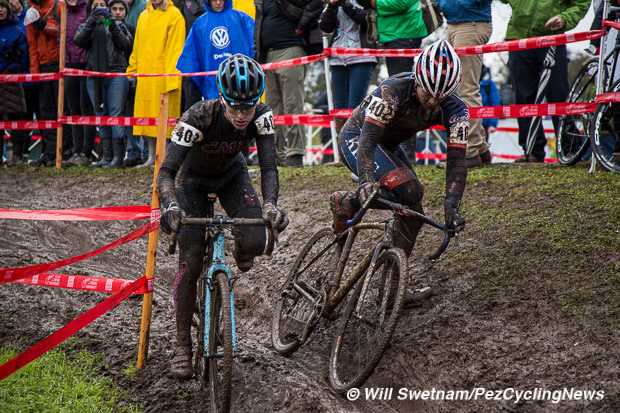 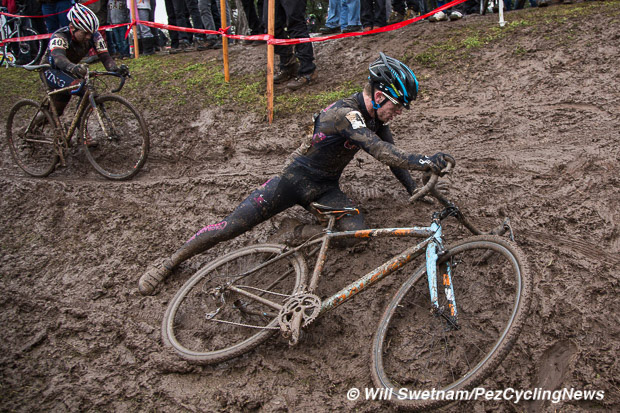 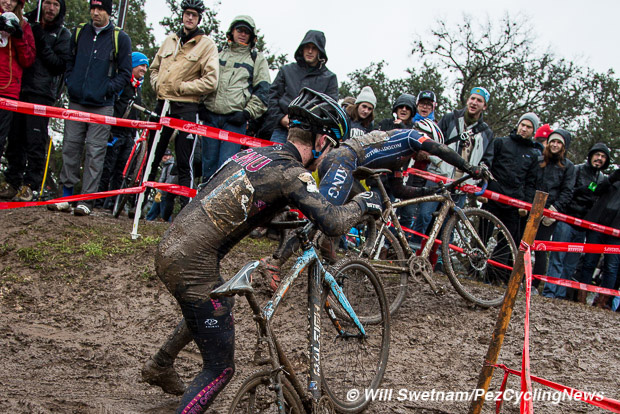 Sunday morning found the course in about the same shape as it was on Saturday – just over an inch of rain overnight had kept the ground sloppy, but in my opinion, rideable… about the same condition as Saturday had presented the riders. But the decision was made by Austin Parks & Recreation to cancel the racing until course mulching and re-routing could be done to protect sensitive areas under the canopies of heritage trees that are in the park. 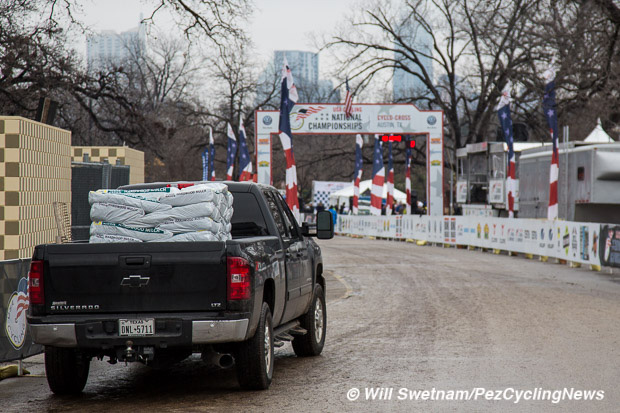 A pickup truck’s wheels were about the only wheels to be on course on Sunday – it has a bed full of hardwood mulch, ready to attend to the issues created from 4 days of racing and several inches of rain.

Of the racers, I think the delays affected the junior classes the hardest. With tight budgets and schedules and the need to try to avoid missing additional school, the attrition in these fields were the highest on Monday.

The time also seems to have created an evil, sticky condition that favored the more technical riders and teams prepared with pit bikes and mechanics to keep them operating. The riders who could, were swapping bikes every half lap – especially in the 17-18 Junior division. 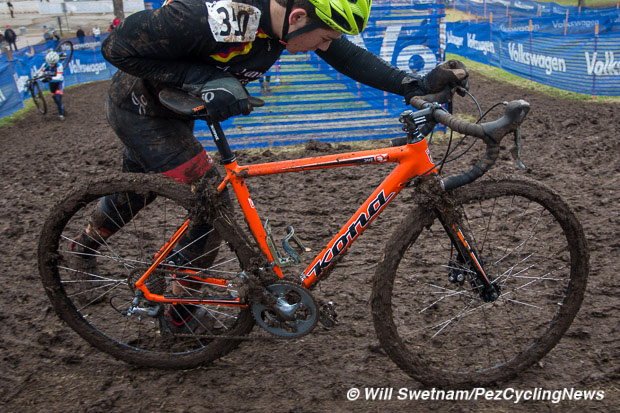 Kevin Gonzales struggles to push his bike through the hairpin after the barriers runup… mud, straw, sticks, and other debris have clogged the stays and fork. 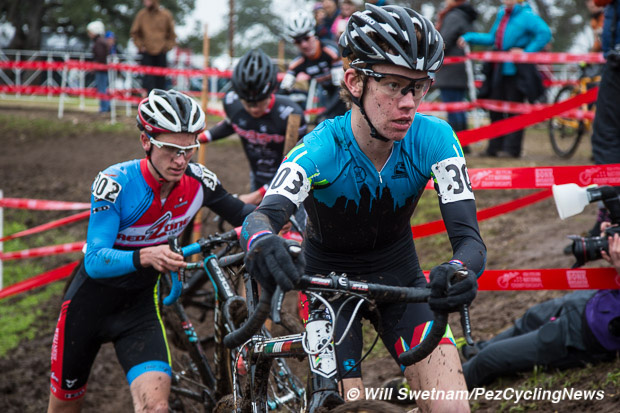 Petrov Spencer (Element Cycles) seemed a bit phased by the conditions, as he struggles through an off camber section, still in contention for a podium spot. 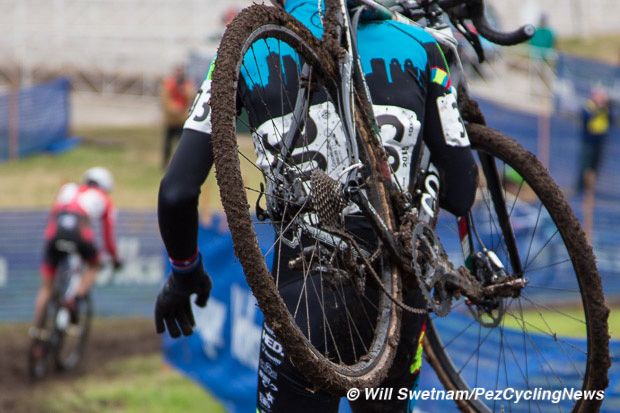 Just a lap later, he carries his bike through the hairpin before the descent to the finish straight – his derailleur and chain jammed into his rear wheel… he ended up fourteenth. 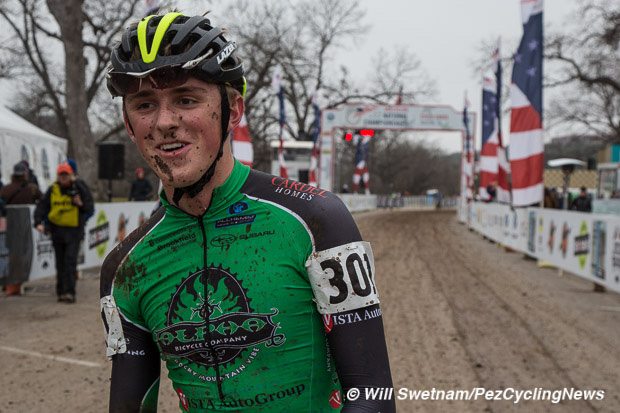 Favorite Gage Hect (Alpha Bicycle Co. – Vista Subaru) overcame some early issues to pull away from the field for the Men’s Junior 17-18 title.

By the time the Elite Women’s and Men’s races were contested, the soil had drained fairly well, and the course was much less clingy. Pit visits were much less necessary, but there was still enough mud for most racers to pit every lap.

Katie Compton (TREK Factory Racing) overcame her seemingly regular poor start to lead the field after just a few laps as she ran away (utilizing her great running skills on the technical course) to take her 11th national title. 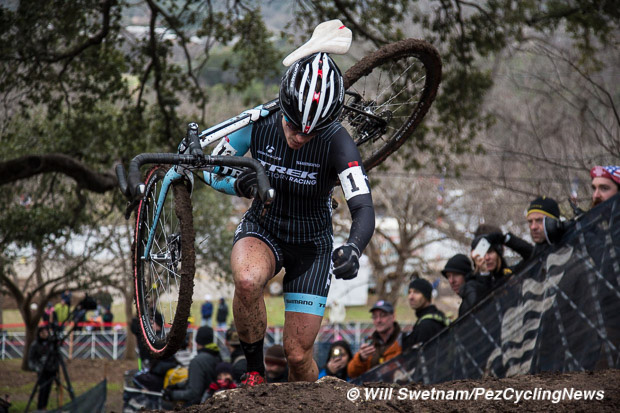 After just two laps, Katie was first up the long limestone stairs… 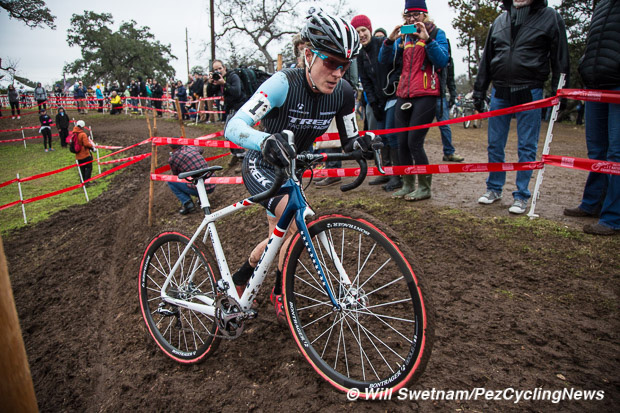 The battle of the day failed to really materialize. A strong looking Jonathan Page was ready to take the battle to defending champion Jeremy Powers, whose condition was a bit unknown after his recent illness; the technical course also favored Page. 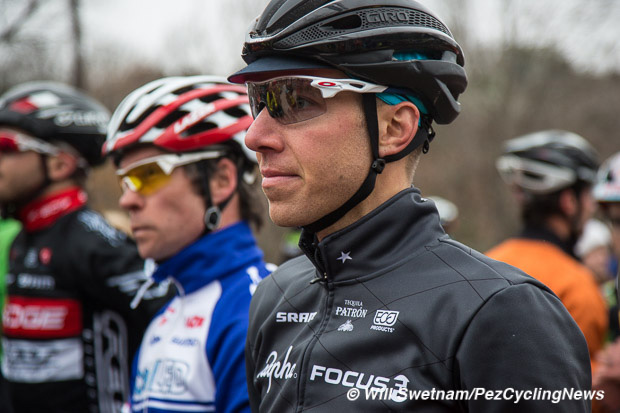 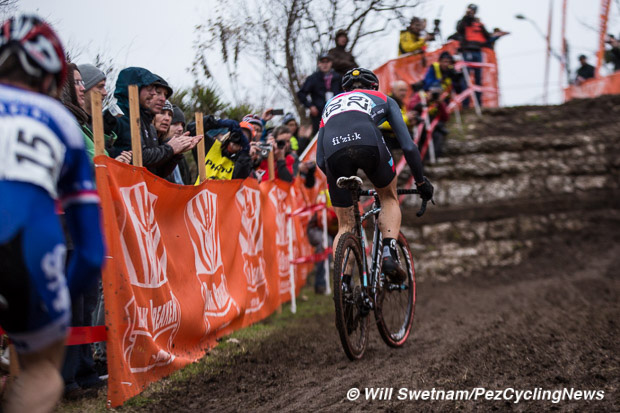 It was all Page could do to stay close to Powers on the early laps as Page was hampered by a first lap flat; as hard as he pushed, he couldn’t close the gap. He never really got close again and Jeremy was able to utilize his improved technical skills to clean sections of the course that seemed to slow his competitors. 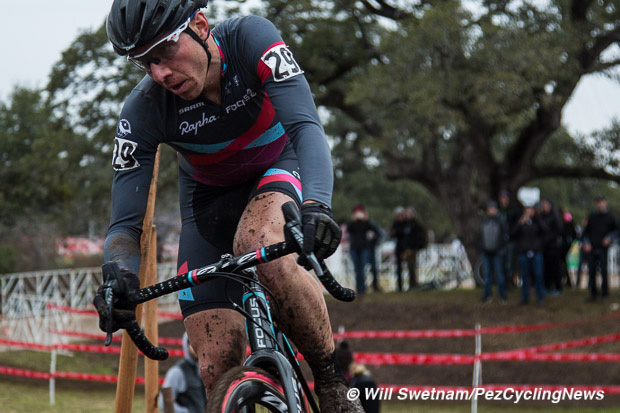 Powers cleans the technical section just before the descent to the barriers run up… in the background, you can see one of the heritage oaks, spectators standing at what was the edge of the course before Sunday. 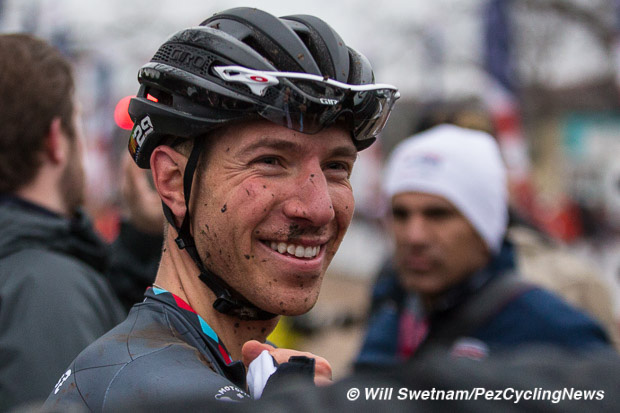 In the end, J-Pow seemed to really savor his third National title.