Race Report: Mathias Frank took a courageous win atop the Alto Mas de la Costa as he went clear with 30km left to ride and held off a storming ride from Gesink to secure another victory for the disbanding IAM Cycling team, on the 17th stage of the 2016 Vuelta a España.

The peloton took off in the baking heat of eastern Spain towards the hellish slopes of the Alto Mas de la Costa. After the early king of the mountains points were won by Omar Fraille, to keep him very close to the jersey that is currently residing on the shoulders of Kenny Elissonde. After that early skirmish a 28 man group went clear and it was soon clear that they were riding for stage glory. With 30km to go Mathias Frank and Dario Cataldo went clear, their lead never went beyond the 30 second mark but as they hit the lower slopes of the finishing climb Frank went clear and despite significant pressure from both Gesink and Koenig he couldn’t be brought back. The GC riders left it late to start the hostilities but Contador was the first to go, he dragged Chaves and Quintana clear leaving Froome behind. The Sky rider clawed it back but he was then straight away distanced by a Chaves acceleration. The Sky rider roared back inside the final 100m to ensure that all four of the main contenders finished together. 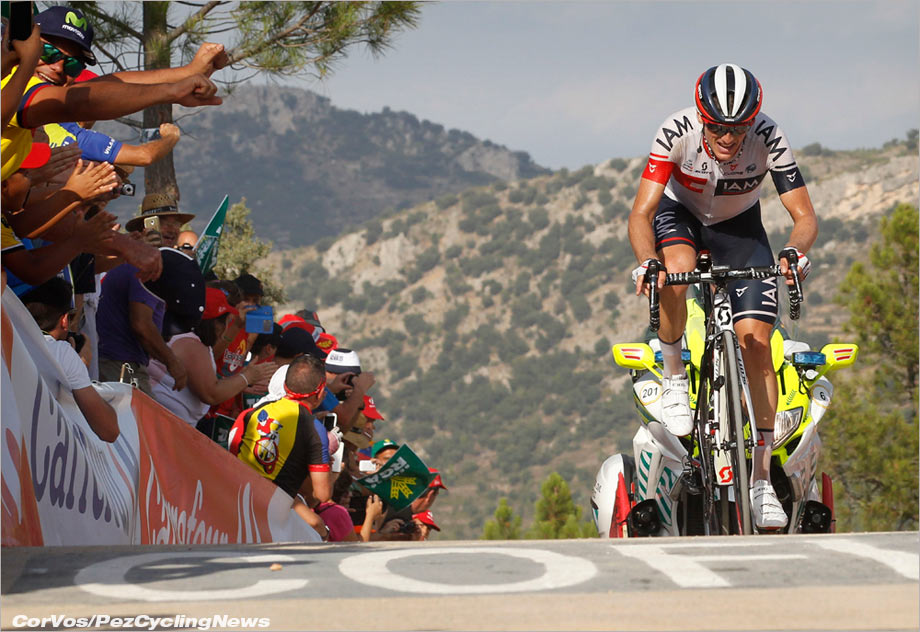 Route
There are just three stages left with the potential to break up the GC so this would be one to savour for both the riders and the fans. he riders face a 177km slog from the coastline in Castellon to the summit of the Alto Mas de la Costa, sitting at 980m. On the way they faced two second category climbs, Alto del Desierto and Alto de la Sarratella, and one third category climb, Alto de Benasal, before the final first category finish. The stage kicked off under 30 degree temperatures which are cruel for a peloton trudging into the final week of the final Grand Tour of the Season. The Alto Mas de la Costa is equally hellish though with an average of 12.5% but a maximum of 21%, reminiscent of Le Camperona earlier in the race.

Centre Stage for Climbers
The opening climb of Alto del Desierto was a perfect place for an attack but the peloton were wise to this and, after the theatrics of Sunday, were keen to keep everyone in check. Despite numerous attempts to breakaway it was all together as they crested the summit. Instead focus turned to the king of the mountains competition where Omar Fraille (Dimension Data) and Kenny Elissonde (FDJ) are entwined in a monumental battle. Fraille took maximum points at the top of the climb to cut his deficit to Elissonde to just three points. 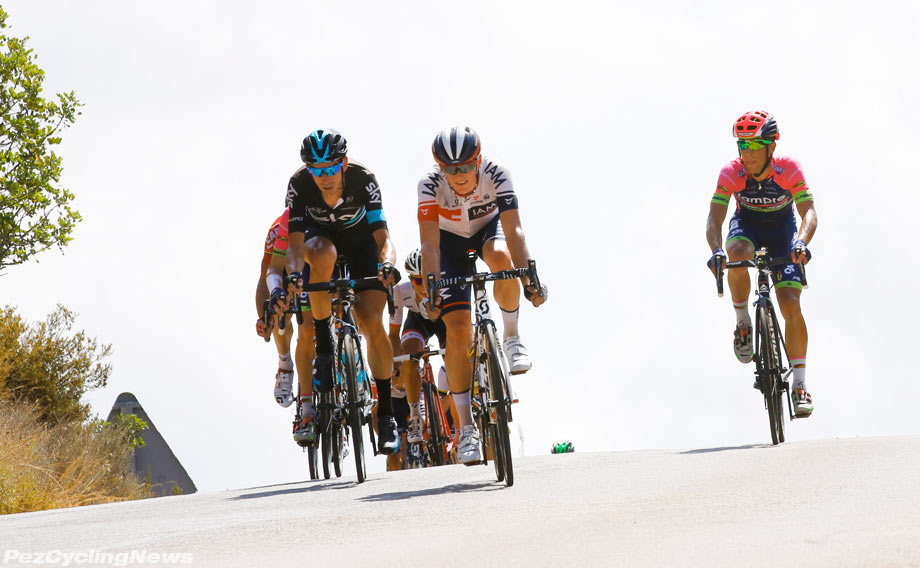 They were quickly supplemented by Maxime Bouet (Etixx-Quick Step) who made it across. The leaders also increased their gap as they quickly pushed it out to 4.28 with more than 100km left to ride.

With neither Elissonde nor Fraille involved in the break it was up to Kristian Sbaragli to take maximum points at the second climb as the break’s lead extended up towards the seven minute mark. 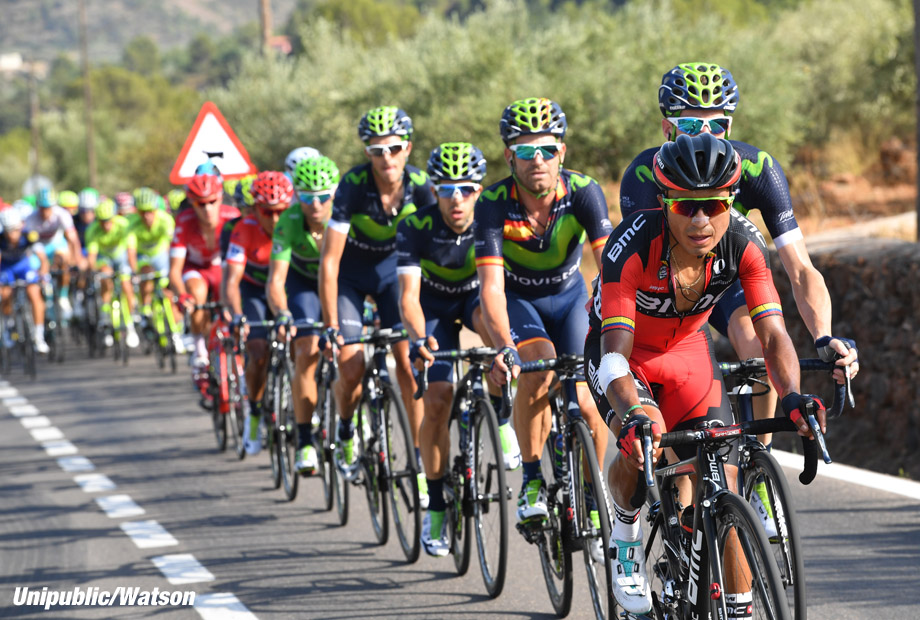 The Second Half
Sbaragli was once again the first over the climb as he took maximum points on the Alto de Benasal. The gap to the break had extended beyond seven minutes but BMC, who had Tejay Van Garderen abandon earlier in the stage, were sent to the front to bring it back to a manageable level. They clawed it back to 5.45 with 50km left to ride and 46km left until the base of the final climb.

The increased pressure from behind led to fractures in the lead group and Maxime Bouet was the first to go clear. He was drawn back by the LottoNl-Jumbo team mates and soon it was Dario Cataldo and Mathias Frank who went clear. The duo pulled their gap out to 30 seconds as the chase group fought to bring them back into the fold.

Cataldo and Frank were hanging onto their lead and despite the pressure from BMC behind, it was clear that the winner of the stage would come from the break. Bram Tankink had been set to work for Gesink and he was, almost single handedly keeping the gap to the leaders under control. They were stuck just 30 seconds ahead of the peloton as they marched towards the dreaded final climb.

In the peloton, the massed ranks of Orica-BikeExchange were taking up the chase as they marshaled a resurgent Esteban Chaves. They were followed by Movistar, then Sky and then Tinkoff as the main GC teams came to the fore. 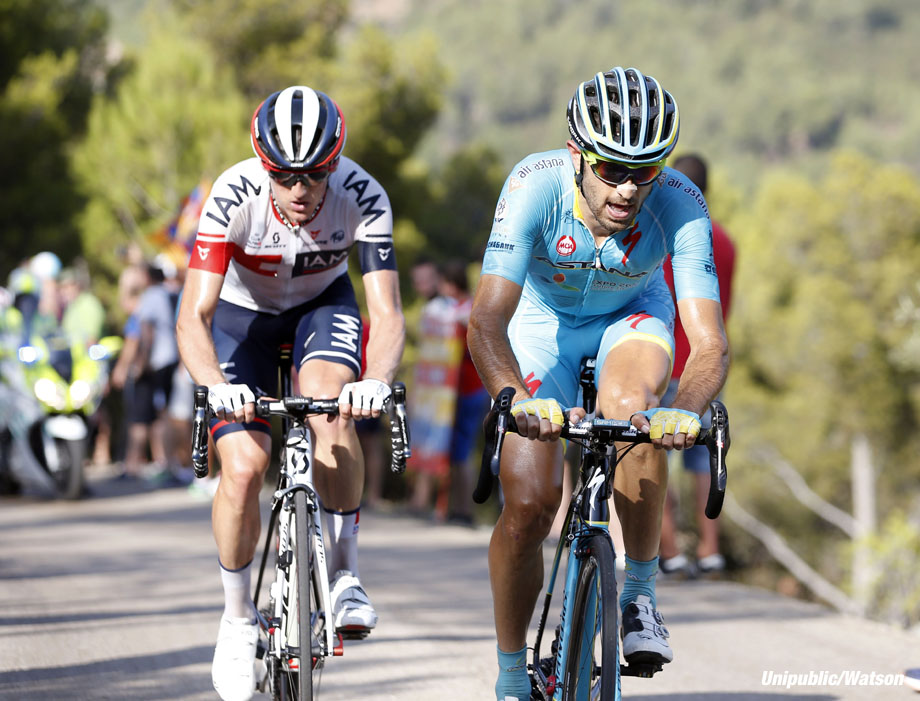 The Gates of Hell
Frank and Cataldo continued their pilgrimage into the foot of the climb but they still hadn’t expanded their gap. In fact, it was beginning to fall as Cataldo led them onto the steep opening slopes of the finale.

Robert Gesink was the first to push the pace behind but he hadn’t split the chasing group. Sbaragli was the first to attack and he instantly put ten seconds into the rest of the chasers. He was also bringing back the leading duo who were barely clinging to their advantage as the slopes kicked up.

Movistar led a significantly reduced peloton onto the final climb and they had taken a huge chunk out of the leader’s gap but the winner of the day was still going to come from one of the 28 riders out ahead.

Frank pushed on and opened up a gap of three bike lengths to Cataldo. They were still keeping their narrow advantage as the distance ticked down to just 2km. Frank was in a world of pain but his time gap wasn’t showing it. He was pulling away from Cataldo and holding off the Gesink led chase. 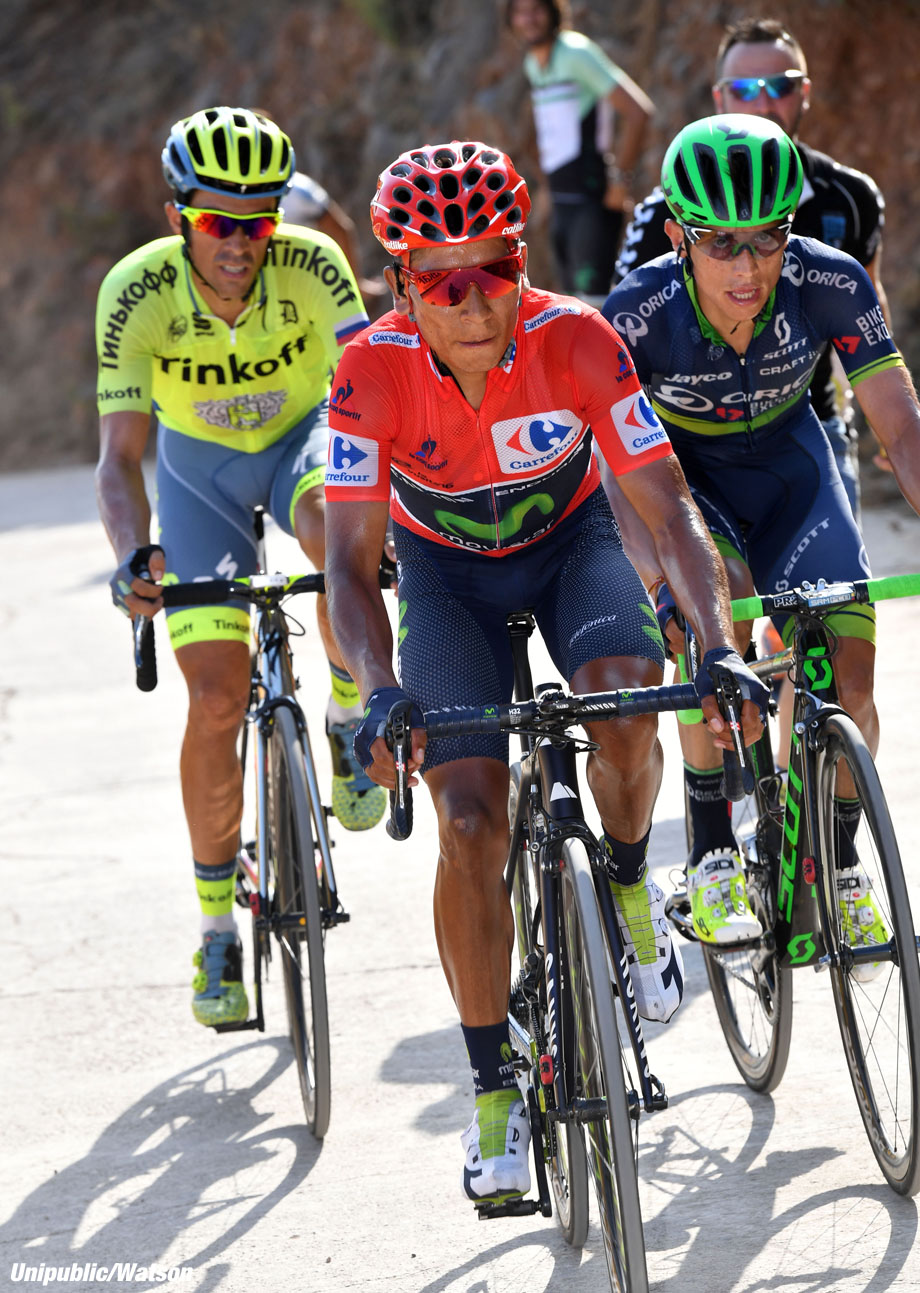 Gesink and Koenig had set off in pursuit of Frank but the Swiss rider was just about holding them all off. He was in agony but the gap was staying stable as he crawled towards the final kilometre. He was looking better than the wilting Gesink and he was starting to pad out his time gap.

In the GC group, Contador was the first to go clear and he immediately danced into a ten second lead. Quintana was the next to go and he drew countryman Chaves clear. Froome was nowhere to be seen though and he was being distanced once again. 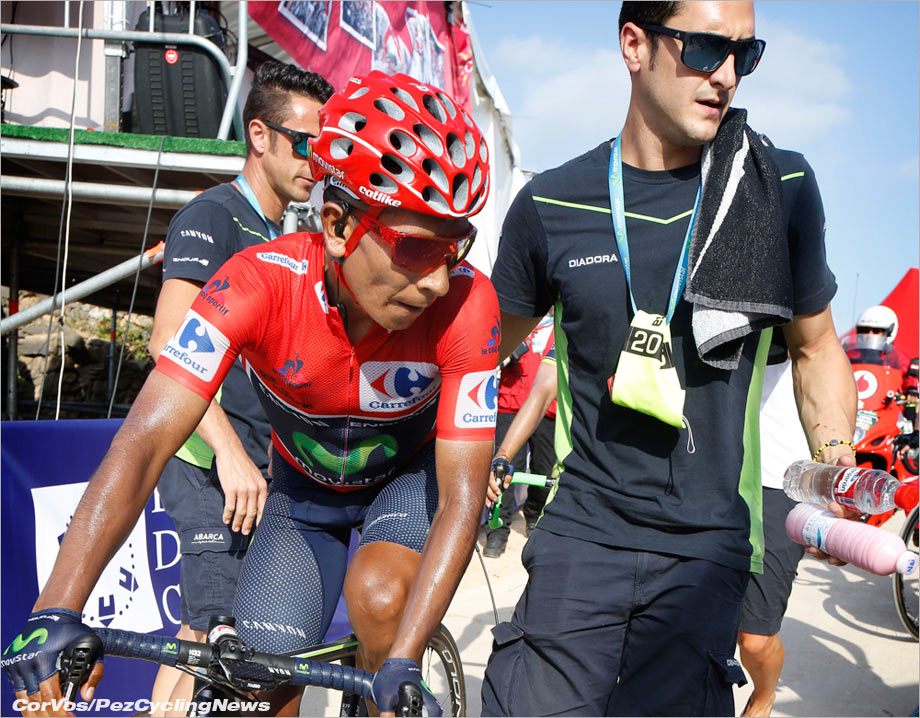 Meanwhile, Frank was hanging on and he crept up the insanely steep wall like finale to take a memorable win as Koenig fell a few metres short at the finish line.

Froome once again came back but Chaves picked up the mantle and pushed clear. His face was etched in pain but he was pulling himself clear of Contador. Froome had recovered behind and he was almost on the rear wheel of Contador, but the Spaniard pushed on and he put both Froome and Chaves in difficulty. But with 100m left to ride Froome was once again stamping on the pedals and he caught the trio of Quintana, Chaves and Contador on the line to record the same time. Froome hadn’t lost any time but he had lost an opportunity to put some time into Quintana.