Race Report: The stage started quickly with a 9 man break going clear. After letting a stage win go to a break in the last two days the climbers were desperate to take this stage win for themselves. Quintana went early on the climb but he faded towards the top as did Fabio Aru. Joaquin Rodriguez timed his attack to perfection and took his first win in this year’s Vuelta, although he missed out on red by one second. Tom Dumoulin was unhitched near the top but he was able to limit his losses by less than a second and he remains a favourite for the podium.

Route
A 176km, largely flat, romp along the Cantabrian coast. The opening 100km are pan flat before the 2nd category Alto del Torno (10.1km @ 3.2%) there’s then 38 rolling kilometers before the final, incredibly steep Alto de Sotres (12.7km @ 7.9%). The Sotres starts steeply before easing mid way up, the final 3km are hellish though with sustained sections above 13%.

A Fast Start
The last two stages have ended in breakaways and the Movistar led peloton weren’t content to let this stage end the same way. The first attack featured Biel Kadri (AG2R-La Mondiale), Maxime Monfort and Jelle Vanendert (Lotto Soudal), Amael Moinard (BMC), Kristijan Durasek (Lampre-Merida), Natnael Berhane (MTN-Qhubeka) and Sylvain Chavanel (IAM Cycling). Etixx – Quick-Step had missed the move though and they began chasing before sending Carlos Verona (Etixx – Quick-Step) up the road, he was joined by Tosh Van der Sande (Lotto Soudal), Antoine Duchesne (Europcar) and Rodolfo Torres (Colombia) the group groups merged to form a lead group of 11. Movistar weren’t satisfied with the make up of the break and they brought it all back together after 26km of very fast racing which had already put a number of tired riders in difficulty. 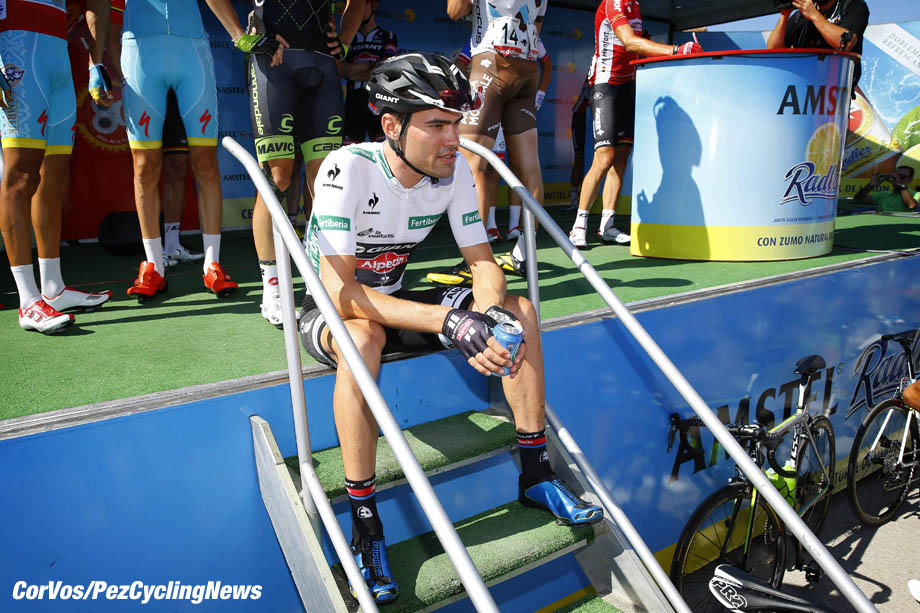 The second break of the day was more successful as Kadri, Ricardo Vilela (Caja Rural-Seguros RGA), Dominique Rollin (Cofidis), Brayan Ramirez (Colombia), Nikolas Maes (Etixx – Quick-Step), Berhane, Pierre Rolland (Europcar), Maarten Tjallingi (LottoNL-Jumbo) and Haimar Zubeldia (Trek Factory Racing) and they soon built up a lead of 3 minutes after 50km of racing. Movistar were keeping them on a tight leash and it wasn’t until the feed-zone that the 9 leaders were able to extend their advantage over 3 minutes, pushing it out to the 4 minute mark. At this point though there were 70km and both categorised climbs left to ride.

Alto del Torno
The Movistar plan was very straightforward for the stage, keep the pace high to wear down the opposition before unleashing Nairo on the final climb. One of the biggest challengers to Quintana and Aru is still Tom Dumoulin (Giant-Alpecin) and the Movistar team were clearly wanting to land somebody blows early on in the stage before trying for a knock out on the final climb.

Rollin was the first man over the climb as the break came over with a 3 minute gap on the fast moving peloton behind. The Movistar pace had been enough to cut down the break’s advantage but the majority of the peloton were still in contact with 60km to go.

The technical descent was taken with more risk by the break and they pushed the advantage back out to 4 minutes. It was looking unlikely that the 9 lead riders would be able to hang on for the stage win. In the peloton behind it was looking like a very good day for Astana, despite having the red jersey they hadn’t had to do any of the pace making and Aru was able to relax behind his team and conserve energy for the final climb.

Uncategorised Chaos
Before the final climb the peloton had to deal with a 10km long uncategorised drag. It wasn’t overly steep but the Movistar pace was enough to clip a minute off the break’s lead and to remove some of the weaker riders from the back of the peloton. There were no major casualties yet though as all the GC contenders were hanging around near the front of the peloton.

The decision not to categorise the climb was an unusual one as it could easily have been a 2nd cat. It had certainly hurt the break though, they managed to eventually creep over the top of the climb with just 2.22 of the advantage left and the hardest part of the stage left to ride.

Onto the final climb the break were resigned to their inevitable fate and the Movistar pace had strung out the peloton into one long line as they took on the early slopes. 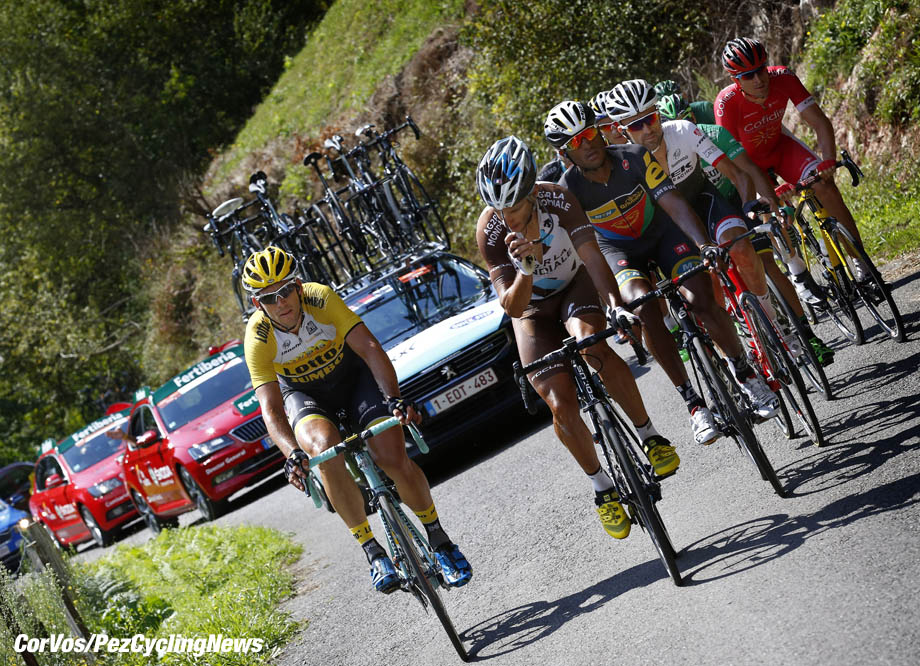 The break of the day was not allowed to much time, but that didn’t stop Trek’s Haimar Zubeldia going solo in the last K’s

Alto de Sotres
The final climb rose up through stepped limestone and grass outcrops as the real climb started with 12km to go. Biel Kadri was the first man to attack but he was countered by the Eritrean champion, Berhane. They were brought back by Zubeldia and Brayan Ramirez took the opportunity to launch his own attack off the front, he was kept in check by the Trek Factory Racing rider who then caught and passed him to go clear along with Berhane. Their efforts were in vain though as the relentless pace from Movistar decimated their lead. The Movistar men were quickly reduced as well and Quintana launched his attack.

Luis Leon Sanchez (Astana) was the only rider to follow him but the remaining Astana riders were able to gradually haul the Colombian back into the peloton. It wasn’t good news for Dumoulin though who was distanced by Quintana’s acceleration and left isolated from his team. Quintana’s attack wasn’t sustained and there were still 20 riders in the main peloton, including Dumoulin, left to reel in the lone leader in Zubeldia.

Astana had taken over the pace making duty with Sanchez and Landa and it was hurting Dumoulin. The Dutchman looked unusual in this company, being about twice the size of everyone else, but he hadn’t given up on the GC yet. He was dangling at the back of the GC group but, importantly, he had reached the easier middle section of the climb and with it, a chance to recover some energy.

Haimar Zubeldia was still fighting the inevitable and with 6km to go he was still clinging onto his 1 minute advantage. Giovanni Visconti (Movistar) was dispatched by Quintana to increase the pace as they emerged from the ‘flat’ section into the steep final ramps.

With 3.5km to go there was still no attacks from the GC group. The pace was high but regular and Dumoulin was able to put his head down and stay in contact but he was a long way down the group. With 2.5km to go Zubeldia was still alone but with only 10 seconds of advantage. Visconti had been usurped as Astana once again took over the pace-making. It was too much for Dumoulin who was finally distanced, if only by 20m. They were on the hellish final slopes and Mikel Nieve (Sky) was the first man to attack. He was brought back by Valverde (Movistar) but the pace was easing, still Quintana didn’t attack.

The steepness was tortuous but still there were no attacks from the lead group, it was suiting Dumoulin who was grinding back into contention. With 1.5km to go he had just 20 seconds to make up. Rafa Majka (Tinkoff-Saxo) moved to the front to try and put more time into the big Dutchman but still, there were no attacks from the GC men with 1km left to ride. The lead group were attacking as a carrot for Dumoulin who could see them as he kept tap away a rhythm on a large gear. 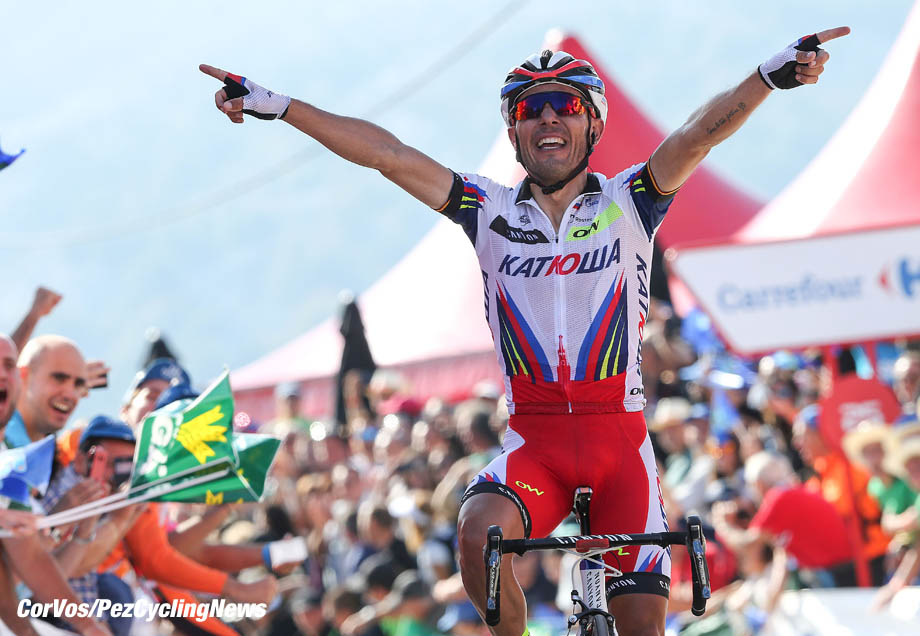 A well deserved win for Joaquim ‘Purito’ Rodriguez, but 1 second short of the overall lead

The finalé
With 900m left to ride Joaquin Rodriguez (Katusha) hit the front followed by Fabio Aru. Quintana was able to follow but soon he found himself heading backwards along with Esteban Chavez (Orica-GreenEDGE) and Valverde. Rafa Majka was the surprise and he was clinging to the race leaders wheel as this trio went away. Behind, Dumoulin was finally succumbing to the gradient and his gap was drifting out to 1.30.

Rodriguez was gaining time on Aru and Majka and as he came inside the barriers it was clear that he would take the stage and the victory. Quintana, Chavez and Valverde were clawing back time on Aru and they crossed the line just 12 seconds behind the veteran Spaniard. Dumoulin continued to surprise, after looking like he would fall away significantly inside the final kilometre he was able to cross the line less than one minute behind the stage winner, job well done.

Joaquin Rodriguez took a stunning stage win but failed to unseat Aru as the race leader, the Italian leads by just one second. Majka’s late surge to the line was enough to take third from Dumoulin, again by one second. Tomorrow now becomes even more serious to the race, Quintana needs to attack to reduce his 3 minute deficit and Rodriguez will feel that he needs more time heading into Wednesday’s time trial. There’s only one man in the top 10 who can time trial, the big Dutchman, if he can just about cling onto the coat tails of the little climbers tomorrow then we’re in for a classic final week. 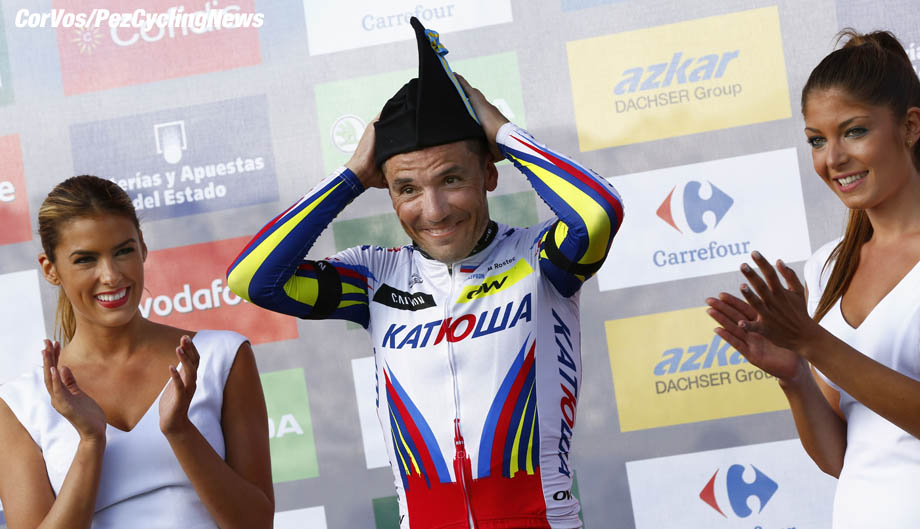 ‘Purito’ took the stage and the hat, but not the red jersey

Keep it PEZ for all the news from Spain.