Race report: Nairo Quintana laid down the most impressive marker so far in this Vuelta with a clinical stage win at the iconic Lagos de Covadonga. The diminutive Colombian climber used his Movistar team perfectly throughout the stage and then put Alberto Contador to the sword to take back his race lead.

Chris Froome, who’d looked in big trouble as the day’s closing climb began, produced a stunning recovery to haul himself to within half-a-minute on the stage.

How it went down: Today’s 10th stage headed from Lugones to Lagos de Covadonga, 188 kilometers and a finish in the skies on one of the Vuelta’s most famous summits.

With a monster climb at the end of the day, there was a terrifying fury to the early breakaway attempts – so much so, that the peloton performed an ensemble asphalt ballet that put Huzarski (Bora-Argon 18), Reza (FDJ) and Irizar (Trek-Segafredo) out of the race.

The warp speed split the peloton, briefly catching out Gianluca Brambilla. With the Italian stuck in a mini-peloton, chasing a flying main field, Etixx – Quick-Step had an interesting dilemma. Drop back to help their better long-term GC hope, or stick up front with overall leader David de la Cruz? The problem was resolved when a bigger break established itself up front and the peloton slowed allowing Brambilla back on. 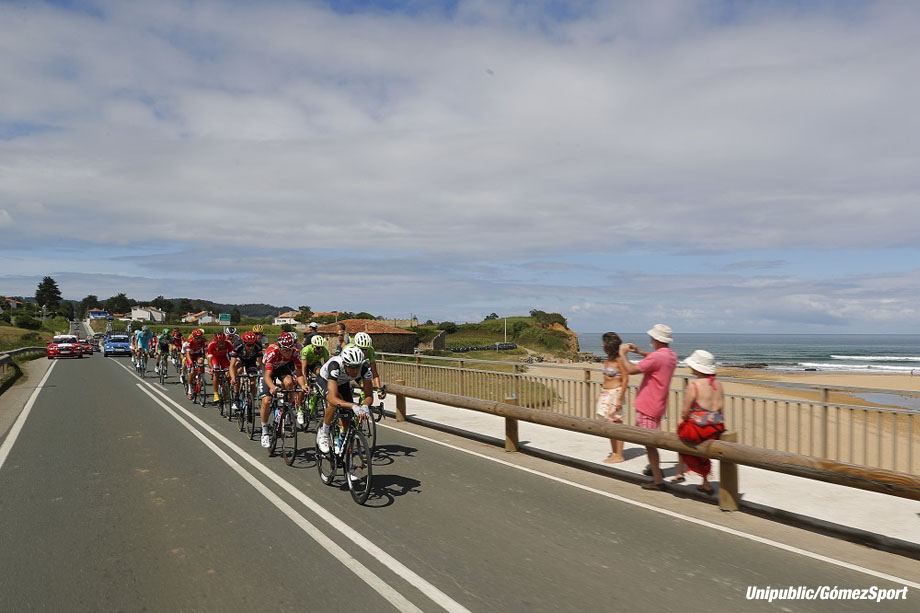 Etixx – Quick-Step chased, but not crazily, and things stabilized at three-and-a-quarter-minutes after 100 kilometers of riding. The Belgian squad got a helping hand from Movistar, and as the race roared towards the Alto del Mirador del Fito inside the final 60 kilometers, the gap has fallen from a five-minutes-plus high to just over three minutes.

Movistar reined themselves back a little on the Mirador, saving their strength for the last assault on Lagos de Covadonga, and the gap to the escapees yawned open once more. Maté went for the mountains points, but Fraile blasted past him as he looked to back up last year’s Vuelta King of the Mountains crown.

The pair kept their attack going on the descent towards Arriondas, and then the final haul up to Lagos de Covadonga.

The race moved past the Hostal el Capitan where the legendary Miguel Indurain quietly wheeled away from his career twenty years ago.

Onto the beast of the climb itself, the breakaway began to eat itself from the inside out. Gesink took some of the pace-making duties, with Gonçalves and Maté before Vervaeke made the first big jump at 11 kilometers to go.

Rolland dragged a handful over to the Belgian, as Movistar upped the pace in the peloton, putting Froome out the back. The Tour de France champion dangled with a couple of team-mates – not quite dropped, not quite comfortable either.

Rolland forged on alone, before Gesink started to claw him back with the stage win there for the taking inside 7 kilometers to race. 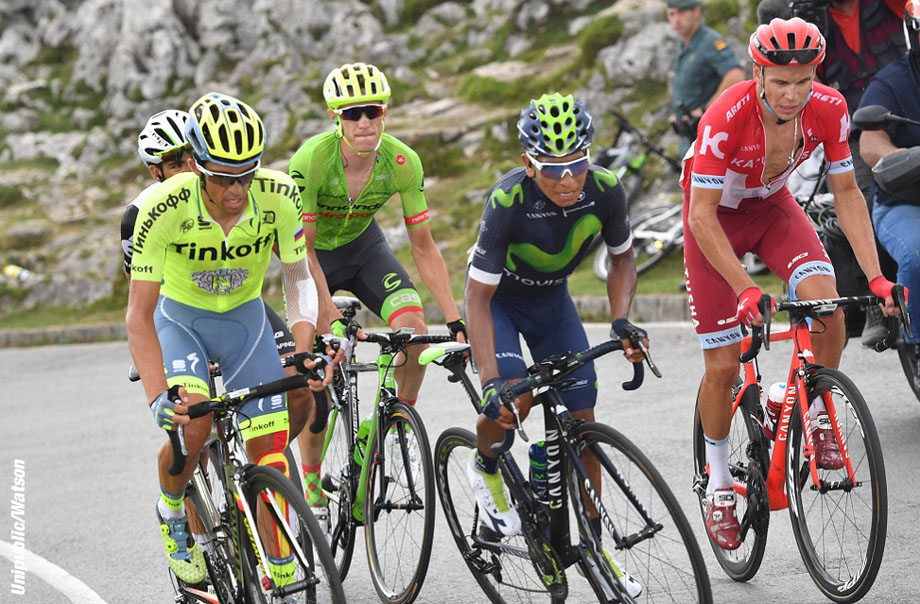 The General Classification race lit up on the lower slopes, with Contador going first. Almost immediately, Quintana responded with a huge dig and the duo were flying away from the other contenders, sweeping past struggling breakaway riders like comets flung from orbits.

Froome had been dropped for over 40 seconds but then staged a Lazurus act, refinding himself and blazing uphill at a rate of knots. 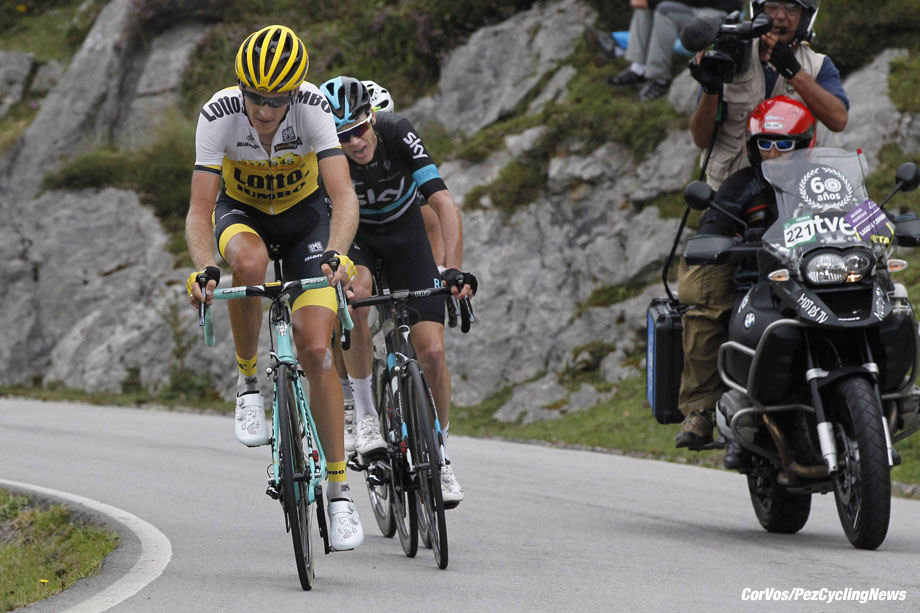 Approaching three clicks to race, Gesink was still solo out front, but Quintana had made another effort to dislodge Contador. Froome was about 20 seconds behind the Colombian, with Alejandro Valverde clinging on for dear life. 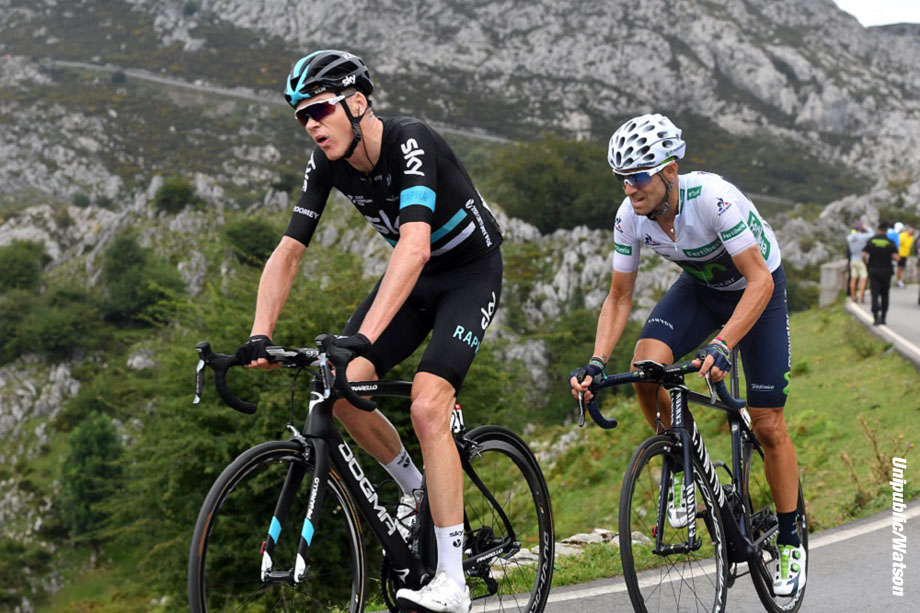 Quintana kept the pedal to the metal all the way to the line, pulling out 25 seconds plus the bonus 10 seconds, as Gesink hung on for second ahead of the charging Froome. Contador lost a minute and change, the other contenders suffered more. 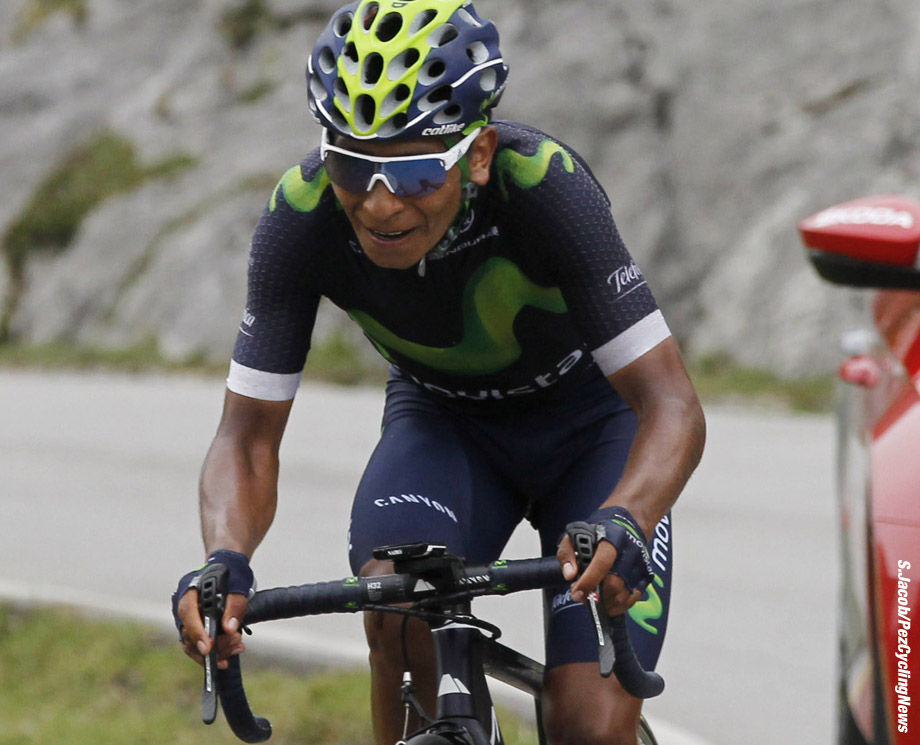 Heading into rest day one, however, it is the Colombian commentators who will be screaming the loudest. Quintana looks the part – he has his team-mate Valverde in second at 57” and is 58” clear of Froome. Contador is all but three minutes down and will have some serious head-scratching to do over the next couple of weeks.

BMC Head Back to Norway for Tour des Fjords