Race Report: With Astana, Trek-Segafredo, Team Sky and Movistar all using up precious energy, the day almost went to a brave lone attack from Dries Devenyns (IAM Cycling). Like so many times before, it was not to be and it came down to a sprint finish taken in fine style by Orica-BikeExchange’s Jens Keukeleire. The man from Bruges hit the front and held the others all the way to the line. A strongman’s sprint if ever there was one. 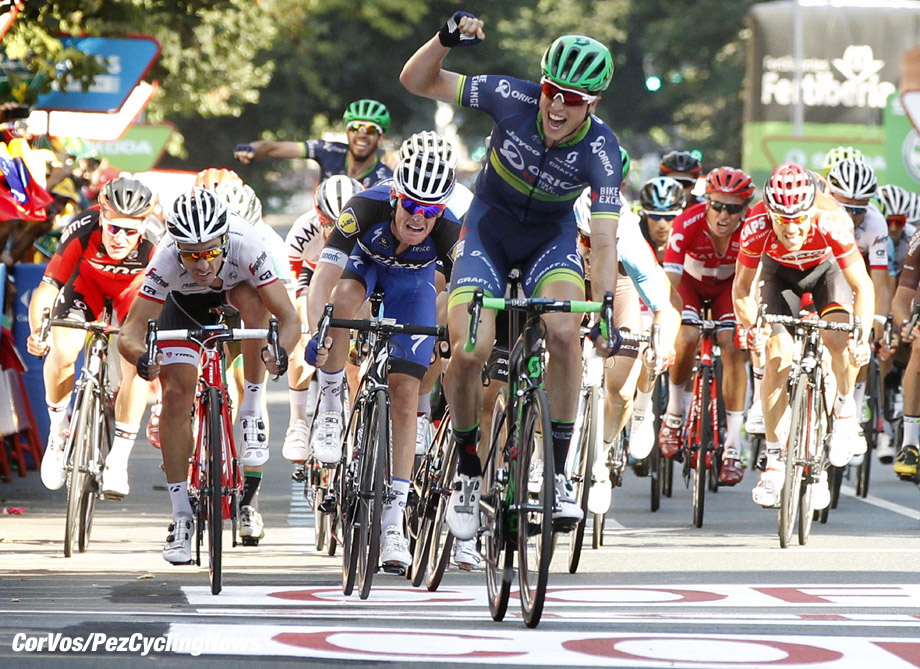 Slow Start
It was always going to be a long day in the saddle today as the riders covered 193km from Los Corrales de Buelna in Cantabria to Bilbao, the capital of the Basque Country and once well known for being the source of good Spanish goalkeepers but now more famous for having the spectacular Guggenheim Museum. With several climbs along the way, including the 1st cat Puerto de las Alisas and then two runs through Bilbao and twice up the 2nd cat Alto El Vivero before finishing in the city itself, it looked like a day for a breakaway, but one that would be reeled in before the finishing straight.

And try to get away they did. A 14-man group headed up the road but with riders like Brambilla (Etixx – Quick-Step) involved some teams were not too happy and brought it back, Astana and Trek Segafredo chief amongst those.

As the road began to rise up others tried their luck but nothing was sticking. With not a great deal to report on, talk in the pressroom turned to the issue of power meters and their use. Nairo Quintana (Movistar) has been quite outspoken against using them during races but Chris Froome (Team Sky) believes that progress can’t be held back. Former pro’ and now tv pundit, fashion guru, British Cycling consultant, Maserati ambassador (where does he find the time?) David Millar stated that knowing what your output is doesn’t make you go any faster. It just allows you to pace yourself better. Seems to be a bit of a storm in a teacup.

The other topic of discussion was on team sizes…in the Olympics the teams were restricted to 7 riders whereas grand tours have 9. The racing was every bit as exciting with just 7 and it would mean more teams could compete in the bigger races…although there would be an added cost to the organizer such as ASO so that might be the deciding factor.

Kicking Off
And then the riders started attacking and the journalists were forced to concentrate. Coming up the first mountain, a not particularly steep ascent, the bunch was moving at a fair speed but this didn’t stop some riders clipping off the front.

Groups were jumping ahead and then being pulled back only to see others make a move. Omar Fraile (Dimension Data) and Brambilla were determined to go clear but once over the top, the summit points taken by David Lopez (Team Sky), a group managed to establish a small lead. They were: David Lopez and Peter Kennaugh (Sky), Darwin Atapuma (BMC), Louis Meintjes (Lampre-Merida), Romain Hardy (Cofidis), Gianluca Brambilla (Etixx – Quick-Step) and Kenny Elissonde (FDJ). 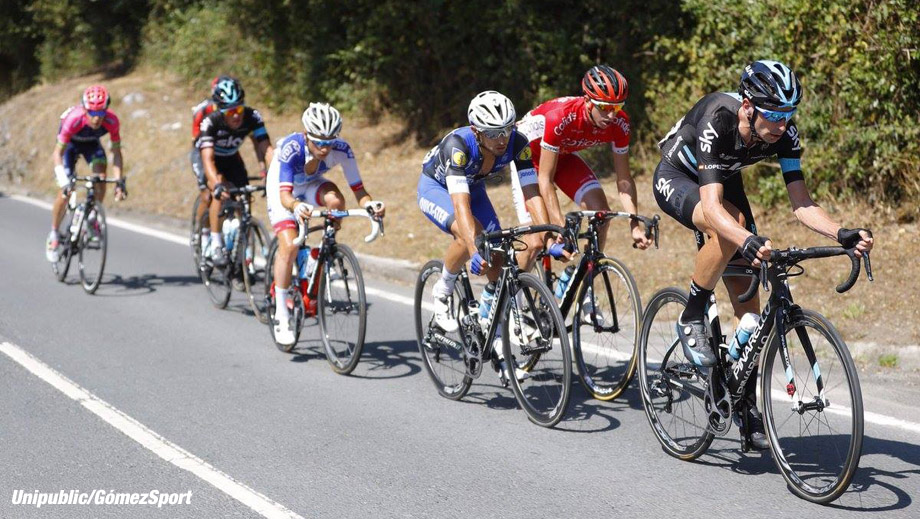 Movistar though were keeping them from getting too far away and approaching the second climb of the day, the Alto La Escrita, they only had a lead of just 2 minutes.

Cautious Descending
Over the top and onto the tricky descent and the first rider to suffer was Atapuma as he went down on a curve. He was soon up and away but with Movistar motoring along, his companions couldn’t wait for him. A bike change and a trip to the medical car saw him as far back as 1:15 at one point but despite trying to catch the break he had to give up and was absorbed back into the peloton. Hardy, who had lost contact briefly on the first descent, also struggled to stay with his companions on the second.

None of the riders ahead gave Movistar any real cause for concern regarding the overall but with two Sky riders up they road, they were worried that Team Sky might be planning something involving Froome later in the stage.

Splintering Ascent
Movistar had been keeping the gap respectable but with the race now coming through Bilbao for the first time others began to take over. Astana sent a man to the front and began to share the duties of pulling the break back. They had tried earlier to put a rider in the move so they were clearly thinking of trying something.

Onto the climb and Hardy was struggling from the off. Lopez also felt the pressure but got back on only to be distanced once more. He would grit his teeth and get back to the break on the descent but it was Elissonde who went over first from Brambilla and Kennaugh.

Astana had now sent another rider to the front of the bunch and the gap began to drop steadily. Into Bilbao for the second pass and it was down to 50 seconds. With Kennaugh and Brambilla present the peloton had decided to reel them in. As they made the technical turns and then passed through the finish for the penultimate time the gap had been reduced to 26 seconds…not surprising as the whole Astana team was now stretching the peloton in pursuit. 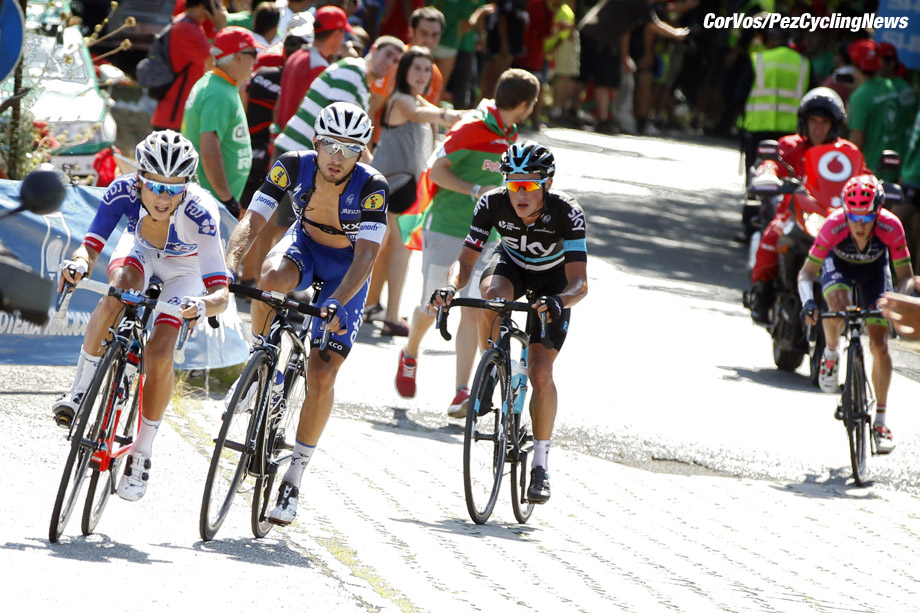 Elissonde, Brambilla and Meintjes all made little attacks off the front and this had the effect of keeping the gap around the 30 second mark but it wasn’t looking like they’d survive on the final ascent.

Last Time Up
And then it was suddenly all over as Astana rolled up to the last of the breakaway, Lopez having drifted back already.

First to show was Dries Devenyns (IAM Cycling) as he went up the road with 17km still to run. The fast chase from Movistar and Astana had reduced the main bunch to around 50 riders and it looked like this would come down even further after going up the climb for the last time. 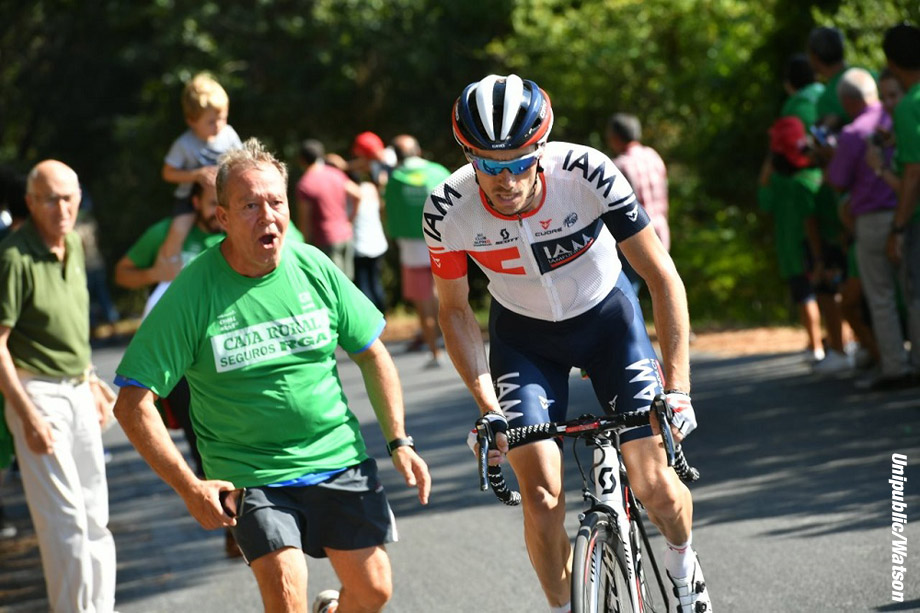 Devenyns had a gap of 30 seconds as finally others tried to get across. A small group of three formed by then Alberto Contador (Tinkoff) shot off the front of the bunch and sailed past the next set of pursuers.

No longer a threat to Quintana or Froome, they stayed with him anyway as the move looked good. With the crowd pushing in and narrowing the road, gaps were appearing and groups were forming but over the top it was still the IAM rider followed by a group of seven riders including Formolo (Cannondale-Drapac) and Dani Moreno (Movistar) at 29 seconds. 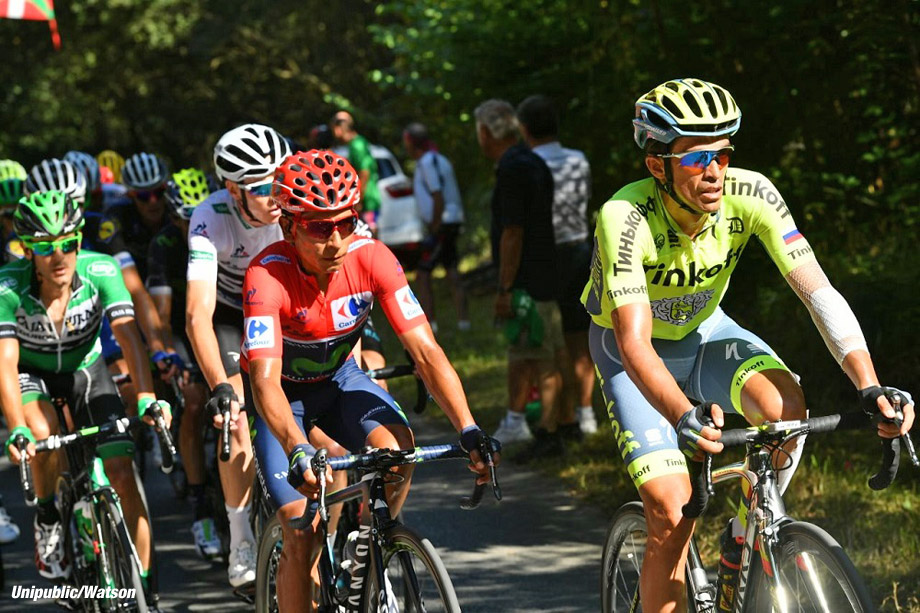 Contador was back with the other GC leaders as they chased down the pursuers with Devenyns out front and being chased by George Bennett (LottoNl-Jumbo).

Flashing down the mountain and hitting speeds of 70kph it would be touch and go for the Belgian rider. Hitting the bottom of the climb he had 26 seconds with 4km to run.

Zubeldia (Trek-Segafedo) pulled the bunch up to Zeits and he had Simon Yates on his wheel…and then suddenly they had a small gap but that wasn’t what they wanted so they let the bunch come back to them…Devenyns now had 16 seconds with 3km to the line.

Final Run
And then Devenyns was caught at 1.5km as Yates pushed up the road but it was all back together at 1km to go.

Into the difficult double right-hander and it was Yates leading the bunch through but they all spread across the road as Castroviejo and Stybar began to wind up the sprint. Orica-BikeExchange had played a blinder though as their strongman Jens Keukeleire hit the front and held it all the way to the line in top sprinting style.

Another stage for the Australian team but Astana and Movistar ended the day with nothing to show for all their work…well, of course Movistar still had the Red Jersey but they’d used up a lot of energy in protecting it. No change in the overall and another day closer to Madrid!