Race Report: Valerio Conti took advantage of the rolling finale to go clear from a 12 man break as the peloton took the day off behind. Stage 13 was the extra rest day the peloton didn’t take on Thursday and so they finished over half an hour behind the Lampre-Merida rider. Tomorrow on the Aubisque will be different. 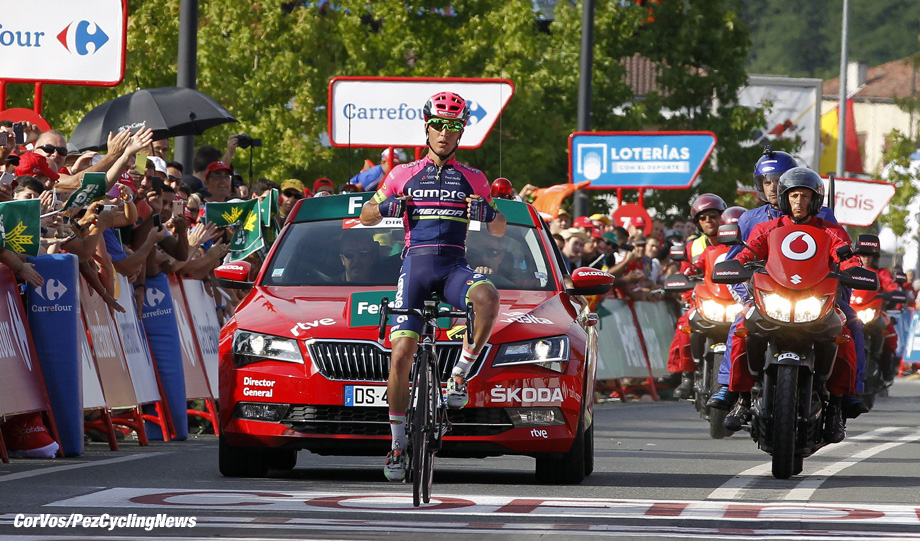 The longest stage of the race was a perfect day for a breakaway as Movistar decided to lead the peloton on a gentle cafe stop run and allow a 12 man break to gain almost thirty minutes. Michael Gogl kicked off the break and then started the hostilities inside the final 30km of the stage but his efforts were soon overtaken by Valerio Conti who went free on one of the many uncategorized rises. He was pursued by a strong group of five chasers; Laengen, Lagutin, Gogl, Wyss and Lampaert but they could make no inroads on the Italian. Conti took the biggest win of his career ahead of Wyss and Lagutin. Lagutin was the other major winner of the day as he led over every climb to move ahead of Quintana in the King of the Mountains jersey, something he will surely hand back on the Queen stage tomorrow. All of the GC riders were safely closeted in the incredibly slow moving peloton in preparation of that stage.

Route
The riders face what appears, on paper, too be an easier stage after a week of uphill finishes and testing grippy roads. They start from yesterday’s finish town, Bilbao, and head east to Urdax-Dantxarinea with a brief sojourn into France inside the final 50km. There’s four third category climbs on the menu with the final one coming 50km from the finish. The finale is far from straightforward though with a succession of tough uncategorized rises which will provide a perfect opportunity for an ambush.

Movistar were sat on the front of the peloton but with no one close to challenging Quintana’s jersey they were happy to let the break gain time. After just 40km of riding the break had an advantage of over ten minutes and that would continue to grow. 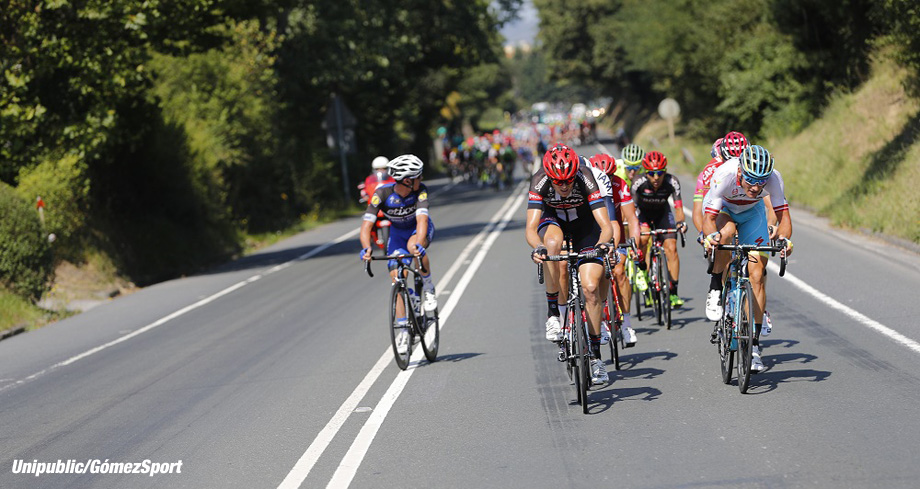 Lagutin took advantage of his time in the break to add to his king of the mountains tally and he led over the first three climbs to move to within two points of the jersey, currently owned by Quintana but on the shoulders of Omar Fraile (Dimension Data). The Russian, former Uzbekistan rider, took the final points on offer to ensure that he would be in the blue polka-dot jersey for the stage start tomorrow.

Inside the final 50km the break’s lead had flown out to an astonishing 22 minutes and it was now guaranteed that they would fight it out for stage victory. This realization led to the first signs of aggression as Gogl and Wallays went clear but Smukulis and Laengen put in a huge effort to close their advantage down.

Split Loyalties
The aggression shown by Gogl and Wallays hadn’t gained anything for them personally but it had completely blown apart the rest of the group. Conti was the next to attack but he was followed by a group of just five riders; Laengen, Lagutin, Gogl, Wyss and Lampaert. The rest were now caught in no mans land in the near 10km of space between Conti and the Movistar led peloton. 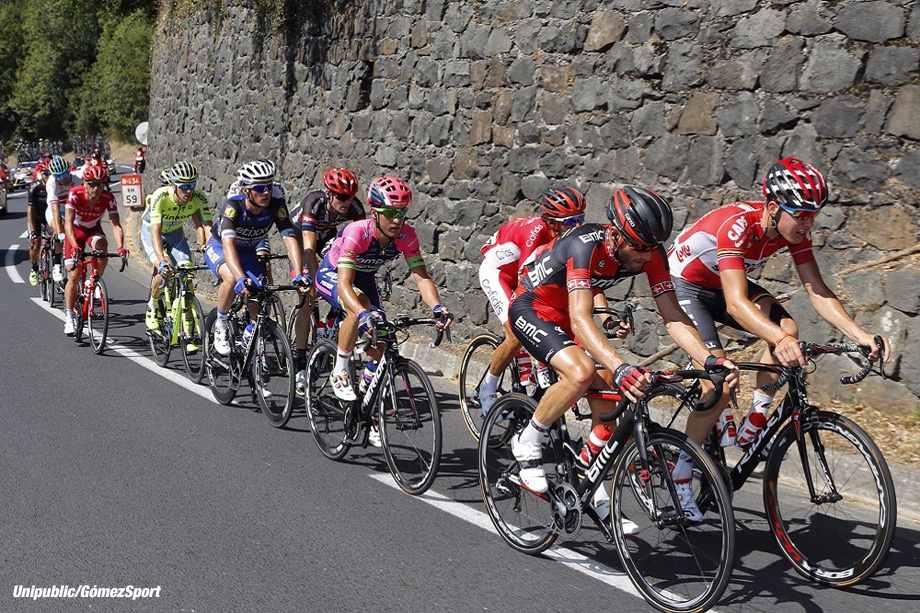 Conti was making the most of the uncategorized final climbs and he had eked out his advantage to half a minute. The five chasers were working well together but they weren’t making any inroads on Conti’s lead. Instead, the Italian was actually padding his lead and stealing extra seconds as they descended with just 15km left to ride. The peloton were happily spread out behind, they’d checked in any motivation after around 20km into the stage.

Conti was showing no signs of slowing down on the Basque roads and as he hit the final climb, which led them back into Spain, he was keeping hold of his 43 second lead despite the committed five men behind. Conti was clinging onto his substantial lead and Gogl was the first man to realize the urgency of the situation and push on. It wasn’t enough though and he was unable to make any inroads in the Italian’s lead.

Surely the Italian couldn’t keep pushing out his advantage but he was, he was now almost at the minute mark and with just 6km left to ride he could afford to take it easy on the way to securing his biggest ever victory. The five riders behind were still being aggressive but it was now just to determine who would be the best of the rest. 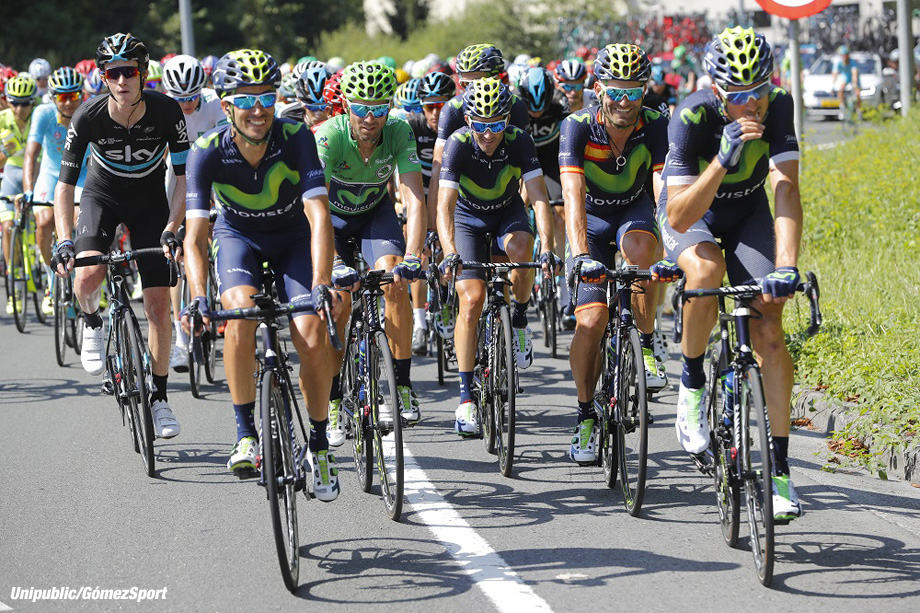 Conti actually stretched out his advantage to 55 seconds at the finish to cap off a perfect piece of tactical riding in the breakaway. Danilo Wyss and Sergey Lagutin finished off the podium but they had been outridden and outthought on the tough, rolling finale.

Behind them the peloton enjoyed the opportunity to have an easy day and prepare for the Aubisque finish tomorrow.

Keep it PEZ for the weekend mountain action.