Race Report: The summit finish of stage 3 of the 2016 Vuelta a España, allegedly, has the steepest bit of road ever ridden in the Spanish Grand Tour and that short piece of road showed the weaknesses in some of the top riders. There was a surprise solo win though, a good day for the French.

On a day when fortune favored the brave it was breakaway survivor Alexandre Geniez (F des J & France) who held on atop the Stage Three’s savage Mirador de Erazo climb and it’s impossible concrete grades, having been away all day. Chest bare, relief more than anything written over his face the tall Frenchman had just too much left for a Movistar inspired peloton which frenzied those crazy last two kilometers. 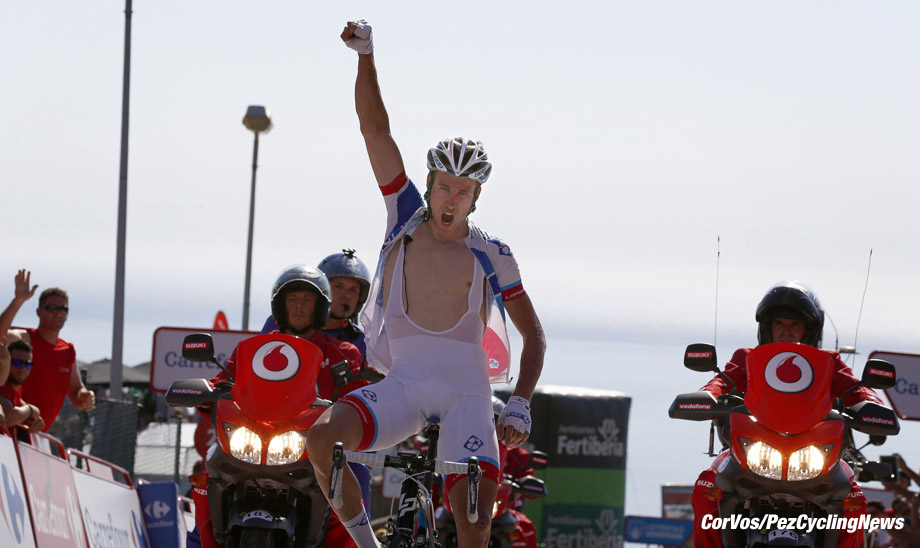 On a great day for Movistar it was their Spaniard Ruben Fernandez who took second spot and the coveted red jersey. That remarkable man Valverde (Spain) was third for the telephone team despite being in is third Grand Tour of the year. Chris Froome (Sky & Monaco) took fourth staging one of his trademark late charges through the huge, vocal but well behaved crowd.

Esteban Chaves (Orica-BikeExchange & Colombia) took fifth and cements his position as one of the favorites for this race. Nairo Quintana (Colombia) made it three in the first six for the Movistar men.

‘Oldie but goodie Spaniards’ Igor Anton (Dimension Data) and Sammy Sanchez (BMC) took seventh and eighth respectively whilst Alberto Contador (Tinkoff & Spain) cannot be happy with ninth place on a stage that would have been made for him in his heyday.

But not as unhappy as other ‘favorites’ Warren Barguil (Giant & France), Tejay van Garderen (BMC & USA), Angel Lopez (Astana & Colombia) and Steven Kruijswijk (LottoNl-Jumbo & The Netherlands) all of whom had days they would rather forget. 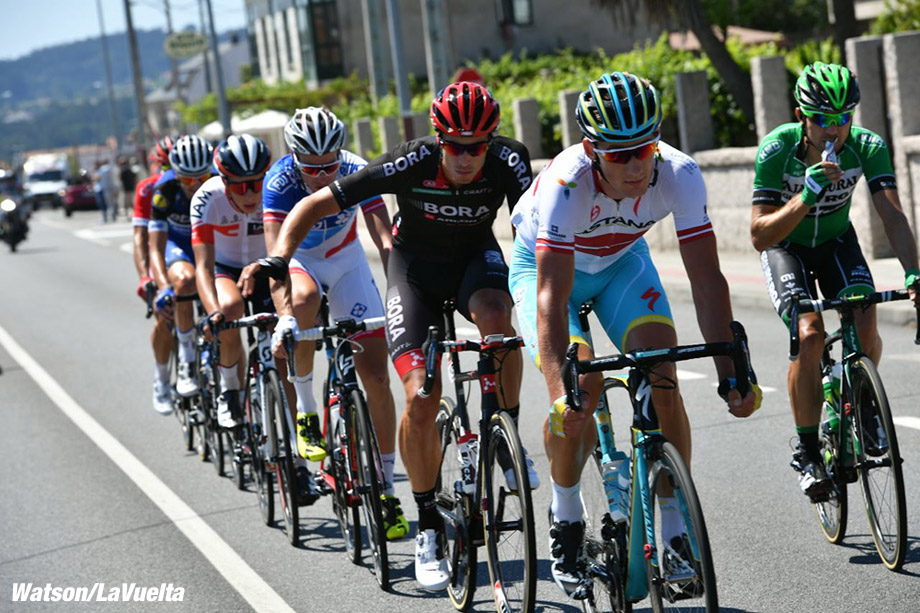 With the climbing all in the last 60K everyone was happy with the status quo – or as happy as you can be when the mercury is nudging 30 degrees. Sky tapped away to keep the gap around five minutes.

The shape of things right now – with 66K to go bears no resemblance to how things will look in the last five minutes when the grades rear to 30 percent. And what did we say about Barguil in the preview? ‘Perhaps a stage win’ – not now that he’s on the plane home, the first DNF of the 2016 Vuelta.

Pellaud takes the points after a squabble up the cat. 3 Alto de Lestaio then pushes on solo on the descent in search of more points on the cat. 2 Paxareiras, the next ascent of the day. One thing, no need to worry about fans getting in the way on the hills – maybe it’s too hot to be standing beside the road. . .

The gap up to Pellaud is now 6:40 inside 50 K to go with the young Swiss riding strongly towards the next climb on a day when the clouds are having a day off. The win is well possible here but it depends on how his erstwhile amigos in the break tackle the climb.

Despite the fact that the peloton is nowhere near ten tenths, there are riders sliding out the back door – it’s a long season. Pellaud is riding hard, still – but the climb stiffens as the 25K to go marker flashes past; Serry and Geniez aren’t too far behind and will have designs on that mountains jersey too. 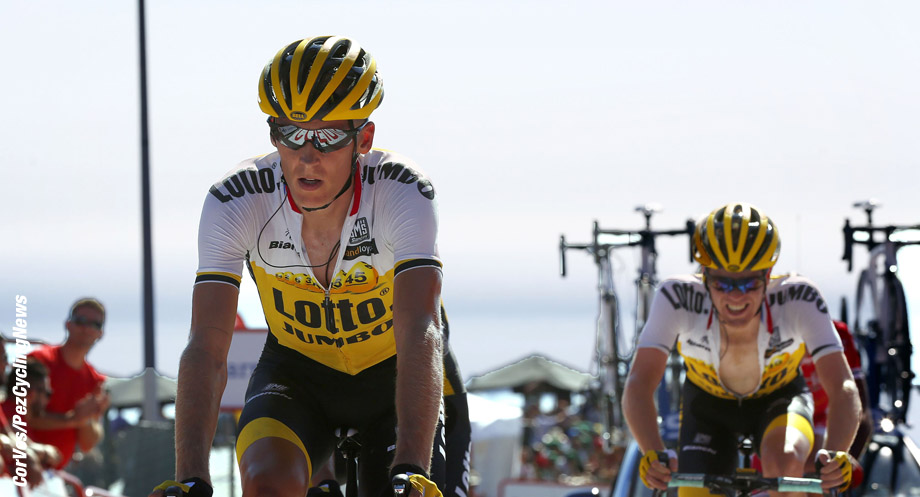 LottoNl-Jumbo have come up to chum Sky at the front – Kruijswijk must be feeling good.

Three now up front as Geniez and Serry grind back to the Suisse – 4:26 back to the peloton with 22.5 K to ride. It’s over for Pellaud, gone. Geniez is going very well, Serry clings on – one of these two could take the stage. . . They have 3:46 over the top where Geniez takes the points.

But Pellaud comes back on the descent as we hear Tejay is off the back, again. . . 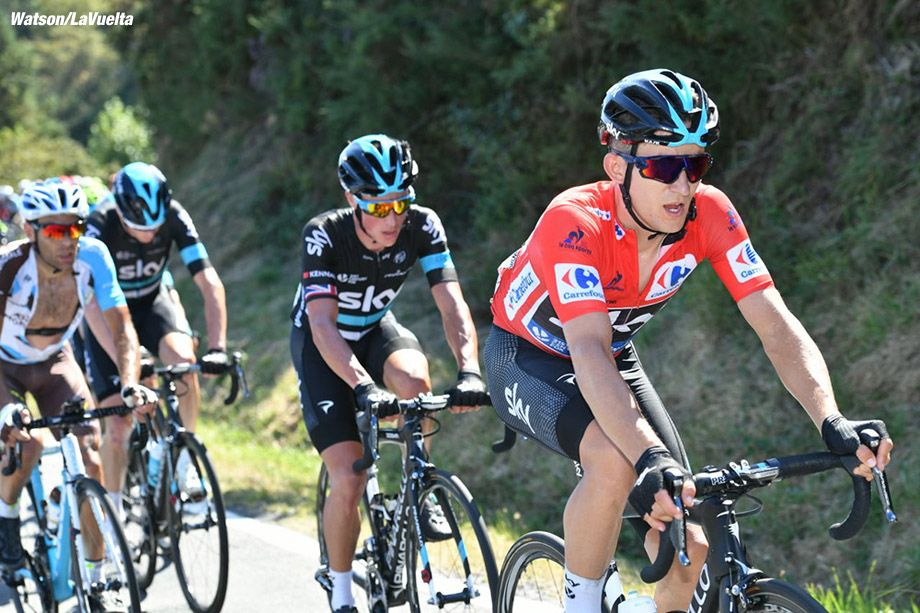 Kwiatkowski has taken up point in the peloton, red must be his favorite color. The three are on the flat before the final, brutal ascent of the Mirador de Ezaro, 1.8 K with stretches alleged to be as severe as 30% – not for the faint hearted.

Another one of the names from our favorites preview is not having a good day – Lopez of Astana has hit the deck and is losing time. The leaders are inside two kilometers to go with two minutes lead – it’ll be close. . .

Pellaud pops, the Geniez and Serry grind upwards – the peloton is rabid. Geniez goes solo and looks like he has some legs left and fights hard into the red kite. He’s on the concrete section, brutally uneven.

Movistar have four up front – is that young Englishman Carthy (Caja Rural-Seguros RGA) on their coat tails?

Geniez battles onwards, it is SO steep – this looks like his day as Pellaud and Serry succumb. 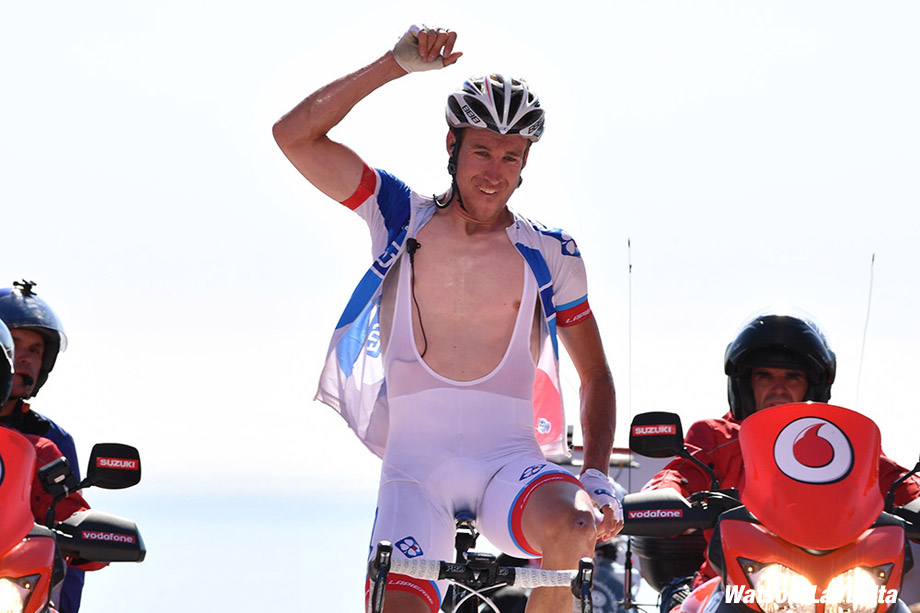 Ruben Fernandez is second for Movistar, his hands go high, the red jersey is his – even one day in red is so special for a Spaniard. Valverde takes third and Froome fourth; he’s made up a lot of ground in the closing meters – typical Froome. A great day for Movistar, a decent one for Froome, another below par day for Contador – but it could have been worse, Kruijswijk dropped two minutes and Barguil is away home. . . 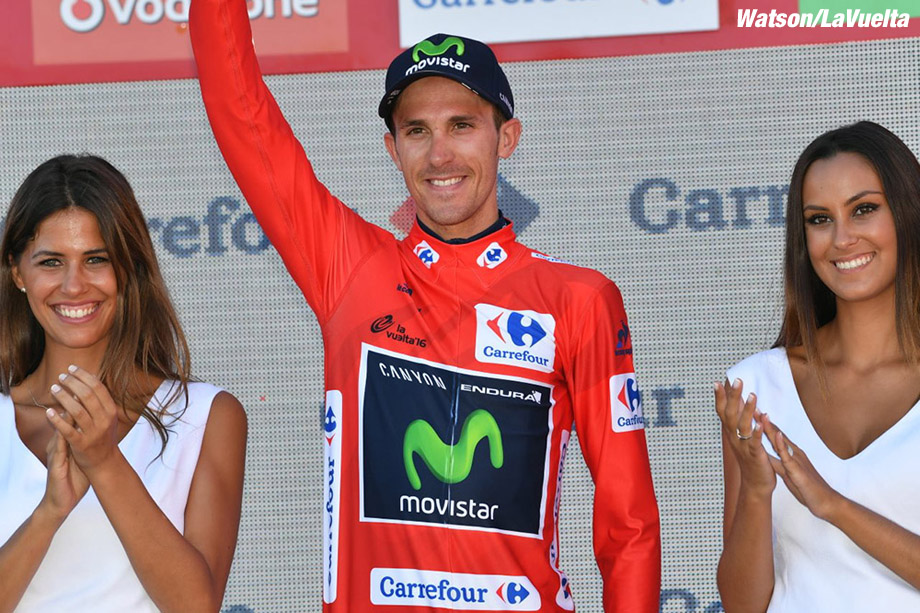