Race Report: Another day at the Vuelta, more wild racing, beautiful scenery, joy and despair. Gianni Meersman (Etixx – Quick-Step) built on Sunday’s stage two win, with another sprint victory. For the favorites, the predictable mayhem at the end of the day left a lot of riders nervous with twisting roads and tight corners to deal with.

How it went down: You’ve got 171kms to Lugo, it’s raining, you’re wearing lycra and there are almost 200 riders massed behind you. You have just one breakaway companion. Hit it!

That sinking feeling must have soon struck Katusha’s Tiago Machado and his buddy for the day, Julien Morice from Direct Energie. From the drop of the flag in Viveiro, they were off on a grand adventure, the main field huddled under dinner-plate-sized raindrops and Galicia’s leaden skies.

Although BMC gave a bit of a chase to try to keep any lead in check, even race leader Darwin Atapuma’s boys realized there was nothing too serious to get worked up about. Machado the masochist and Morice were left to get on with the suffering.

They pushed out along the coast, then faced inland from the middle of the stage onwards, all lumpy, rolling terrain. The advantage got within flirting distance of seven minutes with 100 kilometers to ride, but then steadily dwindled. Morice was clearly having delayed second thoughts. He has a background on the track, and is a world’s track medallist, but this is a whole other dimension – from four-minutes-and-change in the pursuit to four-hours-and-a-kicking in a Grand Tour.

With around 75 clicks to go, Machado decided to go it alone as the weather improved. He was still over five minutes to the good over the top of the day’s only classified climb, the Puerto de Marco de Álvare.

Giant-Alpecin and Trek-Segafredo have a couple of the better sprinters at the Vuelta in Nikias Arndt and Niccolo Bonifazio, and those teams came forward to hack Machado’s lead to pieces. It was a minute-and-a-half with 30 kilometers left. 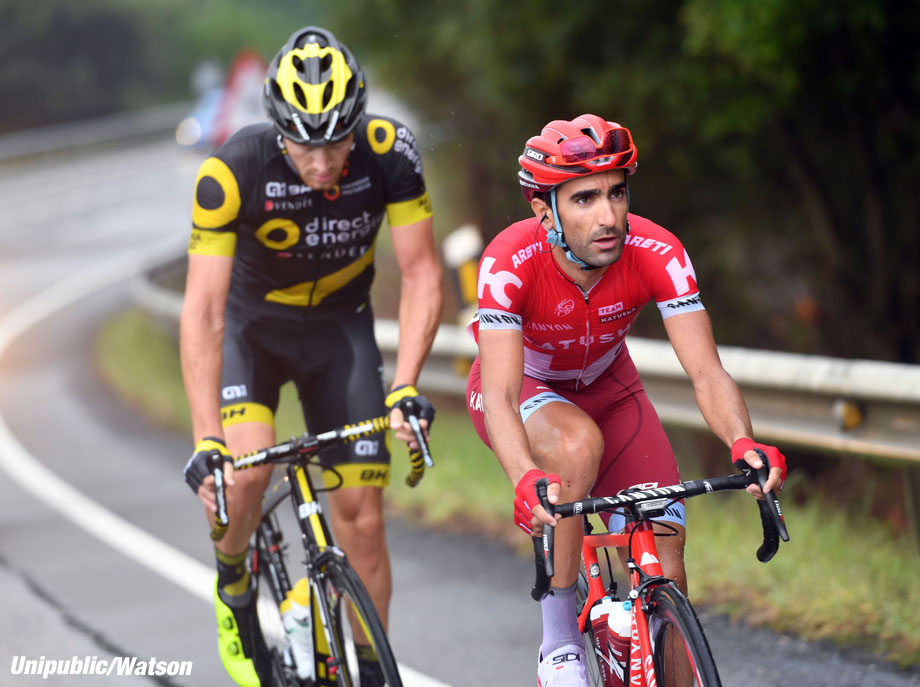 Etixx – Quick-Step took charge heading in to the last 20 kilometers. Then the heads of state sent their teams forward – Tinkoff, Sky, BMC, Movistar. That all did for the brave Portuguese, with Machado finally swept up with 15 clicks to ride.

Inside ten to go, Orica-BikeExchange and Bora-Argon 18 come through as well, and the speed hit painful heights. It wouldn’t be la Vuelta without some sort of scorpion sting lurking before the line. There was a short, nasty ramp from four to two kilometers to go. 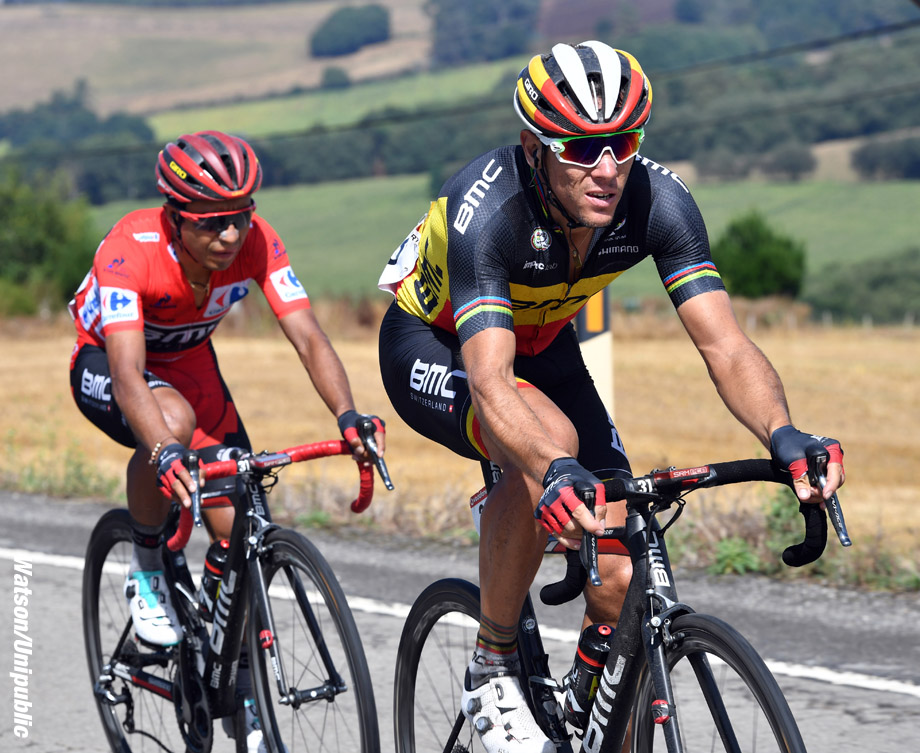 Lotto Soudal and Sky drilled it, rival trains, and then with 2.5 left Simon Clarke (Cannondale-Drapac) launched solo, chased by BMC’s Phillipe Gilbert. The Aussie narrowly avoided a horrendously abandoned car on the roadside. Past the old city ramparts, the lead duo were just seconds ahead.

Not so lucky, and coming down was LottoNl-Jumbo’s Steven Kruijswijk, out of the race with what looked like a collarbone break.

A nasty right-hander and under the red kite with one kilometer left and the bunch came together. Then another crash at 500 meters to go led to more chaos, with hurt riders down from Tinkoff and Direct Energie, and broken bicycle parts strewn on the road. 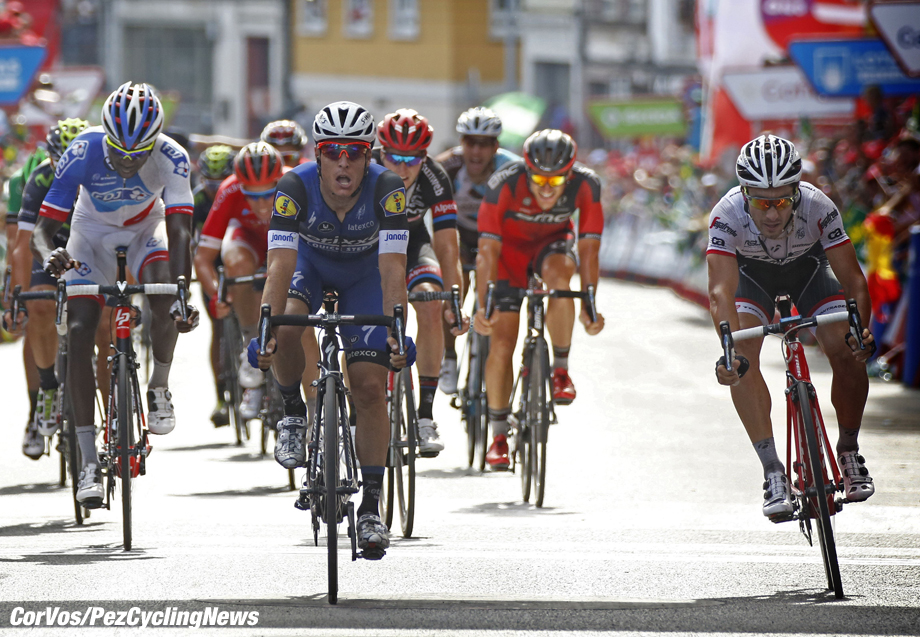 Stybar (Etixx – Quick-Step) led it out and Meersman held on just, although second-placed Fabio Felline might have fancied a chance of a protest and disqualification if he’d been Spanish. The Belgian wobbled distinctly off his line in the final, but Felline said right after the finish that he lost to the stronger man and had no problems with the outcome.

With all the crashes, it took a while to sort out the overall, but Atapuma held on to the red jersey, despite Valverde having stayed upright to contest the small group sprint. 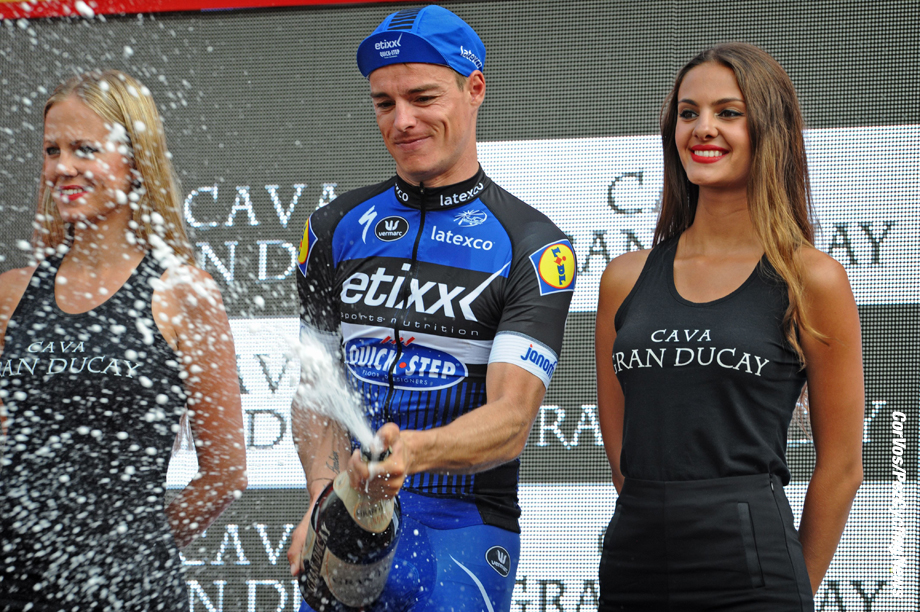 Keep it Pez for all the feedback in EuroTrash tomorrow!