Race Report: Another unpredictable day in Galicia for stage 6 of the Vuelta a España. Another solo winner, but not from the original break of the day; young Simon Yates attacked in the final 4 kilometers as the last of the break evaporated and solo’d his way to the line for the victory with 22 seconds in hand.

An exciting finalé of cut and thrust saw attack after attack in the jaws of a fast moving peloton. The break splintered on the undulating run-in to Luintra leaving Mathias Frank out front, but he was chased down by Dani Moreno and then Simon Yates. The young English rider wasn’t for waiting to see who might join him off the front and pushed on to the finish. He has also moved into the top ten overall. 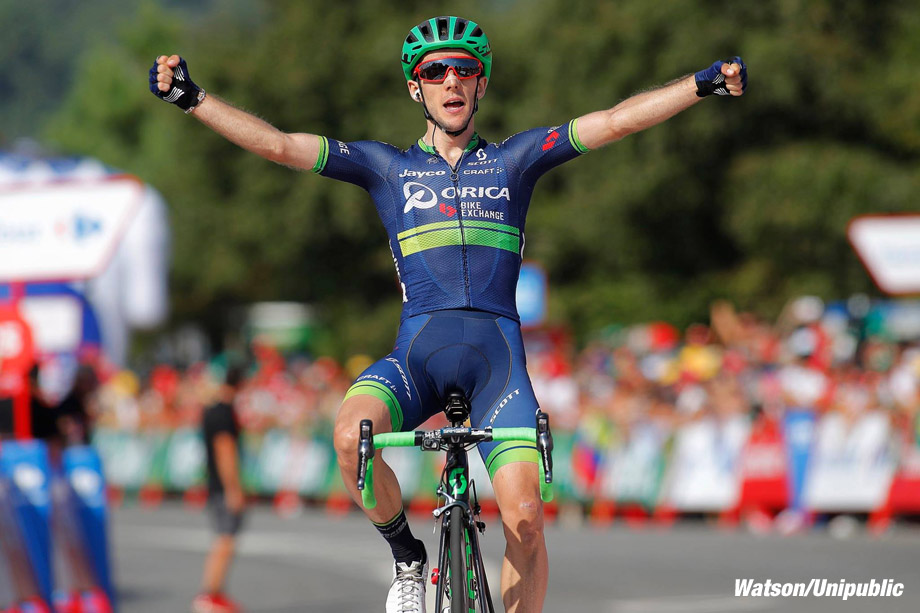 The Vuelta race book says there is only one climb on the 163 kilometer stage 6 from Monforte de Lemos to Luintra; the Cat 2 Alto Alenza which summits out after 115 kilometers, but from then on the parcour is far from flat or easy. In the final 5Ks the road climbs before a short descent and an uphill finish. A tough day for tough riders.

Three non-starters, Steven Kruijswijk (LottoNL-Jumbo), Robert Kiserlovski (Tinkoff) and Sébastien Minard (AG2r-La Mondiale), all were involved in the crash with an unmarked bollard in yesterday’s stage 5, close to the finish. Broken collarbone for Kruijswijk, lower back injuries to Kiserlovski and various injuries to Minard. Read more about it HERE in EUROTRASH Thursday. The Vuelta held a one minute silence for the victims of the earthquake in Italy at the start. 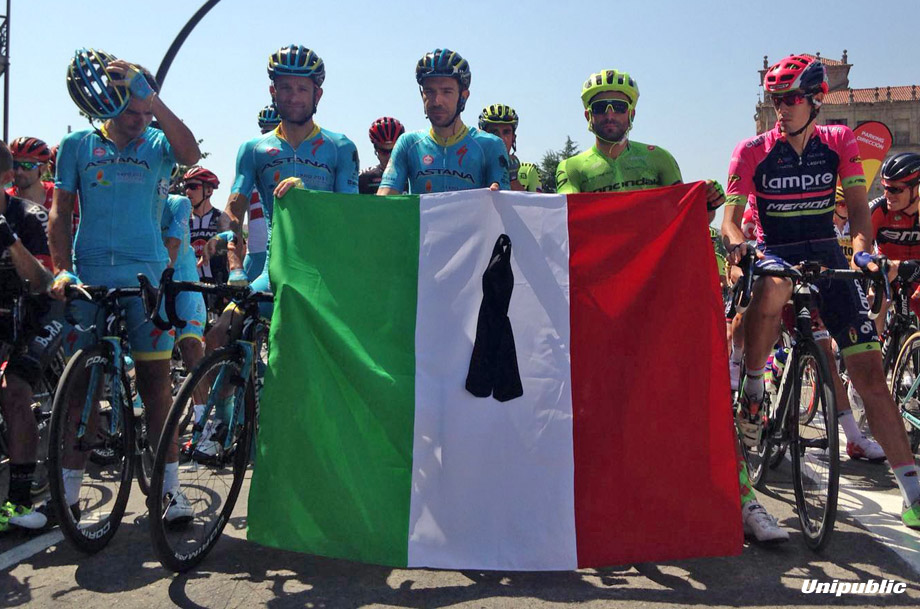 From the Gun
The racing was serious from the start with many riders wanting to be in the break of the day. Half a dozen groups formed and were pulled back by a very vigilant peloton in the first hour. Each group was of the wrong combination and was not allowed any space and so the first hour covered over 48 kilometers. Astana’s Miguel Angel Lopez abandoned, he has been in trouble since he crashed on stage 3, braking three teeth and had been having difficulty eating.

The second hour of racing was a little slower, but the average speed was still over 45kph. BMC had brought the gap down to 2 minutes with 65 hard kilometers remaining, but it was the Orica-BikeExchange team who decided to lift the pace again and bring the lead down to 1:30 at the base of the Alto Alenza, 60 kilometers from the finish. 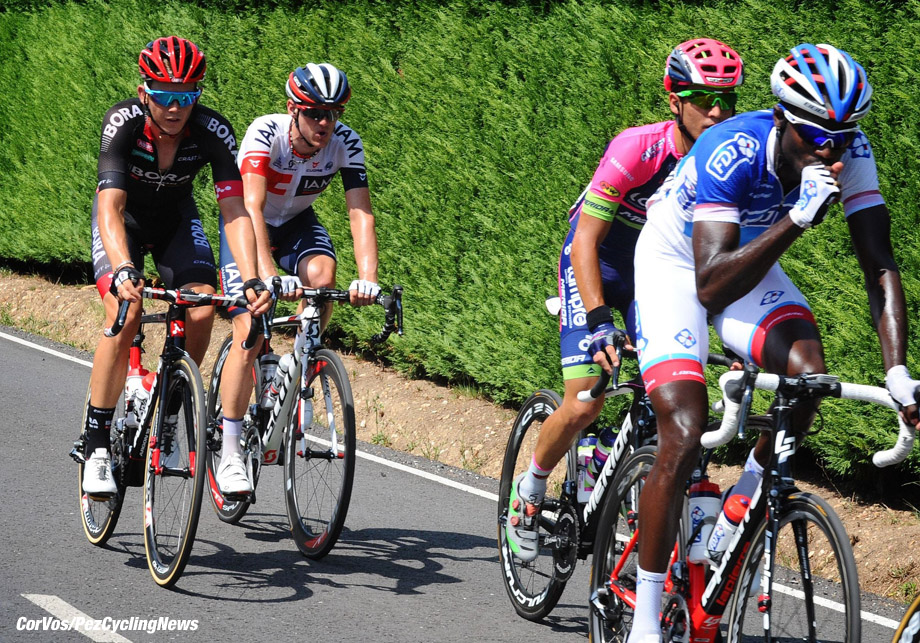 As soon as the escape hit the climb, it split and Omar Fraile headed off on his own and soon had 20 seconds on the break and 1:40 on the Orica led peloton.

As the race come to the final 50 kilometers, Fraile had extended his lead on the bunch to nearly 3 minutes as they pass through the town of Castro Caldelas where, strangely, the sprint and the mountain prime were both situated.

With 40 to go the race turned off a nice wide main carriageway to a narrow farm road. Fraile had 1:12 on the remainder of the break (Bakelants, Didier, Zeits, Frank and Losada) and 2:40 on the bunch now being led by Tinkoff. 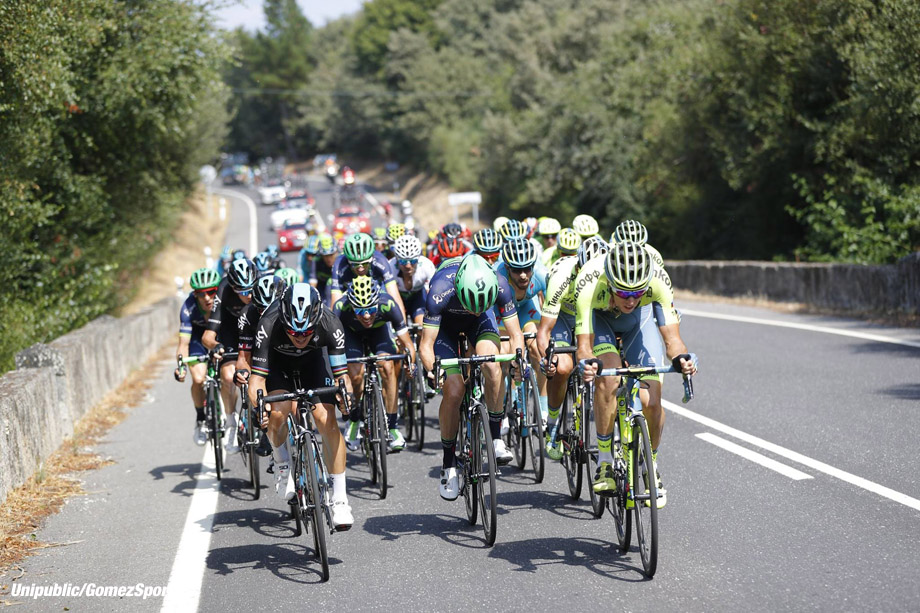 On the descent of the Alenza, Losada took the wrong angle on a tight bend and lost contact with the chasers who were at 1:22, with the peloton at 2:10. The next climb was uncategorized, but looked much the same as the Alto Alenza on the profile map.

Movistar took over the pace setting for the peloton which caused a split with riders losing hold, but the gaps stayed much the same with Fraile in front of the chasers by 1:12 and the important peloton at 2:00 as they entered the final 25 kilometers. Didier was dropped from the chase.

20Ks To Go
Fraile’s lead was down to 20 seconds and he was beginning to struggle, the peloton were at 1:20. At 19 kilometers he was caught and Mathias Frank immediately attacked and Fraile was dropped. Frank kept going and soon had a lead of 22 seconds on Zeits and Bakelants as Fraile sat up and was caught by the bunch with Movistar still doing all the work.

Frank hit the tree lined rise towards the finish town of Luintra (14km) with 30 seconds on Bakelants and Zeits and 57 seconds on the peloton, which still had the red jersey of BMC’s Darwin Atapuma safely amongst it with all the other top men. 10 kilometers out the situation was the same as Frank was giving it everything he had.

A crash in the peloton on a tight bend saw a Lotto Soudal rider go over the metal barriers and Lampre-Merida’s Louis Mentjens come down and need a new bike. 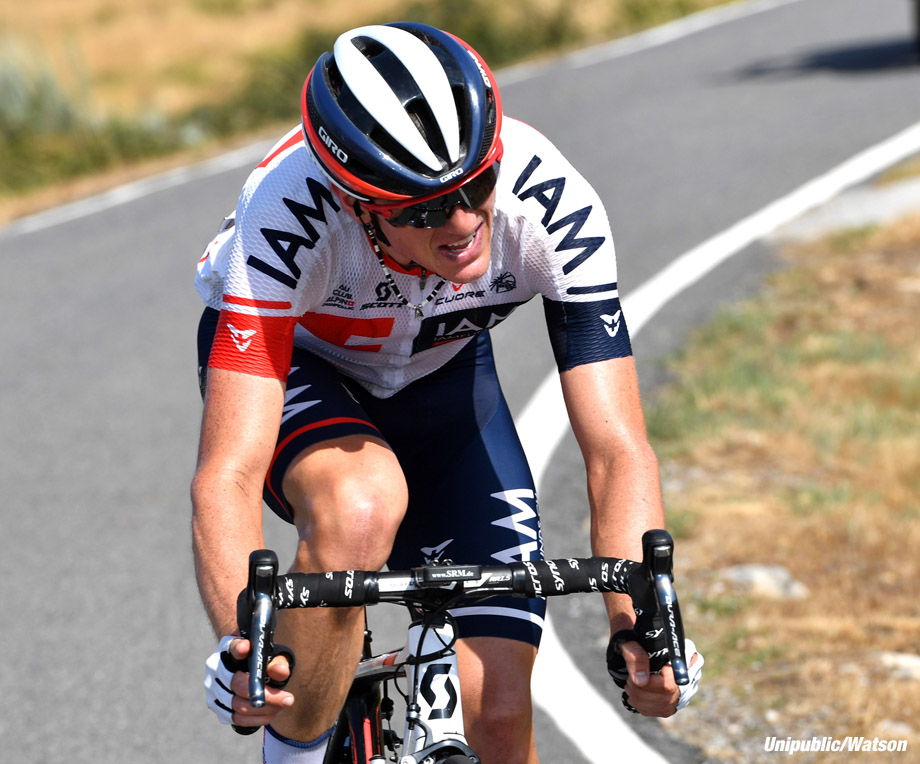 As Frank passed under the 5 to go banner the bunch caught Bakelants and Zeits as the Swiss rider only had 25 seconds. Dani Moreno (Movistar) attacked from the chasers and was joined by Simon Yates (Orica-BikeExchange) as they climbed yet another unclassified assent. Yates didn’t wait for long before jumping across to Frank and then dropping him to push on solo, 3.5K out.

Moreno was still chasing, he was caught by Ben Hermans (BMC), with Frank as a passenger, they try to catch Yates.

Yates the Winner!
Into the final straight and Yates knows he has the win and has time to raise both arms in victory, next up is Luis Leon Sanches (Astana) who had also crossed to the chasers with Fabio Felline (Trek-Segafredo) and Kenny Elssonde (FDJ) – the bunch were on their heels.

Another solo win in the 2016 Vuelta a España, but don’t forget it is still only the first week and there is a lot of climbing still to come. Atapuma finished alongside Valverde, Froome, etc., for the overall to stay the same, except Yates moves up to 10th overall at 1:28. 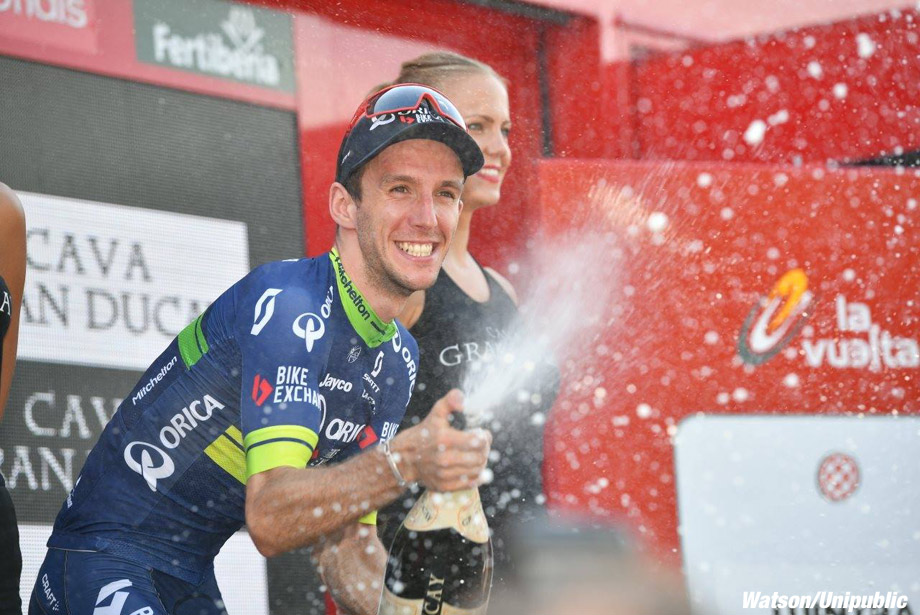