Race Report: Stage 7 was a complicated affair, with a hard parcour it was not a day for the climbers and not a day for the sprinters. In the end a sprinter won, although Belgian Jonas Van Genechten is more of a ‘puncheur’ of a rider, he was the best at the finish line. A crash in the finalé saw Alberto Contador hit the deck, but the overall lead stayed with Darwin Atapuma.

Another nail biting finish to a 2016 Vuelta a España stage. Not a solo rider like previous stages, but two riders; Luis Leon Sanchez and Simon Clarke held the peloton off for the final 20 kilometers before they were swamped by the charging bunch within sight of the finish line. IAM Cycling’s strongman Jonas Van Genechten led the charge past the faltering duo to take his biggest win. 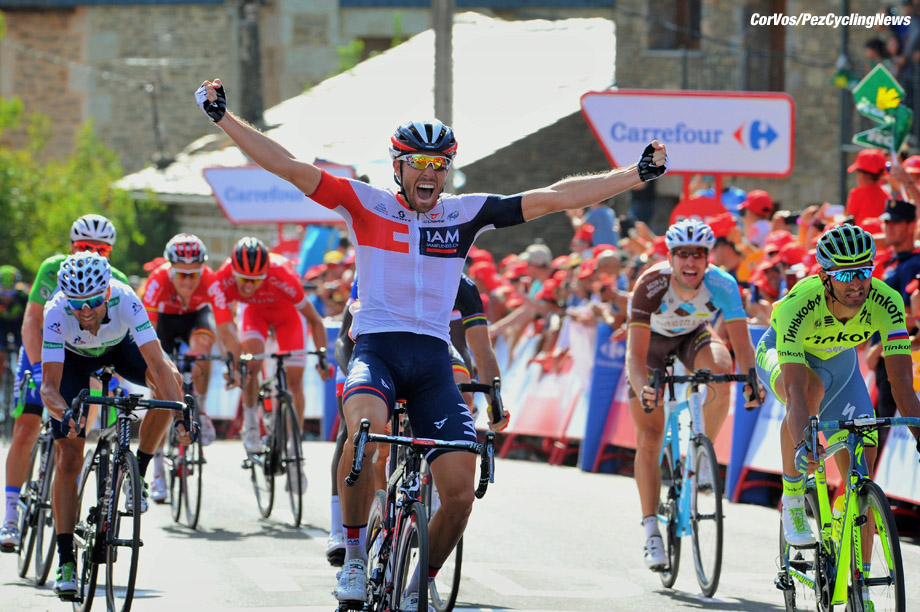 Stage 7 from Maceda to Puebla de Sanabria (153.3km) is another day of undulations, taking in two Cat 3 and one Cat 1 climbs before a downhill and flat approach to the finish. The first climb summits after 25.3 kilometers, the Alto de Allariz is just under 6K long and climbs 300 meters, it shouldn’t cause any problems, unless you are sick or injured, but will be a good place to start a break. The peloton hits the tougher Cat 2 Alto de Fumaces after 69 kilometers, the 12 kilometer climbs for 505 meters. From then on the parcours is all up-hill with the Cat 3 Alto de Padornelo coming 18.3 kilometers before the finish. Yet another hard day and one that could bring yet another surprise. 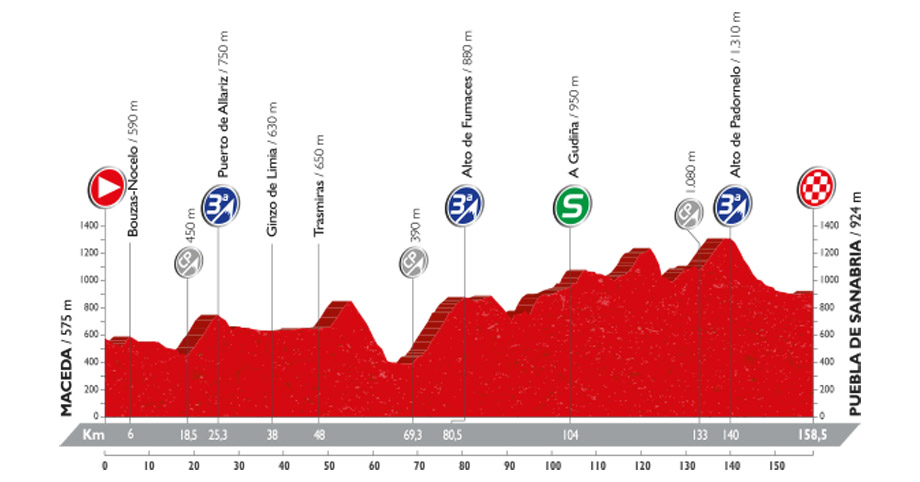 The First Attacks
It didn’t take long for the attacks to come and, like Thursday’s stage 6, all the early moves were chased down. Not long into the stage and race radio announced that Sky’s Michal Kwiatkowski had abandoned with back problems.

After around 15 kilometers a break of six managed to extricate themselves from the bunch, they were: Victor Campenaerts (LottoNl-Jumbo), Johan Le Bon (FDJ), Sander Armée (Lotto Soudal), Davide Villella (Cannondale-Drapac), Vegard Laengen (IAM Cycling) and Luis Angel Maté (Cofidis). By the time they hit the climb of the Alto de Allariz the six had nearly 2 minutes and by the KOM line the gap was 3:30, Maté was first followed by Laengen and Armée. The bunch was being pulled along by Trek-Segafredo and Giant-Alpecin. 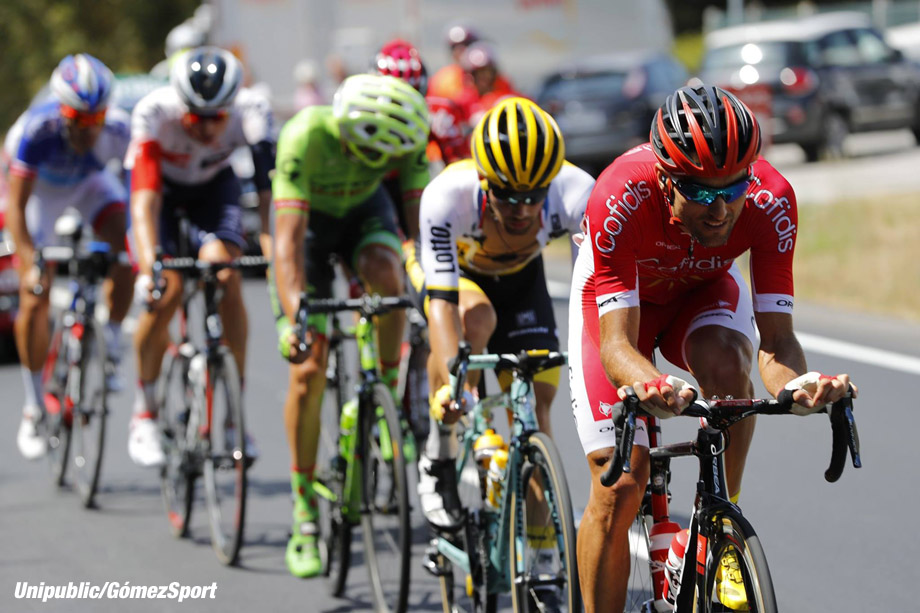 100K To Go
BMC and Etixx – Quick-Step begin to help with the chase work as the lead got close to 4 minutes and the six escapees were brought a minute closer within 10K. With 80 kilometers left to race, as they climbed the Alto de Fumaces, the leaders only had 2:24 in hand and it was not looking good. At the summit the lead was 2:07 and again it was Maté who took the mountain points. The peloton kept their pace and the lead dropped continually and at 60K out it was down to 1:32. Niccolo Bonifazio (Trek-Segafredo) abandoned.

Dimension Data’s Igor Anton was having all sorts of trouble at the rear of the peloton, he had visited the doctor’s car earlier in the stage and the word was that he had stomach problems. His biggest problem was that Astana had put most of their riders on the front and the speed had lifted to the point where the break only had 20 seconds (47km to go) on the peloton and Anton was 2 minutes behind.

It didn’t take long for the announcement to come through that Anton had abandoned. BMC had a slight scare as Samuel Sanchez was distanced due to a call of nature, he wasn’t alone and managed to regain the peloton, but his BMC teammates, including van Garderen had a big job on their hands as Astana were at full throttle. 43.4 kilometers from the finish and the break was over, although Maté and Campanaerts tried to stay out a bit longer.

Rein Taaramäe (Katusha) was next to abandon.

On the run-in to the final climb of the day, the Alto de Padornelo, Tinkoff came to the front with Astana, Movistar were also looking interested and had moved their men forward, but there was no sign of the red jersey of Darwin Atapuma or Chris Froome. 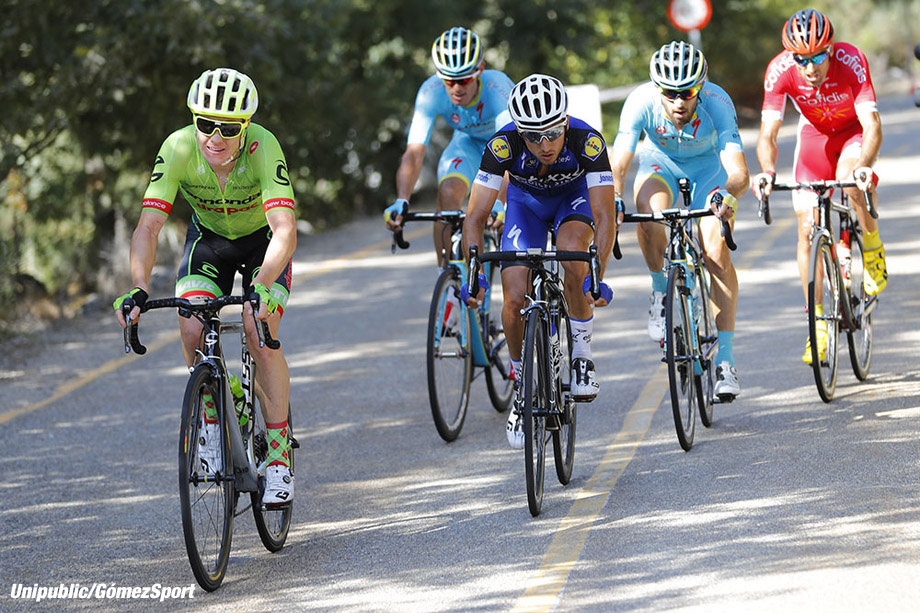 The lift in speed shook many a rider out the back of the bunch as the race passed the 30 kilometer banner, first to attack was Dario Cataldo of Astana. He was joined by teammate Luis Leon Sanches, along with Simon Clarke (Cannondale-Drapac), Gianluca Brambilla (Etixx – Quick-Step) and Maté (Cofidis) again. A chase group tries to cross to them, but the peloton pulled them back.

Another group tries to cross to the leaders, this time sparked off by Katusha’s Lagutin, he is joined by about six other riders, but it falls apart as more riders start to come forward from the peloton, eventually to engulf them.

The five leaders had a gap of 40 seconds as they climb the Padornelo with 22 kilometers to race as BMC put a rider on the front to hold things together. 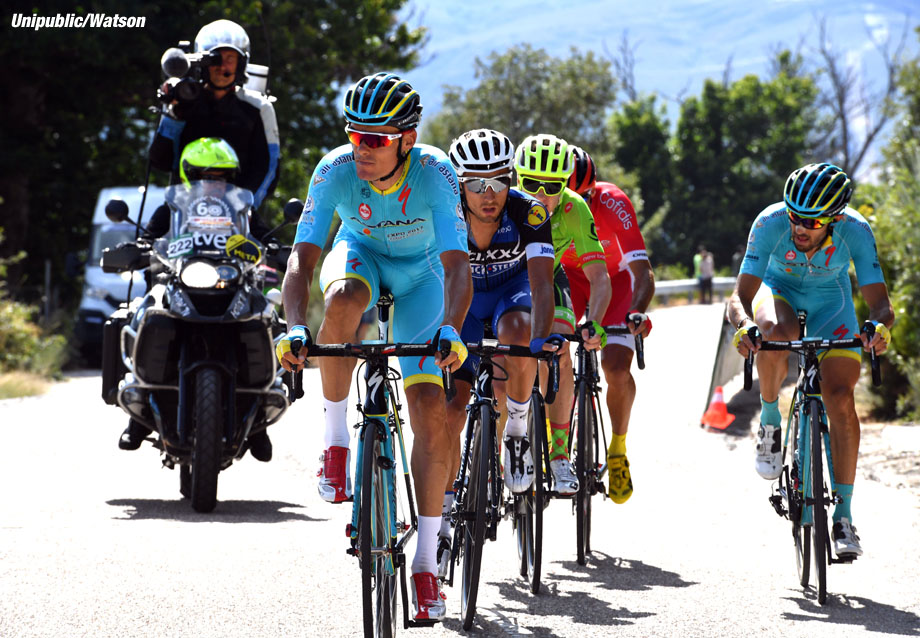 20K Out
43 seconds splits the leading five riders from the peloton 20K out. After they cross the summit they had a long, wide descent to the finish in Puebla de Sanabria. The peloton was riding at 90kph which was slightly faster than the break and so their advantage was dropping and they had less than 30 seconds.

10 kilometers further and the lead was 15 seconds and the break split to leave Sanchez and Clarke to battle on. Giant-Alpecin, Movistar and Trek-Segafredo had taken over from Astana and could see their pray just a matter of meters ahead of them, but Clarke and Sanchez were not going to give up and held the bunch at 15 seconds for a long time.

Etixx – Quick-Step joined in the chase as their man in the green jersey, Gianni Meersman, was still in the bunch and could take his third stage win. Clarke and Sanchez worked well together, the Spaniard taking longer turns, and into the final 2 kilometers they still had 12 seconds. Bora-Argon 18, Lotto Soudal and Tinkoff had now thrown their weight behind the chase.

The peloton was just behind the duo as they hit the final curve in the road when there was a touch of wheels and half the bunch hit the deck, including Alberto Contador and Samuel Sanchez.

Into the finishing straight and with 300 meters to go the bunch swamps Clarke and Sanchez with IAM Cycling’s Jonas Van Genechten on the front. Bennati, Valverde and Gilbert were on the Belgian’s wheel, but could not get past him.

At the finish Van Genechten admitted that this was his biggest win and “there are not many chances for a sprinter at the Vuelta, so I had to take my chance.”

Alberto Contador crossed the line with the shoulder ripped out of his Tinkoff jersey, not for the first time this year. 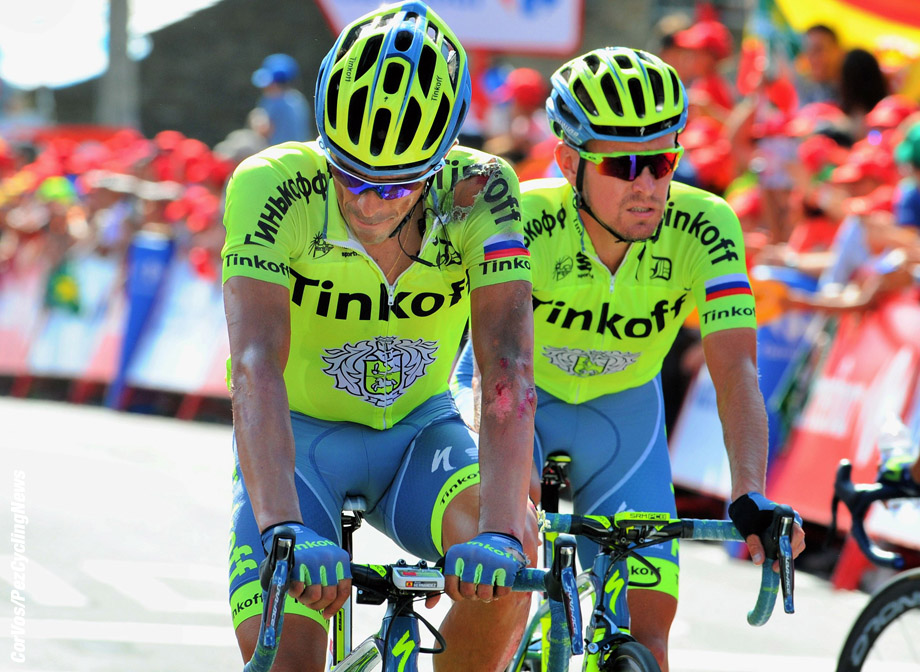