Race Report: David De La Cruz (Etixx – Quick-Step) rode a superbly tactical race and attacked with 700 meters to the line to take both the stage win above Oviedo and the race lead before the fearsome Covadonga tomorrow. 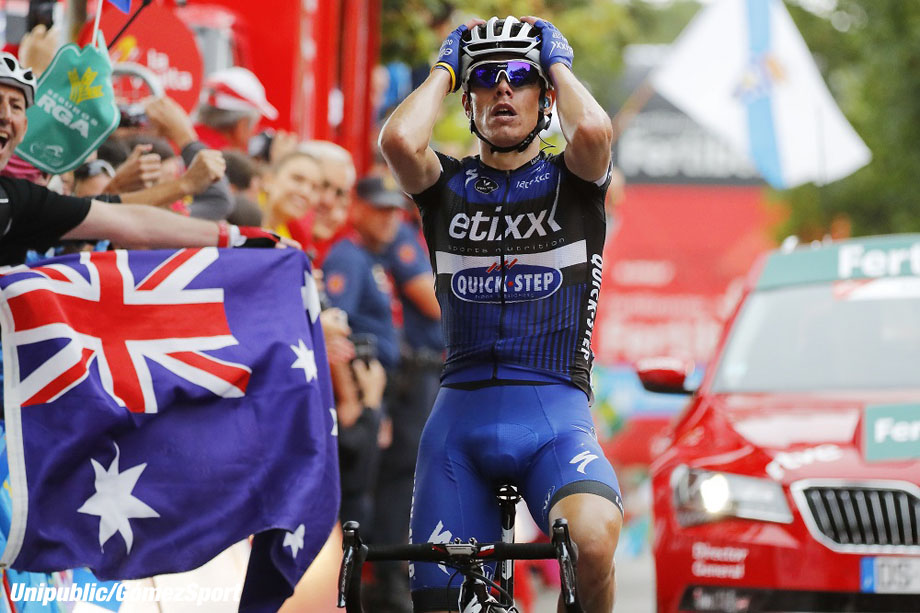 Rewriting the Script
They say that to beat your opponent you must first study their ways… and perhaps Nairo Quintana (Movistar) has been doing that by watching Chris Froome (Team Sky) closely. In the pressroom, the journalists have become used to Froome’s style of riding on the steeper slopes. As the attacks go, he often slips backwards from the group but then gathers his momentum and comes back through to the front.

Yesterday though, Quintana attacked him just as he made his way back to the front and the Tour winner was unable to respond, going seriously into the red and even being passed by an ailing Alberto Contador in the final run to the line. So, if they’ve been paying attention, the riders now know that they have to attack him before he gathers his full strength if they’re to distance him and take time. 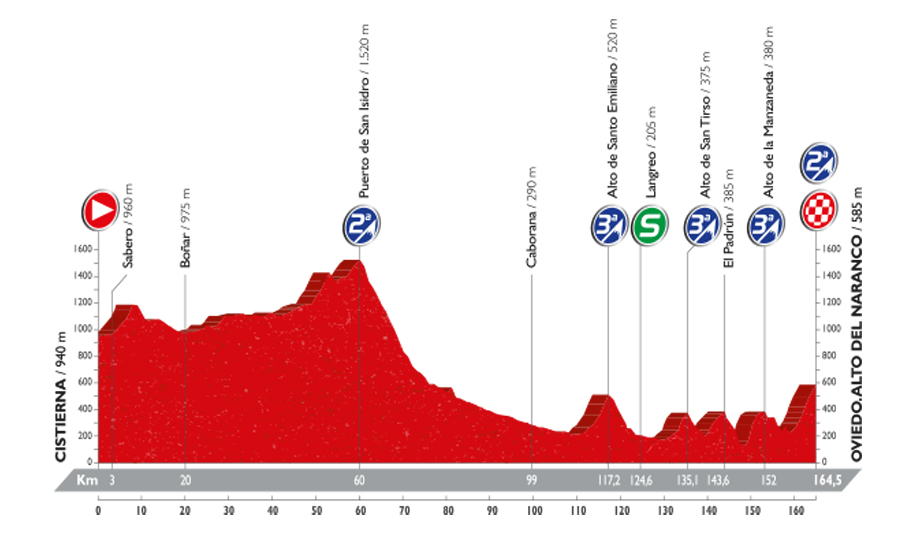 Today’s stage from Cistierna would see the race move out of Castilla and León and into Asturias to finish at the Alto del Naranco, just outside Oviedo. It was 164.5km and climbed from the moment the flag came in. Riders were heavy on the rollers before the start in order to be ready for the day ahead. With a combination of 2nd and 3rd category ascents it was never going to be an easy day especially as most of the short, sharp efforts would come in the last 45km, and the action in the last 2km.

Big Break
Right from the start, riders were trying to get away and eventually a big group of 12 formed and began to forge a lead. The two teams to miss out were Trek and Dimension Data and together they led a chase but Movistar, BMC, Sky and Tinkoff were not interested and the gap started to go out. 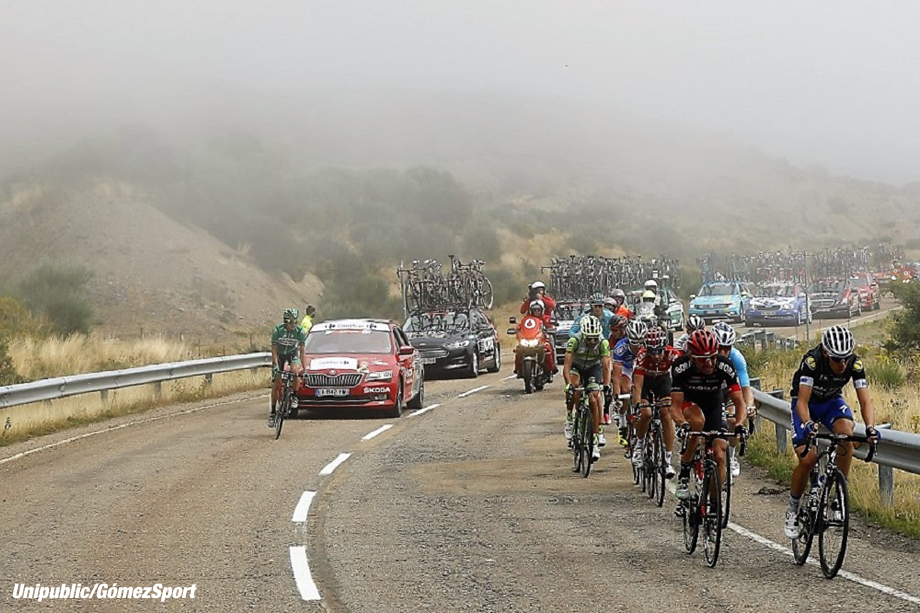 It was still early in the stage and the hometown favorite Samuel Sanchez (BMC) was predicting rain and mist as the race moved towards the coast: “It’s a special place for me, it’s my home. I use it for training a lot. For today, in my opinion, today is for a breakaway. Tomorrow is for the GC. Today, I think that the breakaway will go to the finish and for the GC, there will be a small fight in the final to take a few seconds.”

So, with the rest day fast approaching, and Covadonga tomorrow, it seemed like the GC teams might allow the break to fight it out but Movistar would keep it under control. They’ll be praying for Tuesday when they’ll try to recoup some of the energy they’ve expended this week. 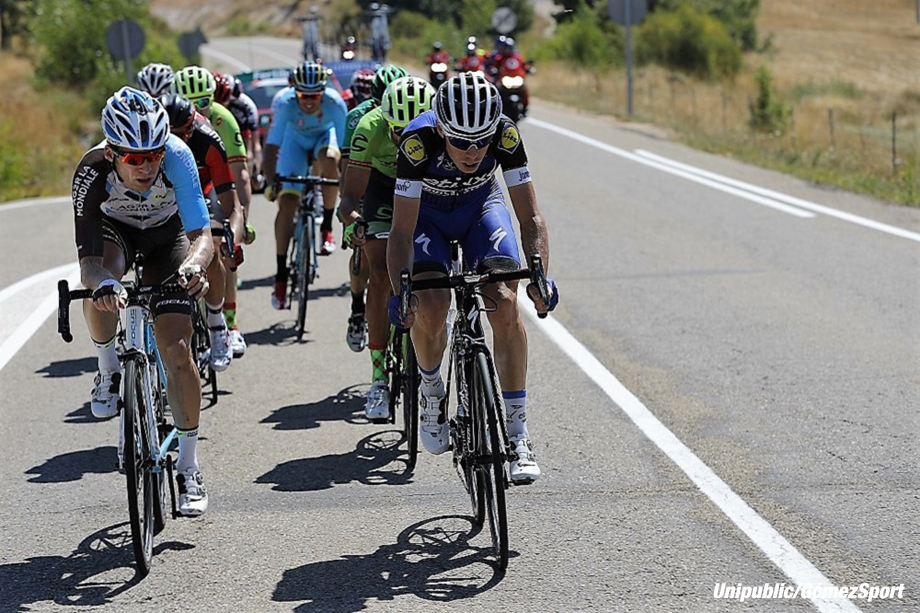 KOM
It was advantage to the breakaway then as they topped out the first summit of the Alto de San Isidro and the conditions predicted by the BMC man were all too apparent with rain and drizzle. Full marks to Thomas De Gendt from Alexandre Geniez to put them onto equal points in the climbers’ competition and with 50km of the stage done they had just under 5 minutes of a gap. Movistar, aware of De La Cruz’s position in the overall soon brought this back to 4:15.

Behind, a number of riders had called it a day, succumbing to injuries for crashes earlier in the race or from illness. Igor Anton (Dimension Data) hadn’t even made it to the start today.

Situation Normal
And not a great deal happened…with the long, gradual run down to the foot of the Alto de St. Emiliano, the only thing of note was that the gap was nudging back out towards 5 minutes once again.

Onto the climb and De Gendt was looking feisty and sure enough he jumped out of the group to take the summit and move into the lead in the KOM competition. Geniez didn’t challenge him, either because he was feeling the effect of his efforts earlier in the week or because he was playing the long game and thinking of the stage. 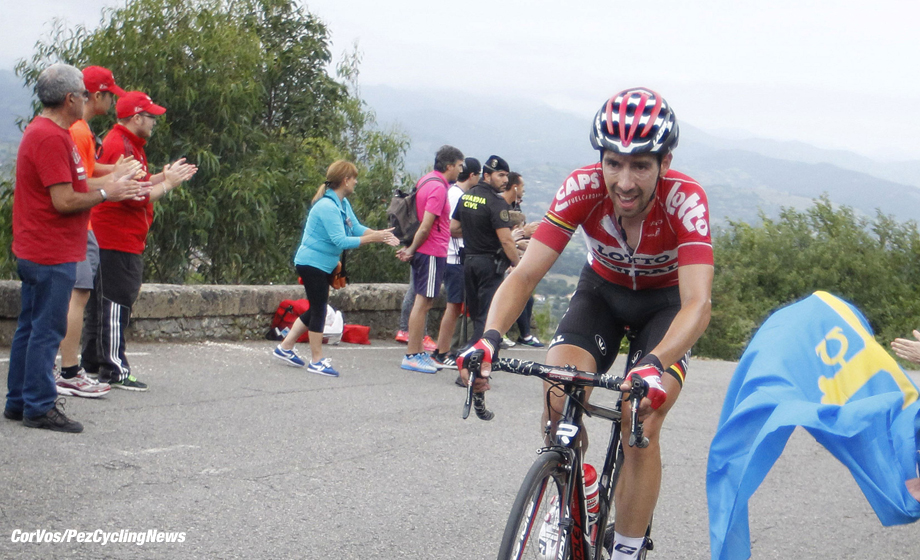 Riding to His Own Tune!
Thomas De Gendt, being Thomas De Gendt, decided not to let up and forged away on his own. He opened up a gap of 30 seconds and was soon through the sprint point and onto the next climb. But it was not to be as he eased up and the group came back to him. Maybe just too far out to go it alone and they were soon all working together to hold off the peloton.

Over the next climb, the Alto de San Tirso, and De Gendt pulled the same move pushing away on the dry descent. This time though he had Clarke and Geniez along for company and the chasers were being led by Luis Leon Sanchez, annoyed at the splits forming on the way down. All back together and De Gendt led them up yet another climb, the Padrún, and uncategorized little stinker but the effect was that Simon Clarke lost contact and slipped away.

All the while Movistar was slowly reeling them in. The gap was down to 4:19 and although the Spanish team would have been unconcerned by De La Cruz taking the jersey they were intent on keeping the deficit to a respectable amount. 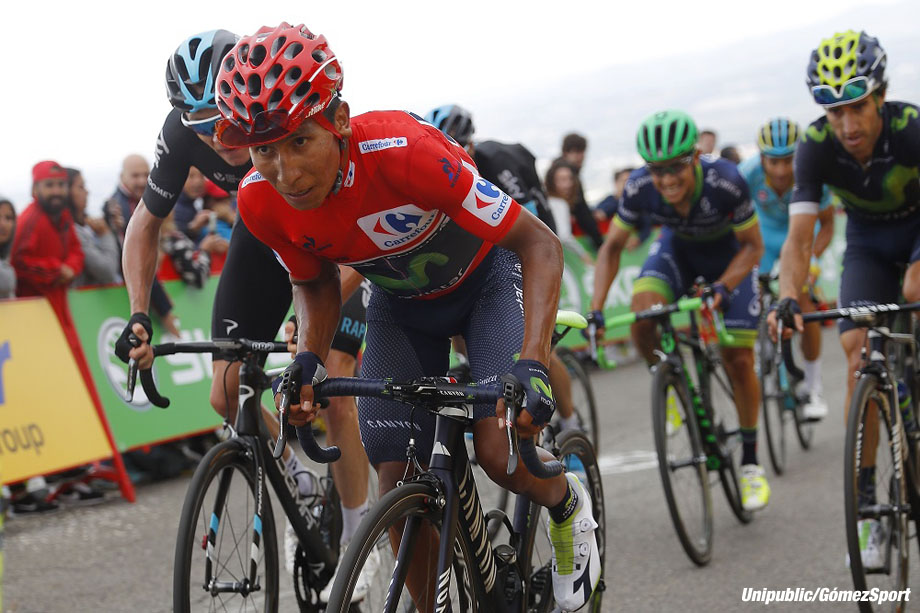 One, Two
With first Sanchez attacking and being brought back, then Frank, it was the turn of Dries Devenyns as the IAM man moved up the road followed by Bakelants. With De Gendt struggling on the descent, the pair joined up and had a gap of 20 seconds with 20km, and two climbs, still to go.

Onto the 3rd Cat Alto de la Manzaneda and the chasers were splitting up as some riders went after the lead pair and others went backwards. Teuns bridged across easily as Clarke, who had made it back to the group, went backwards again. The lead trio, all Belgians, had a slight advantage but Sanchez finally pulled the remainder of the group back into contention.

And then there were two as Devenyns moved ahead again, this time with virtual race leader De La Cruz who could see himself in red if he finished with 2:46 in hand.

Into Oviedo
Coming into the capital of the Asturias region and the two leaders had a gap of 20 seconds before turning onto the final climb. Geniez had taken maximum points of the last summit and so he and De Gendt would be fighting for the jersey up the Naranco.

It could still all blow apart as the leaders hit the rise with 5km to ride and the chasers were flying…but not quick enough as De Gendt rode off the front in pursuit of the leaders. The peloton was still over four minutes back so it was looking like a new race leader by the end of the stage.

And now it was the turn of Bilbao to ride clear of the chasers as De Gendt tried to close in on the head of the race. The man from Guernica was keen to show the sponsor’s jersey and was hoping that he could get across as time was running out. 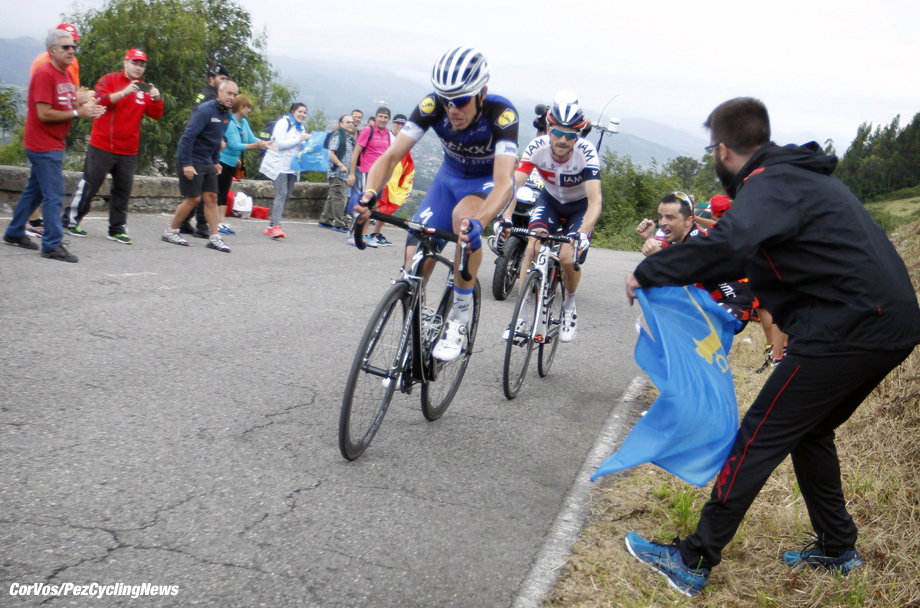 New Leader
With the chasers attacking each other, Sanchez was doing the major share but the two leaders now had a gap of 45 seconds as De Gendt and Bilbao were reeled in.

Movistar had turned up the wick and the gap back to the main race was 3:40 so it was going to be close for De La Cruz.

Onto the final, nasty, little rise and the win was going to go to either De La Cruz or Devenyns, the smart money saying that the IAM man would take it and the Etixx rider the overall.

But the smart money doesn’t always win as De La Cruz attacked and Devenyns couldn’t hold his wheel…although it would later appear that he had a mechanical issue at exactly the wrong moment.

De La Cruz soloed over the line to take Stage 9 and all eyes turned to the clock to see if the Catalonian could take the race lead. Devenyns came home for second and he was followed in by first Moser and then Sanchez, the Astana rider having spent too much energy chasing others down to contest the win.

In the peloton, Kennaugh (Team Sky) had made a move off the front but Movistar had the race flying. Into the final 2km and Samual Sanchez made his move only to be passed by Brambilla (Etixx – Quick-Step) and to come home with Valverde (Movistar). There were small gaps between the GC riders but the organizers confirmed that David De La Cruz was in red by 22 seconds over Quintana. 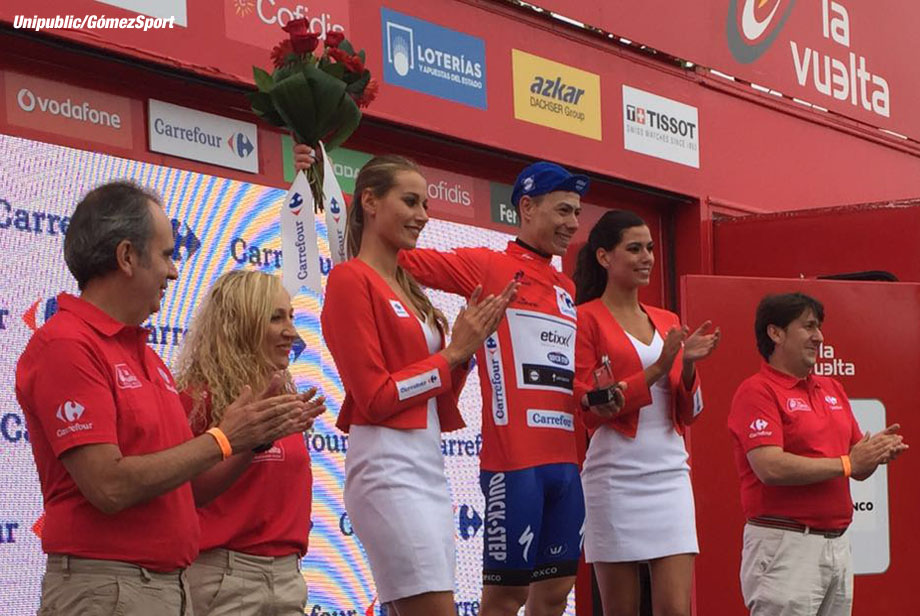 Keep it PEZ for the Covadonga tomorrow!