Race Report: Gianluca Brambilla started stage 15 with an attack and finished it with a stage victory. In between he was part of a decisive breakaway which featured race leader Nairo Quintana and GC contender Alberto Contador. It was one of the best stages of the year.

The Queen stage had delivered everything cycling fans had asked for, but the cycling Gods weren’t done yet. This was meant to be an easier stage but a Brambilla attack caused a Contador counter attack and soon fourteen riders were clear with an isolated Froome left behind. Almost the entire Sky team had been caught out, as had Esteban Chaves and his team. The elastic kept the break within the two minute mark for much of the stage but on the final climb Castroviejo poured everything into extending Quintana’s lead. When the Colombian was finally left alone he took up the pace making duties and distanced everyone apart from Brambilla. It was a sensational stage, one which shows exactly why fans love these punchy stages. Froome remains in second but he now sits more than three minutes behind a flying Quintana. 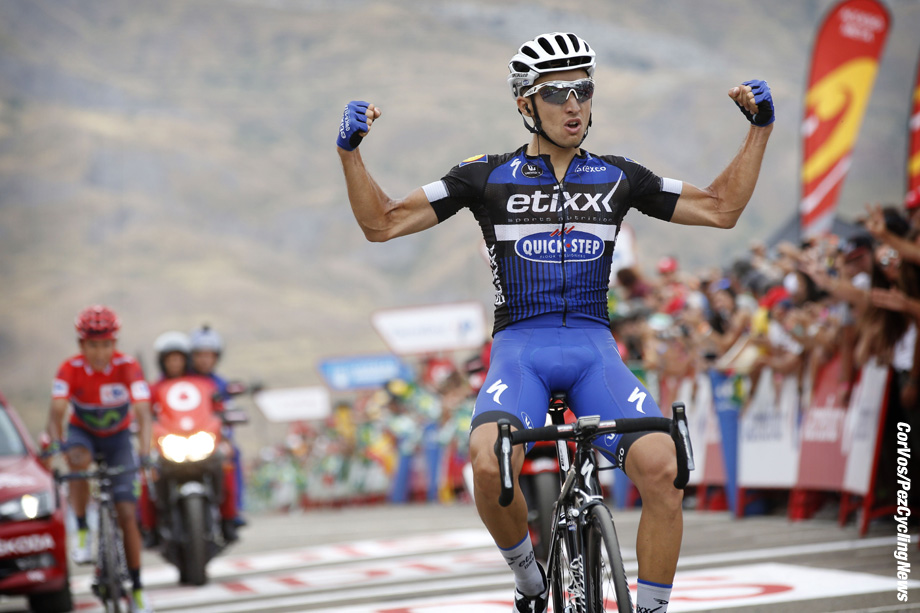 Route
After Saturday’s Queen stage, things don’t get any easier for the Vuelta peloton. They face just 118.5km of riding but there’s three climbs and 2,650m of climbing packed into that distance. The difficulty of the stage ramps up as it progresses, starting with the 3rd category Alto de Petralba (6.3km at 5%) then the Alto de Cotefablo (12.5km at 4.3%) and finishing at the top of the Aramon Formigal (14.5km at 4.6%). None of the climbs appear that difficult on paper but they all set off from above 800m and will punish the riders with 14 stages already in their legs. The Aramon Formigal rises in steps from the Escarilla with the steepest ramp, 10%, coming in the first 4km. From there the climb is gradual all the way up to the final 3km where it gradually gets steeper to deliver the riders to the 1,790m summit. After Orica-BikeExchange blew the race apart on the road to the Aubisque there’s now more teams who can smell blood in the water and this is the perfect stage to exploit it. 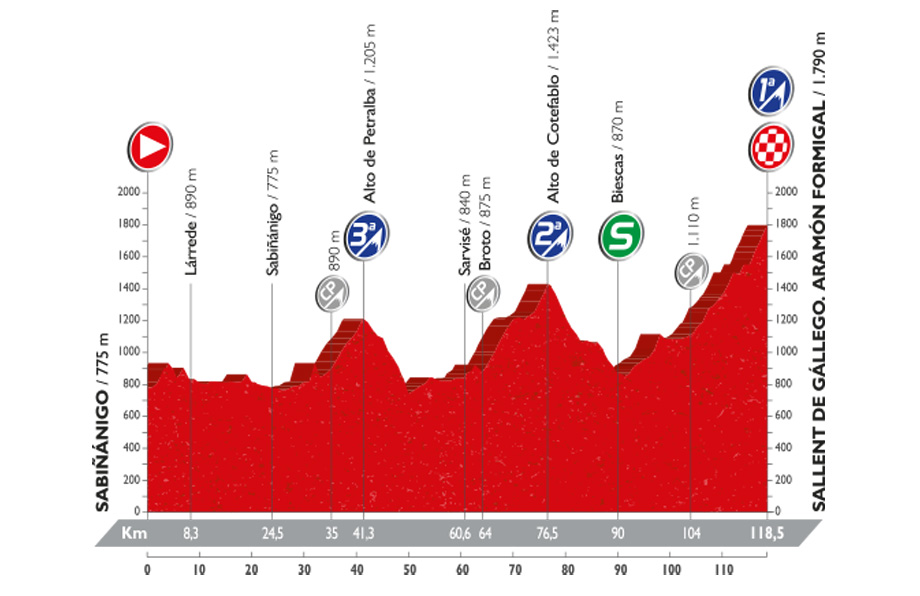 Big Break
Gianluca Brambilla (Etixx – Quick-Step) was the first to attack as the flag dropped but his attack drew out Alberto Contador (Tinkoff). The Spaniard was determined to claw his way back into the GC battle and he had escaped the shackles of Froome. He hadn’t however been able to get away from Quintana who had made it into his advanced party leaving Froome (Sky) and Esteban Chaves (Orica-BikeExchange) to chase behind.
With 90km left to ride the domestiques for Contador and Quintana were fully committed and the gap was continuing to grow. Behind, Sky had been caught out and were significantly underpowered compared to the group they were hunting. 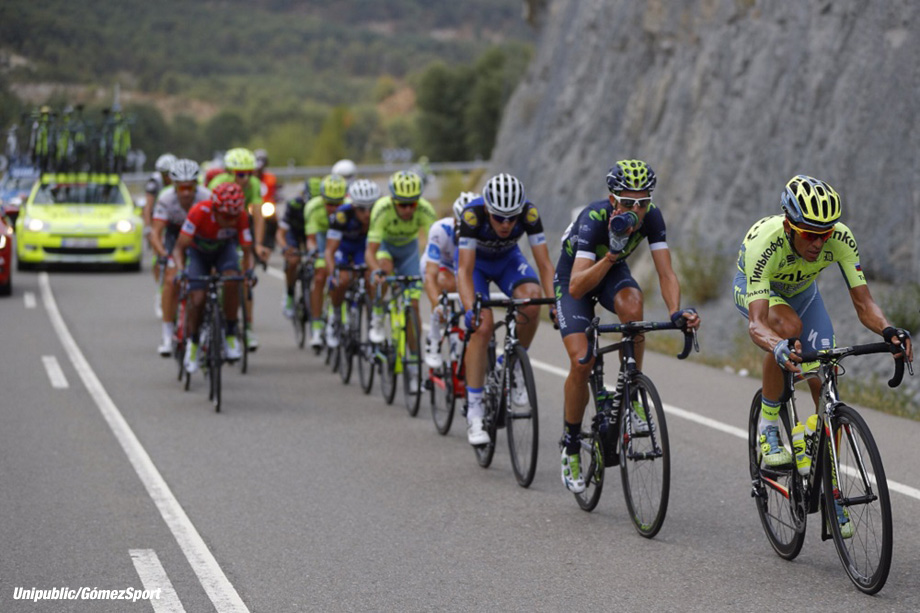 As they hit the top of the first climb the gap had climbed to two minutes. It was looking good for Quintana but he only had two teammates along with Contador.

There was a brief lull in the action as the king of the mountains contenders fought for the points. Omar Fraile (Dimension Data) beat Kenny Elissonde (FDJ) at the summit of the first climb to move the Spaniard closer to the Frenchman in the battle for the polka dots.

The lull was short lived however and there was soon more bad news for Froome as the third group, containing most of his team, sat up and let the race go away from them. The tube was cut and the Tour de France champion was now by himself with 80km still left to ride.

Froome in Danger
After watching the Tour it was impossible to imagine Froome getting caught out like this. He was continuing to fall backwards and the time gap was now nudging three minutes. The front group, consisting of; Jonathan Castroviejo, Ruben Fernandez and Nairo Quintana (Movistar), Alberto Contador, Ivan Rovny and Yuri Trofimov (Tinkoff), Kenny Elissonde (FDJ), Fabio Felline (Trek-Segafredo), Matvey Mamykin (Katusha), Gianluca Brambilla and David de la Cruz (Etixx – Quick-Step), Davide Formolo and Moreno Moser (Cannondale-Drapac) and Omar Fraile (Dimension Data). At the summit of the second climb, Fraille once again out-duked Elissonde for maximum points but the big news was that after constantly losing time since the flag dropped, the Froome group was finally starting to come back. They had closed to within two minutes, still a significant margin but not quite the calamity that it had looked like being 60km before.

The joy was short lived though as the gap once again pulled out beyond the two minute mark as the lead group crept onto the final climb. Quintana was one helper down though as Ruben Fernandez, who had done so much work to establish the lead, fell away. 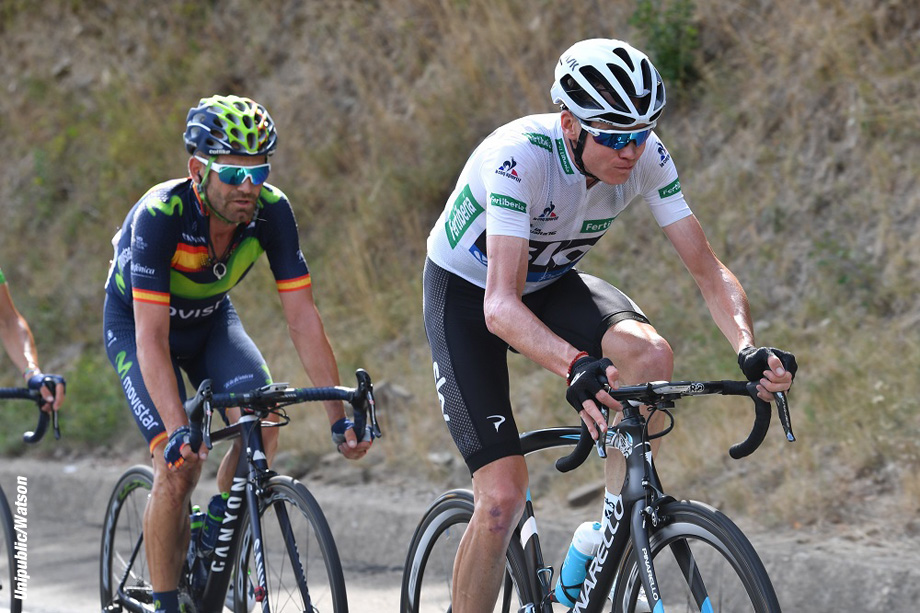 Froome was now completely isolated and leaning heavily on the pace setting work of the Astana team who were trying to hold onto Michele Scarponi’s top ten position. With 20km left to ride Froome was in second wheel with nothing but the massed ranks of Movistar behind him, acting as an anchor for their Colombian team leader. Moreno Moser was the next to drop off the red jersey group as Castroviejo drove a serious pace to maintain the two minute lead on Froome.

Formigal
It was the battle of the Spanish time trailers as Luis Leon Sanchez (Astana) led the Froome group against Castroviejo, who was keeping his hand in the fire for his team leader. Sanchez was winning though and the gap dropped once again below the two minute mark. Castroviejo had ridden himself to a standstill and he went pop with 8km left to ride along with, fellow domestique, Ivan Rovny. Quintana was now all alone and doing all the work on the front of the group.

Froome was cutting a lonely figure as he sat on the front of the chasing group with Valverde easily sitting on his tail. The gap was still going out though and the Brit was receiving no help from anyone around him and Quintana, along with his Vuelta chances, was disappearing up the road. 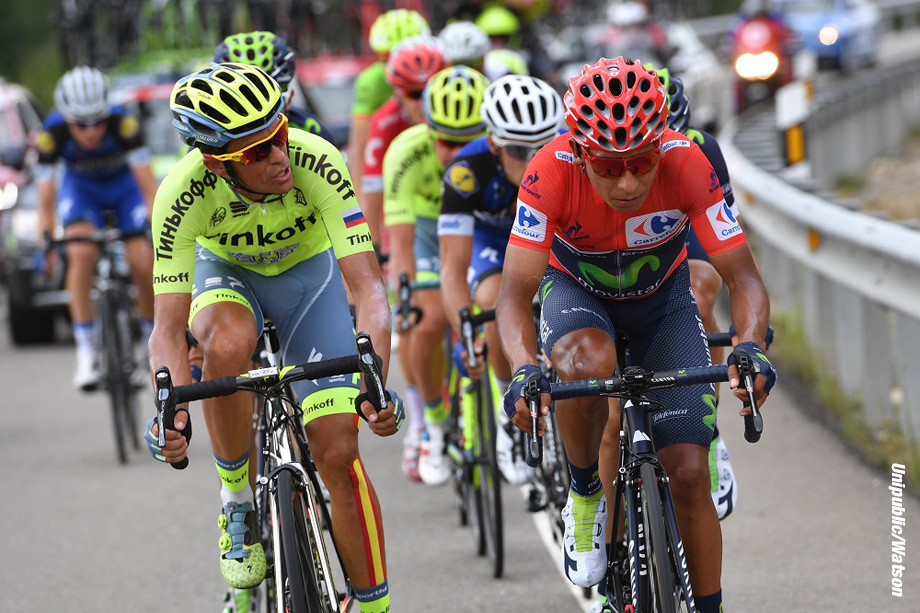 With 5km still to ride Quintana was still doing all the work as they began the final step of the climb. Behind him Valverde was playing the perfect teammate as he attacked and then slowed as soon as Froome moved away from the front of the bunch. The wily Spaniard was playing with the Tour de France champion and Froome was beginning to go backwards in the group as the pace increased once again.

Quintana’s pace was designed to further distance Froome but he had now distanced everyone in the break apart from Contador and Brambilla. Behind; Froome continued to stare at his power meter, searching for higher numbers, but none were coming and he was getting dropped from the second group on the road. 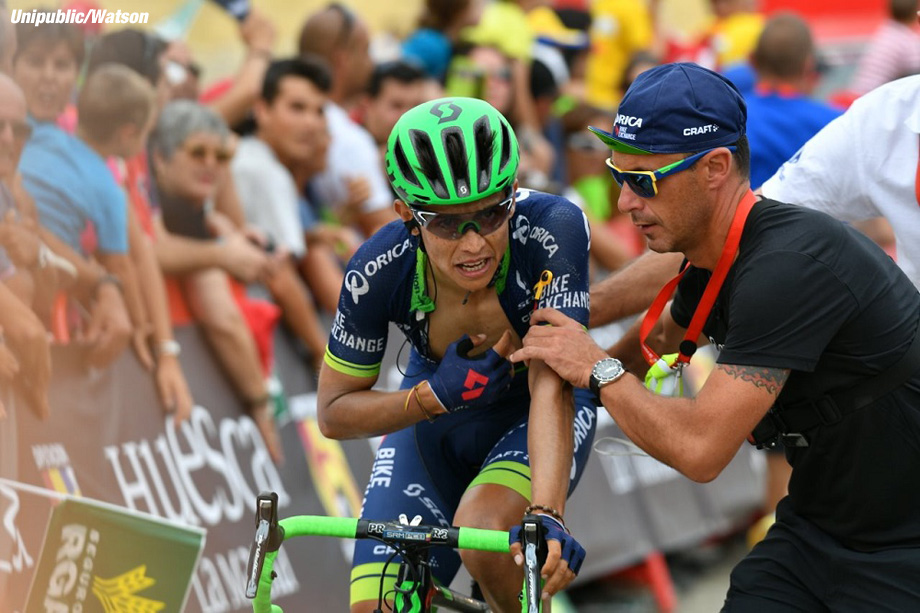 Quintana had given up searching for any assistance and he kept driving as they entered the final 2km of the stage. Quintana went again and this time only Brambilla could follow! Contador was losing time.

Contador was disappearing from view and Quintana had distanced all his rivals. The Spaniard was passed by a resurgent Elissonde and Felline as Quintana drove into the final 1km. Brambilla had started the move that turned the Vuelta on its head and it finished it off, picking Quintana’s pocket inside the final 100m. The Colombian kept driving to the line and he crossed with a punch of the air. Felline crossed in third and Contador was towed home by David Da la Cruz for a minor placing. In all the confusion Esteban Chaves had managed to forge clear of the Froome group and he came home 1:55 behind his countryman. It was a full 45 seconds later before Froome appeared to cross the line. His Vuelta left on its knees thanks to an immaculate ride by Tinkoff and Movistar.

Stay PEZ for the final week of action and catch up in EUROTRASH Monday.

Wanty-Groupe Gobert to the Tour of Britain