By Alastair Hamilton On Sep 8, 2017
Share
Like PEZ? Why not subscribe to our weekly newsletter to receive updates and reminders on what's cool in road cycling?

Stage Report: The break of the day went all the way to the finish line in Gijón where the escape specialist Thomas De Gendt gave his Lotto Soudal team its fourth Vuelta’17 stage win and the second in two days. Sky brought the peloton in for no change in the overall heading towards the big finalé of the Angliru. 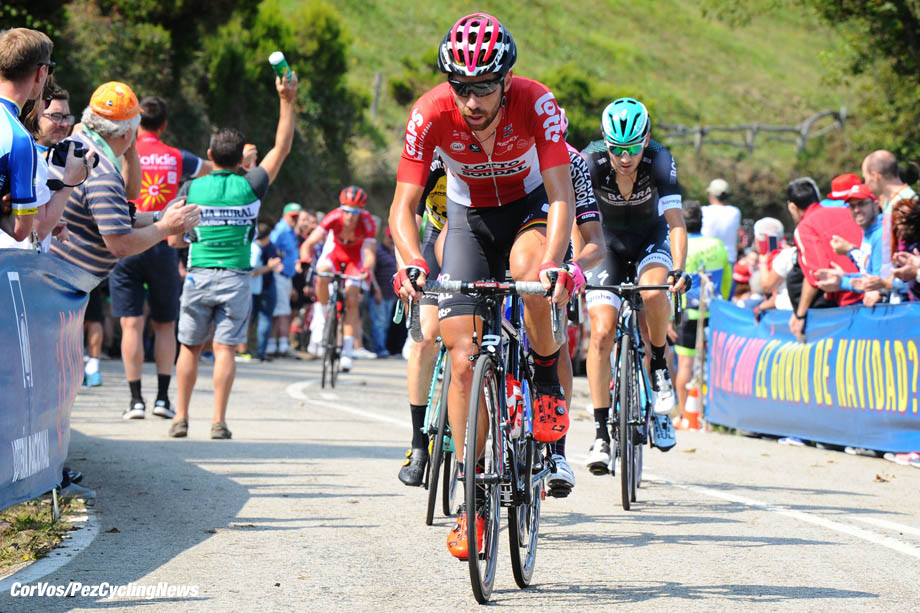 Thomas De Gendt was part of a very select group of escapees including Rui Costa, Nico Roche, Warren Bardet, Bob Jungels and Dani Navarro. The break was allowed over 17 minutes at one point, which was no problem to Chris Froome, but with Nico Roche at 27:09, Astana did work to bring the gap a little closer as Roche could have moved above Fabio Aru. Bahrain-Merida’s Ivan Garcia went solo from the group, but was caught by Bardet and then Roche and Costa and the stage looked to be between those four, but the others caught them on the streets of Gijón for De Gendt to win the sprint from Pantano. De Gendt’s win gave him a stage win in each of the Grand Tours. 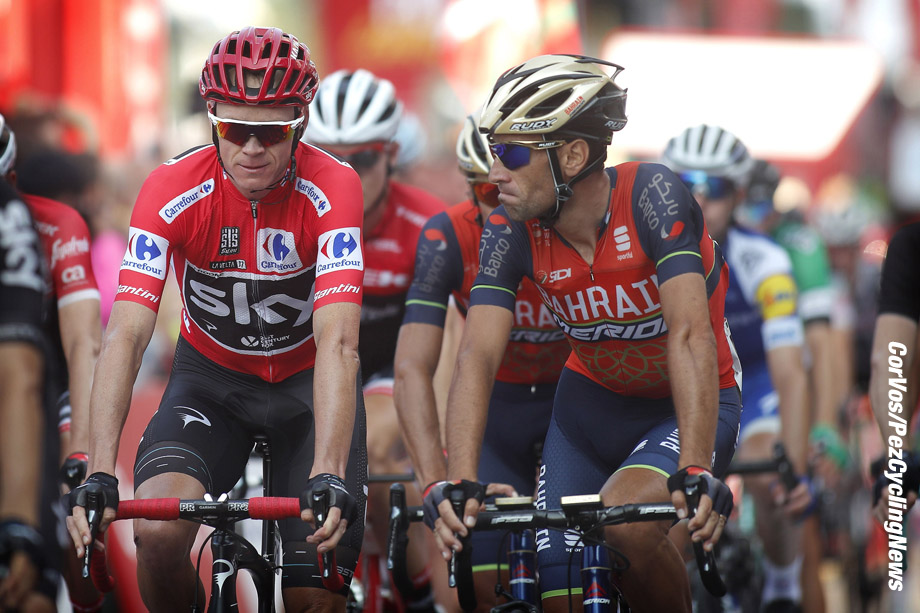 All the top GC men finished together

Alberto Contador made another strong attack, going away on the last climb, dropping Inur Zakarin. His effort came to nothing as he was caught before the finish for the overall top ten to stay the same going into the final day of battle on the Angliru on Saturday. 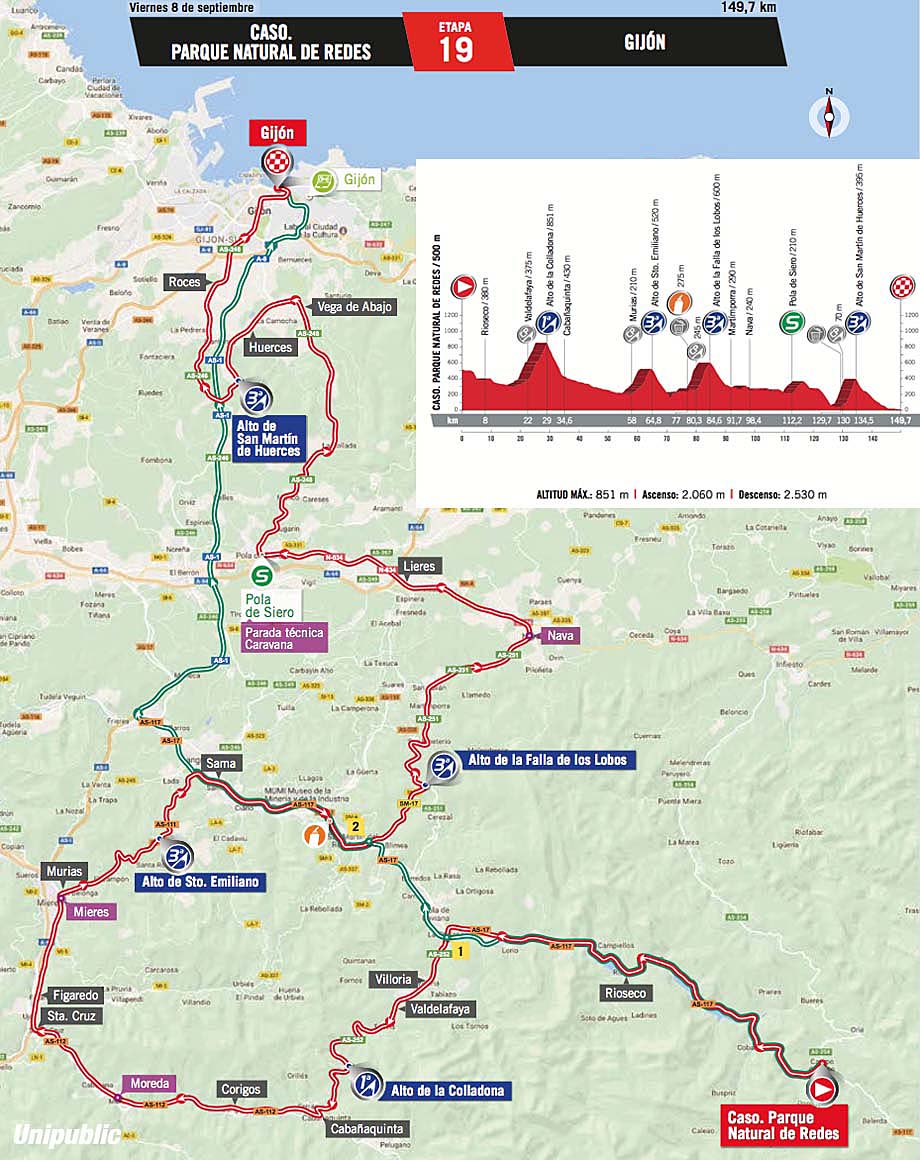 The course was made for a break-away with no flat roads, but also no monster climbs on the 149.7 kilometers from Caso to Gijón. Four catagorized climbs finishing with the San Martín pass 16.6 kilometers from the finish-line. 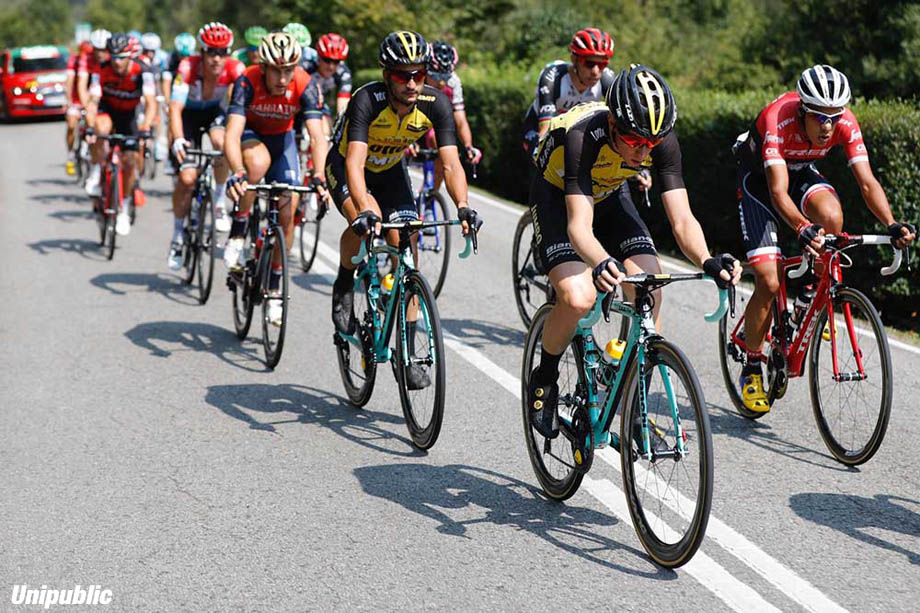 The attacks started from KM 0 on stage 19 from Caso Parque Natural de Redes, and it wasn’t long before the ‘break of the day’ formed. Edward Theuns (Trek-Segafredo), Juanjo Lobato (LottoNL-Jumbo) and Laurens De Vreese (Astana) were first to attack and were joined by 16 other riders, including the KOM, Davide Villella (Cannondale-Drapac), and the points leader, Matteo Trentin (Quick-Step Floors). The first climb of the day saw a counter-attack from the peloton go after them with Romain Bardet (AG2R-La Mondiale). After 60km, 27 riders were together. 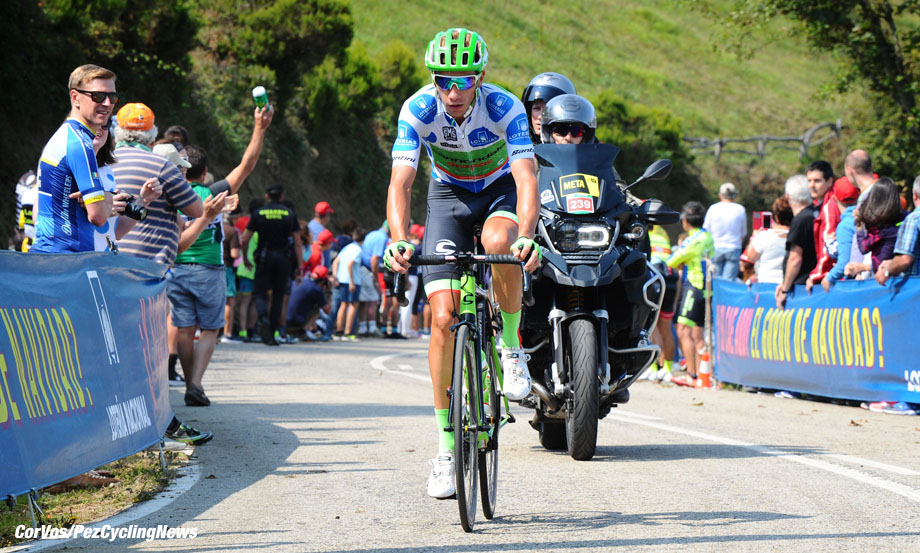 Another KOM day for Davide Villella

The peloton were happy to let them go and the gap went up to 17:40 after 120km. Astana, leader of the team classification, decided to up the speed as, up front, attacks were tearing the breakaway apart. With 33 kilometers to go, local rider, Ivan Garcia went for a solo and built up a one minute lead before San Martín, the last climb of the day. Behind him the break split due to an attack from Roche, he was passed by Roman Bardet who caught Garcia just after the summit with 15km to go. 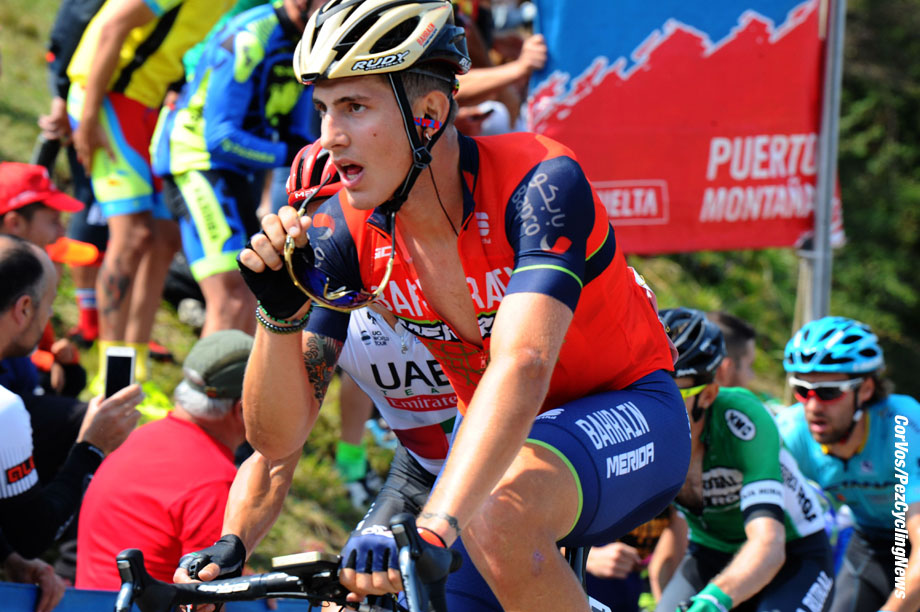 Ivan Garcia went solo from the break, but…

On the descent; Roche and Rui Costa caught the pair out front and the stage looked to be a sprint between these four, but the remainder of the break caught them in the finalé. Pantano, De Tier, Jungels, Navarro and De Gendt were amongst them. Roche led out, but the others swamped the BMC man with De Gendt giving it all he had for the win. 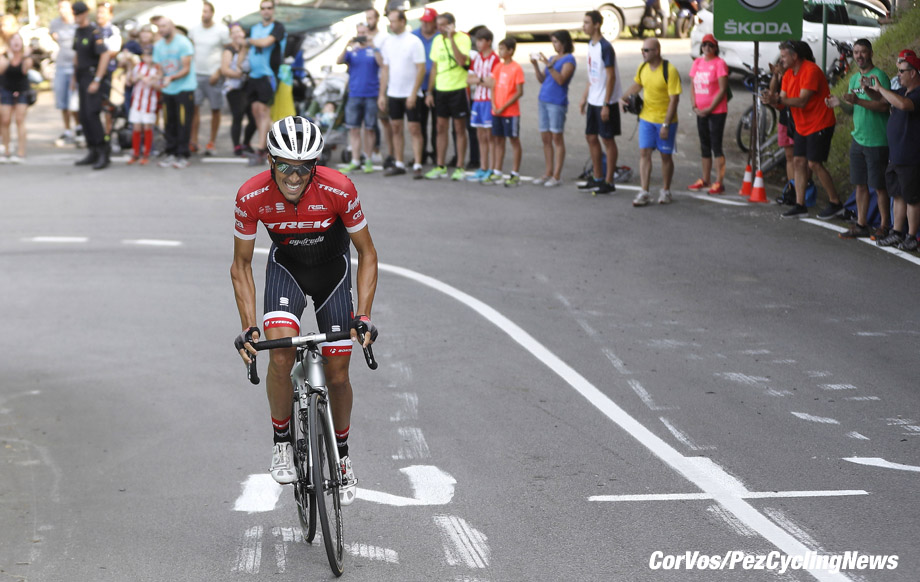 ‘Berty’ on the attack again

Alberto Contador (Trek-Segafredo) made his move on the final climb with Inur Zakarin (Katusha-Alpecin) on his wheel. The Spaniard needs 1:05 to overtake the Russian on the overall and a further 13 seconds to pass Wilco Kelderman (Sunweb) for a place on the podium. Zakarin couldn’t hold Contador’s wheel and Chris Froome’s Sky team controlled the move and even with help from teammate Edward Theuns, who dropped back from the break, he was caught 2.5 kilometers from home. So no change in the overall before the big showdown on the Angliru. 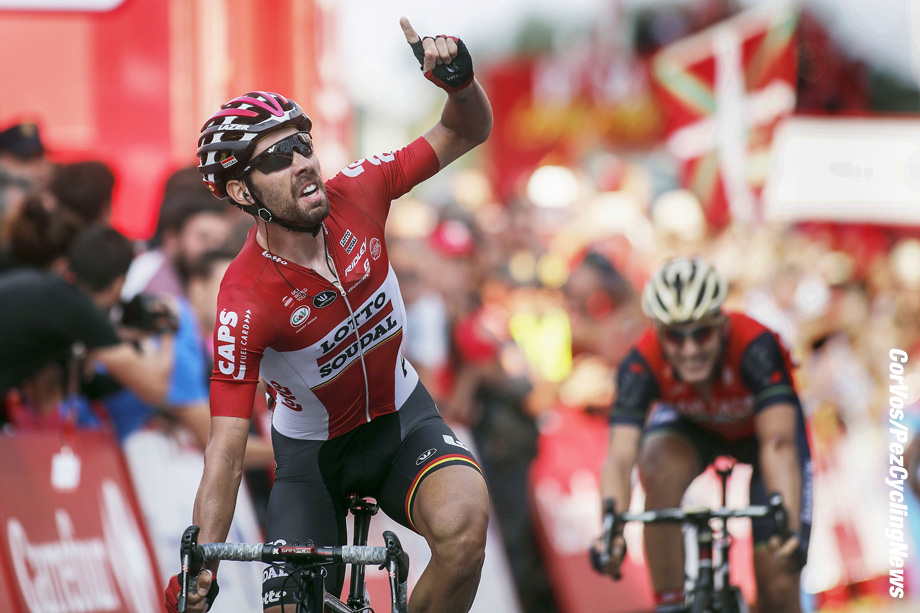 Stage winner, Thomas De Gendt (Lotto Soudal): “I was at the front when we started. Before the race, we thought that a big group would probably go with the KOM jersey and the Green jersey. Those two guys, (Matteo) Trentin and (Davide) Villella, started attacking. I know I’m not slow in the sprints… So I was in a perfect position. I had to do the sprint of my life, just go full until the finish. I’m really happy that I can finish it off with a finish. I didn’t expect it (winning at La Vuelta after victories on the Tour de France and the Giro d’Italia) to be this year. I wasn’t feeling well in the first week. The second week was okay. I was doing better in the third week but it wasn’t really my type of routes… The final climb was too steep for me but we had a good group with Bob Jungels and we pulled very hard to get back. It was perfect for me. I didn’t expect it very much but I like surprises.” 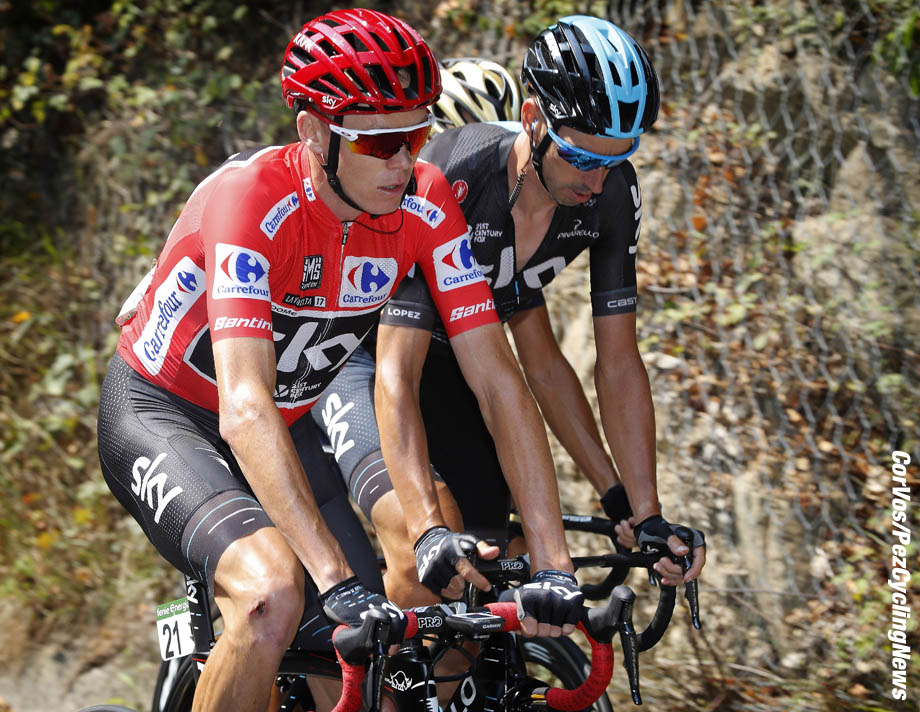 Chris Froome had nothing to worry about on stage 19

Overall leader, Chris Froome (Sky): “Contador certainly can’t be blamed for the lack of trying. In every stage, he’s been attacking and today was exactly the same. For me, it was about trying to save as much energy as possible for tomorrow and get through the day without much issues, so I’m happy to let the day behind us and focus on tomorrow. Angliru is going to be rude, but it’s an explosive and short stage, so we can expect fireworks from the start. There’s some though climbs before the Angliru. Everybody is tired at this point of the race, but I feel good.”