Stage Report: Alberto Contador scored a fabulous victory at the summit of the mythical Alto de l’Angliru to end his career on a high note, while Sky’s Christopher Froome preserved the red jersey in the fog of the Asturian mountains. Russia’s Ilnur Zakarin made it onto the podium after dropping his Dutch rival Wilco Kelderman in the final kilometers of the ascent. 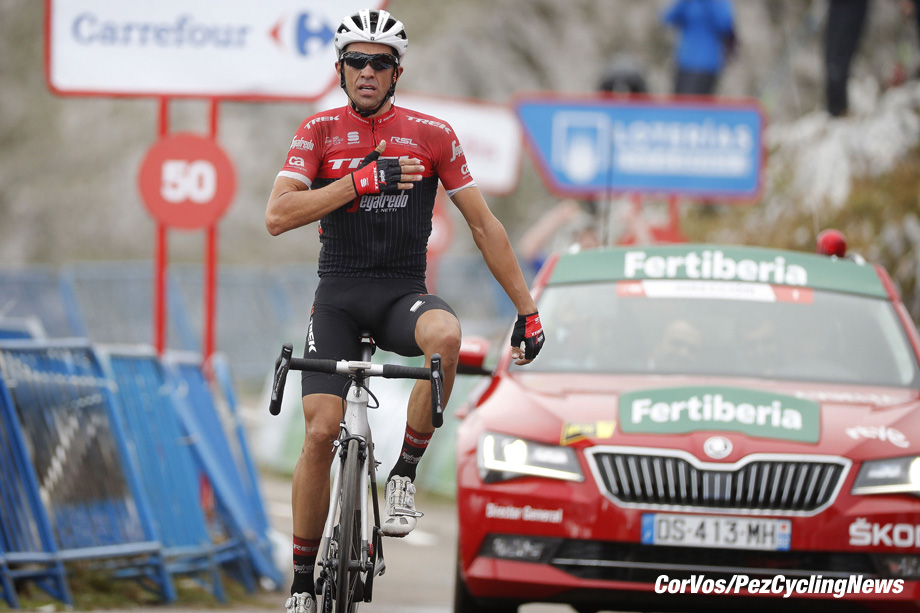 With all due respect to the Alto de la Cobertoria and the Alto del Cordal, Stage 20 of the 2017 Vuelta a España―at 117.5 kilometers in length the shortest in this year’s race, with the exception of the time trials―was all about one thing: the ascent of the Alto de l’Angliru, the monster of Asturias and one of the world’s most terrifyingly difficult climbs to boot. Though the Cobertoria and Cordal―both tough first category ascents in their own right―are by no means for the jelly-legged, their bigger brother belongs to an altogether different league. ‘Atrocious beyond conception’, ‘a capital punishment of a climb’, ‘a vertical road to nowhere’, ‘an experience to make Golgotha look like a picnic’ are a few of the phrases that have been used to describe the awful Alto. It has been said that the death notices section of the local paper, the Oviedo-based La Voz de Asturias, makes for more cheerful reading than the statistics of this climb from Hell. No mountain pass in history, perhaps, has featured in more cyclists’ nightmares than the Angliru. 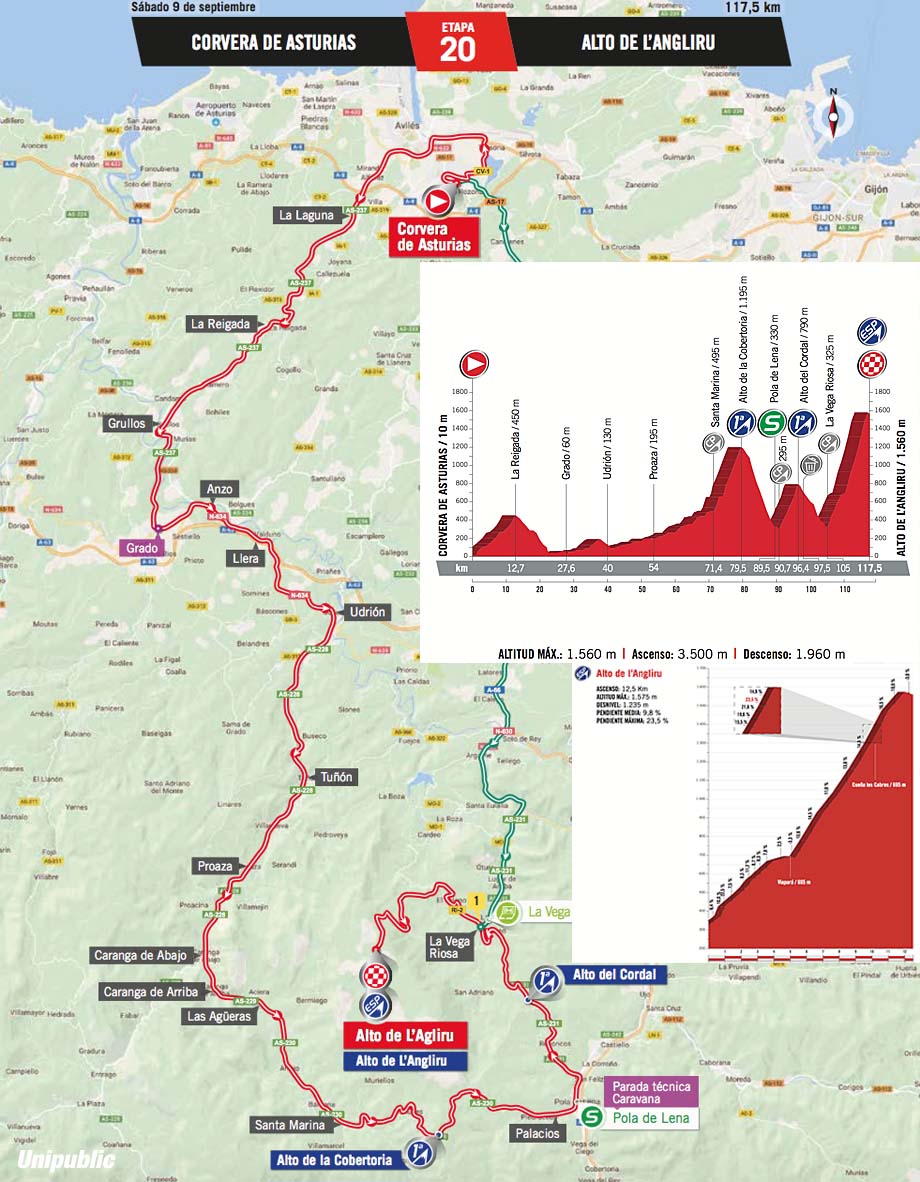 Unsurprisingly, the sadistic organizers of the Vuelta have included it in their race on several occasions, sealing its iconic status. From the ill-fated José María Jiménez’s ‘suicide strike’ in 1999, the young Alberto Contador’s triumphant all-out assault on the mountain in 2008, and Juan José Cobo’s lightning-strikes-once bombshell of an attack in 2011, which left Britain’s Bradley Wiggins and Christopher Froome out in the cold, to Chris Horner’s shark-chastening ride for the ages in 2013, the ascent of the Angliru has over the years provided the stage for a few of the Spanish Grand Tour’s most memorable moments.

This time, the summit finish looked certain to determine the final wearer of ‘el Maillot Rojo’, coming just hours before the race’s flat epilogue, a traditional parade into Madrid. In the General Classification, Sky’s Christopher Froome began with a lead of 1 minute 37 seconds over his closest rival, second-placed Vincenzo Nibali of Italy, a slender advantage to take into such a stage. The Briton, a four-time winner of the Tour de France, hoped to finally bag a race that has consistently eluded him despite repeated efforts to ride into the Spanish capital in red. Tying the knot with this capricious Iberian bride would allow the Sky leader to put the fiasco of Formigal in 2016 firmly behind him and secure his place in the inner chamber of cycling’s Pantheon. But for that he would need to keep ‘the Shark’ at bay… 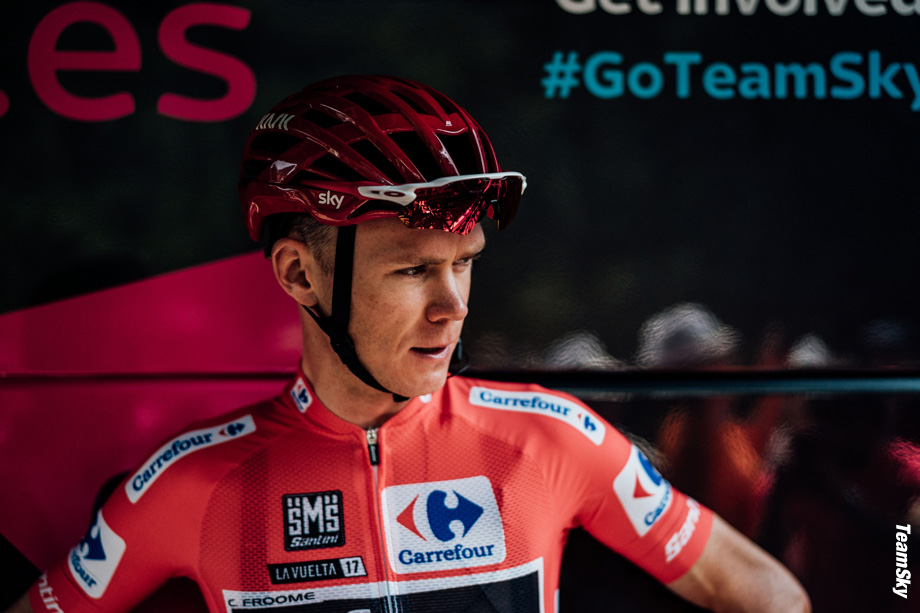 Froome was confident at the start

A number of intriguing side plots also promised to unfold, whether the battle for third place between the flourishing Dutchman Wilco Kelderman and perennial contender Ilnur Zakarin of Russia; Alberto Contador’s quest for a glorious career finale; the Spanish riders’ collective attempt to register a first stage victory in their home Grand Tour; or the as yet unresolved tussle for the distinctive jerseys.

Denifl Defies the Drizzle
The stage began under the rain, as the riders, wrapped up against the cold weather conditions, rolled out of the small town of Corvera de Asturias, tucked behind the race director’s red car. The heat and sunshine of Gijón, the city where summer lasts all year round, must have seemed but a distant memory. At the drop of the flag, a series of anonymous attackers, rendered unrecognizable by the fog and the drizzle, took a turn at the ‘cabeza de carrera’. The hostilities continued over several kilometers, as the race left town and meandered through the damp forests of Asturias, until a group of eighteen pulled clear at the initiative of Austria’s Stefan Denifl (Aqua Blue Sport) and created a gap exceeding a minute. 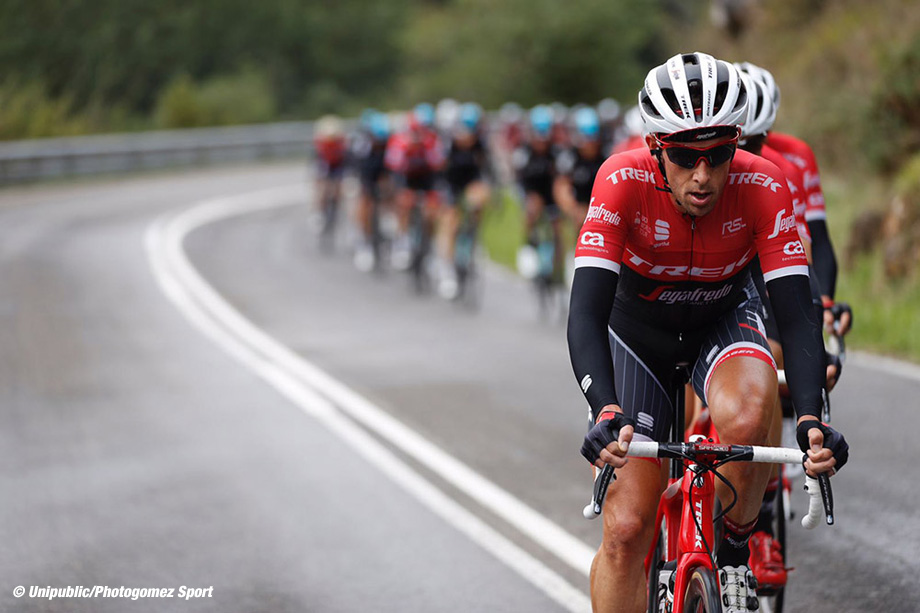 Trek-Segafredo took control from the start of the stage

However, Contador’s red and black Trek troops took place at the front of the peloton and chased them down, revealing the illustrious Spaniard’s intention to win the day’s race and bow out of cycling with a parting victory. As a result, the escapees were kept within arm’s reach throughout the stage. One could almost hear Froome, Nibali and the Colombian sensation Miguel Angel Lopez, in the turquoise of Astana, rubbing their hands with glee.

The Shark’s Fin
The rain receded as ‘los corredores’ approached the foot of the Alto de la Cobertoria, the day’s first climb, though not for long. The Katusha and Bora formations―riding respectively for Zakarin and Poland’s Rafal Majka, third of the 2015 edition of the Vuelta and a former King of the Mountains on the roads of the Tour―joined forces with Trek at the head of the pack to further reduce the break-away group’s chances of success, while Froome’s Sky superteam rested in its rivals’ slipstream, only occasionally sending its German rouleur Christian Knees to face the wind. 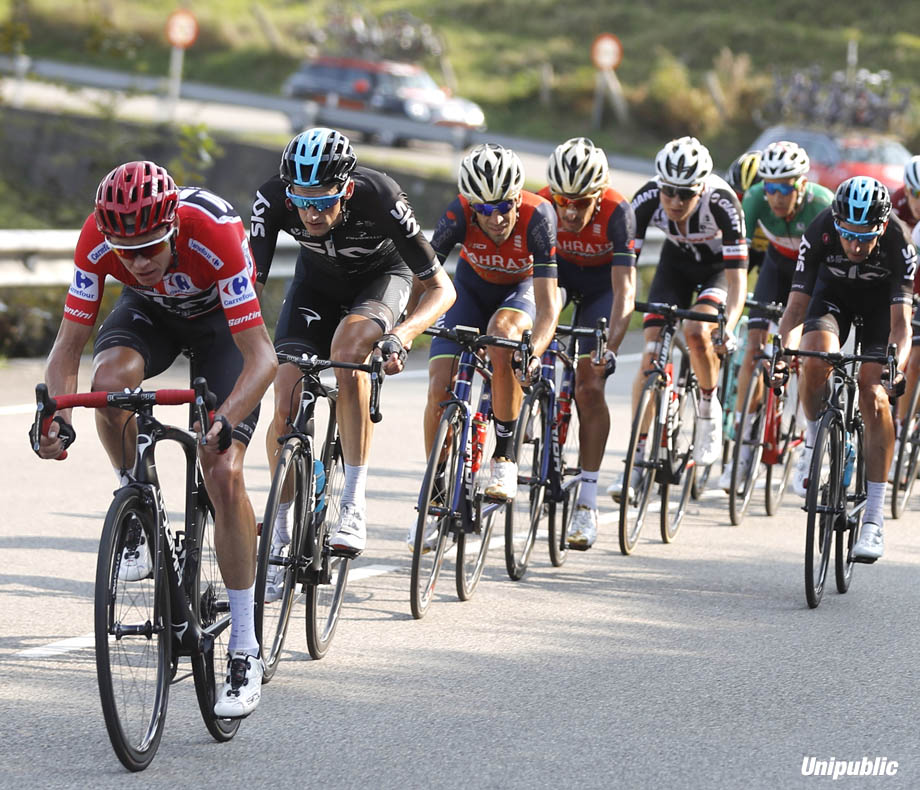 On the slopes of the Cobertoria, Spain’s Enric Mas (Quick-Step Floors) attacked repeatedly, splintering the lead group, while farther behind Nibali’s red guard took control of the peloton, imposing a harsh pace on the rest of the field as ‘the Shark of the Straights’ began to show the tip of his fin. On the descent, the Sicilian―a winner of all three of cycling’s Grand Tours―even tried to break away but Froome’s vigilant domestiques rapidly reeled him in.

As it made for the summit of the stage’s second major obstacle, the Alto del Cordal, the peloton―spearheaded by Trek’s Jarlinson Pantano―began catching exhausted members of the early escape, absorbing a roasted Roche and a poached Polanc. At the back, struggling riders found themselves defenestrated. In a fracas of shattered glass and tumbling bodies, Spain’s David De la Cruz, Italy’s Fabio Aru and Zakarin all found themselves dropped from the ‘grupo del líder’, though not irremediably. In the lead, under a rare spell of sunshine, an elite septet formed, composed of Bardet, Marczynski, Mas, Soler, Denmark’s Søren Kragh Andersen (Sunweb), and the two Yates brothers.

The wet and winding descent proved perilous, as Soler crashed at the front, soon imitated by Nibali at the back, though neither sustained serious injuries. 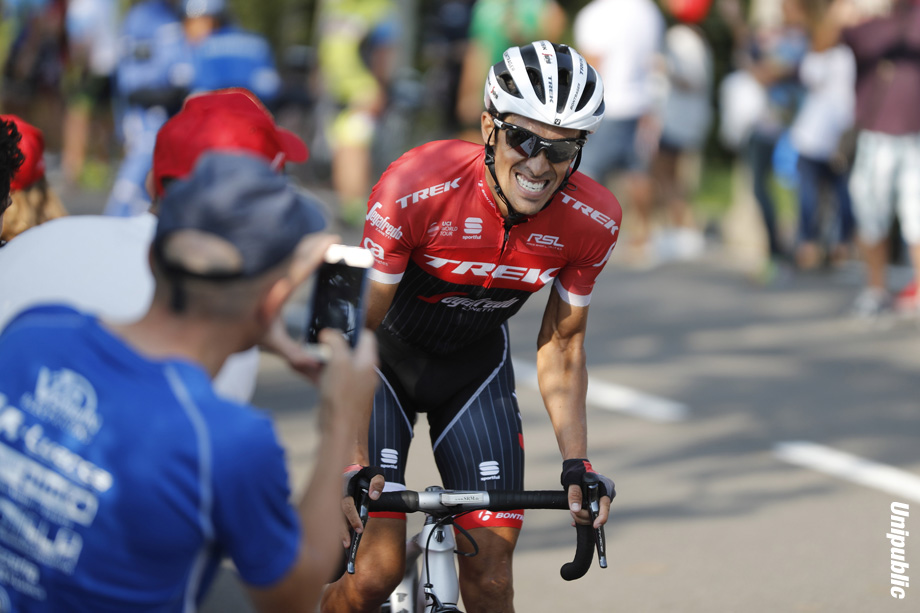 Contador had no choice – Today was the day

Contador’s Last Stand
As the leaders entered the opening portion of the fabled Angliru, their advantage had melted away and they soon found themselves caught by Contador, who cannonballed out of the peloton as if answering the call of the sirens. The celebrated Spaniard received copious encouragements from the spectators lining the narrow mountain road, deafening cries of “Vamos!” and “Venga!” greeting his every pedal stroke. The burly black sentinels of the Guardia Civil struggled to contain the crowds as the idol of an entire country flew past, battling against the climb’s impossible gradients with the panache that made him famous.

Fearful of losing his third place in the overall rankings, Kelderman ordered his team-mates in the black and white of Sunweb to chase the legend down but Team Sky soon took over and began eating into Contador’s lead, assisted by Bahrain-Merida. 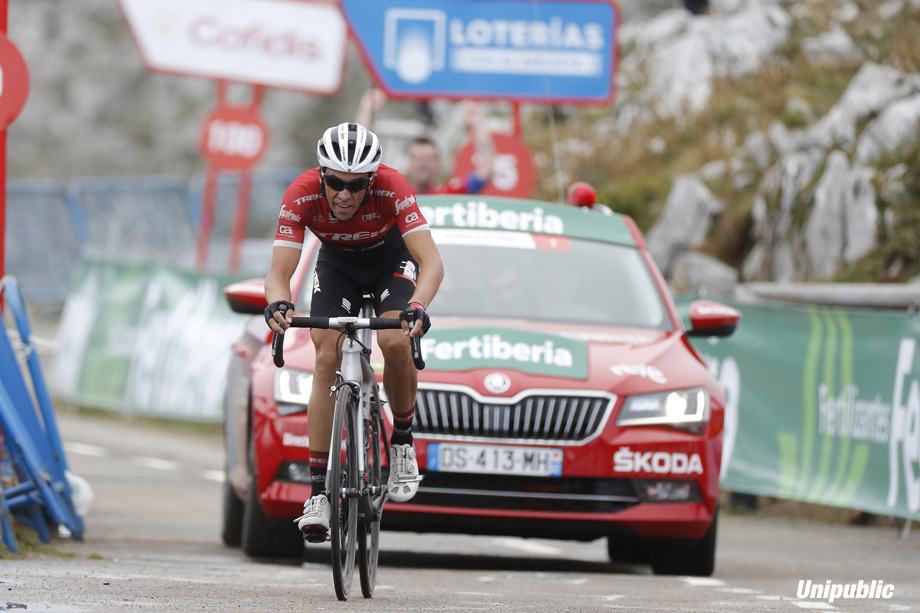 With five kilometers remaining, as the terrain became increasingly rugged and unforgiving, ‘El Pistolero’ found himself alone in the lead, around a minute ahead of Froome and the other favorites.

At this point, Steven Kruijswijk (LottoNL-Jumbo) set off in pursuit, escaping into the fog in an effort to bridge over to the Trek leader, but ‘de Kleerhanger’ could not make significant inroads into Contador’s lead and merely hovered a short distance ahead of the peloton.

Froome showed signs of fatigue in the finale but Nibali, perhaps weakened by his earlier fall, could not find it in himself to attack, and his Bahrain-Merida team-mates looked to be clumsily towing the Sky leader to overall victory. 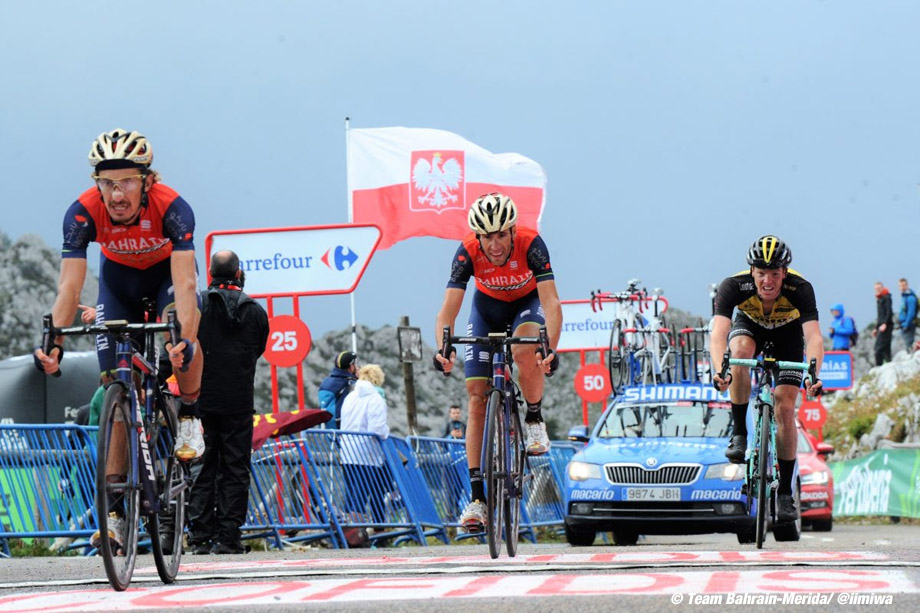 Nibali lost time on Froome and Zakarin, but held his 2nd overall place

Agony on the Angliru
Climbing higher and higher up the goat trail, the riders began to feel the effects of the wind, the cold, and the altitude. An acceleration from Froome’s loyal lieutenant, Liège-Bastogne-Liège winner Wouter Poels, suddenly sundered the group of favorites, leaving Nibali in the doldrums.

Behind Froome and Poels, who began pedaling their way back to Contador, contenders struggled for dear life and scrambled to save their positions. Kruijswijk paid for his earlier effort and his compatriot Kelderman also footed the bill as podium rival Zakarin moved out of his reach. 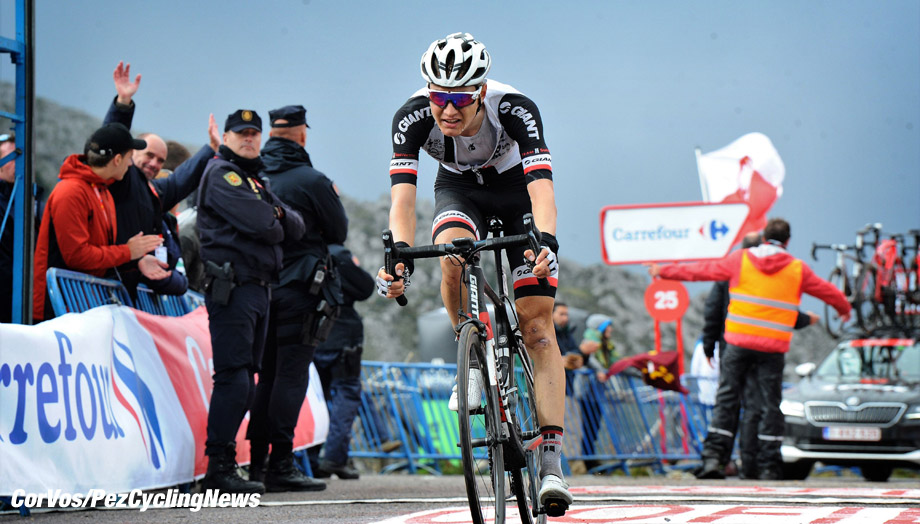 Kelderman lost his place on the podium

Riding through successive banks of mist, Contador rocked from left to right in his characteristic style, dancing on his pedals in an effort to keep his momentum. With every passing kilometer, his advantage dwindled but as he made it round the final few bends, escorted by race director Javier Guillen, there was still no sign of the Sky duo behind him.

The feted Madrileño offered himself the luxury of saluting his supporters, before performing his trademark victory routine, one last time. 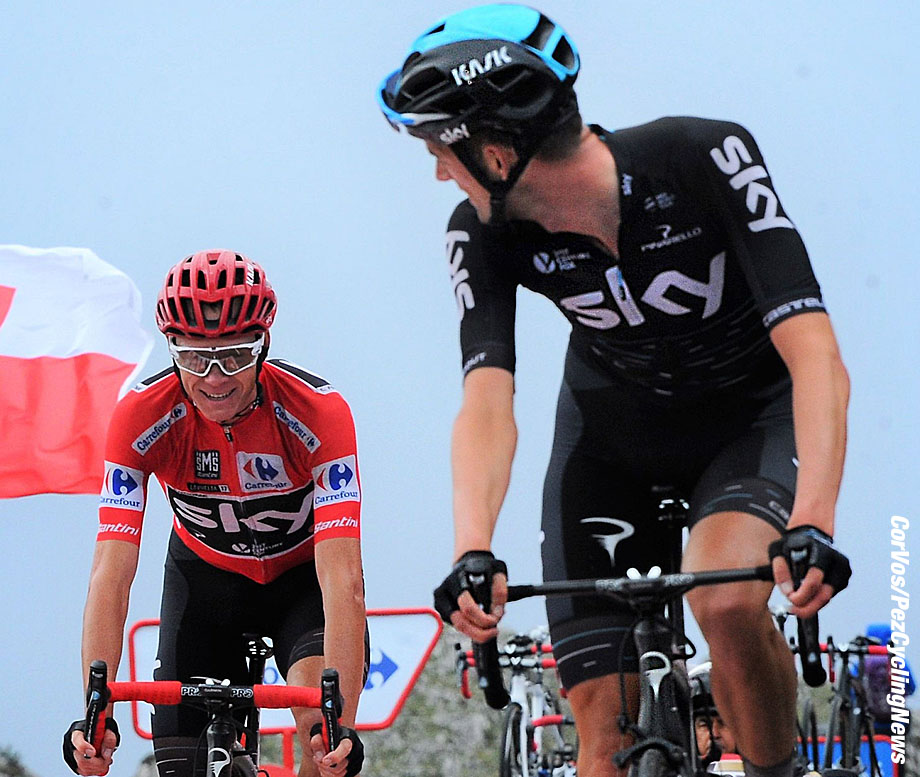 It was a very happy Chris Froome at the finish

Though he could not catch his old adversary on this occasion, Froome still smiled radiantly as he crossed the line with his Dutch sidekick, seventeen seconds in arrears. The Briton knew full well that the red jersey was now his for keeps. 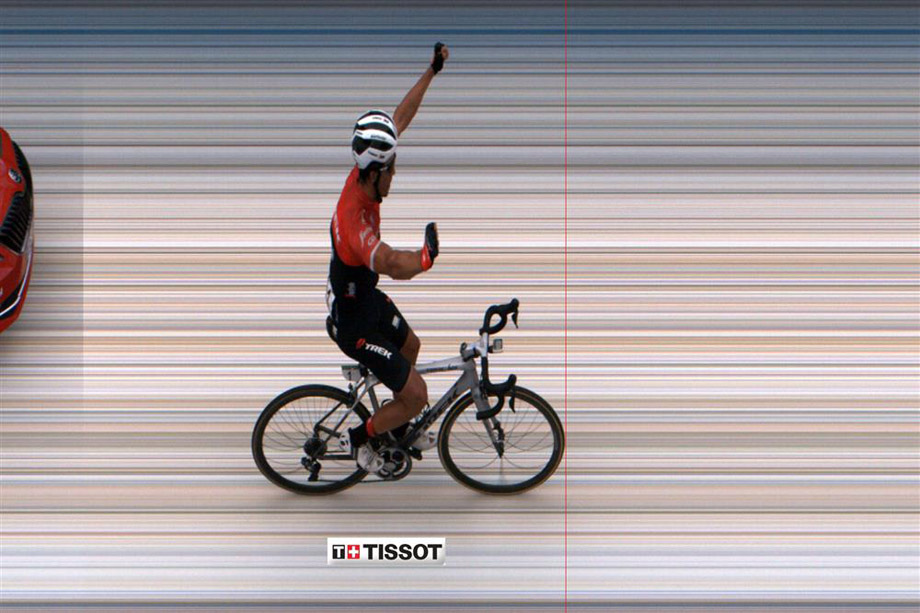 There was no need of the photo finish camera

Alberto Contador (Trek-Segafredo), stage winner and 4th overall: “There couldn’t be a better finale than this, winning in the Angliru to put an end to my career as a professional rider. This morning, I had it clear that it would be my day and that I had to say farewell in this fashion. I knew there was history in the downhill from Cordal with crashes in previous years. It was a hard day and in that moment we had to be careful with my teammate (Jarlinson) Pantano. I’m delighted with how things went.”

Stay with PEZ all the way to Madrid and Alberto Contador’s last pedal stroke.