Stage Report: Oscar Rodriguez (Euskadi Basque Country-Murias) was the surprise winner of the day as he paced the final climb perfectly to beat everyone else. Jesus Herrada (Cofidis) lost touch early on but he kept his red jersey as Simon Yates (Mitchelton-Scott) and Nairo Quintana (Movistar) won the battle of the GC contenders.

We might have had two first category climbs today but this was always going to come down to a battle on the wall like slopes of La Camperona, and so it happened. A huge break of 32 riders went clear at the start and it looked like they might start the final climb with a huge advantage, it wasn’t to be though, Movistar cranked up the pace and brought the gap under the six minute mark and there was a chance they would be caught on the final climb. Instead they took four minutes into the finish and Rafa Majka was the first to go. Merhawi Kudus briefly followed but he went into the red and was passed by Dylan Teuns. It looked like it would be a battle between these two but Oscar Rodriguez was hunting them down and with each pedal stroke he was closing the gap. He passed them both and despite some resistance by Majka it was a win for the Spaniard. Behind him the GC battle fizzed and Yates and Quintana showed they were the strongest as the rest of the GC contenders were split behind. Jesus Herrada hangs on to red though after a gutsy performance on the final climb. 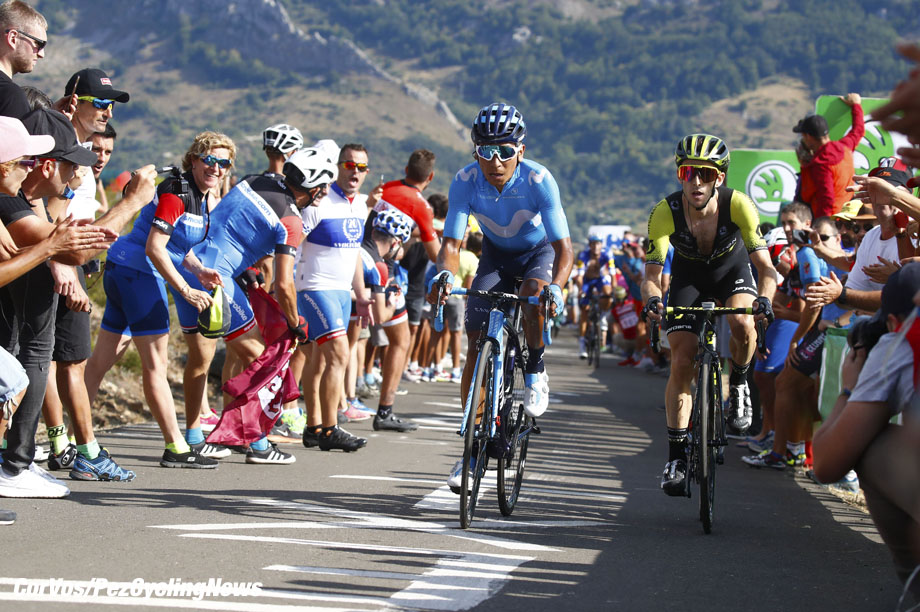 Quintana and Yates – Two for the final podium?

Route
This has been a bizarre Vuelta. Jesus Herrada sits in the red jersey after snatching it from Simon Yates’ shoulders when yet another breakaway succeeded. We are non the wiser about who is going to win, the gap between 2nd and 10th is just 43 seconds, the gap between 2nd and Thibaut Pinot in 18th place is just 2:20. It may sound like it’s been a cracker, but the race is really yet to hit its stride and even the two mountain top finishes we’ve had so far haven’t lured the GC contenders out of hiding. Today might be different. The race starts in Candas Carreno at 95m and climbs to the finish on La Camperona, 1,600m, in two big steps. The first is the first category Puerto de Tarna (11.7km at 6.1%) before a very short descent that takes us to the plateau from where we start climbing La Camperona. The final climb is also a first cat one with an ascent of 4.2km at 11.6%. The climb rises gradually from the mining town of Sabero but it really kicks off at Sotillos de Cabero where the riders get to enjoy 500m at 5.1% before 500m sections of; 14.7%, 17.6%, 18%, 11.6%, and 13.4%. This is a truly brutal way to end a stage and there will be no way for the GC contenders to avoid coming out to play. 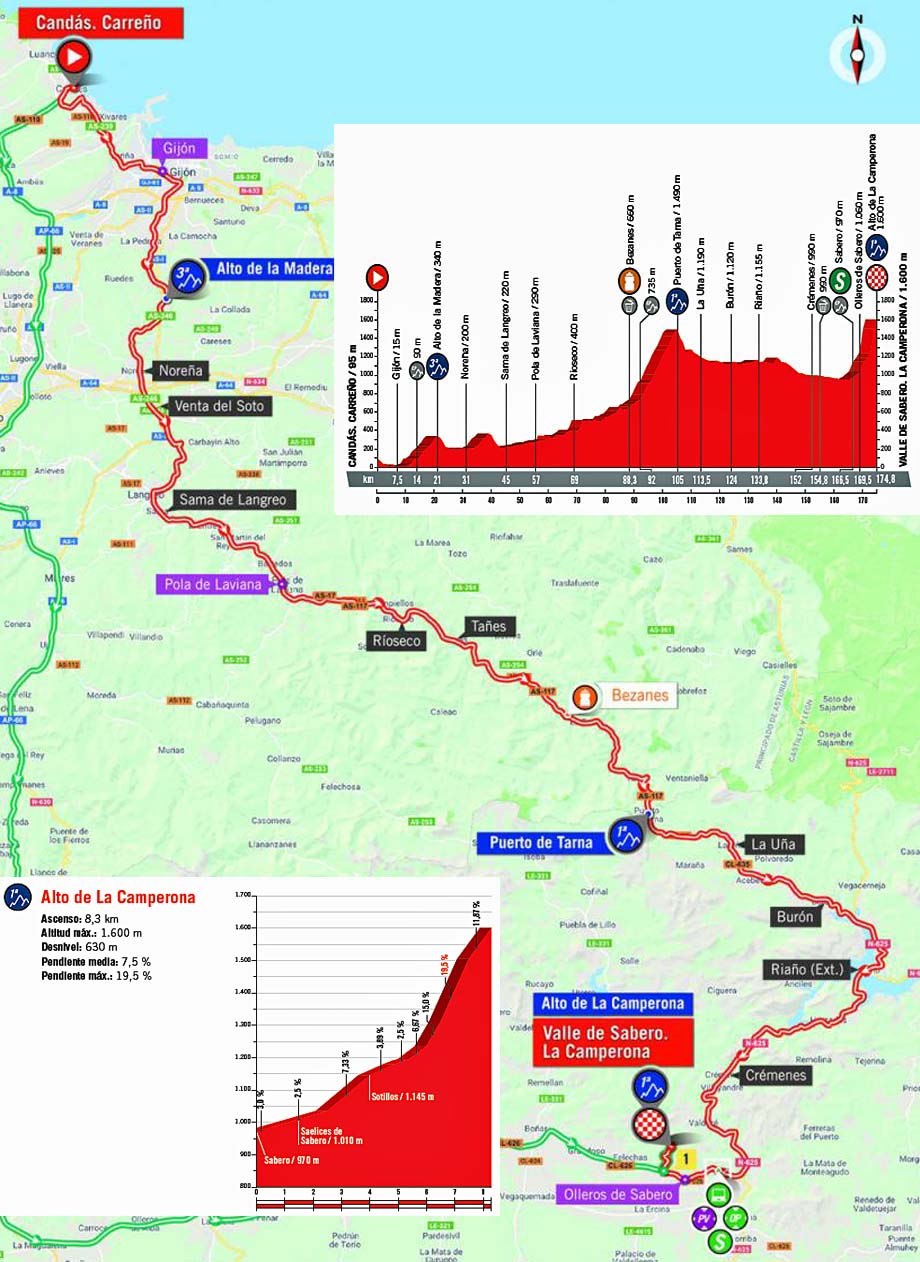 The Big Break
Breakaways had been given plenty of rope this year at the Vuelta and they had taken five of the first eleven road stages. The temptation to get into one was too great and after a small fight we had a very large group, 32 riders to be exact: Sander Armee, Thomas De Gendt, Bjorg Lambrecht, Maxime Monfort and Tosh Van der Sande (all Lotto Soudal), Bauke Mollema, Nicola Conci and Fabio Felline (all Trek-Segafredo), Marcus Burghardt, Rafa Majka and Jay McCarthy (all Bora-Hansgrohe), Eduardo Prades, Garikoitz Bravo and Oscar Rodriguez (all Eusakdi-Murias), Joey Rosskopf and Dylan Teuns (BMC), Laurens de Plus and Pieter Serry (Quick-Step Floors), Ben King and Merhawi Kudus (Dimension-Data), Ilnur Zakari and Jhonatan Restrepo (Katusha-Alpecin), Alex Aranburu and Christian Rodriguez (Caja Rural), Gorka Izaguirre (Bahrain-Merida), Ben Gastauer (AG2R-La Mondiale), Imanol Erviti (Movistar), Sergio Henao (Sky), Jai Hindley (Sunweb), Edward Ravasi (UAE Team Emirates), Jetse Bol (Burgos-BH), and Luis Angel Mate (Cofidis). Race leader Jesus Herrada (Cofidis) had briefly been part of the break but he had fallen back when it was clear they weren’t going to stay clear with the red jersey in their ranks.

The gap slowly crept out towards the three minute mark after a first hour of racing where almost 45kms were covered. Cofidis were trying to control things behind but they weren’t making much of a dent on the massed ranks of around 20% of the peloton. The gap went through five minutes, then six and with 100km to ride it was 7:15. 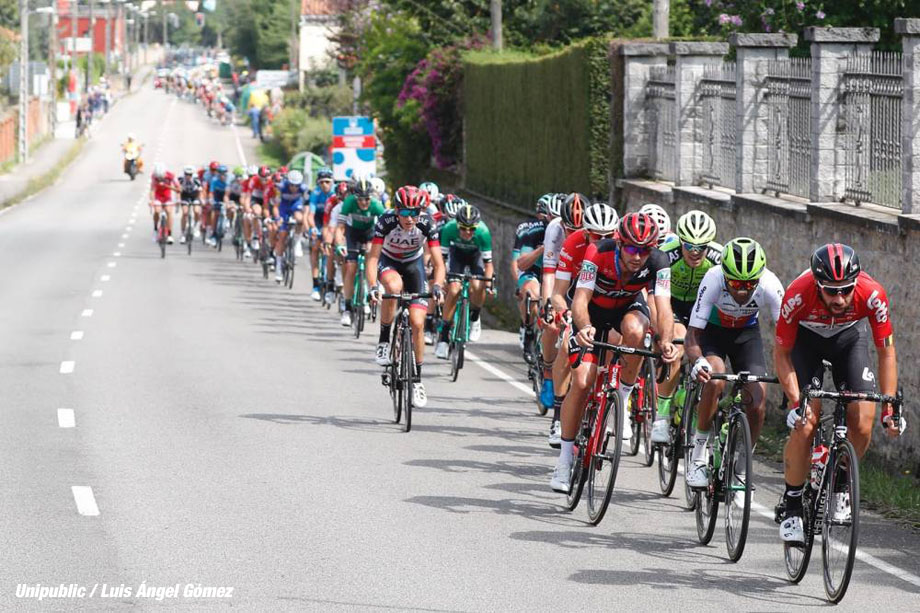 That was one big break!

The break’s lead had grown virtually unchecked but with the risk that this would get out of hand Cofidis were sent packing and the GC teams of Movistar, Mitchelton-Scott and LottoNL-Jumbo were on the front. Winner Ancona (Movistar) was doing most of the hard work as they began the grind towards the summit of the Puerto de Tarna. The Colombian was slicing into the advantage and he the gap was trickling down from a high of nine minutes. Halfway up the climb the gap was right down to 6:30 and the peloton were fragmenting. The break were also starting to dissolve under the pressure and Van der Sande and Bravo were the shelled out. At the summit of the climb there hadn’t been any significant time loss and the break led with 6:22. 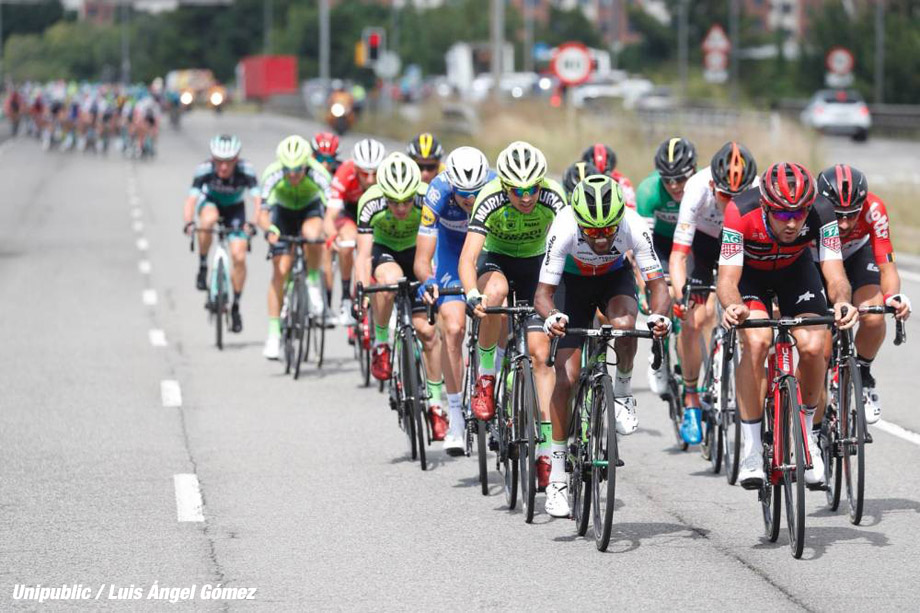 The King of the Mountains jersey had looked like it was going to be a walk in the park for Angel Mate but Ben King and to a lesser extent Bauke Mollema and Thomas De Gendt were serious contenders now. King was the first to the summit with De Gendt in second and Mate a distant third. King was now 24pts behind Mate with most of the hardest stages still to come.

Hitting a Plateau
The riders were now flying along the plateau between the first climb and our finishing climb. The gap was six minutes and it was still falling as Cofidis came back to the front to help out. Movistar were fully committed as well and the gap was falling, although slowly as everything settled down before the showdown on La Camperona.

There was a moment of drama in the break as some of them took water bottles from the roadside and Jay McCarthy took a tumble bringing down both King and De Plus, although all three were back on their bikes quickly. 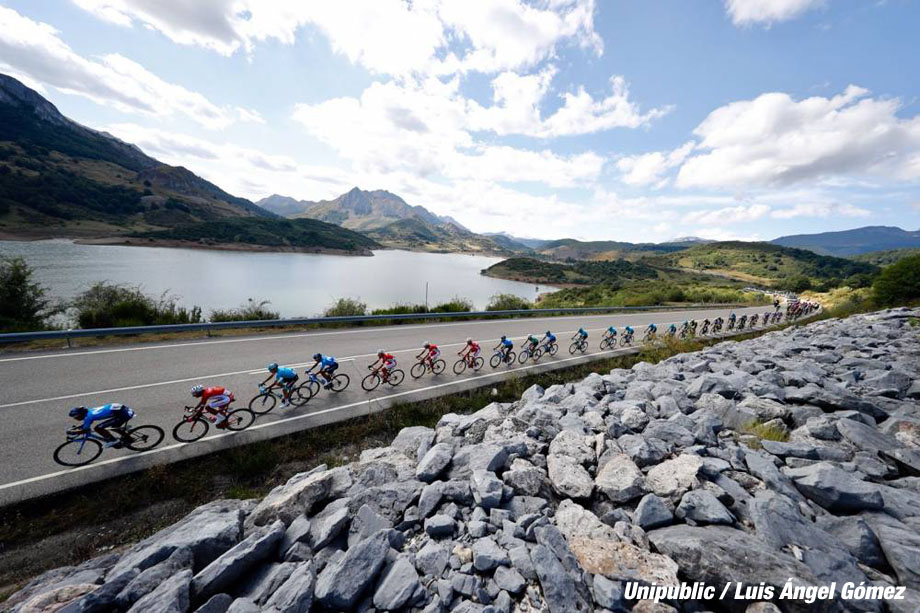 Movistar and Cofidis were in control of the peloton

The peloton were strung out in one long line, they had cut the gap to 4:15 with under 20km to go. If this was a flat finish you could mark it down as a win for the break but with the peloton charging and if it exploded on the final climb, that gap would melt away very very quickly. The gap was 3:46 with 8km to go and the break were suffering as the pace continued to creep up.

I had been to watched the stage on La Camperona in 2016 and I was struck by just how hard the uncategorised parts of the climb were, they were nothing like the walls of the true climb but they were just constant rolling roads with some serious steps that ensured you hit the bottom of the steepest section with some tired legs. 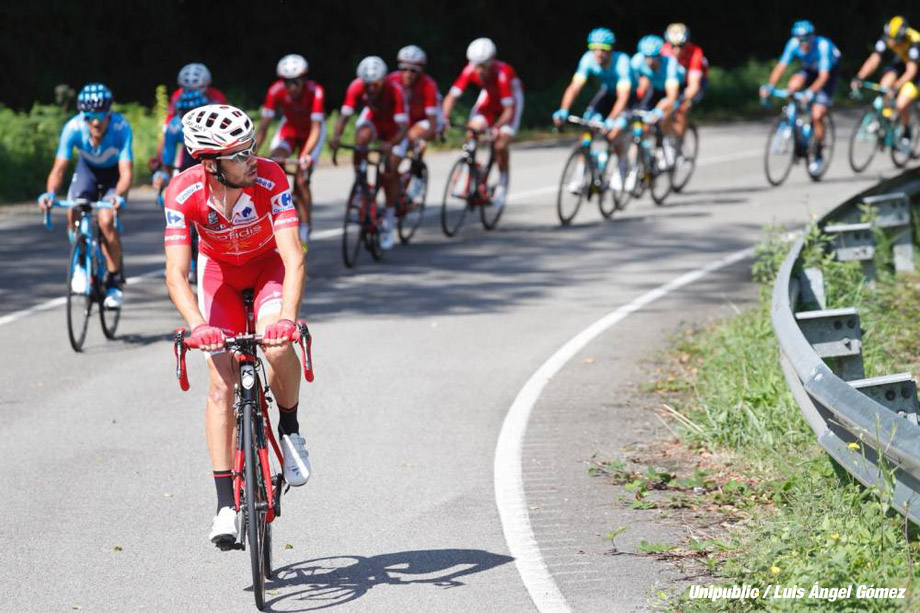 Climb the Wall!
So it begins, Trek-Segafredo were on the front for eternal second place Bauke Mollema. Bora-Hansgrohe were also setting it up for Rafa Majka as the gap was 3:22 with 4km to go, it was advantage break but still a chance the peloton could bring it back. Omar Fraile (Astana) was leading the way in the peloton as the Kazakh team fought to set up Miguel Angel Lopez who was within punching distance of the red jersey.

As we entered the village at the foot of the climb Ilnur Zakarin put a dig in but he was happy to ease off the pace and leave it to Ben King who was the next to push to the front. The steepest pitches were beginning. Majka was on the front and he was splitting it up, only Kudus and Zakarin could get close. Zakarin was quickly going backwards though and it was Kudus, the Eritrean champion, who was sat on Majka’s wheel. Kudus was suffering though, he lost a bike length, then another and he was passed by Teuns.

Meanwhile the peloton hit the bottom of the steepest slope and there was no more than 20 riders in the GC group. Herrada was dropped as well and Simon Yates was driving the pace, would the Spaniard lose the jersey today? 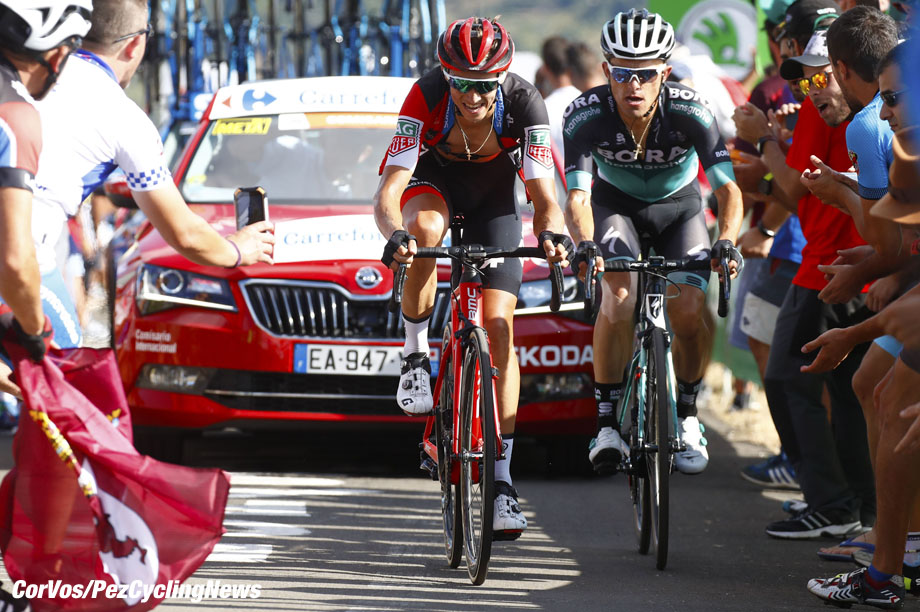 Teuns and Majka had a battle on their hands

At the front it was a battle between Teuns and Majka, there was nobody else in the picture at the moment and Teuns was leading and beginning to hurt Majka.

Jack Haig (Mitchelton-Scott) was doing the pacemaking and he was hurting the GC riders and especially hurting Herrada who had already lost 45 seconds.

It wasn’t just going to be a battle between Teuns and Majka though as Rodriguez of the Euskadi-Murias team now made contact, he hadn’t just made contact though, he’d gone by them and was now making for the summit.

In the GC group Wilco Kelderman (Sunweb) was on the front and Thibaut Pinot (Groupama-FDJ) was sliding out the back. The rest of the GC contenders were there though, but then Miguel Angel Lopez was off his bike, he’d dropped a chain and the GC group were going away. 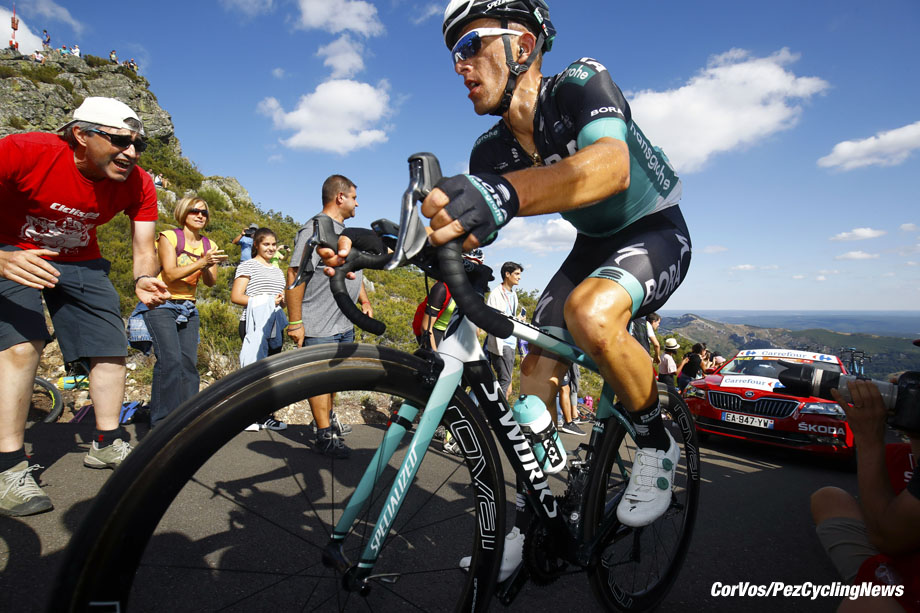 Rodriguez was flying though, Majka was chasing but he wasn’t going to catch him. What a sensational performance from the young rider who had gone out the back at the start but paced himself perfectly to take the victory. Majka was second and Teuns finished off the podium. 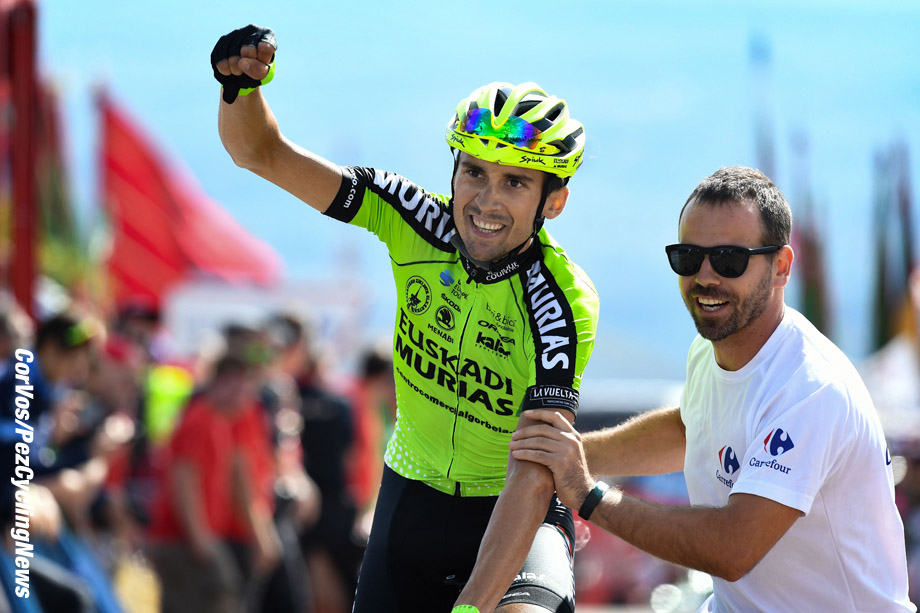 Rodriguez happy to cross the line

In the GC battle Yates and Nairo Quintana (Movistar) were clear as the climb leveled off slightly. Quintana kicked for the line and he finished just ahead of Yates with Pinot, who had made a remarkable comeback, Alejandro Valverde (Movistar) and Kelderman who was putting together a fine effort in the GC battle. Ion Izagirre hadn’t had the best of days but his brother Gorka had virtually rolled to a standstill to wait for him and pace him home. 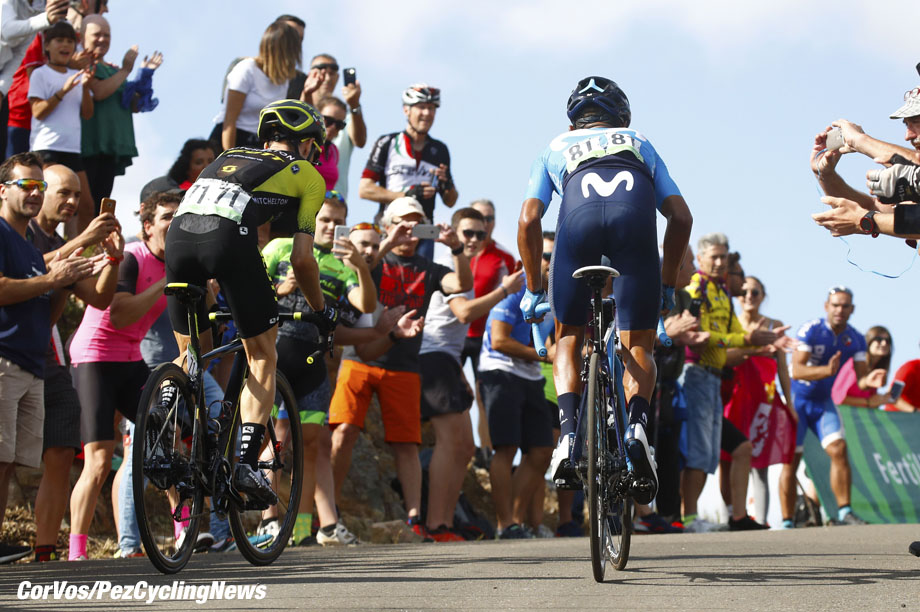 A few seconds for Quintana on Yates

The GC battle had been started but there were no knock out blows yet, however some people nursing a bloody lip were Emmanuel Buchmann (Bora-Hansgrohe) who had handed 47 seconds to Quintana, Fabio Aru (UAE Team Emirates) had also fallen away giving back 54 seconds. It hadn’t been a knockout though and although it looks like Quintana and Yates are the men to beat, there’s still a lot of riders with a chance.

Nonetheless this day went to Oscar Rodriguez who was in the initial break and paced the final climb perfectly to beat his more illustrious escape mates. 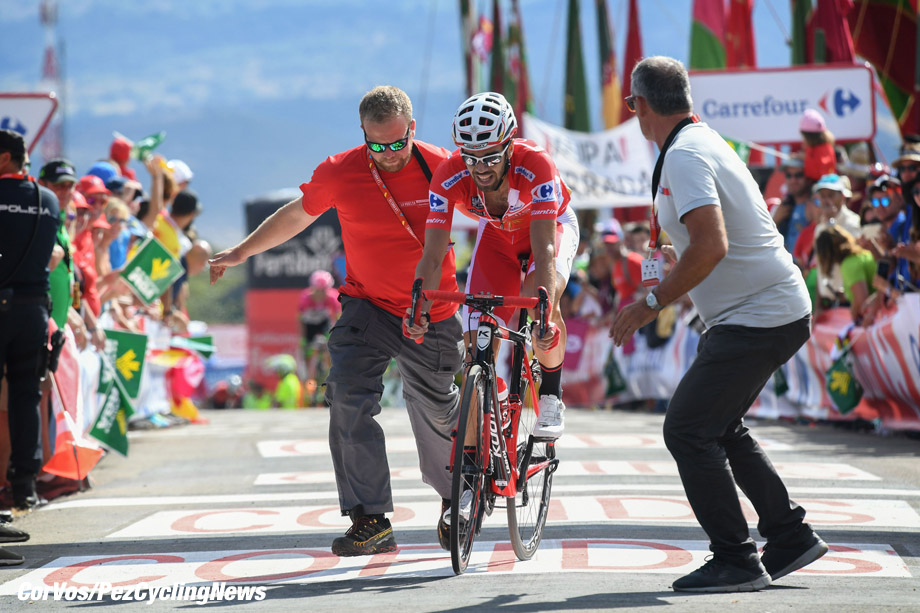