Stage Report: Thibaut Pinot (Groupama-FDJ) won again at the 2018 Vuelta a España as he profited from Simon Yates’ work to go clear at the top of the climb of the Coll de la Rabassa in Andorra. The Brit in the Mitchelton-Scott team put another few nails in the GC coffin and now sits 1:38 ahead of a struggling Alejandro Valverde (Movistar). Still one big day to go… 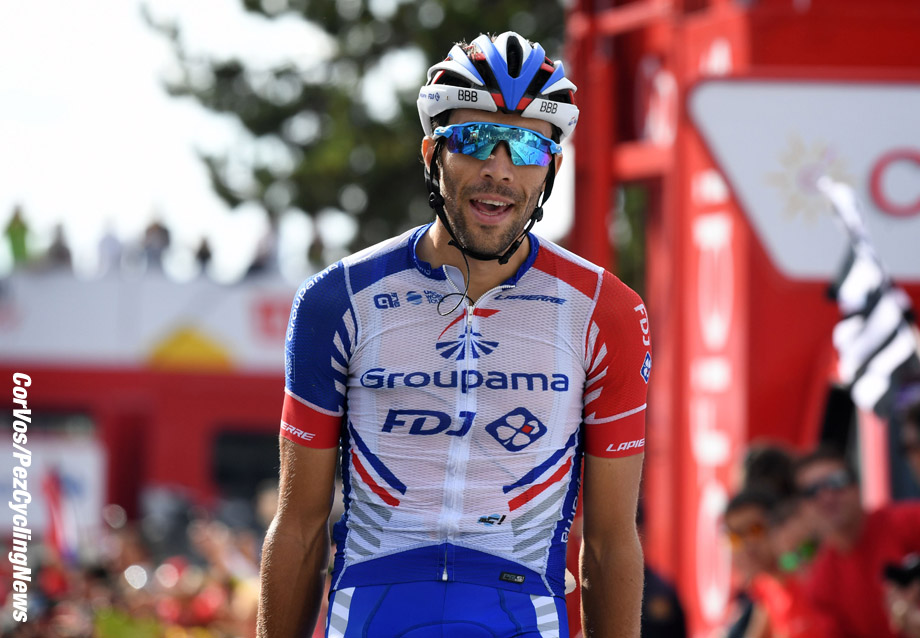 Two Vuelta stage wins – The Worlds next for Thibaut Pinot?

It took a long time for the break to go as Movistar set a furious pace from the start. Eventually two men went clear but they enjoyed less than an hour in the lead and they were caught as soon as we started climbing. Movistar continued their pace making on the lower slopes of the climb but it was LottoNL-Jumbo who really made it hurt in the finale. George Bennett and Steven Kruijswijk went alone with 12km to go and Nairo Quintana bridged over. Simon Yates used his team to the max before jumping clear and joining Kruijswijk and Quintana, and Thibaut Pinot who had jumped across previously. The Movistar trap, with Quintana going clear and Valverde bridging over, turned to nothing as Quintana was called back, then punctured, then caught back on before fading again on the later stages. Valverde couldn’t follow Simon Yates and soon he couldn’t follow anyone else as Enric Mas and Miguel Angel Lopez went away inside the finalé to gain around 20 seconds on Valverde. Valverde was looking ahead to the red jersey today but he might be looking behind him tomorrow, Kruijswijk is just at 20 seconds and Valverde has less than a minute lead on both Miguel Angel Lopez and Enric Mas. 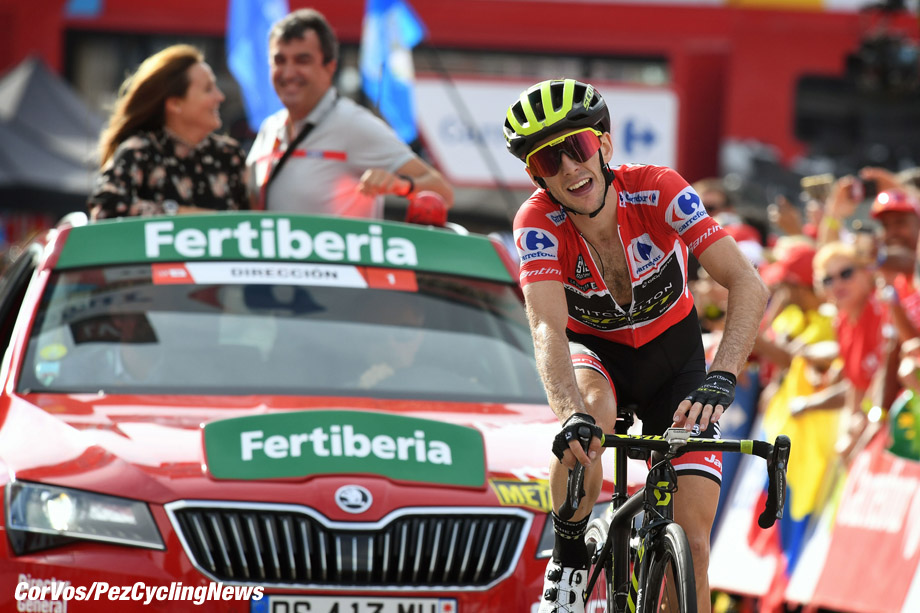 Route
Its come down to this, there’s six men still in the GC battle and two mountain stages to overcome. Simon Yates is in pole position but he is being hunted by the evergreen Alejandro Valverde and to a lesser extent Enric Mas, Miguel Angel Lopez, Steven Kruijswijk and Nairo Quintana. Mas has been the real revelation, he’s filling the last podium spot after finishing 71st at the Vuelta last year. Nairo Quintana continues to look a long way short of the Quintana who burst onto the scene back in 2013, will we ever see him again?

Stage 19 is the penultimate opportunity for riders to gain time, but it’ll be a slow burner. The stage starts in Lleida and finishes 154.4km later and 1,855m higher in Andorra. The stage is uphill all the way but the real climbing doesn’t start until we’re in Andorra with 20km to go, that’s when the race heads up towards the Pyrenean adventure park of Naturlandia. The hardest part of the climb is the first 7km where the gradient doesn’t drop below 6% apart from in the second kilometre. This section also feature slopes 12.6 and 11.1%. It levels after that though, the final 10.3km only go above 6% briefly and generally stay between 4-6%. If an attack doesn’t go in the first 7km it’s going to be increasingly hard to stay clear on the flatter top section but this is also a climb that suits Alejandro Valverde. If you can survive the first 7km then you can recover and then go hard towards the top. The stage tomorrow definitely has the potential to cause more time gaps but the likes of Quintana and Kruijswijk can’t wait until then to try and claw back time. One thing to remember, it was the last Friday of the race at the Giro when Simon Yates blew quite so spectacularly. 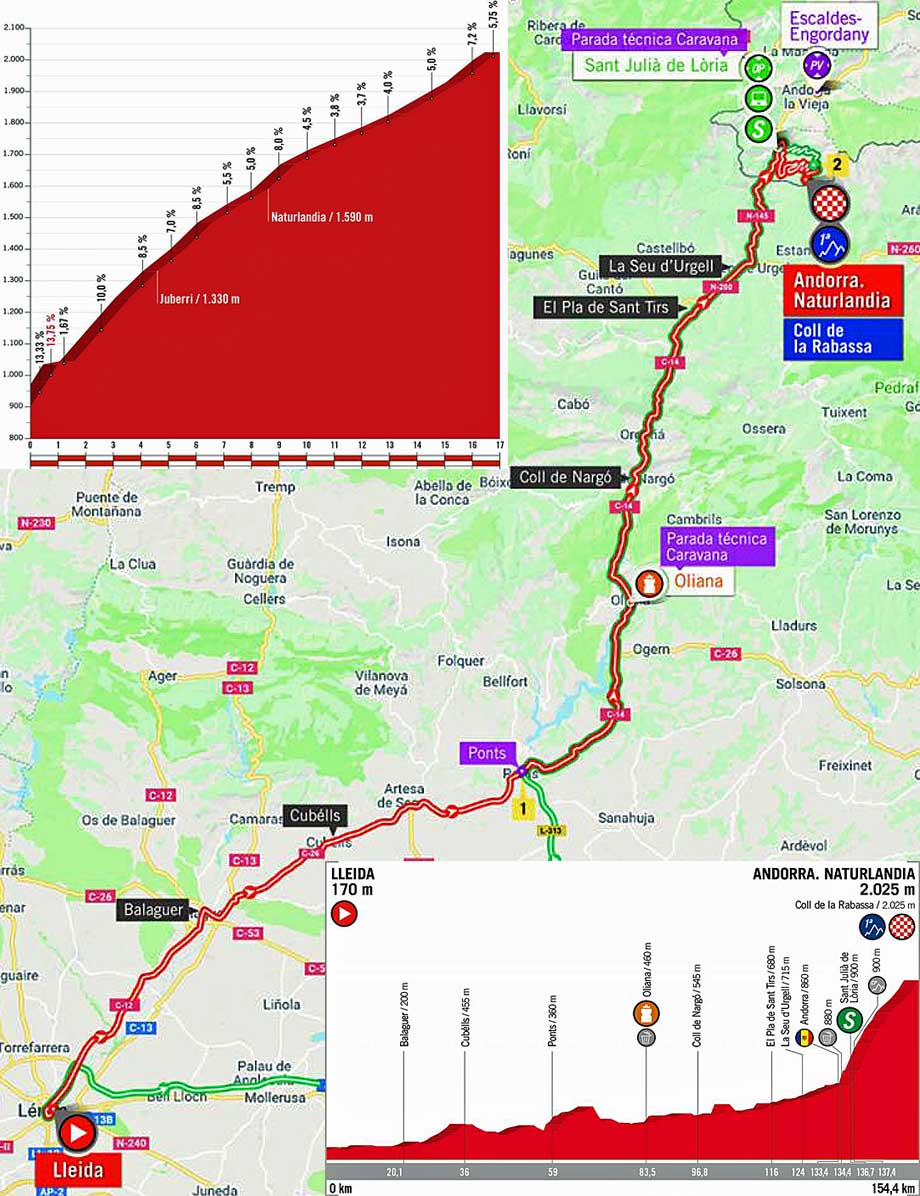 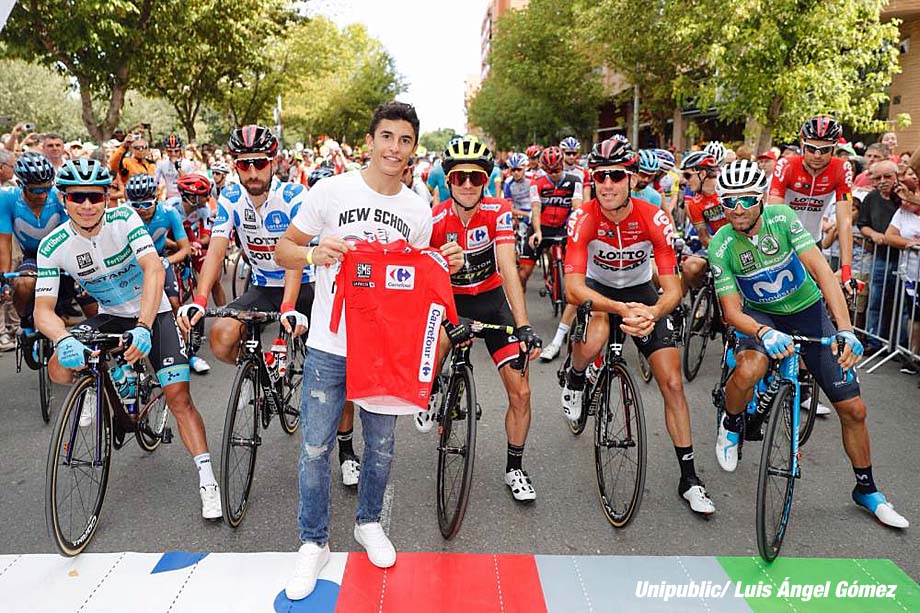 MotoGP champion, Marc Márquez was at the start in Lleida

Fast Start
The breakaways had the upper hand in the Vuelta so far but in the final week they’d been finding it hard to get away and that was the case today. The race was 75km deep before anything had looked like it was going to go clear. Multiple breaks had formed and then been brought back and the peloton were lined out in one long line and it wasn’t looking like it was going to slow down. No break had gained more than 30 seconds and the Movistar led peloton weren’t keen on slowing down. 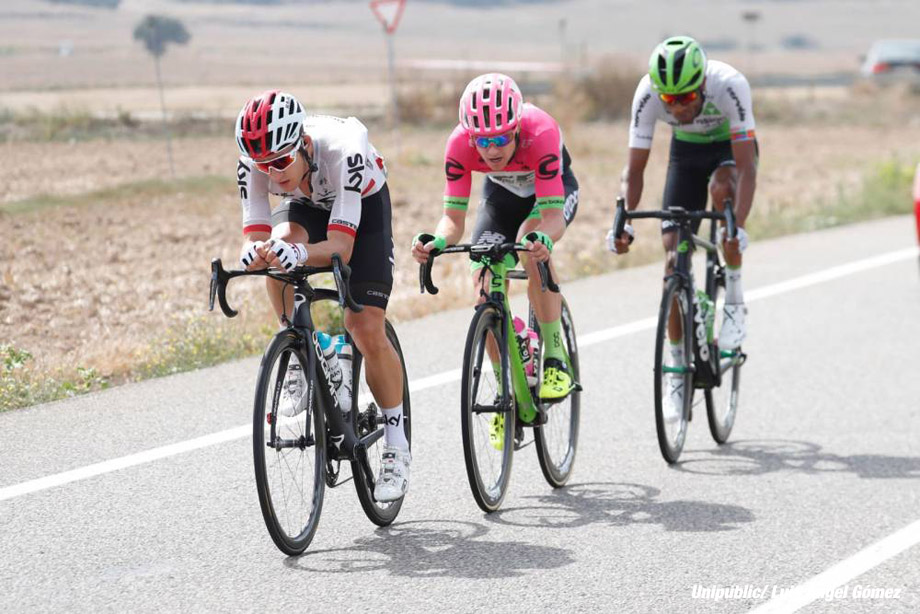 There were many attempts to escape, but…

Eventually, eventually, the pace relented enough for a break to go clear and we had two leaders with just over 50km to go; Benjamin Thomas (Groupama-FDJ) and Jonathan Castroviejo (Sky). We had seen bigger groups try and go clear earlier but these two were the straws that broke the camels back and they were now leading by two minutes as Movistar continued to drive the pace. 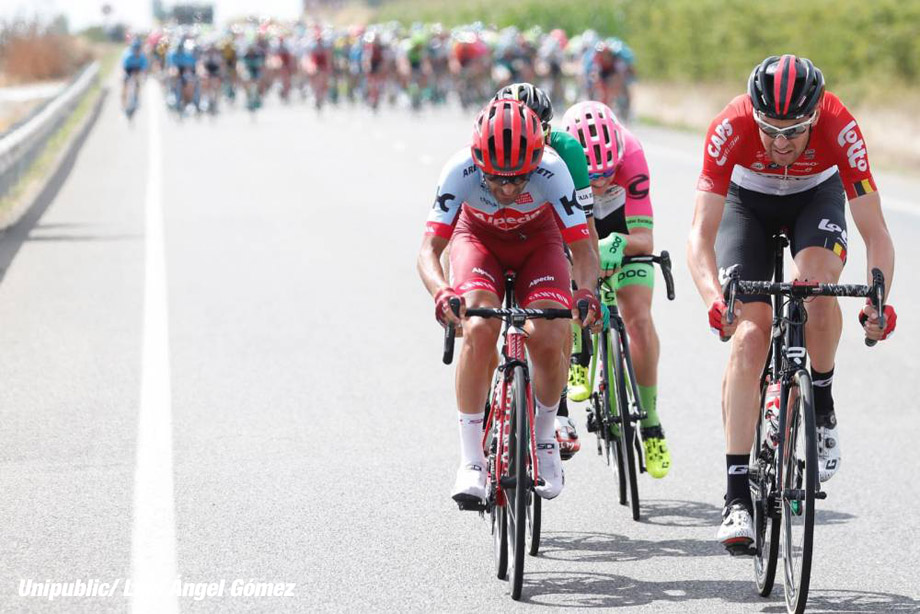 It wasn’t a day for the break

Movistar may have history when it comes to being rubbish in crosswinds but they were trying to dish out some punishment on the valley roads. They hit the front with purpose and the peloton split completely. The break lost 30 seconds in 3km and peloton were torn apart but as they hit the next town the pace eased and it was all back together. This stage was coming to the boil nicely, Movistar were here to take the red jersey. 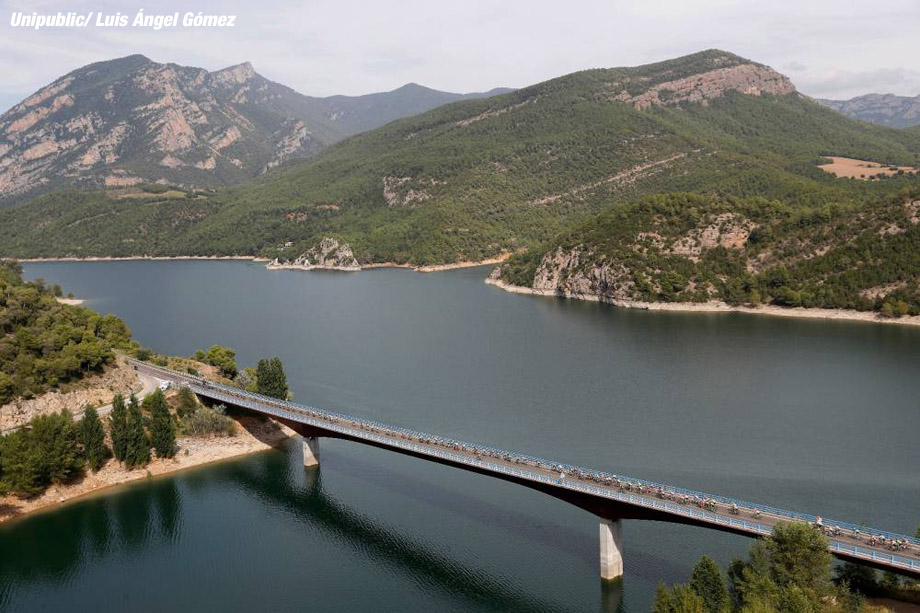 The break’s lead was now just 1:20 and although Movistar had eased off the pace making slightly there wasn’t much hope left for these two. We were beginning to look ahead to the climb and the finish of the penultimate stage where things might change in the standings. 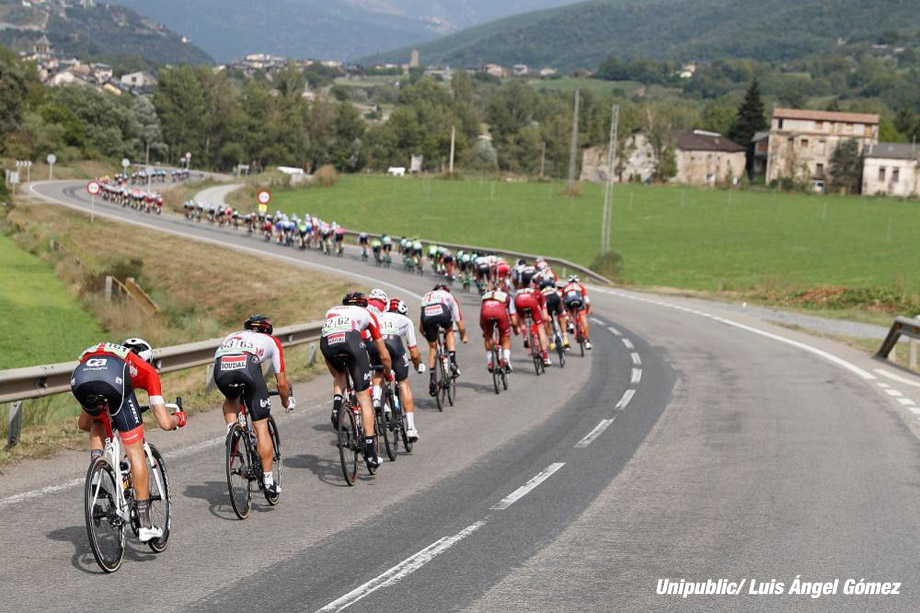 A fast day for everyone

Andorra
The break went through the custom’s check point with 21.5km to go and their led was just over a minute. They might make it onto the climb but how long they’d be there? Who knows? The teams were hogging the front of the peloton and there were a lot of nerves as we approached the hellish first 7km of the climb.

We hit the climb and Movistar were all over the front with LottoNL-Jumbo looking threatening. Winner Anacona was leading and Nairo Quintana was perched in second place. The leading group was barely 30 riders deep and we had been climbing for less than five minutes. Quintana was backing off though and he was leading Valverde now as LottoNL-Jumbo continued to mass on the front. The gradient eased in the second kilometre but it was soon to pick up to 9.3%. 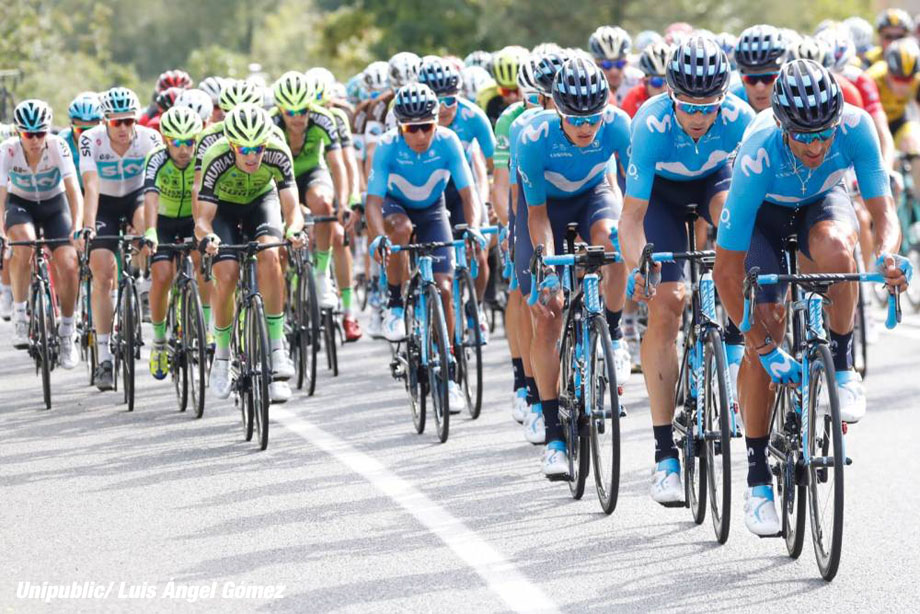 Movistar had a plan

Movistar continued to lead as the gradient climbed and the riders who had been able to cling on during the initial section were now falling off the back. Ancona’s initial pace making had been fierce and it had split the peloton but he wasn’t causing problems for the serious GC contenders and it looked like LottoNL-Jumbo would take over and really up the pace. George Bennett (LottoNL-Jumbo) took over and he was ramping up the pace. But with 12.7km to go Nairo Quintana jumped clear and he was followed by both Bennett and Steven Kruijswijk (LottoNL-Jumbo). The trio had a lead of about 30m and Mitchelton-Scott were forced to chase. Bennett blew after driving the pace and it was Kruijswijk and Quintana with the same 30m lead. Thibaut Pinot (Groupama-FDJ) was the next person to go clear and he linked up with the leading duo. 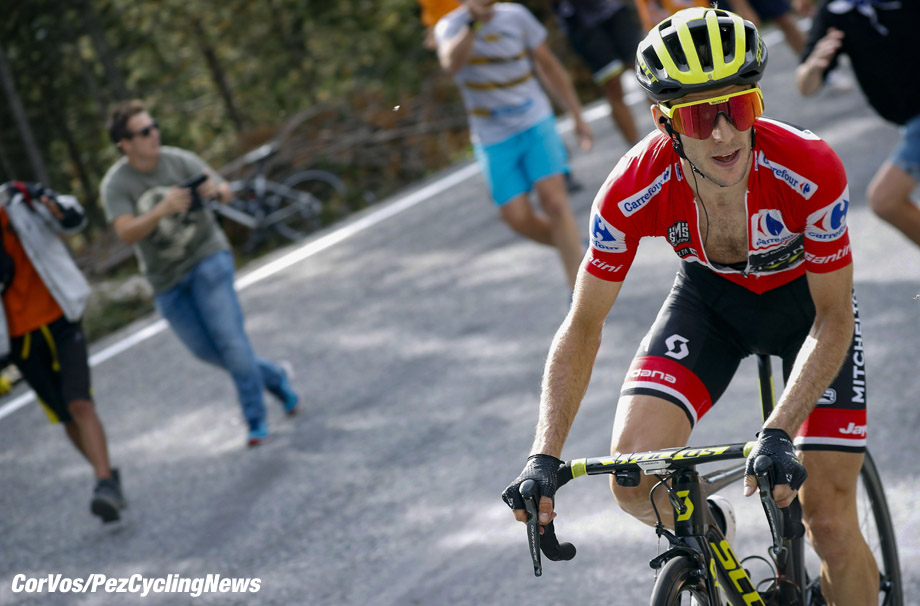 When Simon Yates attacked, it was impressive

The gap was slowly creeping out but none were an immediate threat to Simon Yates (Mitchelton-Scott). Pinot pushed on and Kruijswijk was the first to respond, Mitchelton-Scott hadn’t closed this down yet but there was certainly a concern that Valverde maybe able to link up with Quintana further up the climb when the gradient eased. Knowing the risk, Simon Yates pushed on and linked up with the trio and the four were now heading up the climb together. Yates wasn’t just covering himself he was pushing on and he was making Quintana suffer. Movistar were doing the chasing behind but their bluff had been called and they were now on the back foot. The gradient was biting and Ion Izagirre (Bahrain-Merida) was the first of the main GC contenders to get caught out. 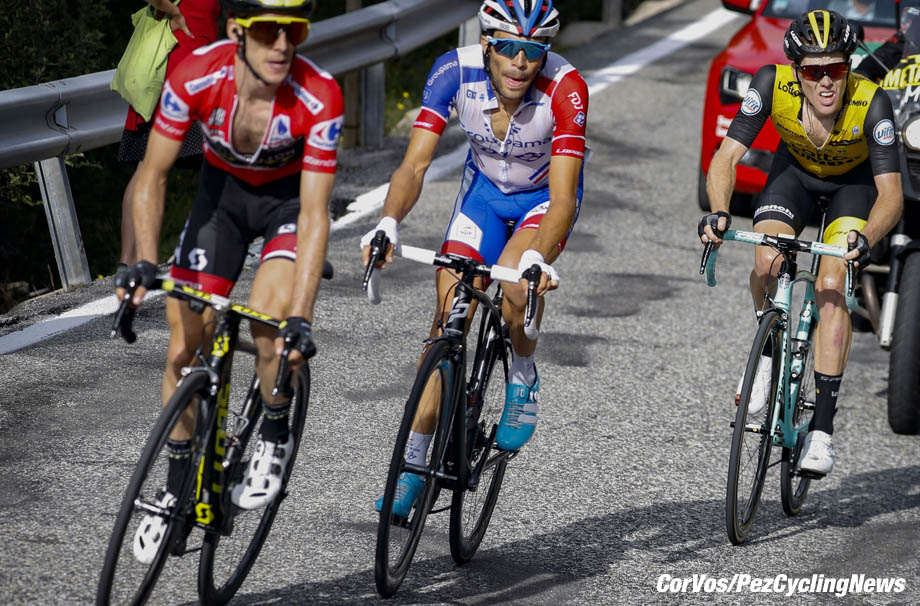 Once Nairo Quintana was dropped it was all about these three at the front – Yates, Pinot and Kruijswijk

The gap to the leading quartet was still less than 30 seconds but the impetus had gone out of the chase and Valverde wasn’t keen to come through and help with the chase and Quintana was sent back to assist. Movistar had run out of riders and Enric Mas (Quick-Step Floors) was also caught in the chasing group, his podium ambitions were disappearing up the road with Kruijswijk. Miguel Angel Lopez (Astana) also wasn’t able to contribute and the gap was 24 seconds as the steep early part of the climb stopped and the flatter second half started. Quintana had punctured and the trap that Movistar had set was now catching them. Valverde had no support and the gap to the front was 29 seconds. Would Valverde now wait for Quintana to get back in, if he could, or would he start the chase by himself? Quintana had received a huge push from the mechanic and he was now back in and helping Valverde but the Spaniard was really suffering and couldn’t close the gap. The gap to Yates was now a minute and Wilco Kelderman (Sunweb) was halfway across the gap and climbing into the top ten. If this gap kept growing there was a chance that Kruijswijk was going to move into second. Yates was leading the way inside the final 2km and the gap was over one minute, he was riding himself further into red and he was also dragging Kruijswijk up with him. 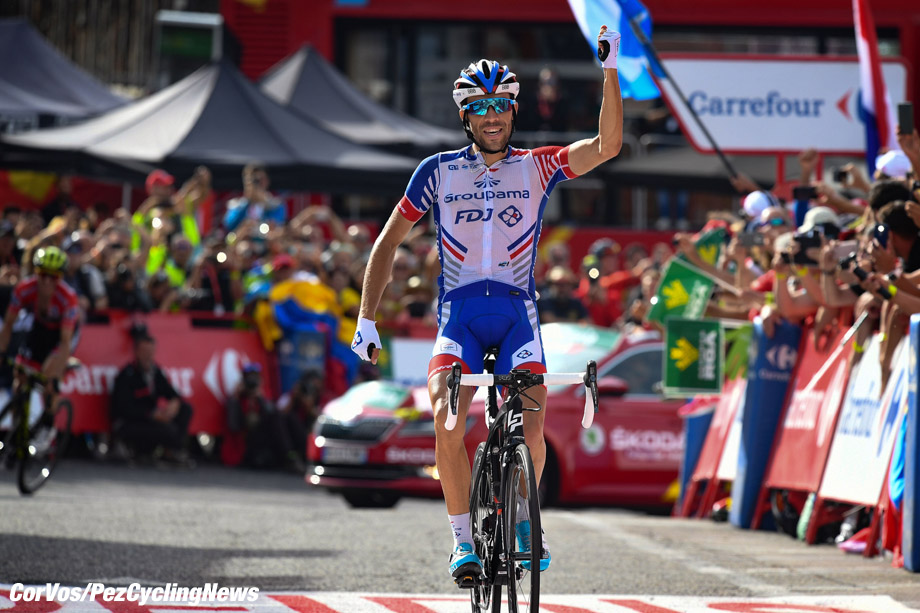 Miguel Angel Lopez went again but the climb was flat now, he drew Enric Mas with him and the Spaniard went over the top but despite gapping Valverde he eased off and Angel Lopez went again. Meanwhile, Yates and Pinot were distancing Kruijswijk but the Dutchman was still within striking distance. Valverde had gone pop though, Movistar had poured everything into the day and the only people they’d hurt were themselves, it was another example of ineptitude by the Spanish team. 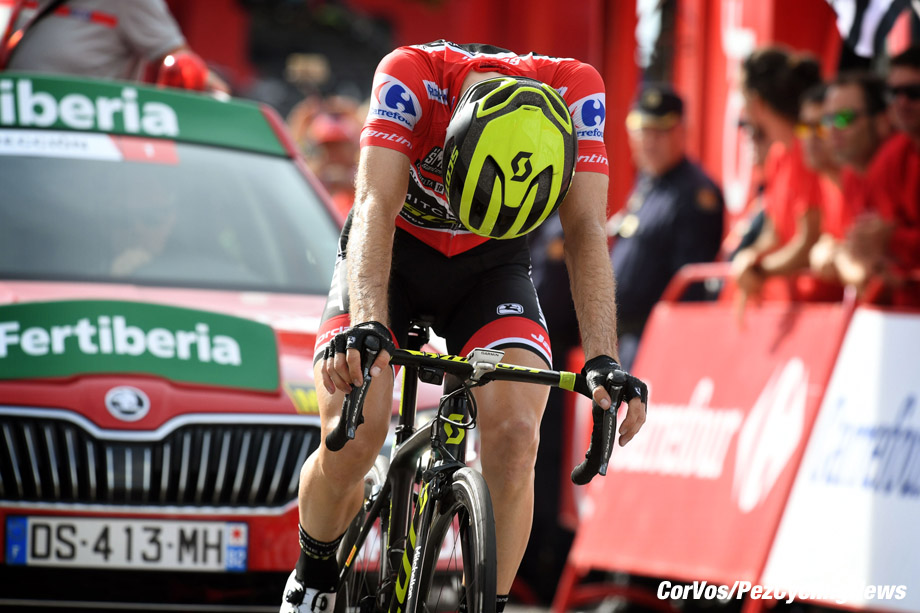 100% from Simon Yates to put 1:07 into Alejandro Valverde

Yates and Pinot flew into the final 500m with the Brit doing all the work trying to pad his lead. Pinot had enjoyed the easy ride on Yates’ wheel and he struck for home with 100m left to ride to win his second stage. Kruijswijk followed them home around five seconds after Yates. Mas, Miguel Angel Lopez and Rigoberto Uran (EF Education First-Drapac) came home just under a minute behind with Valverde losing 1:12 and Quintana almost two minutes. The final climb hadn’t looked like much but Movistar had driven into it so hard that they had completely blown apart their support riders and when they needed help Valverde and Quintana had none. Simon Yates’ lead isn’t unassailable but he’s gone a long way to making it a British Grand Slam in the Grand Tours. 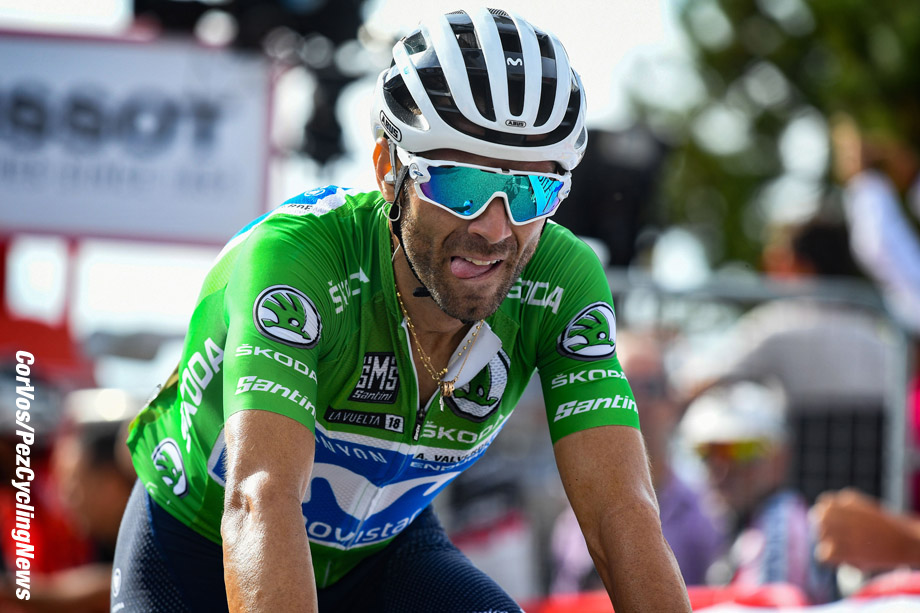 A minute down for Valverde – Not the day Movistar wanted 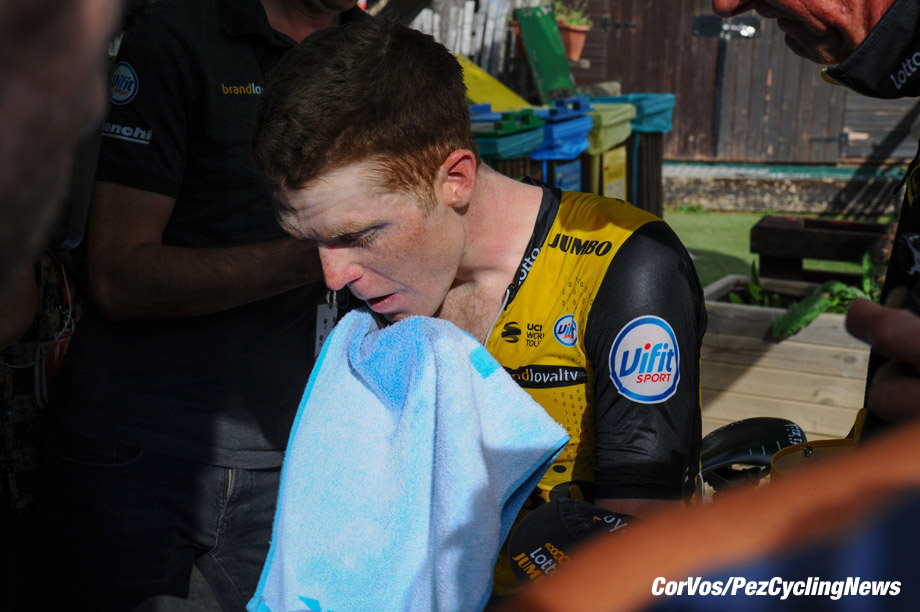 It was a hard day for Steven Kruijswijk, but he is on the Vuelta podium