Stage Report: Ben King took just Dimension Data’s sixth win of the season as he out-duelled Nikita Stalnov of Astana on the long run to the finish. The GC contenders emerged into the race and the big winner was Emanuel Buchmann of Bora-Hansgrohe who closed to within seven seconds of race leader Michal Kwiatkowski (Sky), the Pole retained his jersey. 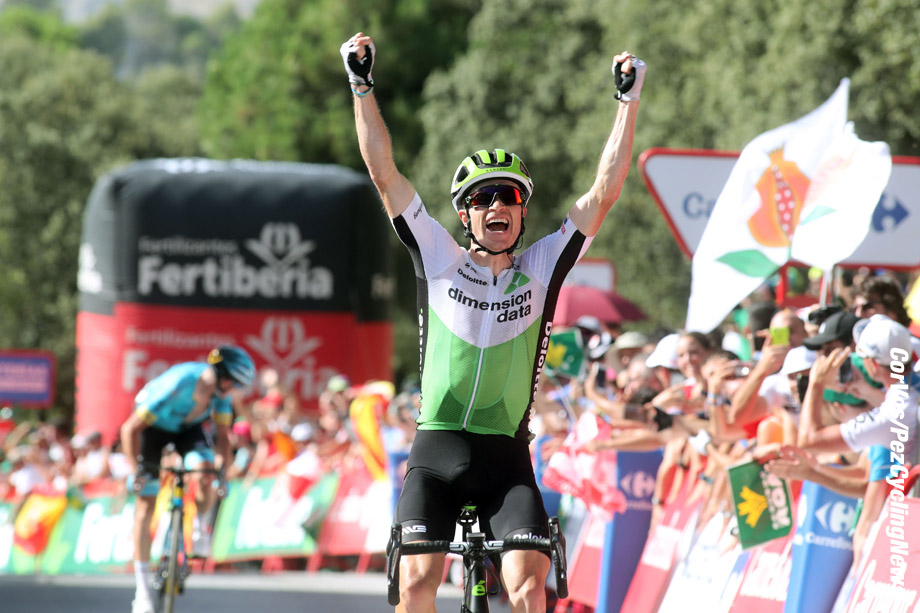 The big win for Ben King

This was the first GC battleground of the 2018 Vuelta a España and although the parcours didn’t look exceptional it created some exciting racing. It was clear that the nine man break was going to stay clear after the first climb but what was less clear was who would win and would the red jersey change hands. Ben King and Jelle Wallays went clear prior to the final climb and they were joined by Nikita Stalnov. 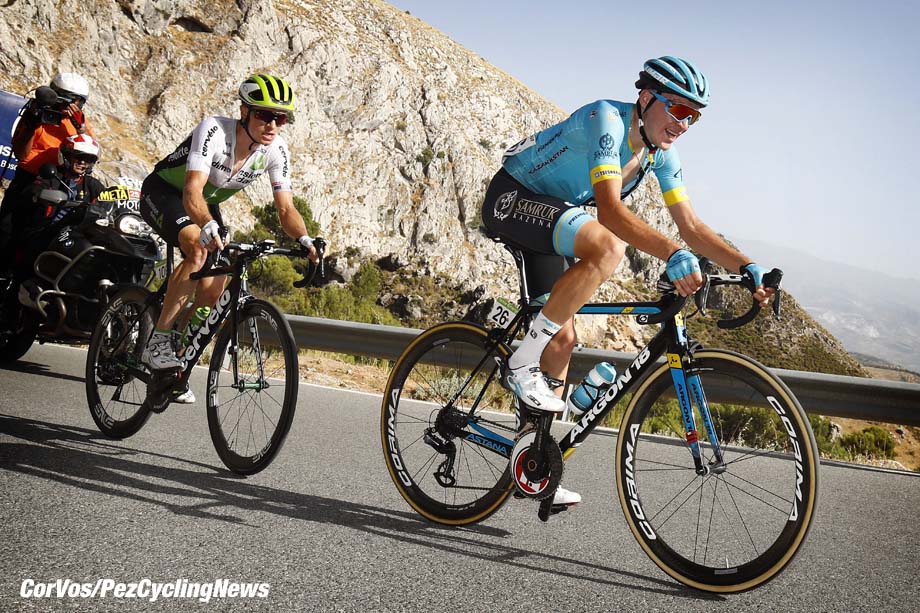 King and Stalnov went for the stage win

Wallays lost contact early on in the climb and it looked like it was going to be a fight between Stalnov and King for the stage victory until Pierre Rolland began to chase on the final climb. It looked like the Frenchman wasn’t going to close the gap but when Stalnov and King began messing around in the finale Rolland almost came back into the fold but King attacked and stormed away to a sizeable win. Behind, Simon Yates attacked to try and snatch the red jersey but it was Emmanuel Buchmann, who finished on the Brit’s wheel, who got closest to red, ending the day just seven seconds in arrears. Michal Kwiatkowski finished the day still in red but his advantage has been slashed and he looked far from convincing on the final climb, sucre to anyone keen to avoid a Sky Grand Slam this year. 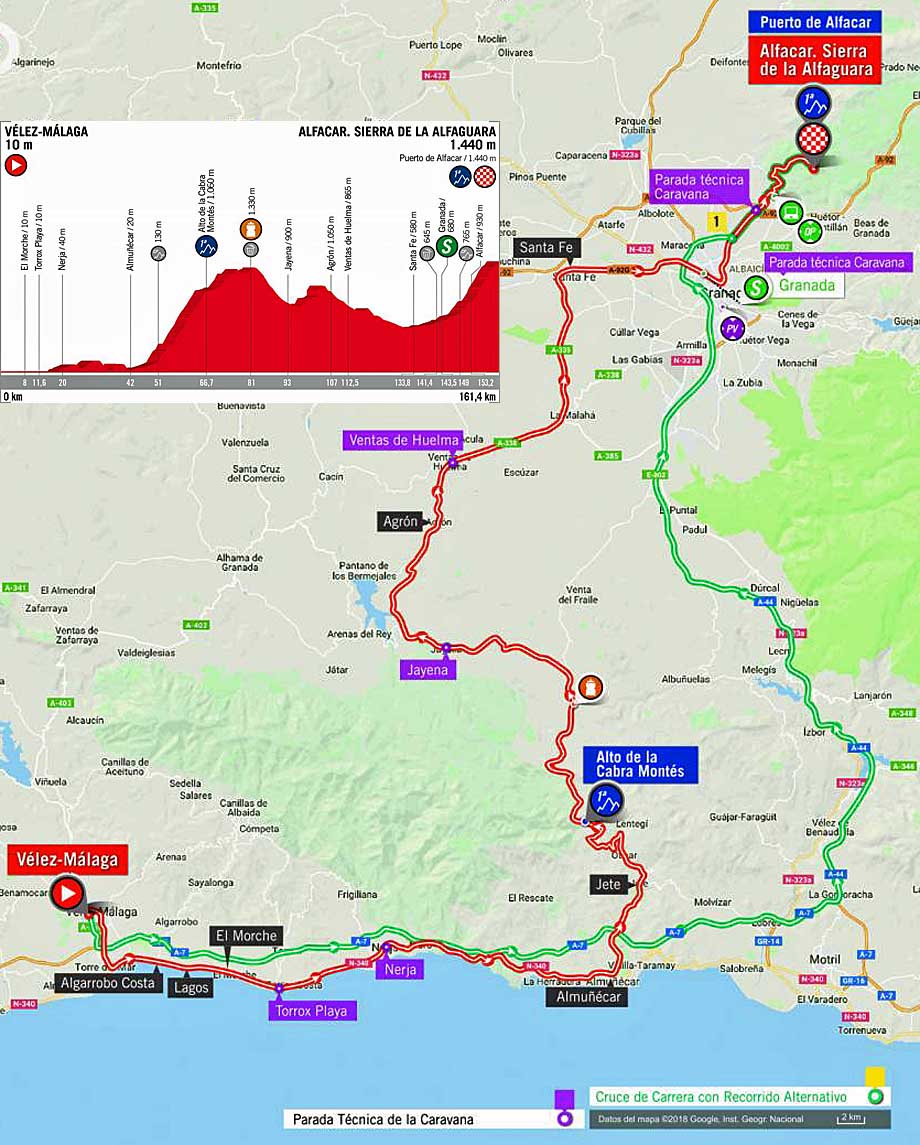 Route
We start on the coast to the east of Malaga but as the race turns inland we have the first of two first category climbs, the only two difficulties on the stage. This is being pegged as the first serious test of the Vuelta but it’s fair to say that with both climbs coming in under 6% average this isn’t going to be as brutal as some people may have expected. The first climb, Puerto de la Cabra, tops out at 67km but the climbing starts at the 50km mark. The first 4km average around 5%, with sections of 6.5%, but the following 2km are virtually flat before it kicks up again with 10km left to ride. The final 10km never go above 8% but they are very varied with some sections of 5% and some up to 7.5%. At the summit there’s a gradual descent with some kickers which take the riders to Grenada and the foot of the Sierra de la Alfaguara. The final climb is 12km long averaging 5.4%, it doesn’t sound too difficult but the average hides some elements of the climb. The first 3km gradually ease the riders into the finale before a flat section which gives way to another fairly simple section of 2km but then we hit the really serious part of the day, an 11% wall prior to a flat section and then a final 5km which includes some ramps of 8.5%. If this was just a 12km slog up a 5.4% gradient then you wouldn’t find many riders losing sleep over it but this climb is very uneven and it could bite anyone who is unprepared. 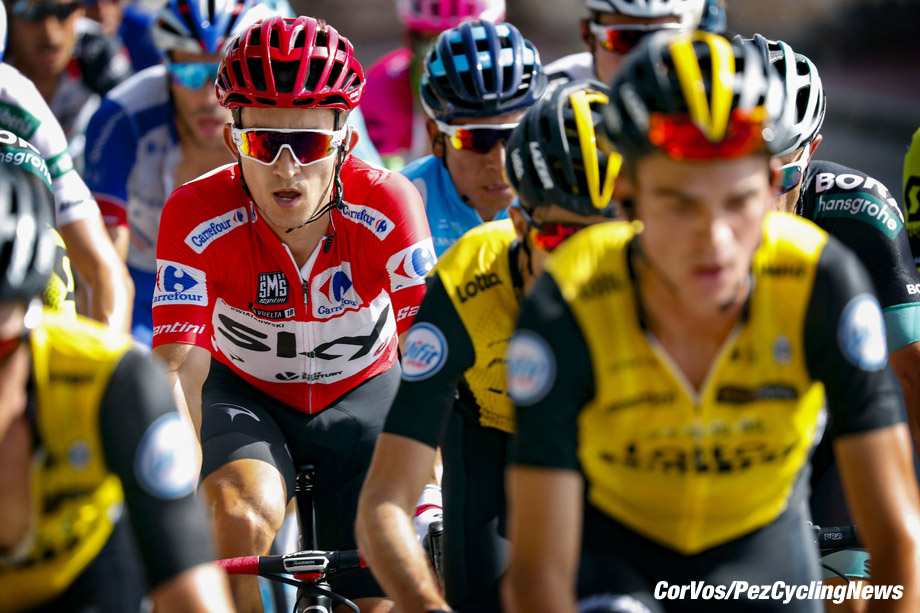 The day started easily for the peloton, but it didn’t finish that way

Coasting Along
The riders started with the sea on their right hand side and very quickly an eight man move went consisting of; Nikita Stalnov (Astana), Ben King (Dimension Data), Aritz Bagues (Euskadi Basque Country), Oscar Cabedo Carda (Burgos BH), Pierre Rolland (EF Education First-Drapac), Lars Boom (LottoNL-Jumbo), Luis Angel Mate (Cofidis), and Jelle Wallays (Lotto Soudal). They were quickly joined by Ben Gastauer (AG2R-La Mondiale) and the gap eased out ahead of a relaxed bunch and we had our break of the day. 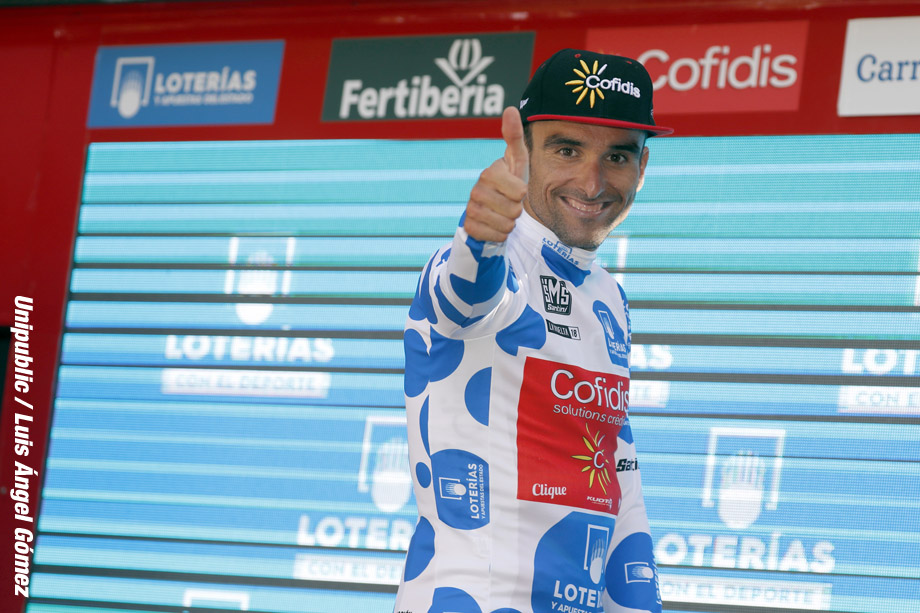 Mate is the wearer of the blue polka dot jersey, representing the king of the mountains and he was in search of more points on the two first category climbs on the stage. The Spaniard took the points at the summit of the first climb but he was under serious pressure from Gastauer. Sky were leading the peloton behind but their pace was very gradual and the gap was climbing out beyond the eight minute mark and it continued to extend beyond nine minutes as the long descent started. 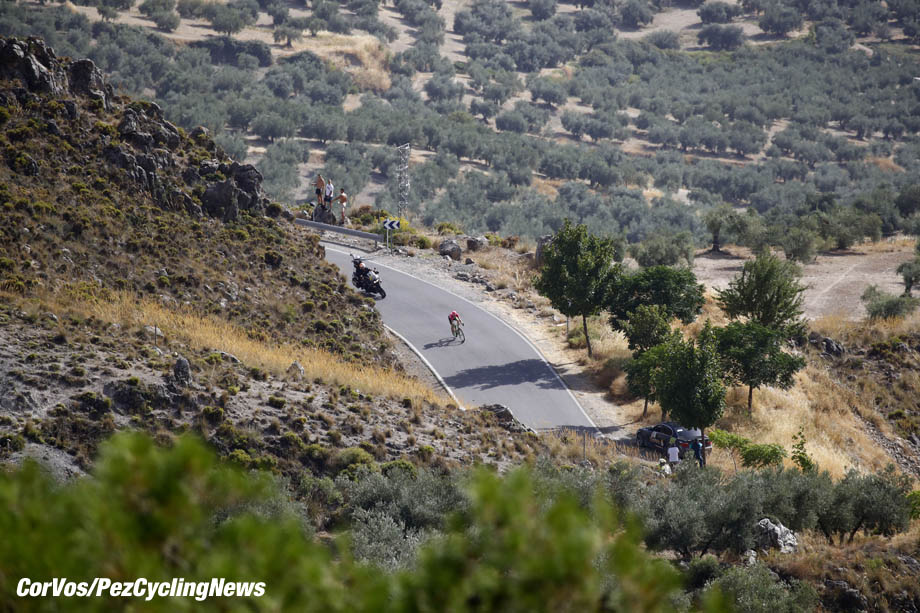 Another hot day in the hills

The countryside was baked but the racing itself hadn’t yet set alight, the peloton were happy to see the gap stretch towards the ten minute mark and with 42km left to ride and the final climb it was likely that the winner was going to come from the leading group and the red jersey might change hands if the peloton continued their lethargic tour to the finish line. 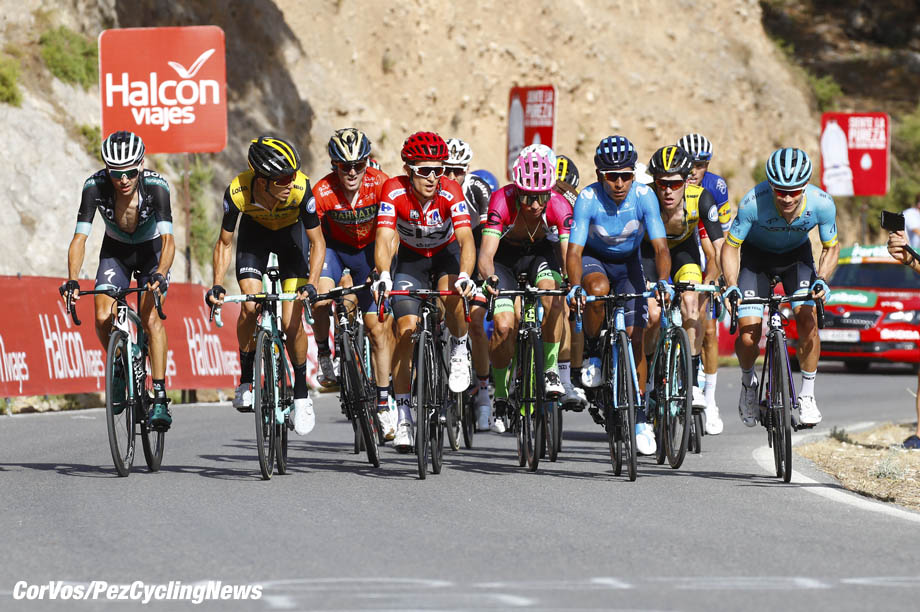 There were not many GC men left in the finalé 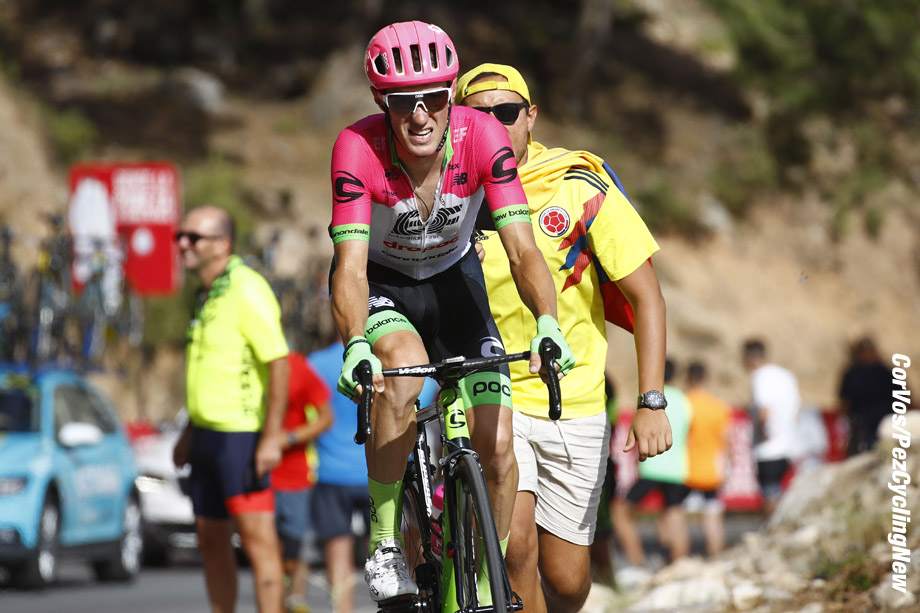 Out of the Desert
It was clear that with 20km left and the break still carrying a lead of more than nine minutes, this was going to be a victory for the break. The two questions remaining were who would win and would Ben King finish 4.33 ahead of Michal Kwiatkowski (Sky) to snatch away the red jersey? Before the final climb the break had the sprint in Grenada to negotiate, Wallays started his sprint but he was passed by King and the duo kept the effort going through the city of Grenada and towards the final climb. Their lead crept out to 20 seconds but they were quickly joined by Stalnov as the early parts of the climb began to bite. The peloton were also biting though and the gap to the three leaders was now near the eight minute mark and falling fast. Ben King was by far the best placed rider on GC in the leading trio but his lead was just over three minutes with the entire final climb to come. As the climb kicked up Wallays was sent packing almost immediately leaving just Stalnov and King in the lead. Mate was leading the chase with Rolland and Gastauer but they were almost one minute back. Before the situation got terminal, Rolland hit for home and was quickly on the tail of the floundering Wallays. Behind, the peloton were now just over seven minutes back but they had yet to hit the climb proper. 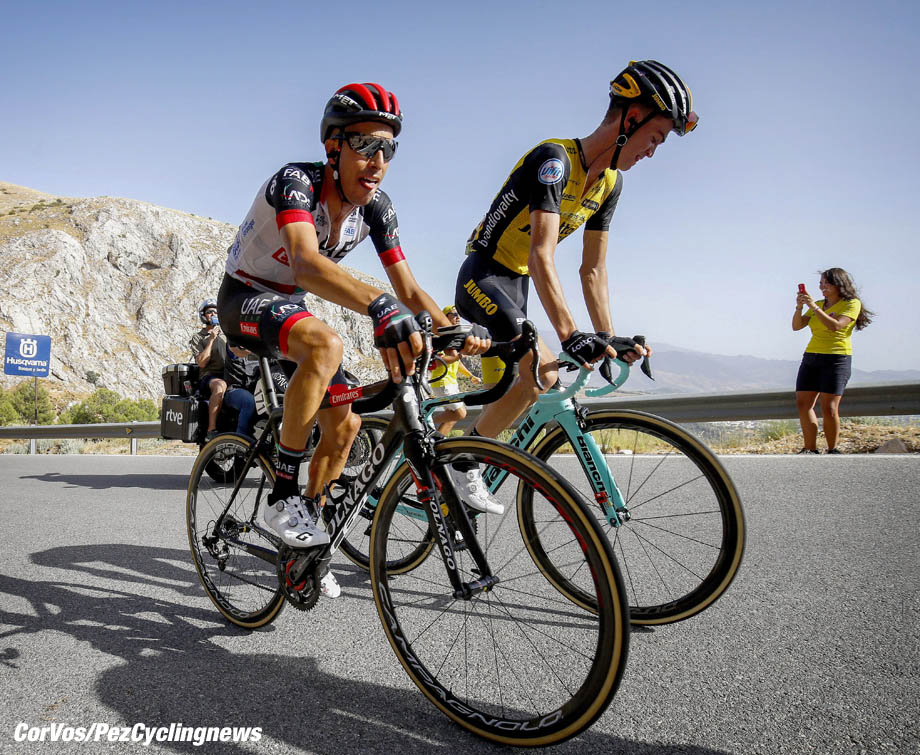 Sky had left the pace making and LottoNL-Jumbo were now on the front and destroying the time gap, it was 6:41 and the leading duo still had 8km to go. The leaders were about to hit the 11% wall but their gap was now just 27 seconds as Rolland continued his pursuit. Wallays had re-found some form but Rolland left him in his wake as they ground through the town at around the midpoint of the climb. Stalnov and King were side by side but Rolland was storming into contention as he kept closing towards the 20 second mark. Ben King’s hopes of the red jersey were fading, he had just over a minute with 6km still left to ride on the climb. LottoNL-Jumbo were putting paid to his chances but also to Vincenzo Nibali’s (Bahrain-Merida) who was sent out the back on the early stages. The peloton was still fairly sizable but it was all in one line as the pace quickened. As the peloton hit the wall everyone who was hanging on just went pop and LottoNL-Jumbo were now leading just over twenty riders, Kwiatkowski was still riding strongly but he was by himself. 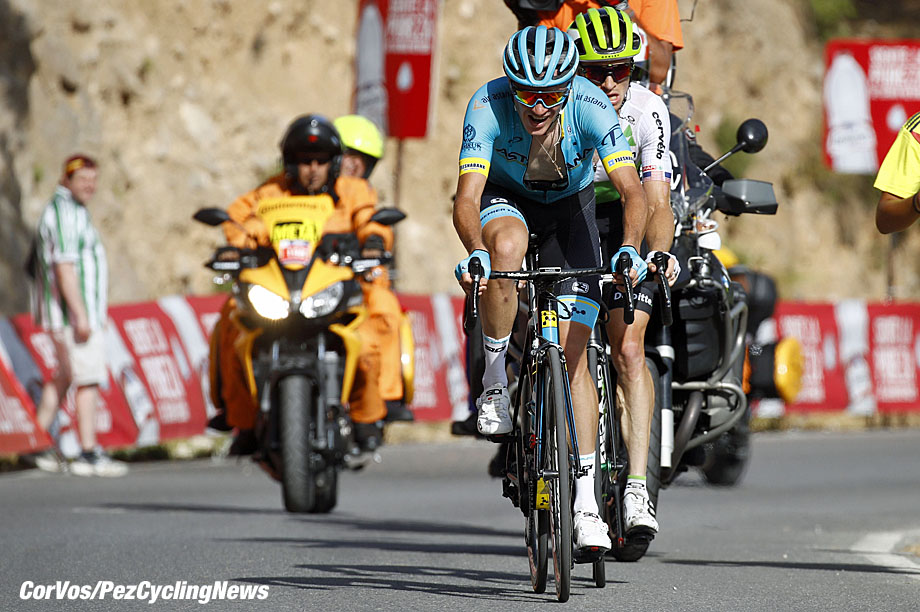 Stalnov and King ready to fight of the stage

Rolland had flirted with the twenty second mark but with 4km left he was now under it, just 17 seconds in arrears. Rolland was getting stronger as this climb continued. The pace making at the head of the peloton had ended the chances of Bauke Mollema (Trek-Segafredo) and Ilnur Zakarin (Katusha-Alpecin) who had just gone pop and were fading fast. It had also ended the red jersey hopes of King who’s lead was just 3 seconds with 3km to go. Steven Kruijswijk (LottoNL-Jumbo) had been left with just a single helper, Sepp Kuss, but as the gradient eased two more helpers had remerged to lean into the work. As the climb kicked on again, the two helpers disappeared but the GC group was losing members rapidly. For the first time it lost them out the front though as Simon Yates (Mitchelton-Scott) went clear with 2km to go. Alejandro Valverde (Movistar) put in a turn but he then settled into a pace making duty for Nairo Quintana. 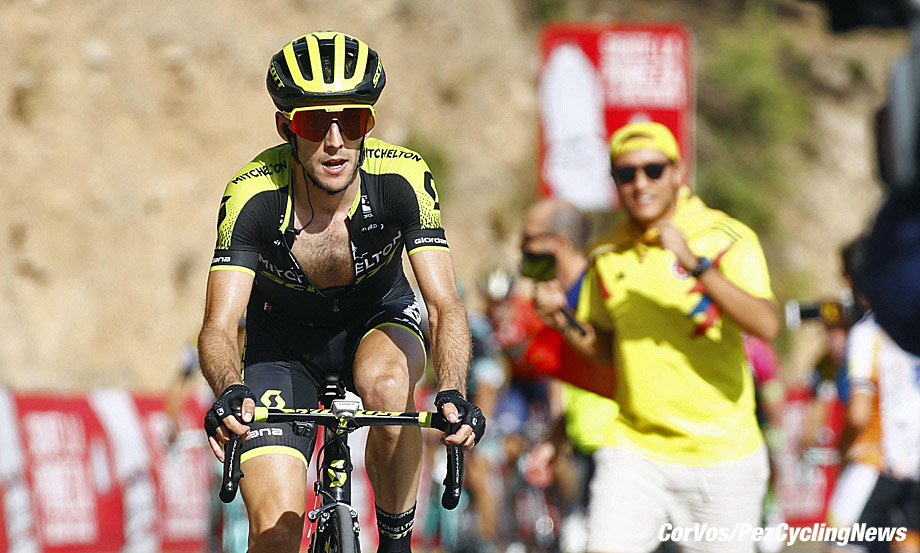 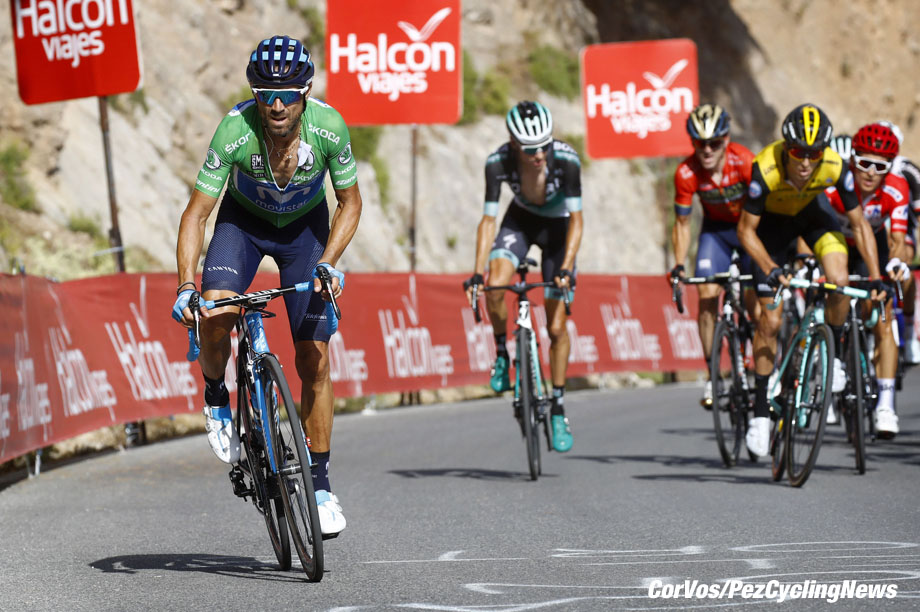 Valverde put in a few late attacks, but dropped to 4th on GC

We had almost forgotten about the leaders but Stalnov led King into the final kilometre, Rolland had tried to close the gap but it looked like he wasn’t going to get close enough, but Stalnov and King were messing around and Rolland was now within view. The Frenchman just couldn’t quite make the catch and King launched a vicious attack to leave Stalnov in his wake with Rolland taking up the final podium place. 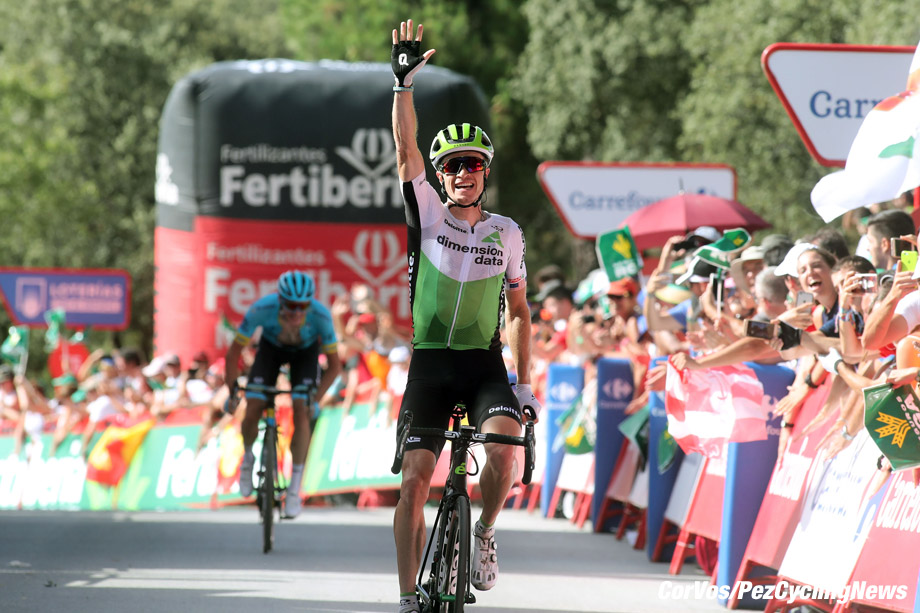 Stage and so nearly the red jersey for King

King wasn’t going to get the red jersey but Simon Yates might, the Brit was flying and he was going to be the first of the GC contenders to come home, he finished just 2.49 down with Emmanuel Buchmann (Bora-Hansgrohe) almost catching him on the line after a strong finish. Nairo Quintana was the next over the line but he was just ahead of the Kwiatkowski group. The Pole keeps his red jersey but he wasn’t convincing and his lead is now just seven seconds back to Buchmann and ten back to Simon Yates. 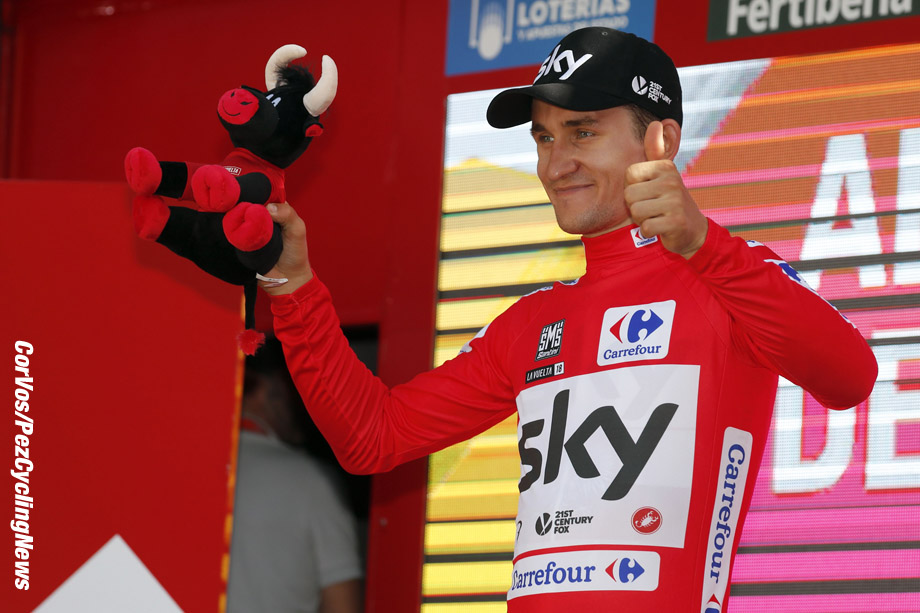 Kwiatkowski another day in red