Vuelta Stage Report: Primoz Roglič (Jumbo-Visma) won the opening stage of the Vuelta a España. The Jumbo-Visma rider escaped on the descent of the Alto de Arrate in sight of the finish, and stayed ahead of what was left of the peloton. Richard Carapaz (INEOS Grenadiers) was second. Tom Dumoulin and Chris Froome both had to let go of the front runners on the final climb and lost time on the first day. 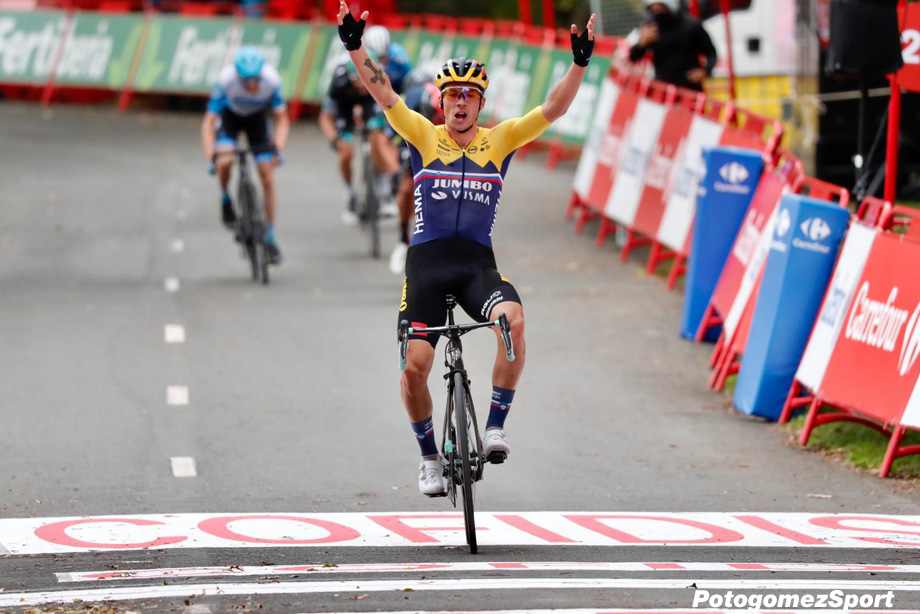 After a minute silence for the victims of covid-19, the peloton left Irún for the last Grand Tour of the season. 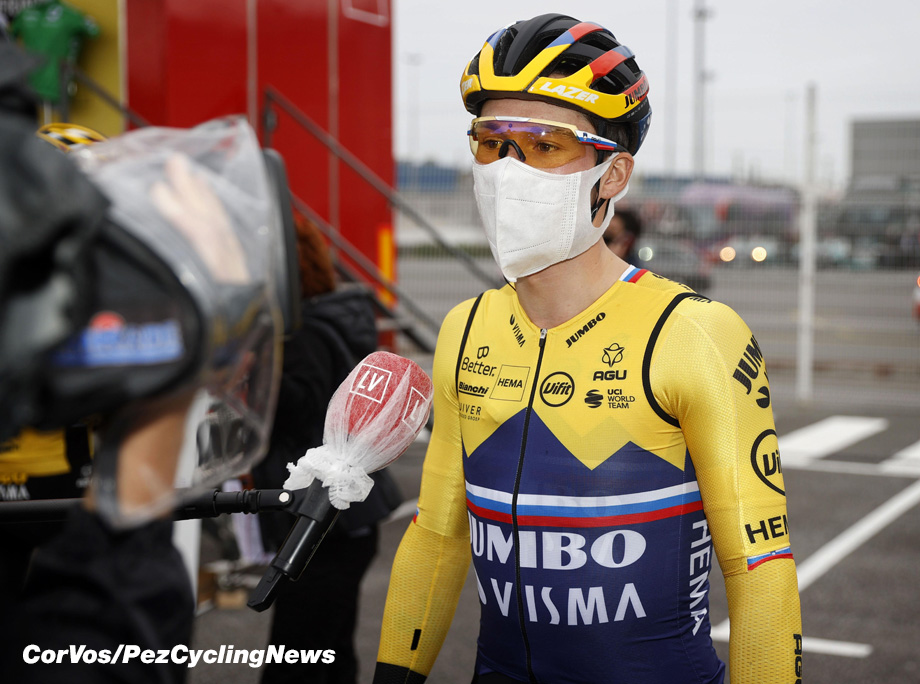 2019 Vuelta a España winner – Primoz Roglič at the start

Stage 1. Irun – Arrate.Eibar – 173 Kilometres
This atypical 75th edition of La Vuelta begins on what originally was its 4th stage, a hilly stage in the heart of the Basque Country. The peloton will start from Irún, near the French border, and ride for almost 90 kilometres until reaching Legazpi, from which the real climbing will begin. Three category-3 climbs will precede the decisive, cat-1 Alto de Arrate, a holy climb for cycling – not only because of the sanctuary there is 2,5 kilometres from its top, where the stage’s finish line will be placed, but also because how often the peloton visits it. A yearly feature in the Tour of the Basque Country since its merger with the Euskal Bizikleta,

Fernando Escartín’s Comment: “The first stage and the first mountain contact for the peloton in La Vuelta 20. The final 25 km feature the succession of the Karabieta Mountain Pass (2nd category) and the Alto de Arrate (2nd category). Two climbs that, though not excessively difficult, could make early differences in the general classification.” 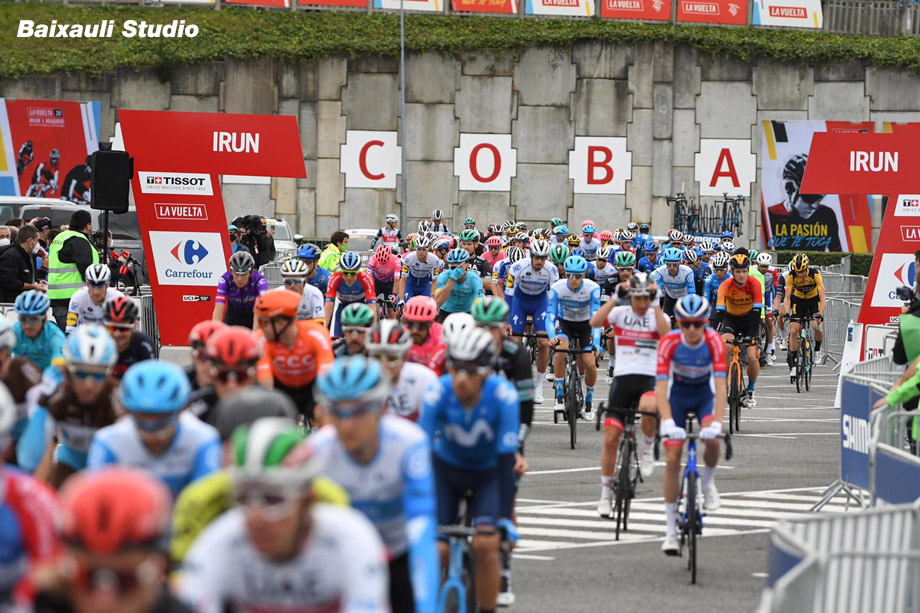 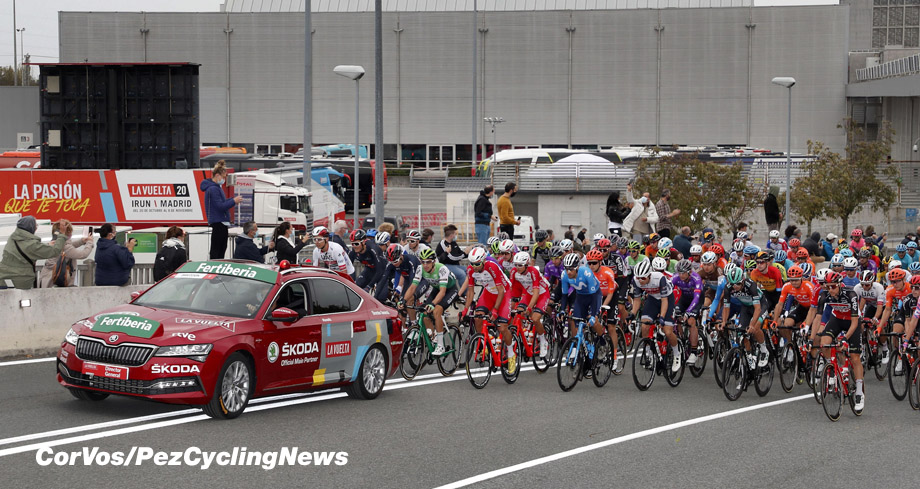 Jumbo-Visma and Movistar set the pace at the front of the peloton and did not let the five at the front get too far away. At 95 kilometres from the finish, Daniel Felipe Martínez crashed, but the Colombian was able to continue and was taken back into the peloton by his teammates. Mathias Frank and Ilan Van Wilder were less lucky. Frank had to leave the Vuelta, while debutant Van Wilder had to retire due to physical problems. Alexandre Geniez also gave up later in the stage, so AG2-La Mondiale has only six riders left. 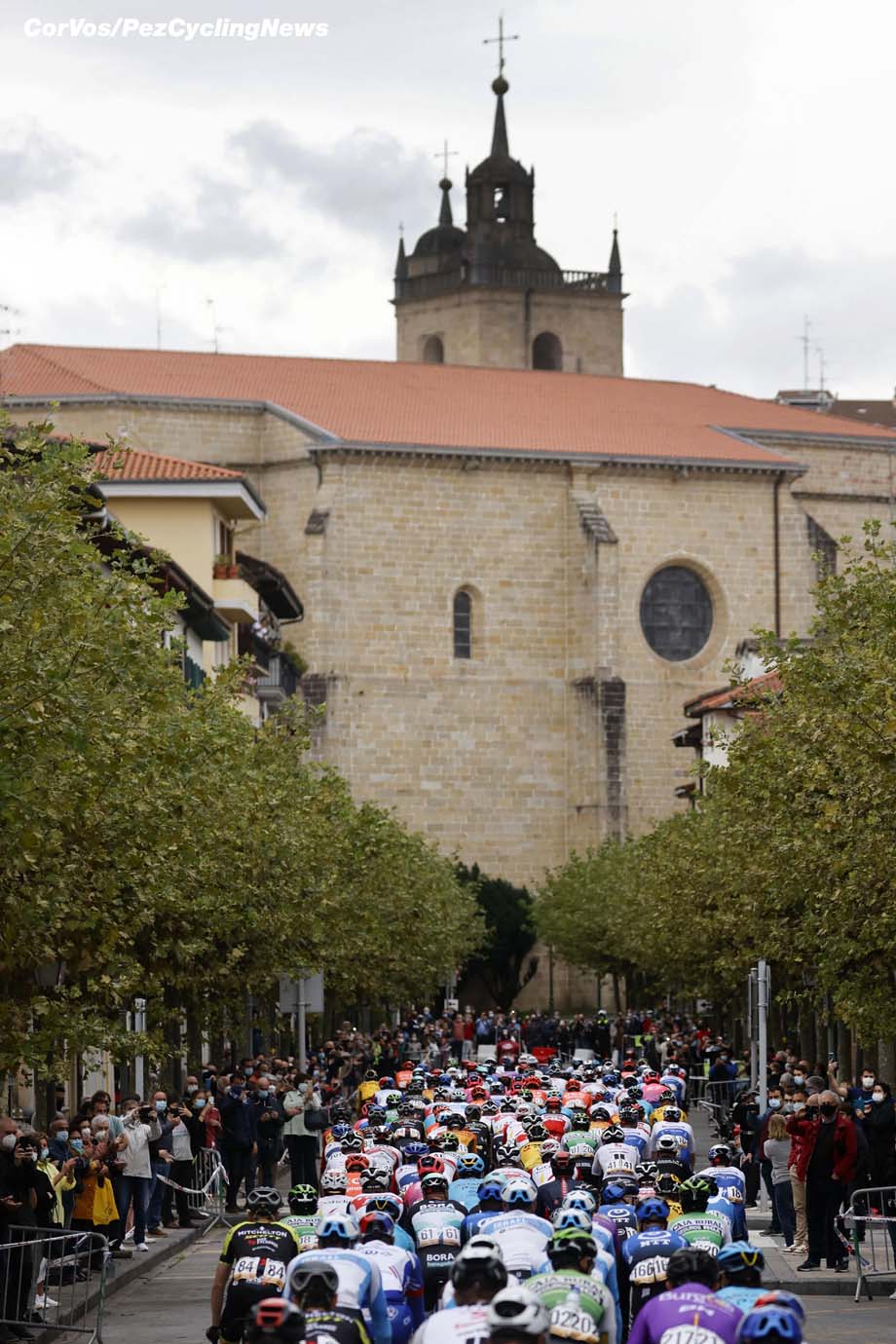 On the Alto de Udana, Jauregui took all the KOM points ahead of Bol and Sütterlin. On the second climb of the day, the Frenchman was again the first to the top. The co-operation in the leading group came to an end when Cavagna thought it was not fast enough. The Frenchman was soon pulled back by his fellow escapees, who were being chased down by the peloton. The early break was caught one by one and at 25 kilometres out, the break was over. 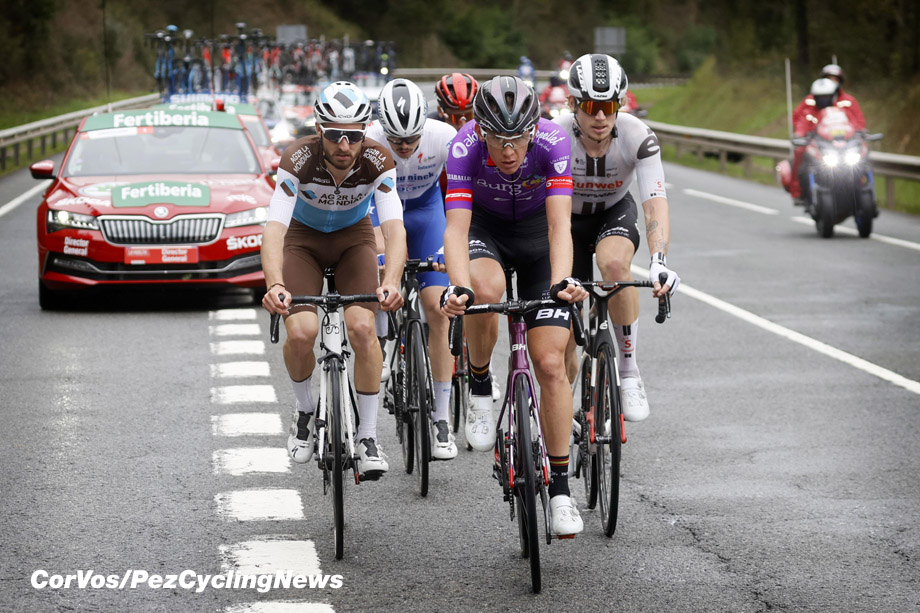 The break was doomed 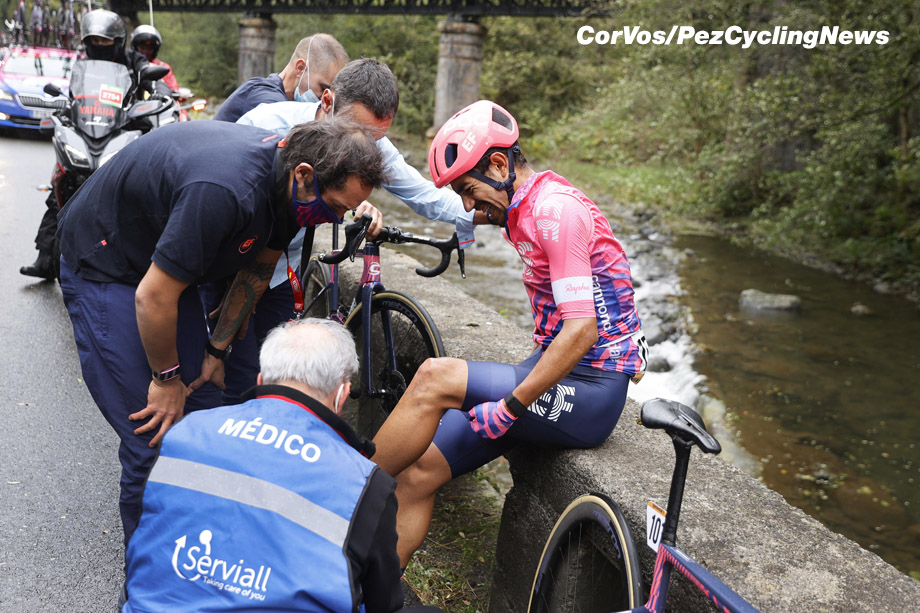 During the climb of the Alto de Elgata, EF Pro Cycling was again unlucky when Michael Woods crashed. On the penultimate climb of the day, Chris Froome and Thibaut Pinot had to let go of the peloton early on. Froome was able to return, but was in trouble again when his teammates increased the pace. 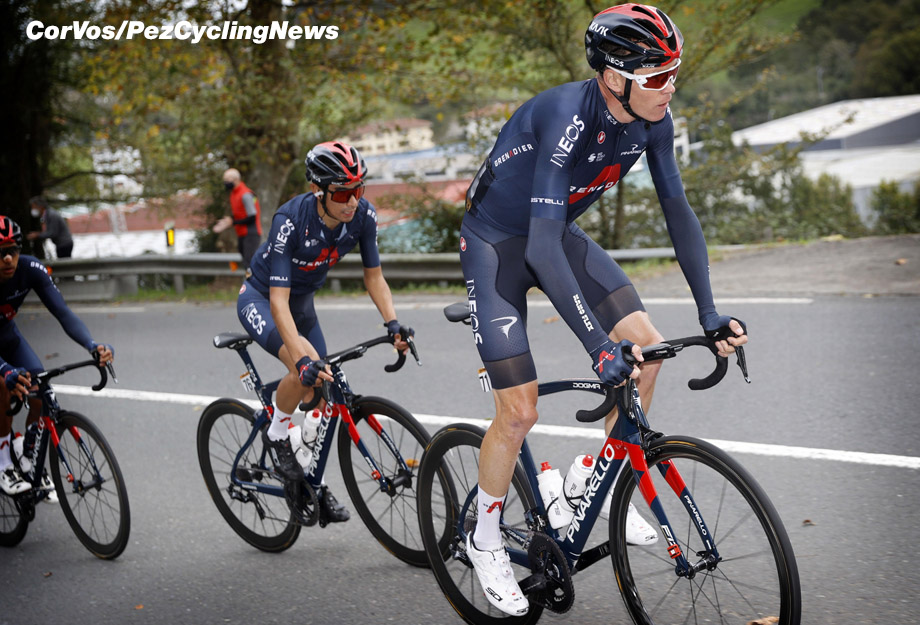 Chris Froome was in trouble

On the Alto de Arrate, the INEOS Grenadiers kept setting the pace. At the back of the peloton Vlasov, Martinez and Poels, among others, dropped off. Sepp Kuss put in a strong effort 4.5 kilometres before the finish. It was too fast for Tom Dumoulin and Alejandro Valverde. 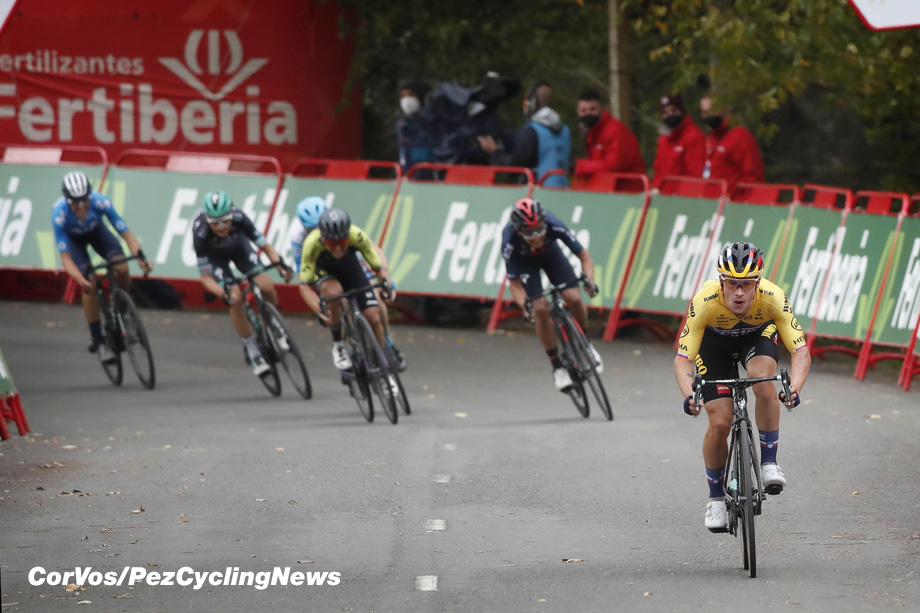 Roglič had the jump

Nine riders remained at the front. Jumbo-Visma was well represented with three men (Kuss, Roglic and Bennett). A strong Kuss continued to set the pace, at the expense of teammate Bennett. On the descent, Carthy tried to escape, but his attempt was unsuccessful. Roglič then accelerated at the 1 kilometre banner. The Slovenian took enough lead to stay away for the opening stage and first leaders jersey. Carapaz was second. 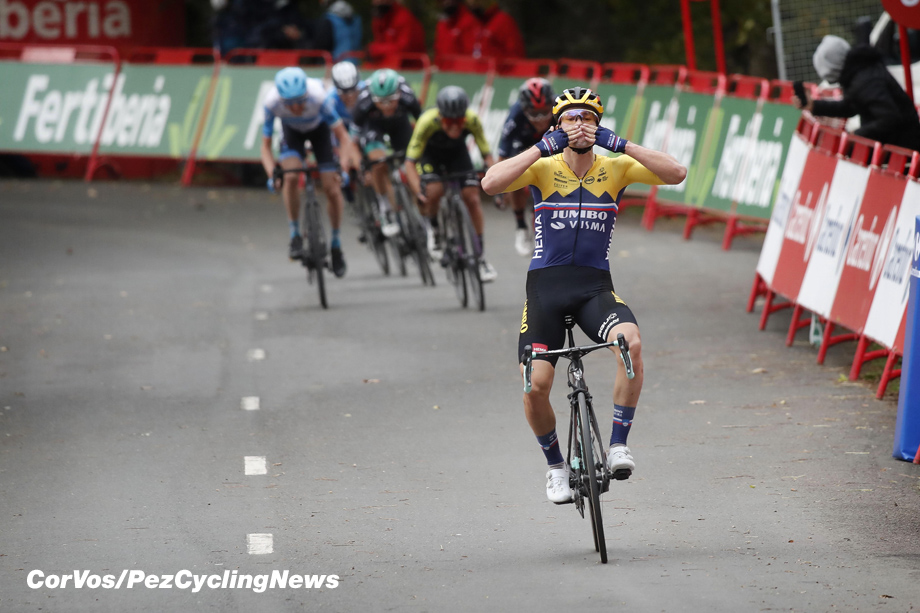 Could Roglič lead all the way to Madrid?

Roglič has dealt a big blow to his competitors with his victory. Teammate Tom Dumoulin is already 1 minute behind. Martinez and Vlasov are at more than 4 minutes and seem to have to forget their classification ambitions. Chris Froome and Thibaut Pinot also face a significant loss after one day.

Stage winner and overall leader, Primož Roglič (Jumbo-Visma): “A victory is always nice. It was a difficult stage and on the last climb we really went up full speed. We were all suffering. The team was very strong again today. We also want to try to keep several guys as high as possible in the rankings. It is a special Vuelta. We do not know how long it will last and how the course will unfold. It’s just a matter of racing as well as possible. We really look at it day by day. Three weeks is and remains a long period. I will enjoy it now, tomorrow is a new day.”

# Keep it PEZ all the way to Madrid for all the stage reports, result, video and photos. #