Vuelta Stage Report: The final sprint was far from flat, and in the last metres Primoz Roglič (Jumbo-Visma) shot out from the pack for another stage win. The Slovenian was by far the most powerful rider to win by lengths. Ten seconds bonus and his winning gap and Roglič took the red jersey from Richard Carapaz (INEOS Grenadiers). Both are on the same time. 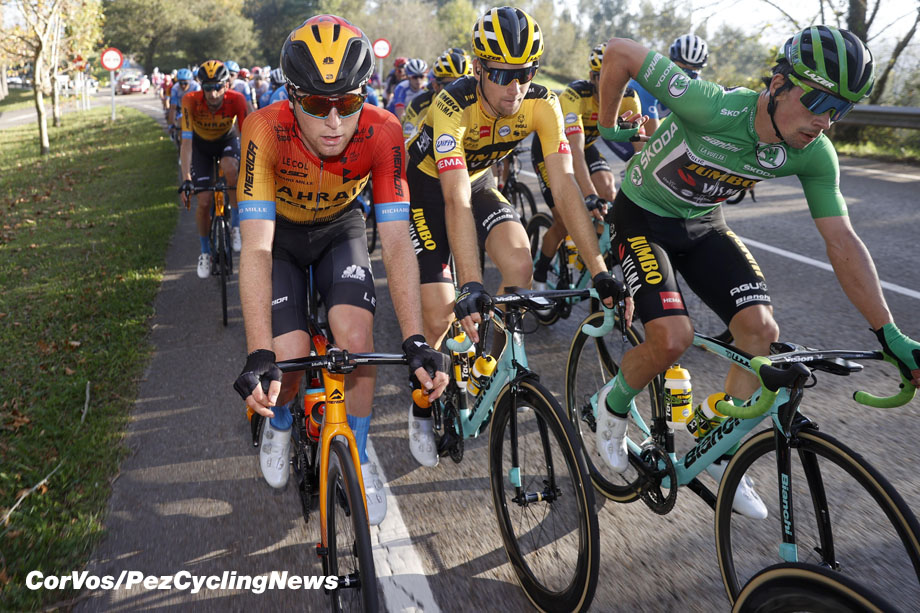 All for the final for Roglič

The tenth stage of the Vuelta a España was won by Primož Roglič. The leader of Jumbo-Visma was, after a ride of 185 kilometres, the first to cross the uphill finish in Suances. 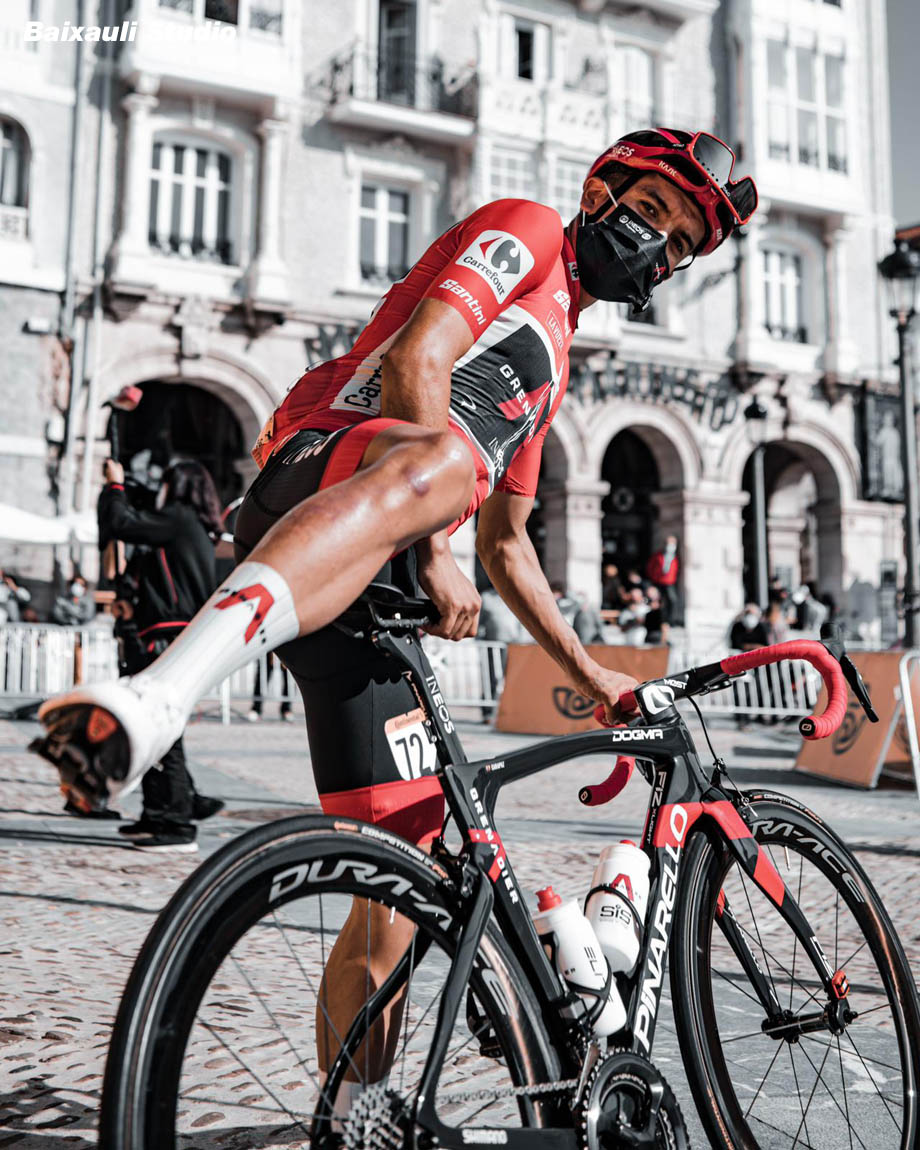 Stage 10. Castro Urdiales > Suances – 185km
Stage 10 only features one Cat-3 climb but the road is always going up and down on the seaside all the way to an uphill finish in Suances that should favour the punchiest riders in the bunch. The last kilometre features an average gradient of 4.5%.

Fernando Escartín’s Comment: “Flat stage with a 3rd category climb that will add some excitement to the day. The peloton will ride through a spectacular area, bordering the Cantabrian coast. Strong riders are expected to break away so the sprinter’s team won’t be able to easily control the final. The finish-line has a final slope of less than 2km with a 5% inclination that will add some excitement to the end of the stage.” 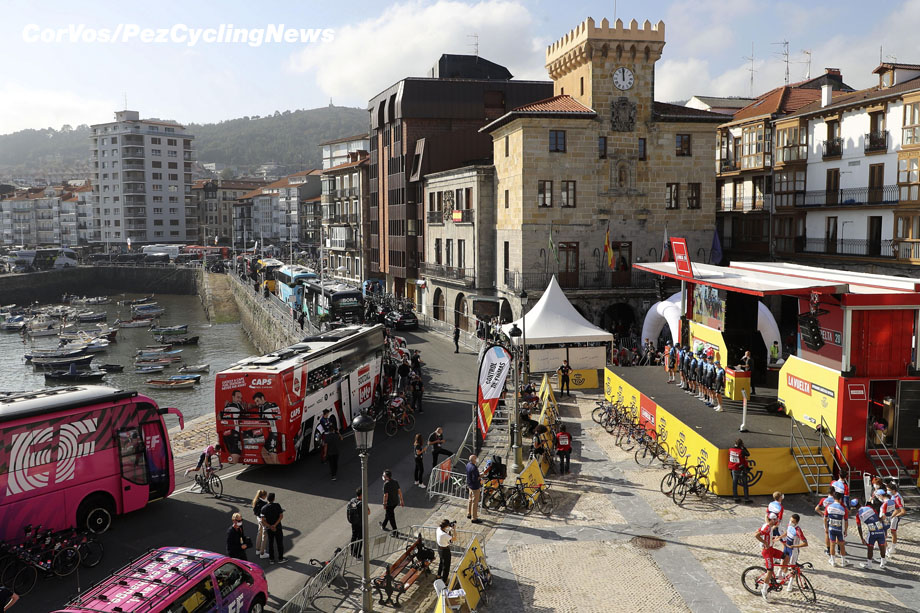 The sign-on at the port of Castro Urdiales

After a battle for the break of the day, a leading group of four riders finally got away: Pim Ligthart (Total Direct Energie), Alex Molenaar (Burgos-BH), Brent Van Moer (Lotto Soudal) and Jonathan Lastra (Caja Rural-Seguros RGA). Initially Michal Paluta (CCC) was also in the leading group, but he lost the contact due to a puncture. He tried to come back, but that attempt failed and so he was caught by the peloton. No team wanted to chase, so the leading group had a maximum lead of more than 12 minutes. 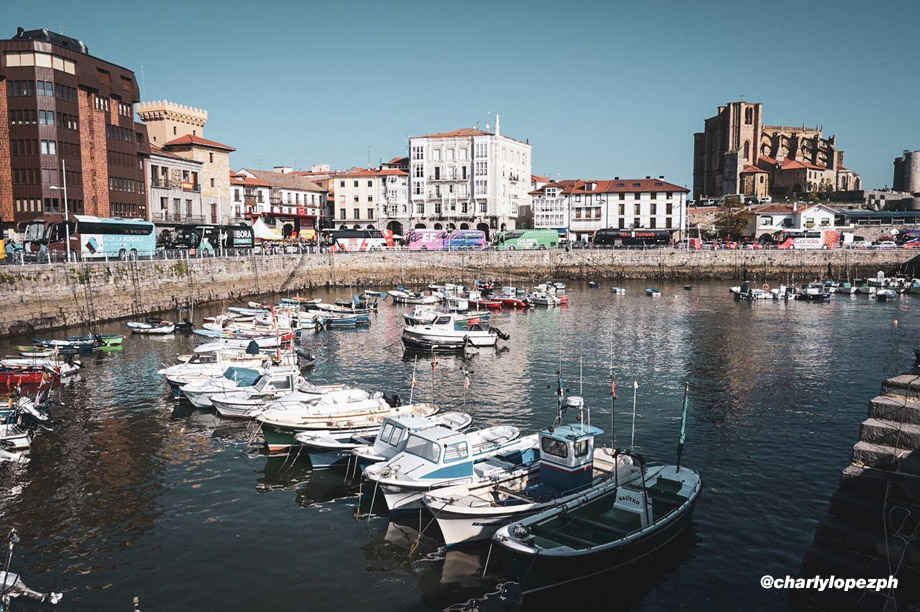 The team busses could come right up to the start 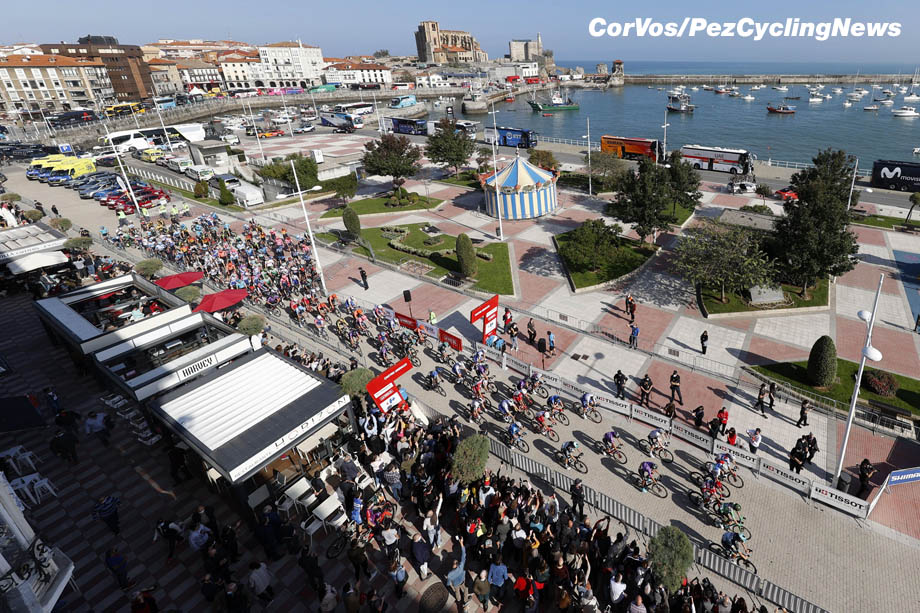 Deceuninck – Quick-Step, Mitchelton-Scott and Movistar thought that was a bit much, so they started the chase at 120 kilometres from the finish. Astana also lent a hand in the chase work and the lead of the break dropped like a stone. 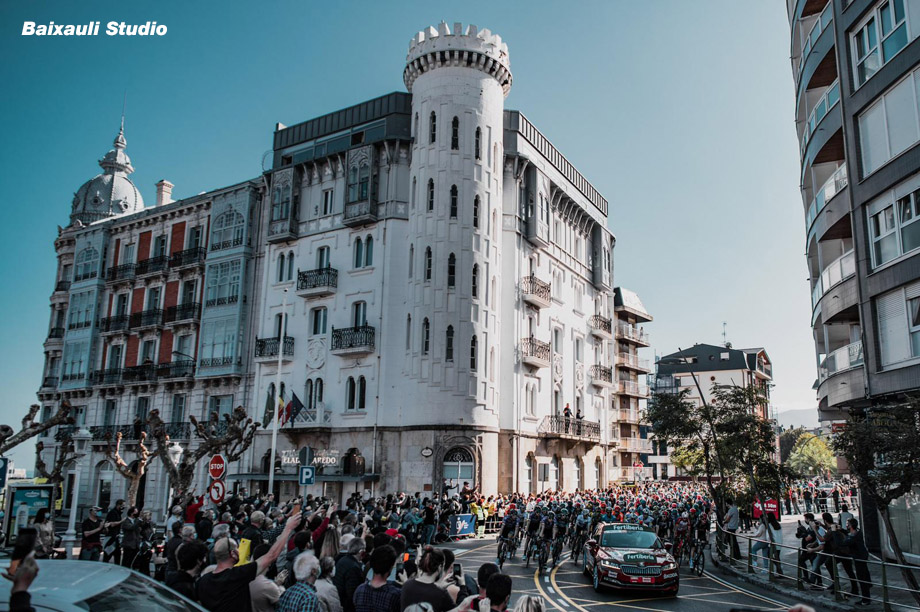 On the only climb of the day, 60 kilometres from the finish, the difference was less than 4 minutes. Van Moer took the mountain points on the Alto de San Cipriano and shortly afterwards also the intermediate sprint. 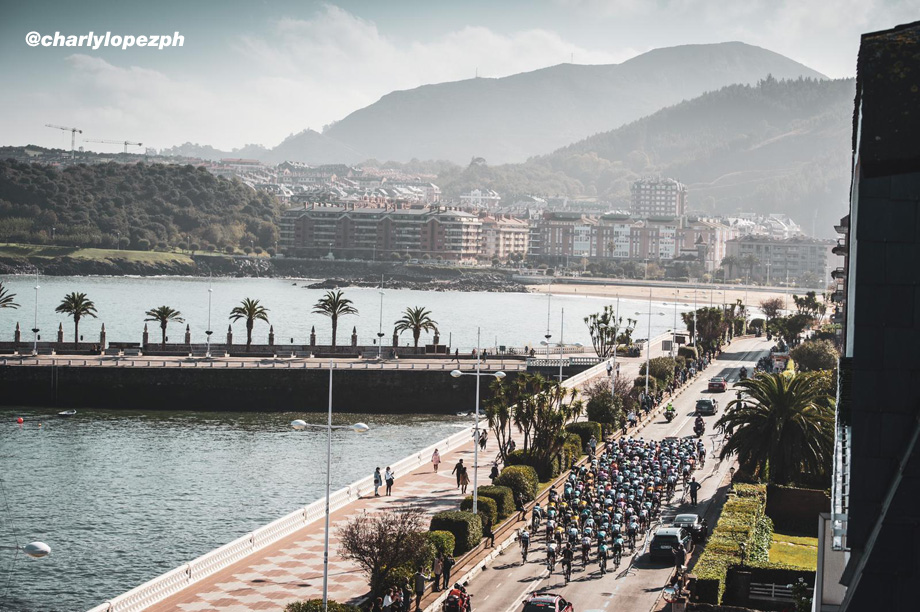 The peloton headed north out of town

The break lifted the speed after the climb on the undulating course along the Cantabrian coast, but it was not enough to stay ahead of the peloton. For Sam Bennett it was too fast, the sprinter was in trouble early on and he was dropped 25 kilometres from the finish. The break ended not much later, 16 kilometres before the finish in Suances. 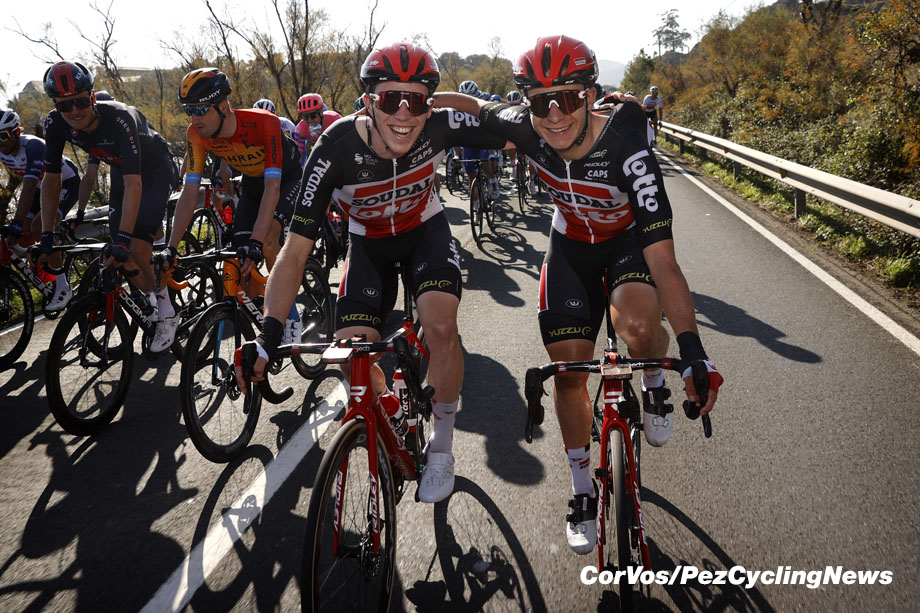 The peloton was not interested in the chase early on. Gerben Thijssen and Stan Dewulf enjoyed the start 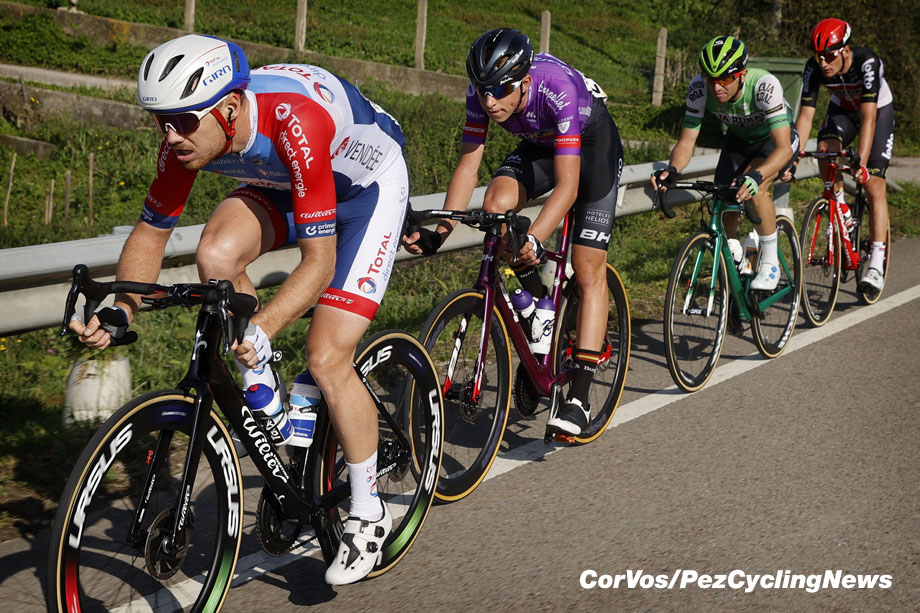 Willie Smit made a big effort 10 kilometres from the finish, but his attack did not last long. When he was caught, Rémi Cavagna and Ivo Oliveira attacked. They made a gap in a technical section of the final and forced the peloton to chase. 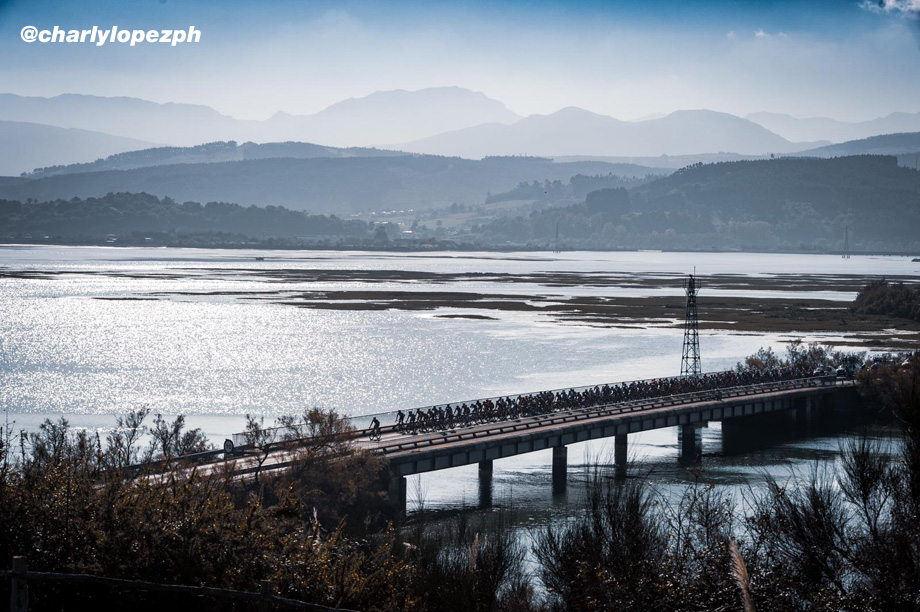 The course followed the coast 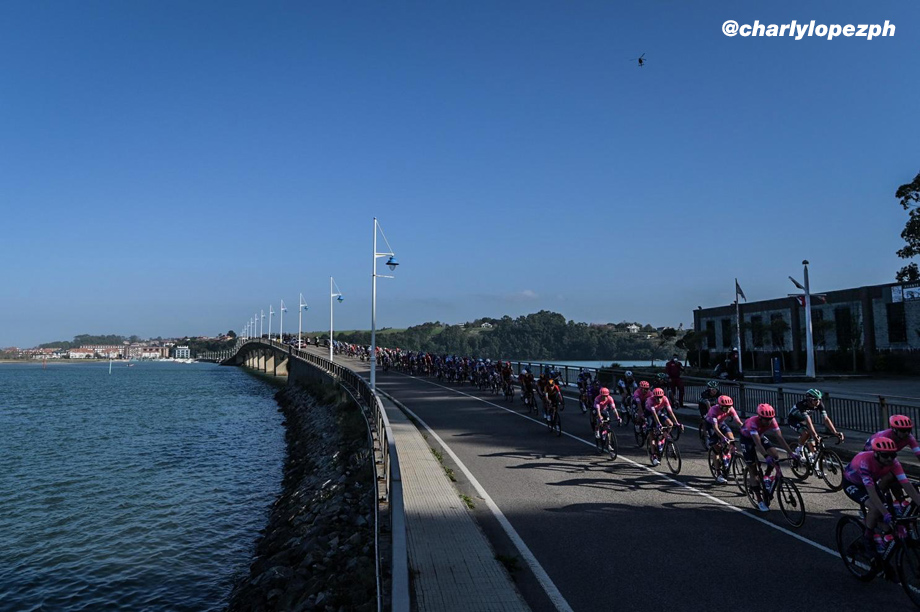 Cantabria is a very nice part of north Spain

Cavagna’s pace was too much for his Portuguese companion. On one of the little hills towards Suances, he left the UAE Team Emirates rider behind, and so the Frenchman raced into the last 5 kilometres solo. At 3.5 kilometres, Cavagna was caught, causing a full peloton to race towards the finish line. 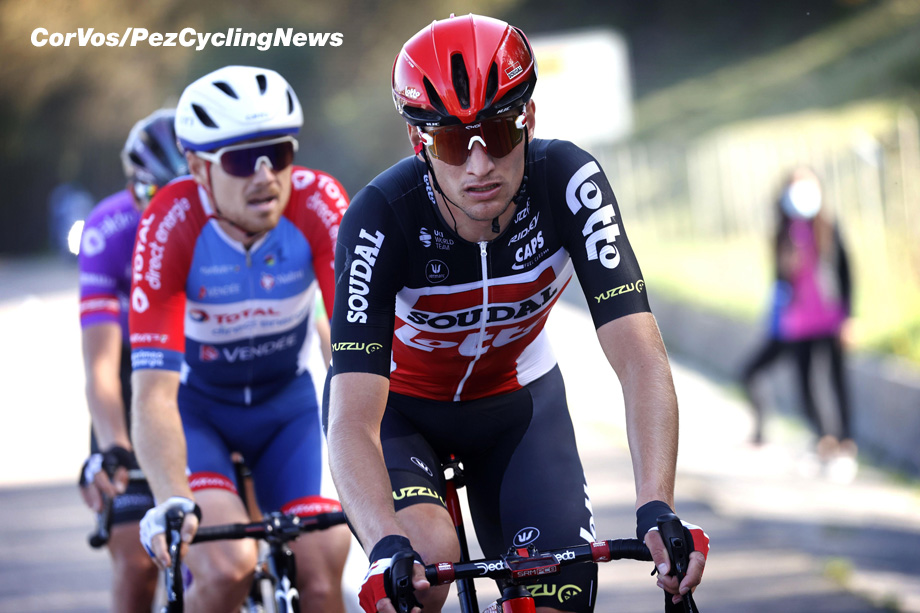 Green jersey Primož Roglič was dangerously near the front with 2 kilometres to go. The uphill sprint got underway under the red flag of the final kilometre. A first serious jump came from Guillaume Martin, who made a small gap on leader Richard Carapaz. However, the Ecuadorian lost his place among the leaders as Roglič win the stage with an excellently timed sprint. 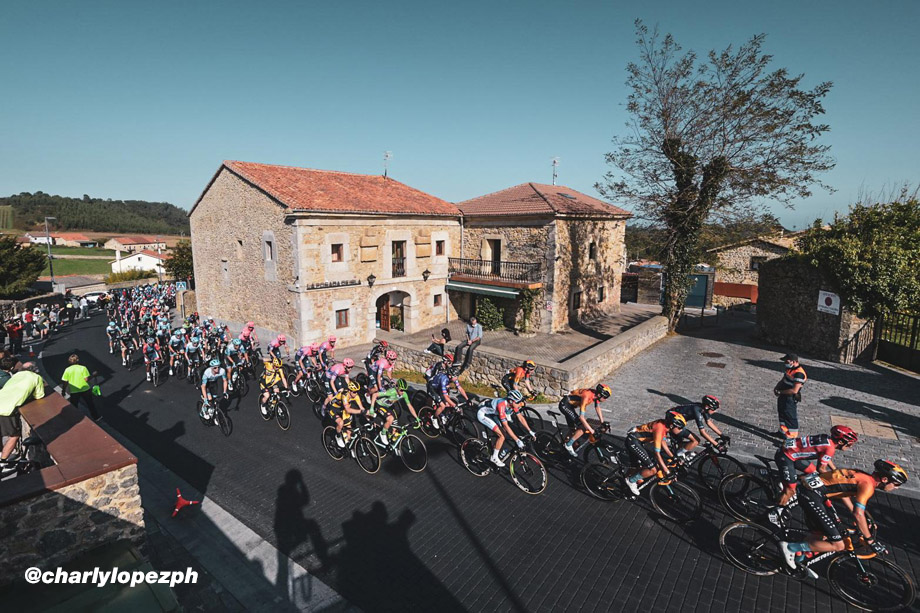 The Slovenian made a clear gap with his closest pursuers; Felix Großschartner second, Andrea Bagioli third, also took ten bonus seconds due to the stage victory. 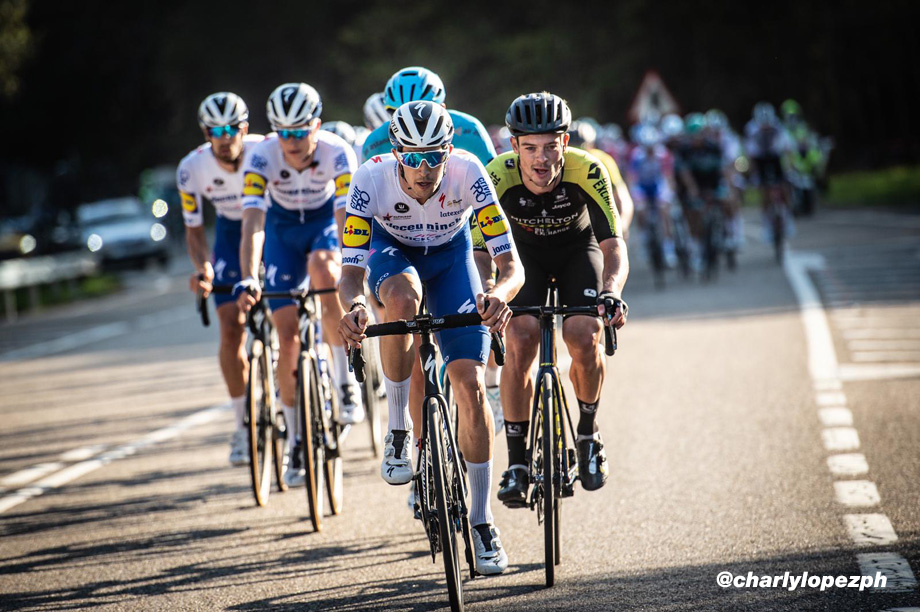 At first, the group including Carapaz was given the same time as stage winner Roglič, which saved Carapaz’s overall lead by 3 seconds. 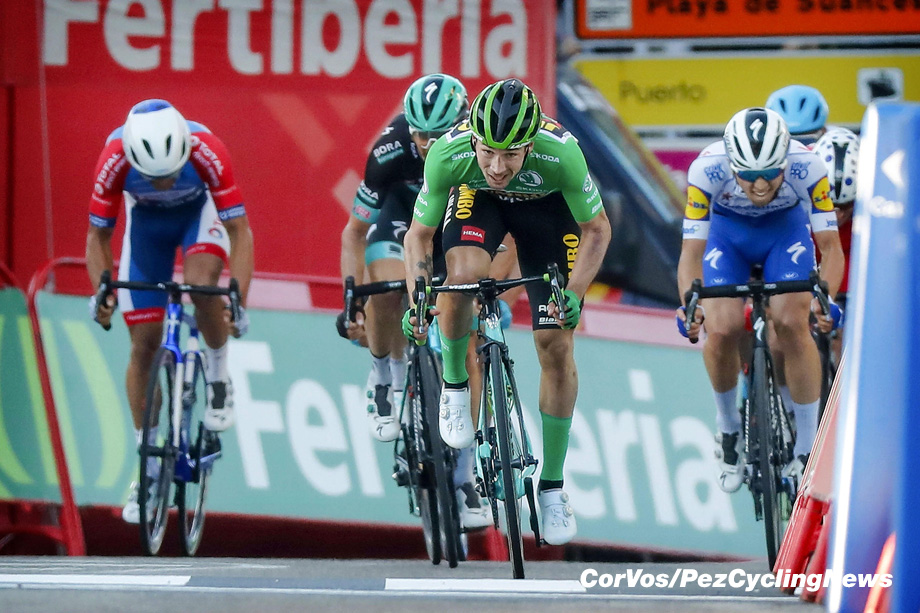 No one could compete with the Slovenian champion 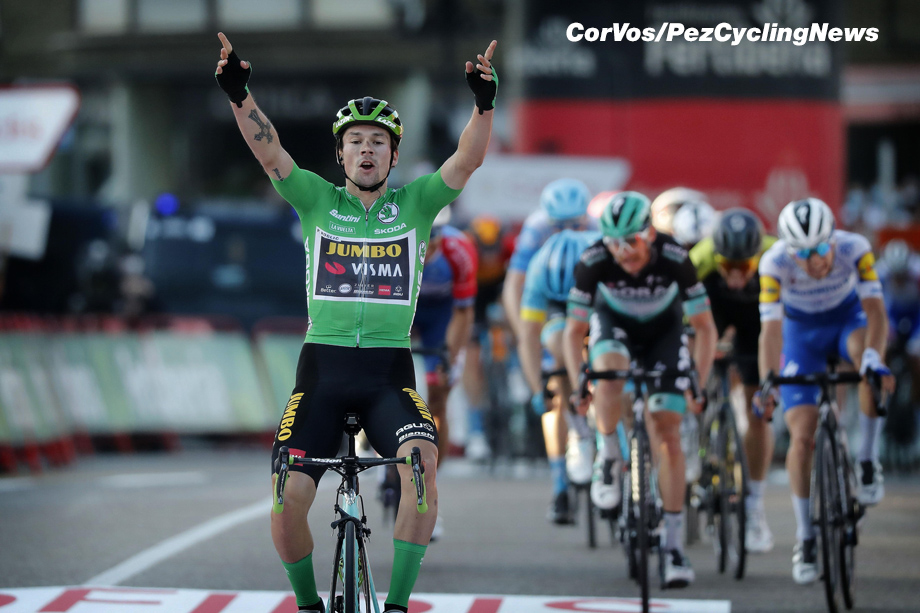 Roglič took lengths out of everyone in the uphill sprint

After more discussion by the judges, a gap of 3 seconds was given after 8th place, meaning Carapaz and Roglič were on the same time overall. Carapaz lost his red jersey to Roglič on the count-back. The Slovenian was presented the red leader’s jersey on the podium. 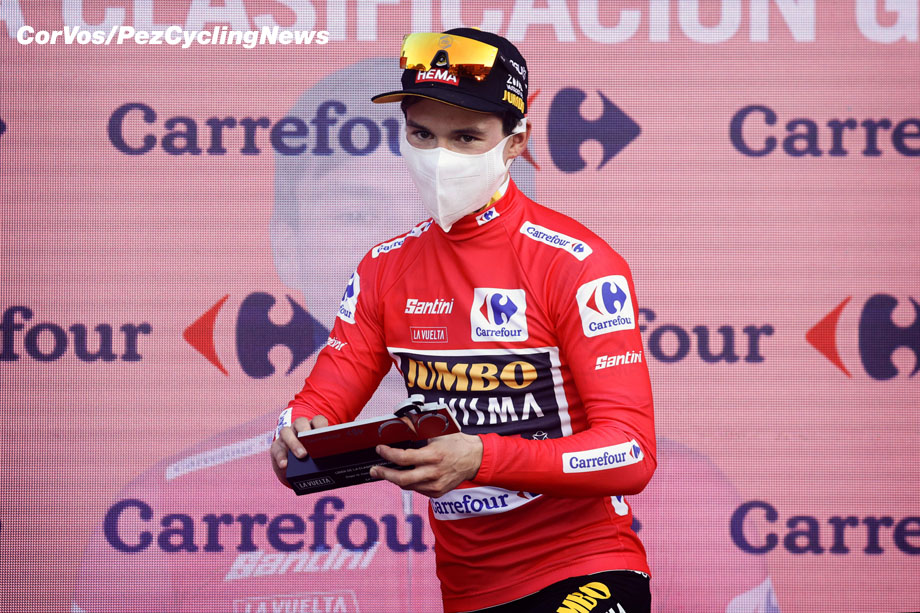 Roglič back in red

Satge winner and overall leader, Primoz Roglič (Jumbo-Visma): “I’m super happy. It’s never easy but I had the legs and this is really really nice. I’m one year older [after turning 31 years old on Thursday] so I’m stronger. It’s like wine, the older the better. I’m back in red. It doesn’t really change things for my team. We need to keep the momentum going. We have a week-end in the mountains. It will be fun to watch and we’ll do our best.”