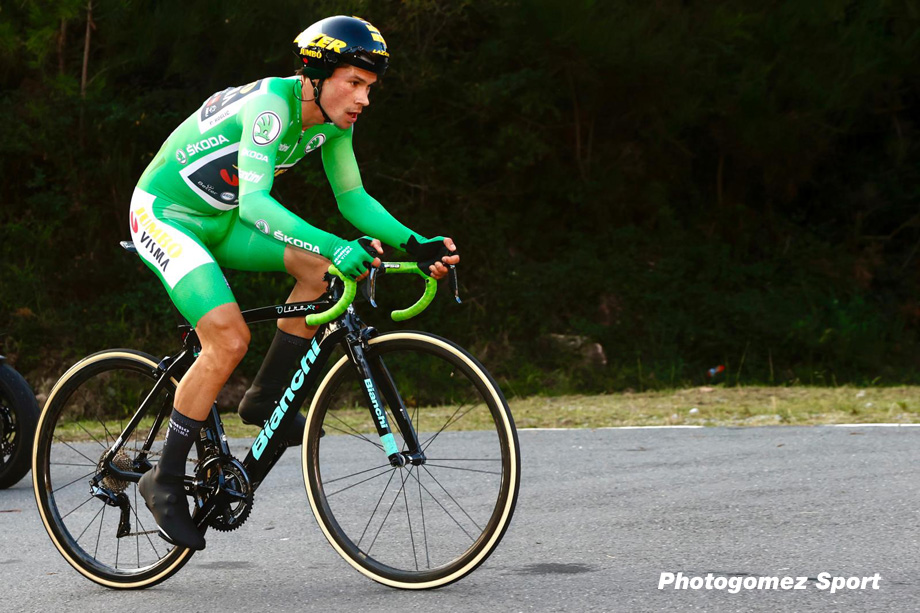 No repeat of the Tour de France for Roglič

Primož Roglič rode a perfect individual time trial to the top of Mirador de Ézaro. The Jumbo-Visma Slovenian was just one second faster than the surprising William Barta, but managed to put 49 seconds on Richard Carapaz. The difference between the two on overall is now 39 seconds. 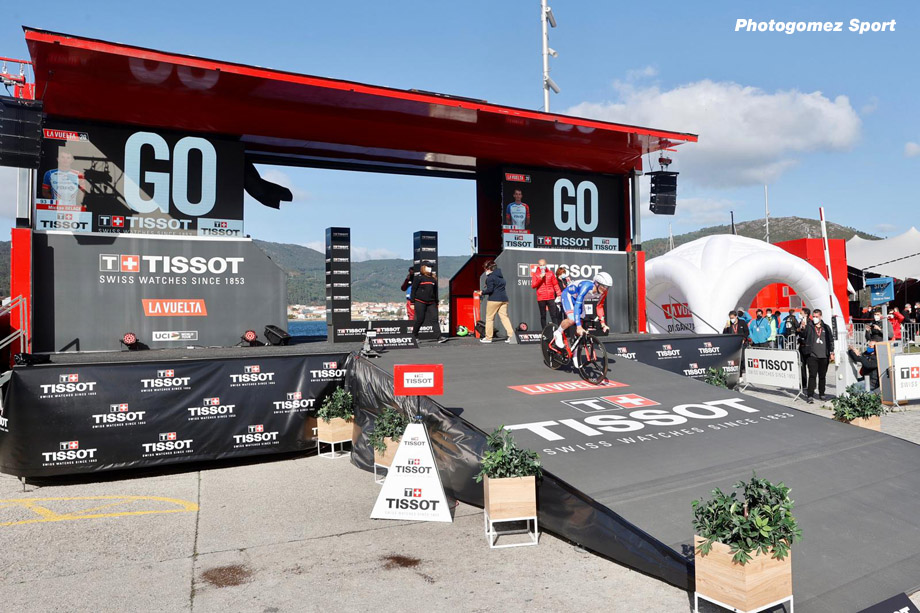 Stage 13. Muros > Mirador de Ézaro. Dumbría (ITT) – 33,7 km
La Vuelta 2020 returns to action with a time-trial to kick-off the final week to Madrid. Mickaël Delage (Groupama-FDJ) will be the first rider to go, at 13:47, and the overall leader Richard Carapaz (INEOS Grenadiers) will start last, at 16:36 CET.

Fernando Escartín’s Comment: “A time trial full of uncertainties. It will take place on the flat seashore, with possible wind head-on. The time trial specialists will have a huge advantage over climbers. The final ascent to the Mirador de Ézaro (1.5 km) may favour a change in bike: from time trial to road bikes.” 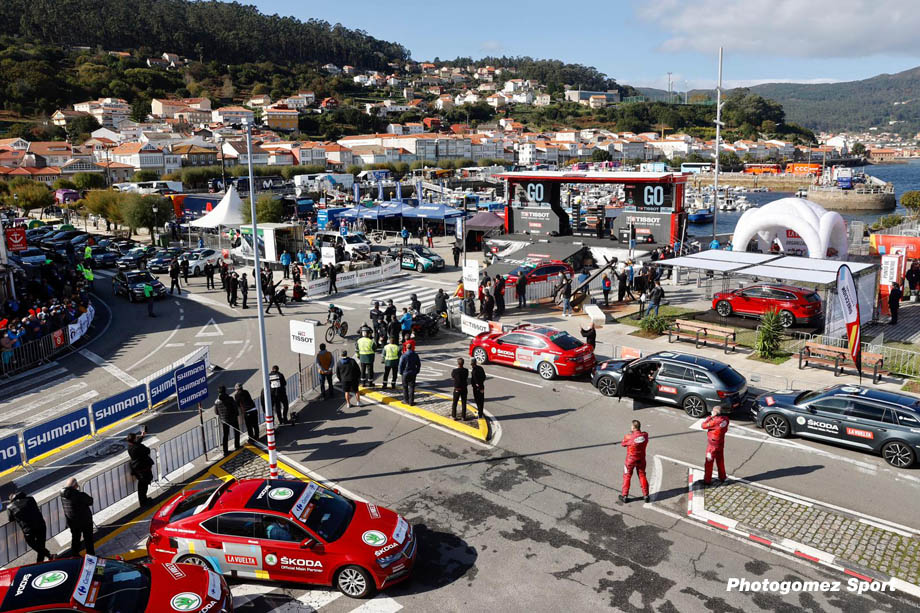 The start from Muros

The riders crossed the flat Galician coastal roads on the run-up to the final climb, making it a real time trial with two faces. The finish was at the top of the Mirador de Ézaro. Before the final climb, the riders could switch from a time trial bike to a regular road bike in a special zone. 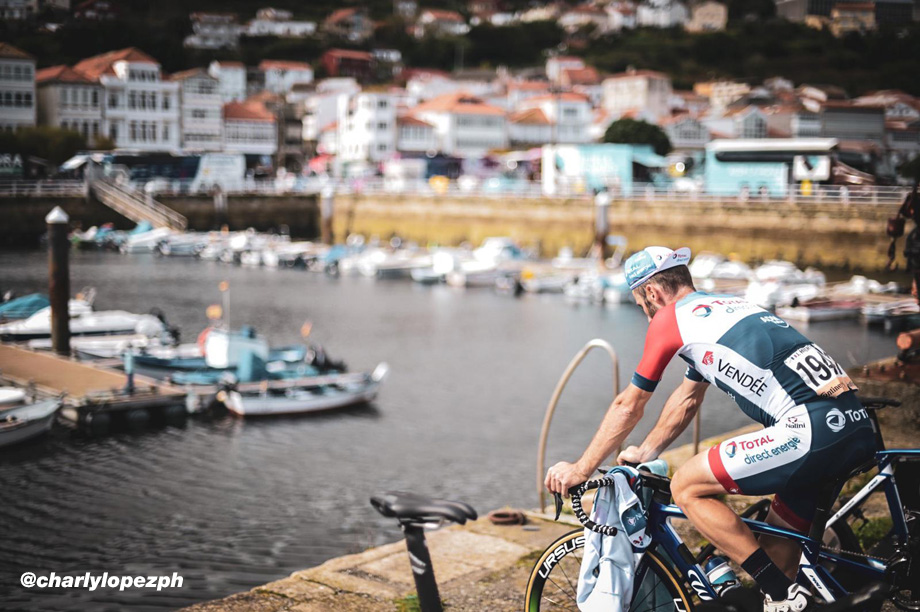 Jonathan Hivert on his warm-up

Mickaël Delage started the time trial stage at 1.47pm. Harry Tanfield, a time trial specialist, managed to clock good intermediate times, but lost speed on the final climb. Tanfield had to settle for a time just under 49 minutes. The Briton managed to set the best time, but soon saw Alexander Edmondson go faster. The Australian rode well on the Mirador de Ézaro and managed to turn a 10 second gap into a 28 second lead. Edmondson clocked 48:24, an average of 41.8 kilometres per hour. Rémi Cavagna, one of the favourites for the victory, had to concede 2 seconds to Edmondson at the first intermediate point, but turned out to be 8 seconds faster at the second point. Cavagna changed bikes just before the final climb, given the steepness of the Mirador de Ézaro. 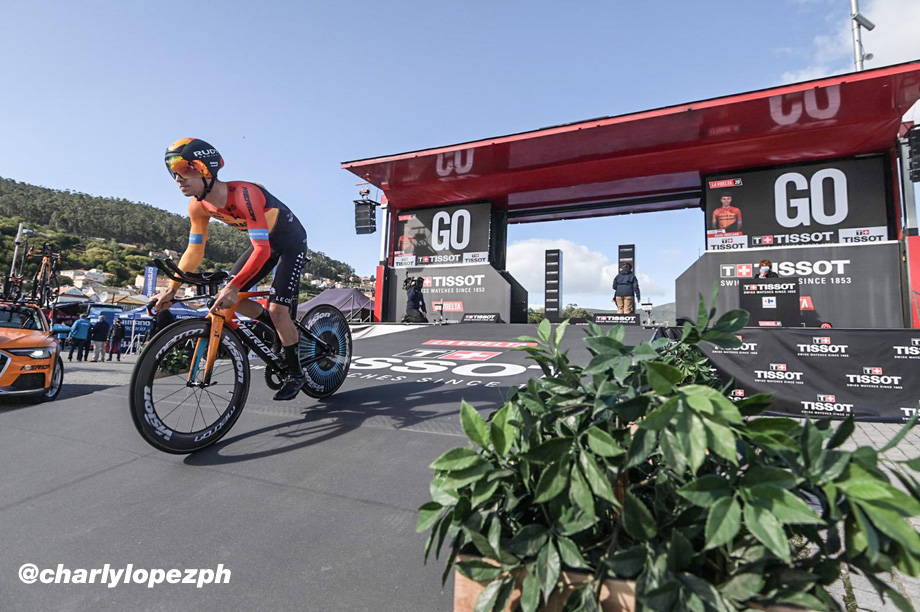 Cavagna had a good pace on his road bike on the steepest ramps of the Mirador de Ézaro, and was 47 seconds faster than Edmondson at the finish with a time of 47:37. The French time trial champion took the hot seat. Many riders still had to start the time trial, including top favourite Primož Roglič. 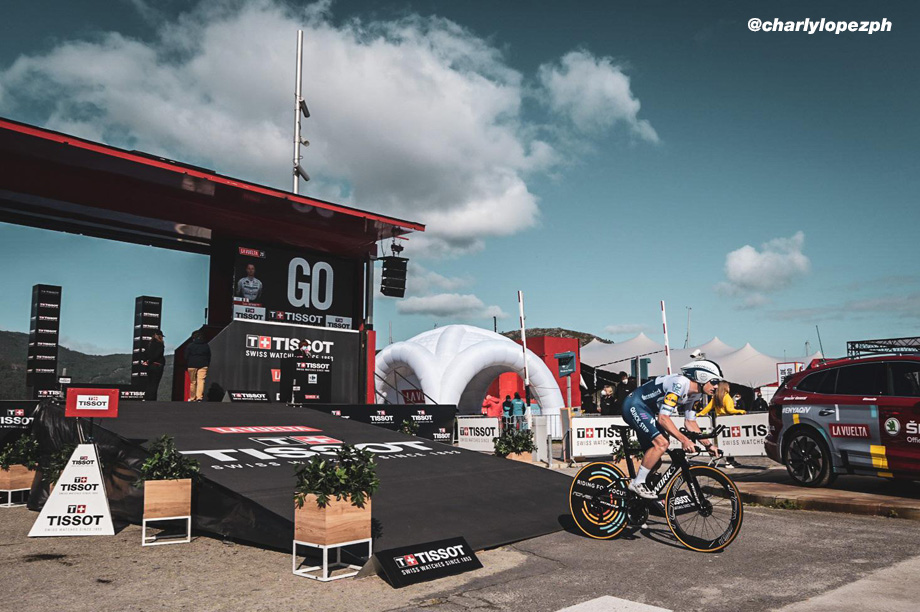 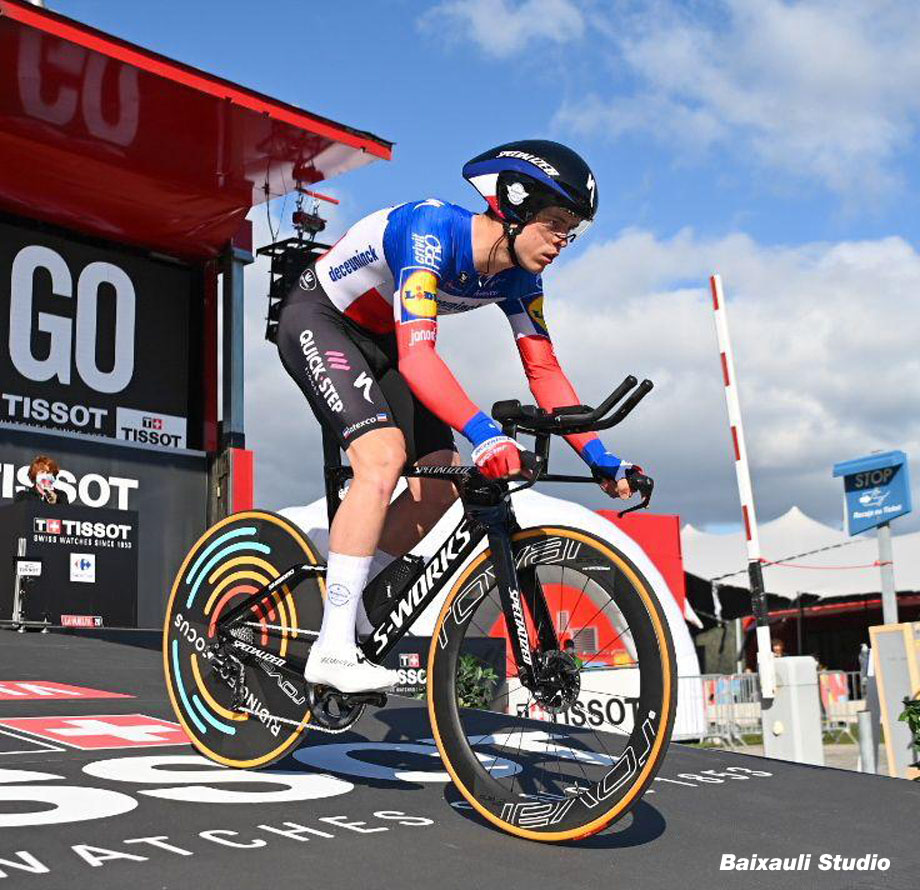 French TT champ had the lead for a while – Remi Cavagna

Next were two other favourites for the overall victory: Jasha Sütterlin and Nelson Oliveira. The German rode a strong time trial, managed to get close to Cavagna’s split times and was only 9 seconds slower than the Frenchman at the finish. Oliveira also shot off the starting blocks and was 18 seconds faster at the first point. Oliveira opted for a fast start, but did not stop at the foot of the final climb. At the second measuring point the difference with Cavagna increased to 25 seconds and at the finish Oliveira managed to extend his lead a little further to 48 seconds. Movistar’s Portuguese rider was the first to go under 47 minutes. 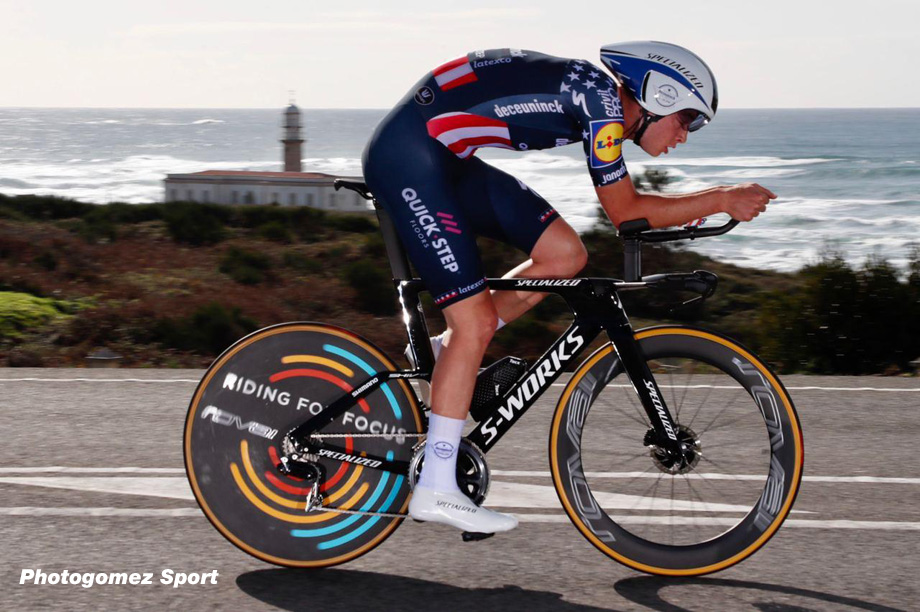 Oliveira could dream of the stage victory for a while, but he was seriously challenged by Will Barta. The CCC American, who is looking for a contract for 2021, managed to achieve exactly the same time at the first and second intermediate point and climbed the Mirador de Ézaro faster. The difference at the line was 9 seconds (46:40 to 46:49) in favour of Barta. 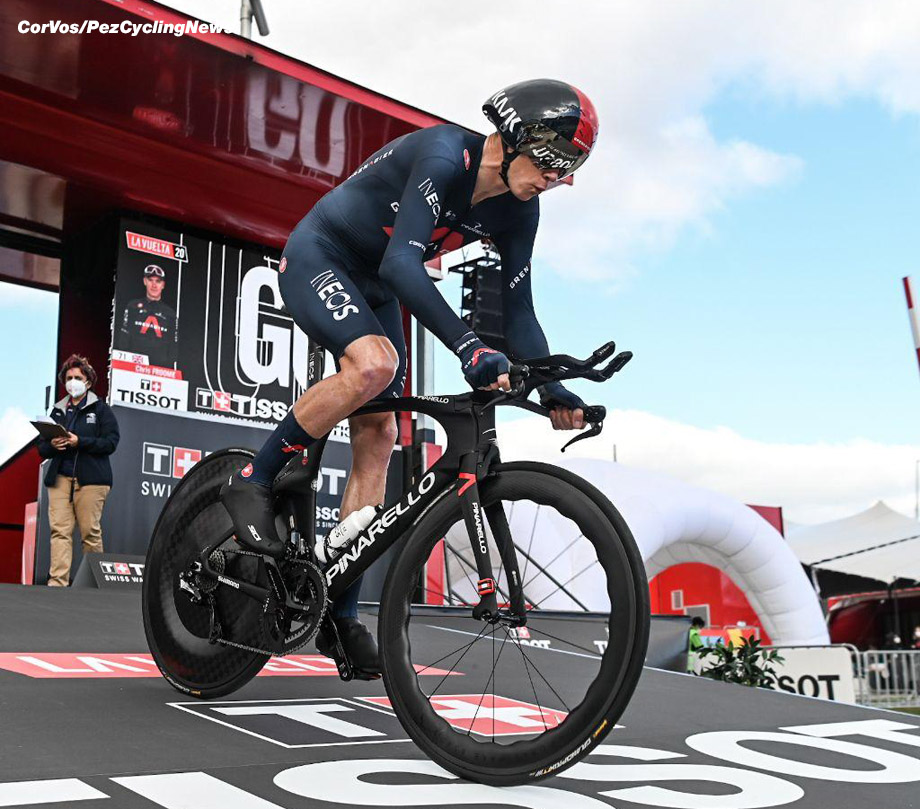 A lot was expected from Roglič at the first intermediate point, but the Slovenian clocked the 5th fastest time and had to give in to Hugh Carthy for 2 seconds after 12 kilometres. The latter rode 14:48 and was the fastest among the GC riders, closely followed by Roglič, at 2 seconds and Carapaz, who had to concede 4 seconds to the Slovenian. 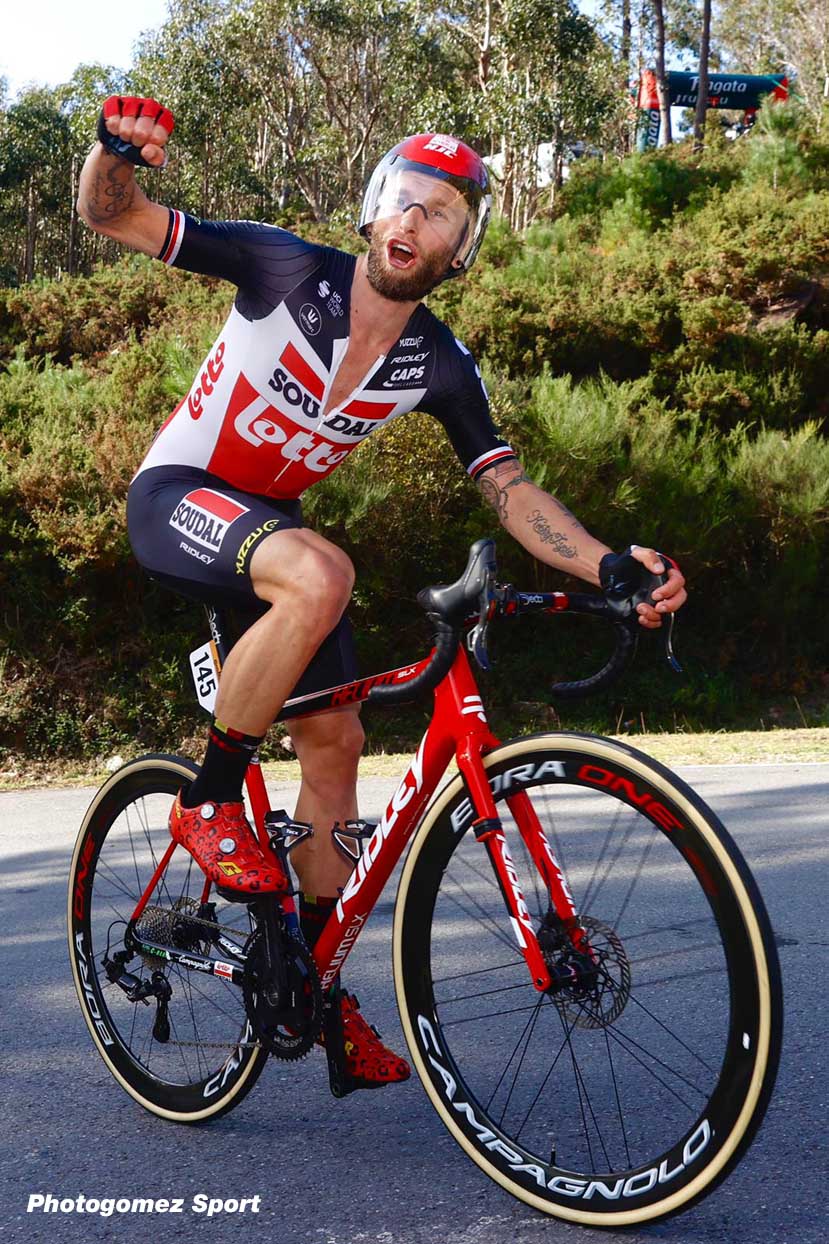 Tomasz Marczynski was pleased with the TT 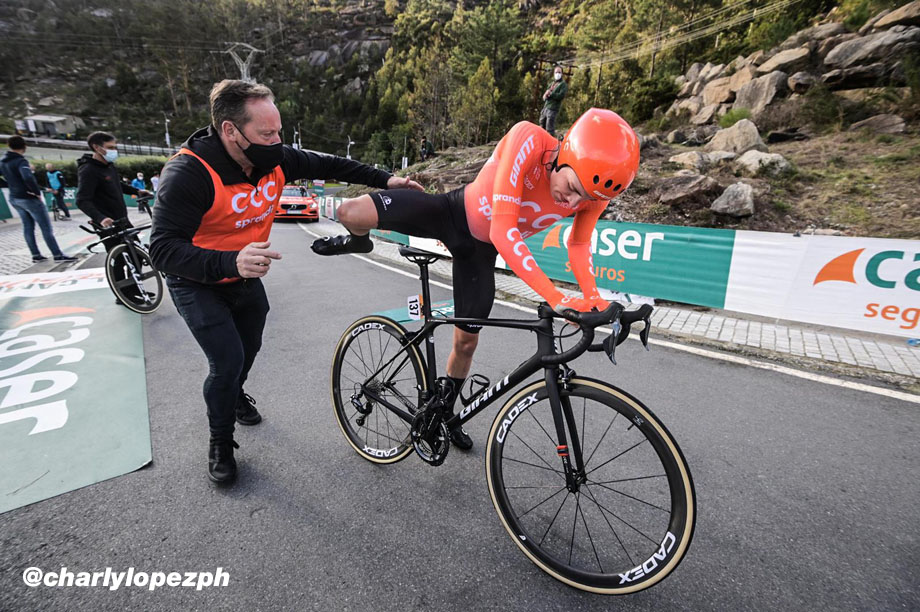 Bike change for Barta at the start of the climb

Daniel Martin (15:13) and Enric Mas (15:21), 4th and 5th on the general classification. For Roglič today it was important to finish with climbers like Carthy and Carapaz, but the leader of Jumbo-Visma was not doing the best time trial of his career and failed to put Carthy behind him. Although he turned out to be slightly faster at the second intermediate point. 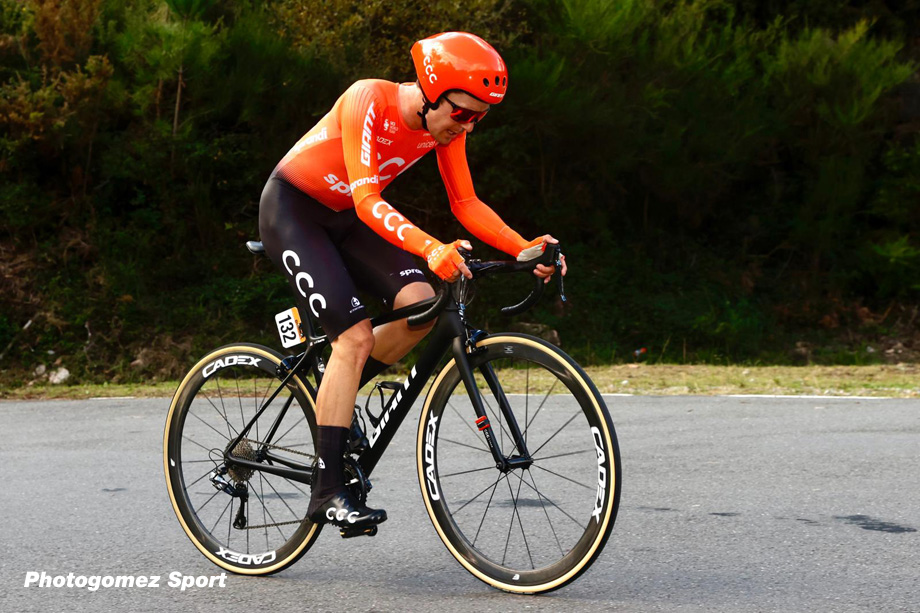 A very good ride from Barta to take the lead

Roglič turned out to be one second faster after 24.5 kilometres than Carthy, who was still on the time trial of his life. Carapaz also managed to limit the damage, but turned out to be 19 seconds slower than his Slovenian opponent and so Roglič was on his way to the red leader’s jersey again. The winner of the 2019 Vuelta had a good head of steam and managed to close on Carthy and Carapaz in the final kilometres to the foot of Mirador de Ézaro. 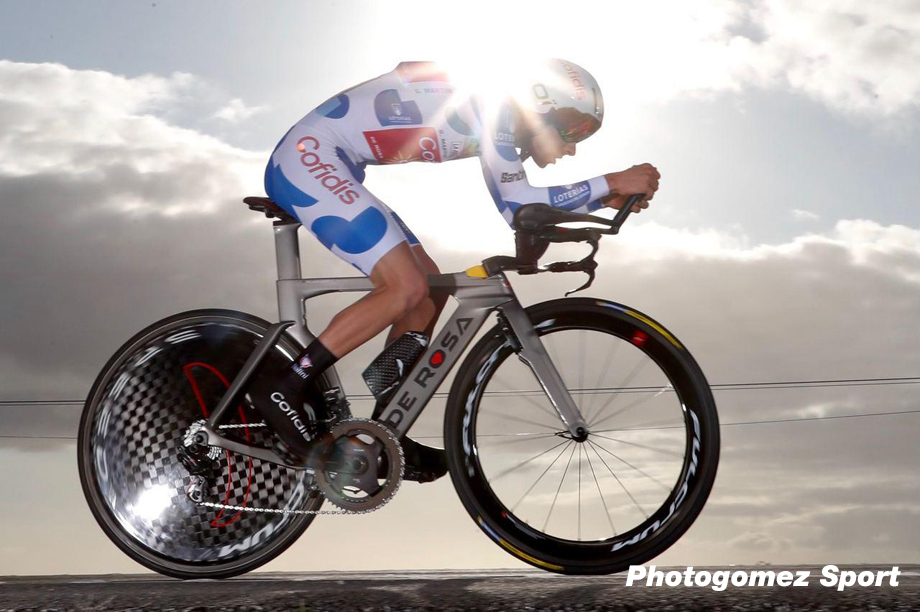 Enric Mas was the first rider in the top 5 to change, but the Spaniard was the only GC rider to change bikes in a different place, after the change zone. It did not give him a great finish time, as he lost almost 2 minutes to Barta. The CCC rider was still in the lead, but still had to wait for the finish of Daniel Martin, Carthy, Roglič and red jersey wearer Carapaz. Martin lost more than 1 minute at top of Mirador de Ézaro, but rode a good time trial and managed to grab some extra time on Mas. Carthy turned out to be 24 seconds slower than Barta, but the real winner of the day was Primož Roglič. 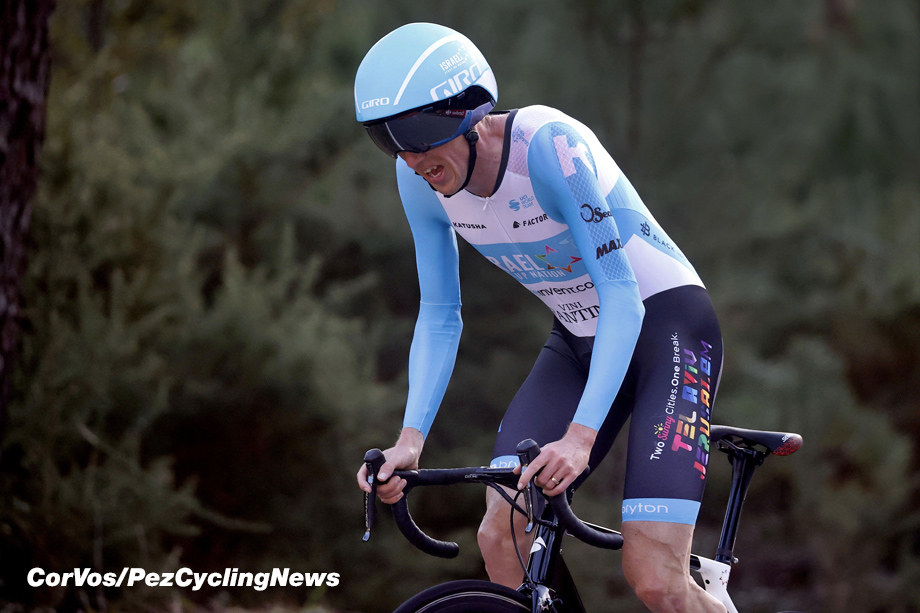 Dan Martin still 4th overall, but now at 1:42 to Roglič

The Slovenian managed to take quite some time on his competitors after a slow start. Roglič was 25 seconds faster than Carthy after a strong climb, but even more important was the difference to Carapaz. The Ecuadorian lost 49 seconds at the finish, so the difference between the two is now 39 seconds in favour of the Jumbo-Visma leader. 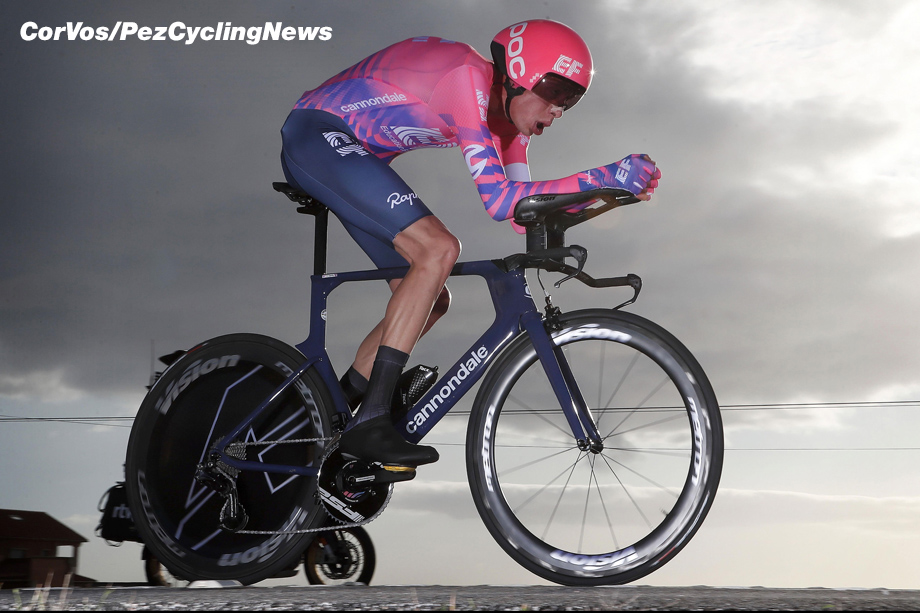 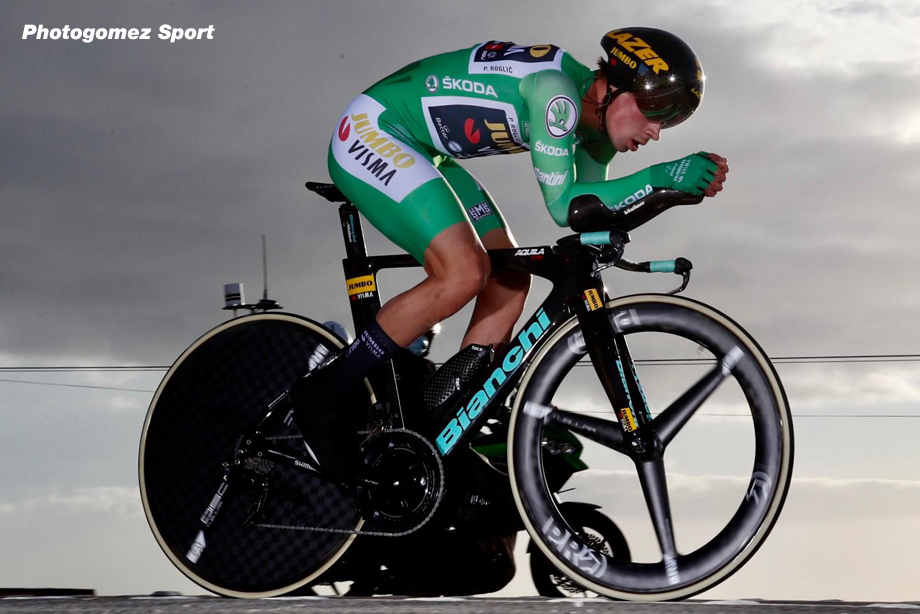 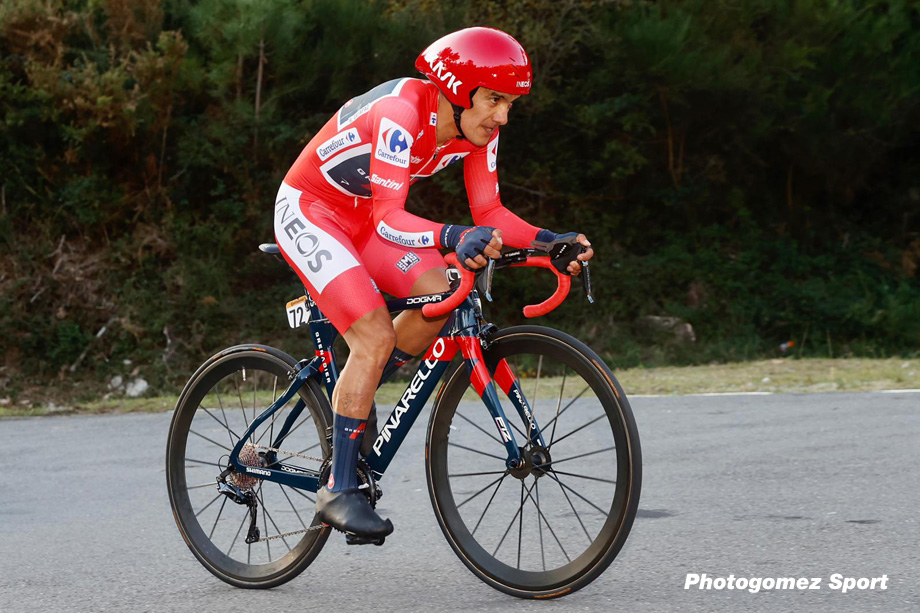 Not a bad ride from Carapaz, but he has a hard job ahead

Stage winner and overall leader, Primoz Roglic (Jumbo-Visma): “It’s a nice victory because it’s been a long time since I last won a time trial. It’s a super nice day! Surprisingly I felt strong. I expected to suffer a lot more. Many people also expected me to lose time from Carapaz up the hill but we all started from scratch with the same chances. We all know it’s not a fun thing to do a time trial but luckily today I had the legs. Better be 39 seconds in the front now than 39 seconds behind. We need to keep the focus. The guys are really strong. We will fight for the overall win.”