Stage win for Tim Wellens, no change in the overall

Vuelta Stage Report: Stage 14 was always going to a be ‘Break Day’ but it nearly wasn’t, as Astana had missed the move. On a fast day the break held off the bunch, split, regrouped and we had six riders fighting for the victory. On the sharp uphill finish; Tim Wellens (Lotto Soudal) got the better of Michael Woods (EF Pro Cycling) and Zdeněk Štybar (Deceuninck – Quick-Step). 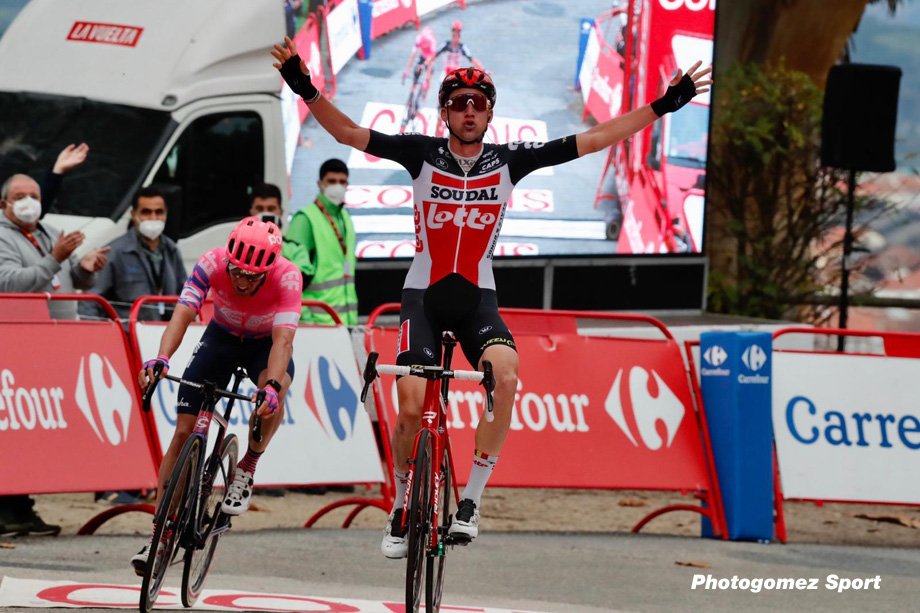 Wellens was to going to be beaten

Tim Wellens took his second stage victory in the Vuelta a España. In Ourense, where the finish line was on a short climb of just under two kilometres, he beat Michael Woods and Zdeněk Śtybar with whom he was part of the early escape. Primož Roglič kept the red jersey. 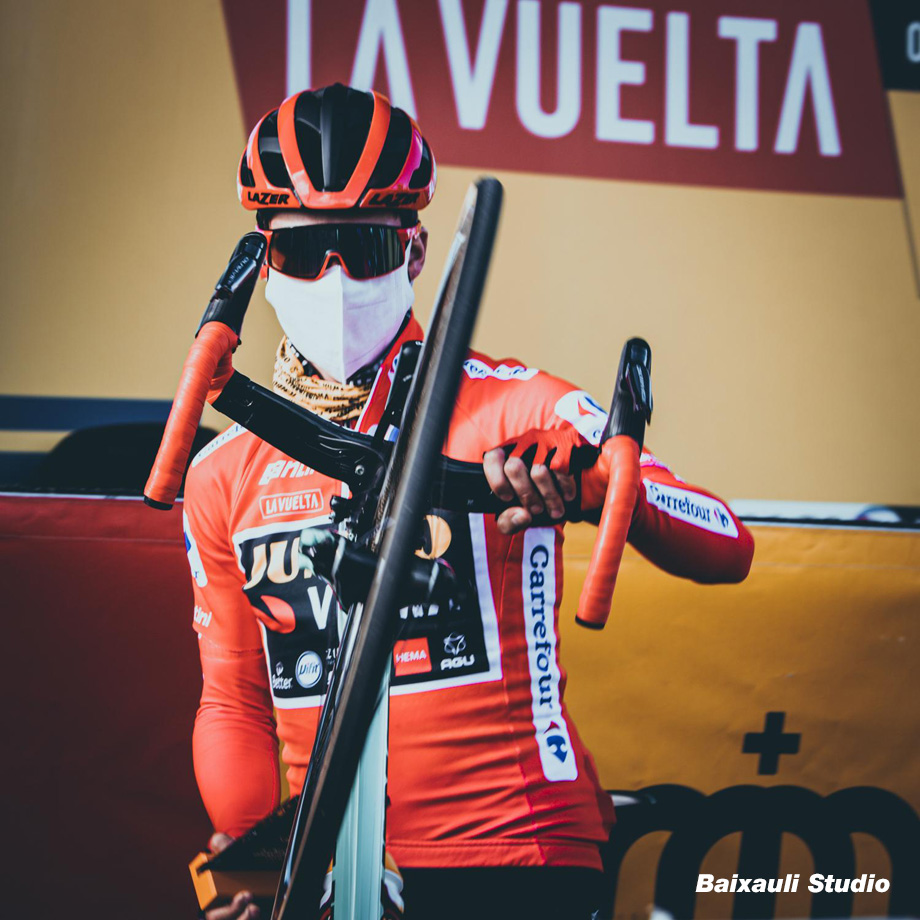 Primoz Rogič – Back in red

Stage 14. Lugo > Ourense – 204,7km
An opportunity for the attackers? On the day after the individual time-trial at Mirador de Ézaro and with more challenges ahead for the GC contenders, the peloton face a hilly stage en route to a tricky finale in Ourense (204.7km).

Fernando Escartín’s Comment: “The stage will take place on typically Galician hilly terrain. The stage will feature a 3 rd category climb in its final part that should not pose a problem for riders hoping to win the general classification. Sprinter teams, faced with the likely loss of control, must concede the breakaway’s victory.” 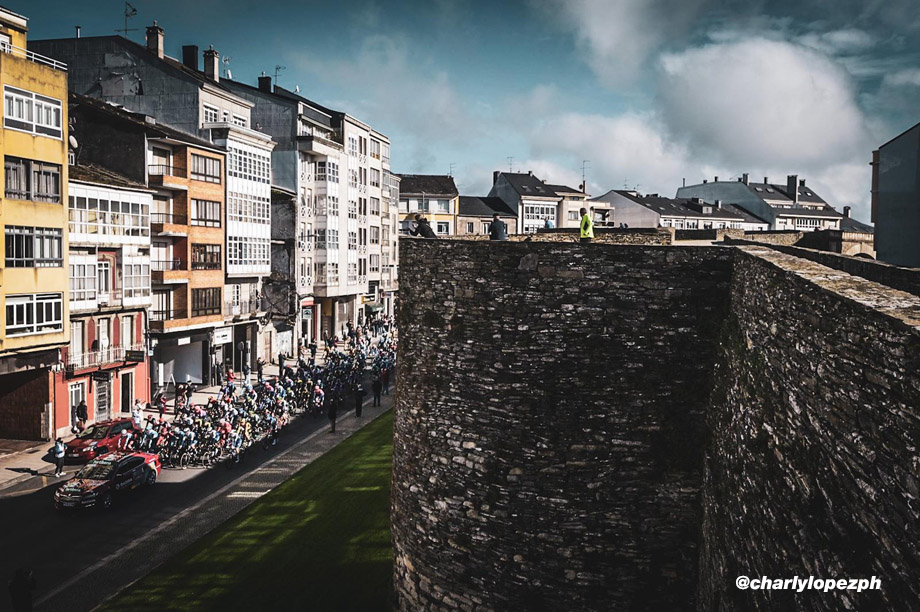 Galician town of Lugo for the stage 14 start

Right from the start the breaks started to fly. First, a group of eight including Rémi Cavagna, Jonas Vingegaard and Nans Peters left the peloton, but they were caught after 12 kilometres. Another attack with four men was also quickly caught. An escape attempt with 26 men also failed. Ultimately, Zdeněk Śtybar, Dylan van Baarle, Michael Woods, Tim Wellens and Marc Soler did stay ahead after 40 kilometres and a little later they were joined by Thymen Arensman and Pierre-Luc Périchon. At first Carlos Barbero made the crossing, but the Spaniard was dropped. 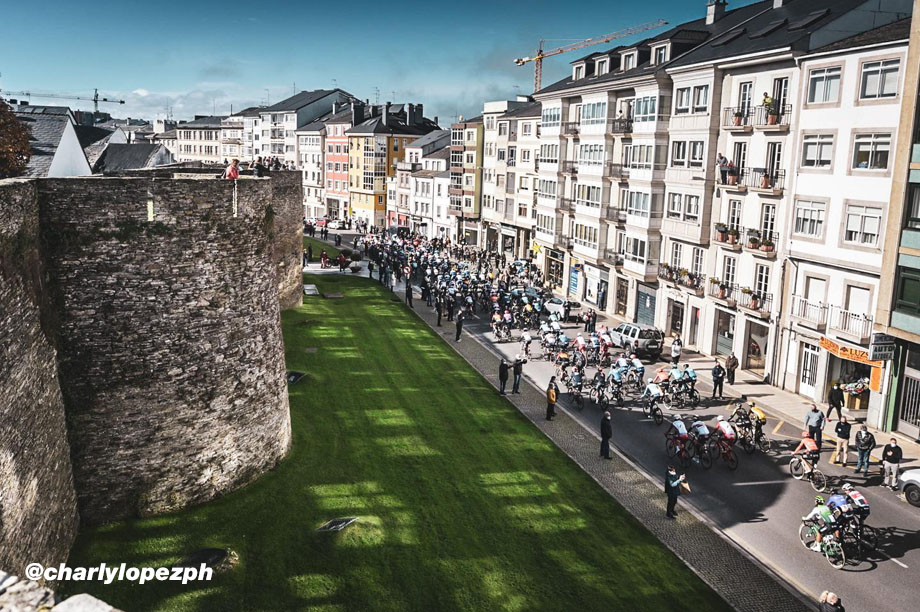 Past the Roman wall of Lugo, a World Heritage Site, the only one in the world to remain intact 17 centuries after its construction

The seven escapees worked well together and after a half-hour battle, they were allowed more time by the peloton and their lead went up to more than 5 minutes. Three men from the leading group already had a stage victory; Soler, who was the best on GC, won on the second day in Lekunberri. Three days later Wellens was successful in Sabiñánigo. In the first week Woods triumphed in Villanueva de Valdegovia. 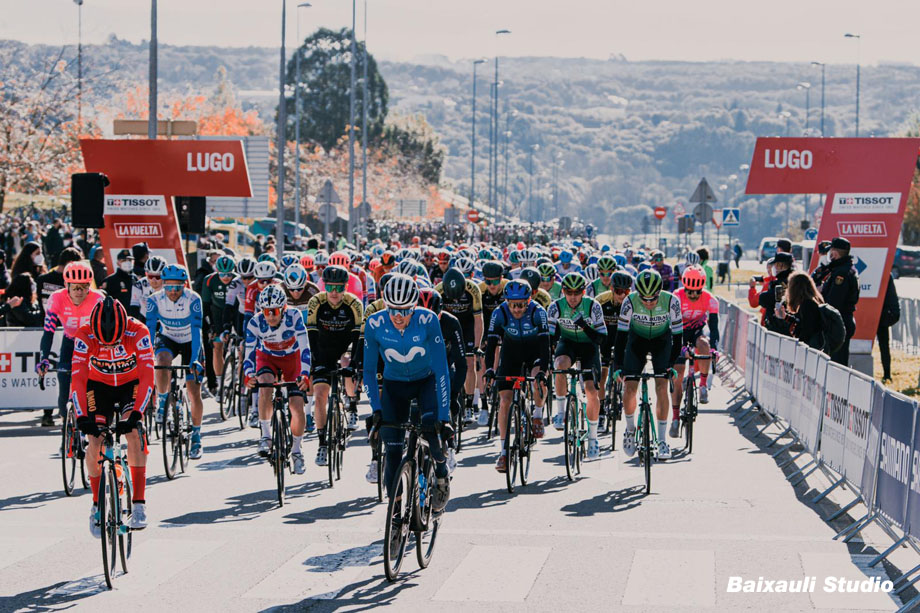 BORA-hansgrohe and Astana, with Jumbo-Visma behind them, kept the lead of the escape between five and five and a half minutes on the run-up to the first climb, the Alto de Escairón. After 112.7 kilometres, Périchon was the first to reach the top, ahead of Wellens and Woods. There was a crash in the peloton, but the riders involved, Niki Terpstra and Max Kanter, were able to continue. 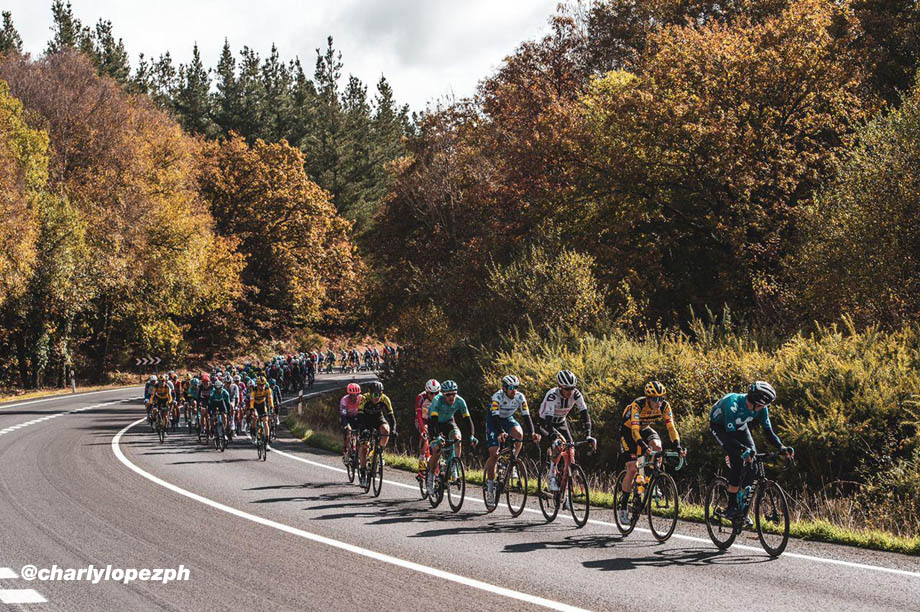 The break trying to escape

By the intermediate sprint after 126 kilometres, the lead of the leading group had dropped, but the escape managed to take some time again on the run-up to the Alto de Guitara. Wellens, after 142.8 kilometres, rounded the summit ahead of Périchon and Woods. Then Total Direct Energie began to chase. With five men, the French team took to the head of the peloton and the time came down again. 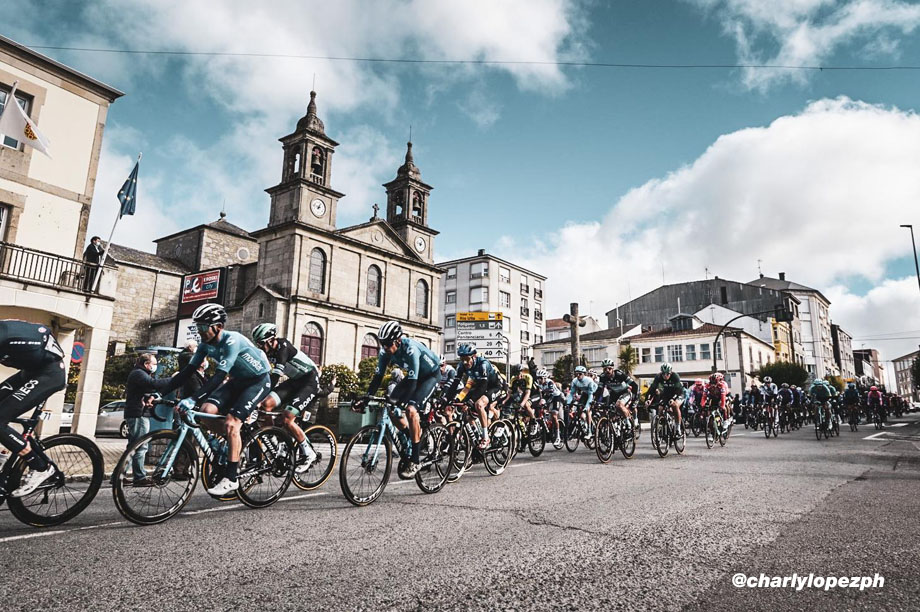 The peloton didn’t want the break to get too far

With a lead of 2:30, the leading group started the third climb of the day, the Alto de Abelaira. Two and a half kilometres from the top, Woods attacked. The winner of the stage to Villanueva de Valdegovia immediately had a gap, after which Wellens and Soler managed to cross. Štybar, Van Baarle and Arensman also caught up with the Canadian, while Périchon didn’t. 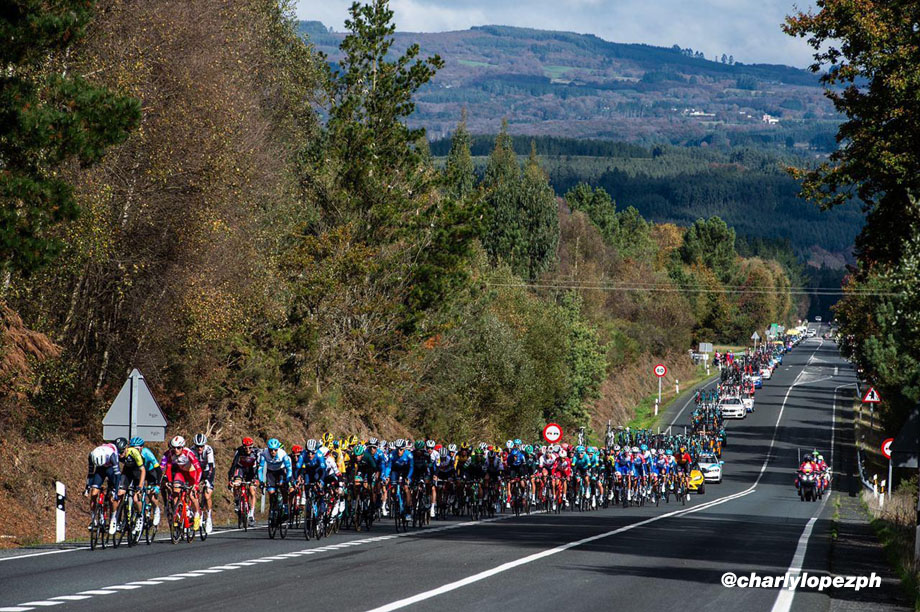 Astana wanted to chase, but no one wanted to help

Just after the summit, with 22.7 kilometres to go, Soler attacked, but the other five escapees were ready for him. Just over 20 kilometres from the line, the Spaniard accelerated again, but again the others were on the ball. A third jump from the Movistar rider was also unsuccessful. In the meantime, the difference had fallen to less than 2 minutes; at 18 kilometres, however the peloton had lost interest. 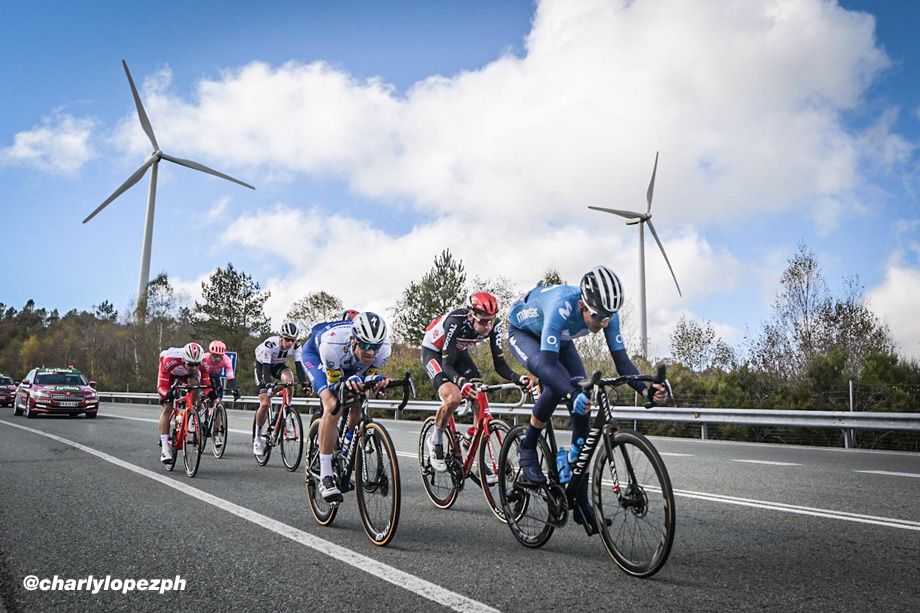 Because the chase in the peloton stopped, the escapees pushed their advantage up again. On the descent after the Alto de Abelaira, Štybar and Soler rode away, but Wellens got over to them. At first, Van Baarle, Woods and Arensman seemed to be out of the race, but at the start of the last 2 kilometres they had the three front riders in their sights. At 1.3 kilometres from the line the six were together for the last climb to the line. 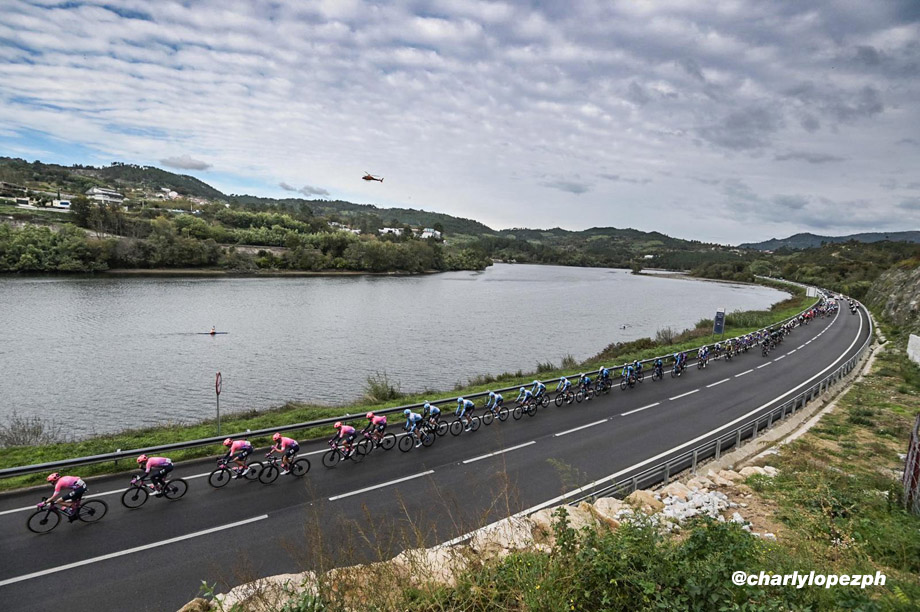 The peloton tried to pull the break back…

Early on the climb to Ourense’s seminary, Woods set the pace with Soler and Wellens on his wheel. With seven hundred meters to go, the EF rider lifted the pace. Wellens hit the front at 500 metres, after which Soler accelerated. However, the Belgian was able to counter the attack. In the last 200 metres Wellens put in his acceleration and managed to keep the lead until the finish. Woods was second, Štybar third. 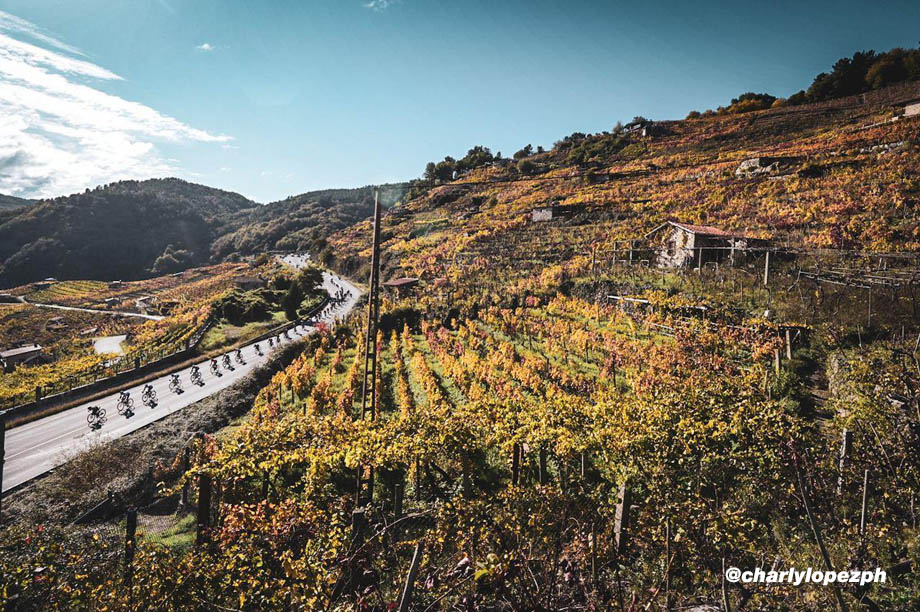 The colours of autumn in Galicia

The peloton crossed the line after 3:44 with the favourites on the same time. Primož Roglič will start again in red on Thursday with his 39 second lead over Richard Carapaz and 47 on Hugh Carthy. 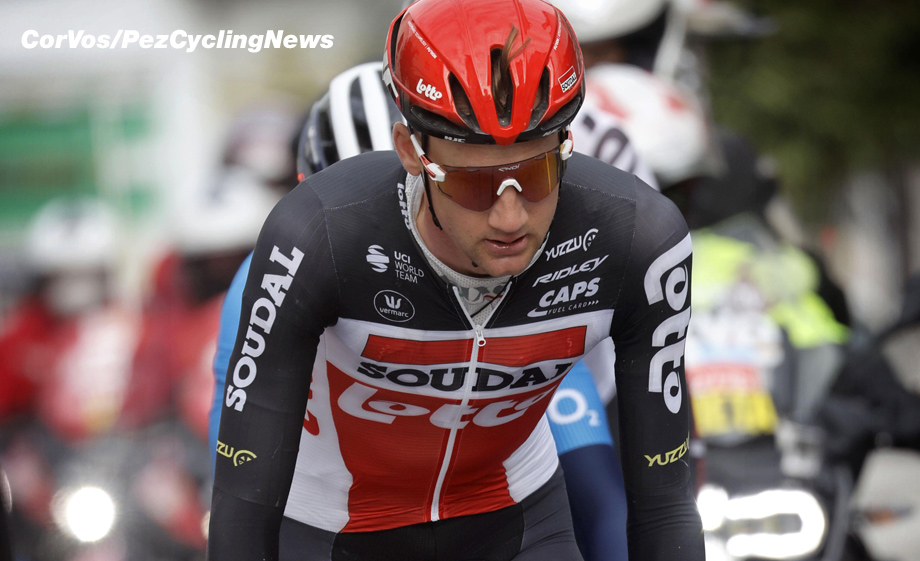 Tim wellens – Hard to beat on this kind of finish

Stage winner, Tim Wellens (Lotto Soudal): “It was not easy to win. There was a big fight to get in the breakaway and then all my companions were really strong riders. We rode a really good tempo for the whole day and then we went away with three riders on a downhill. I thought we’d stay in front but the others came back. Then I knew I had to be in the front position in the last corner. I felt Woods coming but the finish line was there and I crossed it first. The whole day, I had the impression Van Baarle was the best. But when we split up a little bit, I saw that Woods and Soler had really good legs. I was afraid of Woods for the uphill sprint but I did well, going first. We came with the team with the goal of a stage victory. The first one came and we had less pressure to go for a second one. I knew today suited me very well. It’s one thing to look forward to a stage but then it’s another to be in the right position. Today, everything was perfect.” 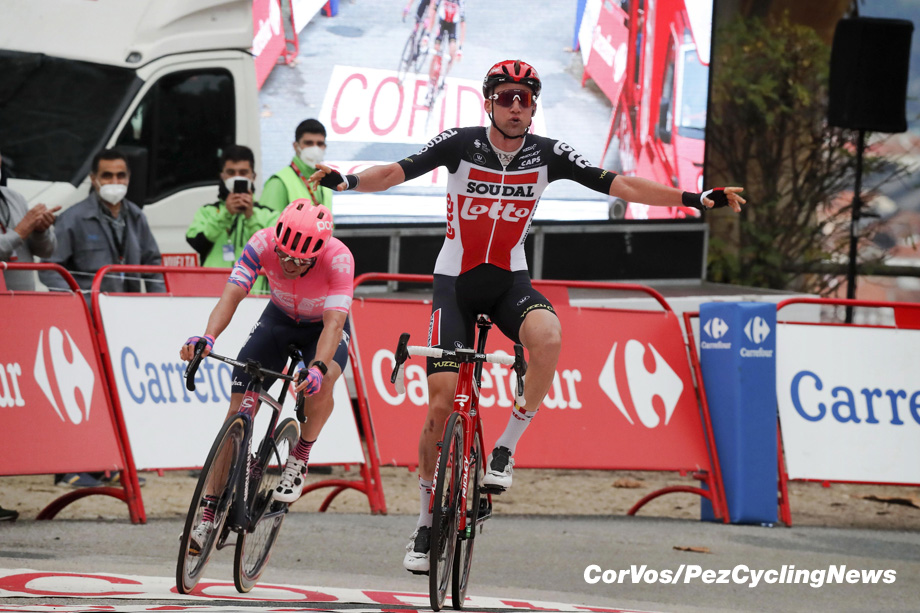 Overall leader, Primoz Roglic (Jumbo-Visma): “It was really fast, very difficult for all of us, but our guys did again a great job. We are all here to race. It was quite a fast and hard stage all the way to the finish line. For us it was okay but the guys that could go out in the breakaway had to be really strong guys, so it was a really strong group and it was almost impossible to catch them. It was again a good day for us. If there had been opportunity [to take time], definitely. But the breakaway was there and it was also for us a big sprint to come here to the top.”

# Another day down, but the big day on Saturday still to come and there could be a surprise before then. Keep it PEZ. #