Vuelta Stage Report: Stage 16 was a tough day for everyone after yesterday’s cold and wet stage. The break was caught and Remi Cavagna (Deceuninck – Quick-Step) went on a solo hunt for the win. He was pulled back with 3K to go and the sprint from a small bunch went to EF Pro Cyclings’ Magnus Cort Nielsen. Overall leader, Primoz Roglič (Jumbo-Visma) was second on the stage to add 6 seconds to his overall lead. The Slovenian now has 45 seconds on Richard Carapaz (INEOS Grenadiers) going into the last mountain stage. 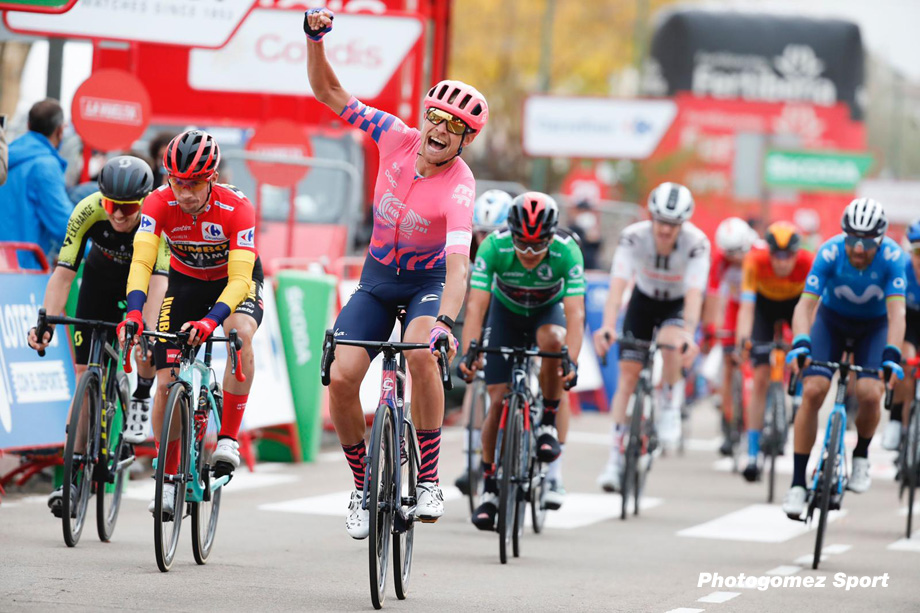 Stage win for Magnus Cort ahead of the GC men

The sixteenth stage of the 2020 Vuelta a España 2020 was won by Magnus Cort. After a difficult stage with the finish in Ciudad Rodrigo, the strong Dane was the fastest of a considerably reduced peloton. The red jersey of Primož Roglič was no danger, the GC leader finished second. 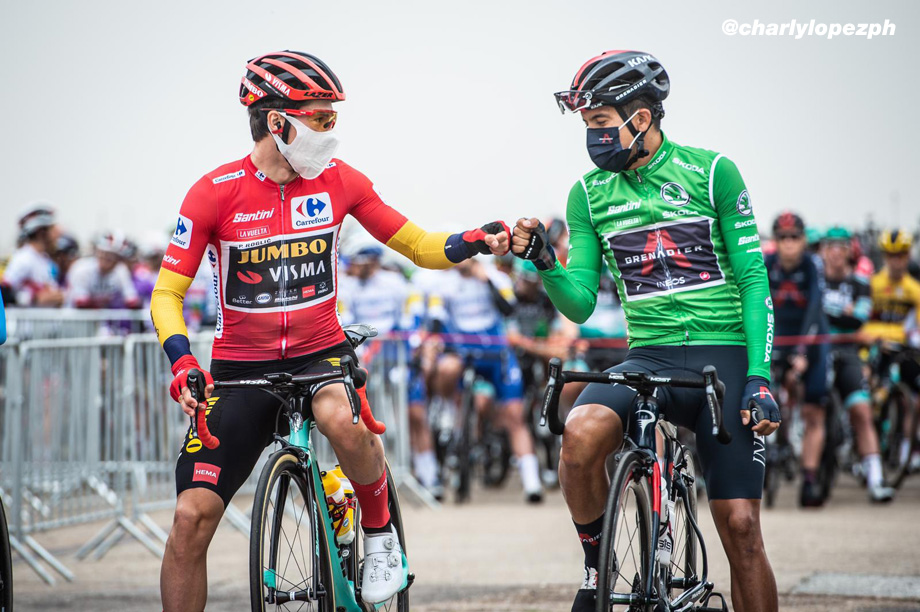 Saturday will be the last chance for everyone

Stage 16. Salamanca > Ciudad Rodrigo – 162 km
The peloton of La Vuelta 2020 return to action in Castilla-y-Leon with a 162km stage to Ciudad Rodrigo. Today’s stage features two main uphill challenges: Puerto El Portillo (13.8km at 4.4%) and Puerto El Robledo (11.7km at 3.8%). Salamanca has already welcomed twenty-one stage starts, the last one in 2018. Simon Yates was wearing La Roja and the race headed for Fermoselle, where Elia Viviani took the bunch sprint ahead of Peter Sagan and Giacomo Nizzolo. Twenty-two stages have also finished in Salamanca. In 2011, Tony Martin dominated the time-trial in the city, ahead of Chris Froome, who claimed La Roja for the first time on that day. 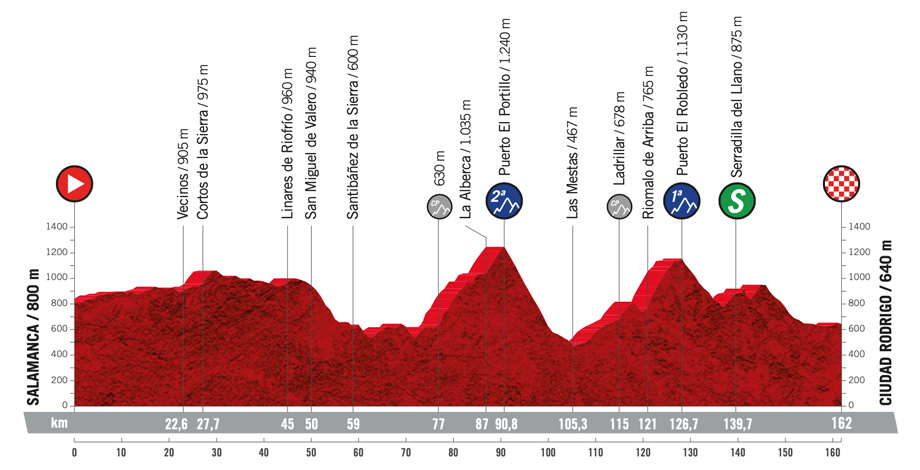 Fernando Escartín’s Comment: “A hilly stage, with a 1st category climb (El Robledo) 30 km from the finish-line, which will create a natural selection of the peloton. It is likely that a reduced group, made up of 30-40 riders, will arrive together. The riders fighting for GC will have to really concentrate, as a mistake so close to the end could cost them dearly.” 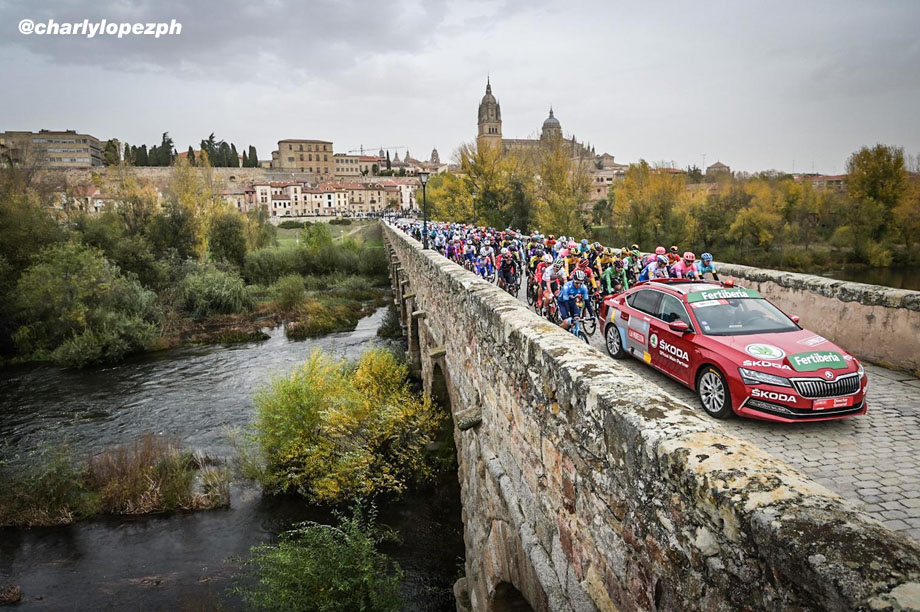 The peloton roll out of Salamanca 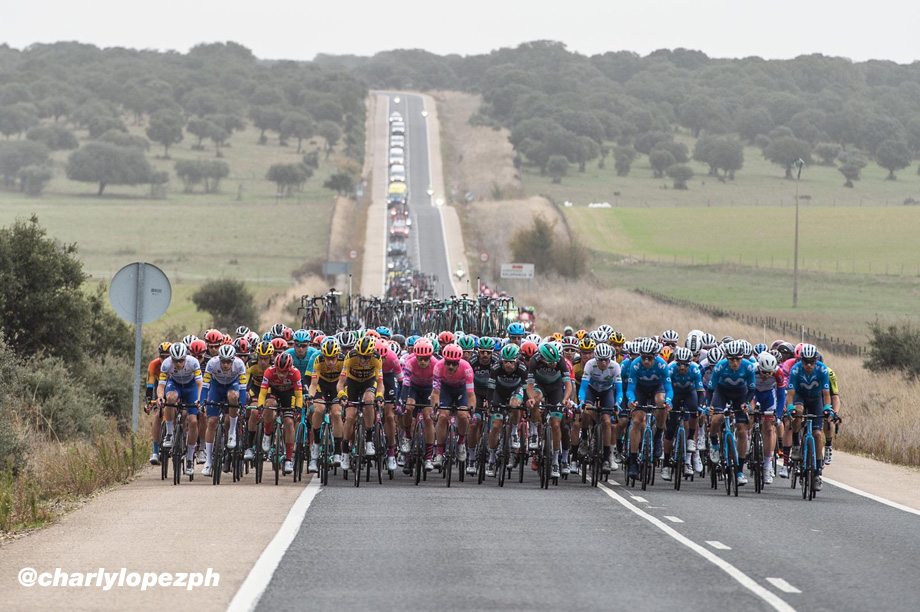 The peloton wasn’t letting anyone get too far ahead

On the first climb of the day, the Puerto El Portillo, Osorio was dropped from the leading group. The other five kept a lead of more than 4 minutes on the peloton. On the descent of the Portillo, INEOS Grenadiers put the pressure on, but Jumbo-Visma and Primož Roglič were close at hand. Due to the high speed the difference to the leading group was reduced to 2 minutes. 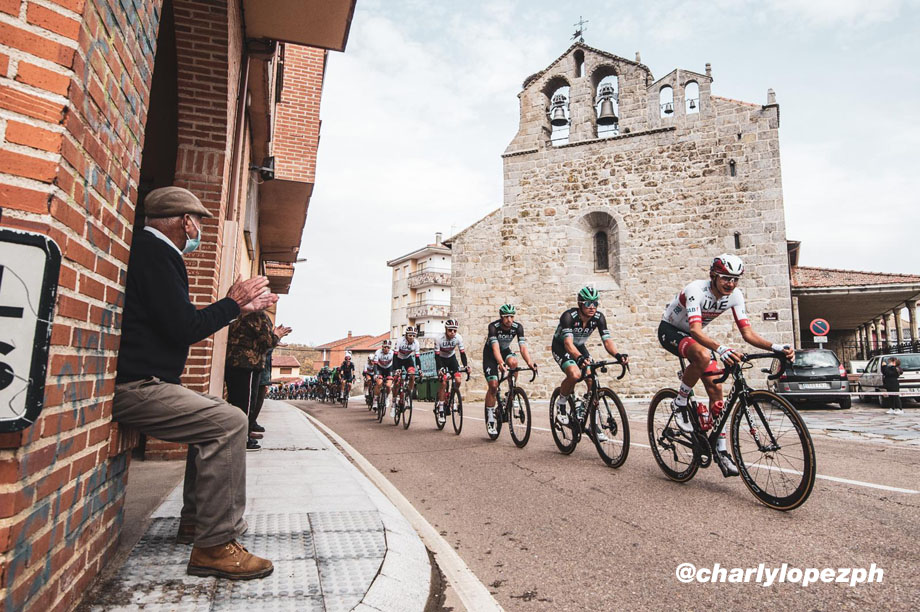 The fans were out in Linares de Riofrio

The leading group of Cavagna, Stannard, Goossens and Madrazo had a lead of 1:30 at the start of the 12 kilometre long Puerto El Robledo. INEOS Grenadiers continued the fast pace on the climb with Dylan van Baarle, Andrey Amador and Iván Ramiro Sosa, which decimated the peloton. At the front, Cavagna and Stannard turned out to have the best legs. The French-Australian duo crossed the summit of El Robledo with a lead of 20 seconds, 35 kilometres from the finish.

Movistar took over command behind, but the Spanish team was unable to cause any damage in the wind. Cavagna and Stannard held their own. The Frenchman managed to loose his Australian companion overboard on a short climb as he entered the last, mostly descending, kilometres solo. The Clermont-Ferrand TGV extended its lead over the peloton to 20 seconds. 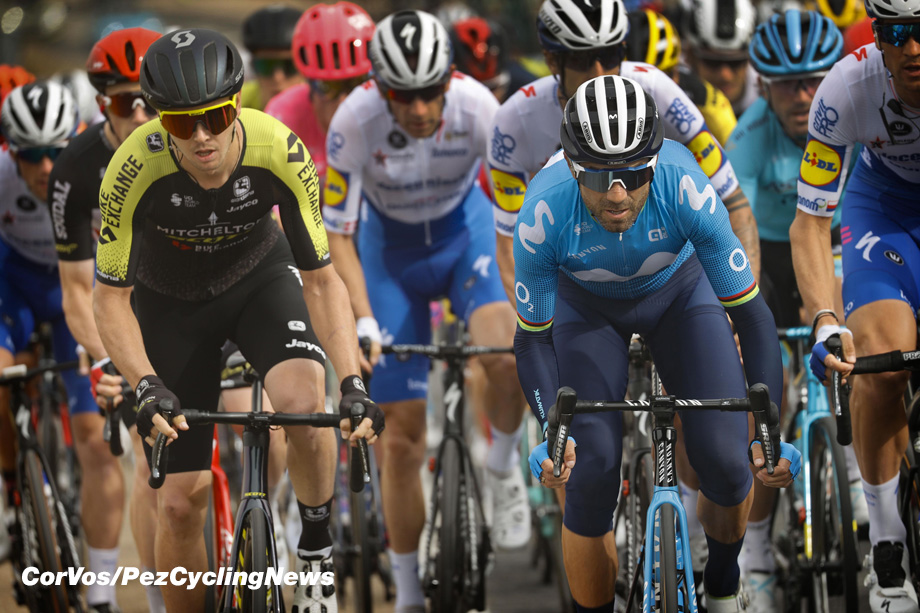 Valverde went for the sprint, but…

Movistar and Mitchelton-Scott did everything in the final kilometres to pull back Cavagna, he was finally reeled in at the two kilometre banner. The thinned peloton then started the sprint for the stage victory. Bruno Armirail went for a late move, but that attempt failed. Alejandro Valverde opened the sprint first, but he had gone too early. 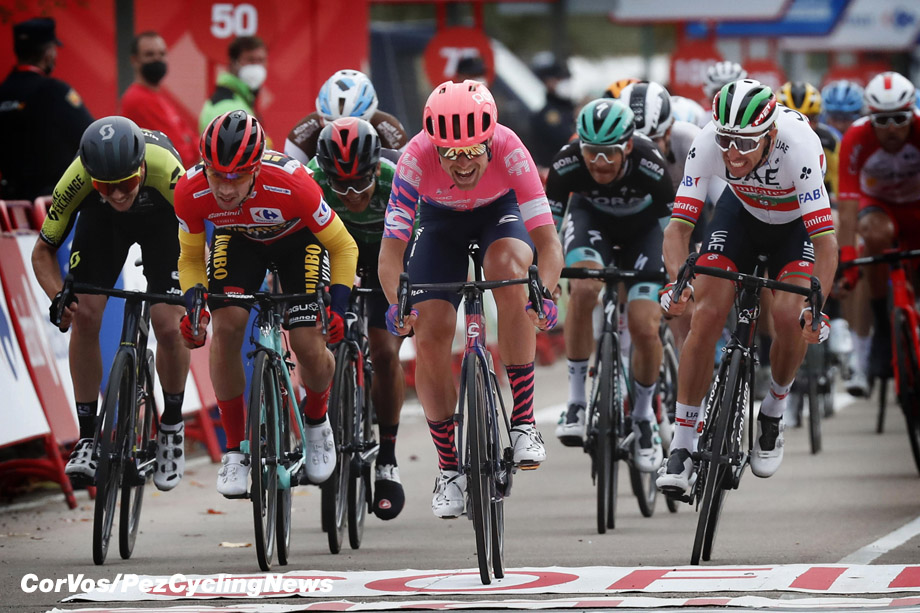 A tough sprint at the end of a hard day

In the last hundred meters Magnus Cort Nielsen came off his wheel to seize the stage victory with a strong effort. The battle for second place was won by Roglič, who pushed his wheel over the finish line just ahead of Rui Costa who was later declassed. The Slovenian GC leader took 6 bonus seconds to stretch his lead to 45 seconds over Carapaz. 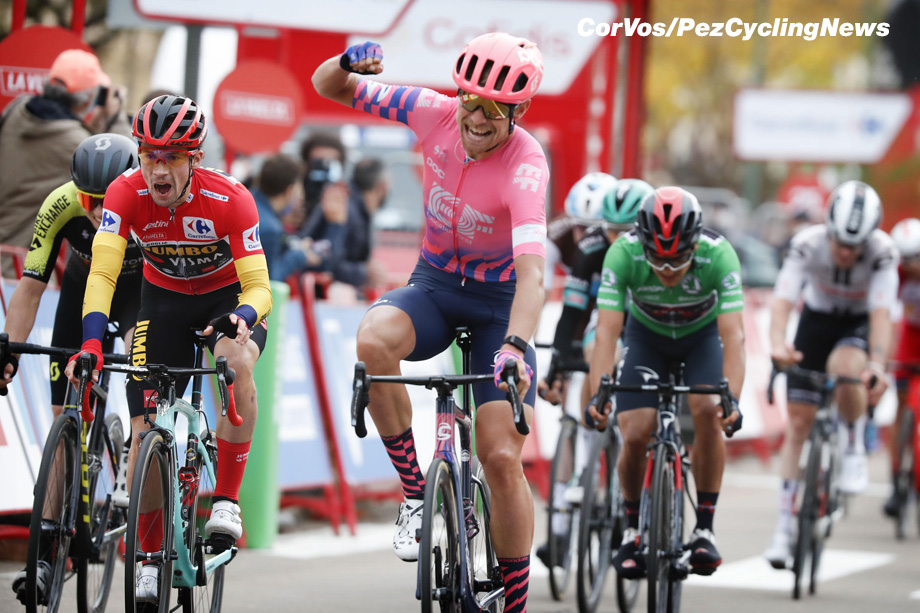 Stage winner, Magnus Cort Nielsen (EF Pro Cycling): “I think I timed my sprint pretty well. I came into the last corner not too far to the front. I was looking for an opening and I found it with about 200m to go, maybe a bit less. From there, I just went with everything I had. Starting today, I didn’t dream about winning this stage. I thought it would be a more reduced bunch in the end. Suddenly I could see my chance in the first cat climb. When I was in that reduced group, I knew there weren’t many guys faster than me. Cavagna was still in the front but luckily teams wanted to bring him back for the sprint. I think it’s been difficult for everyone this year. But it means a lot that I come back and win. I was coming into a good form when we started racing again after the long break but then I got corona myself and I was out. I’ve only trained for three weeks before coming here and it’s very nice to get a victory.” 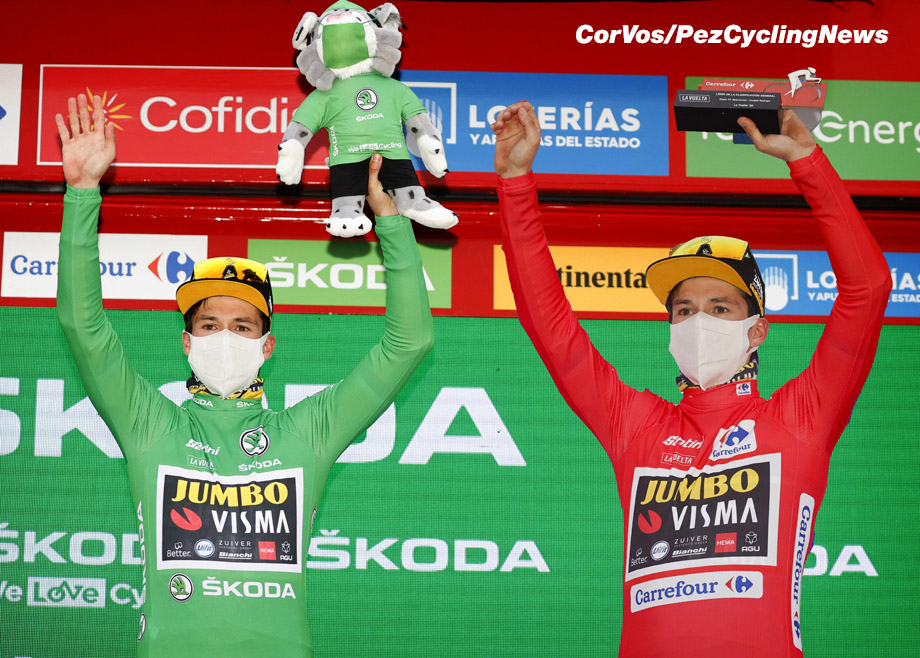 Roglic on the podium in green and red

2nd on the stage, overall and points leader, Primoz Roglič (Jumbo-Visma): “I always want to be the most complete rider. I said from the start of La Vuelta I would try my best every day. Overall, it’s a really nice day for the team. In the end, I figured why not sprint since many fast guys were dropped. As a man who wears the green jersey, I can sprint. It was easier to gain 6 seconds today than it was at l’Angliru. Still, it’s a big day tomorrow. We have to stay focused, do our best, and we see what it means.”