Stage for Gaudu and overall for Roglič

By Alastair Hamilton On Nov 7, 2020
Share
Like PEZ? Why not subscribe to our weekly newsletter to receive updates and reminders on what's cool in road cycling?

Vuelta Stage Report: David Gaudu (Groupama-FDJ) won his second stage of the 2020 Vuelta a España on the Alto de La Covatilla. Behind the Frenchman; the GC men attacked each other for the overall win. Richard Carapaz (INEOS Grenadiers) went solo, but the red jersey, Primoz Roglič (Jumbo-Visma), held him to 24 seconds to seal the final victory in Madrid tomorrow. 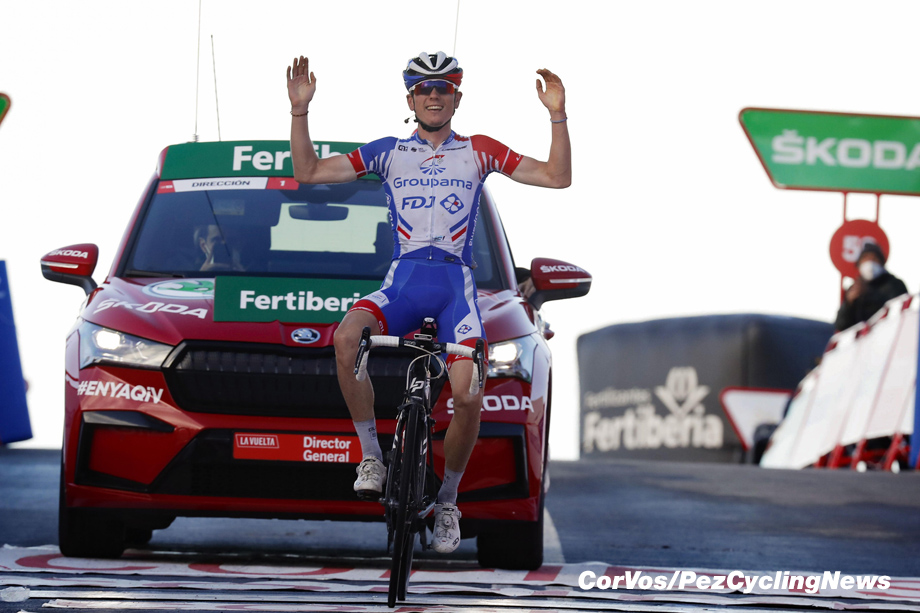 David Gaudu won the penultimate stage in the Tour of Spain. On the Alto de la Covatilla, the Frenchman was the best rider of the day for the second time in this Grand Tour. Gino Mäder finished second, Ion Izagirre third. Richard Carapaz put the leader’s jersey of Primoz Roglic under fire, but the Slovenian held on. 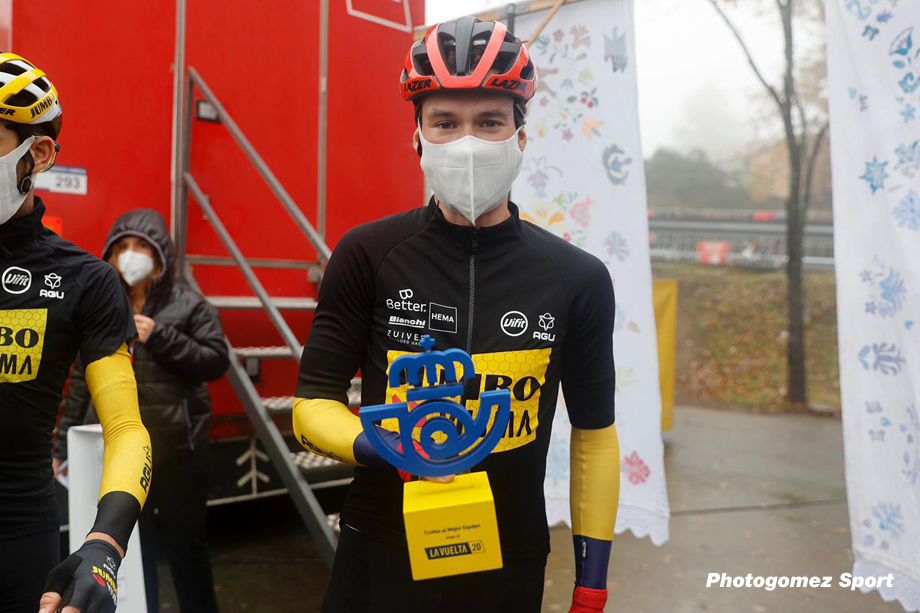 Stage 17. Sequeros > Alto de La Covatilla – 178,2km
The decisive day of La Vuelta 20. On the eve of the final stage in Madrid, the GC contenders have a last opportunity to battle it out on the slopes up the Alto de La Covatilla: 11.4km, 7.1%. La Alto de La Covatilla was one of the key stages of the Vuelta’18 due to its challenging nature, its beauty and its relevance in the fight for the GC (Simon Yates wore La Roja on its peak for the first time). The race’s previous ride through Candelario, a beautiful Salamanca village with cobblestone streets, provided some of that edition’s most memorable images. In 2020, La Vuelta will once again ride through Candelario after climbing La Garganta mountain pass; ending at La Covatilla where the winner of La Vuelta will be decided. Undoubtedly all the necessary ingredients for a historical stage. 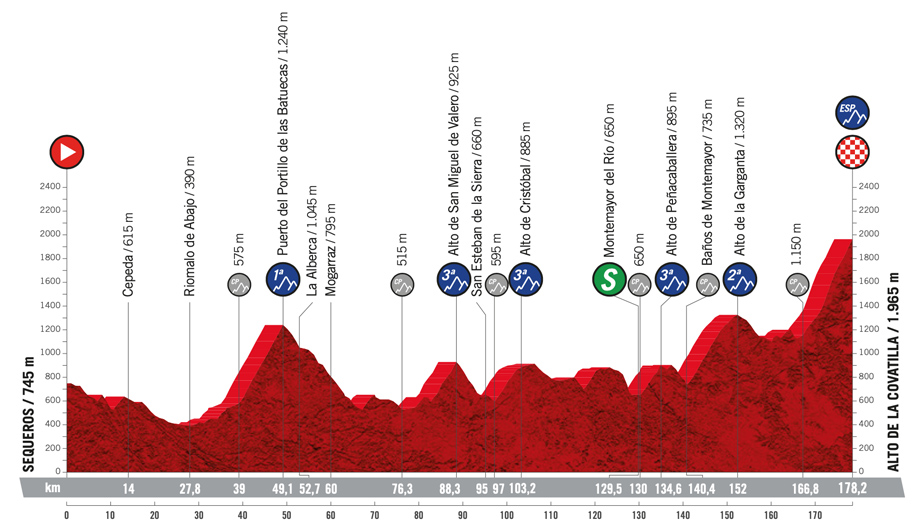 Fernando Escartín’s Comment: “The peloton will ride through a winding terrain. The first part of the stage includes the Portillo de las Batuecas (1st category) that will enable a breakaway to take place, where contenders for the GC will have one last chance to infiltrate the troops in order to face three 3rd category climbs. The unprecedented climb of La Garganta (2nd category), will precede the finale in La Covatilla, a HC mountain pass where leaders will use every inch of their strength in order to win La Vuelta.” 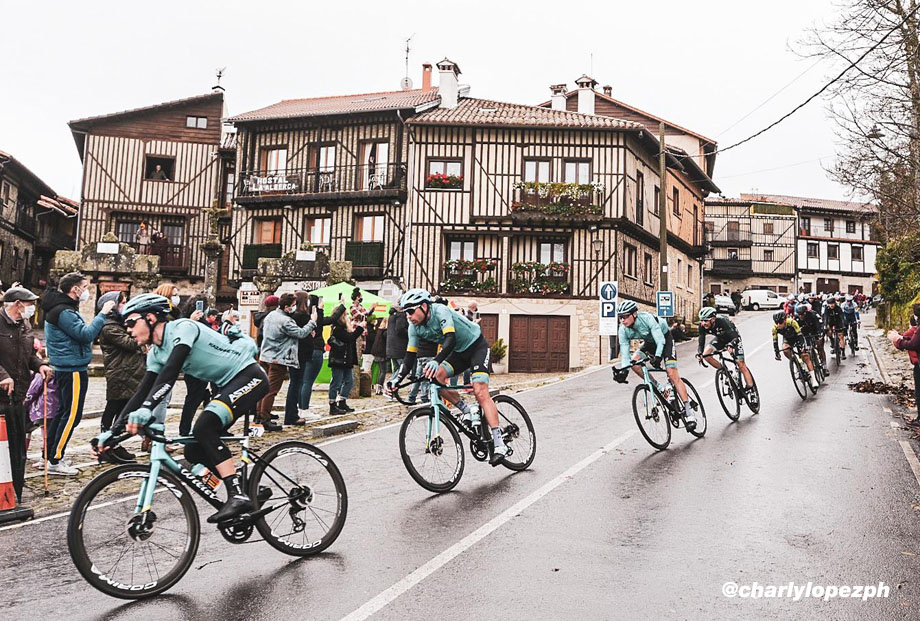 Primoz Roglič may have already won four stages in this Vuelta a España, but at the start of the last mountain stage, the Slovenian knew that he was still not rid of his last two remaining rivals; Richard Carapaz and Hugh Carthy. The Ecuadorian and the Briton would not just bury the hatchet on the Alto de La Covatilla, but before that there was a large leading group at the head of the race. Even before the first climb of the day, 32 riders had already built up a 2 minute lead. 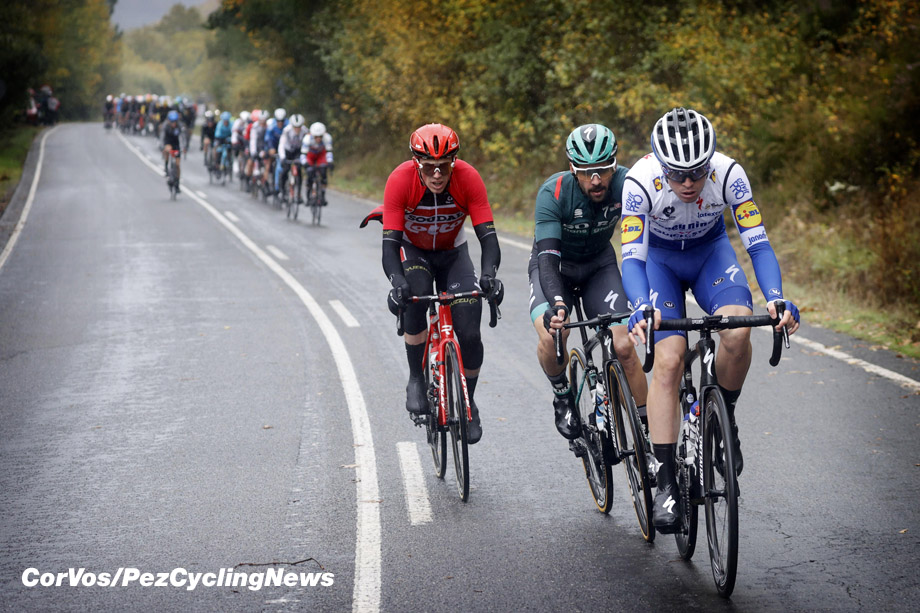 The usual fight for the break 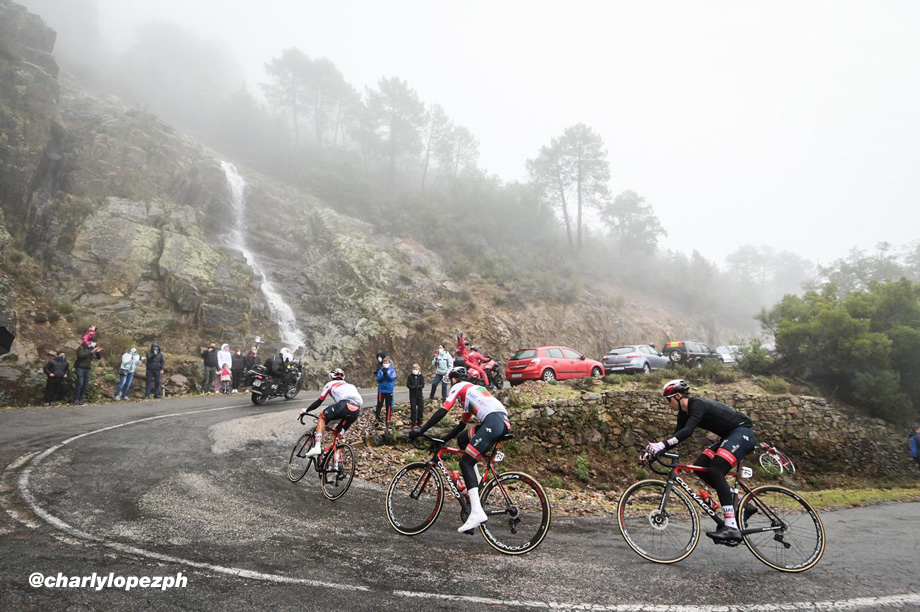 A wet climb early in the stage 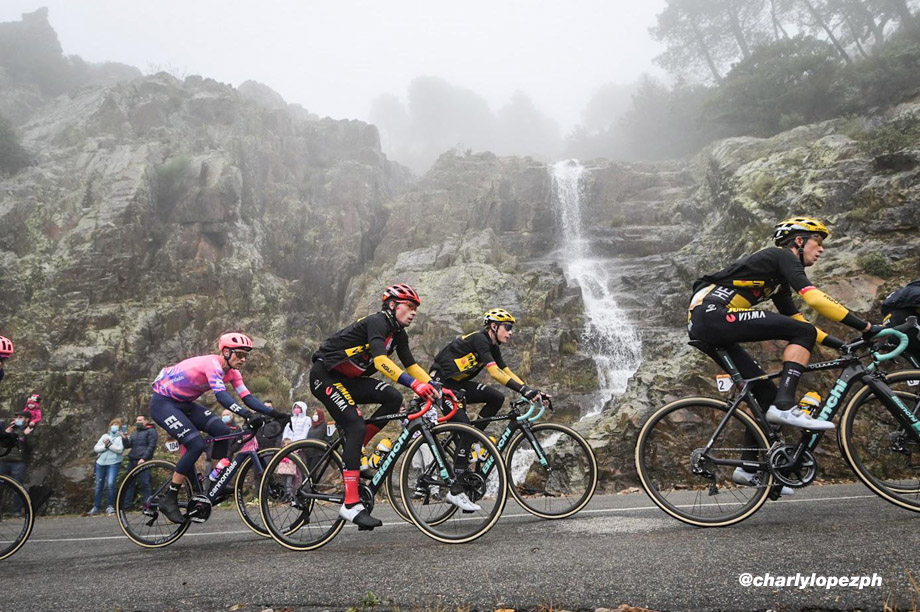 After the Alto Portillo de las Batuecas, Schwarzmann, Sütterlin, De la Cruz Nelson and Ivo Oliveira rode away from the leading group, but their escape was short-lived. The leading group rode the next three Cat-3 climbs together, while the peloton was 4 minutes behind. Jumbo-Visma kept the gap in the leading group limited. Robert Gesink led the dance in the peloton, as is often the case this Vuelta. Movistar also joined the fight. With 60 kilometres to go, the peloton broke for a moment, but the surprised Carapaz quickly managed to reconnect. 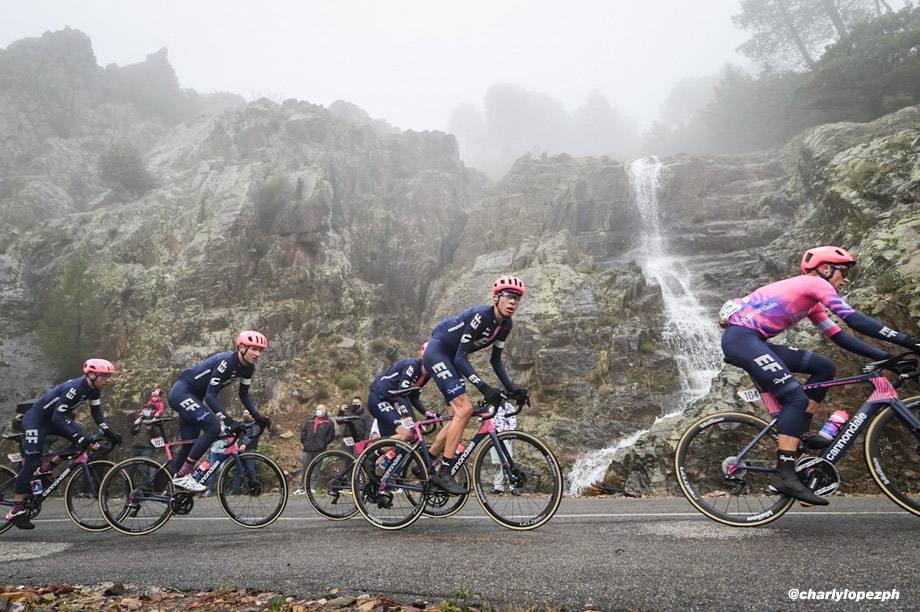 Can Hugh Carthy do something today?

The final started on the Alto de la Garganta, the penultimate climb of the day. The gap to the decimated leading group was first reduced by Movistar to 1:30, after which Marc Soler put in an attack. Imanol Erviti dropped out of the leading group to help the Spaniard, they made the connection in the descent. 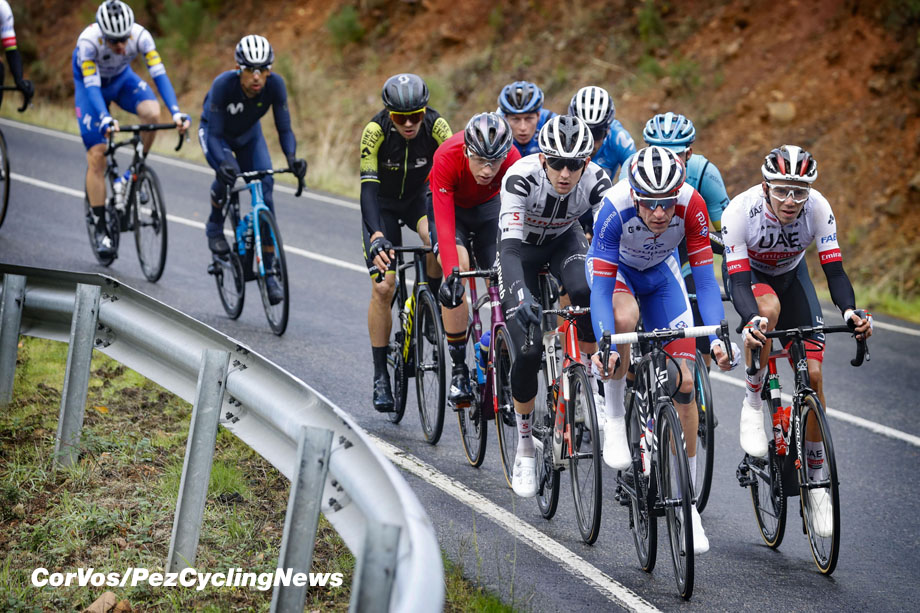 Mark Donovan was in the break

The lead then grew rapidly again. At the foot of the Alto de La Covatilla, it was more than 3 minutes. Gino Mäder, Mark Donovan and Izagirre attacked the group for a 35 second lead. 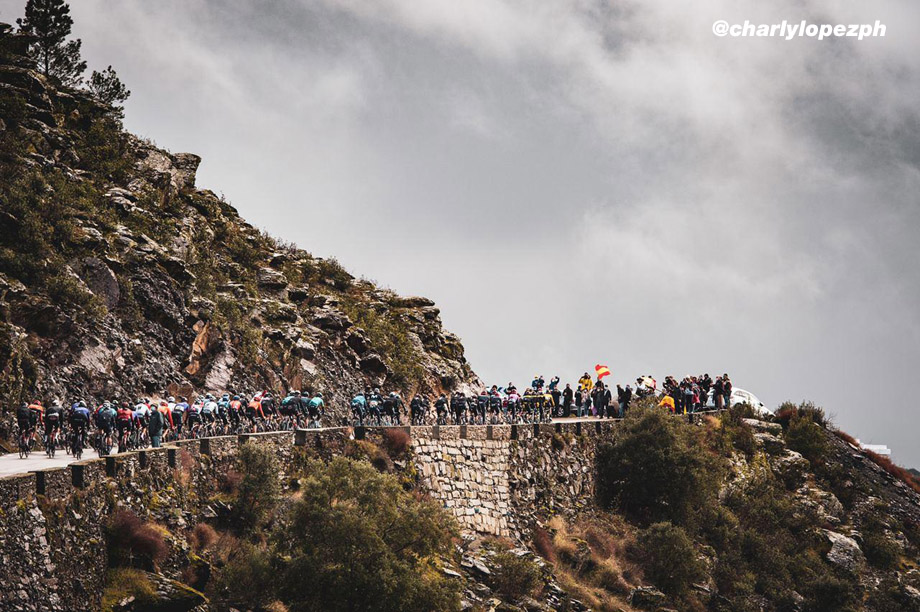 The peloton was not taking it easy

On the way to the ski resort they expanded their lead further and further. Once they got to the steepest parts of the climb, Donovan was dropped. Mäder also had a hard time, but it took a long time before the Swiss rider finally cracked. 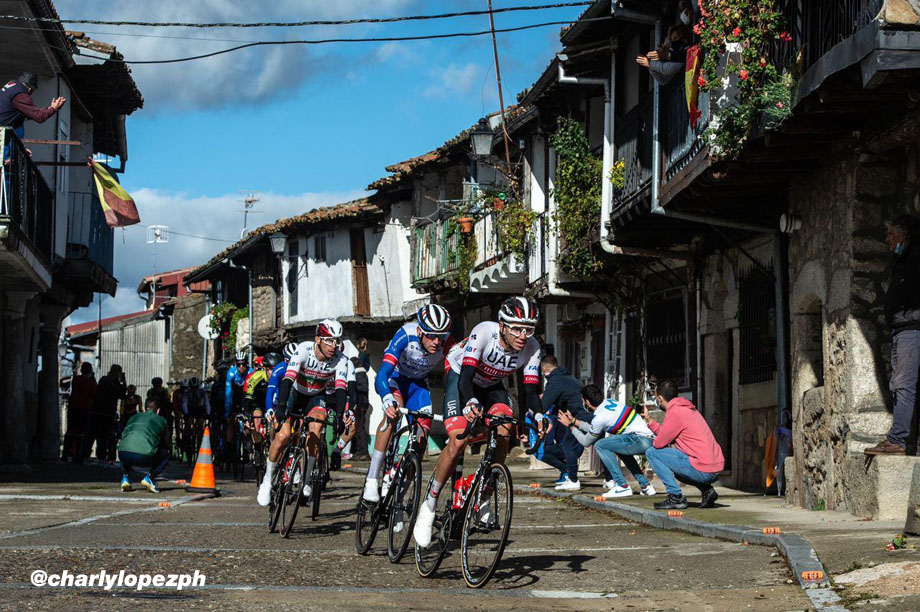 Over 30 riders in the break of the day

Gaudu, meanwhile, steamed up from behind. With 4 kilometres to go, he joined the Spaniard, after which Izagirre was immediately dropped. Gaudu only had to keep the tough Mäder behind for the remainder of the stage. That worked, after which Gaudu celebrated his second Vuelta victory a week after his first. 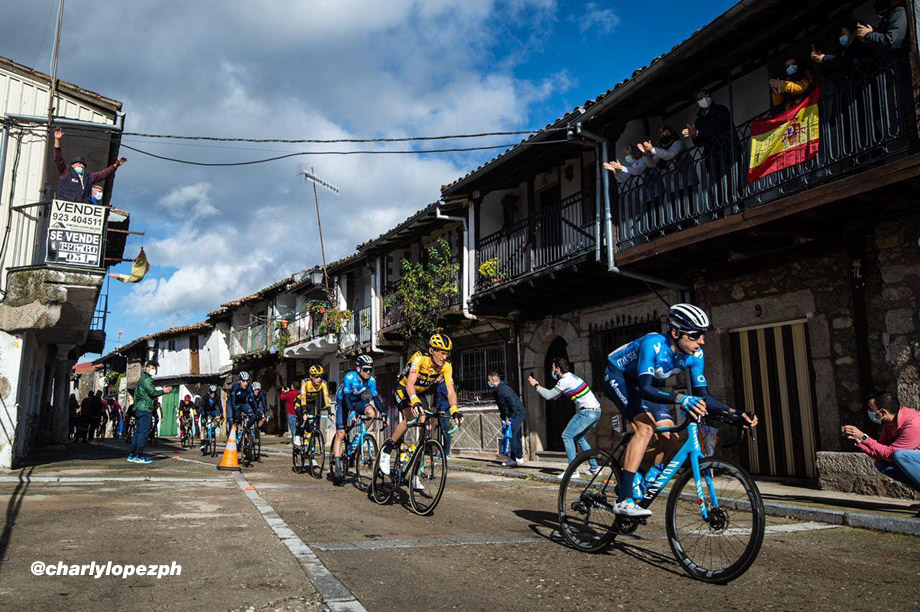 Movistar could do with a result

In the battle for the overall victory, the favourites held their cards to their chests for a long time. A strong Ide Schelling kept the group of favourites together with his pace for quite some time, but at 4 kilometres from the finish there was an attack. Hugh Carthy was not going to give up his hopes in this Vuelta. 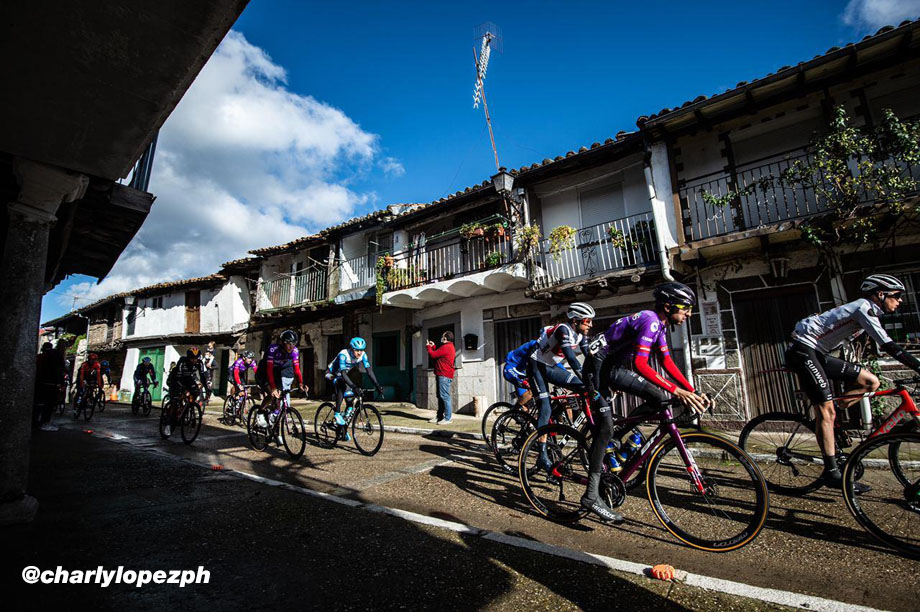 The race and the weather started to warm up 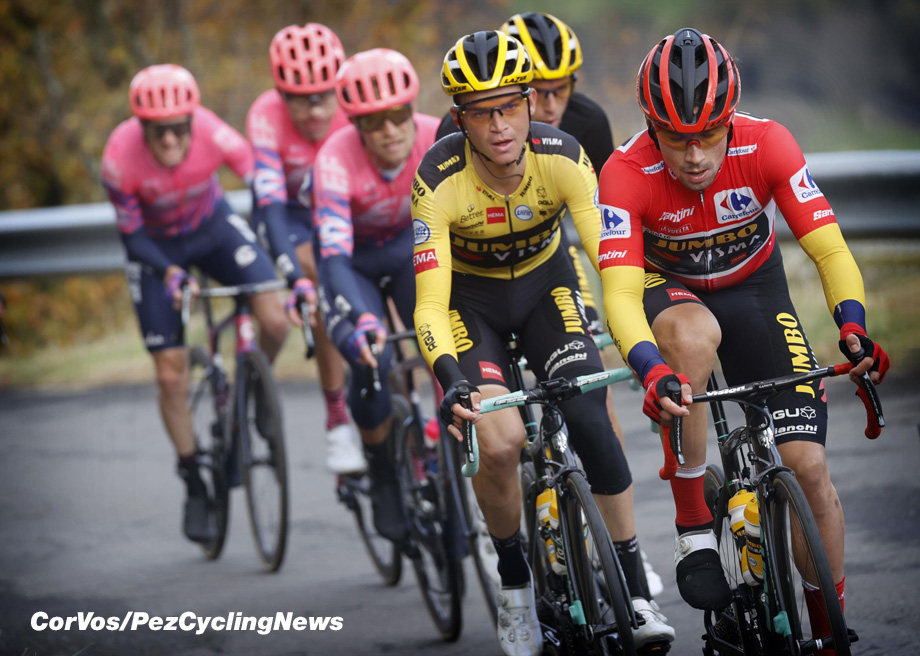 Roglič was the get a fright later in the stage

The Briton shattered the group of favourites, but Roglič held on well. At 2 kilometres from the finish, Carapaz made his move, then the Slovenian cracked a little. Carapaz rode off little by little, but ended up falling short to win the Vuelta. Roglic ended up with only a 24 second advantage, but he has won his second Vuelta a España, if all goes to plan on the road to Madrid on Sunday. 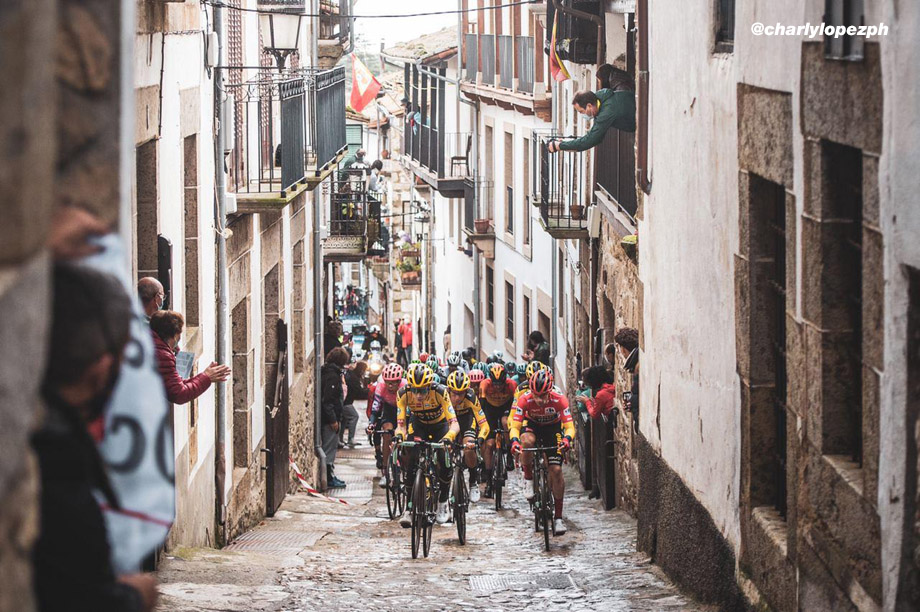 Roglič climbing up through Candelario 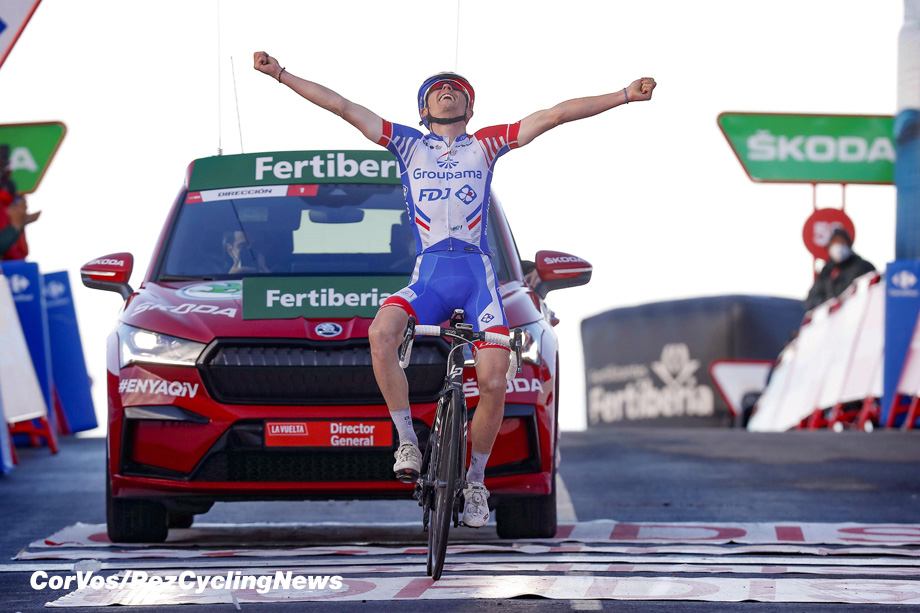 Stage winner, David Gaudu (Groupama-FDJ): “Bruno [Armirail] has been amazing again. There are no words for the work he puts in. Right now, he’s one of the best teammates in the world with what he does. In the end, I had to go all in. I was afraid they might come back and then I was able to accelerate again in the last kilometre. I wanted to go past my rivals quickly to make sure they couldn’t shelter. It’s awesome. I was thinking about it this morning. Tim Wellens has won two stages, Ben King did it also two yeas ago. Thibaut [Pinot] won two stages last time he came to La Vuelta so I thought ‘why not you’. I love these weather conditions. It’s incredible. Two stage wins and the top 10 overall, La Vuelta was already a success and this is even better.” 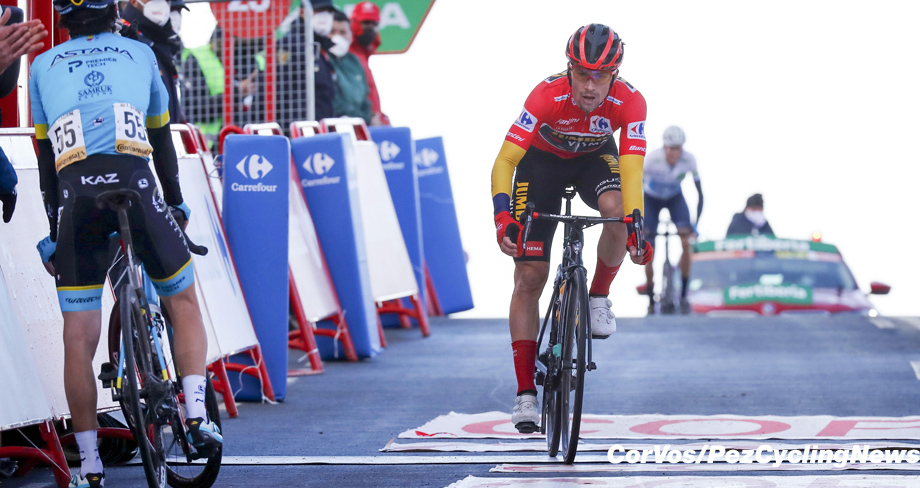 Overall and points leader, Primoz Roglic (Jumbo-Visma): “It’s always good to have an exciting finish and that was exciting! I had just enough to know that I went with my own tempo it would be enough. In the end, it’s all good. I wasn’t really always under control but you need to stay calm and do your thing. [Lennard Hofstede] really helped me. Again, it was a really nice job from the whole team, riding full gas from the start. I’m super happy [to win La Vuelta]. It’s a really nice way to finish the season.” 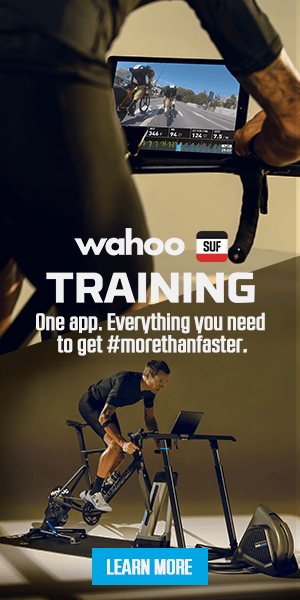