Vuelta Stage Report: Dan Martin (Israel Star-Up Nation) won the third stage of the Vuelta a España 2020. The Irishman crossed the finish line first after a 166 kilometre long mountain stage with the finish at La Laguna Negra. He was the strongest sprinter from an elite group. Primoz Roglič (Jumbo-Visma) came in second, ahead of Richard Carapaz (INEOS Grenadiers). 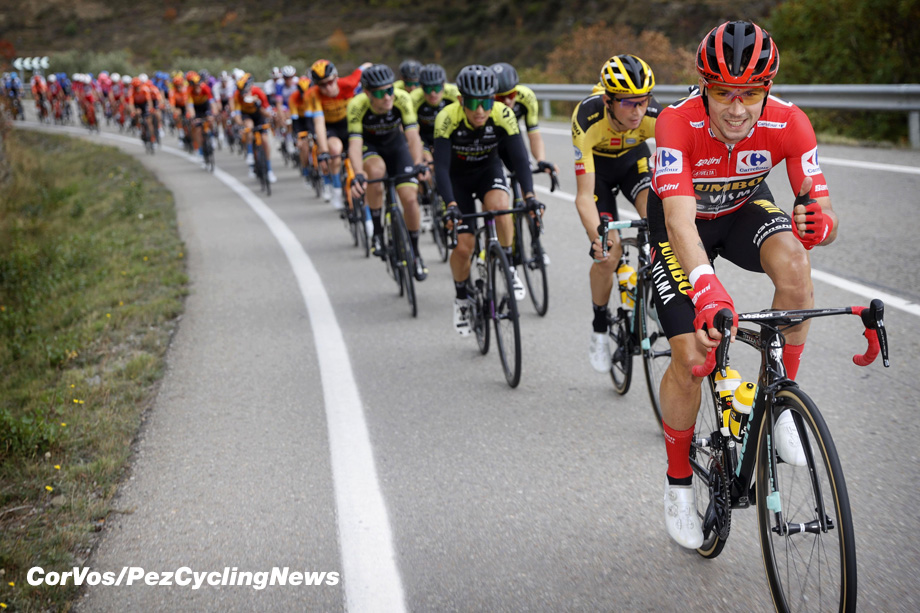 The summit finish didn’t disappoint with a battle of the big names of this Vuelta a España fighting it out in the last metres. Dan Martin crossed the line first ahead of the overall leader, Primoz Roglič and Richard Carapaz.

Stage 3. Lodosa – La Laguna Negra-Vinuesa 166,1 Kilometres
The riders are gearing for more uphill challenges with a summit finish at La Laguna Negra – Vinuesa atop a cat-1 climb: 8.6km at 5.8%. 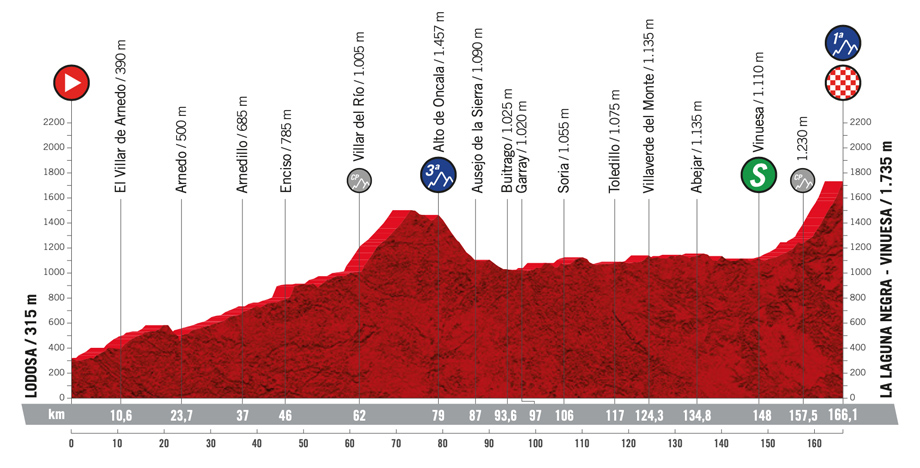 Fernando Escartín’s Comment: “The differences in the general classification will begin to result in the first breakaways with an option to win. The unprecedented finale will be for strong riders and will largely depend on how the leading riders’ teams manage to control those breakaways. The finish-line is located on the summit of a 1st category climb where differences are expected to be minimal.” 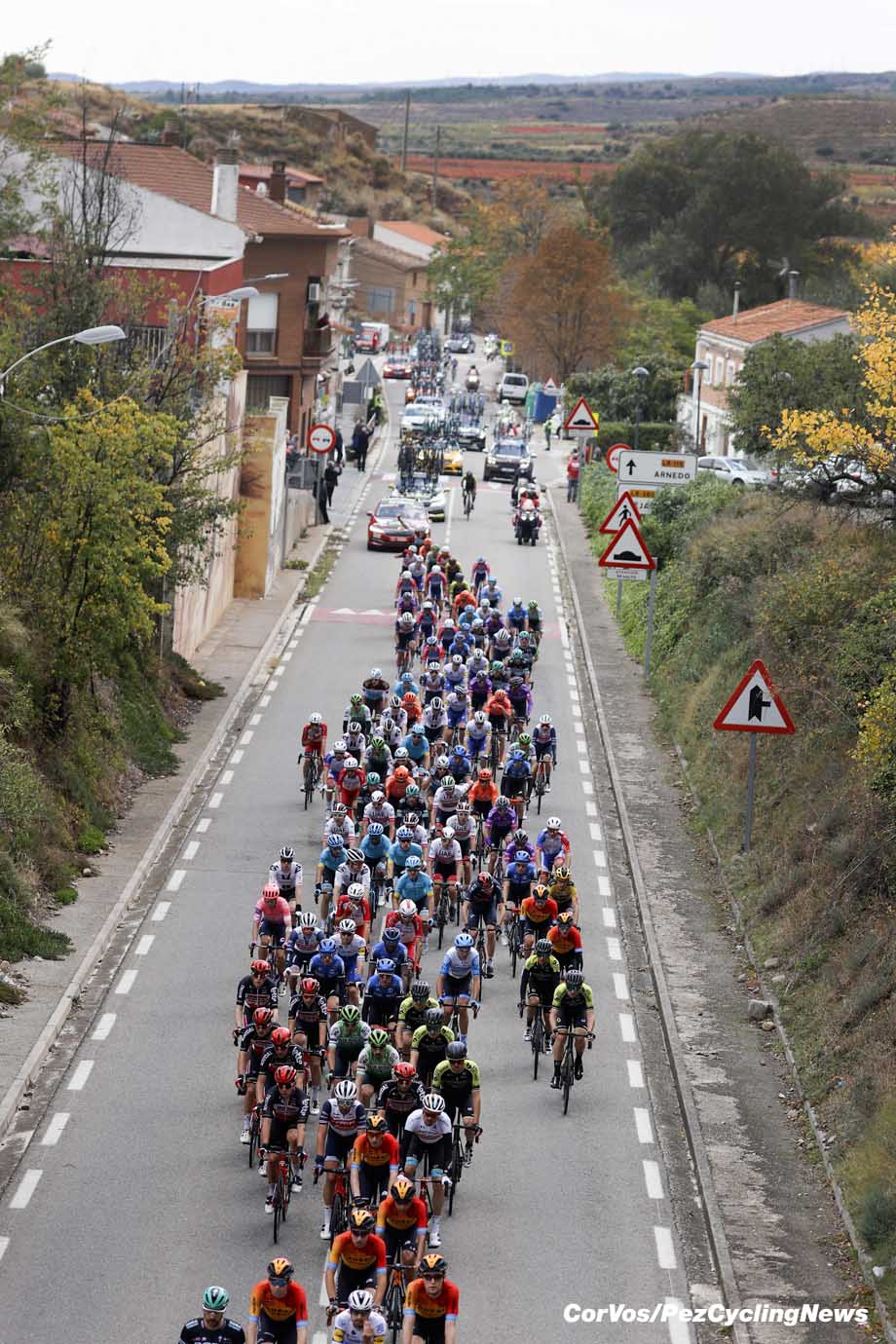 Another tough day in the north of Spain

In a stage with a lot of wind and rain, five riders attacked shortly after the start. Niki Terpstra (Total Direct Energie), Mark Donovan (Sunweb), Tosh Van der Sande (Lotto Soudal), Aritz Bagües (Caja Rural-Seguros RGA) and Willie Smit (Burgos-BH) and soon had a lead of 3:40. Jumbo-Visma thought it was enough and made sure that the difference would not become more than 4 minutes. 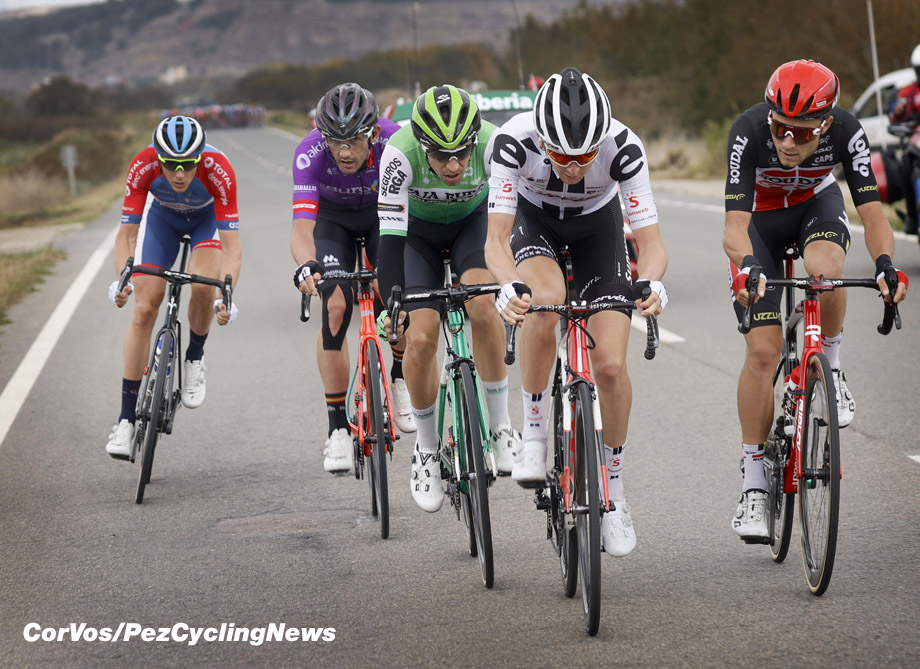 Van der Sande was the first to top the Puerto de Oncala. In the valley towards the final climb, Astana and Movistar took over the work, which meant that the lead of the front group disappeared. After a break of 110 kilometres, they were caught as they entered Soria with 60 kilometres to go. 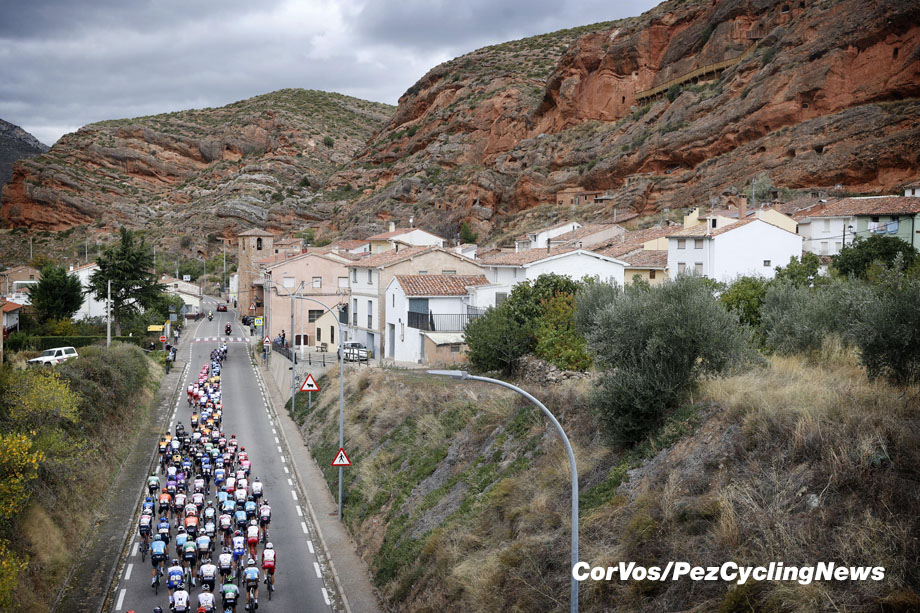 A new group of five riders attempted to escape. Valentin Ferron and Paul Ourselin (Total Direct Energie), Hector Saez (Caja Rural-Seguros RGA), Angel Madrazo and Jesus Ezquerra (Burgos-BH) managed to get a minute and a half lead. On the misty final climb, the escape was caught at 7 kilometres out. That was the signal for INEOS to take over from Movistar. Chris Froome put himself at the head of the peloton in the service of Carapaz. Soler and Chaves both had mechanical problems. 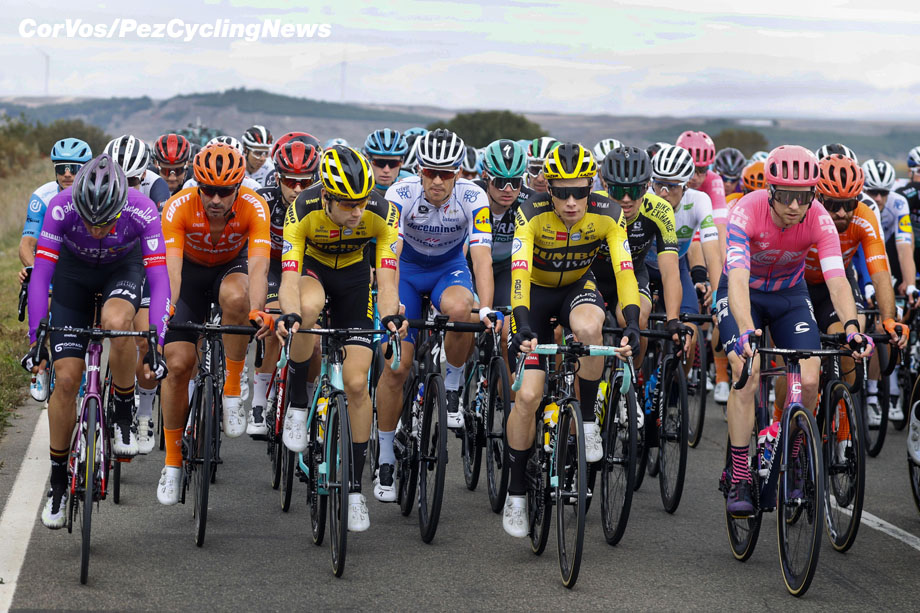 The peloton was slow to chase 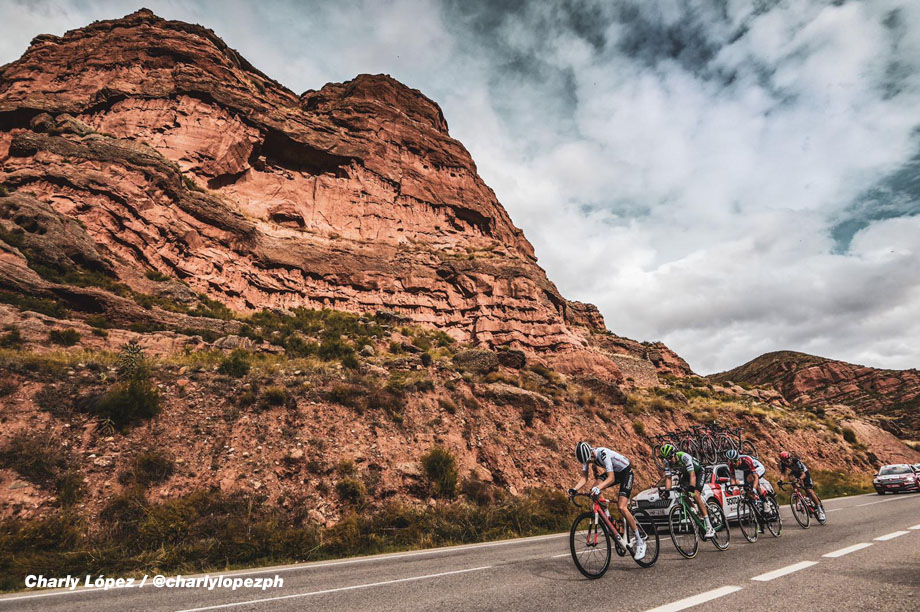 The second break of the day

Kenny Elissonde tried to break free at 2.7 kilometres from the top, but his attempt was short lived. Just before the start of the final kilometre, Clément Champoussin accelerated. Felix Großschartner closed the gap, after which Sepp Kuss tried. He was caught, after which a select group would sprint for the win. 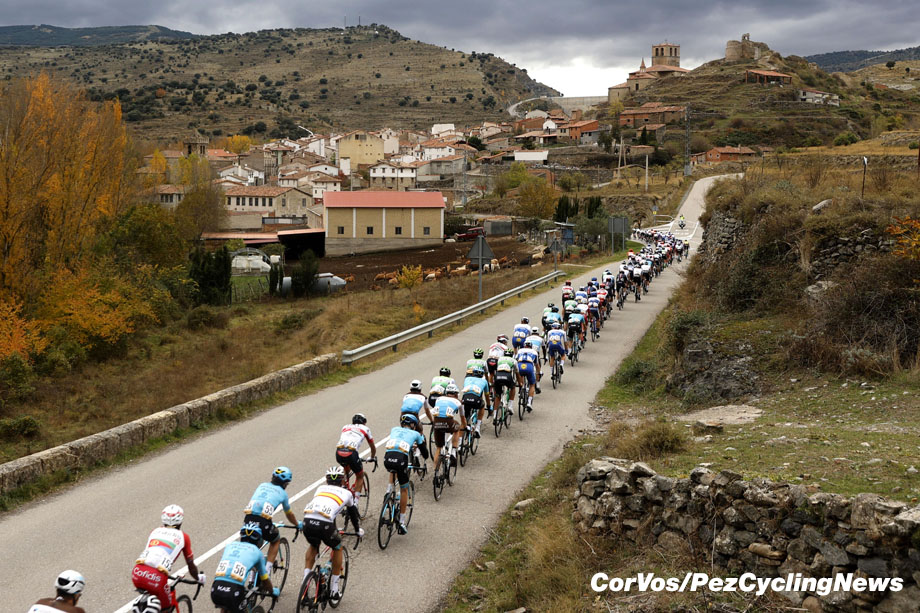 Rain on the horizon

Dan Martin went a long way out and did not give up his lead. The Irishman was able to celebrate a victory for the first time since June last year. Primoz Roglič finished second. Martin is closer on the general classification ahead of Carapaz. The Slovenian will lead tomorrow in the sprinters stage to Ejea de los Caballeros. 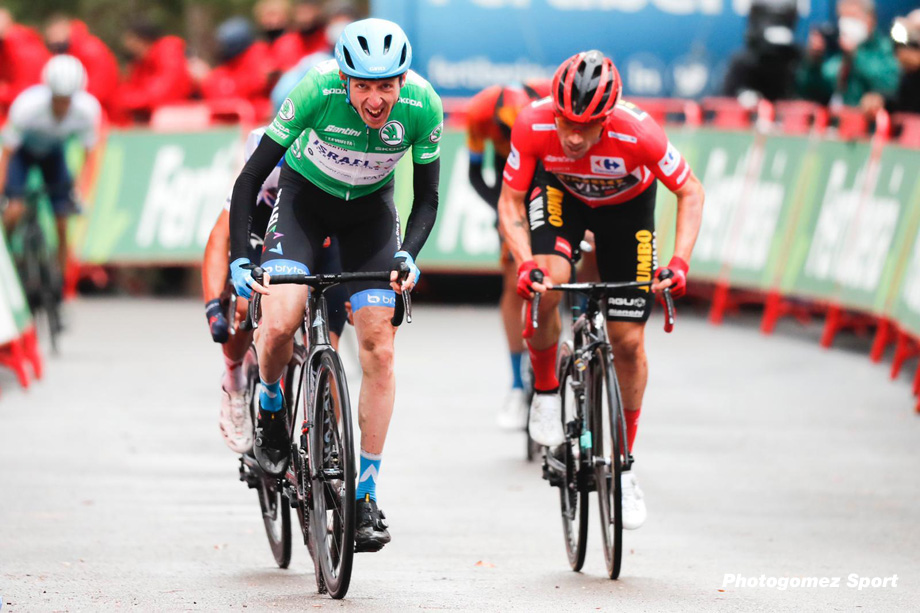 Dan Martin was too good for Roglič

Stage winner, Dan Martin (Israel Start-up Nation): “I’ve come so close to winning this year and I really wanted to win a stage for this team because they’ve been so good to me. Obviously we couldn’t do it with the injury in the Tour but we were determined to win today and the team was amazing. Every single one of them played a part in today’s victory. It’s part for them and part my wife also, because it’s the first time I win since my kids were born.”

Overall leader and second on the stage, Primoz Roglic (Jumbo-Visma): “It was not an easy day, with quite some wind again, the rain and a hard climb. The team did a great job and I’m happy I was close. It’s a nice day for us. It was a fast finish with a lot of attacks in the end. Dan [Martin] was the strongest and he deserves his win.”