The break goes all the way

Vuelta Stage Report: Tim Wellens won stage 5 to Sabiñanigo on Saturday. The Lotto Soudal rider was the strongest in a leading group of three at the end of 184.4 kilometres. Guillaume Martin (Cofidis) finished second, ahead of Thymen Arensman (Sunweb). Primoz Roglič (Jumbo-Visma) was fourth and held the overall lead. 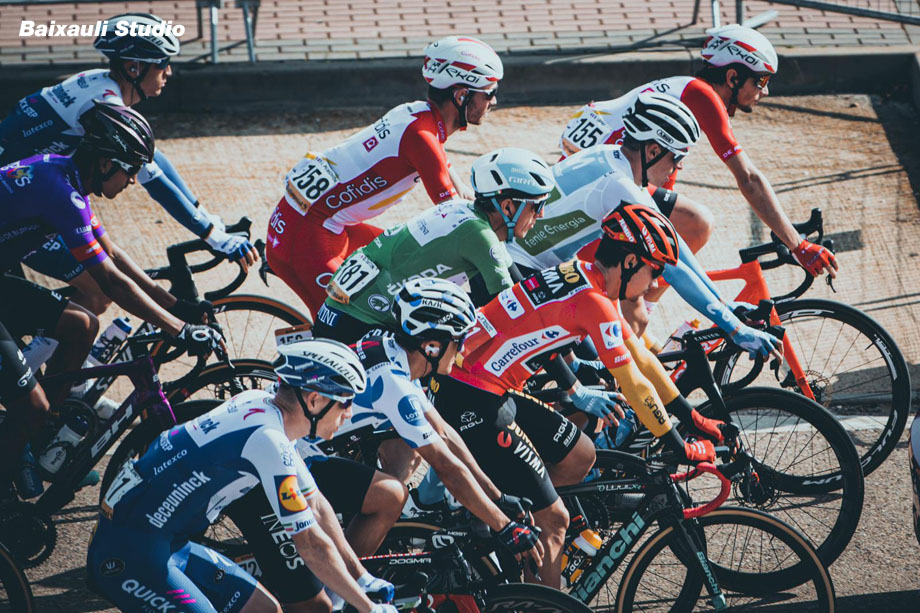 Primoz Roglič leads the peloton out of Huesca

Stage 5. Huesca > Sabiñánigo – 184,4km
The sprinters had their shot to shine on day 4 but the peloton face more uphill challenges on day 5, with three categorised climbs in the final 75km towards Sabiñanigo.

Fernando Escartín’s Comment: “185.5 km with two climbs, one 2nd category and one 3rd category in the stage’s final 60 km. This tough succession of climbs will whittle down the riders and allow just a small group to fight for victory.” 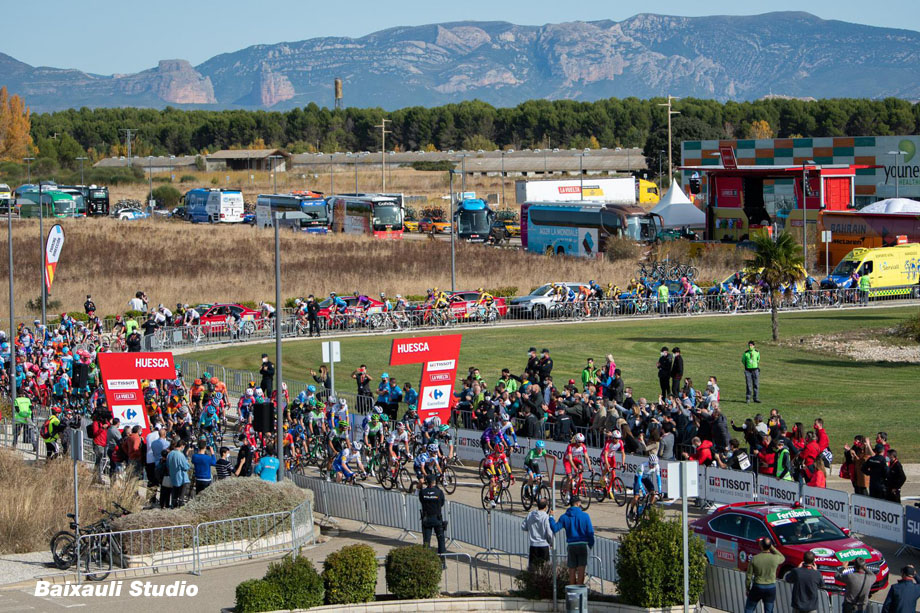 The stage 5 start – without fans

This transition stage was made for escapes and there were many attack attempts in the opening kilometres. Sunweb had with three riders in a break of fourteen, which was kept close by the peloton. For once, Caja Rural-Seguros RGA and Burgos-BH had missed the move. 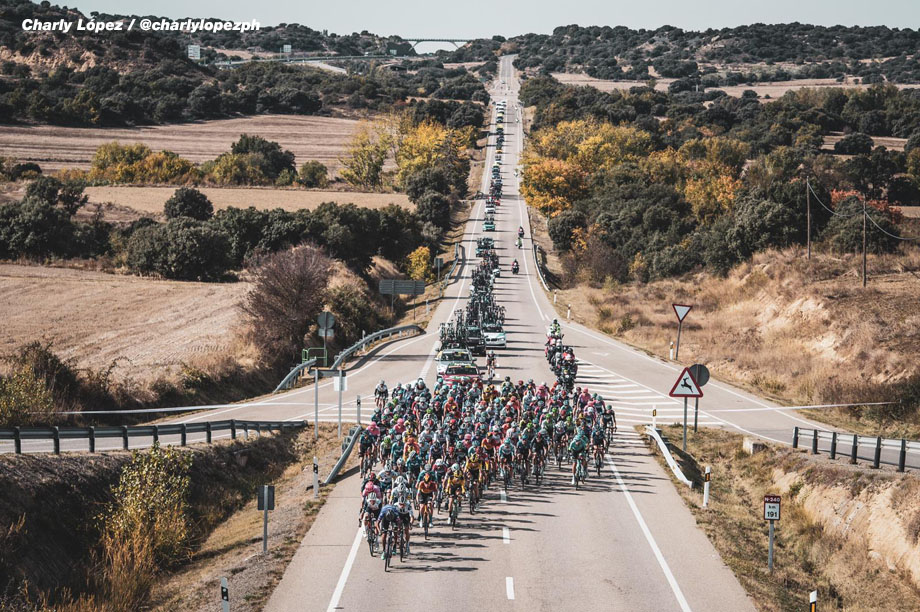 Crosswinds could be a big problem 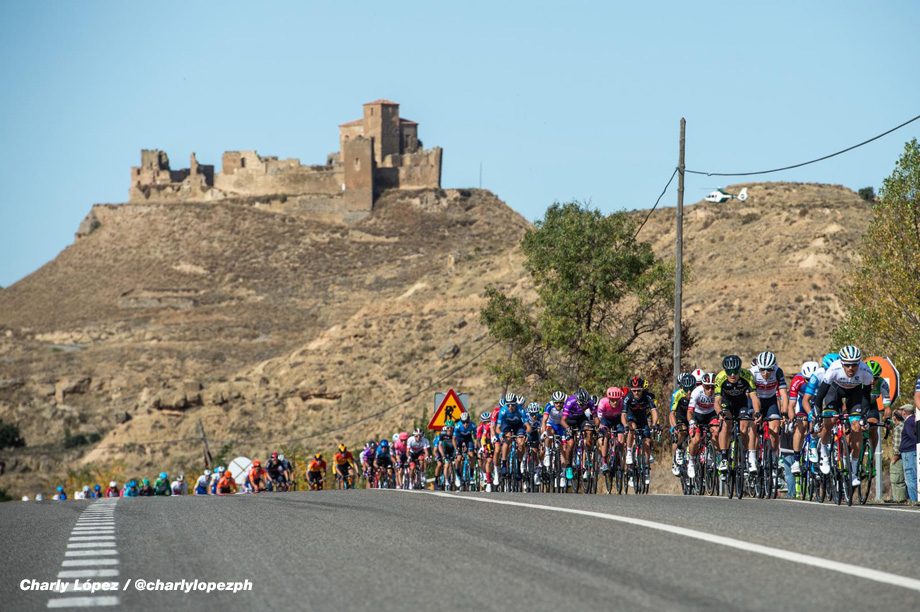 Lots of castles in Spain 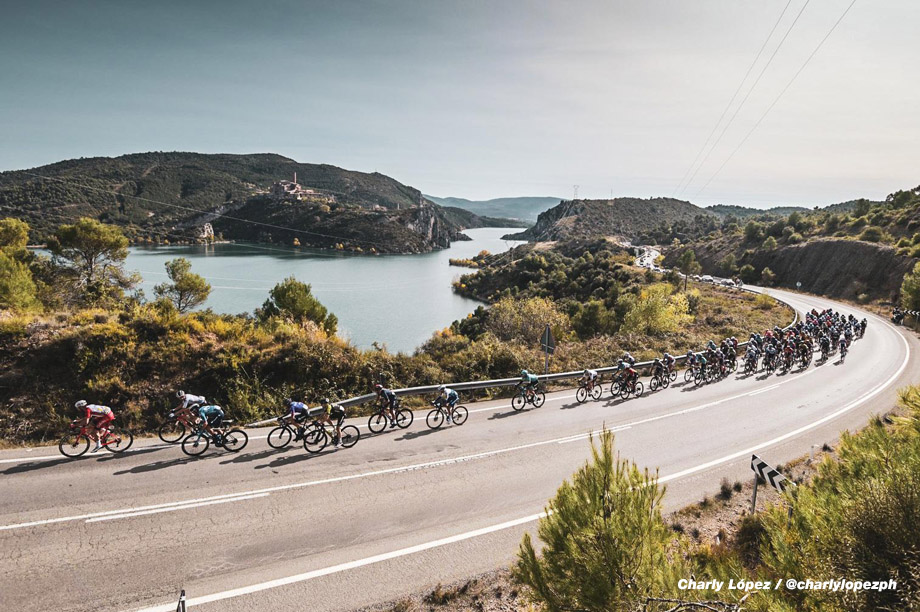 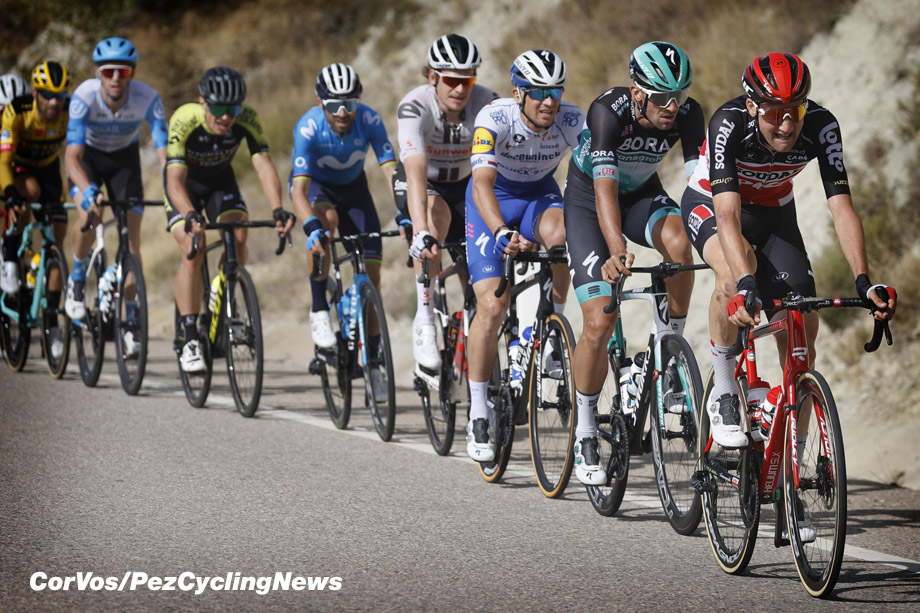 Was part of the first big break

Shortly afterwards, Arensman jumped away with Wellens, after which the two started the Alto de Vio together. The Frenchman Martin managed to catch them. Wellens was first at the top, which he repeated on the Alto de Fanlo. The leading trio had a lead of 3:50. 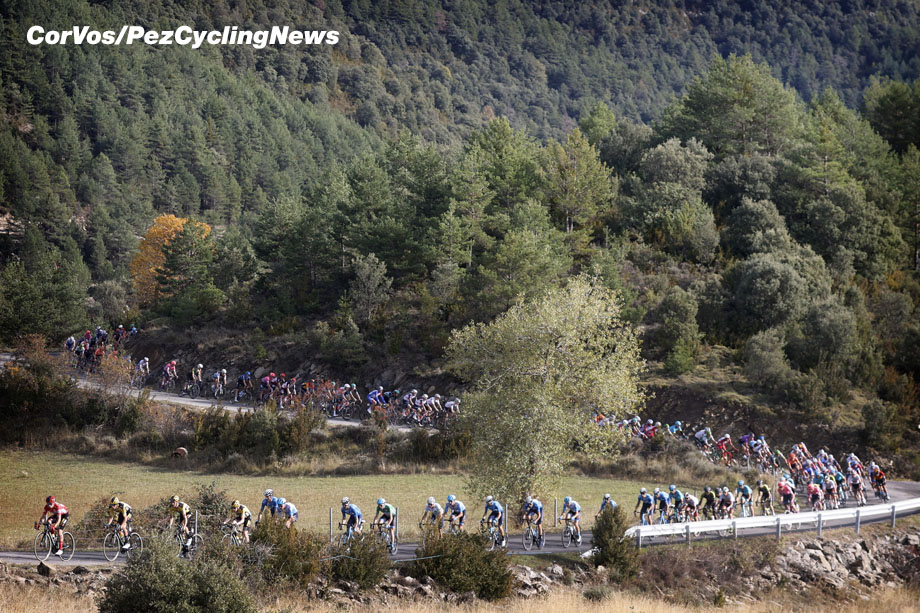 The peloton didn’t chase too hard

During the climb of the Alto de Petralba, Total Direct Energie started to pull the peloton. The lead decreased, but the French team could not prevent the three from crossing the summit first. The points were again for Wellens, so he took the lead in the mountains classification from Richard Carapaz. 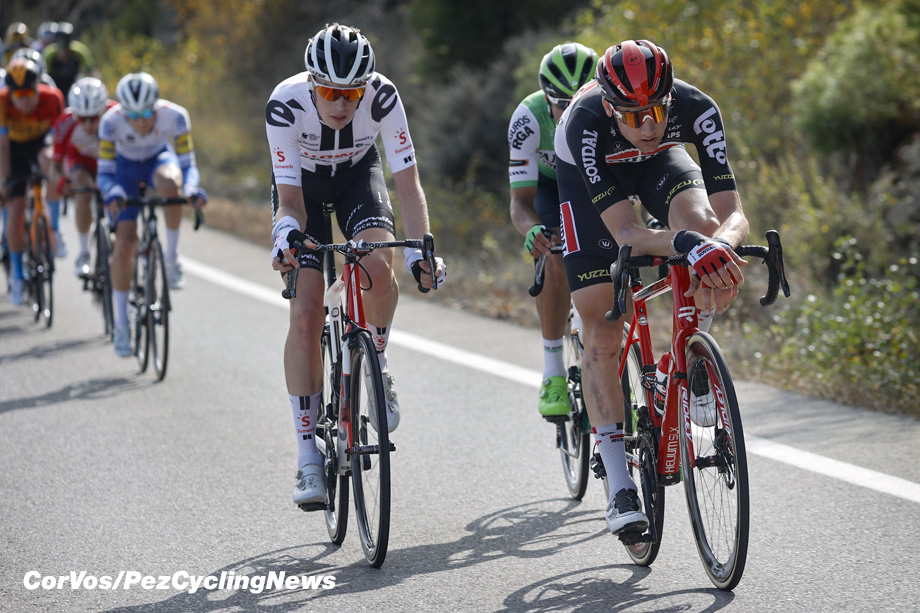 Wellens was the most active rider of the break

On the descent towards Sabiñanigo, the three continued to work well together, so they would compete for the stage victory. Arensmaan placed a surprise attack a kilometre from the finish, after which only Wellens could follow, although Martin got back with a fight. 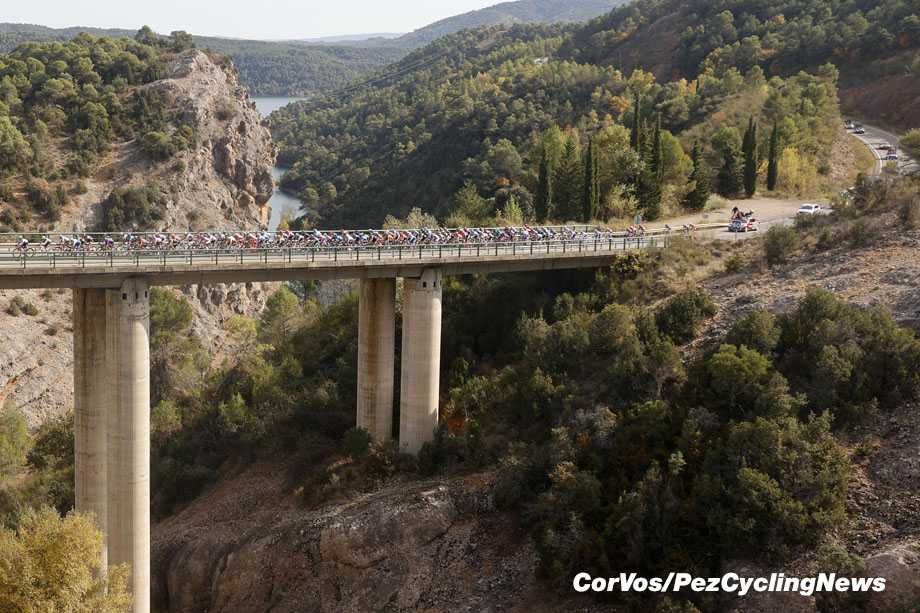 Were the GC men saving themselves for Sunday?

Wellens started the sprint on the uphill finish straight. Arensman couldn’t compete and a jump from Martin was pulled in. Wellens was the first to cross the finish line to win another Grand Tour two years after his last stage victory in the Giro. The sprint from the peloton was won by Primož Roglič. He took some extra seconds on second placed Daniel Martin, who was also involved in a crash in the final kilometre. 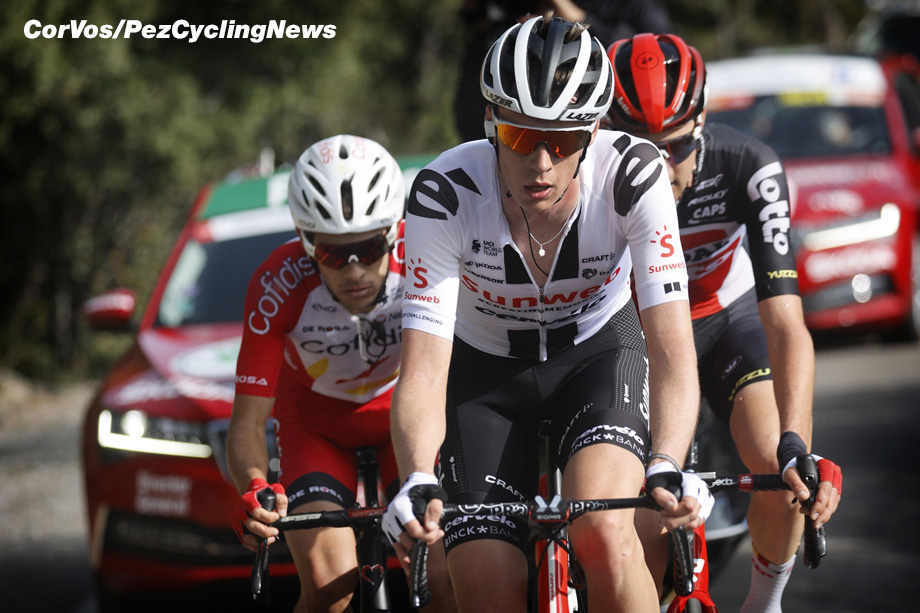 Stage winner, Tim Wellens (Lotto Soudal): “It feels super good. I had a very difficult period because I had a big crash before the Tour de France. There are no ups without downs. It makes this victory even better. Today was a special day because we raced for two hours before the break was gone. It was super hard. And then we were lucky enough to go for it with three riders at the front,. The cooperation was super good. We were about at the same lead but I got the victory in the end. It was the team goal for La Vuelta and now we can ride with less stress and maybe get another victory with myself or my teammates. I was not so confident because I had the impression we were about as strong. I was surprised when Guillaume Martin stayed a bit behind after the first attack. And I went full gas to the line.” 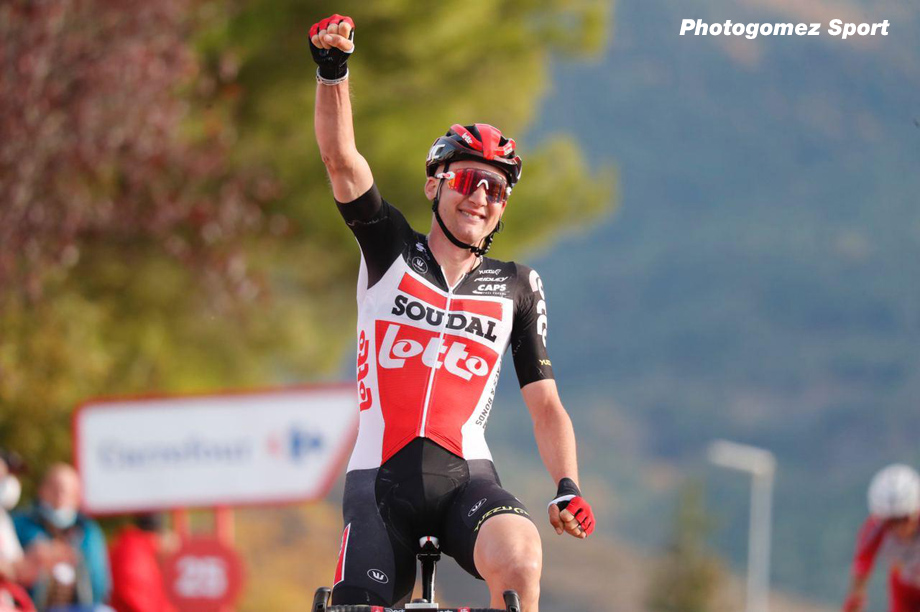 Overall leader, Primoz Roglič (Jumbo-Visma): “Today was a fast and hard stage. There isn’t much to say about it. It was a fast hard start but our guys were always on top of the game. It was a long fight for the breakaway and finally they went. Sepp [Kuss] was there. The last 500m were hard too. It’s another day behind us and I’m happy. [Kuss] can win! He’s in a great shape and we work together. In the end, it really doesn’t matter if he wins or I win, if we can win. We all do our best and then we can be proud about it.”