Vuelta Stage Report: A day of wind and attacks in northern Spain. The finalé of stage 7 into Villanueva de Valdegovia was a crazy affair of attack and counter attack from the leading group. In the end it was Canada’s Michael Woods (EF Pro Cycling) who held the lead to the line after he made his move in the last kilometre. Omar Fraile (Astana) was second and Alejandro Valverde (Movistar) third. The GC stayed much the same. 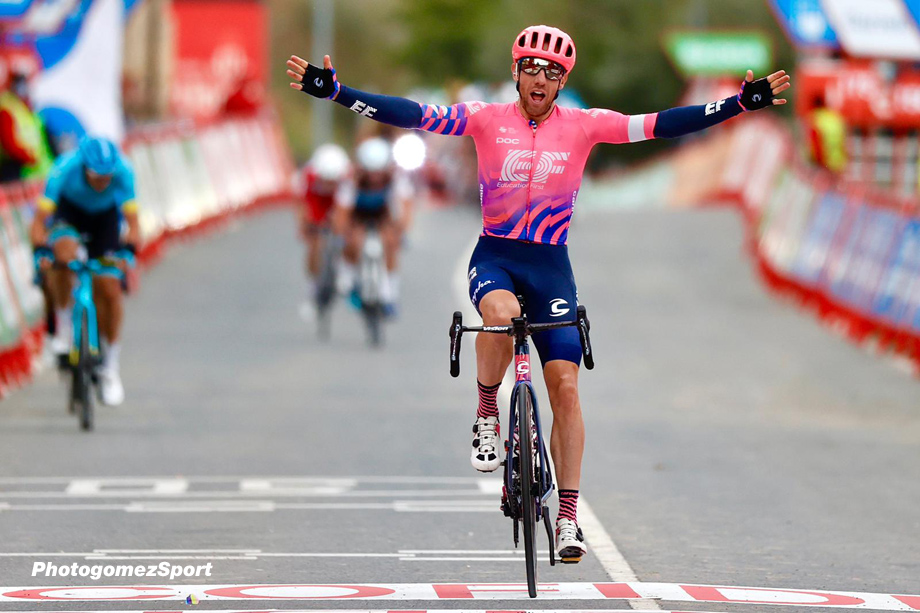 Michael Woods won the seventh stage of the Vuelta a España. The Canadian was part of a large break and, after a spectacular final, was the first to cross the finish line, ahead of Omar Fraile and Alejandro Valverde. Richard Carapaz held the red leader’s jersey. 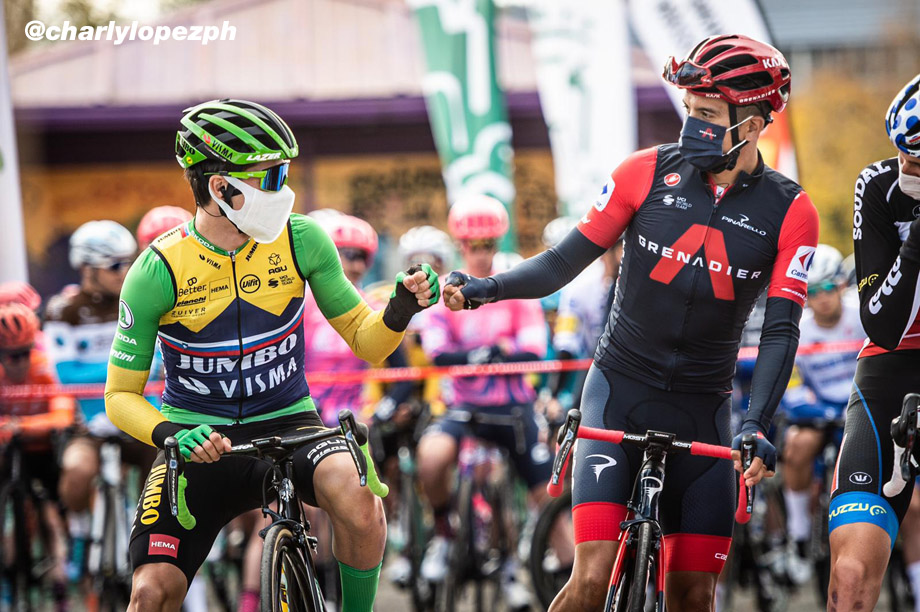 Primoz Roglič and Richard Carapaz at the start

Stage 7. Vitoria-Gasteiz > Villanueva de Valdegovia – 159,7km
The peloton returns to action after the rest day with another explosive stage featuring two ascents up the cat-1 Puerto de Orduña. La Vuelta is back in Vitoria-Gasteiz, five years after the last stage start from the capital city of Alava. In 2015, the race headed to Alto Campo where Alessandro De Marchi claimed victory. The province of Alava has also welcomed 18 stage finishes, all of them in Vitoria. It’s the first time in la Vuelta history that the stage finishes in Villanueva de Valdegovia.

Fernando Escartín’s Comment: “The day includes two climbs of the Alto de Orduña (Cat 1), with an inclination of up to 14%. The final climb will take place 18 km from the finish-line so the differences obtained on the summit will be key. Any rider that loses time will be adversely affected as the remaining stretch towards the finish-line will allow the head of the race to make a big difference to the general classification.” 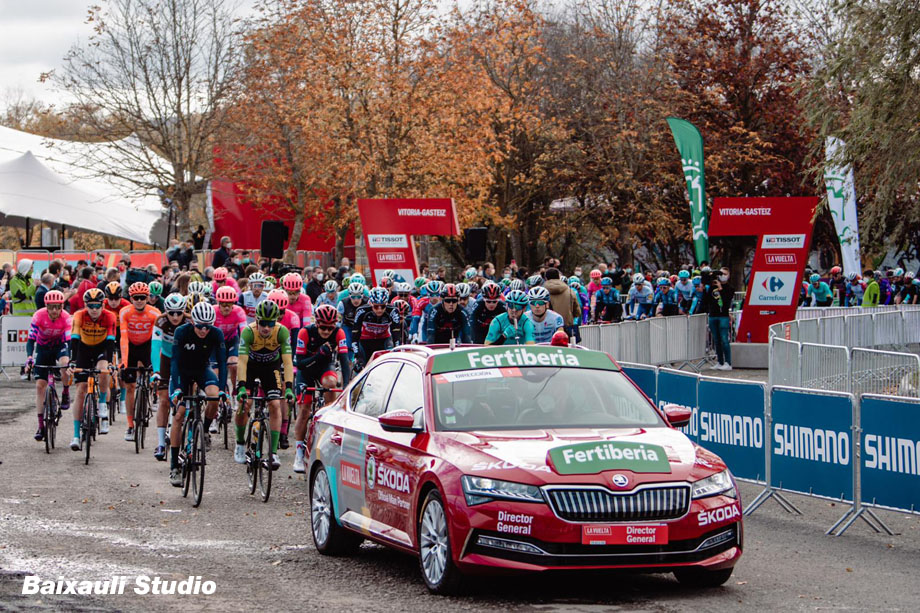 A cold and windy stage 7

Rémi Cavagna was the first rider to make a gap after a very fast opening part of the race. The Deceuninck – Quick-Step French fast-man had to work very hard for a limited lead and was caught not much later by the peloton. This was the signal for several other riders to attack, in the hope of an early start on the climb of the Puerto de Orduña. A strong leading group, including Sepp Kuss, Rui Costa, Alex Aranburu, Niki Terpstra and Ide Schelling had a lead of 1:30 on the steep ramps of the Orduña. In the peloton, INEOS Grenadiers, for red jersey wearer Richard Carapaz, tried to hold the leaders. On the Puerto de Orduña the race broke up again. 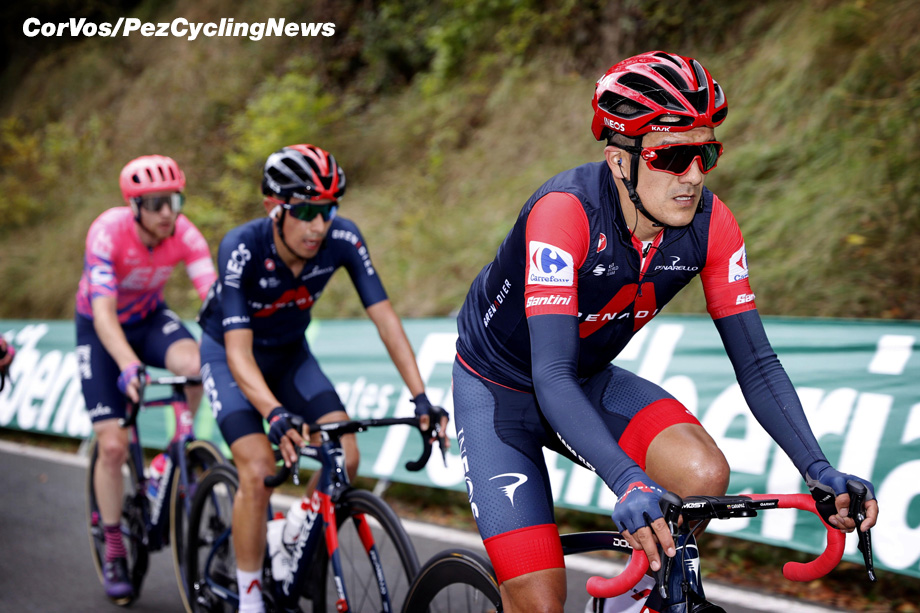 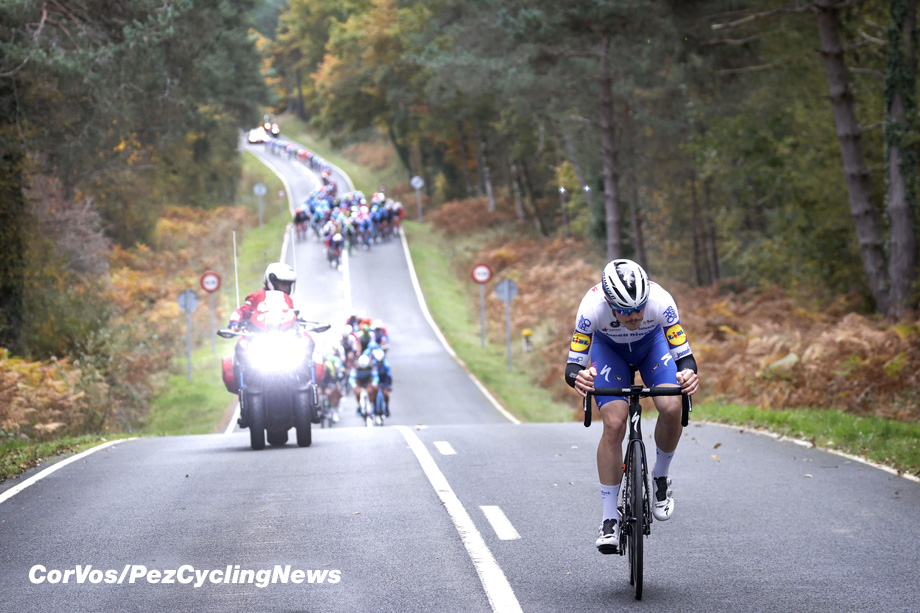 Quite a few riders tried to make the crossing uphill to the leading group. George Bennett and Alejandro Valverde were the big names in the break. The lead group at the top of the Puerto de Orduña consisted of more than 30 riders, while INEOS Grenadiers had to pull out all the stops in the thinned-out peloton to keep the difference as small as possible. Kuss was the first to reach the top of the Orduña to collected 10 points for the KOM jersey and was the virtual leader for a while. Guillaume Martin was good for six mountain points, while KOM leader Tim Wellens took nothing at the top of the Cat 1 climb. The peloton was a minute and a half later and had to chase all day long. 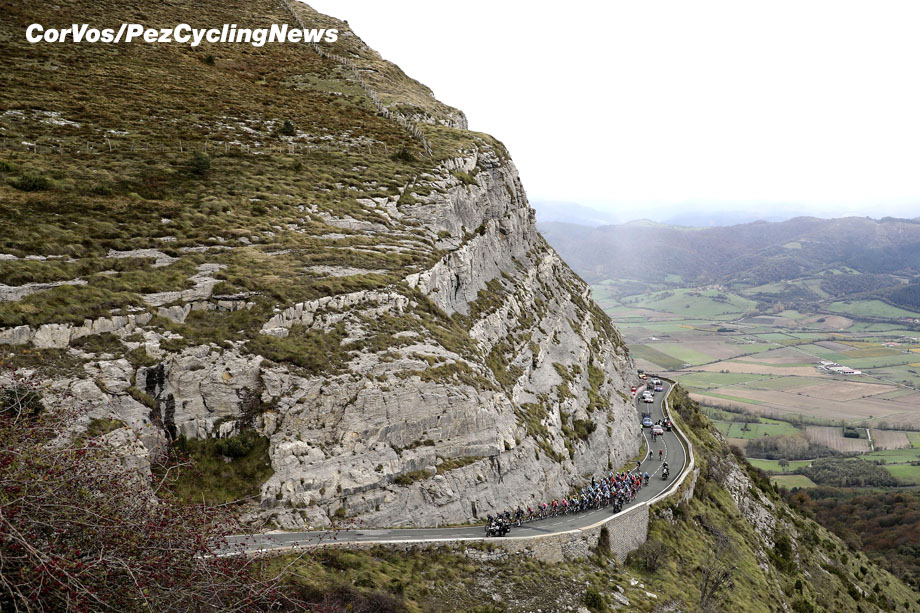 No easy roads round here

Different teams had several men in the front, which was very interesting from a tactical point of view. The best placed rider in the leading group was Alejandro Valverde. The 40-year-old Spaniard, who was the Vuelta winner 11 years ago, was 10th just 3 minutes from leader Carapaz and hoped to take over the red jersey. The Movistar rider was very active and decided not to wait for his fellow escapees. 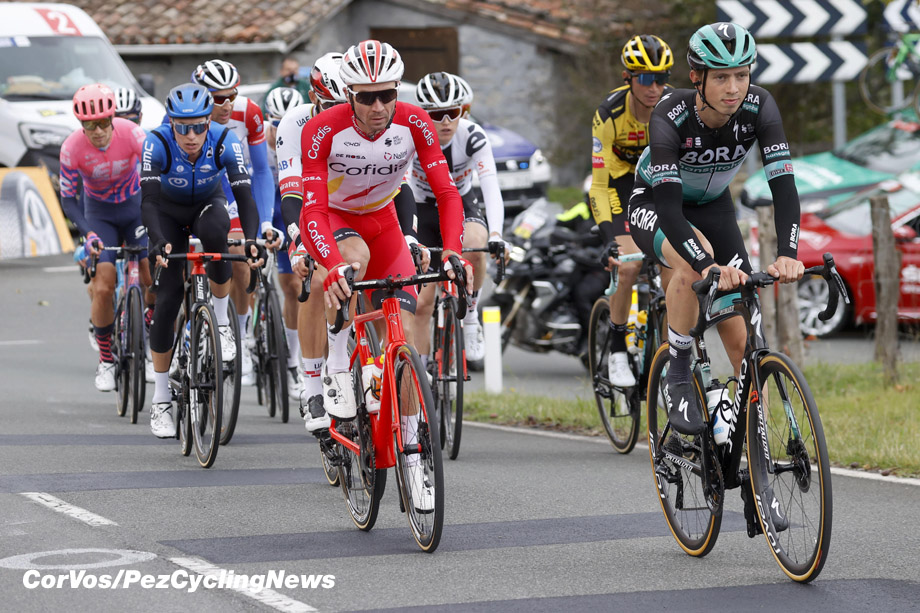 Valverde managed to get away from the large leading group together with Dorian Godon and Stan Dewulf, but the lead of the three attackers was limited to 20 seconds. Valverde saw that it was pointless and allowed himself to be pulled in again and Dewulf and Godon were also brought back before the second passage of the Puerto de Orduña. The chaff was then separated from the wheat on this nearly eight-kilometre climb. 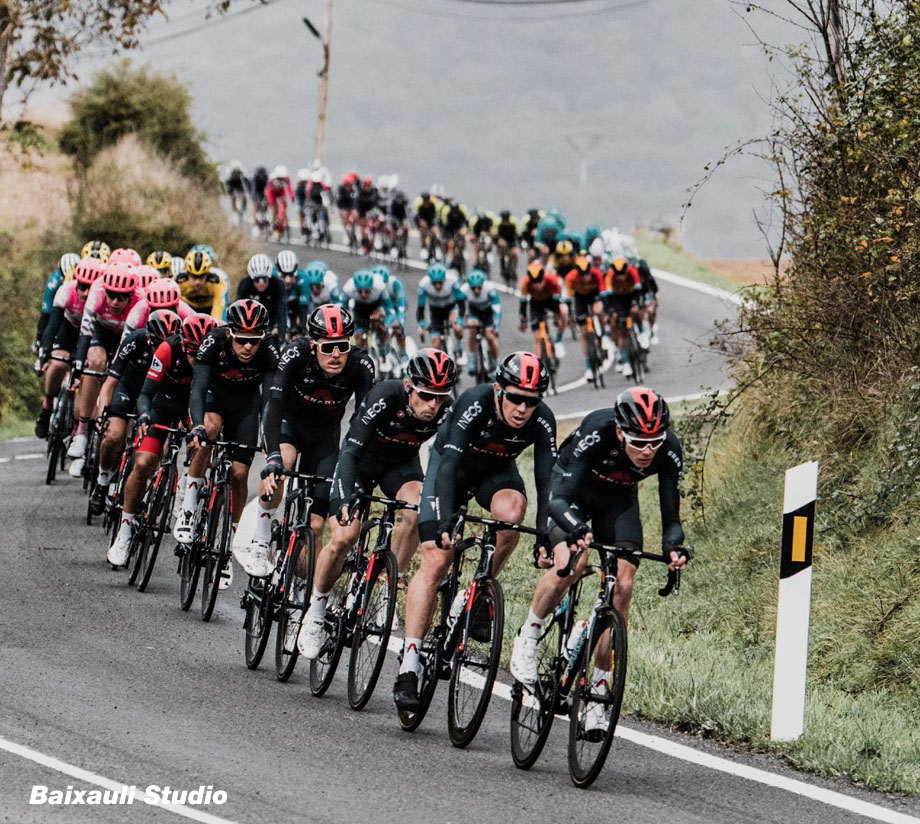 Vuelta debutant Ide Schelling went on the attack, but it was Michael Woods who managed to make a decisive gap 3 kilometres from the top. The EF Pro Cycling Canadian rode away from his opponents to the top the climb with about 20 seconds in hand. The problem for Woods was that he had to compete against four counter-attackers. 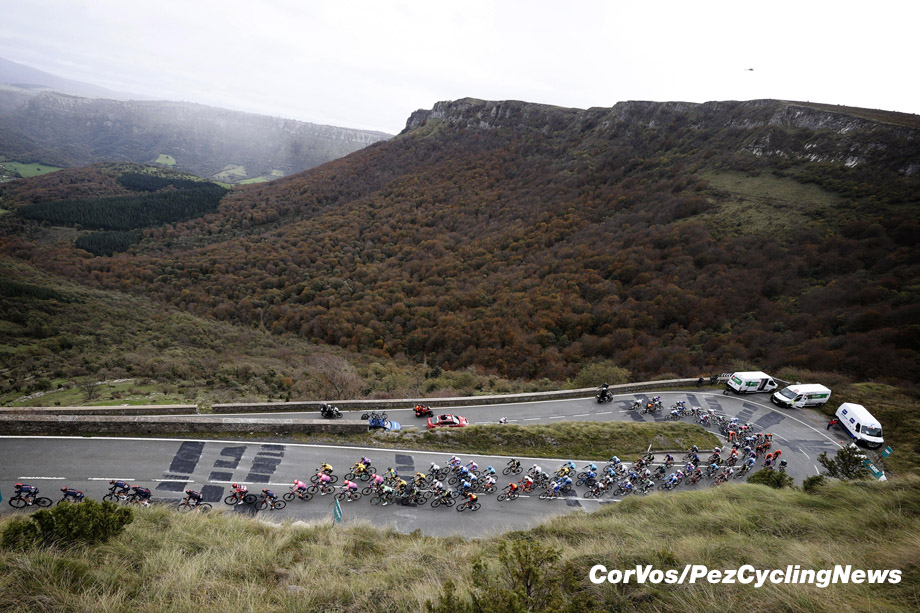 In the chasing group, Valverde, Guillaume Martin, Nans Peters and Omar Fraile turned out to have the best climbing legs and these four managed to pull back woods on the descent of the Orduña. We started with five leaders in the last 10 kilometres, although a chasing group (including the Jumbo-Visma men Kuss and Bennett) was not far off. The difference between both groups at one point was 15 seconds. 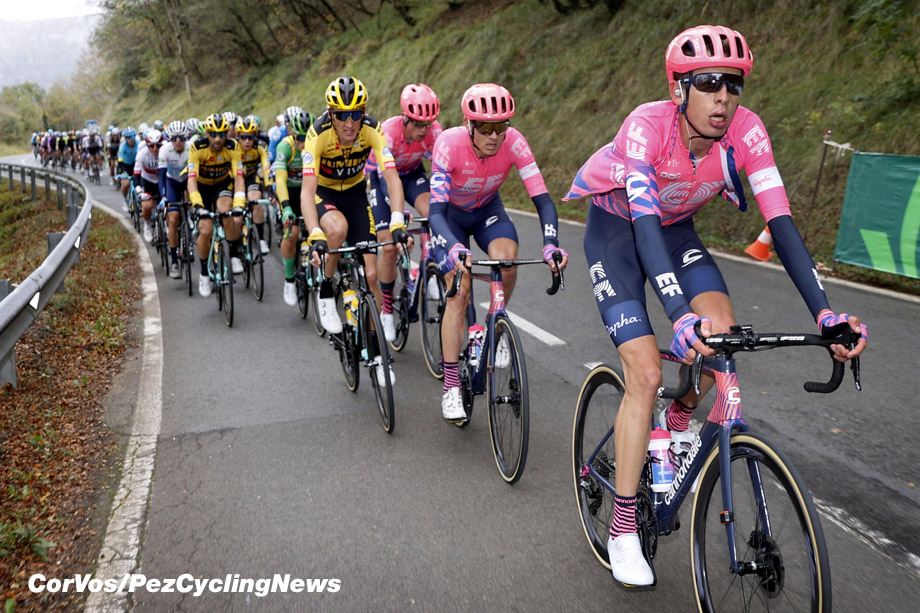 Second overall, Hugh Carthy, was always near the front

At the front the co-operation was a bit lost and there were attacks from Martin, Peters and Valverde, but the riders shadowed each other’s movements. At 6 kilometres from the finish there a new attack from Valverde and this time the experienced old hand managed to make a small gap. The Spaniard looked good for a moment, but Peters was the man who got to Valverde’s wheel. 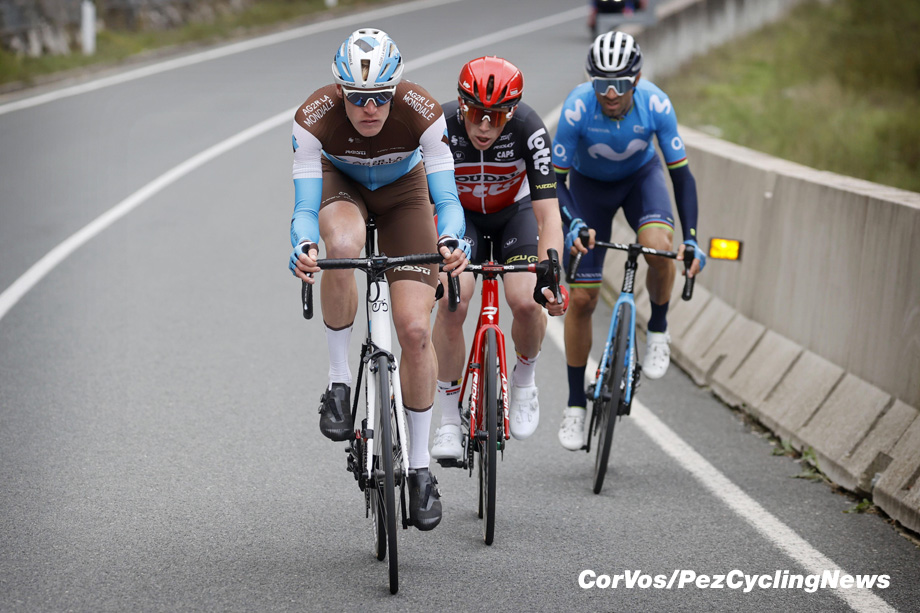 With 3 kilometres to go, the five front riders looked at each other again, but the chasers were at 20 seconds. Fraile was the next rider with an all-or-nothing attempt, and the Spaniard was pulling away with Woods, but Valverde had enough left to close the gap. The Spaniard no longer had an answer to Woods last acceleration. 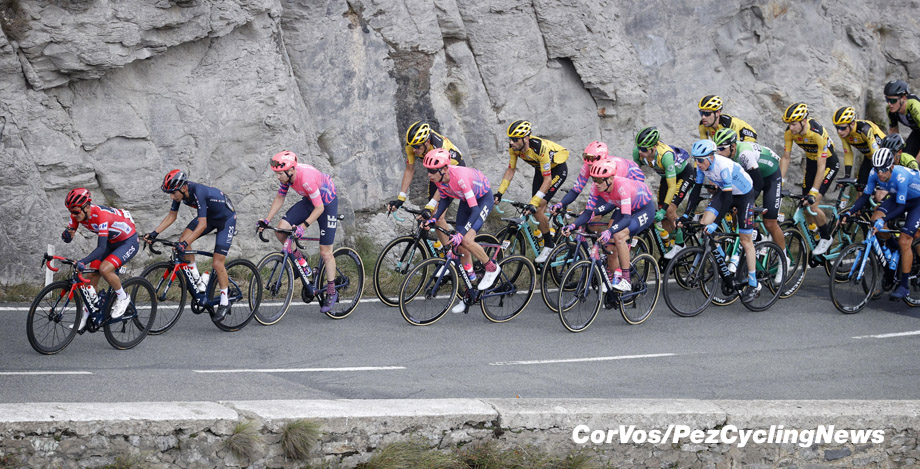 The strong wind held the peloton together

The EF Pro Cycling rider took advantage of a moment of relaxation just before the last kilometre, and went full steam ahead and was the first to cross the finish line. For Woods it is his second victory in the Vuelta, after he was the best at Balcón de Bizkaia two years ago. Fraile and Valverde had to settle for second and third. 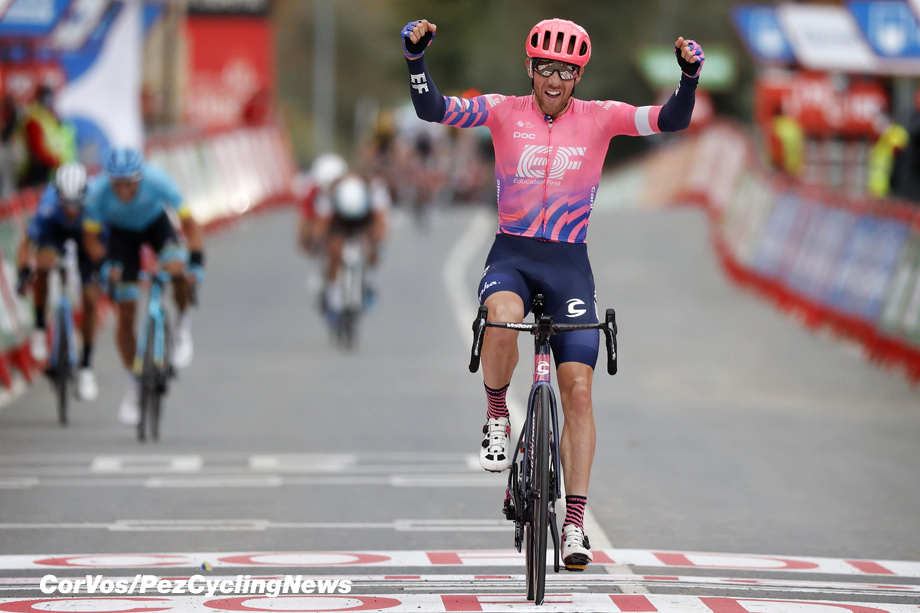 Stage winner, Michael Woods (EF Pro Cycling): “It was a special day and it’s amazing to race in the Basque country. I got rid of the four other guys. They were riding super strong. I felt bad I couldn’t pull through with them but with Valverde in the group I couldn’t because we had Hugh Carthy in the peloton. I was able to sit. And then I had the legs and I went for the win! Initially I wasn’t supposed to be in the break however the race got so crazy and the group was the big I had to make sure we had numbers in it. We’ll celebrate this one and then I’ll look at the race book.” 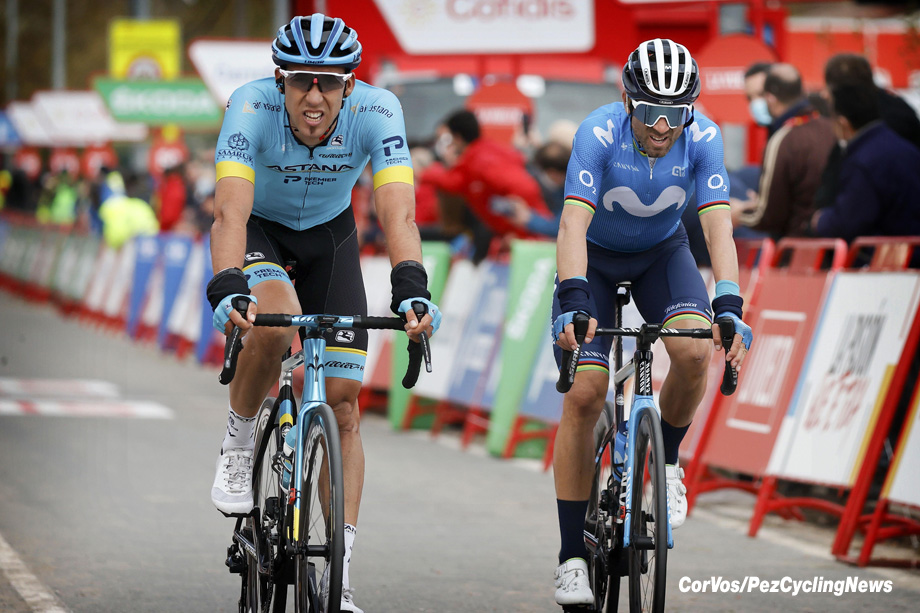 Overall leader, Richard Carapaz (INEOS Grenadiers): “It’s been a very fast stage, from the start and also afterwards. We spent a lot of energy today. I think we kept the situation under control, we tried to stay calm and we knew things were not too dangerous with the finale. We tried to keep the breakaway under control and I think we finished with a good gap. It’s been incredible, the team was up to the task, we defended the jersey like we had to and the boys did a spectacular job.”

# Keep it PEZ for everything Vuelta. #