Roglič and Carapaz fight it out

Vuelta Stage Report: At the end of a man-against-man battle between the red jersey, Richard Carapaz (INEOS Grenadiers) and the green jersey of Primoz Roglič (Jumbo-Visma), it was the Slovenian who crossed the line first at the summit of the Alto de Moncalvillo. Carapaz held the overall lead, but now only has 13 seconds on Roglič. 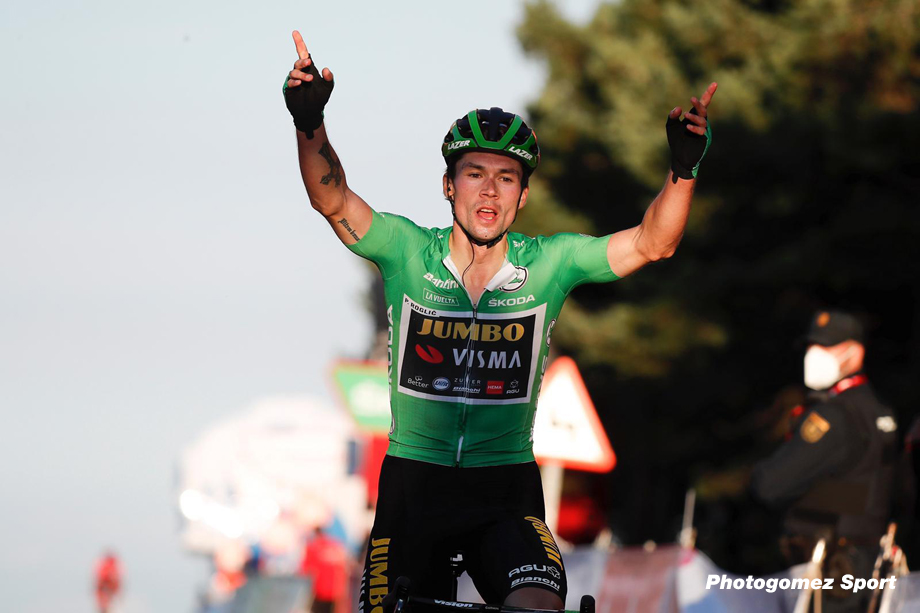 A stunning win from Roglič and time pulled back on Carapaz

Primož Roglič has added the eighth stage of the Vuelta a España to his palmarès. After an exciting duel with Richard Carapaz, the Slovenian was the best on the Alto de Moncalvillo. He is now 13 seconds off the Ecuadorian in the battle for the red jersey. 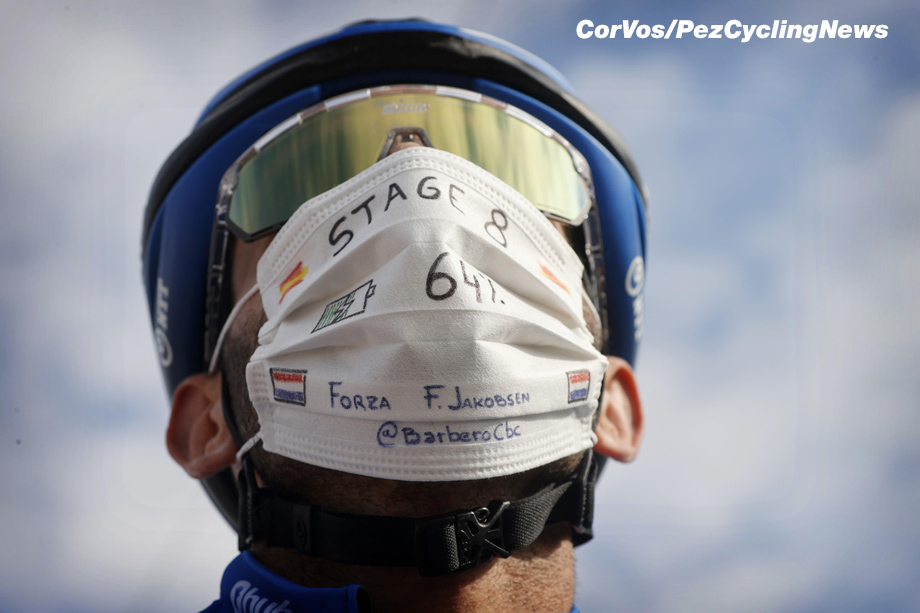 Stage 8. Logroño > Alto de Moncalvillo – 164 km
Week 2 of La Vuelta 2020 started with a bang and it continues with an unprecedented summit finish atop Alto de Moncalvillo: 8.3km with an average of 9.2% and a maximum gradient of 15%!

Fernando Escartín’s Comment: “The first, primarily flat, part will take place among the Logroño vineyards. The climb of the La Rasa mountain pass (2nd category) will wear the riders down, but the unprecedented finale will be decided in the Alto de Moncalvillo, an impressive, demanding mountain pass that is much harder than it looks: extensive, with inclinations between 8-9% and three final kilometres between 13-14%. At this point in La Vuelta any time lost could be crucial in the general classification.”

The roll out from Logroño

Primož Roglič, 4th overall this morning, had to do without Tom Dumoulin, due to him suffering from increasing fatigue. Richard Carapaz, the leader in the Spanish Tour since Sunday, also lost a teammate; Michał Golas. The Pole had to return home quickly for family reasons. Trek-Segafredo rider Kenny Elissonde was also not at the start line.

Early on, a lively battle broke out for the break of the day, which resulted in a split with seven men: Robert Stannard and Stan Dewulf joined forces with Rémi Cavagna, Rui Costa, Benjamin Dyball, Julien Simon and Ángel Madrazo. They were allowed to take 5 minutes. Behind; the teammates of Carapaz set the pace in the long run-up to the Puerto de la Rasa, the first climb after 104 kilometres. The leading group reached the foot of this climb 5 minutes ahead of the peloton, while the couple Jhojan García and Héctor Sáez of Caja Rural-Seguros RGA tried in vain to make the jump to the break. The Spanish team had missed the boat. 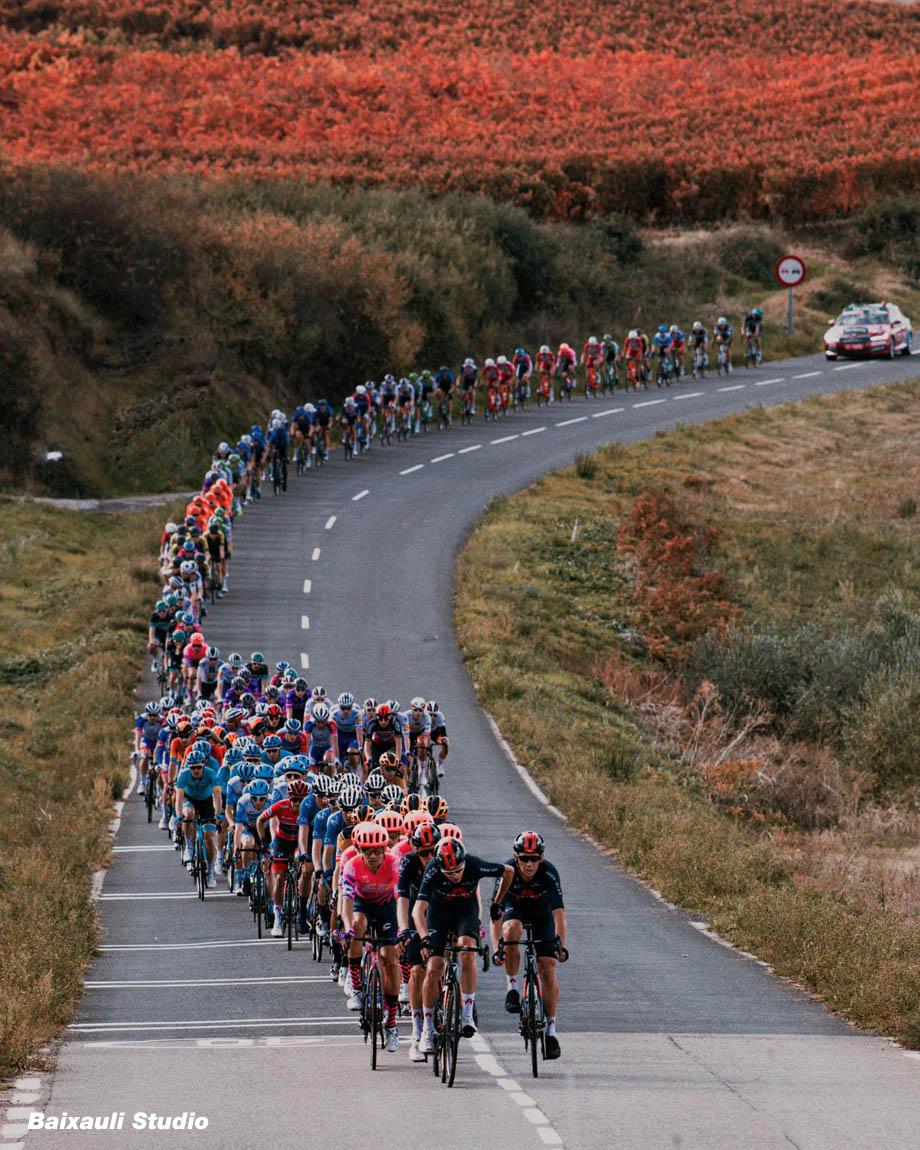 The peloton led by INEOS Grenadiers

As soon as the road started to rise, the Movistar team of Enric Mas, Marc Soler and Alejandro Valverde suddenly appeared at the front. Imanol Erviti and Carlos Verona rode at a fast pace and their efforts reduced the lead of the seven escapees. At the summit of the Puerto de la Rasa after 113.8 kilometres, Cavagna was first, the difference was reduced to about 2:30. 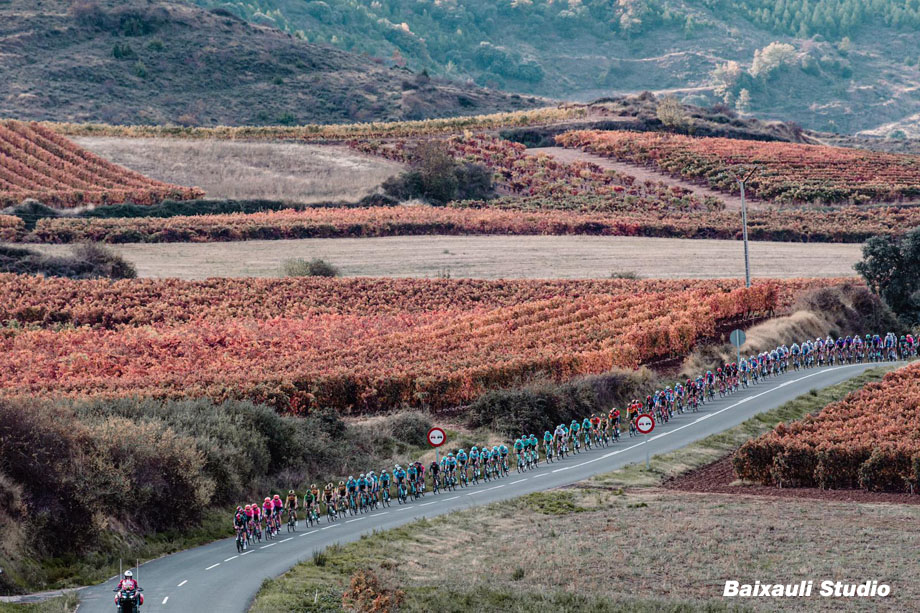 After 126 kilometres, Movistar accelerated again, causing the peloton to split. A group of about 40 riders broke free in the run-up to the foot of the Alto de Moncalvillo. The work of the Movistar team at the same time ensured that the difference with the leading group quickly decreased. Madrazo, who wore the mountain jersey for fourteen days last year, was the first to be dropped from the front group. 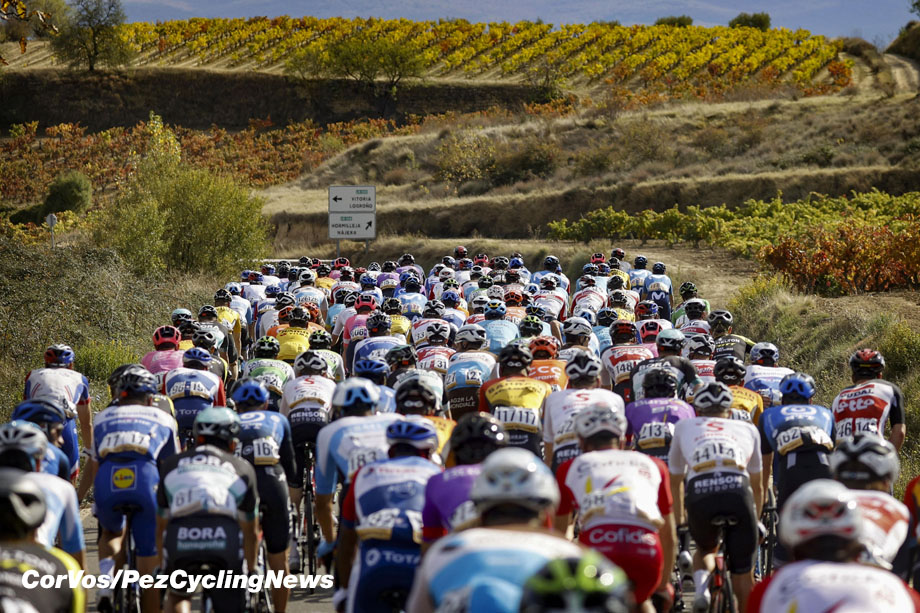 Nice wine in these parts

In the last kilometres to the foot of the Alto de Moncalvillo, it was all over for the other escapees; Dewulf and Dyball were the last to be caught. Movistar led the group of favourites at the start of the final climb. With 6.5 kilometres left, Alejandro Valverde opened the action, but the ex World champion was brought back by Andrey Amador and Robert Gesink for Carapaz and Roglič. 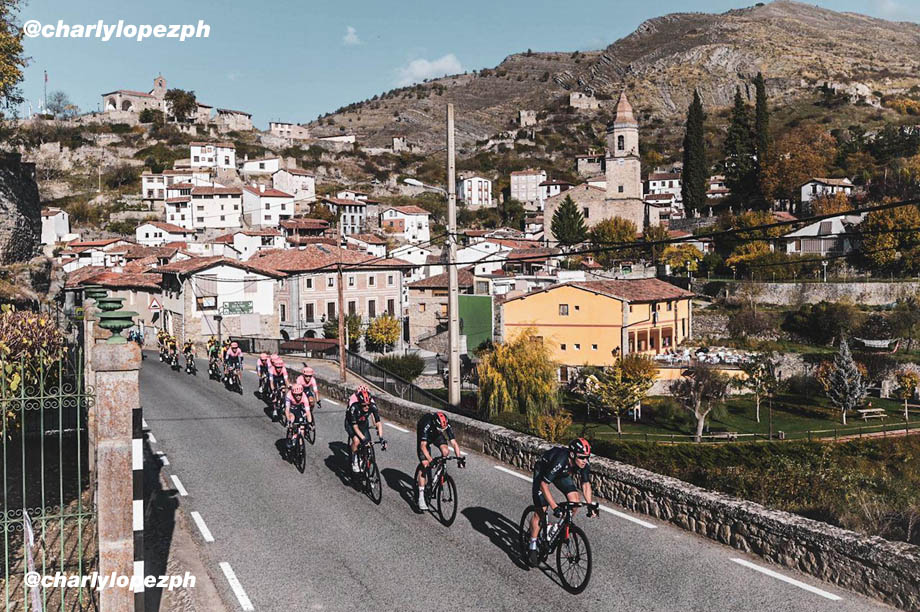 Through the village of Soto en Cameros

Five kilometres from the line, Michael Woods took over the initiative for his teammate Hugh Carthy, second overall. In the wake of the EF couple, Roglič with Sepp Kuss and George Bennett was still close. Woods’ pace led to Felix Großschartner (sixth), Soler (seventh) and Valverde (ninth) to be distanced. At 3.6 kilometres out, Carthy accelerated and Kuss jumped with the Briton. 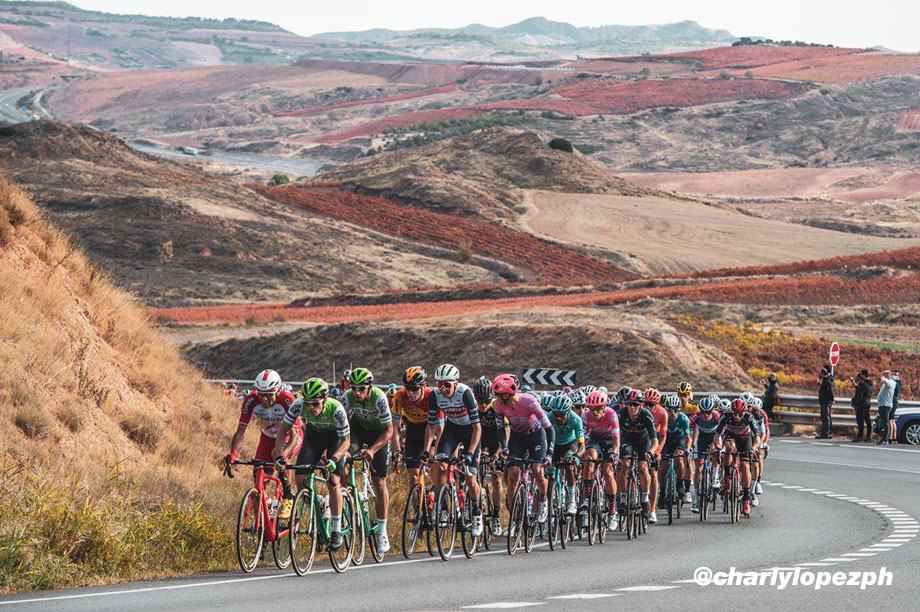 A bit of climbing today

While Dan Martin tried to cross to Carthy and Kuss, Chaves (eighth) also dropped out of the favourites group. Martin was again caught up by Carapaz, who saw his red jersey was in trouble. On the steep last 3 kilometres, the Ecuadorian closed the gap to the two attackers. Kuss then tried to race on alone, but Carapaz jumped after him and took Roglič. 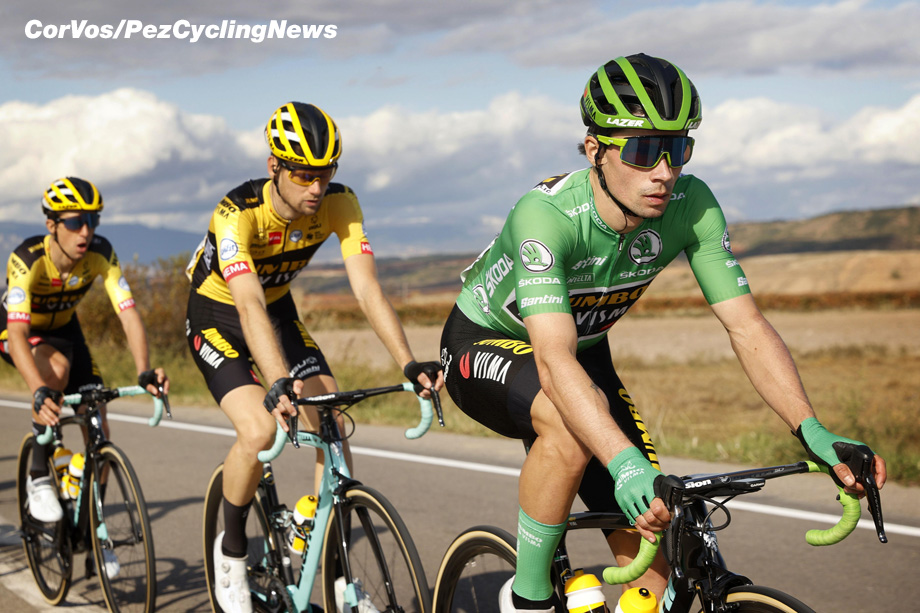 In the last 2 kilometres, Carthy, Martin and Aleksandr Vlasov were able to join Carapaz and Roglič. At a kilometre and a half from the finish, Vlasov, who had already lost over 6 minutes in the first week, took his chance and went on a solo hunt for victory. With more than a kilometre to go Roglič raced to Vlasov in one go and went over the Russian. Carapaz managed to grab the rear wheel of his Slovenian again. 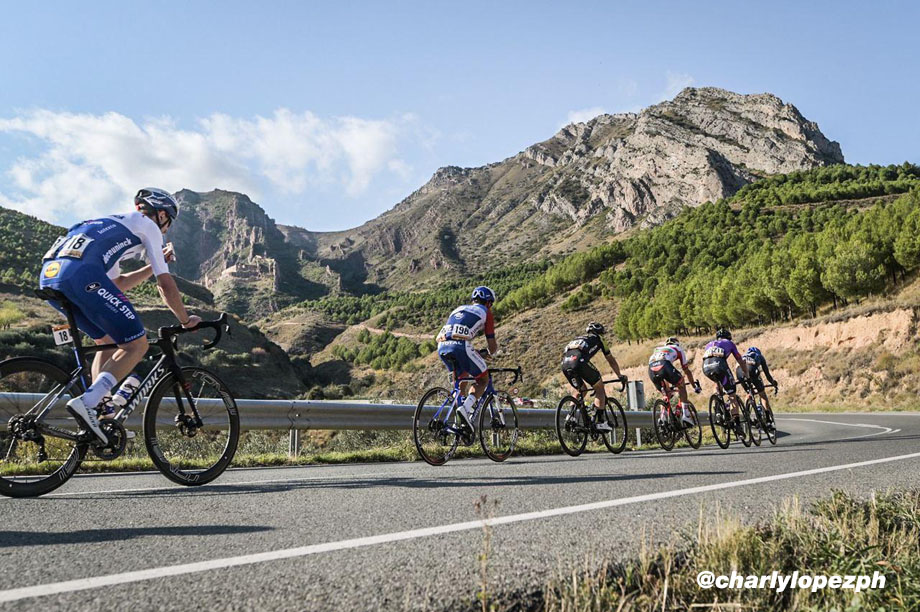 Carapaz and Roglič accelerated, but an attack by the Slovenian eight hundred metres from the finish was decisive. For a moment Carapaz looked to be able to come back, but Roglič turned out to be strong enough to take the victory. Including the ten bonus seconds, he took 23 seconds back in the battle for the red jersey, which remained on Carapaz’s shoulders. The Ecuadorian crossed the line second, Martin third. 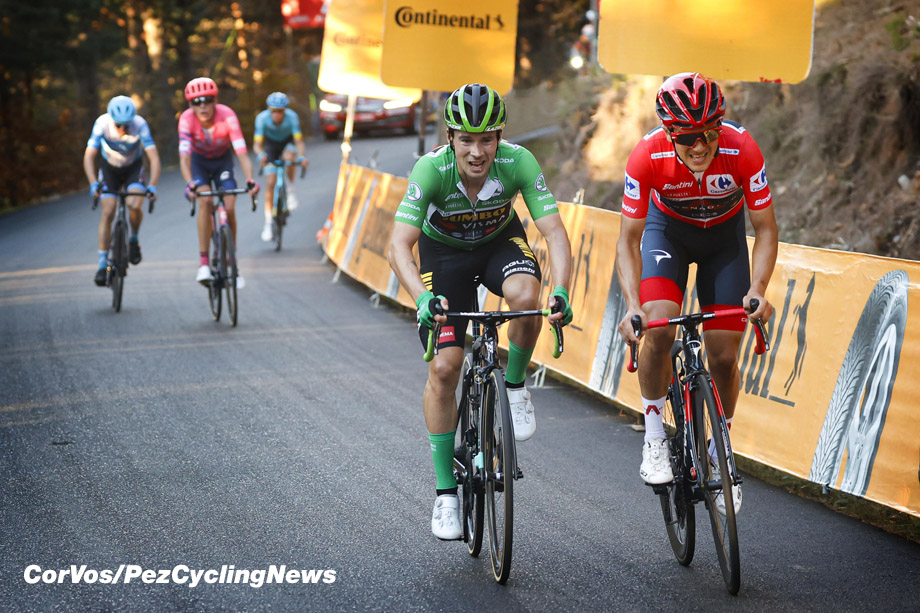 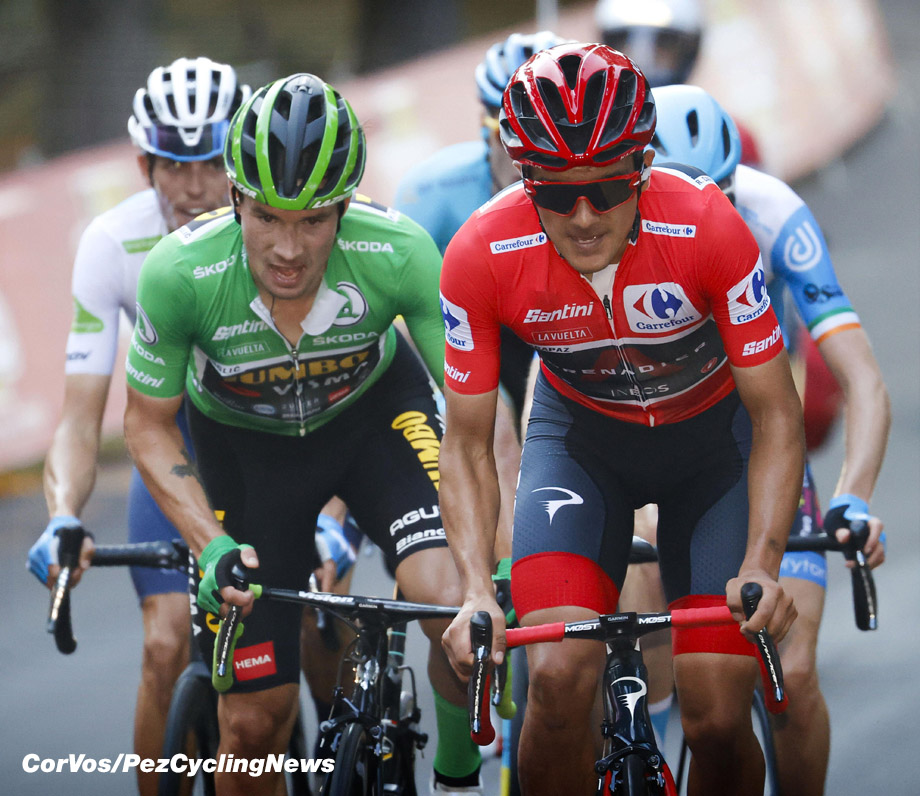 And Roglič returned the compliment

Roglič and Carthy changed places in the standings. The Slovenian is now second, the Brit is the new fourth. Due to Soler’s loss of time, Chaves and Valverde moved up one place. Wout Poels climbed three places and now occupies 10th position. 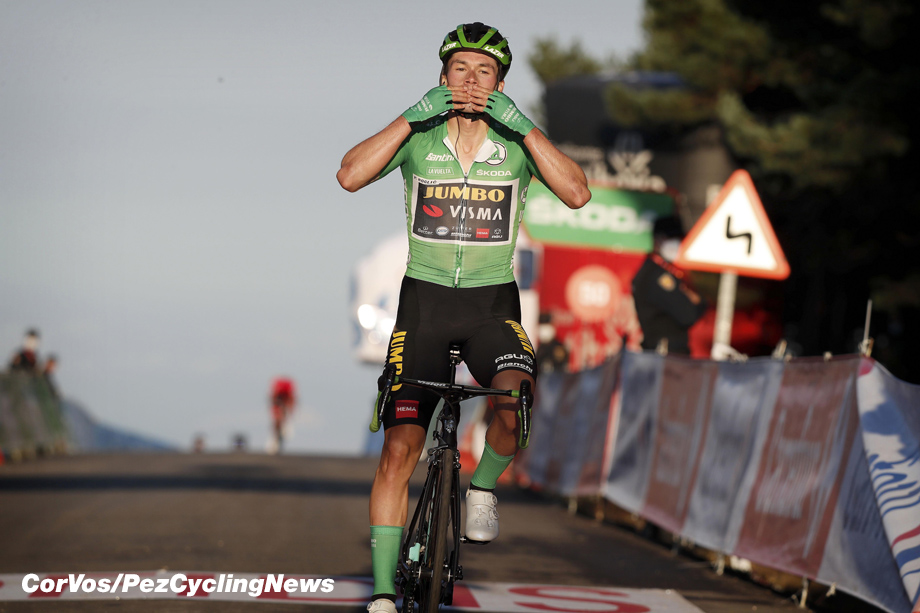 The stage win and time back – Top day for Riglič

Stage winner, points leader and 2nd overall, Primoz Roglič (Jumbo-Visma): “It was a boring slow start but then the pace went up and it was super hard and fast after the second last climb. It was the fist time in my life I did the last climb, I didn’t know it except from what I could see on the profile. It was a hard climb but when you have an opportunity, you have to go. I was going with my feelings. I always like to win. So if there’s an opportunity, I take it. Luckily I had the legs and I’m happy to win. It’s also nice to get some time back but most of all it’s just nice to win the race.” 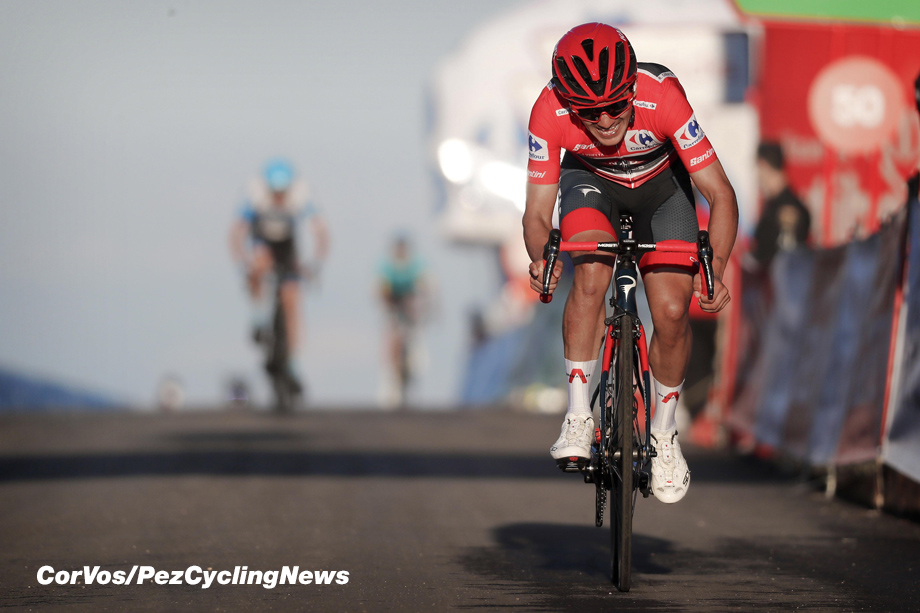 The battle isn’t over for Richard Carapaz

Overall leader, Richard Carapaz (INEOS Grenadiers): “It’s been a very animated stage and we’ve seen a strong Roglic, but we’re still in the fight. The truth is this duel has been quite nice and it motivates me because it makes it more for an exciting race, mostly for the fans but also for us with the level we’re riding at. It seems like we have a couple of easier days ahead of us but we’re racing and we don’t know what’s coming.”