Vuelta Stage Report: After the efforts of the last two stages, the peloton was glad of a ‘sprinter’s day’ to rest-up before the tough weekend and l’Angliru on Sunday. At the line in Aguilar de Campo, Sam Bennett (Deceuninck – Quick-Step) who was too fast for Pascal Ackermann (BORA-hansgrohe) and Gerben Thijssen (Lotto Soudal), but the judges decided that Bennett had tangled with Emīls Liepiņš. The GC overall stayed the same. 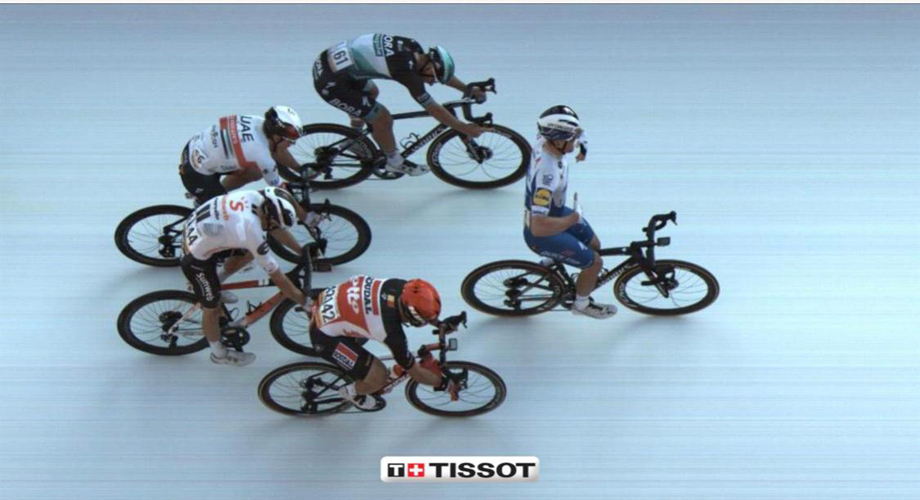 Pascal Ackermann took his first stage victory in the Vuelta a España. The BORA-hansgrohe German crossed the line second in Aguilar de Campoo, but benefited from the declassing of Sam Bennett. It appeared that just before the final sprint, the Irishman gave Emīls Liepiņš a shoulder push twice. 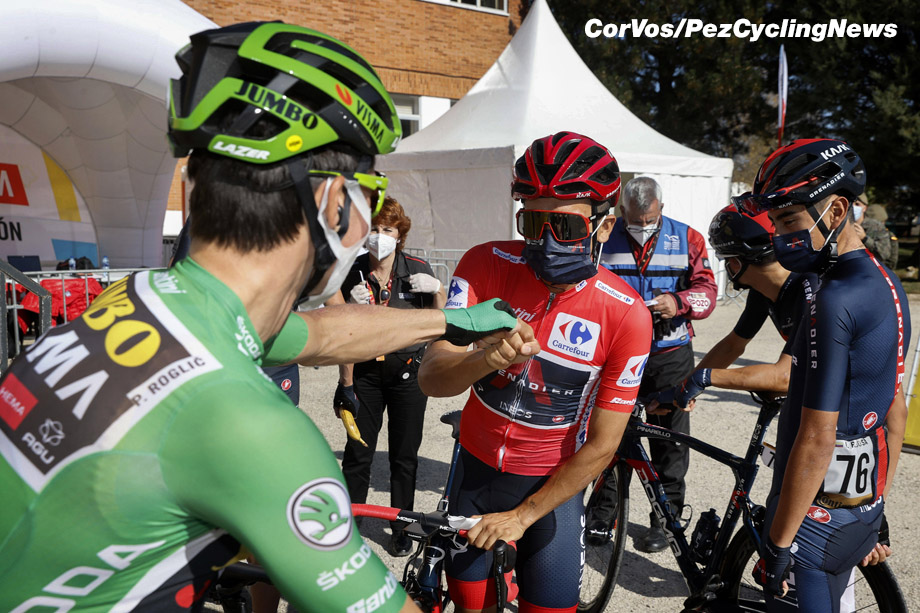 The two top men on GC – Carapaz and Roglič

Stage 9. B.M. Cid Campeador. Castrillo del Val > Aguilar de Campoo – 157,7km
An opportunity for the sprinters? On the day after an unprecedented summit finish atop Alto de Moncalvillo, the peloton head for Aguilar de Campoo on mostly flat roads, with no categorised climb. But the wind could play its part.

Fernando Escartín’s Comment: “Completely flat stage with a final circuit around Aguilar de Campoo. All signs point to a sprint to the finish-line which will put the sprinter teams in control of the day’s pace. Those teams that have yet to obtain a victory will have the opportunity to try and do so.” 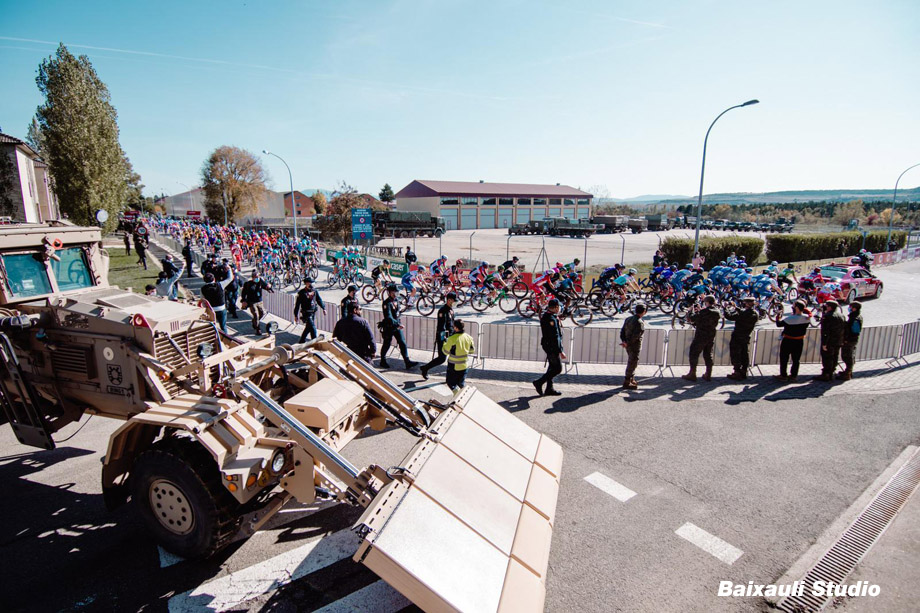 The only fans at the start were the army

After a number of days of tough climbing, the fast-finishers had one of their few days on the ninth stage. Sprint opportunities are scarce in the 2020 Vuelta a España, but this stage through Castile y Léon was on paper an opportunity for men like Sam Bennett, Pascal Ackermann and Jasper Philipsen. The ride to Aguilar de Campoo was the flattest so far with only a thousand metres of climbing. 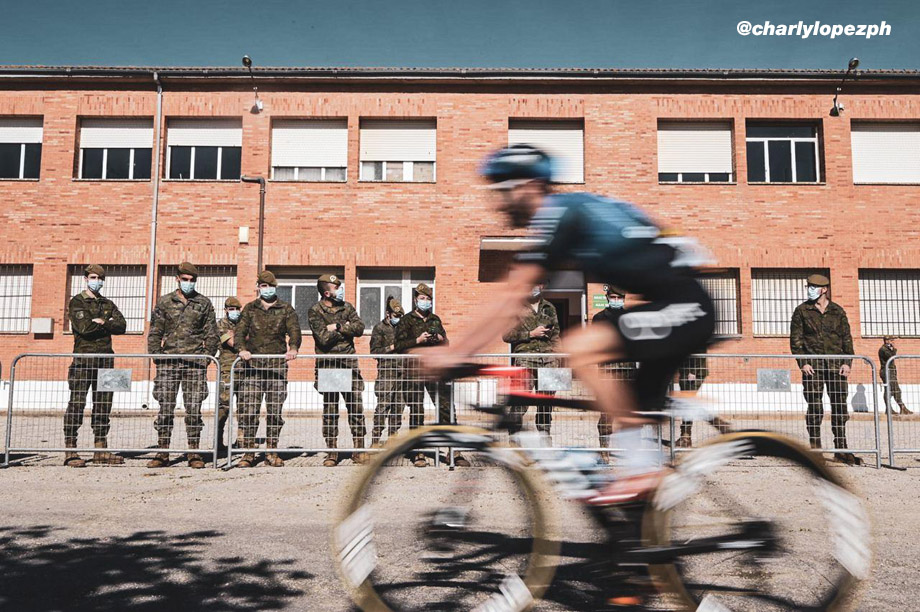 The race started from the military base – Cid Campeador. Castrillo del Val 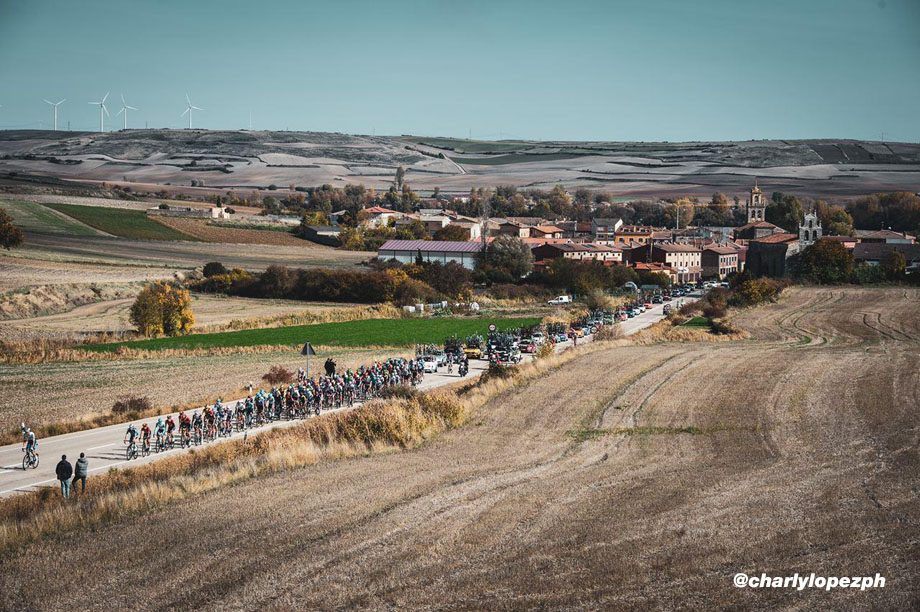 One of the few flat stages

It is not easy to get on the right escape in this Vuelta, but today few riders wanted to spend a whole day out front of the peloton. And so it was up to the Spanish ProConti teams to take in the nice weather on the road to Aguilar de Campoo. The early breakaway consisted of two riders, one each from Caja Rural-Seguros RGA and Burgos-BH. Aritz Bagües and Juan Felipe Osorio managed to gain a maximum lead of more than 5 minutes. 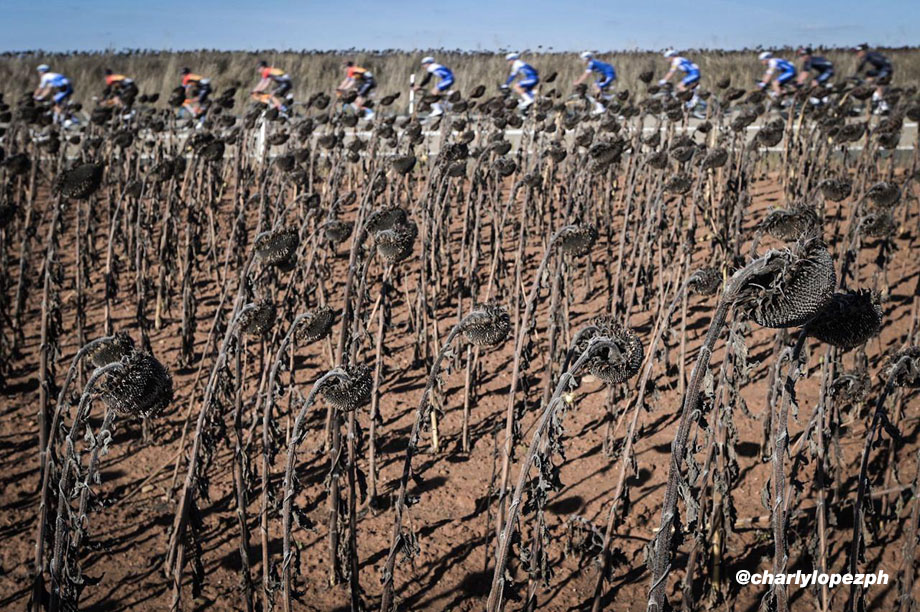 A bit late in the year for sunflowers 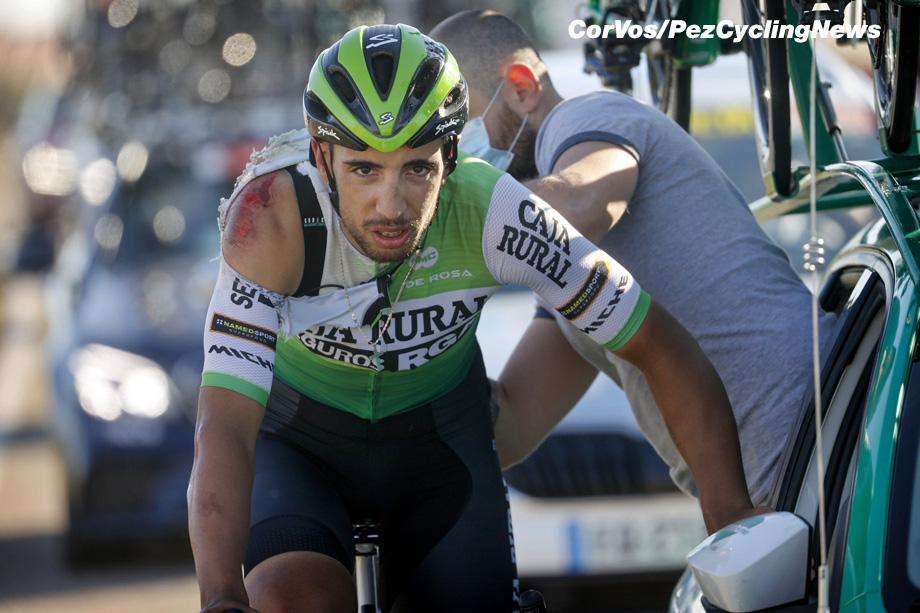 The peloton took it easy and we saw the teams of Sam Bennett (Deceuninck – Quick-Step) and Jasper Philipsen (UAE Team Emirates) controlling everything. More than a 100 kilometres from the finish, there was a crash including Pascal Ackermann and Hector Sáez. The Spaniard received medical assistance and looked in a bad way, but the brave Sáez decided to continue and was soon back in the pack. 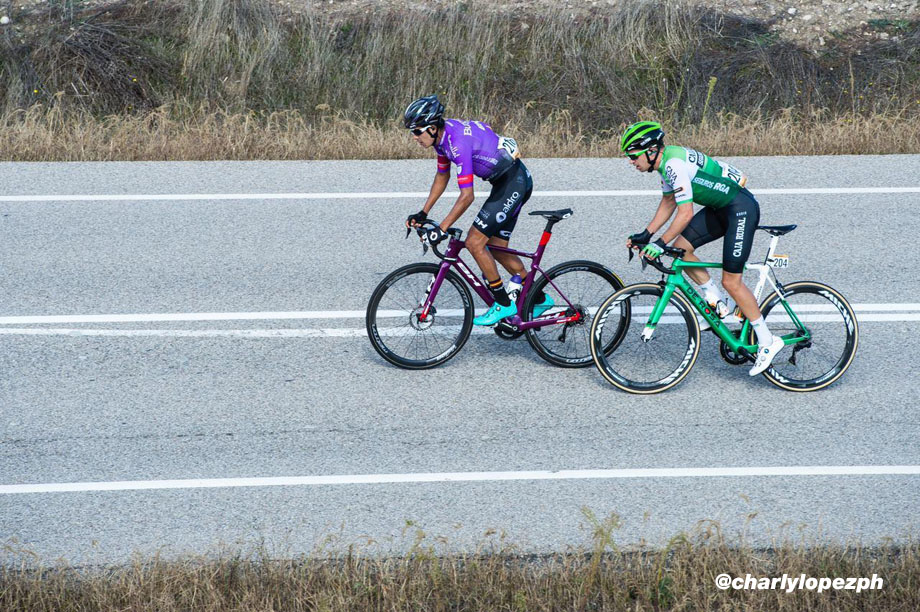 The break of the day – No chance

It was a memorable day for three Vuelta participants, as Primož Roglič (31), Martin Salmon (23) and Emīls Liepiņš (28) had their birthdays. Although these riders were unlikely to contest for the stage victory. With 70 kilometres to go, the difference between the front riders and the peloton was 3 minutes. 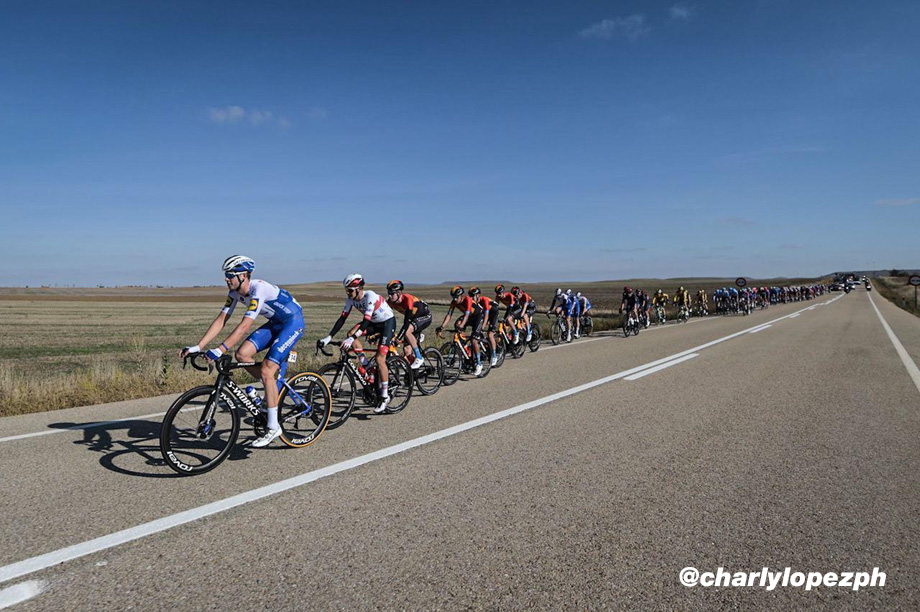 The peloton was not in a big hurry

With a good 40 kilometres to go, the GC teams came to the fore, as the riders entered open county-side, the favourites for overall victory were afraid of any splits. At 36 kilometres from the line, Bagües and Osorio were the first to cross the finish line in Aguilar de Campoo and started a big local circuit. 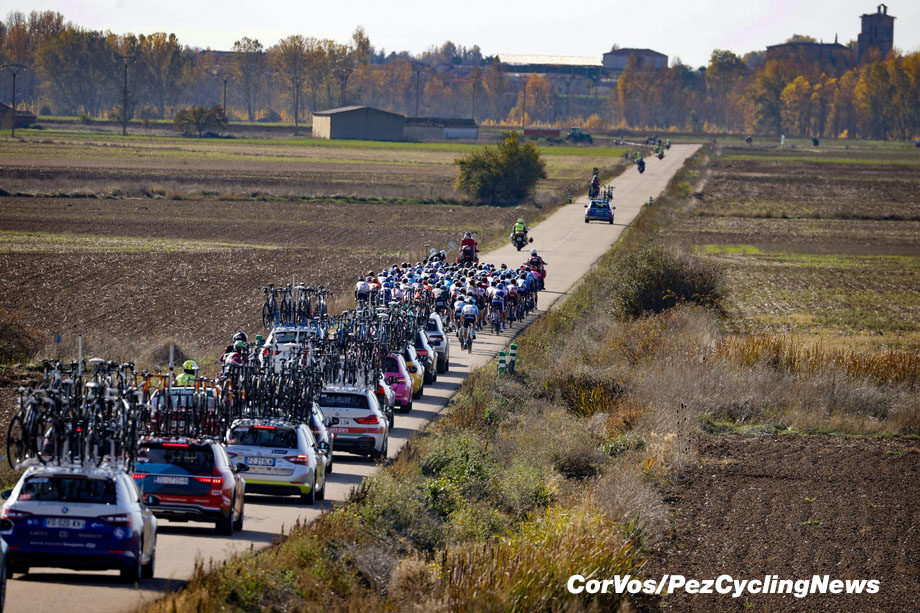 The lead group had now dropped to 1 minute and at 22 kilometres out, it was all over for the two in the break. In the finalé, the different teams held each other in a stranglehold, probably because the wind was not good for forming echelons. Everyone was ready for the mass sprint in the streets of Aguilar de Campoo. 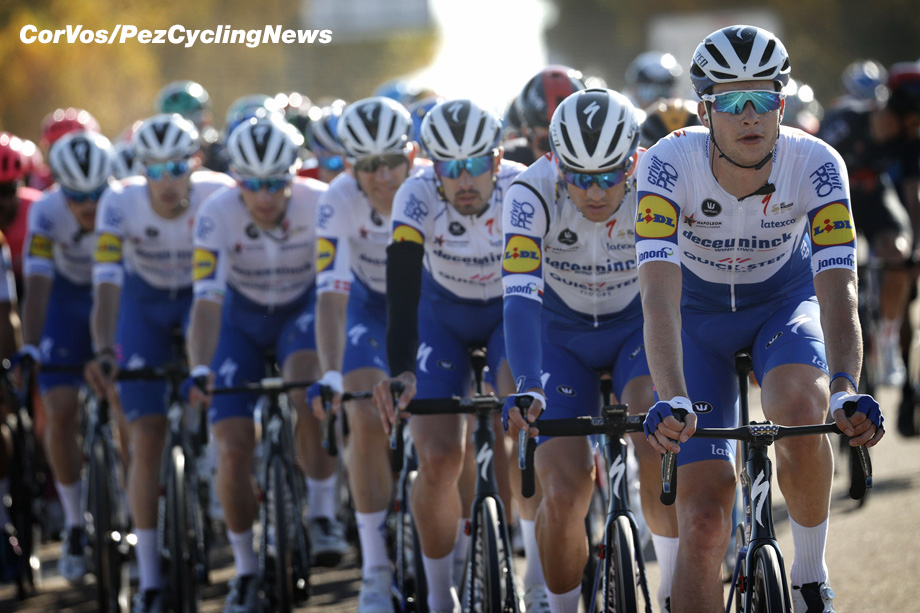 At 12 kilometres from the finish, there was some panic in the team car of the birthday boy’s Roglič, but after a bike change for the second placed on GC, there was no panic and he didn’t have to make much effort to return to the peloton. In the final it was again a fight between the different sprint trains. BORA-hansgrohe tried to pilot Pascal Ackermann to victory, but in the sprint the German turned out to be no match for Bennett. 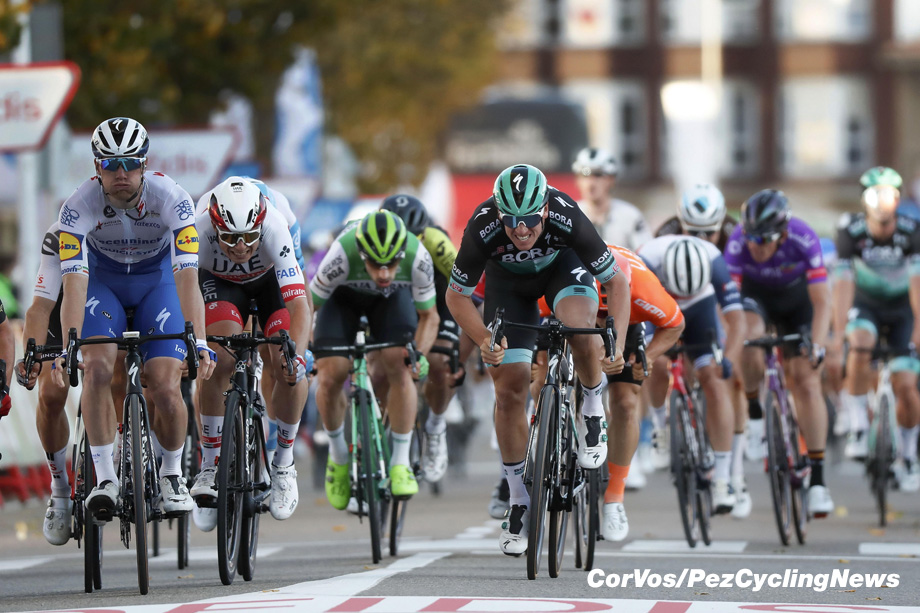 Bennett won by nearly a bike length, but…

Afterwards, Bennett was giving his winner’s interview, but the jury was already watching the television images. In the last kilometre you could see that Bennett gave Liepiņš a hefty shoulder push. The jurors eventually concluded that this was not correct and so Bennett was declassified. Ackermann moved up to the winner’s spot. 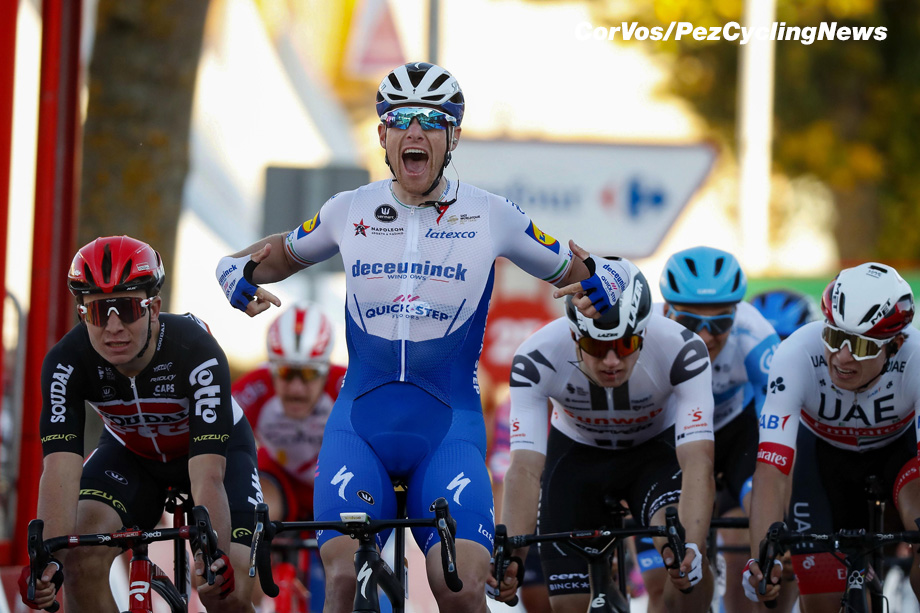 Should have been Vuelta’20 second stage win for Bennett

Stage winner, Pascal Ackermann (Bora-Hansgrohe): “I didn’t expect to win because Sam [Bennett] was ahead but when I saw the video, it wasn’t a fair action from him. After all the crashes of the last weeks, we have to take care of the other guys. If there is no hole, we have to stop. I feel sorry for Sam but I totally understand we have to ride in a more fair way. I’m really happy about this victory. My team did an amazing job today and I’m happy to give something back. Last time, we paid too much attention to Quick Step so this time we did our own thing and I’m really really happy we did it. I was really disappointed last time, we had so much bad luck in the last weeks and now we make it.” 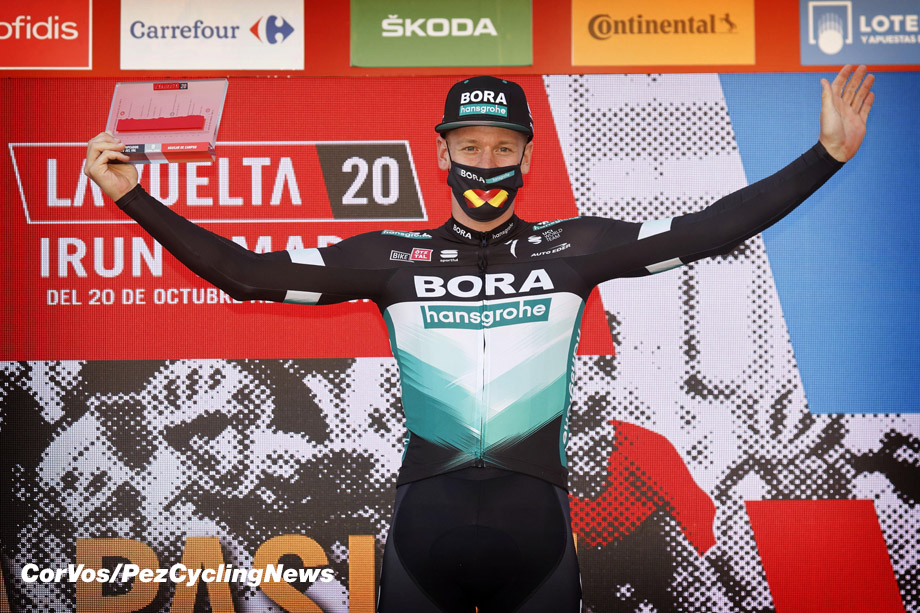 Overall leader, Richard Carapaz (INEOS Grenadiers): “We knew the finale was a bit dangerous. We had seen the finish a first time and we wanted to be in a good position not to take any chance. In the end, it was quite an easy day. We expected it to be more nervous.”

UCI Statement: “UCI Commissaires’ Panel relegated rider Sam Bennett (Deceunick–Quick-Step) for shouldering off another rider at 500m to go of the 9th stage of La Vuelta. The decision, taken unanimously, was based on television footage and taken as per article 2.12.007 of UCI Regulations sanctioning “deviation from the chosen line or irregular sprint”. Both the rider and the team’s Sports Director have been heard by the Panel.”

# Friday could be a day for a break or another sprinter’s day before the tough weekend – Keep it PEZ. #